Carl C. drops me off at SFO for my 1:35 AM flight. The 13 hour flight goes by reasonably quickly; my new inflatable neck pillow is a success, the noise-canceling headphones less so. I don't sleep, but have a daydream in which the engine noise becomes the howling of a post-apocalyptic hurricane.

I land in Taipei at 6:30 AM, change $100, and locate the driver of the limo sent by Academia Sinica. The ride to A.S. takes an hour. The driver offers me a bag of candy or something, and I take a small packet from it and tear it open. It's some kind of powder - maybe an exotic Taiwanese fruit flavor that will explode in my mouth! But when I empty the packet into my mouth there's an unexpected dry feeling, and simultaneously I notice the word 'Dessicant' on the packet. I spew it discreetly onto the floor, and wash the taste away with the actual item: gum.

Taipei sits in a basin ringed with steep jungle-covered hills; the A.S. campus is at the base of one. I check into the guest house, which is a nice hotel. The staff is very accommodating when I ask to switch rooms due to a noisy ventilation unit.

I meet Nicolas, Francois, and Ben in the cafe. We set up in the conference room and meet Kiwi and Felix Lee, sharp computer guys. Later, Francois and I explore the hills a little. One path dead-ends at a house with inhospitable occupants. Another, under construction, ends at a pagoda. We try to continue but the jungle is dense and full of spider webs.

I eat dinner at the guest house's student dining hall, which is extremely cheap and features free soup in a giant drum. In my room, as always, I seek sports on TV. There are lots of local baseball games; each team has one or two American players. There's a peculiar obsession with the NY Yankees; one station shows their games in replay day and night.

First day of workshop. Daniel, Josef, Ana and Derrick are here too. Attendance is a little sparse but OK. The local organizers - physicist Simon L. and his assistants Vicky, Stella and Jillavisia - are fantastic in all respects. At lunch I meet Sam, an avid hiker who recommends '7-Star Mountain' as a day hike.

The workshop banquet is held at a fancy hotel downtown. Very lavish, but unfortunately my stomach hurts and I don't eat much.

Workshop concludes. All the demos (including mine) have technical glitches, but we recover for the most part.

The post-workshop dinner is at a 'Tea House' in the nearby hills. All the dishes involve tea and local ingredients, and are unusual and delicious. More and more dishes arrive, culminating in a whole fish in orange sauce with pieces of Chinese doughnut - mmm mmm! Easily the most enjoyable meal I've had in the last decade. Afterwards the hostess prepares extra-special tea in an elaborate ritual. It has an interesting buttery flavor; I drink quite a bit and feel good all over. On the ride back I pretend that the tea is an aphrodisiac and I have my eye on Ben; this gets a big laugh.

Simon touts the biological and cultural diversity of Taiwan, and I for one am very taken with the place, and wish I had more time to explore it on this trip.

At bedtime, there's a mosquito in my room, but I can't locate and kill it.

Sure enough, the mosquito wakes me up at 3:30 AM and I neither kill it nor get back to sleep.

At 7 AM Francois, Ben, Derrick, Nicolas and I board a van to the airport. At the airline counter we're told that we've been bumped and will have to go via Macau, but Francois puts on a very impressive display of indignation and outrage (WE ARE SCIENTISTS, NOT TOURISTS!) et voila! we get on after all. A less fortunate Chinese woman sits and spews venom to no one in particular.

The Beijing airport is glossy and vast - part of their big Olympics display. Francois goes home, and a van takes the rest of us to the IHEP guest house. We take the subway to Tienanmen Square. 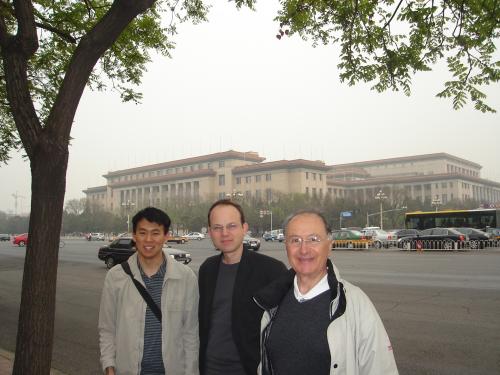 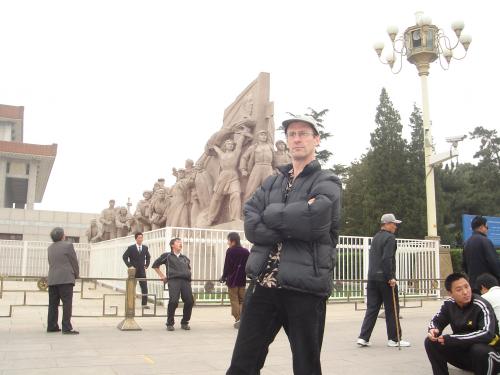 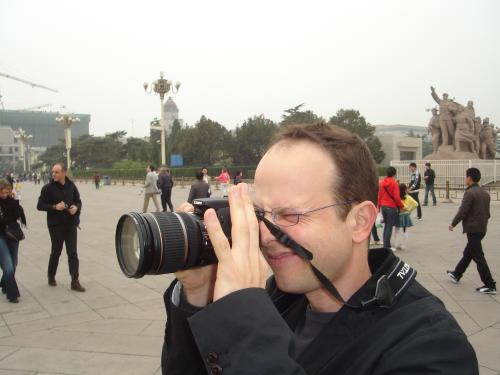 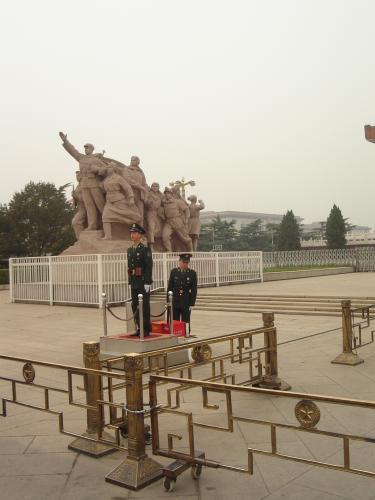 There are lots of thin soldiers with excellent posture

We spot and surreptitiously photograph a British tourist with a huge gut, a rolling waddle, a fat cigar, and an air of supreme self-satisfaction. A video is here. 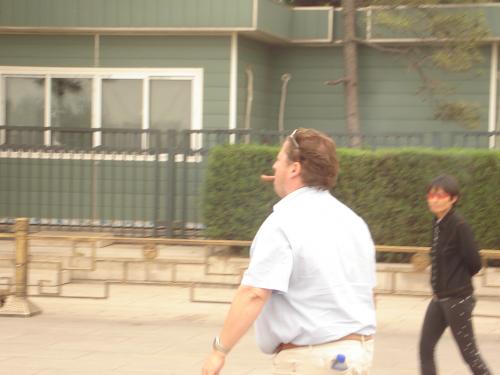 This doesn't capture his obscene essence

We try to synchronize with Francois via SMS to meet at a Peking duck restaurant, but his directions are bad and we end up hanging out with some street vendors; Nicolas buys a Chairman Mao watch with a hand that waves up and down every second. 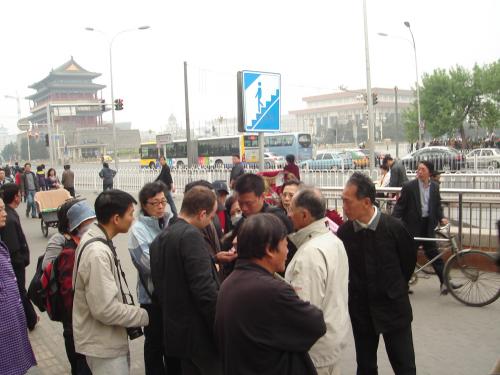 We finally hook up with Francois/Sara/kids and go in tricycle-taxis to the restaurant, a hole-in-the-wall on the aptly-named Roast Duck Road. Francois has ordered 3 ducks and there's an extravagant amount of food. 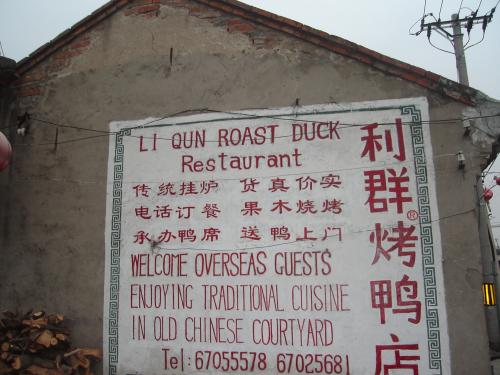 We navigate back on the subway thanks to Ben's recollection of Fuxingmen station.

Impressions of China: The Communist party is a quasi-aristocracy, hanging onto power by censorship and repression, but also by trying to keep the masses reasonably happy. (On balance, maybe this isn't such a bad system.) Party members drive black high-end cars (Audi, Mercedes, Passat, Accord) with sinister tinted windows. Beijing is vast (15M people). Its old and poor sections are rapidly being replaced with high-rise apartments and glossy Western-style development. Young people are Westernized; old people are bewildered.

I eat breakfast at IHEP's Expert Restaurant: 3.7 Yuen (50 cents). We drive 2.5 hours (with Francois' assistant Jill and IHEP physicist Nik) to the Great Wall, and hike a ~6-mile segment that spans 32 towers. A flock of T-shirt and souvenir vendors - small Mongolian women - descend on us and follow along for several miles. One latches on to each of us. Mine speaks a little English and we chat a bit; I like her. I eventually give her a 20 Yuen tip, but decline to buy anything. She gets all pouty and angry (I don't take it personally). 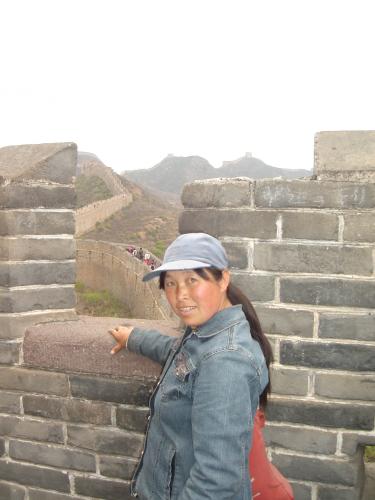 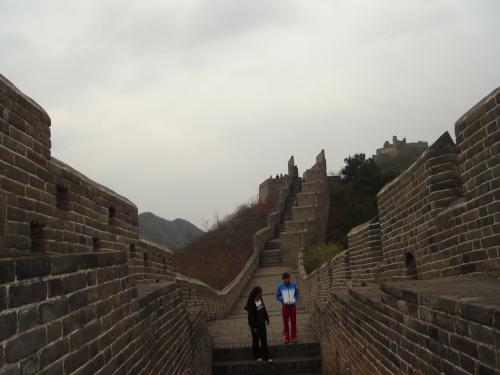 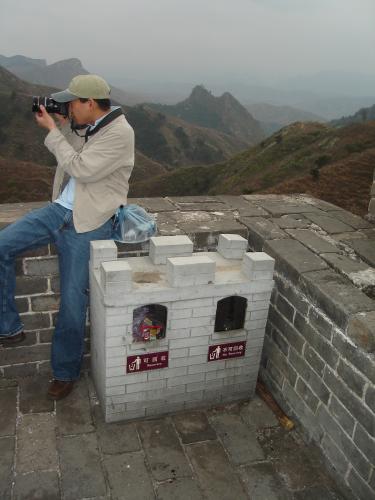 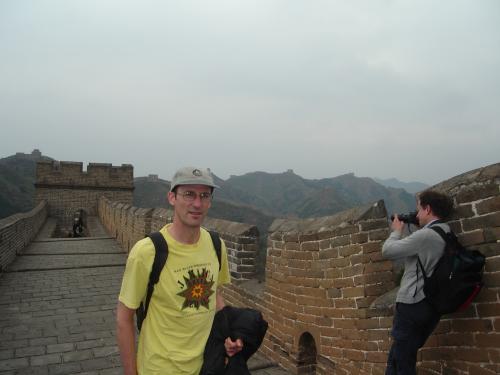 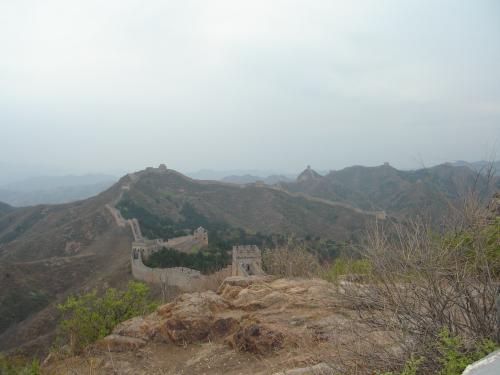 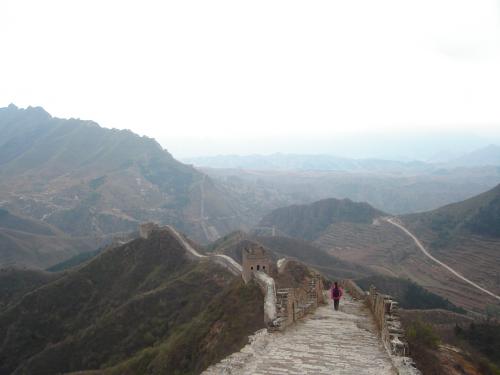 The hike goes up and down some alarmingly steep and crumbly stairs, and is moderately strenuous. There are ticket booths every so often. We cross a river via a long footbridge. There's a zip line for Y45, which Nicolas takes. At the end the van meets us and we return to Beijing. 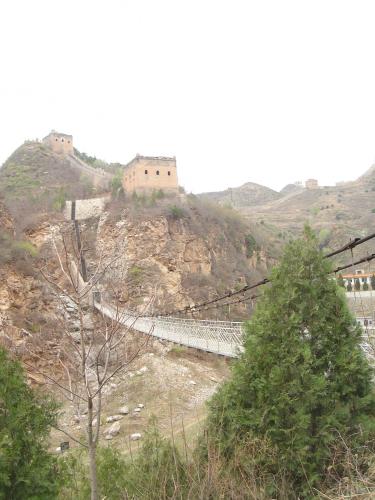 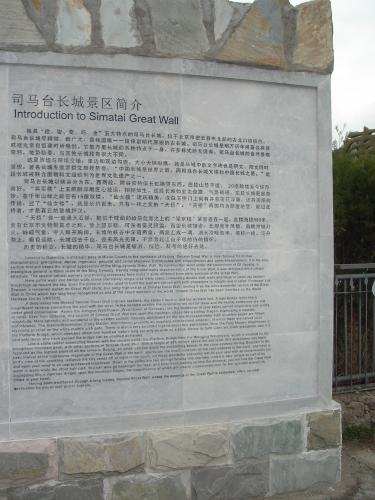 We visit the Olympic plaza, bird's nest stadium etc. We see the 'Flame building': a 7-star hotel (what exactly do you get?) with an immense TV on the side.

We have dinner at a Mongolian restaurant, with brief music and dance by a loud and enthusiastic troupe, who grab several of us (including me, unfortunately) for dancing.

We give our 3-hour seminar at IHEP. The leader of the Chinese BOINC group is there, after a 13-hour train ride from Shanghai. He's a startlingly mature, articulate, and obviously brilliant young man, a senior in college, preparing to go to the U.S. to study economics, and we all feel that we've had a brush with future greatness.

We fly back via Hong Kong, getting in around 11 PM. There's ground fog at Taipei, and the pilot aborts the first landing attempt, slamming the engines to full power and climbing steeply. Scary. Ben, who knows exactly what's going on, is a calming influence.

I give my keynote talk, which goes well. Most of the conference is Grid talks, which I avoid by working in my room. In the evening there's a reception (actually, banquet) at the Howard Hotel.

More conference. In the afternoon, a group of us visits the history museum, which has a fantastic collection of artifacts from excavations of mainland China in the 1920s. An very knowledgeable and engaging young man acts as docent. The collection features Written records of civil-service exams, burial items, weapons, chariot parts, and some 'oracle bones': turtle shells on which questions were written (What's the weather going to be? Who's going to win the next battle? Why does the king have a toothache?) and then poked with a hot stick; the sound or shape of the resulting fracture indicated the answer. 17,000 of these were found in one pit.

Ben/Christian/Nicolas/Daniel and I go to the Taipei 101 skyscraper, which features a huge dazzling atrium, the world's fastest elevator (101 floors in 37 sec) and a giant concrete sphere - a 'passive wind damper' - on the 89-90th floor. There's a display of highly detailed gold insect sculptures and giant jade cabbages. One runs a gauntlet of jewelry counters to reach the Down elevator; the slightly aggressive salesgirls evoke the Mongolian T-shirt ladies. I'm not in a great mood.

Thanks to Daniel's reconnaisance, we escape the glossy skyscrapers and find a funky street with low-end restaurants. We have beer and Udon - very satisfying.

We take the metro to Yugang station, and Nicolas and I take a cab the rest of the way. The driver has multi-Megawatt high-on-life energy. A sample of dialog (all of it shouted at top of lungs):

... and so on. I absorb his positive energy like a lightning rod, and feel embarrassed by the cold, uptight, inhibited nature of westerners like me and Nicolas.

More conference. After the keynote, Francois, Daniel and I go for a hike. We walk along the canal, through a small neighborhood, and past a 'military cemetery' that goes far up a hillside. We reach the slightly seedy-looking Chinese Institute of Technology, and Francois asks some nerdy students for directions. It turns out that a hiking trail begins just up the street. This trail (rock-paved, well maintained) goes up a canyon, through lush and incredibly beautiful jungle with all sorts of ferns, flowers, exotic trees, and butterflies. 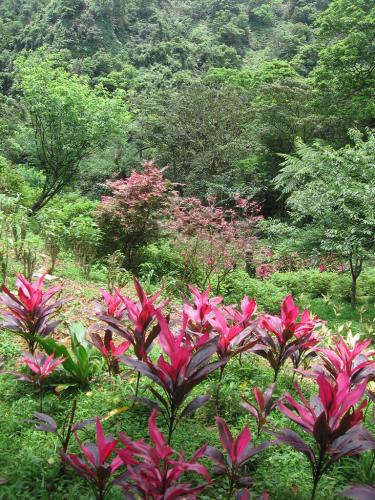 This and the next photo by Daniel Gonzalez

The trail continues along a ridge, passes a small Buddhist temple and an exercise area, and reaches a junction. We continue a bit past it, and are treated to a close-up panoramic view of downtown Taipei; the 101 skyscraper is not far away.

View from hilltop; skyscraper at left

We descend by a different path, then have a suprisingly good lunch of breaded chicken and noodle soup at a student hole-in-the-wall.

The conference banquet is at the Silks Palace of the National Museum, or something like that. Another fancy 10-dish banquet. I chat with a hydrologist from Thailand.

We return to the guest house around 10:30. Nicolas and I decide we need beer, and the vending machine is empty, so we walk to a convenience store, then sit outside and talk about sailing etc. until way too late.

The plan was to hike again at 7:30 but everyone sleeps in. Daniel and I end up going on abbreviated walk to the China Insitute of Technology. Francois and I sit for a couple of hours in the cafe, then take a cab to the airport. I get there around 3 and kill many hours before my 11:10 PM flight.

The Taipei airport - like all the big ones these days - is an endless gauntlet of glittery luxury stores, selling designer bags, perfume, beauty crap, watches, jewelry, etc. Dozens and hundreds of these stores. No one seems to be buying anything. I try to find some goddamned food, and finally succeed after walking past miles of Gucci, Coach, Fendi, Chanel, and Bvlgari.