Click images for large version and again for full resolution
Dec 4 was the fourth anniversary of Michelle Yu's death. I went with my friend Maureen (Michelle's cousin) to Los Angeles to visit Michelle's grave and try to climb Mt. Baldy, where Michelle died in a climbing accident. My attempt last year failed because of bad weather. 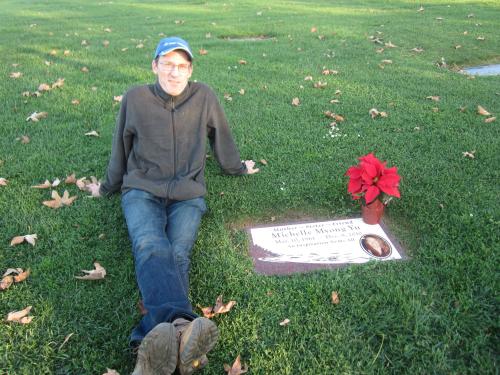 It happens that Maureen is acquainted with a couple, Belinda and Robbie, who live in the town of Mt. Baldy, a village of a few hundred people near the base of the mountain. I also slightly know Belinda from 20+ years ago, when she was considering going to CS grad school at UCB.

We drive to Belinda and Robbie's house, bearing gifts (from Trader Joe's) of dark chocolate for her, Racer 5 IPA for him. They live in a wonderful house, rustic but cozy, with their adopted 6-year-old son Gabriel (named after the San Gabriel mountains). 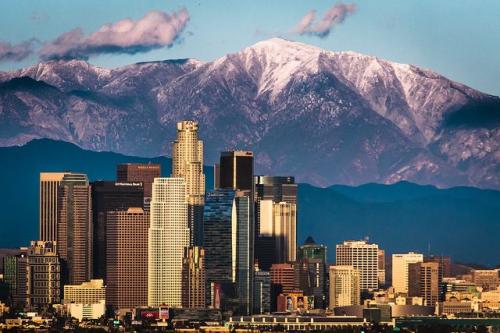 Robbie grew up in Mt. Baldy, and is intimately familiar with the mountain in all seasons. He climbs and/or runs to the summit frequently, and in the winter climbs with skis and goes down insanely steep slopes and gullies.

We get in his pickup truck and drive up an unmarked and pot-holed driveway to a secret parking space near the trailhead. It's at a house, currently vacant, that used to have a model railroad circling it, like the small one at Tilden.

Unlike last year (when it was freezing, windy, and icy) the conditions are ideal today - temps in the 50s, mild winds.

We start up the San Antonio Falls Overlook road, turn left on the (unmarked - nothing here is marked) summit trail, pass the register where Michelle wrote her last entry, then after 100 yards turn right on the even less marked Register Ridge trail.

This trail ascends steeply about 2,000' up to the Devil's Backbone trail, which leads to the summit. It's a fairly clear day over LA, and there's a beautiful view out to the Santa Catalina Islands. The trail is largely shaded by pine trees. Robbie is surprised that he's never been here before.

As we ascend, my sciatica asserts itself. This is a pinched nerve in my lower back that manifests as sharp pain in my left knee. I can keep it under control by limiting the motion of my left leg and avoiding impacts on it. This slows me down a bit.

Robbie and I swap stories about hiking and climbing. He and Belinda used to live in the Bay Area, and he's spend lots of time in the Sierra. Robbie tells me of Pavel, a local hiking/climbing legend, Czech, a bear of a man who knows every foot of trail and who has rescued a huge number of lost hikers in these hills.

We reach the ridge and go left (West) on Devil's Backbone trail. There's some traffic on this trail. We chat with two young men, Cory and Diego, who ask for directions. They've been hiking since 8:30 in the morning and must have taken some wrong turns. A number of middle-aged Asian hikers are heading downhill.

I chat with Cory, an unusual young man in whom I take an immediate interest. He's originally from Seattle, but never went to Rainier and only recently got interested in mountains. He's planning to move to Barcelona for a year and teach English. He knows American Sign Language but no foreign languages.

We reach the summit. 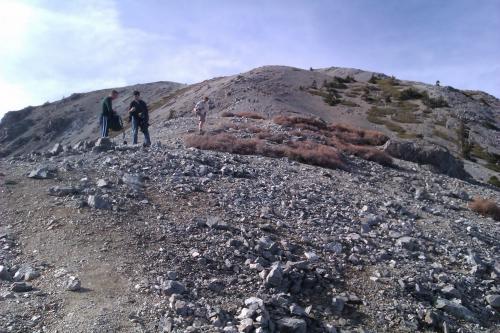 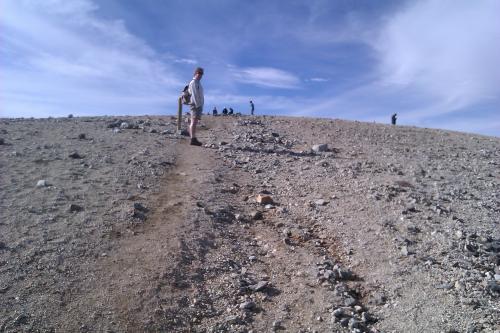 REAL close to the summit 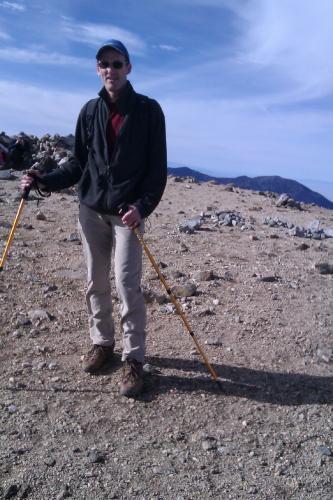 Me extremely close to summit 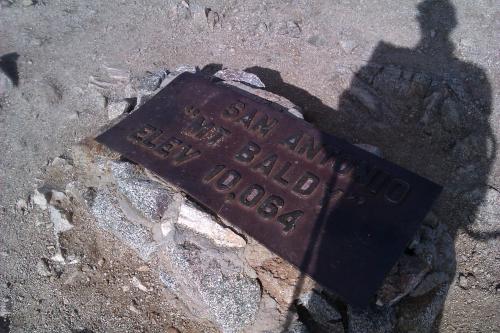 Robbie and I walk in the direction Michelle went, roughly North. After 100' or so there's a faint trail, which descends steeply and heads toward some ridges about 1 mile away. To the left of this trail is a drop-off that continues, very steeply, to a narrow canyon about 2,000' below. 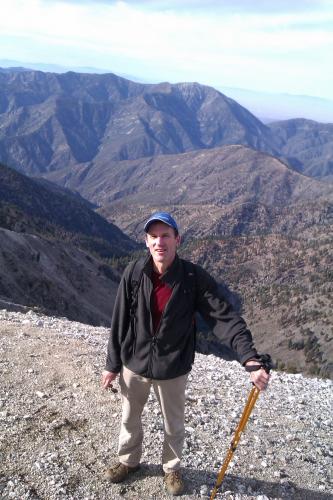 Steep drop-off is behind me

Robbie thinks this is where Michelle fell, and indeed if you started sliding you wouldn't stop until you hit the canyon floor. But the canyon floor doesn't look like the craggy rocks where her body was found, and I read that she was thought to have walked 1.5 miles before falling. So I still don't have a clear idea of where she fell. But I'm satisfied with having seen the general area.

Robbie and I descend the ridge to the West of the summit, along the top of the bowl. Robbie says he likes to "rock-ski" down the bowl's scree gullies. I tell him I can't do this because of my back, which is getting worse; I'm moving very cautiously. But he wants to do it, so we agree to meet at the ski hut at the base of the bowl.

I reach the point where I turned around last year, and recognize the manzanita bush that my glove was blown into by the howling, icy winds. A weird sort of deja vu. I also recognize a particular dead tree. 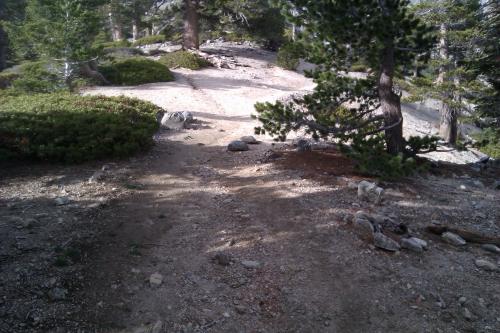 I descend the steep, winding trail in the trees next to the bowl. Cory and Diego come up behing me, moving fast. I latch onto them, and talk with Cory about motorcycles and scooters (he rides a Yamaha 600 sport bike, and is wearing motorcycle boots on this hike, and an aerodynamic motorcycle backpack).

The trail is sketchy where it crosses some big rocks at the base of the bowl; we lose it a couple of times. I'm deep in conversation with Cory, not paying too much attention, when we hear shouts. I look up. The ski hut is 50' above us, on the other side of the canyon. A bunch of people are there, motioning us to go back up the hill. Somehow we went down the wrong fork of the trail. We scramble back up, annoyed because we're tired.

Robbie and maybe 10 other people are at the hut, drinking beer and eating bowls of a hot vegetable stew. To my extreme surprise and delight, one of these people is Missy, the woman who runs the Mt. Baldy Lodge and who made a vital turkey sandwich for me last year. We remember each other very clearly, and we have a long conversation during which I tell her more details about Michelle and my process of dealing with her death. She tells me about her problems with altitude sickness after 40, and yearly trips to Whitney which she had to stop. I get the impression she's led an interesting life, with a lot of mountains in it. She knows about Aconcagua but is unable to pronounce it. She carried 4 cases of beer to the summit (in 2 trips) prior to this year's "Mt. Baldy Run" (which Robbie participated in, and drank quite a few of the beers).

Also present is the legendary Pavel, who looks exactly as I imagined him! He brings me a bowl of the vegetable stew, which he cooked. I'm not actually hungry, but when Pavel offers you a dish, you take it and don't ask questions. It turns out to be quite tasty and I finish it.

I take my bowl and spoon inside. It's a nice big place with a wood-powered kitchen, some beds, and a long dining table. It's very warm and inviting inside. A young man offers to wash my bowl and spoon; I thank him and do it myself.

I rejoin the group outside, which seems to radiate friendliness and positive energy like heat from a wood-burning stove. I love it, and just want to stay there and hang out with them. I don't recall ever being in a group of people who were warmer or more welcoming. Mountains attract a particular type of people, I guess. But I have a flight to catch, so I shake Pavel's enormous hand, share a hug with Missy, and off we go.

After a few hundred yards we run into Cory and Diego again; they apparently took ANOTHER wrong turn. We decide to hike with them the rest of the way.

I talk more with Cory and am progressively more impressed by him. He plays guitar and writes songs, but only for himself and the occasional open mike. He's completely idealistic. He wants to change the world and is trying to figure out how; when he talks about this, he sounds very naive, but also completely sincere and dedicated. He practices yoga. He runs marathons. He works at Whole Foods (with Diego) and is into healthy diet. He doesn't think that I should eat potatoes because of their glycemic effects - even the purple ones. His own diet is mostly vegan, but he'll occasionally eat meat, especially if someone has put a lot of care into the preparation of a dish. I find myself being very inspired by him.

Robbie and I say goodbye to Cory and Diego (slightly sadly, in my case) and drive back to Robbie's house, where Maureen and Belinda are playing dueling violins. Gabriel is feeling grumpy and neglected. I teach him to thumb wrestle, and he lights up. He's a great kid; BTW, he's hiked to the ski hut (5 mile round trip) 17 times and he just turned 6.

We say goodbye and drive to LAX. What a remarkable day - a swirling pastiche of all sorts of feelings: love, optimism, closure, deep communication, man-crushes, triumph, and blissful physical exhaustion, to name just a few.

Injury report: I feel great except for the sciatica, which began last weekend on Diablo. I think I need to use my traction machine regularly, keep up the abs class, and try to not aggravate it for a while.