The trip to Berlin is tedious. I get the special security hassle at Oakland. Getting to the Lufthansa terminal at JFK is an ordeal; the signage is abyssmal. There's a tremendous line at the Lufthansa counter. It takes an hour, and to make things worse only a couple of people arrive after me. The agent takes my passport, runs to the end of the counter, and talks on a telephone for 5 minutes; no explanation. By now it's close to boarding time. There's a lengthy wait at the security checkpoint while they X-Ray a box of soap repeatedly. I have to get a seat assignment at the gate. It's 39E, a middle seat. But I reserved 29A on the web! Apparently there's a 'message' on my entry. One of the agents (in spite of being shushed by another) tells me that apparently my name was on a 'list' - am I a dangerous terrorist?

39E is cramped, I'm wedged between two large men, the lady in front of me keeps stepping on my toes, and the kids behind me keep banging on my seat. The 'Wireless Internet' turns out to a lame Lufthansa portal site, which loads at about 2 minutes per page. If you want real internet access, it's $30 for the flight. I start filling out an the online 'user feedback' questionaire, but the window mysteriously vanishes halfway through. To amuse myself I do three Henry Hook cryptic puzzles.

In Frankfurt there's an marathon between gates, including 6 flights of stairs, both up and down. The airport is incredibly crowded, and it seems like there's a conspiracy to slow down or blockade me. I struggle with anger and claustrophobia, and have several partial and near collisions.

I need to get some Euros. In the past my debit card has worked at European ATMs, but now it just gets 'technical error' messages, and I have no idea of the PIN on my credit cards.

I arrive in Berlin and again fail to get money. The taxi driver arrives late. She says they take credit cards, but when we get to Potsdam it turns out her machine is broken. She takes me to a couple of banks, but as it's Sunday they're just ATMs, and it's the same story. Finally I suggest (in sign language, as she speaks zero English) that we go to the hotel and I'll get money there. This works fine. 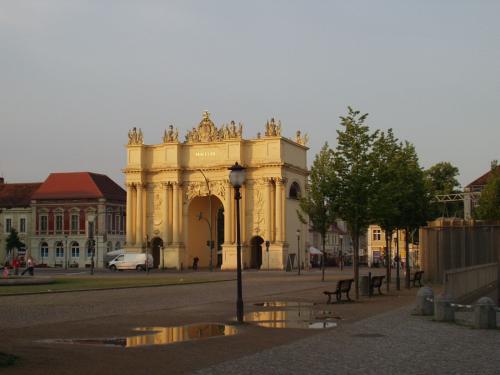 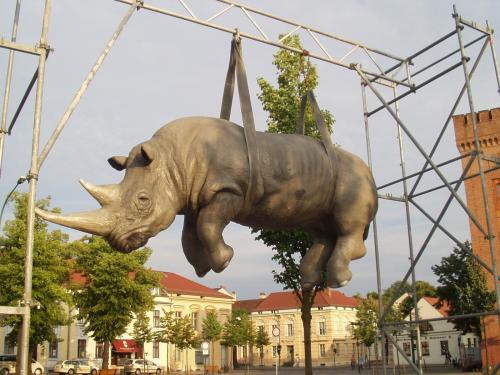 Bad Rhino! Who knows what the hell this symbolizes. (Scaffold is faintly visible at lower right of previous picture)

Most of the buildings are variants of the maize or curry-cream color of the Tor (a few are in sage). There's a keen color sense - something lacking in S.F.'s lofto infestations. 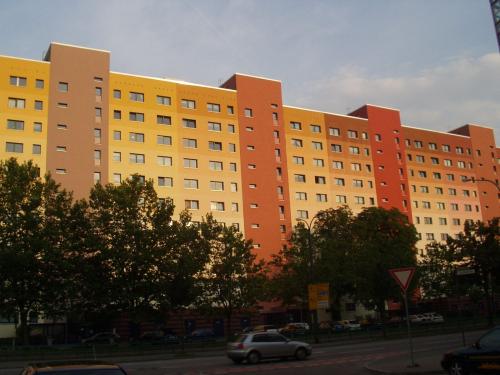 Apartment building; makes reference to the Potsdam pallette, and the frequent use of color gradations on one building.

The hotel turns out to be great. I have a suite with kitchen, luxurious bath, TV with 30+ channels including the great Eurosport (women's volleyball, track and field, sumo), wireless Internet, and private balcony overlooking a rose garden The breakfast buffet is excellent. 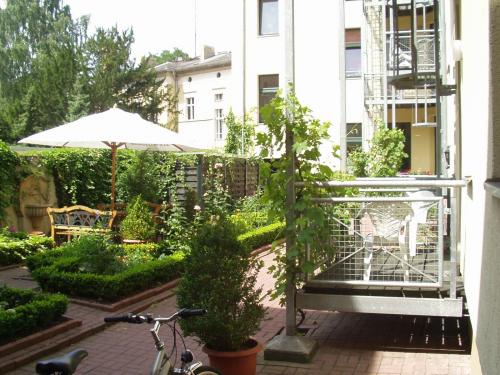 The balcony of my hotel room, and courtyard garden

I go with Bruce to AEI, get set up there, and chat with him for a few hours.

Problem at the hotel: the promised Internet connection isn't there. The move me to another room, supposedly in range of their wireless network, but the signal is unusably weak. Their computer expert blames my lack of 811g card. So I spend the next several hours tracking down such a card, eventually finding it at 'Media Mart' in a giant shopping mall on the other side of town. I get it home and voila! it still doesn't work very well. I sign up for Skype and call Erica; the connection is barely good enough for that.

More networking battles. The computer expert and I take my laptop on a tour of the hotel. The reception sucks everywhere. He agrees to go out and buy a repeater.

I manage to get a little work done, but then the servers in Berkeley crap out. It's not my day. Plus it's been raining all day, I'm down to 10 Euros and it's unclear where my next meal is coming from.

Bruce and family and I, and also Paolo, go into Berlin with no particular agenda. We end up at the Free Love Festival in the Tiergarten, which is mostly brats, beer, and loud techno music. 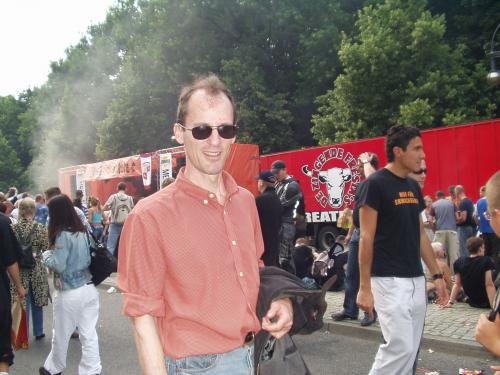 At the Free Love Festival (I didn't get any) 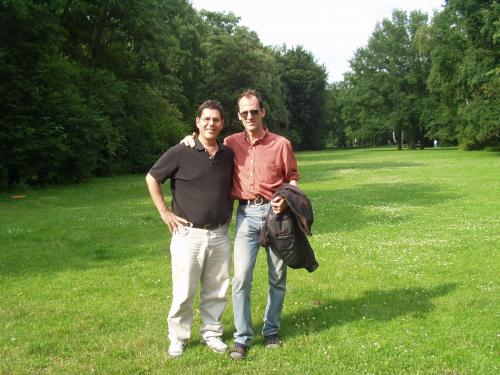 Me and Bruce in the Tiergarten 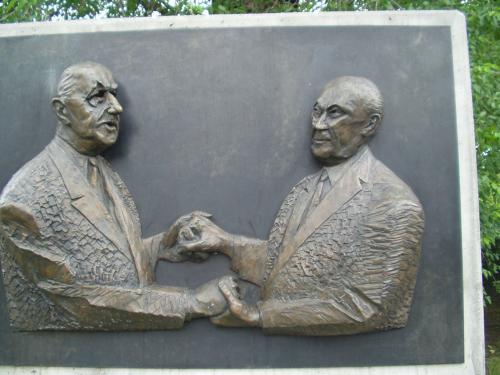 Butt-ugly bas-relief of DeGaulle and some other dude

Back to Potsdam. Here are some pix from BrandenburgStrasse, the pedestrian-only street. 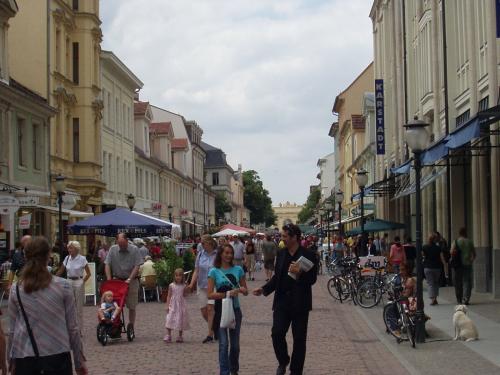 BrandenburgStrasse, looking toward the arch 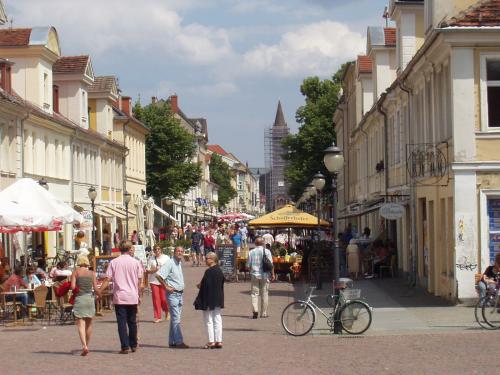 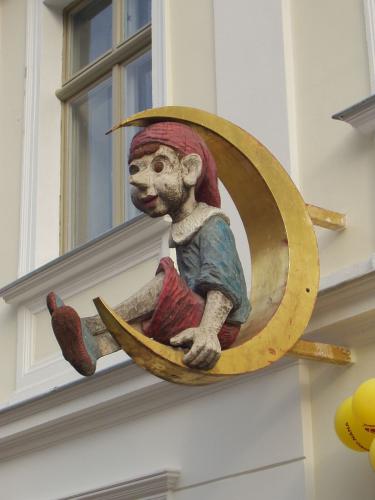 The Boy in the Moon 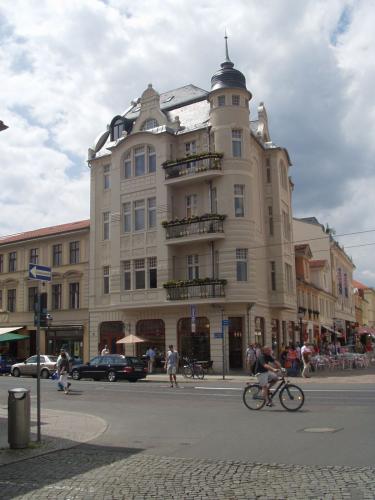 A few blocks away is Sans-Souci, the summer retreat of Frederick the Great, king of Prussia. There are several castles and 700 acres of gardens and park. No cable TV though. 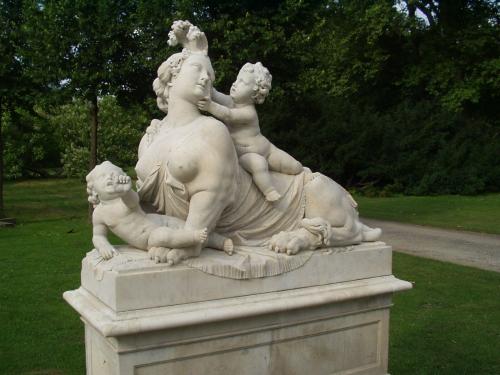 Uh, what the heck is this? 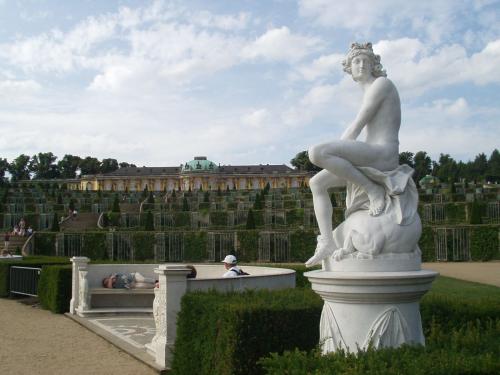 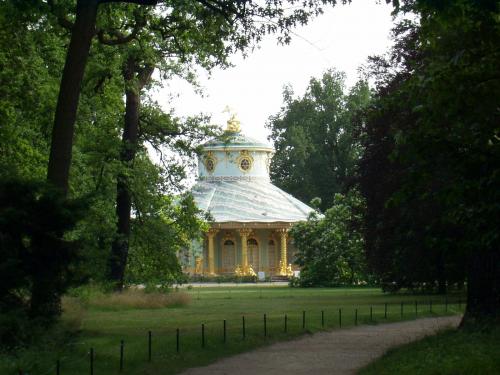 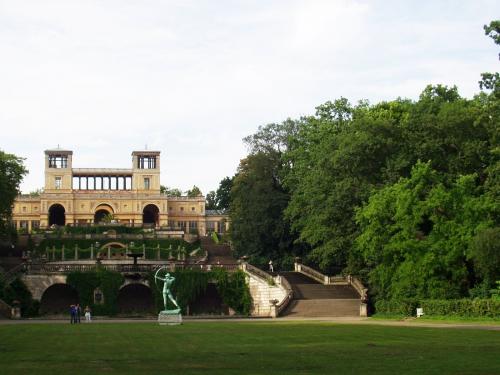 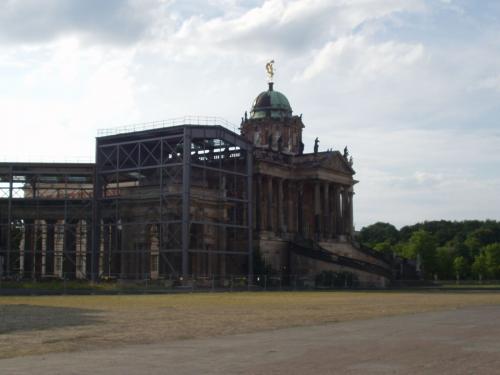 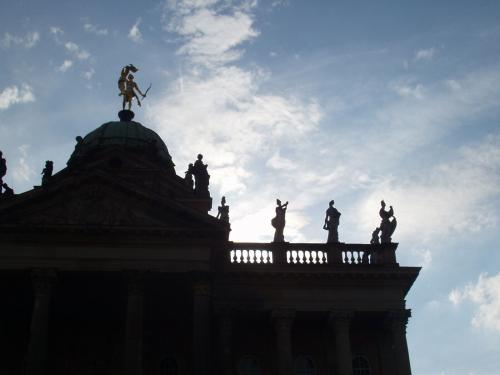 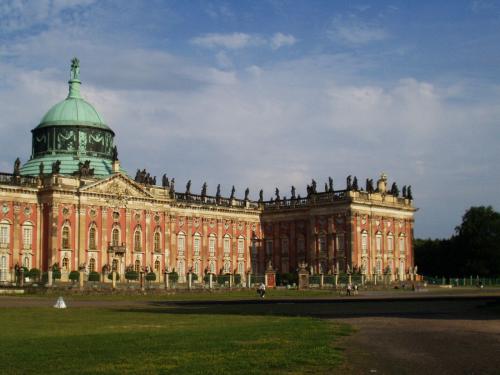 An even bigger castle 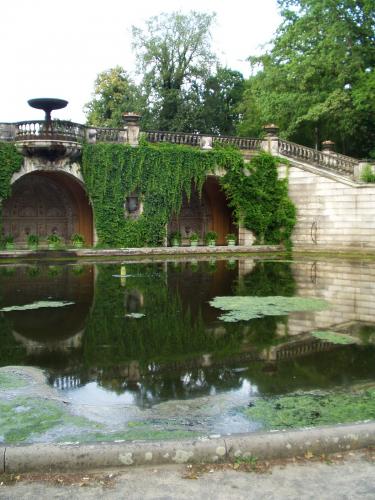 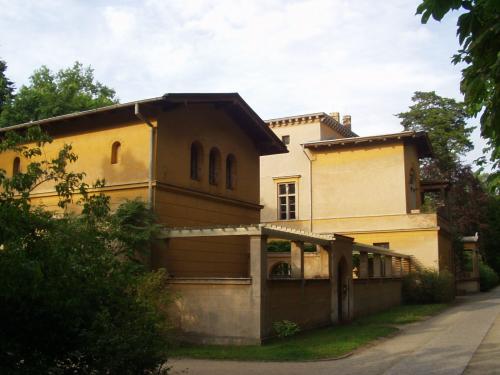