A work trip to Brazil: talks and meetings with people in 3 cities to promote and hopefully catalyze citizen science activity. It's organized by Francois G., with considerable local help from Lucas M.

I fly from SFO to Atlanta, then on the Brasilia. On the 2nd flight, an attractive Brasilian lady sits down in the next seat, but my interest vanishes when she begins coughing and clearing her throat in a low, raspy, and very mucilagenous way. In fact, I lean as far from her as possible, pull the collar of my fleece over my nose and mouth, and maintain this awkward pose for the entire 8-hour flight.

In Brasilia I'm supposed to take a taxi to the hotel. The problem - which I realized before leaving Berkeley - is that I have no idea WHICH hotel. So when I arrive (at 6:30 AM) my first task is to get on the Internet and email someone. It takes quite a while to accomplish this, but eventually I get the info from Lucas.

I arrive at the hotel at 10:30, too early to check in. The very nice girl at the desk directs me to a 'flea market' near the television tower which marks the center of town. 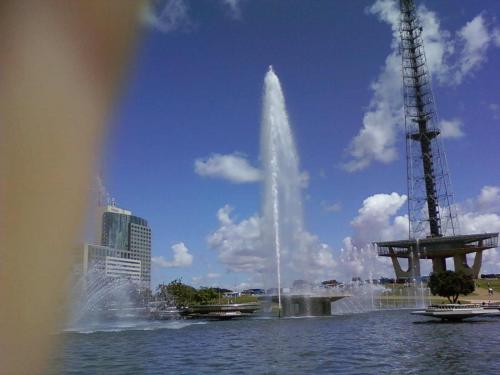 I wander over there. It's not so much a flea market as a large collection of small stores in wooden stalls, selling clothes, jewelry, crafts, etc. 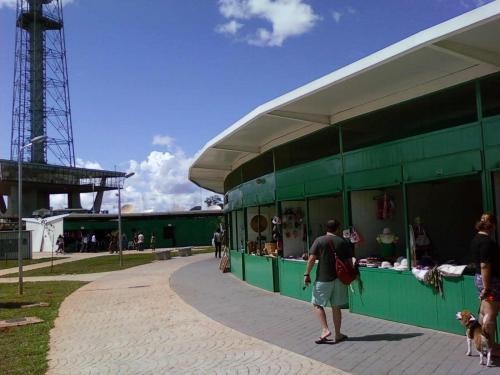 There's a food area with a bunch of stalls selling green coconut juice in the shell, fried meat pastries, etc. I notice some Capoeira people congregating, and decide to stay and watch. They are mostly muscular young men, with a couple of women and kids. One of them plays a big drum, and several others pluck one-string instruments. When everyone's there they move to the center of the plaza and do a sequence of choreographed dances, with 2 or 3 people doing interlocking moves, including lots of hand- and head-stands. The audience stands in a circle, and everyone chants. 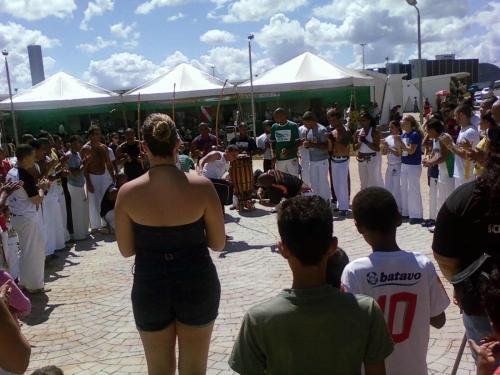 By now it's past noon, so I return to the hotel and check in. The others (Lucas, Daniel, Dan from CPDN, Phillip from the Met Office, Javier from Madrid, Francois, Francisco, and Ben) are there. We walk through an area of vast plazas and absurdly-architected government buildings, and go for a tour of the palace where the foreign dignitaries are entertained. The tour guide refers to the arrangement of floor stones as 'pagination'; I teach her the word 'tesselation', which pleases her enormously. 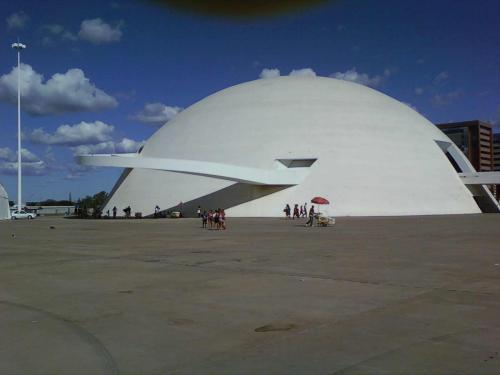 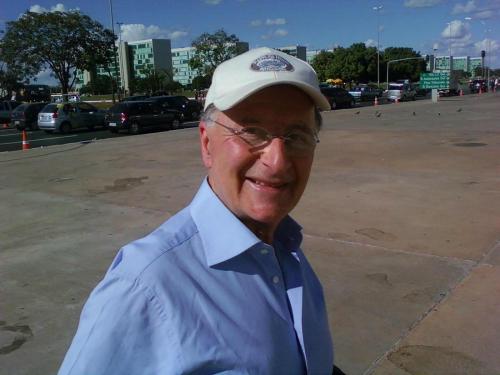 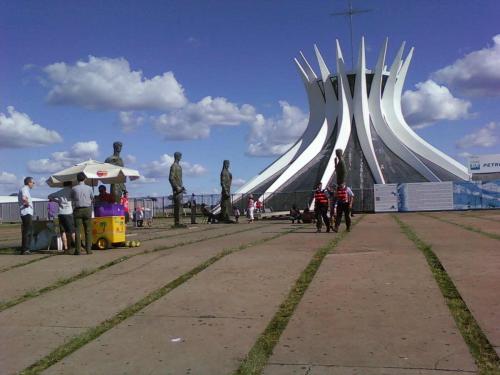 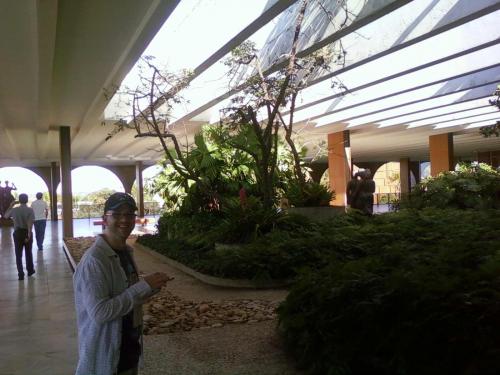 The government workers in Brasilia (perhaps like everywhere) are not industrious. Francisco tells us the story of a TV news exposee of workers punching in, going home for the day, and returning to punch out. The day after this story airs, the parking lots of the ministry buildings are overflowing - and inside, there aren't enough desks to go around.

We go to IPEA - some kind of research agency - and give talks to a very small audience.

We go to dinner at a fancy buffet where you pay by the gram. We all have a margarita-like cocktail that packs a wallop. Lucas explains the principle of maximizing value: don't pay for water. I talk with Dan from Oxford, who it turns out is a member of both the tennis and rugby teams, as well as running marathons (sub-3:00) and doing a bit of rowing too. He's a stud - 6'4" and 200 or so.

We fly to Rio and check in at the Rio Copa hotel, which is close to Copacabana beach.

We walk to the venue, a physics institute. The route goes through a long, noisy tunnel and a shopping mall, where we stop for lunch.

Our local host, another Javier, is a handsome man with long hair and a beard, and the most resonant voice I have ever heard: a younger version of the 'Most Interesting Man in the World' in the Dos Equis ads.

We give the same talks, again to a tiny audience.

We drink beer at an outdoor student place. One of the attendees is a very talkative woman, an epidemiologist from a nearby university.

The others go to some kind of all-meat restaurant, but I choose to eat fast food in the shopping mall and do some work back in the hotel. Lucas is worried that I'll get mugged in the tunnel.

First day of the hackfest. I team up with Alberto and Diogo, phylogenetics researchs from FioCruz. I set to work porting an app (RaXML) to BOINC.

Lucas and others work on a volunteer thinking project to digitize tables in old economic documents.

Fabiana (an MS computer science student) works with Ben to get CernVM running on her laptop.

My laptop is plugged into a socket on the floor, covered by a metal hatch. Somehow the sharp edge of this hatch cuts my power cable. Javier (our host) takes me to an electrical lab and fixes the cable, but the transformer has been shorted out and fried.

We have dinner at an outdoor place near the beach. I talk with Javier (our local host) who it turns out is a former classical guitarist. I also talk with Fabiana, who is an avid hiker and knows how to get up Sugarloaf, one of the striking mountains that surround Rio.

Francois, Daniel and I get up early and run for a few miles on Copacabana beach. Pterodactyl-like birds circle overhead. I get acute knee pain on the way back.

Javier, bless his soul, takes me on a bus to downtown Rio, to a large building full of tiny high-tech stores. Sure enough, there's a place that sells laptop power supplies and batteries, and they have exactly what I need. Another store sells every type of cable and adapter in the world, and I get an adapter so I can use the power supply back home.

More hackfest. I finish the RaXML project, then throw together a Bossa project for Lucas, and implement a team-lookup web RPC for Daniel.

At 5 I mobilize the Sugarloaf hike. Fabiana and I set a brisk pace. The trail is very steep, but is full of tree roots which make handy steps.

We fly to Sao Paolo, getting in fairly late. The guy at the desk is extremely slow and also remarkably rude: e.g., he points out that I look much older than in my passport photo. The hotel is in a marginal part of town, across the street from a soccer stadium that is being demolished and rebuilt for the upcoming World Cup.

We go to UNESP, the 2nd-best (after USP) university in Sao Paolo. We give abbreviated versions of our talks. The audience is medium. A couple of guys talk to me afterwards, one of them an MS student who wants to do his research on BOINC. Ben's iPhone, we find out later, is stolen during the coffee break.

After lunch, we (except for Ben, who stays to work) take a van to INPE, the Brazilian space agency, which has extended its well-funded tentacles into environmental areas as well. The ride is very long (2+ hours) and we get lost a bit.

We see their movie and get the tour, then have a fairly bizarre meeting where two big-wigs from INPE seem to be having a dominance ritual. One of them wants to 'beat SETI@home' by attracting 10 million volunteers to a thinking project of dubious relevance.

We return to Sao Paolo. I reluctantly accompany the group to dinner in Japan town, which is a long taxi ride. The dinner is unexceptional, although the hyper-gay waiter is entertaining.

We go to Paulist Ave, a downtown area. Ben wants to go to the modern art museum, but it's closed until 11. Instead, we walk through a beautiful rain forest-like park, and have a sort of wind-up meeting at a cafe. 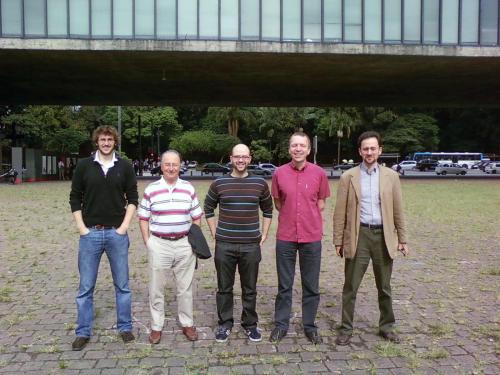 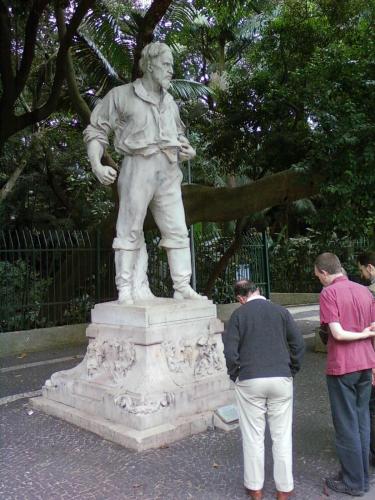 Then we take cabs back to the hotel, pick up luggage, then on to the airport at about 2 PM. My flight is at 9 PM, but fortunately there's wi-fi and a power plug, so I'm a happy camper. I eat dinner at another pay-by-the-gram buffet; it's very good, and my bill (R$ 21.60) is almost exactly the amount of Brazilian money I have left, so as they say, Life is Good.