I had a free weekend and wanted to pack in as much action as possible, so I arranged with my rock-climbing partner Todd Stuart to attempt Mt. Conness and Mt. Dana on consecutive days.

I meet Todd at Ironworks to climb a little before hitting the road. The scheduled 7:30 departure slips to 8:30, and we pull into Mono Lake around 1:15 AM. It's warm, calm, and fragrant; the stars are the best I've ever seen, with the Milky Way extending all the way down to the horizon.

We sleep late and reach the Conness trailhead (at the Saddlebag Lake walk-in campground) at 10:30. A woman tells us that it has rained in the afternoon for four consecutive days, starting between 4 and 6 PM.

We take the route discovered by me and Rob V: up the valley to the right, up the green waterfall gully to the plateau above Alpine Lake, and the 3rd-class scramble up the headwall to the summit plateau. 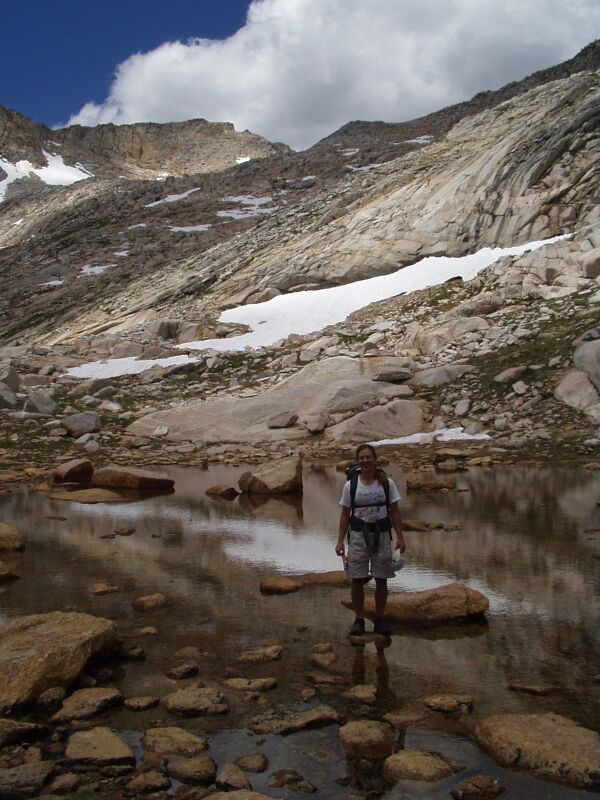 Todd in shallow lake just above the waterfall gully 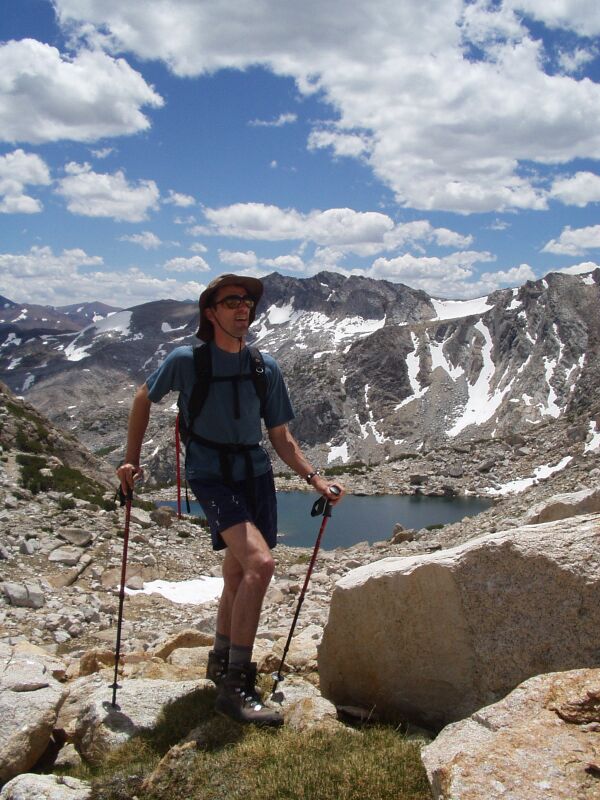 Me, with Alpine Lake in the background

Todd carries 6 quarts of water and is also slowed by the physiological effects of his detoxification diet (no grains, sugars, or processed foods). It's his first time over 10,000', and the altitude takes a toll. We reach the headwall around 1 PM, which is a bit late for my taste. I suggest turning around, but Todd wants to summit.

The castle-like summit block is sinister as always, and the 'drawbridge' arete holds one's attention. We summit and sign the register. It's calm and fairly warm at the summit. There are cumulus clouds all around, some looking a bit dark, so we head down quickly.

We descend the headwall and go around the partly-frozen lake at the top of the plateau. We're descending the slabs in the middle of the plateau when I hear a shout from Todd and turn to see him tumble to the ground. He stepped on a wobbly rock, fell forward, and rolled once. His left hand is hurt, his knee is bloody, and he's in major pain. A few minutes pass. He takes inventory - his head and legs are OK, so he can walk. But something is wrong with the hand.

I take Todd's heavy pack and give him a pole. We descend, slowly and safely. Getting down the waterfall gully is a challenge. Todd ices his hand with snow and dips it in streams.

Mercifully there's no rain. We get back to the car around 7. We stop at the Mobil station. There's no hospital in Lee Vining, so (after a stop at Mono Cone) we drive to Mammoth and visit the emergency room there. Sure enough, the metatarsal of Todd's ring finger is broken. They put a splint on it. Todd is severely bummed out because this means no climbing for six weeks, as well as the difficulty of everyday tasks.

We buy some food at the Mammoth Von's and return to Mono Lake around midnight. That night it rains and Todd, who's sleeping outside on a giant air mattress, has to retreat to the car.

We sleep late and decide to drive back. We stop at Puppy dome, walk to the top to look at bolts, then walk around the back and hang out by the stream. Todd does some wading while I boulder a V0--. Some other climbers (who work at Tioga Pass Resort) are practicing a sloth-like technique, with double heel-hooks, along a ledge 3 feet off the ground.

We stop in Oakdale, but Todd's favorite brewpub is out of business. We avoid a local with an anger-management problem, then look at radio-controlled airplanes in the great hobby store. In Escalon, we stop at Missy's but it's closed due to a company picnic. I go the usual Subway.

Summary: for some reason I keep making the mistake of thinking that Conness is a good introduction to Sierra mountain climbing. It's not. It's hard and potentially dangerous. I feel bad about Todd's injury. Hopefully the 6 weeks will turn into 4 weeks, and they'll go by quickly.