Y and I set out from Berkeley around 11 AM. We get hungry around Livermore and stop at place for coffee and cookies; the coffee is bad, but the two cookies, oatmeal chocolate chip, are substantial and good, and last the whole trip.

Y has brought two CDs she burned, of Canadian popular music from 1900 onward, with emphases on the last 40 years, and on music that Y likes, that had a formative influence on her, or that has Canadian significance. We listen to the first of these, which somehow is lacking the Great White North theme song, as well as an example of the Great Quebecois Overwrought Ballad.

Instead of turning north on 120 toward Groveland, we keep on 108 and go over Sonora Pass - an extremely beautiful road. Y is impressed by the number of campgrounds, most of them partly empty. We stop at one to use the loo.

We descend the steep east side of the pass, past the army base, and on to Bridgeport. We visit The Rhino, where I once heard some singing by embittered women. We split a pint of Alaskan Amber. I ask the bartender (an underage-looking girl) about the singers; she hasn't heard of them, and doesn't seem interested.

We continue to Lee Vining, arriving around 6. We get food to go at the Mobil station: a grilled veggie sandwich with potato salad for Y, a swordfish sandwich with seasoned fries for me. We take these to the camping spot in the sagebrush area south of Mono Lake and sit in folding camp chairs. The sun is starting to go down, there are some dramatic sun-rimmed clouds over the Sierra, and theism-inspiring rays of sunlight slant across the sky. 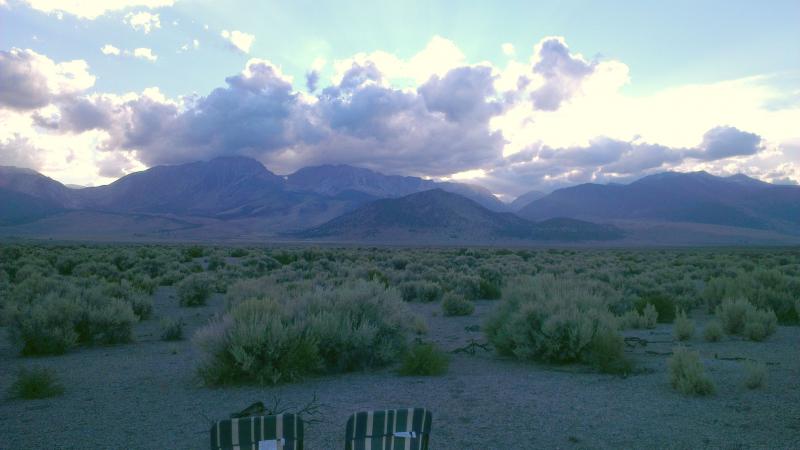 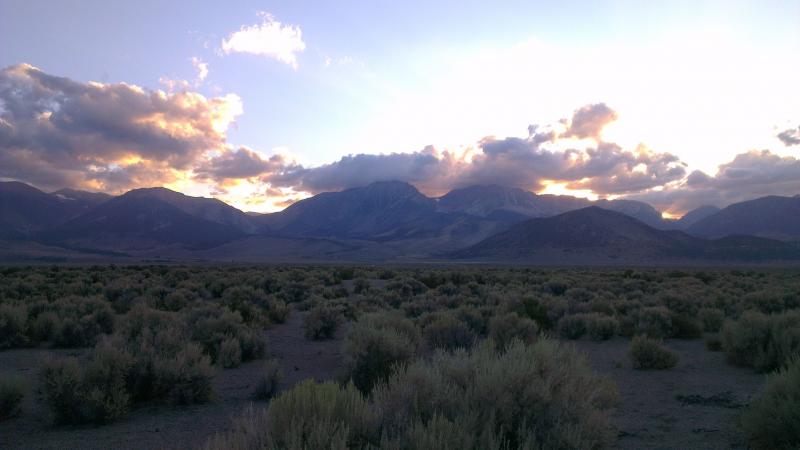 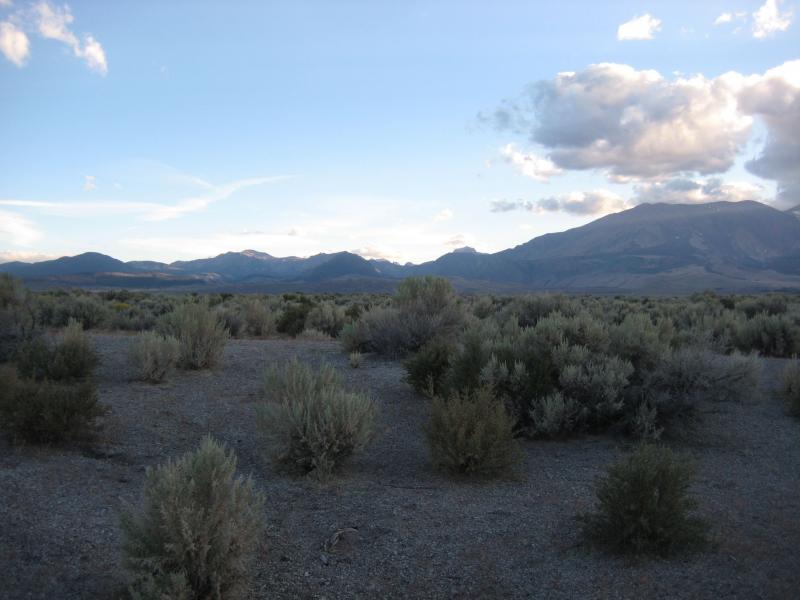 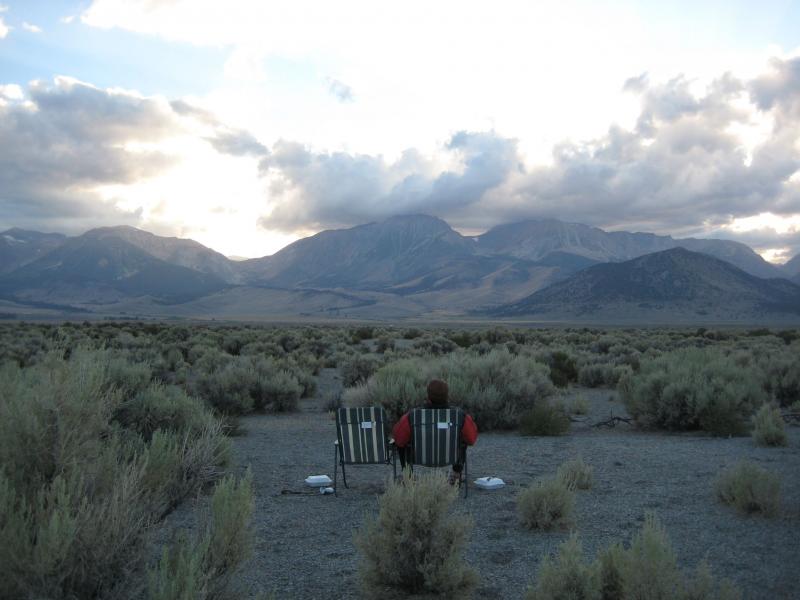 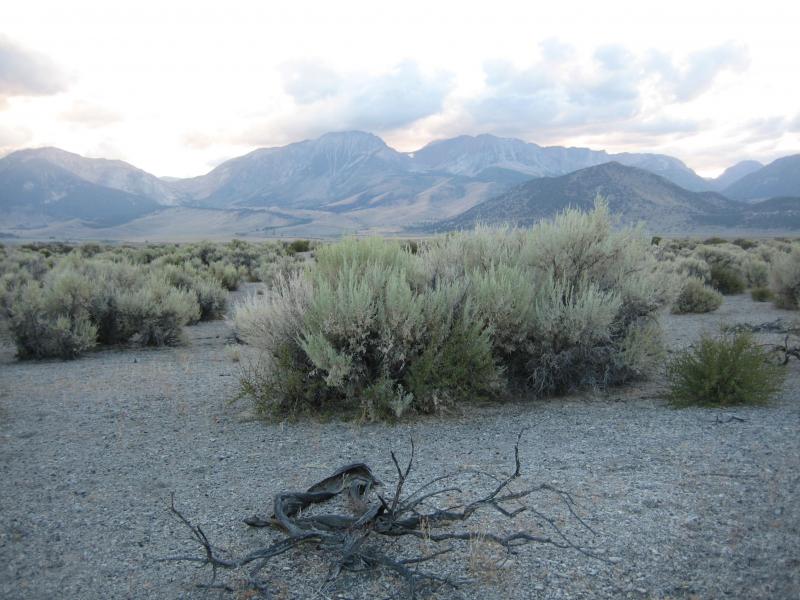 By 7 it's starting to get dark so we head out. The car nearly bogs down doing a 3-point turn, and there's a noisy collision with a sagebrush.

We drive up the canyon to the Tioga Pass Resort, where I've booked a room. But it turns out that I actually booked a room at the Tioga Lodge, which is back down in Lee Vining. So we drive back down. We imagine that the Accord is getting pretty worn out, and is starting to question my navigational competence.

The Tioga Lodge, a couple miles north of town, turns out to be pretty nice. It has a health-food type restaurant. Good shower, copper sink, no TV. Y is unhappy only about the fabric-softened towels and sheets. We're in the Nellie Bly room, named after a silent-film actress who settled in the Lee Vining area, guided mountain climbs, and built a completely upside-down house (with matching outhouse).

I take 2 Tylenol PMs (expired 2010) and sleep reasonably well. We return to the Mobile station, where Y gets a breakfast burrito and I reheat last night's leftovers in the microwave. The coffee is bad.

We drive to the Sawmill trailhead and are on the trail by 9. Y is impressed by - and intensely envious of - the walk-in campsites. 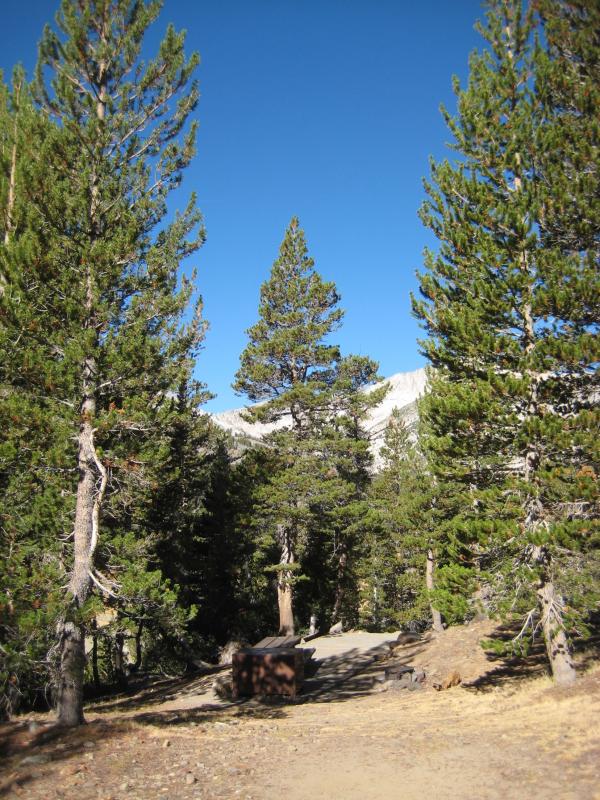 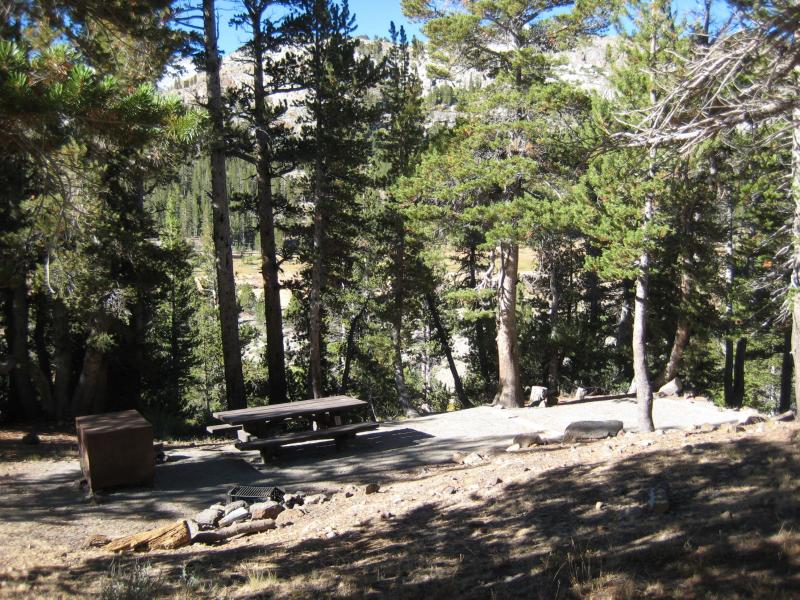 I'm feeling a bit woozy from the antihistamines and also have slight migraine auras, but physically OK. I set a fairly slow but persistent pace for the flat part and the initial uphill. 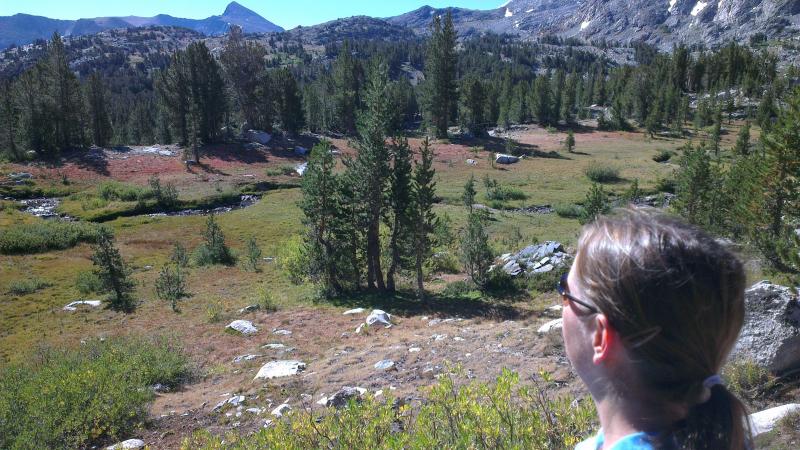 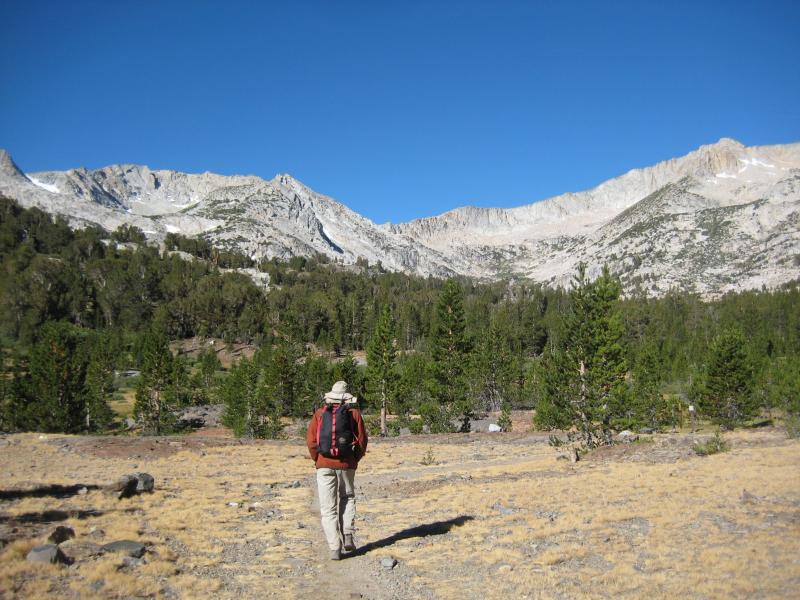 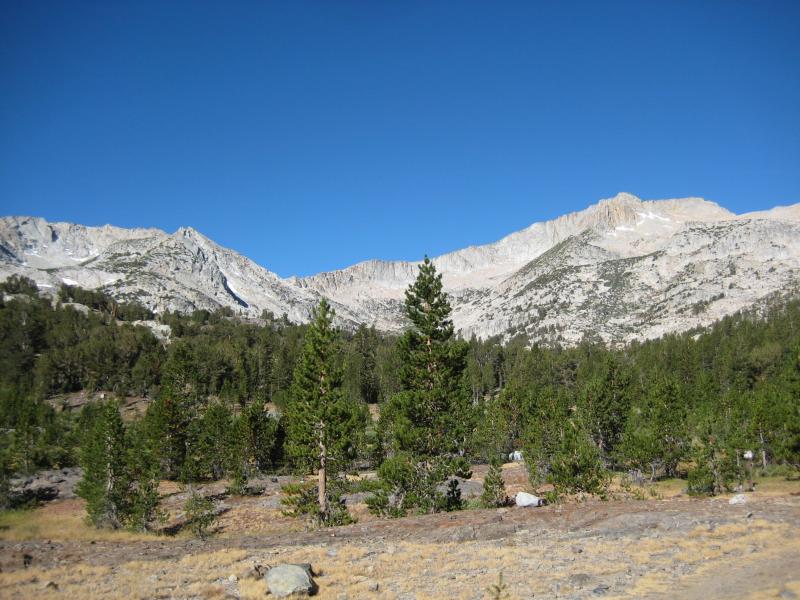 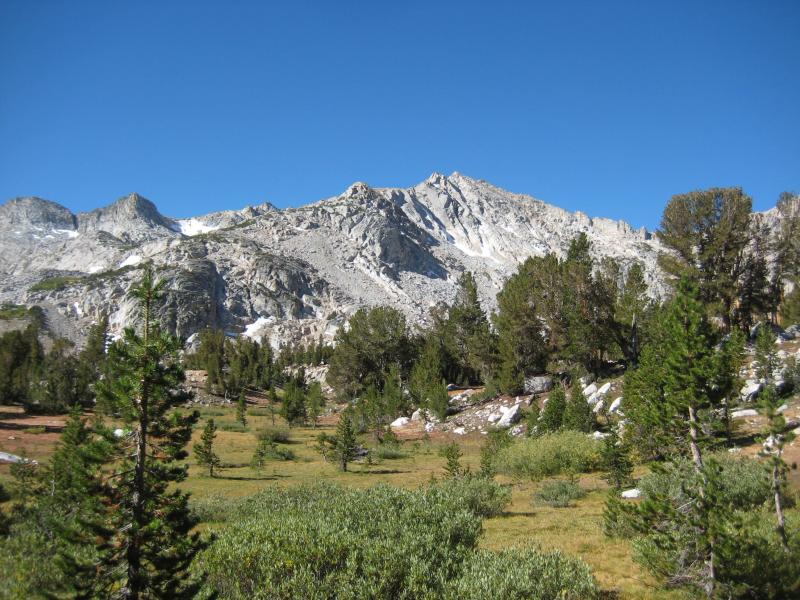 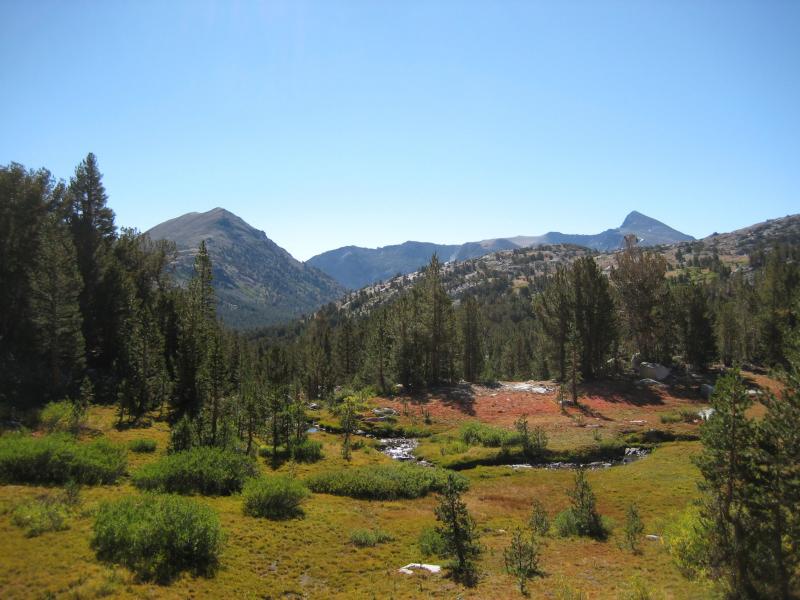 At the base of the first cliff we encounter another group: Rob, a guy about my age from New Zealand (currently Mill Valley), his granddaughter Katie and her friend Hector. Rob has been here many times and knows the same route I do. Katie is a botanist and stops to identify plants. 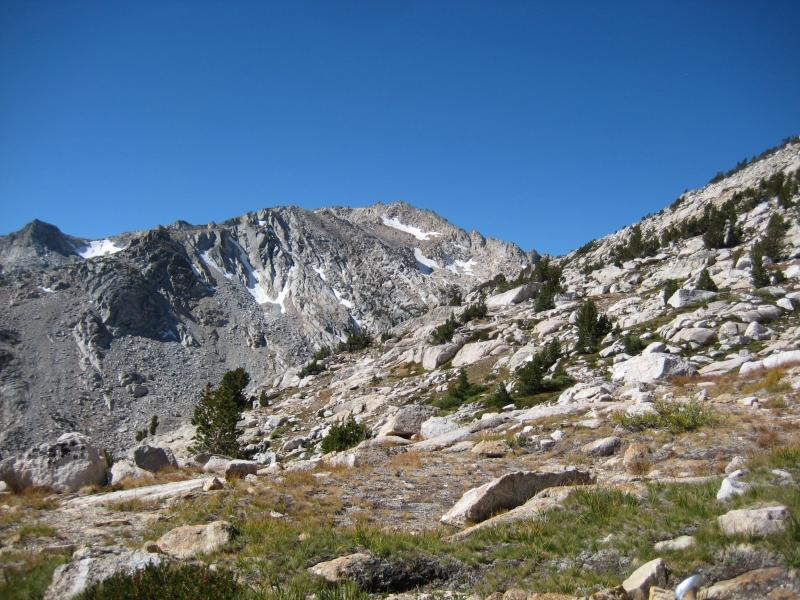 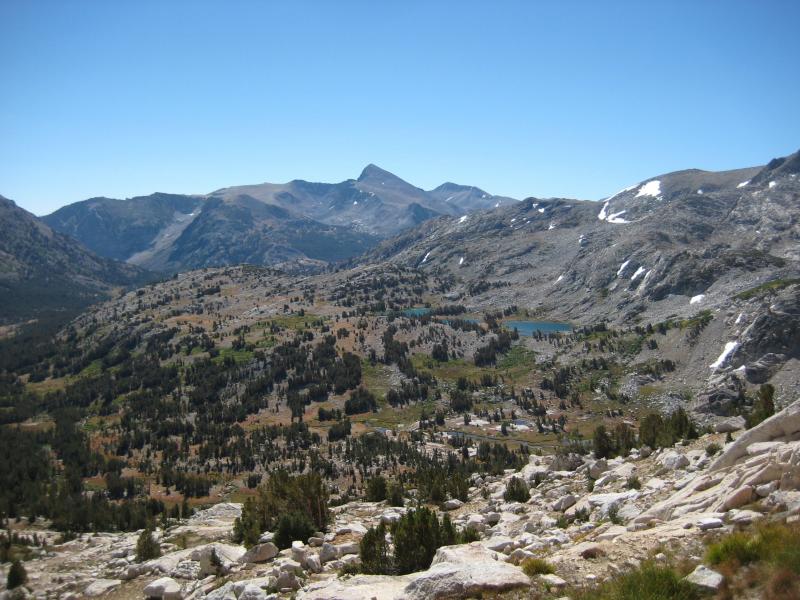 We ascend the gully and do the rock-climbing move. We cross the plateau, climb to the upper lake mostly on grass, and briefly visit House Rock. 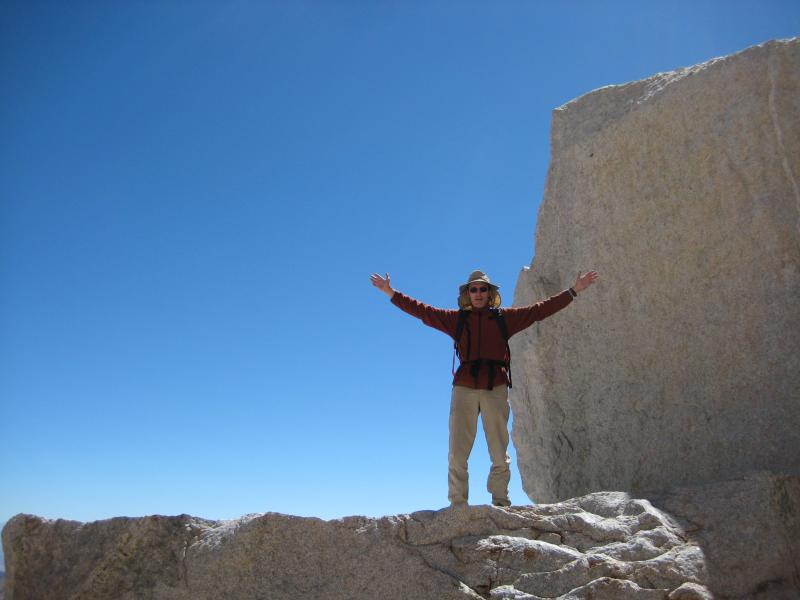 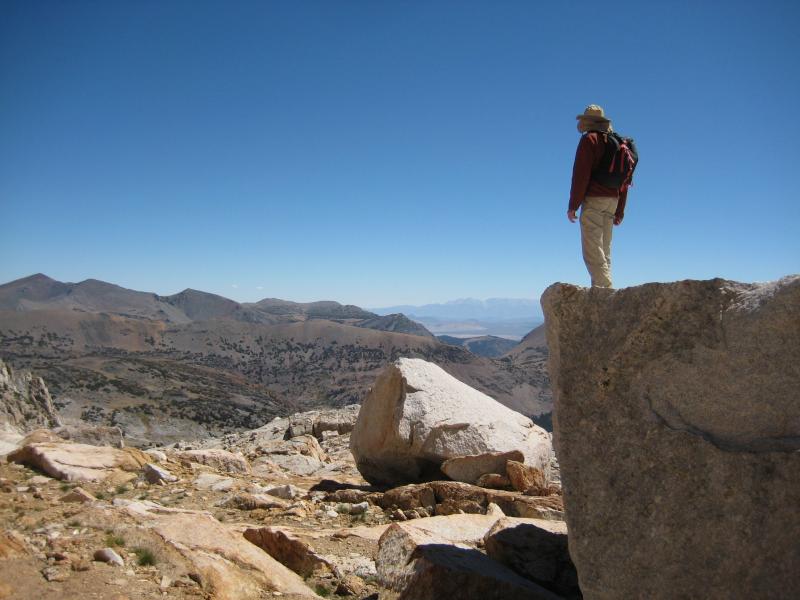 We climb up to the ridge, and look down at Conness Glacier. 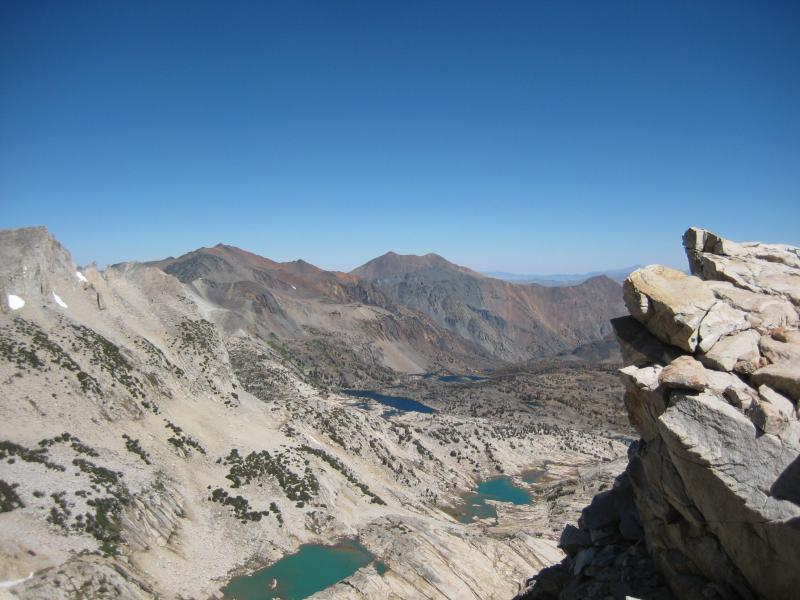 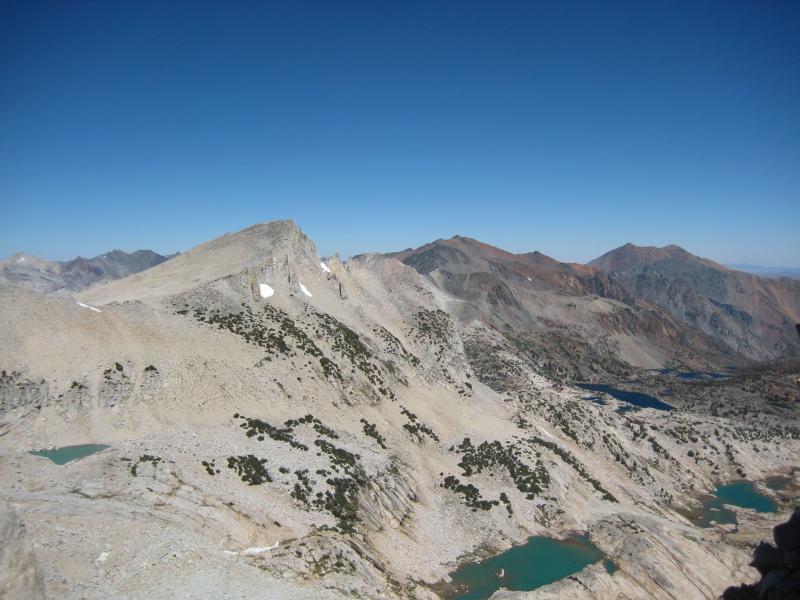 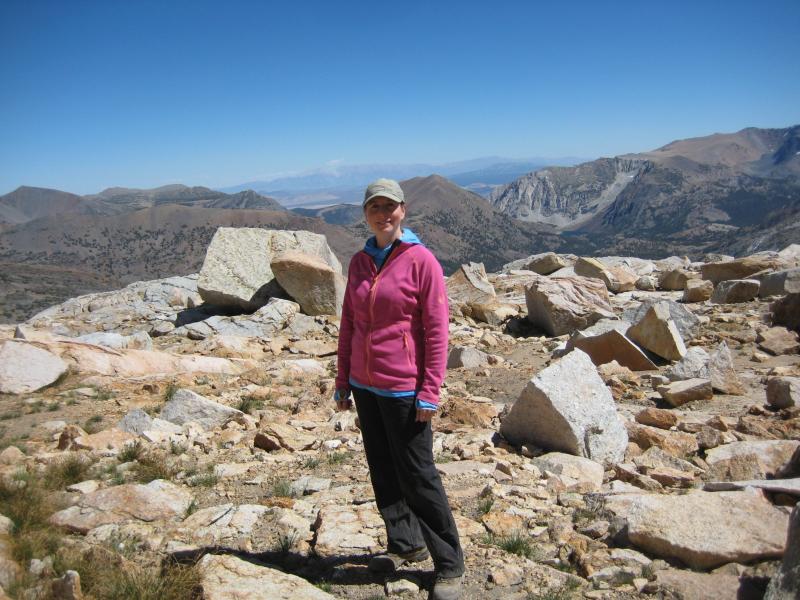 We pause briefly, then continue up the steep slope to the summit plateau. This slope has a web of trails, and some of them lead to steep/tricky moves. At one point I look down and Y is stuck at one of these moves. She's frozen - not moving, not looking around. It turns out that she's terrified by the situation, and has been keeping a stiff upper lip until now. Scrambling is the essence of this hike, and Y, while a very experienced hiker, hates scrambling and rock climbing. She realizes too late that she hasn't made this explicit. After a brief discussion, she decides to turn around, but is willing to let me continue. We decide on House Rock as a rendezvous point. Y, she tells me later, remains at that point for a half hour, enjoying the spectacular view, then descends. 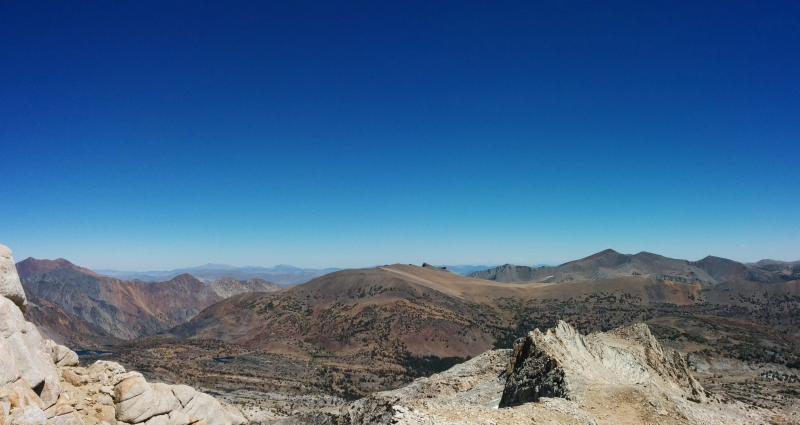 I continue, and catch up with Rob right before the final chute. We agree that the moment of reaching the plateau and seeing the immense, ominous summit block is pretty much the high point of each year.

I cross the plateau, which is a bit cold and windy. Rob stops to talk with some rock climbers who are walking off. I leave my poles by the wind-break and climb up to the summit, taking videos of the hard parts on my phone. These don't come out very good, esp. the sound.

It's fairly calm and nice at the summit, but I only stay for a minute or so. I'm feeling very good, but I know the descent is long. 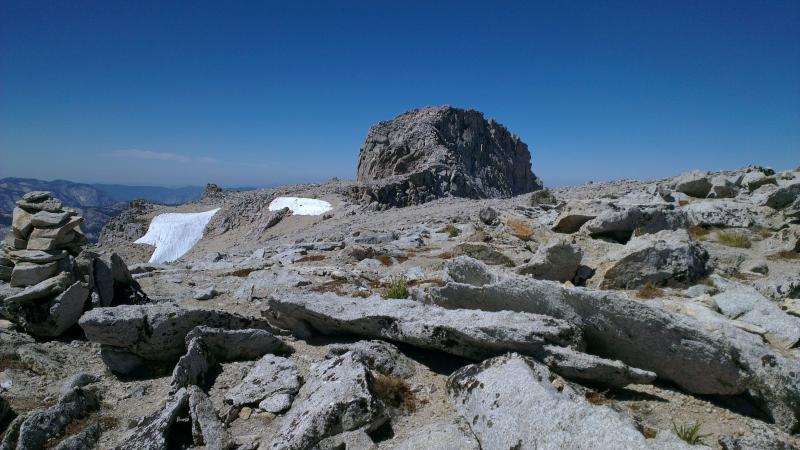 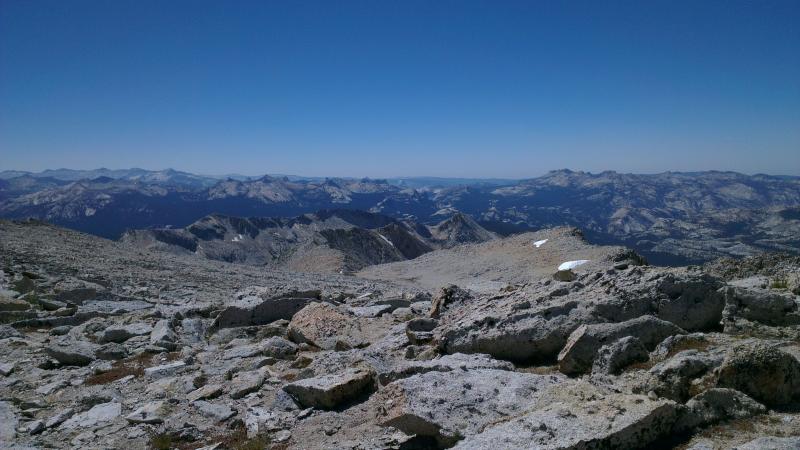 When I drop down into the chute I can immediately see Y at House Rock far below. I yell and wave my poles. About halfway down the slope she sees/hears me and waves back.

Y has enjoyed her rest, though she's still recovering from mental trauma. We descend to the plateau, trying to stay on the grass but ending up going down lots of steep rock. At one point I try to walk down a short ramp of clean rock, but my boots slip and I land heavily on my right hip, and slighly bruising and scraping my right hand. Fortunately no major damage.

We have a hard time finding an easy path into the gully; this is the one part of the hike I haven't figured out. We make it down to the rock-climbing move, which I down-climb with a bit of difficulty. Y can't tell how to proceed. Guiding her from below, I tell her what footholds to use, but her legs aren't nearly long enough to reach. Eventually I make a foothold with my hands. This works OK, but Y is uncomfortable, and presses the entire front of her body against the rock, trying to get friction like a starfish with its suction cups.

We manage to locate the use trail down the final slope and have an easy descent. 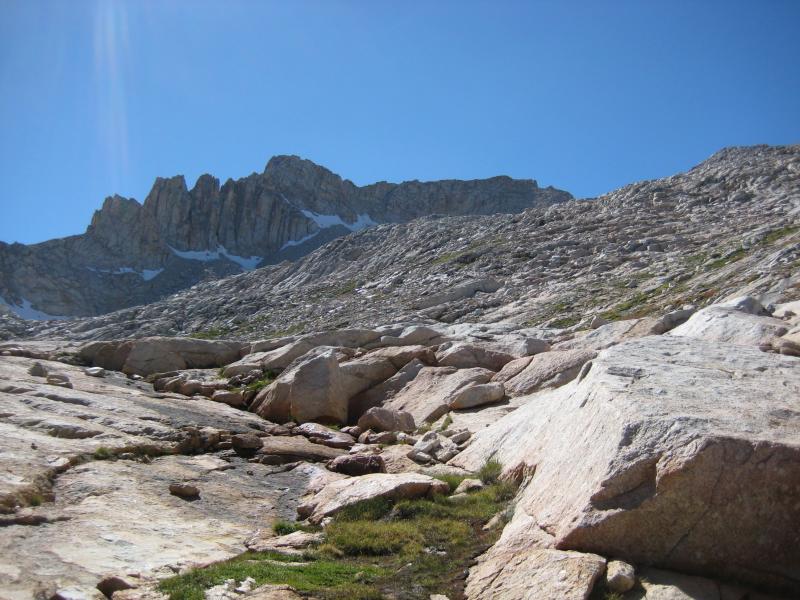 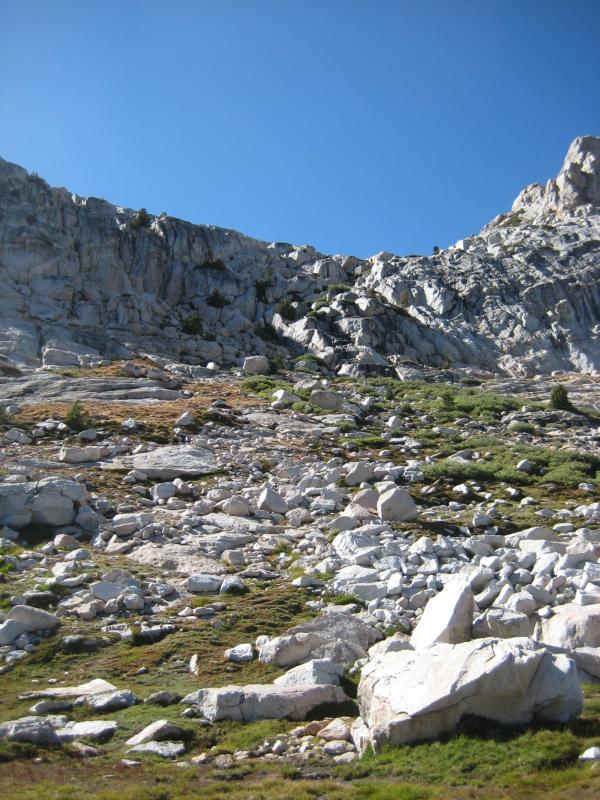 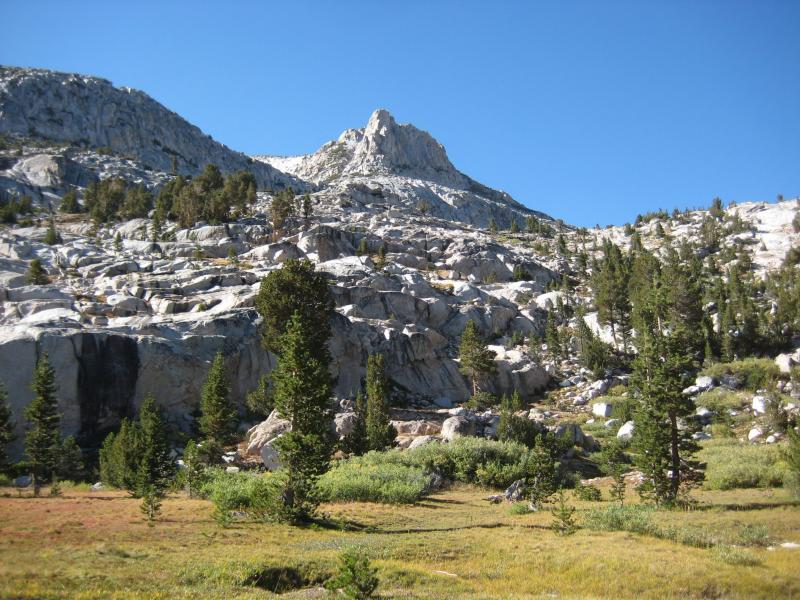 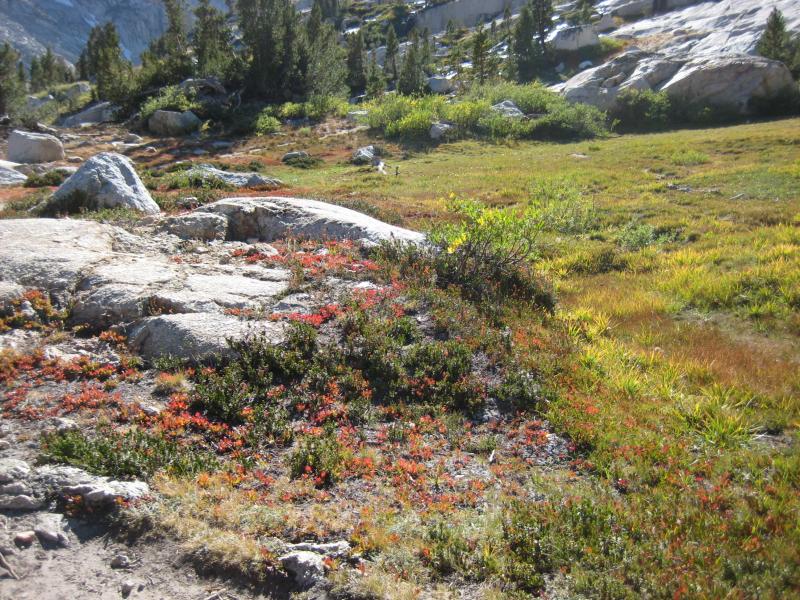 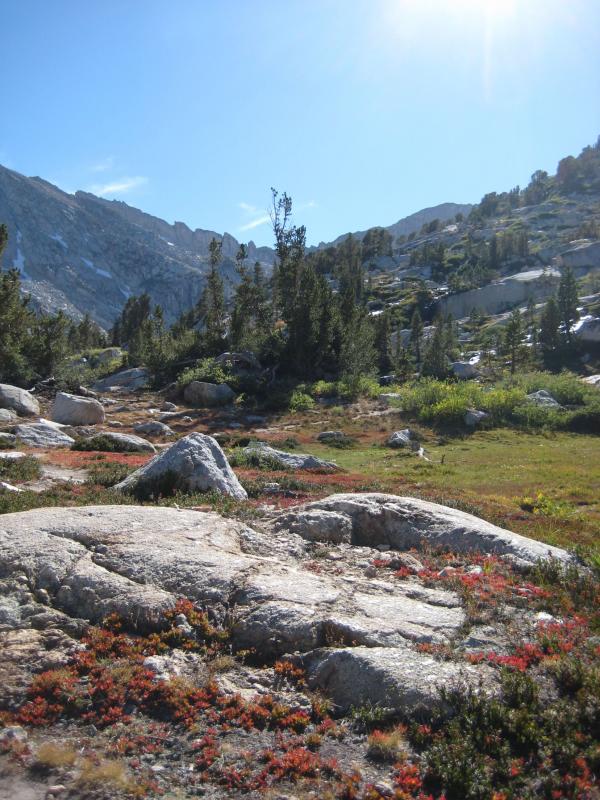 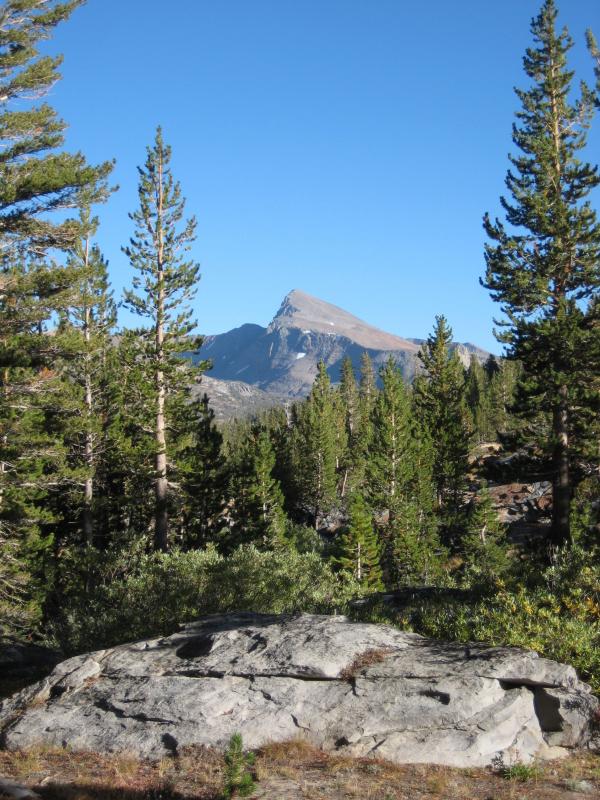 We rest for a while at the bottom, enjoying the extreme beauty of the meadow, and marveling at the height and immensity of what we just climbed.

We walk back to the car is fast and pleasant, with an unexpected delay. Another couple is sitting near the trail. They seem cranky, as if they had just had a tiff.

In the last leg of the hike, I compare my physical condition with other years. It's pretty good. There's moderate soreness in my feet, maybe from arthritis. That's the only discomfort. No sciatica or back tightness, no knee problems. My quadriceps are pleasantly sore, but they still have some bounce in them. The last bits of uphill are not a chore.

At the car, I make a few old-person noises. We stop at Tenaya Lake and I soak my feet in the cold water.

The drive out is slightly marred by the fact that we're driving directly into a brilliant sun, and Y's best efforts to clean the windshield inside and out haven't been completely successful. Visibility is often poor.

The sun eventually goes down and the rest of the drive is pleasant, although there's a long stoppage because the bridge at San Pedro Lake is being worked on and is one lane. We listen to the 2nd CD of Canadian music.

We're not hungry enough to stop for dinner, but we stop at the Wendy's in Oakdale and get two small Frostees, which to my amazement are on sale for 50 cents each! Y fills her water bottle from the high-tech soda dispenser. We walk across the parking lot to the Raley's and inspect its architecture. Y recalls a visually stunning organic food store with a mezzanine level that she recently visited in Salt Lake City.

The drive back is smooth, but we're both very tired, and there's been a helluva lot of driving on this trip. We discuss the idea of a visit where we don't go anywhere at all.

Summary: Well, now we know that Y doesn't like the sort of extreme scrambling hikes/climbs that I do. We can work around that. But we did accomplish other important things, like showing her the Mono Lake desert and the Mobil station. For my part, I loved every second of the hike, and I was delighted that I could do it with minimal physical impact at my ever-advancing age.