On Saturday Mike O'Brien and I loaded up my Civic and drove to Tuolomne meadows to climb Mt. Dana. At 13,053 feet, Dana is the highest peak within an easy trip from Berkeley. Mike and I wanted to see how the altitude would feel. We were also enticed by an account by Greg Johnson describing ascents of both Mt. Dana and the neighboring Mt. Gibbs (12,773') in one day, including the drive from and to S.F.

Dana is not an attractive mountain. It looks like God (or compatible) dumped about 3 cubic miles of jagged chunks of granite, ranging in size from 6 inches to 6 feet, on top of a high plateau, and then capriciously sliced away part of it, leaving a thousand-foot cliff on one side. No trees, no domes, just a BIG pile of rocks.

We arrived at Tioga pass at 4:30 PM Saturday and found a lovely walk-in campground, Sawmill, up the road a mile. The only problem was carrying our extensive gear, including an ice chest, the 200 yards to our site. 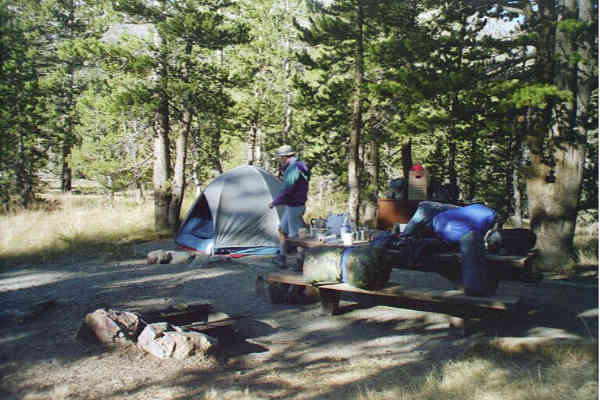 After we pitched camp, the sun was setting on a cliff uphill from us, so we headed towards it. The line of sunset (cast from mountains a mile or so west) was at the base of the cliff and rising fast, so we tried to catch it. After a mad dash up ever-steeper talus, we finally saw our shadows, and we turned to see the edge of the sun. That was good enough - we were gasping from exertion at 9,500'.

We returned to camp and made a gargantuan dinner of steak, corn on the cob, and freeze-dried enchilada casserole. We had attempted to bake a pair of potatoes on my exhaust manifold, but one of them got lost on the bouncy dirt road, ant the other refused to cook all the way through, even after an hour directly in hot coals.

As the evening become cold I realized that I had forgotten my fleece jacket, leaving only T-shirt and windbreaker. I warmed myself at the fire, and retired early to a sleeping configuration suggested by Mike: mummy bag and sleeping pad WITHIN a jumbo car-camping bag. Nice and warm, and you don't fall off the pad. In spite of being warm, I didn't sleep well - little naps, interrupted by one discomfort or another. Nonetheless, I felt OK the next morning, and we had oatmeal and espresso.

We set out from Tioga Pass (9,945') at 10:10 AM. The trail crosses the narrow flat and goes directly up a broad slope, leading to a plateau about halfway up. 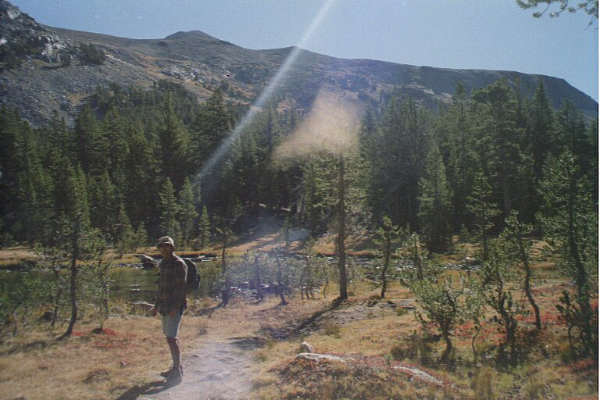 A lake near the trailhead. Summit barely visible in back. 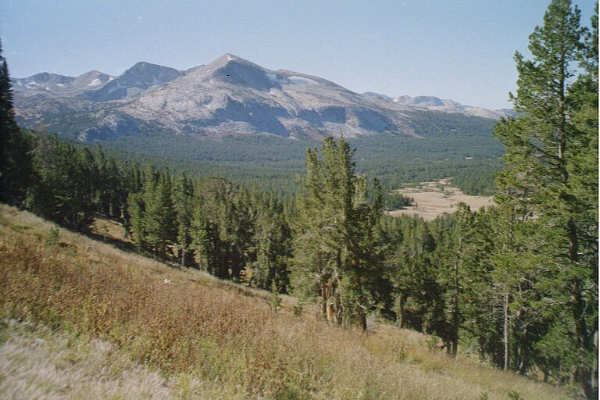 A bit of Dana Meadows is visible.

From there the going becomes increasingly steep and rocky, and the trail mostly disappears. The last several hundred yards is a boulder scramble. 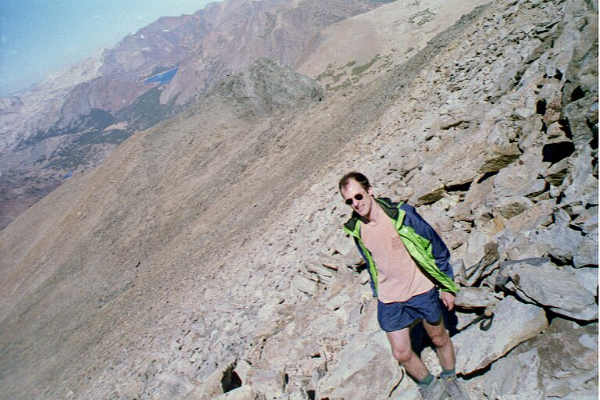 Art Photography taken to a new level by Mike. 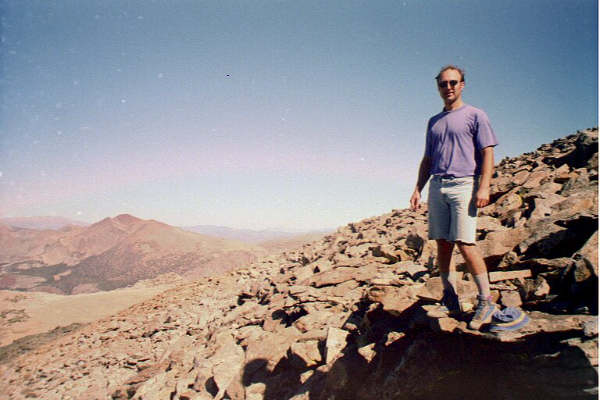 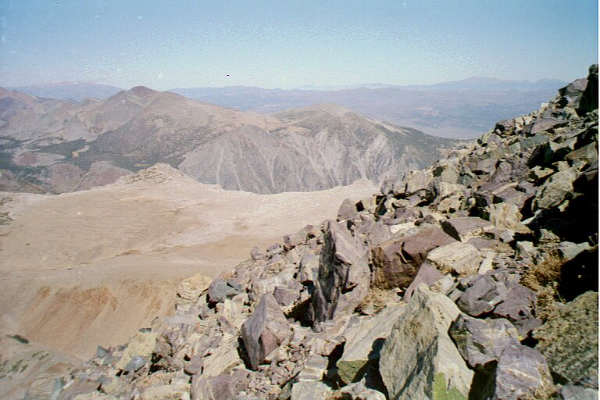 Hiking at high altitude is, for me, similar to distance running. Monitor the state of the major systems: lungs, heart, muscles. Push until something complains, then ease up. If the heart is beating too fast, take some deep breaths and slow down. If a headache looms, relax the facial muscles, let the neck relax and the head loll, and it dissolves. Let the locus of consciousness move from head down to quadriceps. When boulder-hopping, think like - become - a rock. Where would I be stable? Where would I tip or dislodge something? It's very Zen-like, and I enjoy it immensely because it takes me completely away from my usual frenzied conscious routine.

Resting only once, we reached the summit at 12:25 PM (the same time Greg Johnson took, and a robust 1,381 vertical feet per hour). It was sunny and clear, cool (in the 50s) and breezy, but calm on the summit. We were looking directly down into Mono Lake, and could see 50-100 miles in all directions. We rested and ate a small lunch. 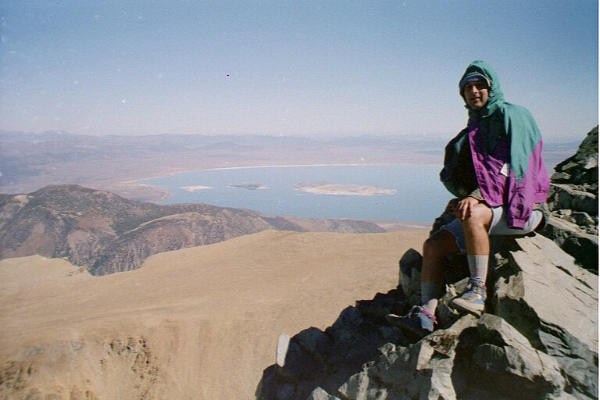 Near the top. Mono Lake in background. 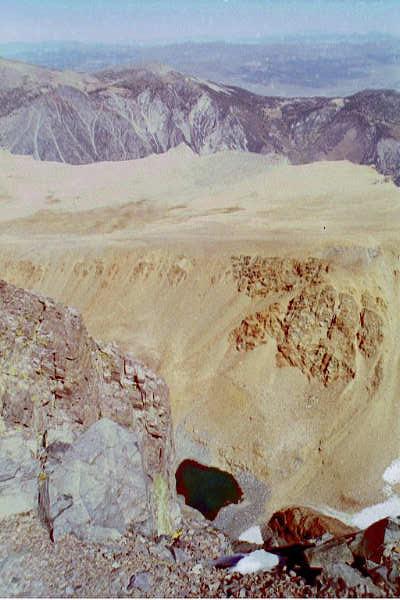 Looking down from the summit. Small lake at bottom. Ay Yi Yi!

We had ascended the north face of the mountain. Looking south from the summit, there was a huge saddle about 800' below. At the far side of the saddle, to the right a long ridge led to Mt. Gibbs; to the left was a ridge surrounding the amphitheater below Mt. Dana. Our plan was to descend to the saddle, follow the ridge to Mt. Gibbs, find a route up its steep summit block, then descend its moderate northern flank into a valley between the two mountains, which would take us back to Rt. 120, and to our car. 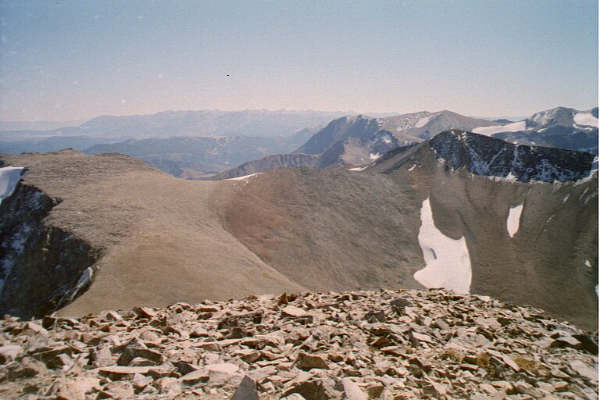 The saddle viewed from summit. Mt. Gibbs at right, above snowfield.

We left the summit at 1:00. The descent to the saddle was brutally steep, and on the nastiest kind of sharp, loose rocks. We made the mistake of splitting up - Mike wanted to inspect a snow chute in the amphitheater, I just wanted to find the easiest route down. Fortunately we both made it OK, but I was physically and mentally tense the whole way, and was exhausted at the bottom. 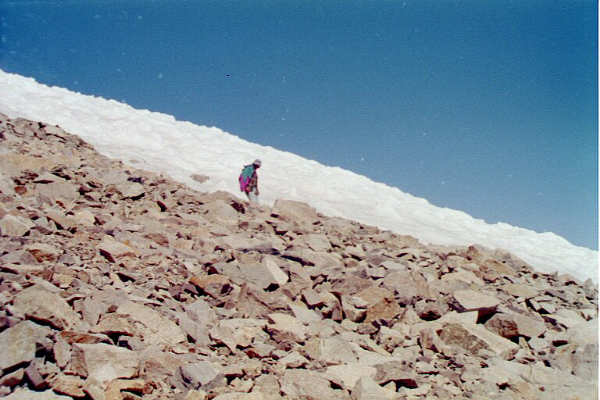 A strong, cold wind blew across the saddle, which was surrounded by pockets of snow. It was a tundra environment covered with an amazing density of lichens and tiny dry plants, and was completely flat except for a large, weathered block of granite sitting incongruously in the middle. 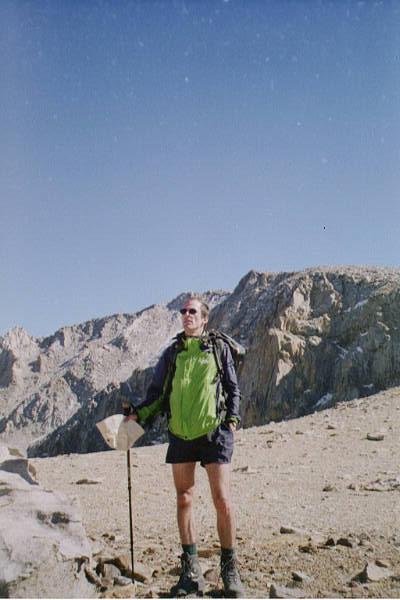 On the saddle, next to incongruous rock. Mike climbed to the point just right of my head.

We huddled behind the rock, out of the wind, for a few minutes. Mike and I agreed that Gibbs was out of the question; we were too tired. Mike wanted to climb the other (left) ridge for a few hundred yards, to reach a knob on the amphitheater rim.
I told him to go ahead, that I would wait for him to return. This was another mistake: it took him 30 minutes (2:05 to 2:35), he was out of my sight most of the time, and I got a bit cold. However, I was rewarded by the discovery of a perfect, beautiful Indian obsidian arrowhead sitting in the granite sand. 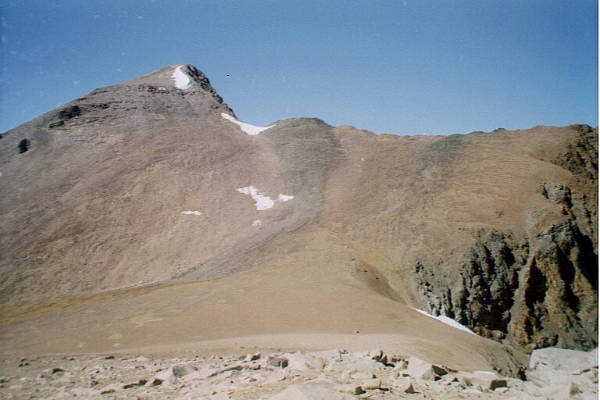 Looking back at Mt. Dana from where I waited. Our route went through lower snowfield. Incongruous rock is a speck in the middle of saddle.

We headed down the saddle towards the valley. Numerous little streams developed, and suddenly we were walking on springy, 6"-thick grass. 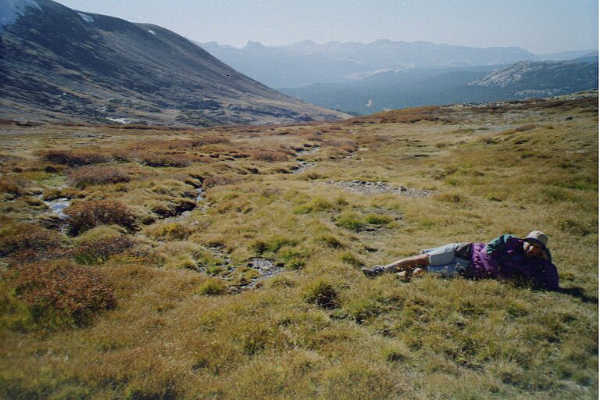 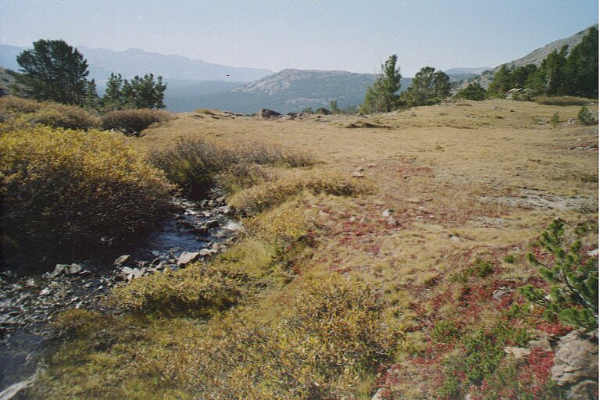 Colors were much more vivid than in photo.

Unfortunately, we had a navigational dilemma: as we descended into the valley, it became clear that it veered a bit to the West, away from our car. It might bring us to the highway several miles west of the pass, and we could lose a lot of altitude.

At the top of the right slope of the valley was a notch that looked like it might lead back towards the path we had taken up Mt. Dana. However, the notch was rocky, and I had unilaterally decided that I wasn't doing any more rocks. I was getting a little concerned - it was late (3:30) and, while we weren't lost per se, there was some uncertainty.

Mike wanted to go high, I wanted to go low. We discussed it at length. In the end we compromised, and it worked out perfectly. Instead of continuing down the valley we walked along its right slope at constant altitude. This led us into a pine forest which, because this is the Sierras, could be walked without problem.

The slope turned East, wrapping around the enormous bluff at the base of Mt. Dana. Finally, we could see the huge Dana Meadows at the base of the slope, and the highway beyond them, and we knew we were home safe. We angled down across some avalanche-scarred slopes, came out on the edge of the Meadows, walked East about a mile, and we were at the car at 4:45 PM.

We had an ice-cold root beer from the cooler, Mike dipped his feet in a pond (his post-hike ritual) and we set out at 5:00 PM. After a lovely drive across Yosemite, into the sunset, and many rounds of the usual car games, we were in Berkeley at 9:45 PM.

The hike was a total success, though I learned lessons in preparedness (bring all your clothes, and bring a map even if you don't think you'll need it). Mike and I felt fine, no altitude-related problems at all; we feel fairly confident that a 1-day ascent of Whitney is doable.