Rich Kraft and I wanted to mountain bike in Moab Utah, but it's too late in the year now, so we decide to go to Death Valley instead. Everything is set - plane, motel, car - when a giant storm system moves in, drenching the entire state with torrential rain, so we decide to leave the bikes at home and just hike. Fortunately the rain lets up just before we leave.

We arrive at OAK about an hour before our 8:50 flight, but things go badly - Rich has a bag that's too big to check, so he gets in the incredibly long checkin line. Figuring it's easier to get 1 standby seat than 2, I go to the gate (the most remote from the Southwest terminal), wait for Rich until the last minute, then get on the plane. Meanwhile (I learn later) Rich has been detained for special treatment by the security forces. He eventually makes it through and gets onto the next flight, but spaces out and gets in a line for an entirely different flight, thus nearly missing his own.

I arrive in Vegas, pick up a message from Rich (who received the same message - they swapped the To and From fields), run the gauntlet of slot machines and blaring video walls pimping the current casino shows, search in vain for any decent food, and hunker down with my laptop. Rich arrives earlier than expected, but his bag is on the 2:10 flight. He passes the time by smooth-talking his way into the airport's 24 Hour Fitness gym.

We pick up our rental car - a brand new Taurus - around 3. We get vague directions out of town. Tropicana, 10 North, 95 South. We drive on and on through sprawling suburbs. We stop at a gas station to verify directions. Back up 95, Left on 215. OK. More miles, more time. A sign appears - 'Airport 2 miles'. Somehow we've driven in a giant circle. By now it's 4 and the sun is going down.

We stop again, buy a map, and get directions, simple and correct this time.

We drive for an hour, then stop at a casino in Pahrump for dinner. A giant neon sign asks 'What would you do with 1 million points?' (Rich: 'I'd give them to the pointless'). We have the buffet for $7, which is not bad. Rich consumes large quantities of beef. We watch the first 2 series of the Orange Bowl.

We continue North on 178; after 10 miles we pass a sign saying 190 is closed, i.e. you can't get to Death Valley this way. So we backtrack, and go the longer route through Shoshone.

In the park, recent rain has covered the road here and there with mud and large pools of water. Driving becomes interesting. Rich drifts off, then is jolted rudely awake when I drive through small lake. We arrive at Stovepipe Wells and check in. Most of the roads in Death Valley are closed due to flooding, so our options will be limited.

Rich has slept badly. Apparently he was forced to act as a kind of human thermostat throughout the night, getting up to turn the heat off when it reached 100, and back on when it got down to 30.

We hike up Mosaic Canyon - HIGHLY RECOMMENDED; DO NOT MISS. Beautiful swirly marble formations and Breccia that's like a display case of interesting rocks. Rich and I wax rhapsodic about the beauty of nature, compared to which all human art is pallid dreck.

Rich's new credit-card-sized digital camera loses all its pictures each time he turns it off. Finally he finds the right protocol.

The trail seems to dead-end at a dry waterfall with some incredible zebra-stripe rock next to it, but we find a way around it and continue. Then it dead-ends for good at a larger waterfall.

We meet a Scottish couple with a wood-and-brass large-format bellows camera, photographing some marble. We meet another lady with a Nikon and direct her to the waterfalls.

The ground is littered with millions of beautiful rocks. I break federal law and take a couple, and also a tiny plant with amazing tree structure.

Back at Stovepipe Wells, have some crappy sandwiches at the general store, and I buy batteries for my camera (4 AAs for $8.24 - ouch!). We drive to Golden Canyon and walk up the trail. 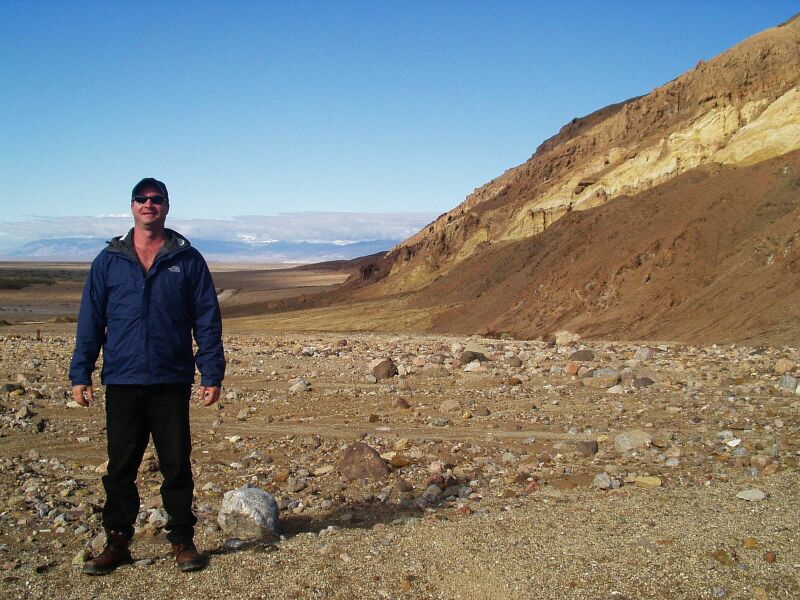 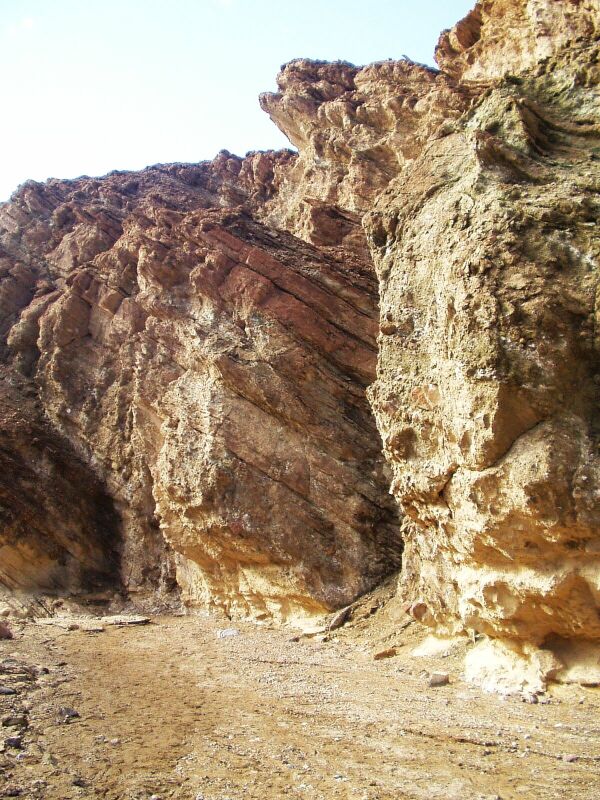 At one point they paved the trail with asphalt. Bad move. Remnants are visible at left. 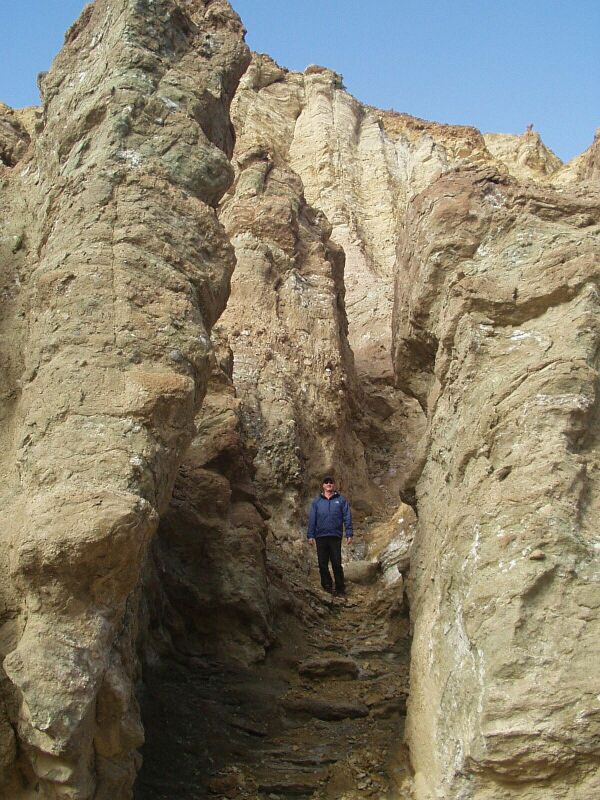 Rich ascends a side gully that we named 'Piss Canyon' 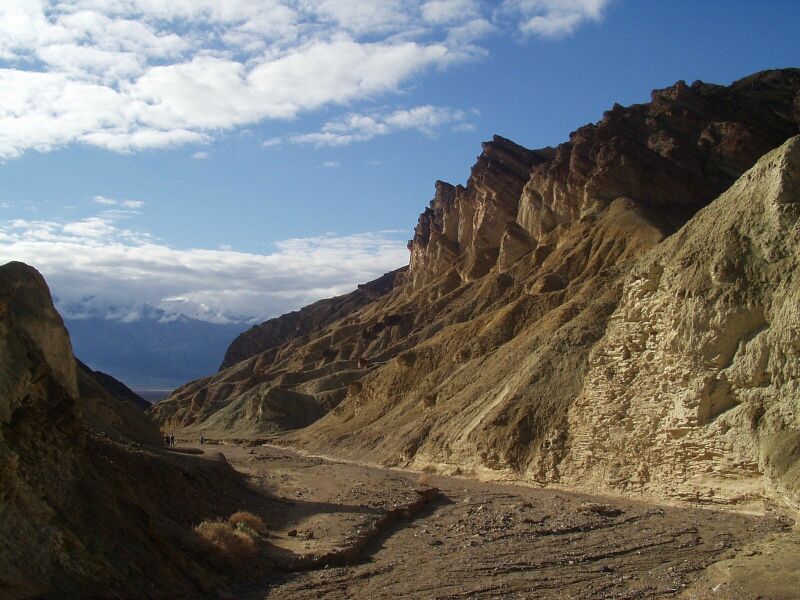 Wash in upper part of canyon 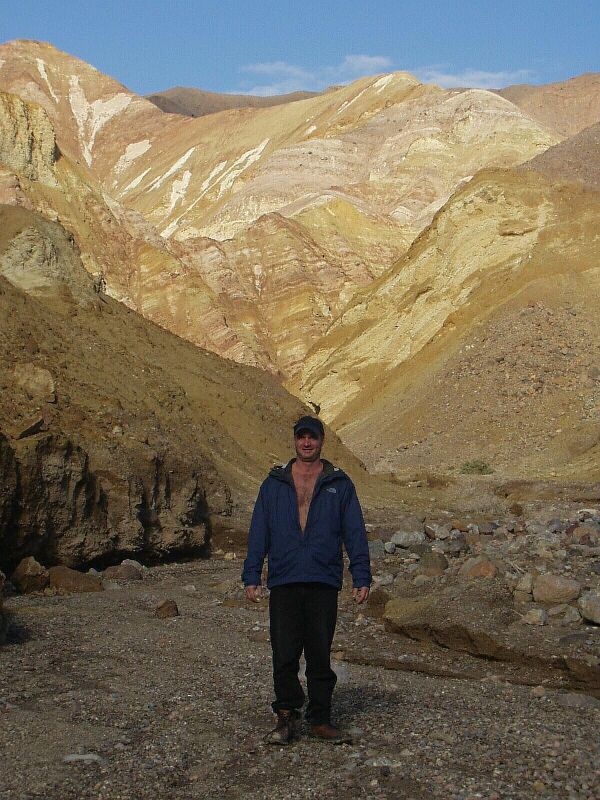 Why they call it Golden Canyon
We take a side-trail that goes past the base of Anvil Rock and thence to Zabriskie Point. We turn around just after Anvil Rock.
click image for hi-res version 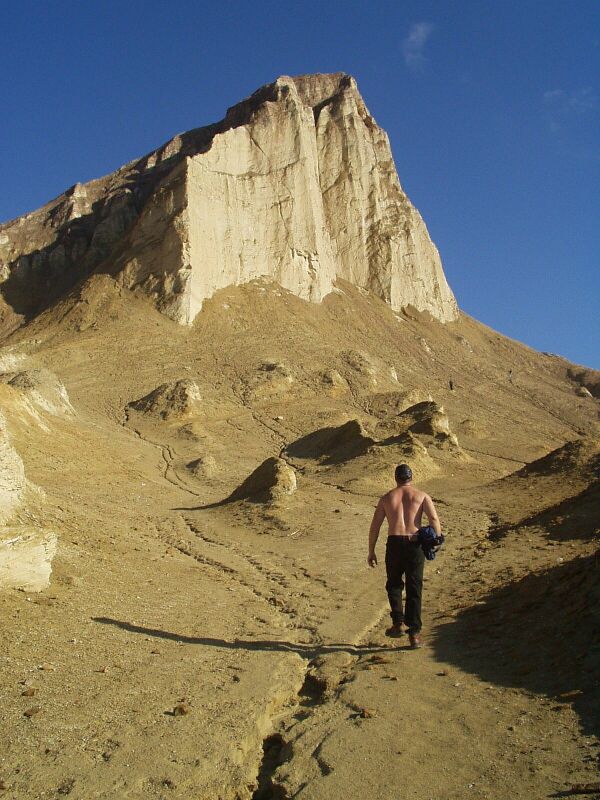 Anvil Rock. Rich thinks his back looks hot in this photo. 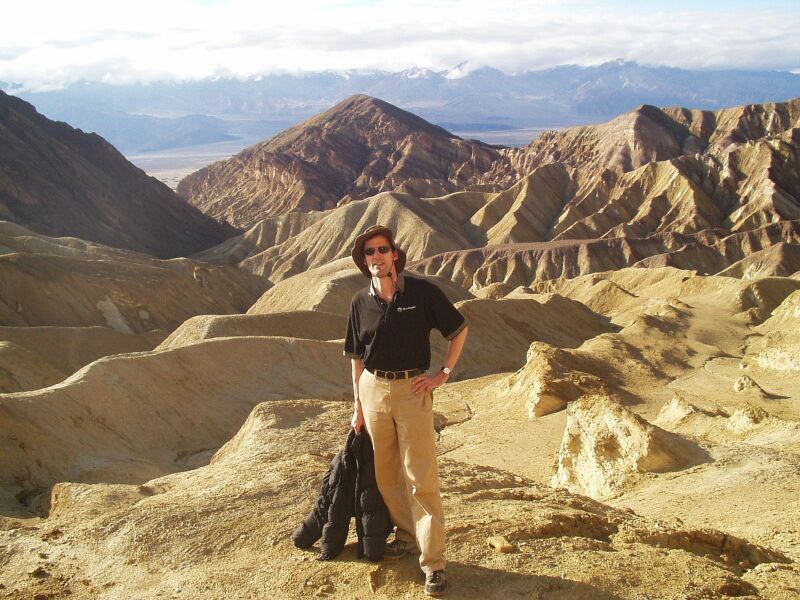 Just past Anvil Rock, looking back 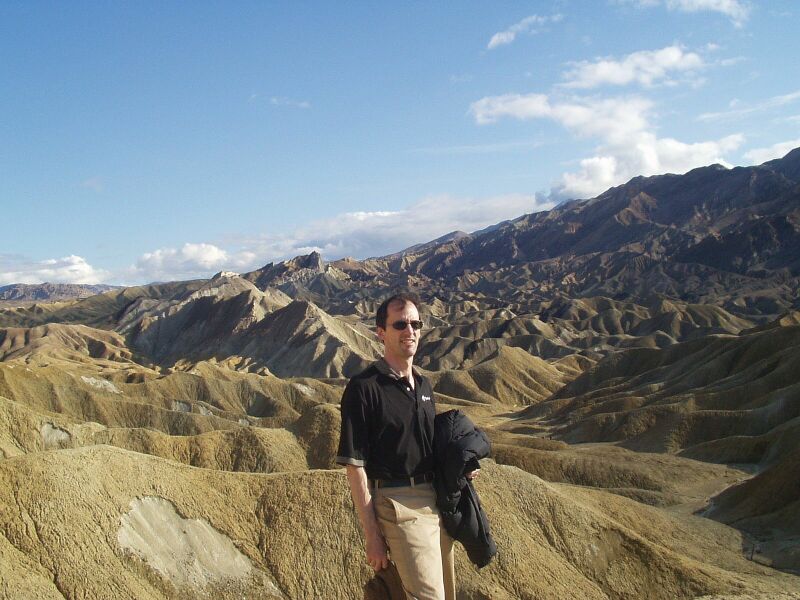 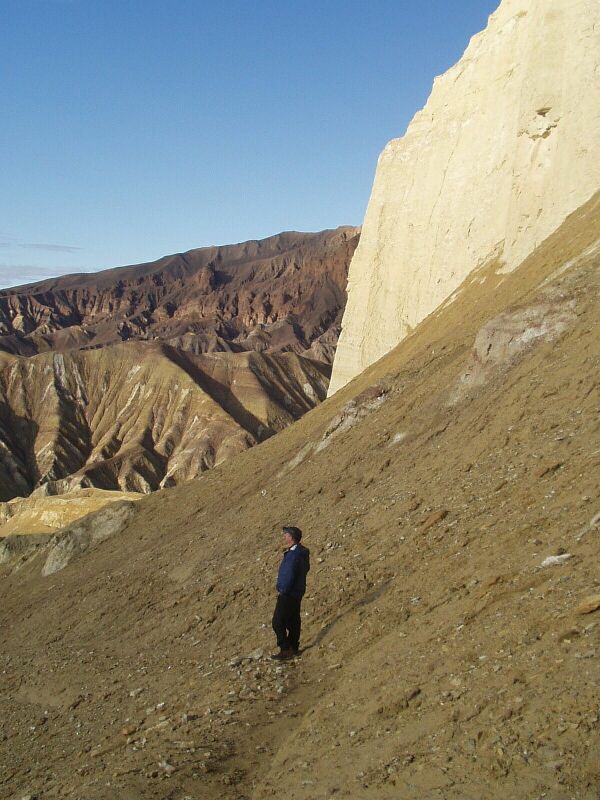 We liked this palette

On the way down we meet the camera lady again. I urge her to step down from the dirt ridge she's on, which collapses and she falls to the ground, but is OK.

We proceed to Badwater, where Rich collects some rocks for me to skip. 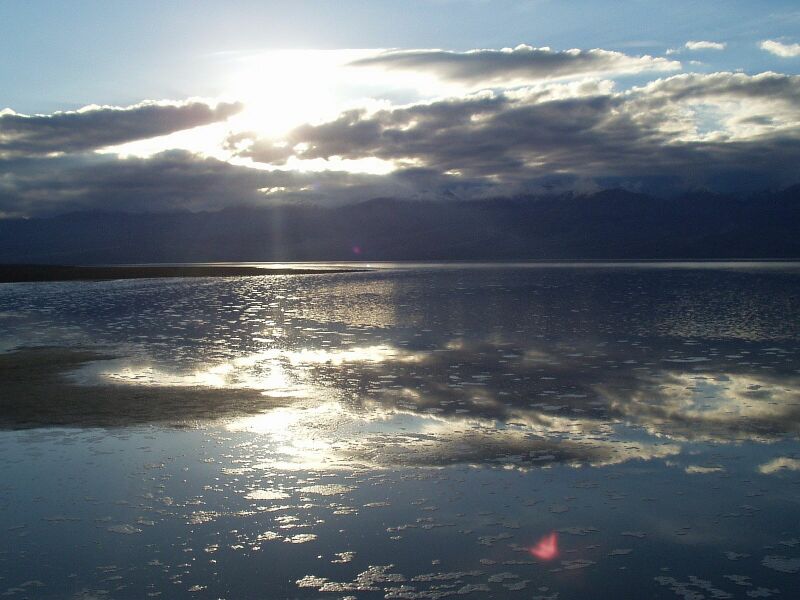 Looking west. Normally this is a dry salt flat. 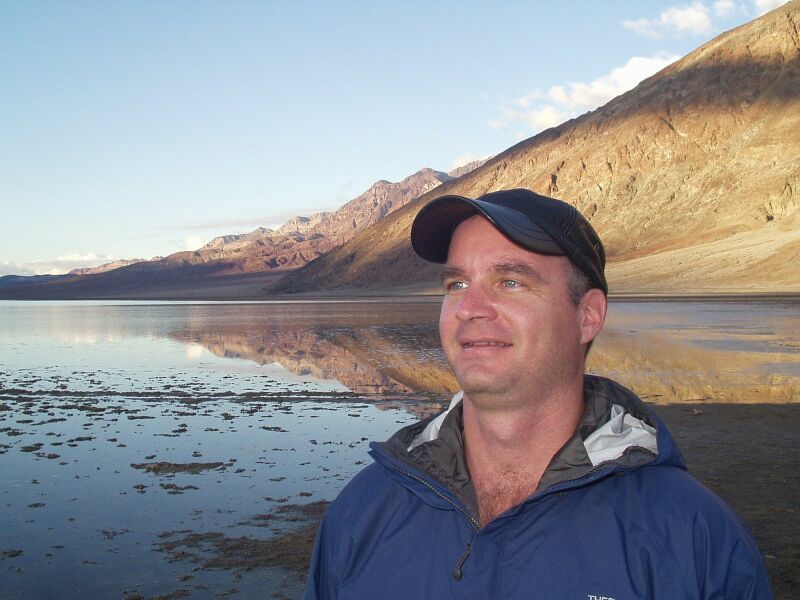 Looks artificial but is not 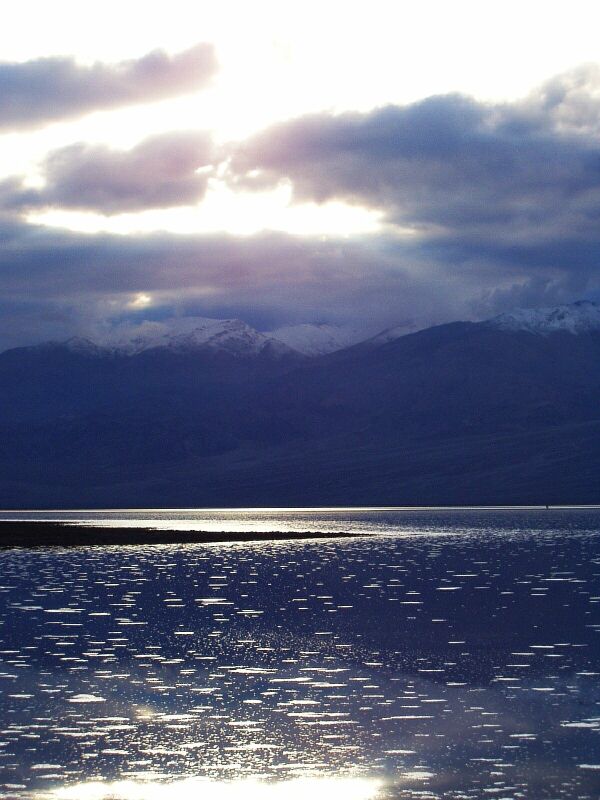 Mountains near Telescope Peak. Colors are fairly accurate. Note pinkish sunset and faint blue due to scattering near peaks

Back at Stovepipe Wells, we tell the clerk about our thermostat situation, and he sends over a 'maintenance person', who turns out to be an elderly, cantankerous guy with a vest saying 'Security'. He claims that the thermostat is functioning normally - after all 'the room is small and heats up quickly'. Rich justifiably ignores this and asks the guy if he can fix the thermostat. The guy mutely points to the word 'Security' on his vest, and when pressed on the matter says, with an increasingly surly edge to his voice, that he can change light bulbs but that's about it. Before things turn ugly I thank him and say we'll look into switching rooms.

We have dinner, move to the next-door room, whose thermostat works admirably. There's a connecting door, which we leave unlocked so that we have use of both rooms via 'quantum tunneling'. 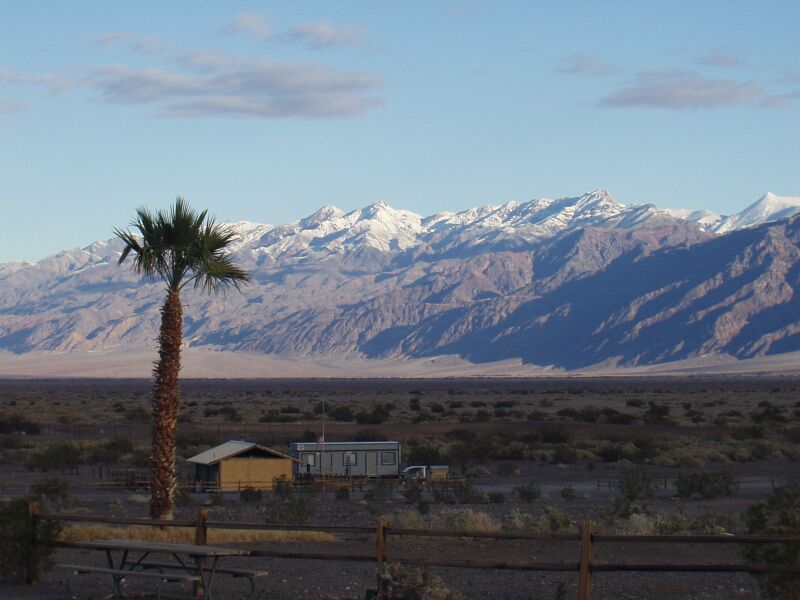 It's a beautiful day!
After breakfast we go to Grotto Canyon. There's a 2-mile dirt approach road, this one fairly dicey and marked as Jeep-only, but the Taurus is up to the task (although Rich is a bit nervous).
click image for hi-res version 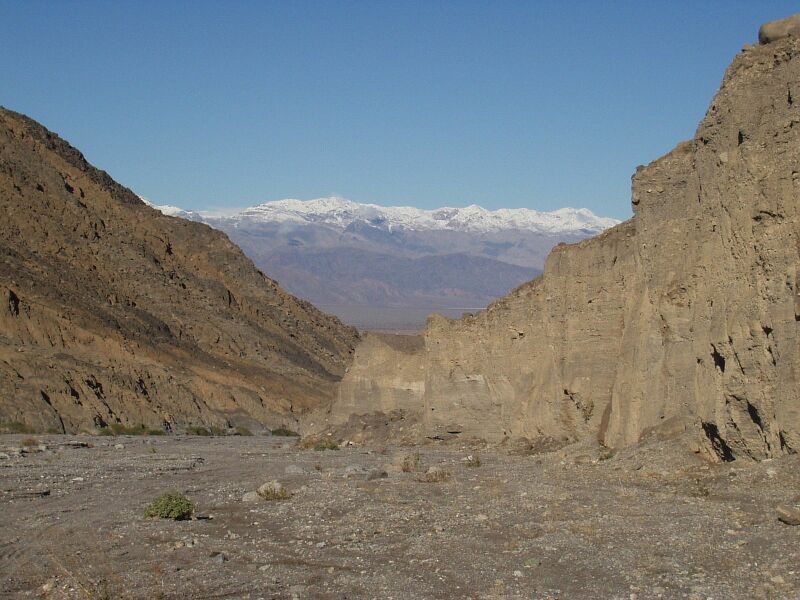 Looking back towards the Panamint Range 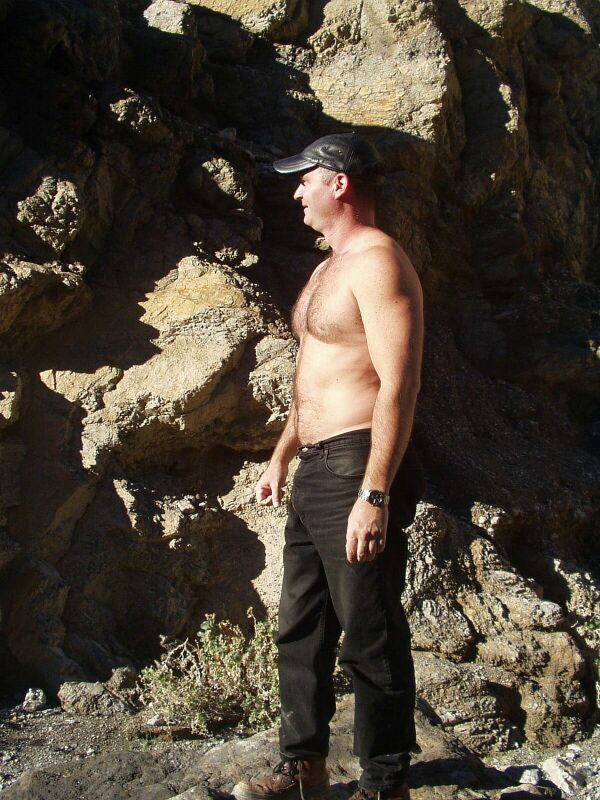 Does Rich use The Clear?

The road transitions to a path along a sandy wash, then dead-ends in an amazing grotto, with a dry waterfall that is about 10 feet high and could probably be climbed. But it would be slightly dangerous, so we look for alternatives. 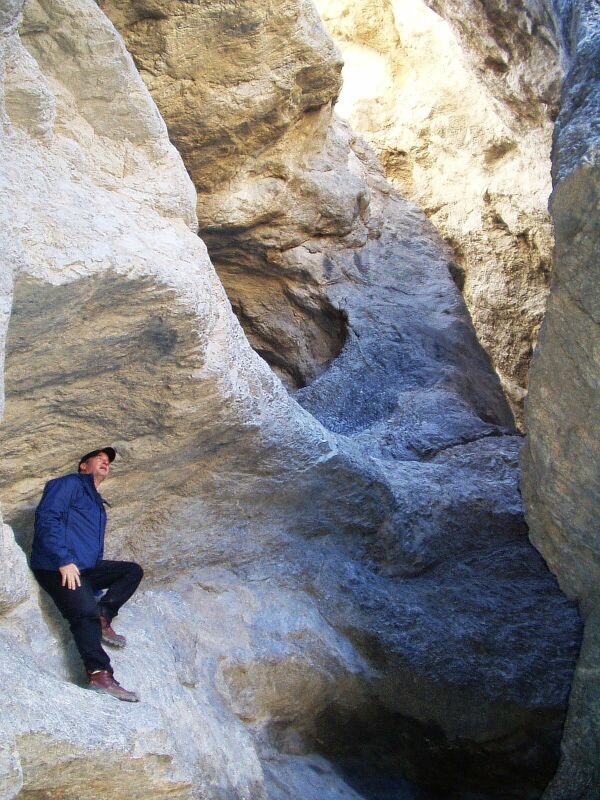 Waterfall is hidden at right
First we go up the gully to the right, which has its own mini-grotto.
click image for hi-res version 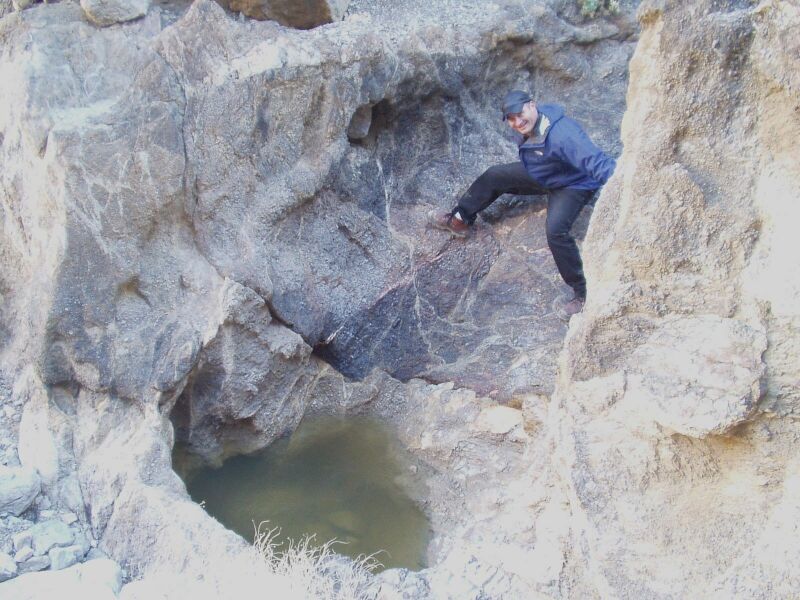 Then we backtrack and, following some cairns, go up the ridge to the left. This affords a view of the spectacular section of wash above the main grotto, but there's no way to descend down to it. There's a second canyon farther left, which looks interesting and accessible with some difficulty, but it's around 11:30 so we decide to head back. 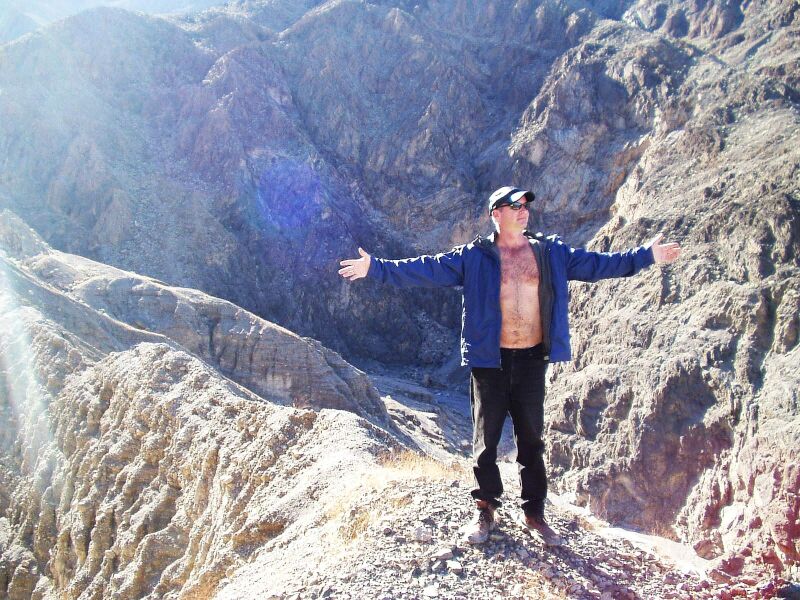 Rich chose not to continue along this ridge 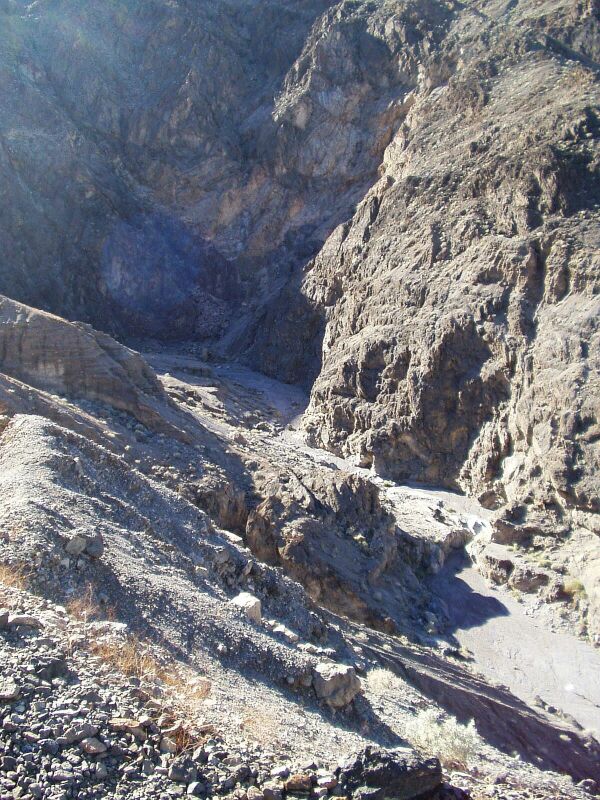 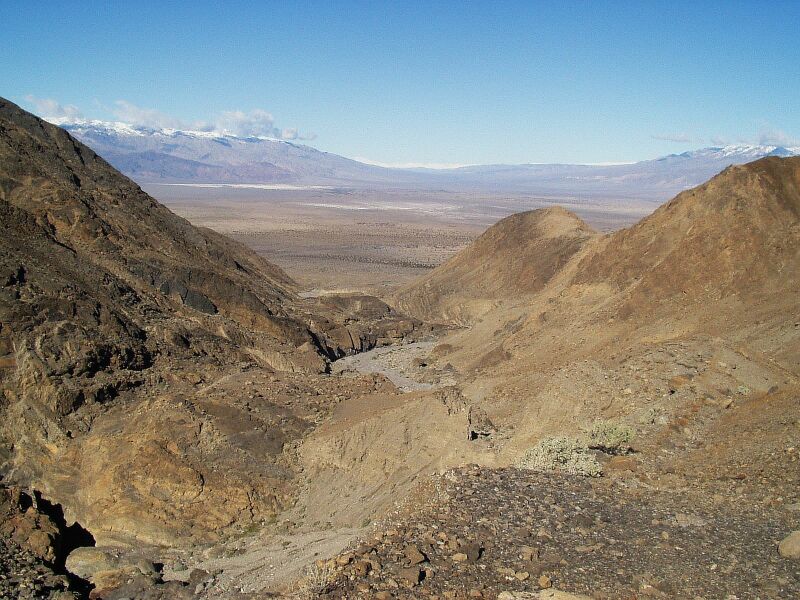 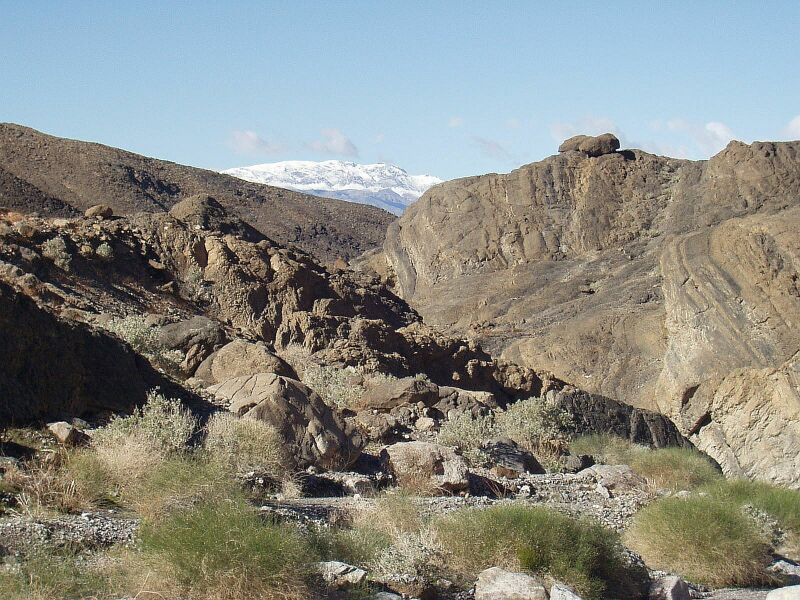 The drive back to Vegas is spectacular, and includes:

Back to the grotesque human infestation known as 'Las Vegas' around 4. We head for the Paris casino, whose buffet is favored by Rich. It doesn't open until 5:30, so we cross the street to Bellagio, which is also quite good ($26 each). I moderate and avoid painful distension.

The guy at PayLess Rent-a-Car is obviously suspicious of the mud and dust that cake the now-not-so-new Taurus, but he can't find any actual damage.

A short but extremely good trip. We agree to return to Death Valley during a season when more roads are open. 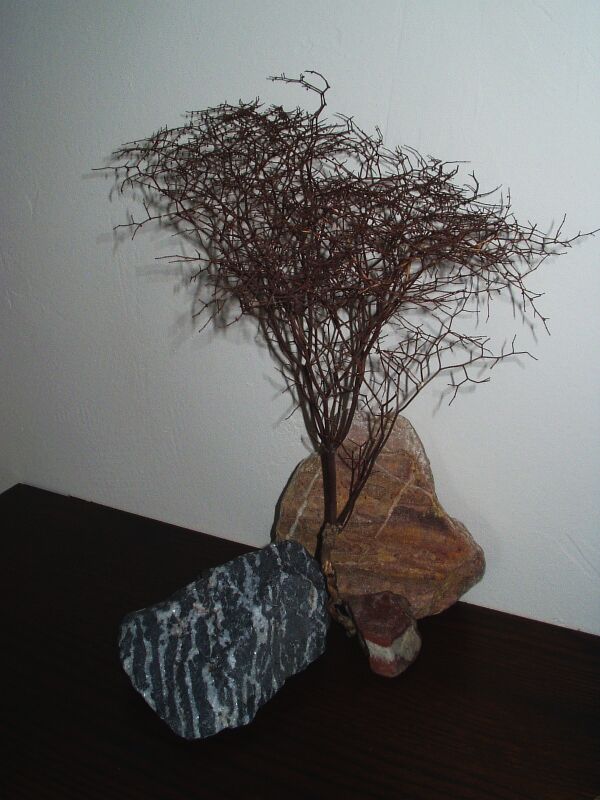