After hearing about my recent trip to Death Valley with Richard, Dave G. wants to go too, and we settle on late March, when there's a full moon and a solstice, and the wildflower bloom is the best ever. DG enlists his pilot friend Peter G. We investigate flying down in PG's light plane, but there's no car rental at the Death Valley airports, so we arrange to fly to Las Vegas and rent a 4WD vehicle there.

PG and I meet at OAK at 9 PM, fly to Las Vegas, and meet DG in the airport. A series of delays ensues - baggage, rental car bus (Hertz/Avis mixup), difficulty changing our fueling option, slow service getting beer and munchies at the MGM Grand - and it's 2 AM by the time we get to bed at the San Remo.

We get up at 7 (groan) and eat at the buffet. On the way out of town, we buy a propane canister at Outdoor World, an immense hunting/fishing store with its own archery range, waterfall, and climbing wall. 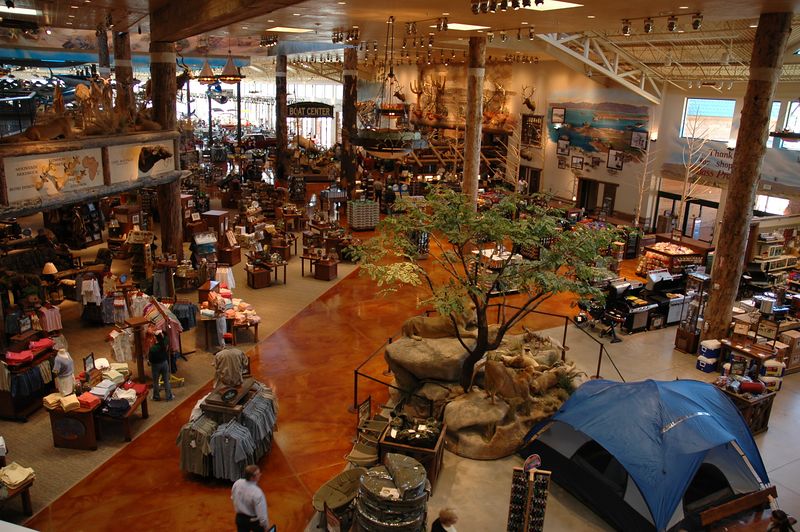 A small fraction of Outdoor World

We drive by way of Pahrump and Shoshone. 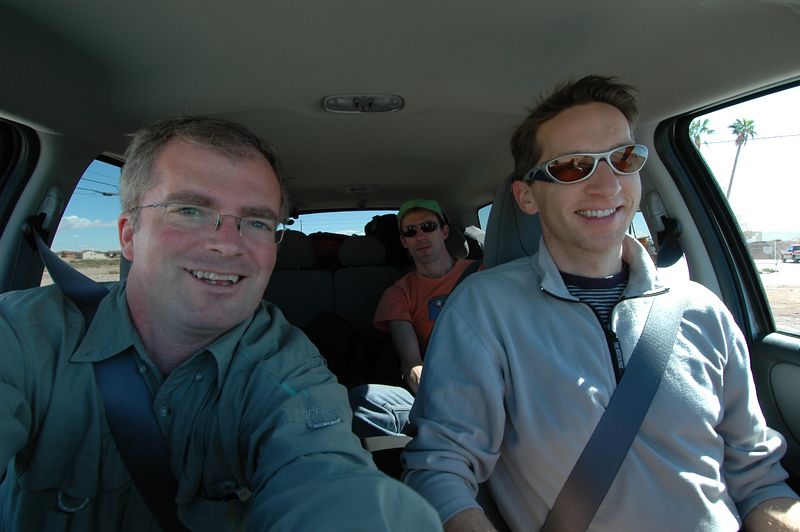 That's me in the back seat
My favorite purple/ivory mountains are tinged with green, which detracts a bit from their color scheme. As we near the park the wildflowers start - mostly bright yellow, also white, pale yellow, light and dark purple. 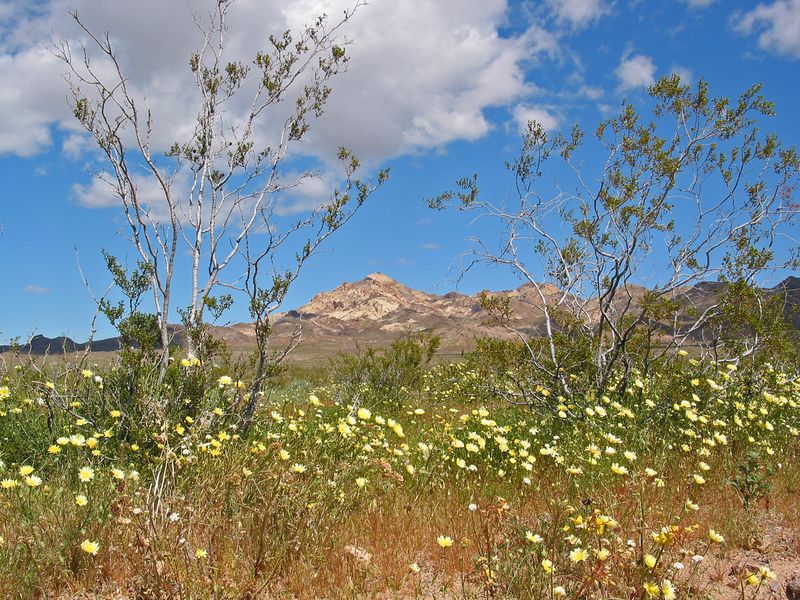 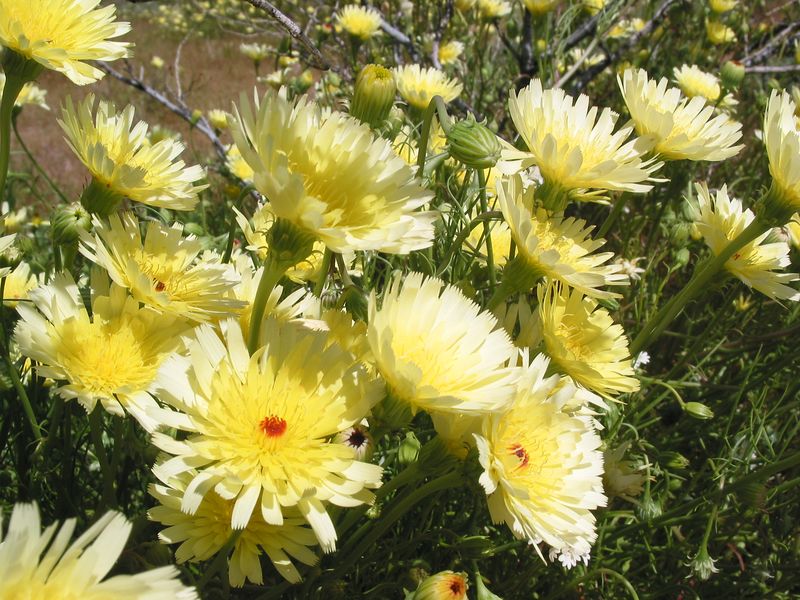 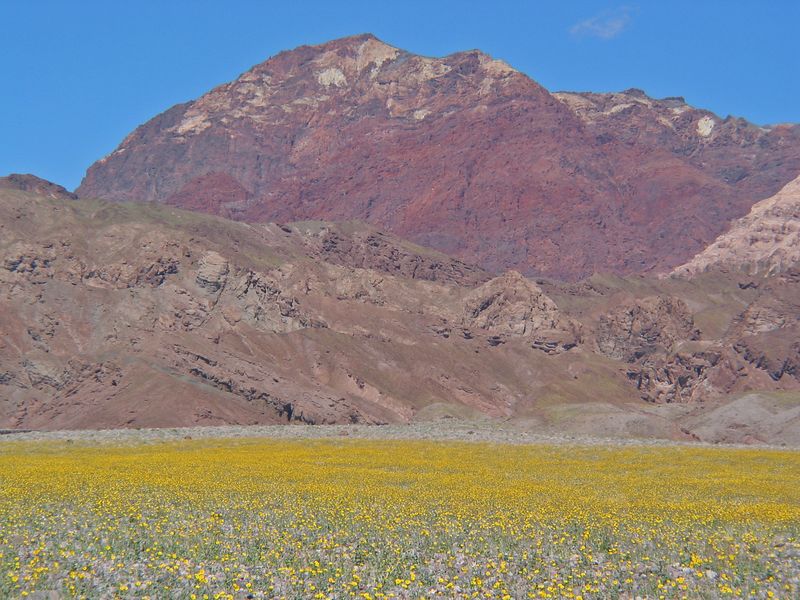 Scrubby plants are draped with oddly moist, rubbery orange filaments (Christian Aeschliman informs me that this is called Dodder). 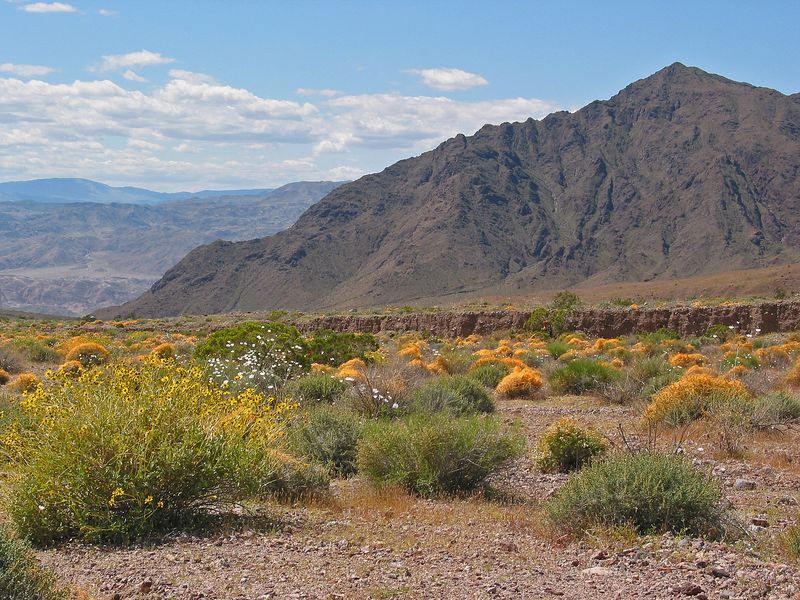 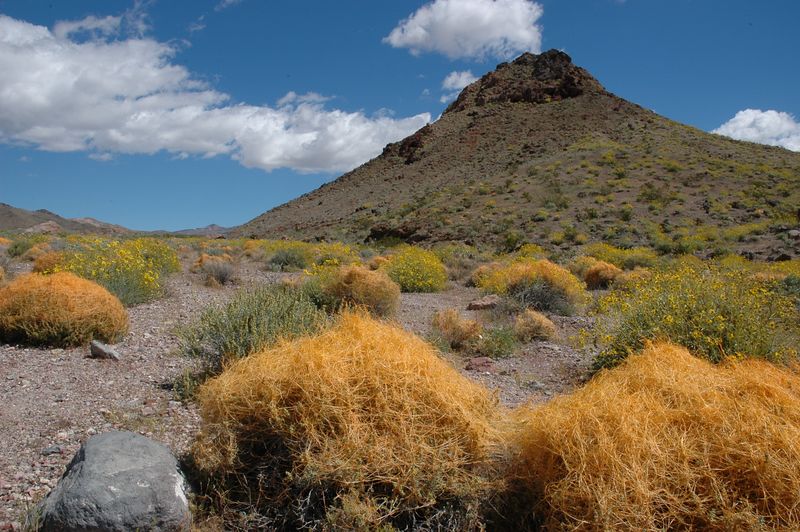 DG and PG are digital photography wonks, and DG in particular has brought an arsenal of lenses for his spiffy Nikon. There's a lot of pulling over and standing on the hood for those once-in-a-lifetime shots. PG also has a very fancy GPS, into which he has downloaded hi-res topo data of the region. At first I dismiss this as gadgety sissiness, but it repeatedly comes in handy, showing us mountain names and heights, navigating us through sketchy dirt roads, and finding various secret attractions. PG is also a big fan of Geocaching.

We admire snow-topped Telescope Peak, which DG and I climbed a few years back (though, as DG points out, it's not a peak so much as the high point on a ridge line). 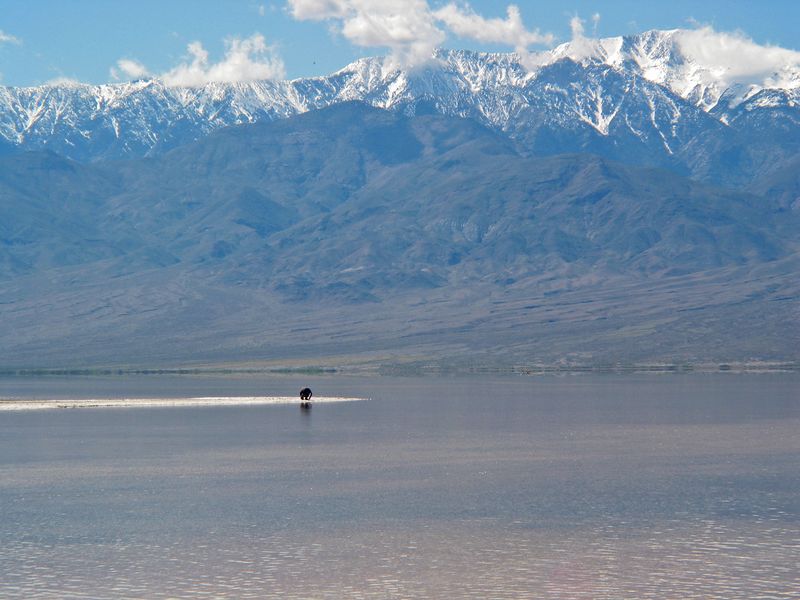 Telescope peak
We stop at Badwater, which is still a giant lake. I attempt to climb up to the Sea Level sign while DG and PG explore the flats, and chat with a family with 3 teenage girls. 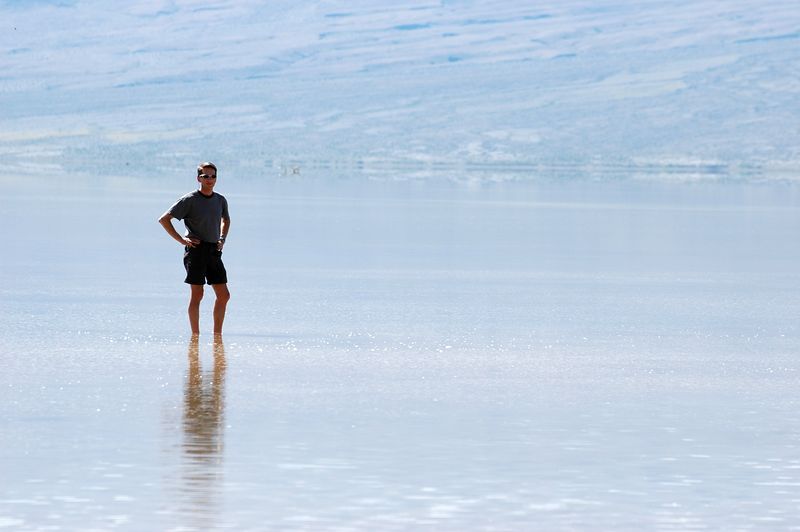 PG at Badwater, getting crusty

We stop at the ranger station at Furnace creek. The wildflower bloom has been getting lots of media play, and there are hordes of tourists. The only available campsite is in a barren gravel parking lot across the road. A sympathetic ranger advises us to camp just outside the park on the Panamint side, but to avoid private land 'cause the land owners are ornery and pack guns.

We proceed to Stovepipe wells. Like locusts, the tourists have stripped the shelves of the general store nearly bare. A box of firewood is marked Free, so we take it. DG forces me to stop acting like John Muir, and to buy food for dinner. We drive up the hill to the Mosaic Canyon trail and hike up it. DG goes up a trail along a thin ridge to the right side, which looks scary, but PG and I follow. The sketchiest part is the end, where the cat-like PG jumps down off a 10-foot ledge. I climb down, then we grab DG by his shins and lower him off, to the amusement of some passersby. 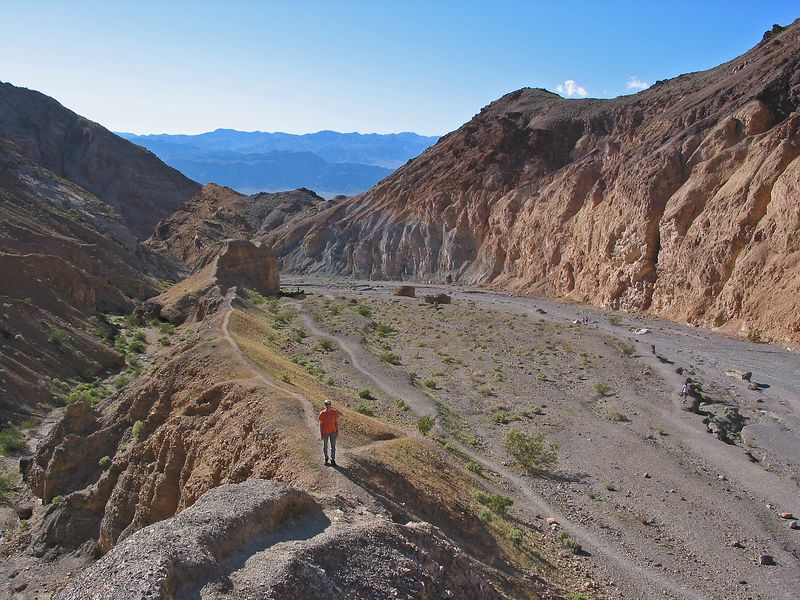 PG and I scale the 15-foot wall near the top of the canyon. We chat with some wildflower buffs from Alaska, then decide to turn around because the time is getting on (4 PM or so). We run into the teenagers again. 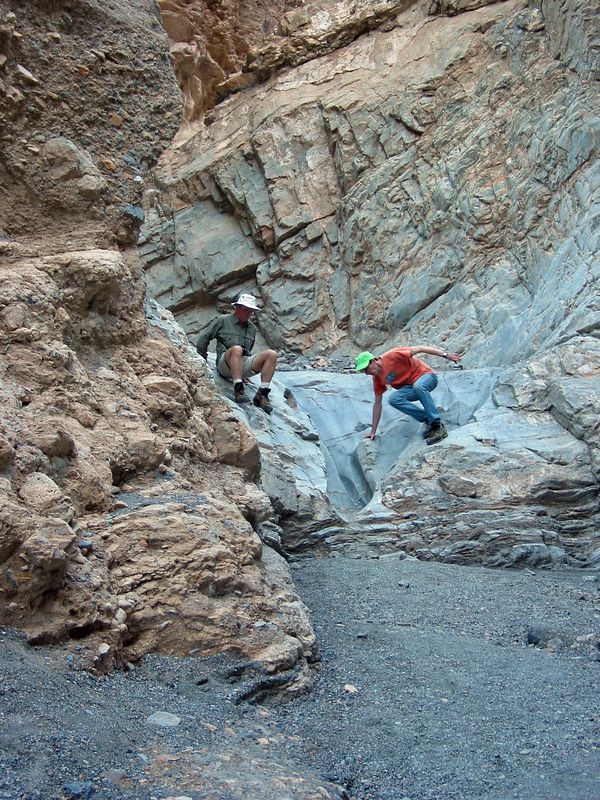 The gray rock is marble

We drive into Panamint valley as the sun is setting. PG locates a geocache where the road forks off towards Trona (the word is 'mail'). We continue past Panamint Springs, up to the ridge, and turn off onto a dirt road. It's over 4K', and there are Joshua trees at this altitude. The full moon comes up, huge and bright, over Telescope peak. 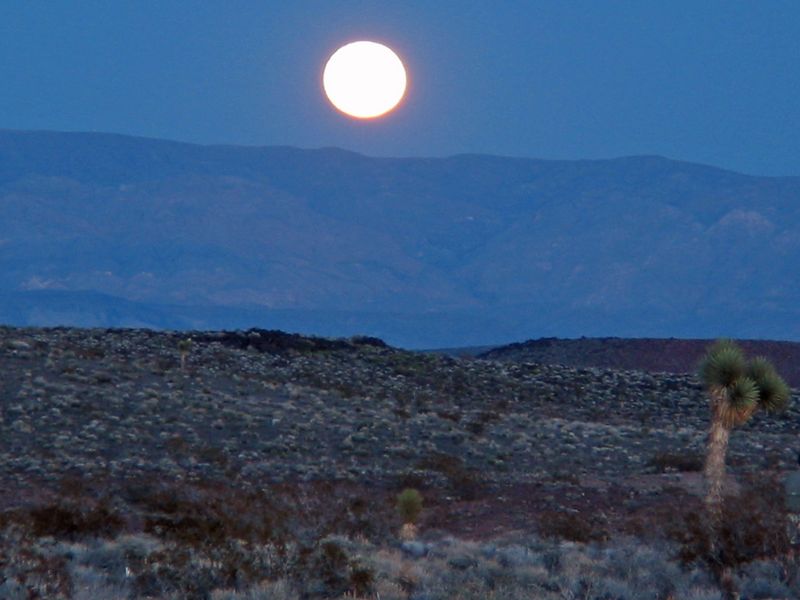 PG's GPS tells us about a side road to a prospecting site. It takes a careful look even to see it. We drive down it a couple of miles and pitch our tents at dusk on a high plateau, miles away from anyone or anything, with spectacular views. The weather is perfect and the air smells great.

PG makes a robust and hot fire with the free wood, and we boil water and have dinner. Soon the moon is fairly high and illuminates things to near-daytime levels. 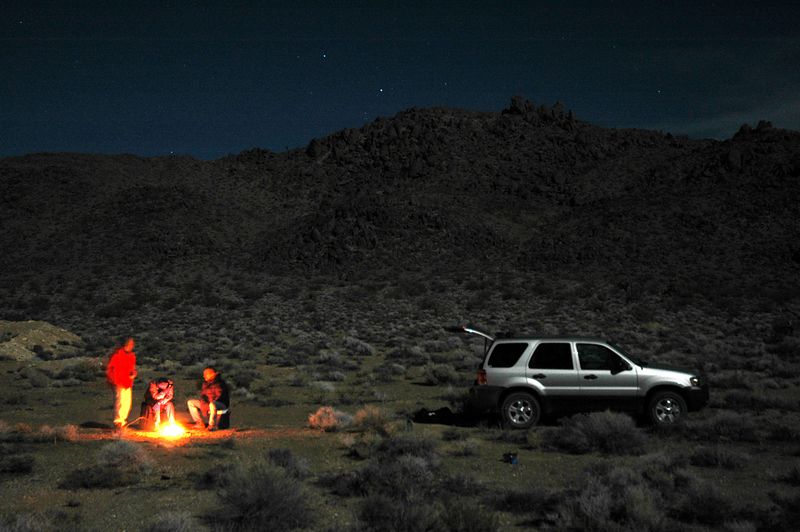 This photo taken by moonlight. Looks like an SUV ad.
PG pulls out a harmonica and plays some mighty lonesome music. We take a moonlight stroll up a nearby knoll. PG sets a blistering pace up the 500' hill, which is a perfect blend of boulders and sand. The rock, unexpectedly, is JT-like granite. At the top we find PG sitting on top of a 12' outcrop with sheer faces on all sides. We circle around the back and find a doable route. We sit on the flat top for about 15 minutes, watching the faint orange dot of our campfire embers far below, talking about guy stuff (not summarized here since women may be reading this) and generally living in the moment. 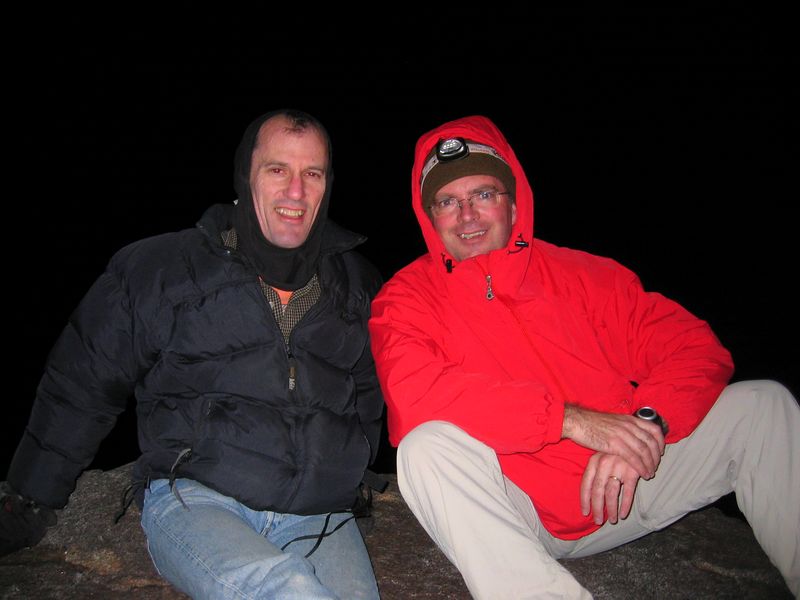 The outcrop we climbed is left of center 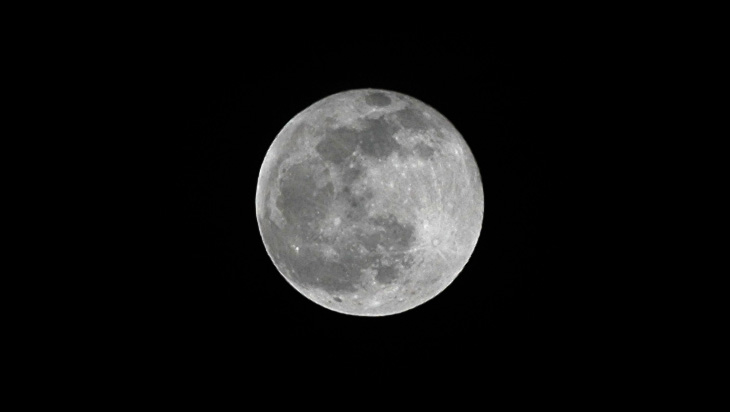 We descend and retire. I take an Ambien but still sleep poorly. I get up around 6; DG and PG have been up for a while, photographing the sunrise and moonset. 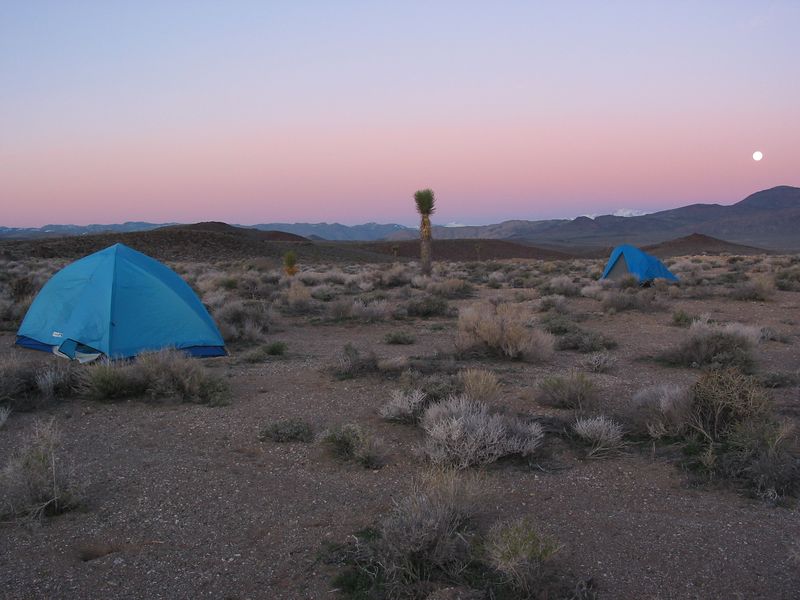 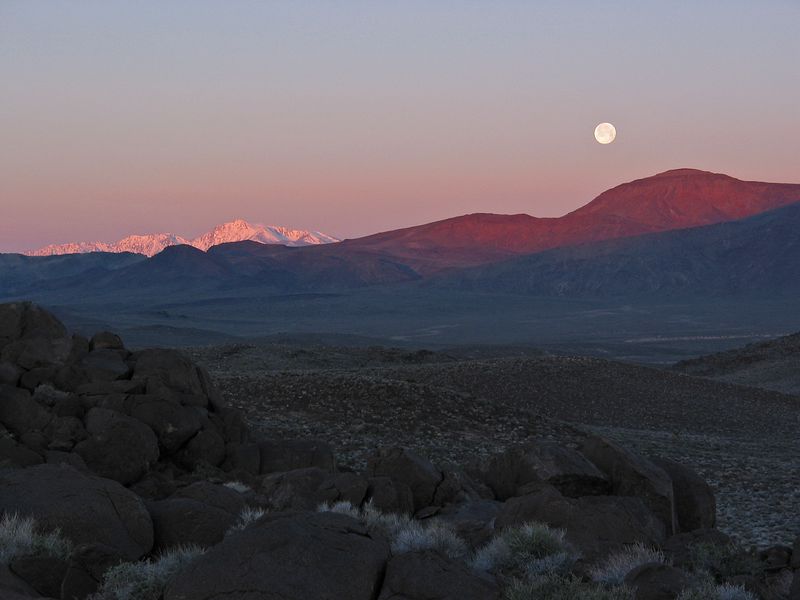 We have breakfast and drive down the road to a vista point where there are a couple of geocaches. DG and I wander down the hillside. Looking back up the hill, the color palette and the composition of rocks and flowers are beautiful beyond belief, and I get a spider-sense feeling of new-age energy flowing from the earth. Walking up the hill, I suddenly become aware of the individual rocks rearranging themselves under my feet, and I feel like the soles of my feet are interacting with the rocks, kind of like Babe and the sheep. 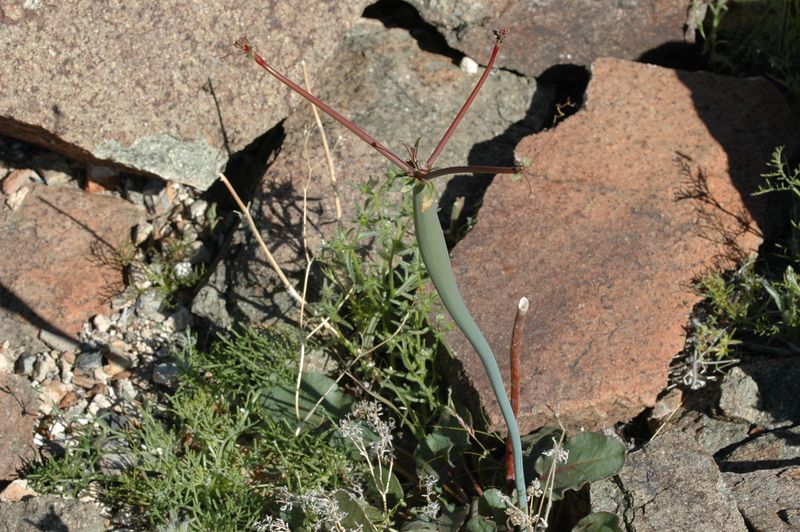 Odd tubular stalk
To one side is a Grand Canyon-like canyon, further support for my theory that Death Valley has one of everything. 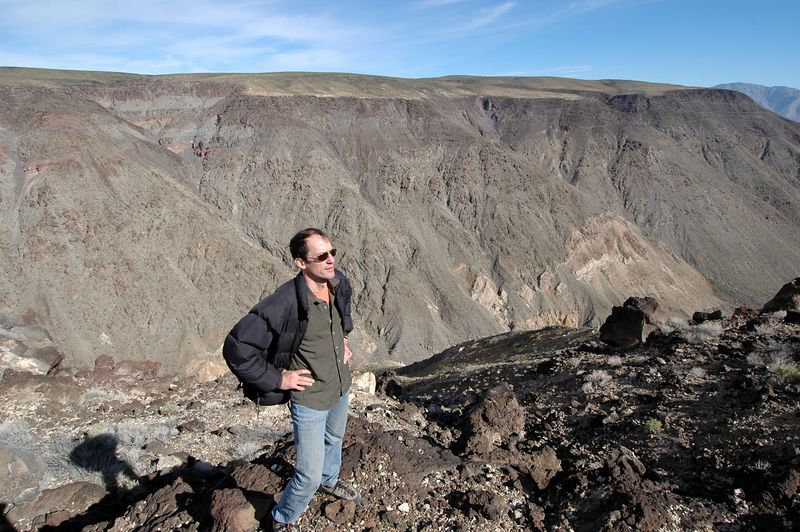 We get water at the Panamint Springs diner, then head back up the road to Darwin Mine, and take a short hike up an canyon that becomes progressively more lush, ending in a verdant waterfall grotto with trees and beds of watercress (which we sample). 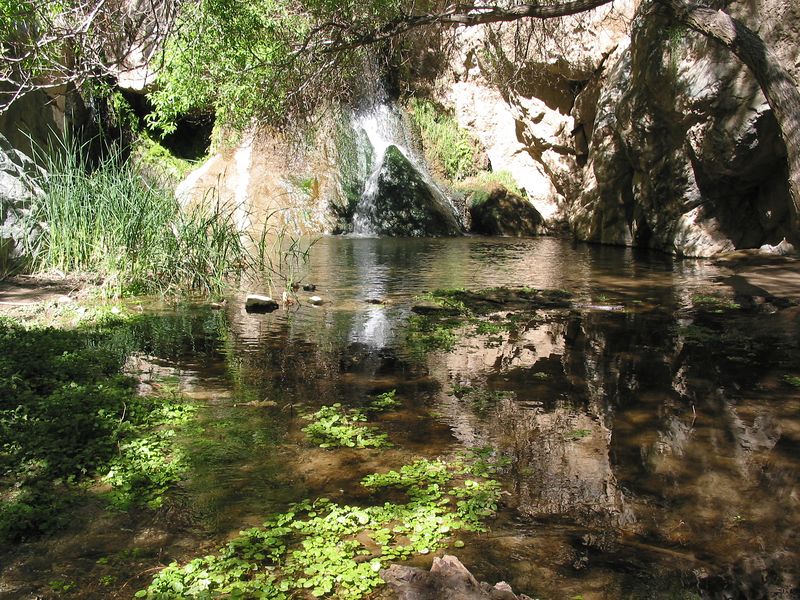 We converse with a birdwatching couple. A wedge-shaped rock teeters precariously, Wile E. Coyote-like, over the trail. I attempt to climb up to it. 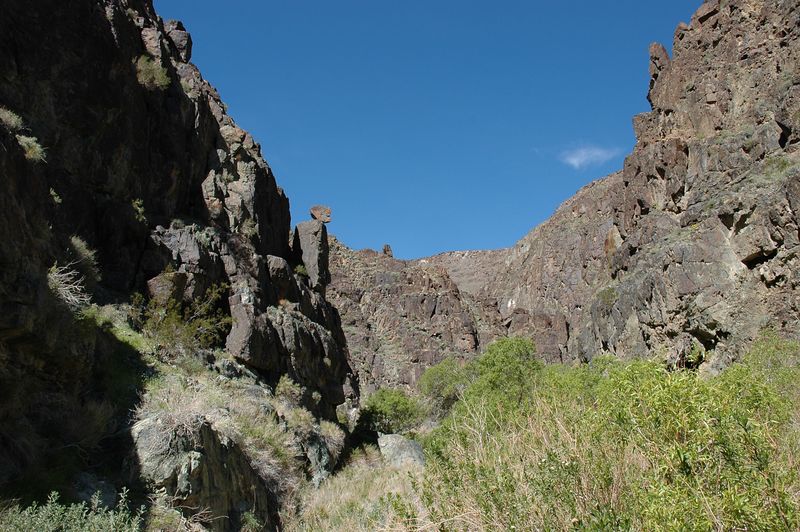 We continue down to Panamint Valley and take a dirt road that goes towards the 700' sand dunes at the head of the valley. We park and head towards a geocache that is a 1.6 mile walk across a dry lakebed. The plain is covered with black pitted rocks, some of which are putatively meteorites. Actually they all look like meteorites, and we bring back a few. The geocache is near a rusting car seat frame and rebar poles, which are referred to in the description as Theater Seating and His/Her Coat Racks. We look in vain for shell casings and unexploded ordinance. 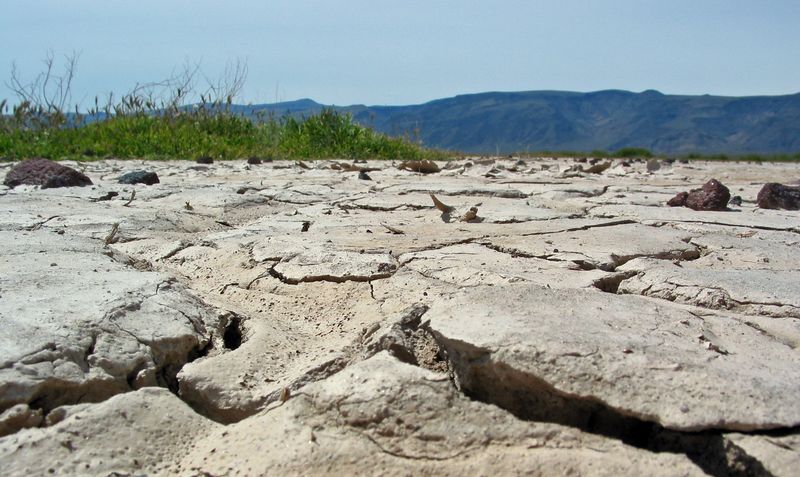 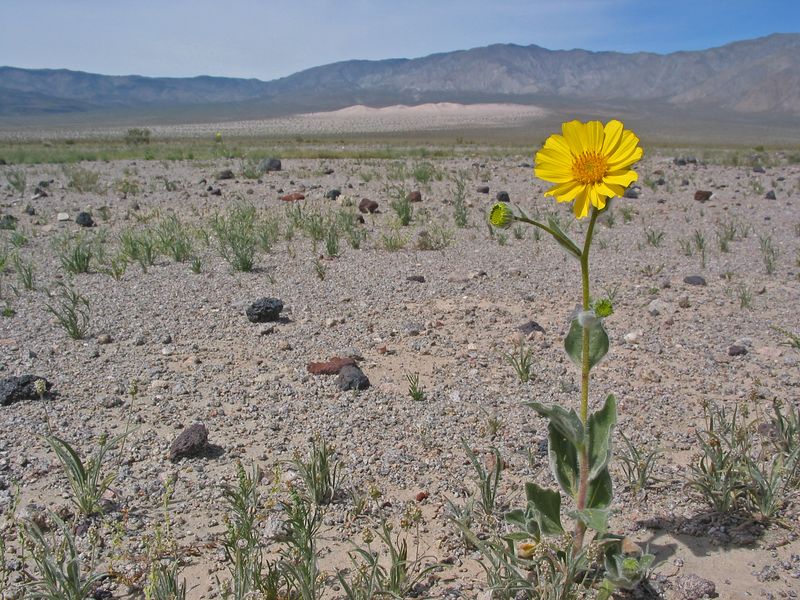 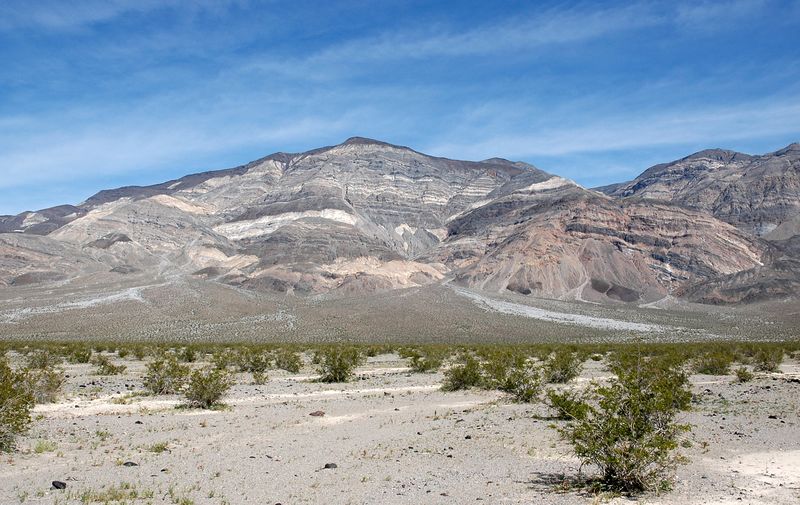 Back at Stovepipe Wells there are even more tourists, a Corvette convention, and a queue of a hundred vehicles waiting for gas.

We decide to head back by way of Beatty. We pass a group of nice-looking medium peaks that appeal to DG, so we pull over, pick a route, and head on up. The climbing is steep and satisfying. The flowers sprinkling the hillside are the most beautiful yet. We pick up a little trail on the ridge that leads us to the middle summit, about 800' above the car, with a great view in all directions. 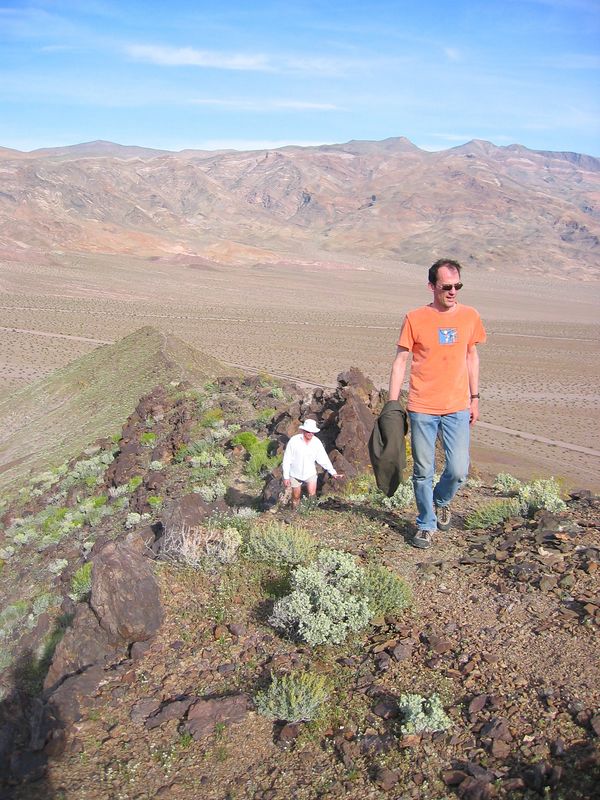 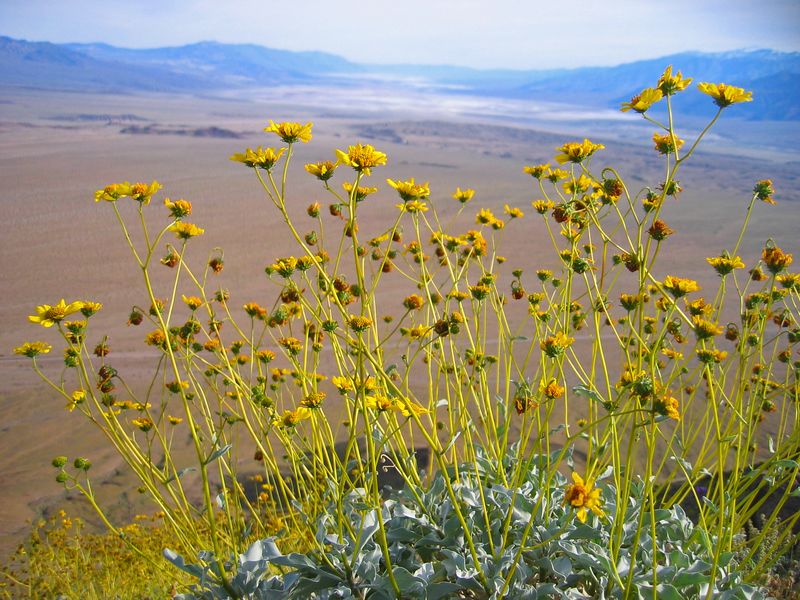 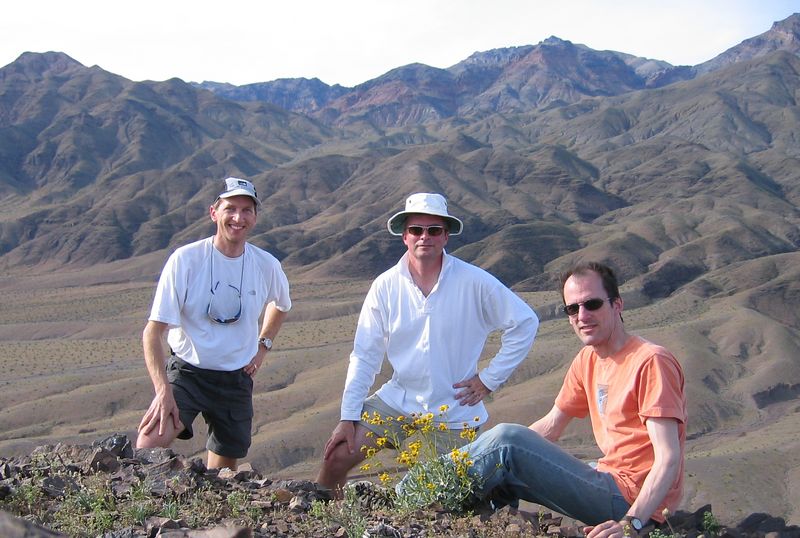 Panorama taken by PG and DG

We exit the park and pass through Beatty, which is dying a slow economic death. A billboard spews venom towards Bank of America, which apparently closed the local branch. A huge illuminated arch proclaims 'Free Parking' over a dusty vacant lot.

Down the road a few miles we see immense sand dunes in the distance. With the help of PG's GPS we navigate towards them. Clouds of dust and sand swirl around the base of the dunes. We expect the usual Mad Max-like post-apocalyptic scenario, but as we get closer we see scores of RVs - the place has been taken over by ATV enthusiasts. A group of buzzing ATVs crosses in front of us. As we approach the RVs the ground becomes sandy and slippery. DG asks some tough-looking men for directions, and we head for the dunes. Driving, I get very tense worrying about bogging down in the sand, and DG takes over. There are ATVs everywhere, scuttling over the steep dunes, spewing exhaust, kicking up dust, and making a God-awful racket. The whole thing is a nightmarish, Boschian vision of Hell. 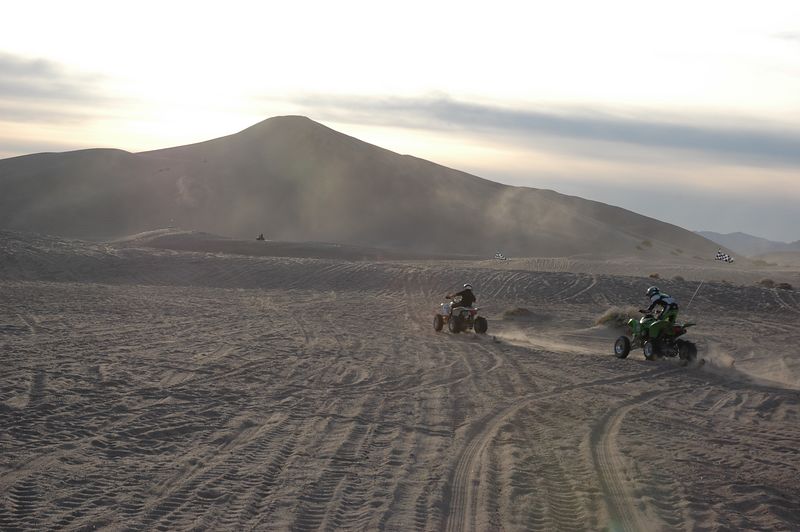 We beat a hasty retreat. Even with the GPS it's hard to find the dirt road, and DG ends up driving a ways cross-country (doing our bit to destroy the fragile ecosystem).

Back on the road to Las Vegas, we play a few rounds of Botticelli-based games (PG still has a Bratislava starting with F outstanding).

We decide to avoid the buffets (even Alladin, the killer whale in the sea of casino buffets) and instead ask the GPS for Thai. It takes us to Thai Spice, which is a slow but good.

Summary: one of the greatest trips ever!! Very tough to return to civilization after this.

Finally, a couple of images to use as your desktop: 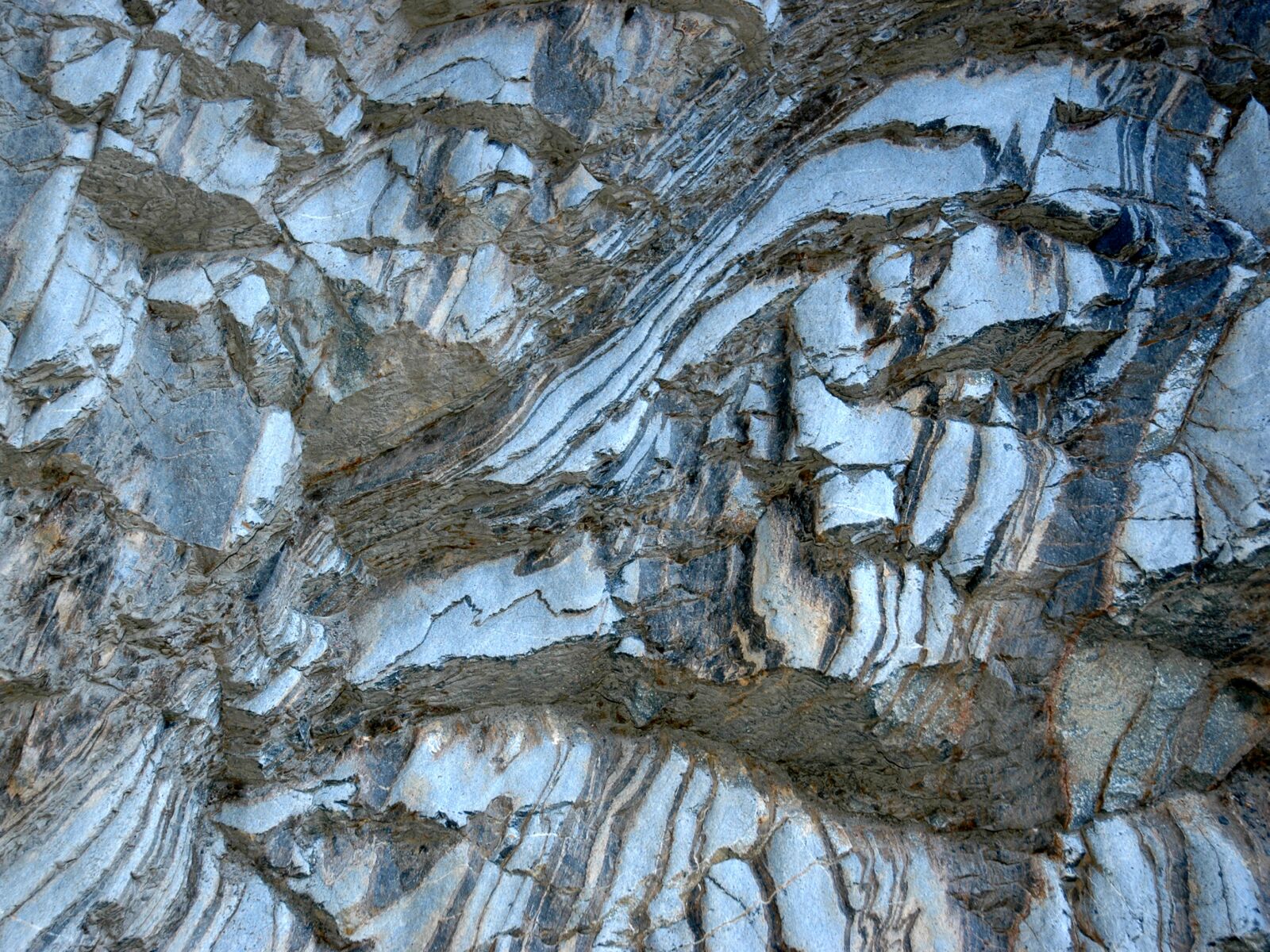 Near the top of Mosaic Canyon 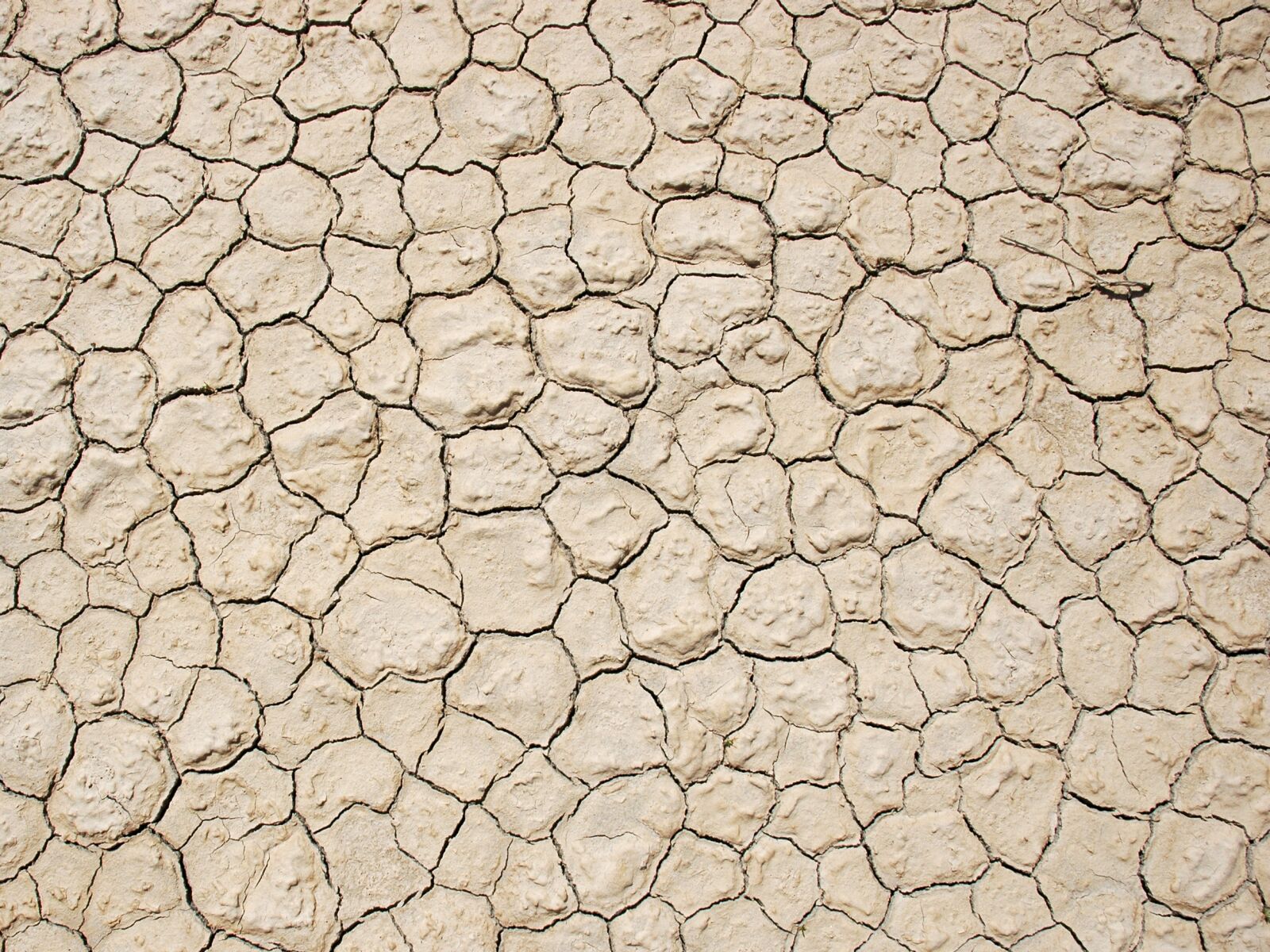