I was invited to give a talk at EurOpen 2000, a UNIX-oriented software conference, on February 11 in Malmo Sweden. Ron Kuivila and his wife Bobbi Tsumagari are in Berlin for the year (Ron has a prestigious DAD grant from the German government) so I accepted the EurOpen invitation, with the goal of mixing in a visit with Ron.

We flew via Amsterdam to Malmo. Killing time in Amsterdam's Schiphol airport, we drank champagne and endured the ramblings of a globe-trotting Scot ('Angus'). The once-wonderful airport has been made into a huge crass shopping mall (motto: 'See/Buy/Fly'). I couldn't buy aspirin because I didn't have my flight number.

We landed in Malmo about 4 PM and took a 45-min bus ride to the center of town. We checked into the conference hotel (Scandic Triangeln), dropped our bags, and explored town, which had many cobblestone-paved pedestrian streets and squares, and some historic buildings. 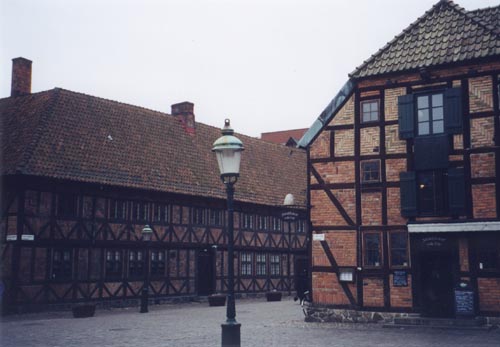 We had dinner at the Swedish equivalent of Sizzler. It was right around freezing, with intermittent drizzle, most of the time we were there. But I'm not complaining!

Swedish has enough in common with German that we were able to decipher a bit. 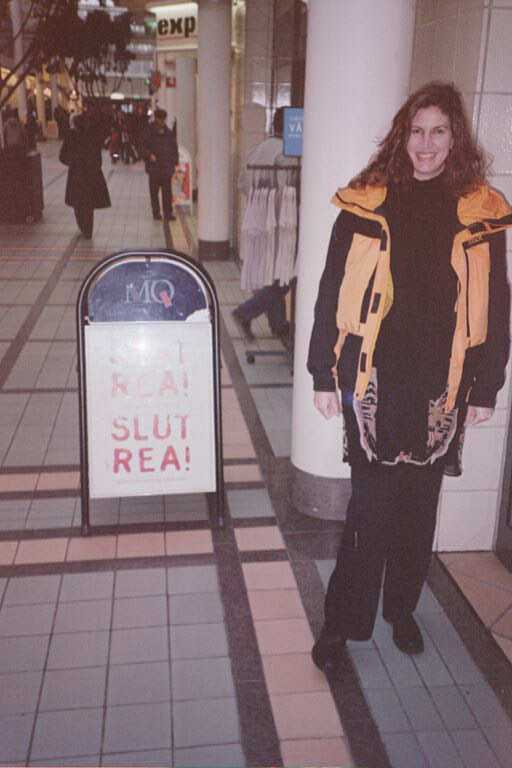 We quickly learned 'Skink', meaning 'ham', which became the trip's all-purpose word (every good trip has one).

We did some yoga (plus my new groin-intensive rock-climbing stretches, details on request) and watched TV: dubbed American shows, a Swedish version of Jeopardy, and a Candid Camera-like show called 'Just Kidding' in which people are subjected to various indignities like being squirted, having boxes dropped on them etc. An amusing one: at a zoo's bear exhibit, a man in a bear suit would sneak up behind the crowd and grab someone. It wouldn't fly in litigious America.

I attended the morning session of the conference (security-related talks, appropriate since the big Yahoo/Amazon hacks were going on). Lynne explored the town and its all-purpose museum which had marmosets and other odd exhibits. I met Anita Rojning, the conference organizer, and we took a cab to a radio studio for a short interview. Stephen Mann, the other keynote speaker, went too. He wore a pair of laser/video glasses and had a bunch of little computers strapped to his body, all of which supposedly give him a mediated view of reality and put this visual field on the Web.

That evening we walked to the harbor, caught a high-speed ferry (~1 hour) to Copenhagen, and walked around there for an hour or so. It was reminiscent of Amsterdam, including an 'Erotik Museum'. It was very windy and cold, and we enjoyed a hot dinner in a cozy Italian restaurant.

We got up early and went for another long walk, visiting the main Cathedral (the ceiling of one side chapel was covered with medieval art - the rest had been whitewashed during the Reformation) and the 'Carriage and bicycle museum', low-key but entertaining.

I returned to the hotel and worked on my talk for a while. Unfortunately I followed the very entertaining Stephen Mann, and suffered from jet-lack tiredness. But the talk went OK, and I chatted with people after.

That evening we bought sandwich materials and saw a British comedy duo at a 'picnic theatre'. The Monty Python-inspired pair did skits involving escape artistry, Swedish children's books in translation, an iceberg-centric rock-opera version of 'Titanic', and other tomfoolery. The Swedish audience loved it and demanded two encores.

I ran into Kirk McKusick and Eric Allman at breakfast and we chatted a bit. They were flying out of Copenhagen. Lynne and I cabbed to airport, flew to Amsterdam, then Berlin Tegel. There was some difficulty finding the rental car counter - it's hidden in a distant corner of the airport - but the car was ideal: a large Ford station wagon, for about $25/day. They gave us a map showing countries to beware of (Czech Republic) and to avoid completely (Poland).

It was amazingly easy navigating to Ron/Bobbi's apt. on Storkwinkel, just off Kurfursterdam near its western end. Their place is huge and very nice. We unpacked, lolled about, then took a cab to symphony hall and heard a touring Rumanian orchestra. They played some forgetable stuff, and Ravel's Bolero, for which the snare-drum player got several ovations. We had dinner after at oldest place in Potsdammerplatz: spaetzle mit schinken (skink) and cheese. Home by underground.

We did a car tour of Berlin: a showcase of 60's apartment-building architecture near Tiegarden, the old East German TV tower, and out to Sans Souci ('without sorrow') castle in Potsdam. Lynne and Bobbi toured the castle while Ron and I searched vainly for food. We dropped Bobbi off at home, and returned to 'museum island' to see a Greek antiquities museum (NOT the Pergamon) and wander among flea-market stalls.

We returned home, where Bobbi has cooked a gourmet meal including quail baked in pear, and crepes Suzette. After a short rest we headed off to 'Transmediale', a club-like event in the 'Creativity Center', a converted eastern-bloc apartment building near the TV tower. Techno music and projected video. The most interesting part: hand-painted signs with a German romantic theme on staircase landings.

We set out at the crack of noon for Prague. After an hour on surface streets we made it to the Autobahn, and got to Dresden around 3. We walked around, had some schweinfleisch/cabbage/dumplings, saw the bombed-out cathedral rebuilding project, with giant shelves of cataloged stones. 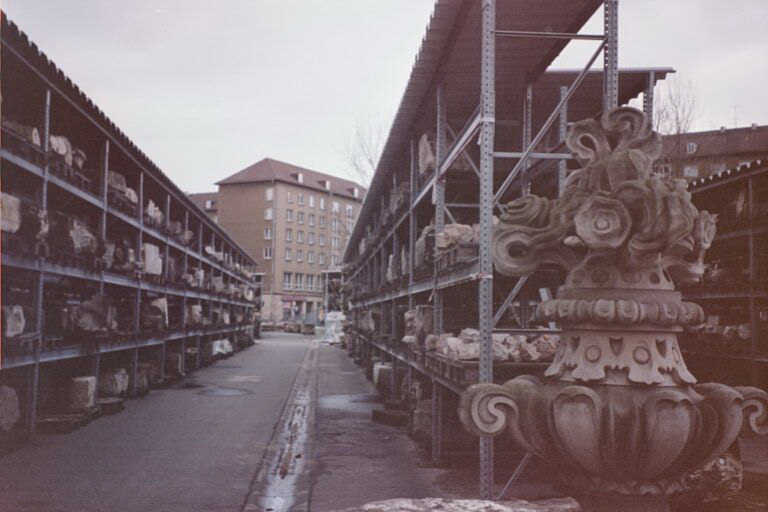 The countryside south of Dresden was extremely pretty and Bruegel-esque. The 2-lane road went across snowy fields and up into a mountain range, with the Czech border at the top. On the Czech side there were numerous brothels and a line of trucks about 2 miles long waiting to cross into Germany (or to patronize the brothels, hard to tell). We pulled into Prague around 7, went to the info booth at the train station, and got an OK but pricey ($50) hotel on Victor Hugo street in the old town. We wandered across the old bridge, and had a nice dinner at a Czech place. I was feeling tense from all the driving and an impending cold. 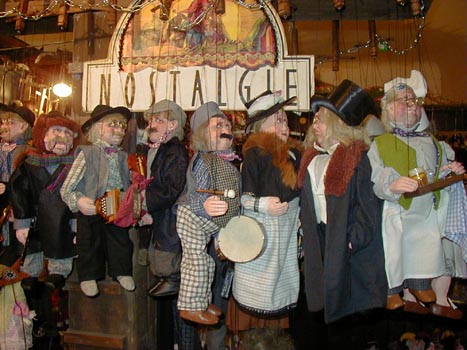 lunch in a subterranean cafe, many old streets/squares/churches, 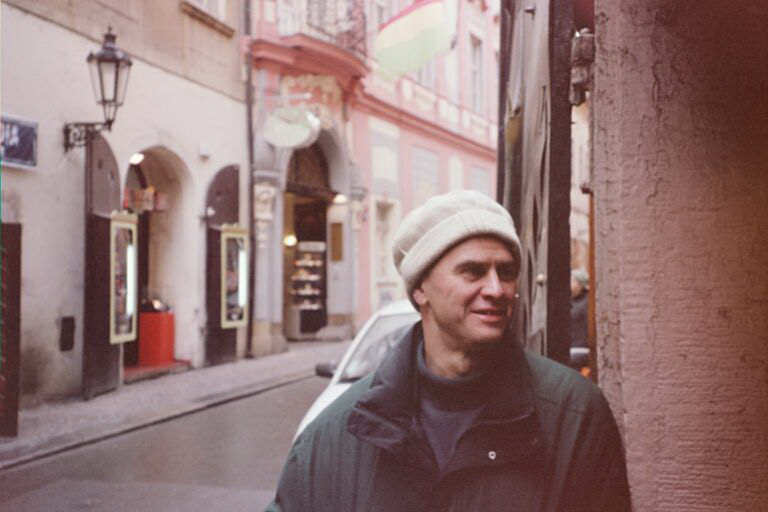 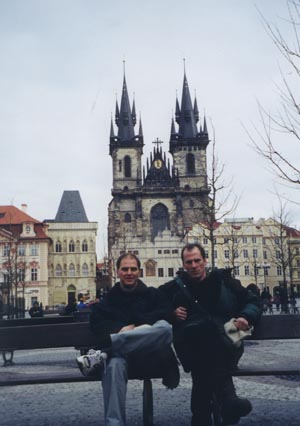 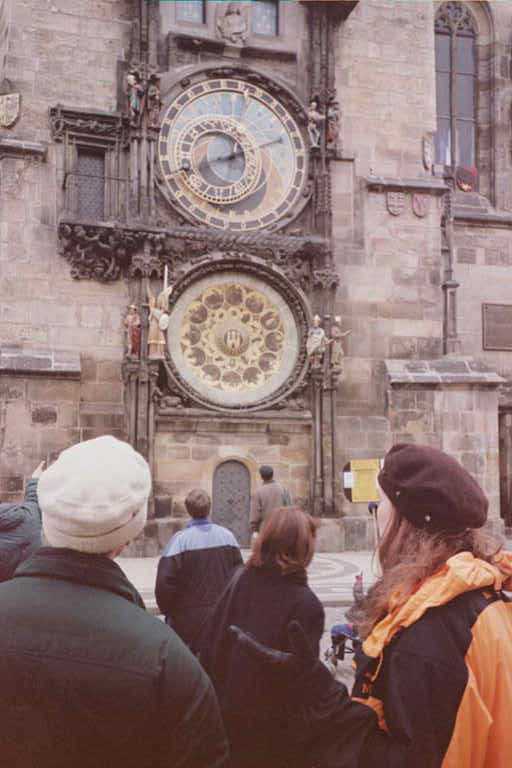 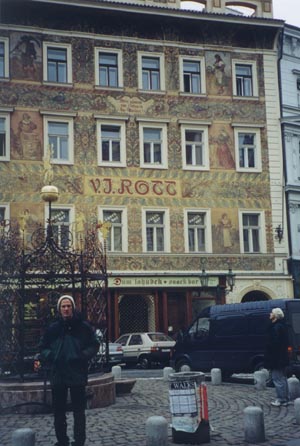 and finally across the river and up the hill to the castle, which its giant cathedral (closed, unfortunately). 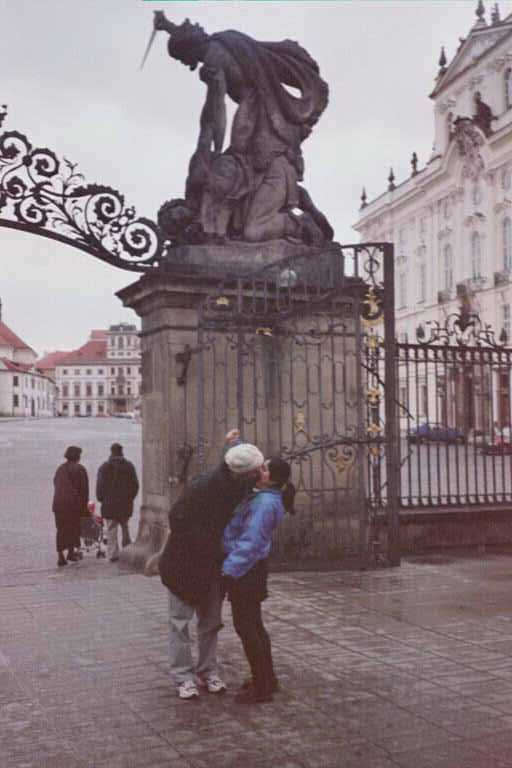 Note the rather dramatic statue. 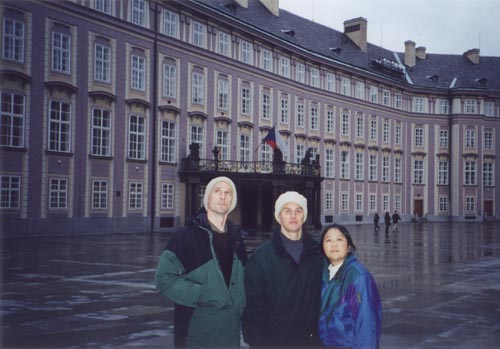 In the late afternoon we headed for an Internet cafe to read email; Bobbi in particular sought news of her ailing father (lots of concern, but eventual good news). We split up - Lynne and I saw a violin/piano concert at the elusive Simon and Judah church. We reconvened later for another Czech dinner (pork layered in potato pancakes, deep-fried potato spheres, cabbage in various guises, etc.).

We met in the breakfast room at 7:30, packed up, managed to navigate out of town, and headed north on E65 for the Krkonose mountains and the Spindleruv Mlyn ski area. We took the wrong turnoff in Turnov and did a 10-mile detour. Eventually we got onto highway 14 heading up into the mountains (and past some dinosaur communist-era factories). It was raining hard at 12:30 when we reached the ski area, which has about 100 hotels clustered around the base. We managed to get the car onto a narrow icy road and it took some expert driving by Ron (a 50-point turn with X-country skiers streaming past, like a video game) to extricate us.

We waited for the Info office to open at 1, found a hotel, rented skis, checked in, and managed to be on the slopes at 2:30. The rain had lessened and turned to wet snow, so conditions were OK. We managed to get in 3 or 4 runs; the routes were boring but it felt good to get some exercise. Ron and Bobbi were the fastest and best skiers, respectively, on the mountain (not a lot of competition). Lynne had boot-size problems and sat out.

Back at the hotel, I committed the faux pas of walking into the sauna/spa area. There was a naked couple there. Turns out you have to reserve it. We had another giant greasy dinner - with a half-liter of Pilsener Urquell, which cut the grease nicely - and retired early.

We got up early, headed to the lifts and got half-day passes ($10). The line for the quad was 30 min+ (there was a school holiday, lots of kids). Lynne got new boots - Dolomite - and had a great day.

We got in 5 runs, returned the skis at noon, had lunch at some kind of bar/disco/strip club (extra-roomy booths presumably for lap dances) and hit the road.

The drive, over the mountain crest and down into Poland, was charming and bucolically scenic. Poland is very old-looking and slightly second-world; horse-drawn carts are still in use. 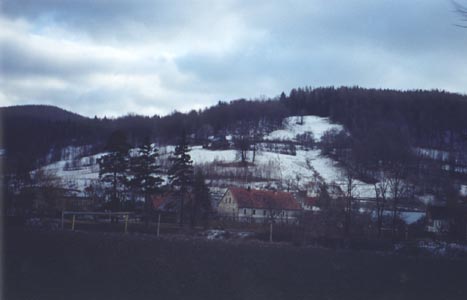 Without adequate maps, we made the usual navigation error, taking us on a more southerly route than planned, but it worked out OK. Soon we were back on the Autobahn. This time we took the Ringbahn, a lengthy circumnavigation of the city streets, and pulled in around 8. We had a wonderful dinner at 'Hitite', a Turkish restaurant with Egyptian decor (including extremely austere chairs). Back home, we said our goodbyes to Ron and Bobbi.

Lynne and I arose quite early, gassed up the car, and headed for Tegel. There was some excitement in Amsterdam - we got in at 11:00, and I mistook our flight's boarding time (11:05) for its departure time (11:45) so we did some sprinting through the airport. Also Lynne left her boarding pass at passport control, and there was some panic before it was returned to her at the gate.

Finally, the 11-hours flight from Amsterdam to SFO was marred by an intermittent chorus of squalling babies, and by a Dutch man behind us who resembled the Katzenjammer Kids father, and who bellowed inanities and irritating laughter nonstop. But we arrived OK.