On Thursday night Lynne and I packed climbing shoes and harnesses, flew to Ontario (CA), rented a car, and drove to Joshua Tree National Park for a couple of days of climbing and general fun.

The car was equipped with a GPS navigation system; we initially derided it but it turned out to be quite useful. For example, in Palm Springs we asked it for a grocery store, and it led us, in a calm 'generic female' voice, through several miles of blank suburbs to an Albertson's. It has a detailed road map built in, and it knows your position within a hundred feet or so.

We stopped at a Baker's Square in Palm Springs for dinner, probably the worst meal for which I've ever paid money. Then we drove up highway 62 to the town of Joshua Tree, and the High Desert Motel ($60, OK but rock-hard beds). Next morning we ate at the Country Kitchen, which was packed with other climbers and a wacky guy who wanted to rebuild civilization using the inherently stable triangle.

Joshua tree is a rock-climbing Mecca. There are some large rocks there, left behind when sediment eroded away around once-subterranean granite formations. 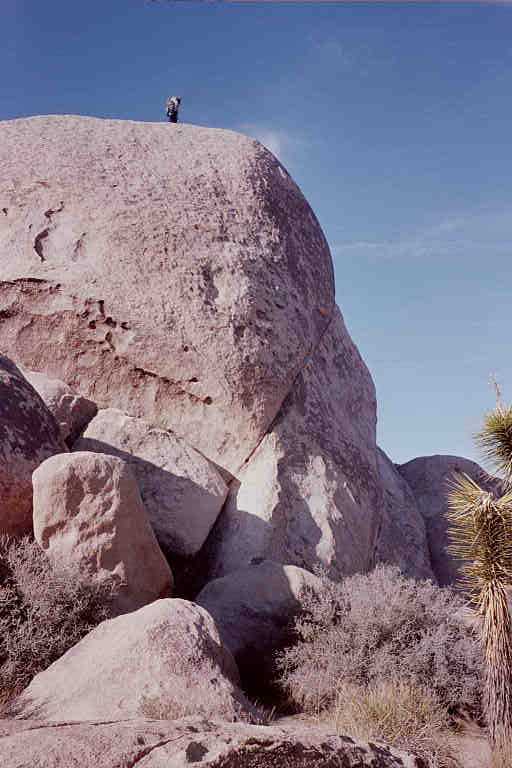 
We had arranged to hire a guide from the Joshua Tree Rock Climbing School, meeting him at Turtle Rock at 8:30. Unfortunately, the ranger-issued map didn't show this feature; we drove around randomly, asking various people, and finally found it at 9:00. Our guide, Pat Dennis, was waiting in his VW van. We walked around to a steep face, Pat free-climbed up 50 feet or so, set up an anchor using some existing bolts in the rock, and lowered a rope to us. We then alternately climbed and belayed.

The first route (humorously dubbed The Black Corner of Death; in fact it was an easy 5.2) was a good intro to climbing on granite. The surface is rough crystals, providing great friction but hard on the fingertips (no blood, but lots of tiny cuts). The features of the rock (cracks, flakes, ledges) offer hand- and footholds, but unlike at the gym you have to seek them out and do a bit of route-finding.

We did a couple of different routes at each rope placement, one easy and one harder. With a break for lunch, we climbed until almost 5:00 PM, and did 9 total routes - a lot, according to Pat. 4 on Turtle Rock, 5 on Cap Rock (I think). None of the routes was close to vertical. They exercised feet rather than arms. 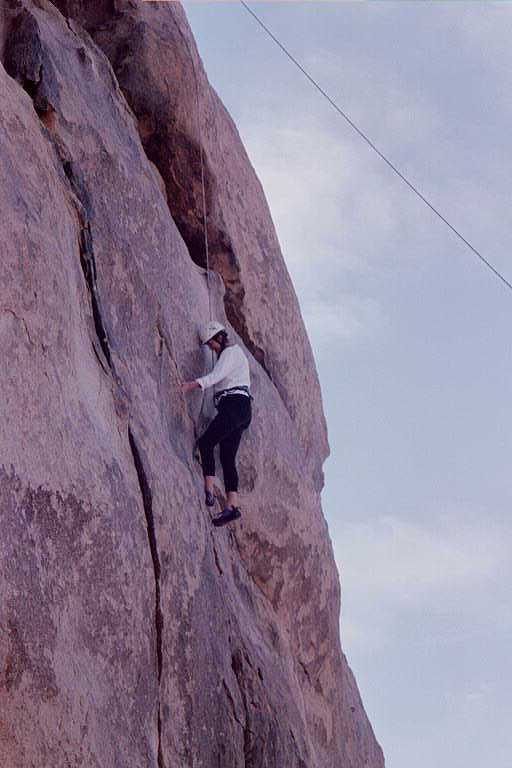 Lynne 'on climb'. It wasn't quite as vertical as this picture would suggest 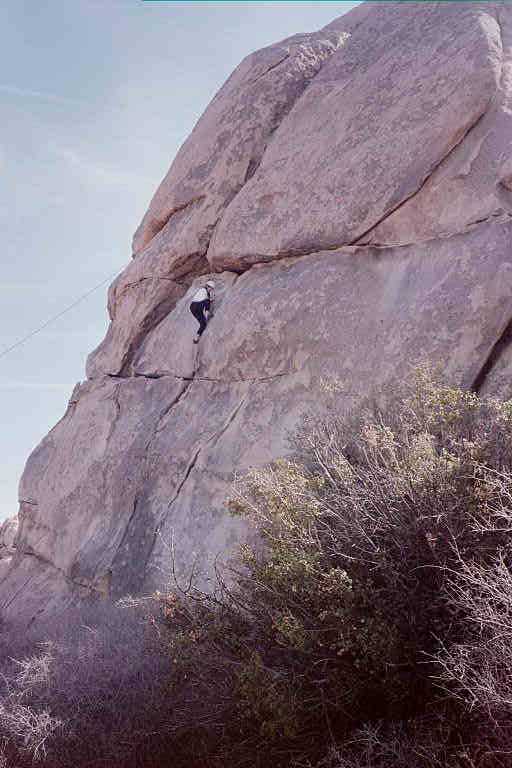 A more accurate perspective. Slab at top (see below).

In the second rope placement, the last 20' was a smooth slab pitched at about 50 or 60 degrees (I guess; hard to judge). It was just shallow enough to 'smear' up, with some care given to foot placement; handholds consisted of 1/8" ledges, actually more fingernail-holds than handholds. This was a bit scary for me, but I was comfortable with it after a while.

Lynne, very impressively, was able to do all of the routes. She had a problem with 'paralysis' - lack of confidence in the upcoming move, and inability to pull the trigger on it. Pat, who was an excellent guide in all respects, did quite a bit of coaching and encouragement, and once or twice scrambled up the rock to where she was. Lynne developed a Monica Seles-like vocal technique for getting over the hard parts, which had me doubled over with laughter for long periods.

Most of the routes were below 5.9, so they were pretty easy for me. On the next-to-last climb Pat had me try a 5.10C bit, a smooth slightly-overhanging bulge with no handholds to speak of. I spent about 5 minutes working on it, tried 4 times but couldn't quite get over, in spite of an all-out rope 'lift' from Pat and Lynne. Something for next time! The last route was a 5.9 with a non-obvious move halfway up, which I failed to discover but was able to do after Pat pointed it out (Lynne also did it, with a bit of rope help).

Pat is a 40-ish 'climbing bum' who has spent his youth in Yosemite Valley, Joshua Tree, and other climbing Meccas. A very interesting and amiable guy. He's currently studying for a Masters in Philosophy at San Diego State. We discusses Hegel while Lynne was climbing, and Lynne and I vainly tried to recall the words to the Monty Python Philosopher's Drinking Song.

As the sun was sinking we reluctantly called it a day, bade farewell to Pat, drove back to town, surveyed the dining options and ended up eating Mexican food at Arturo's (C+).

The next day (Saturday) we headed back into the park and climbed Ryan Mountain, 2 hour round-trip with a nice 360-degree view at the top. 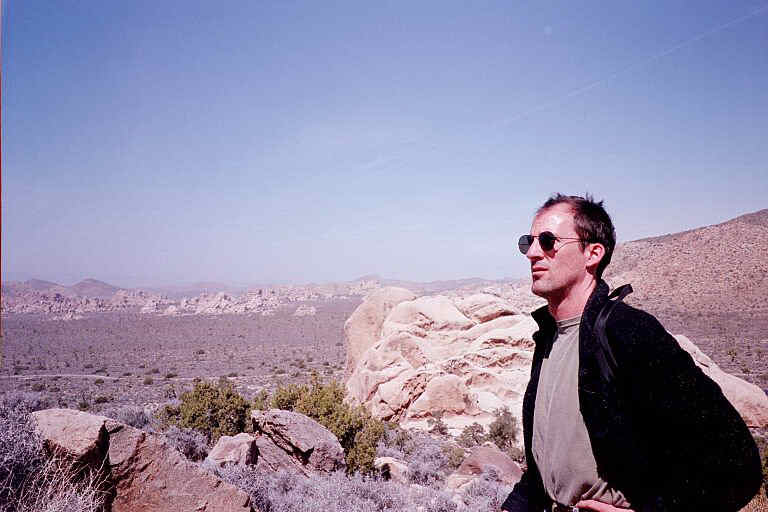 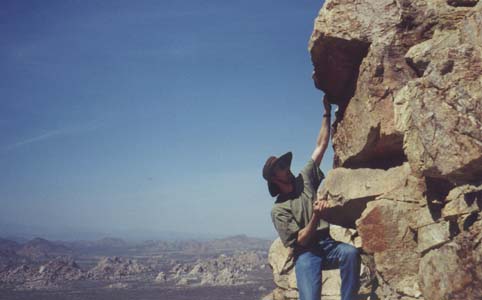 Then we drove down to Hidden Valley, parked, and walked up into the first boulder pile we found. This was a wild 50-foot-high complex; we tried various routes and made it most of the way up, emphasizing safety (climbing down is the hard part). 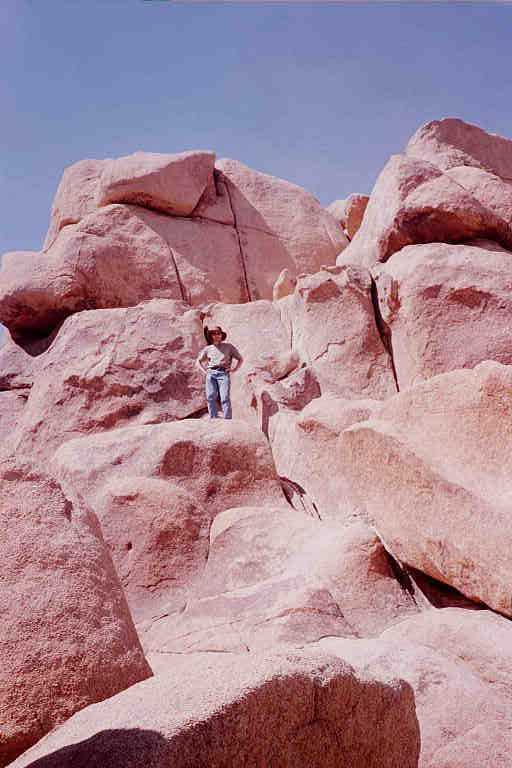 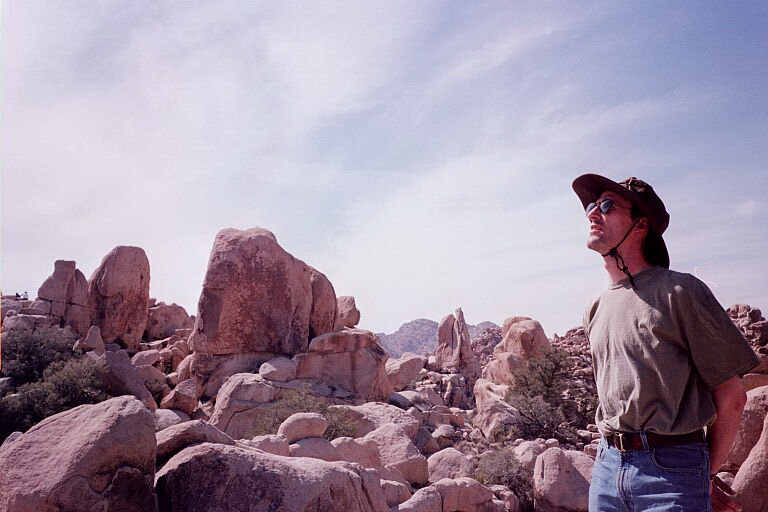 Hard to see, but climbers are on the spire to my left.

Then we crossed the road back to Turtle Rock and tried to find an easy route up. The first 10 feet was a 45-degree slab with minor features. I tried this a few times, but it was clear that the descent would be a bit dicey (and a slip would result in a bad fall) so we played it safe and found some lower boulders to work on. One of these resulted in an awkward situation for Lynne that I'm not at liberty to discuss. 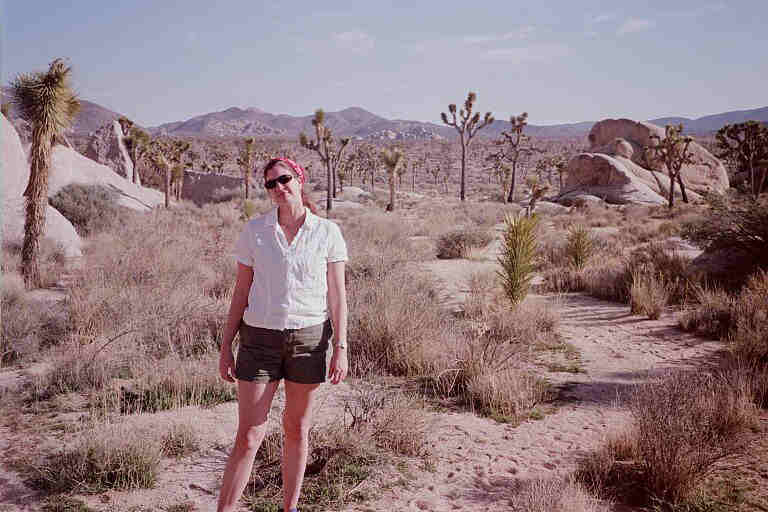 The awkward situation occurred atop the boulder at the right.


Our final climb of the day was a 70-foot slab, steep enough to produce some major butterflies, with a wonderful view from the top. 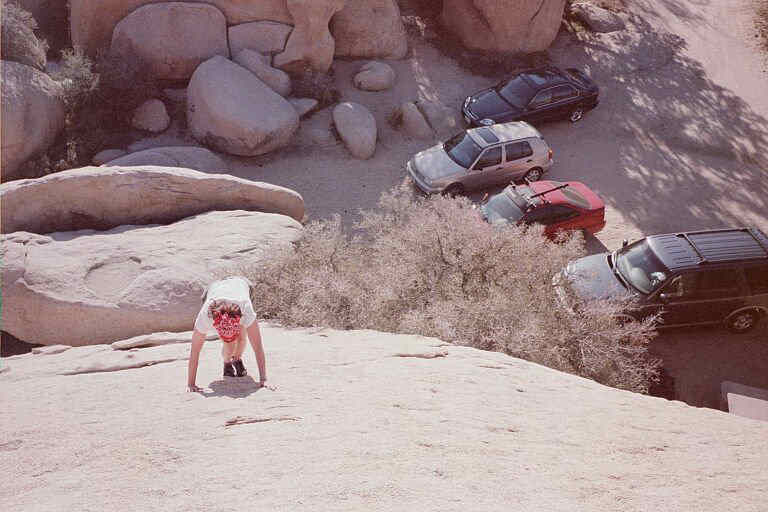 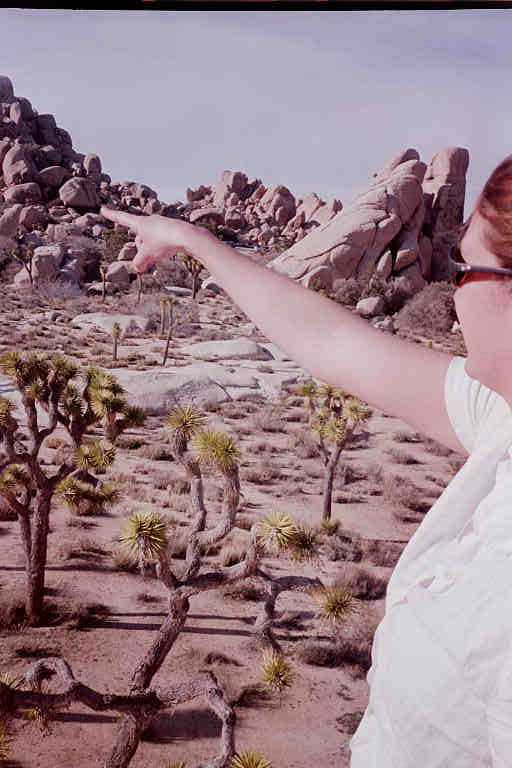 A fantastic trip - the weather was sunny and mild (70's) both days. The Joshua trees (so named by Mormons in reference to a Biblical story in which Joshua has to keeps his arms raised for a long period; the trees have awkward, angular branches) were bizarre and beautiful. We want to return, hopefully before it reaches the unpleasant heat of summer (100-110) in a month or two.

More pictures from the trip