BONUS: some photos taken by Bo and Urs

Mike, Lynne, Urs, Bo and I have been planning for months to climb Mt. Shasta on Labor Day. But the route is downgraded to 'poor' (lack of snow) and then the weather forecast looks bad. So we decide to head for Tuolomne Meadows instead. Mike elects to stay home.

Lynne and I pick up Urs and Bo at 3 PM Friday. The traffic is terrible - it takes two hours to reach Livermore. We stop in Oakdale at a drive-in. Urs, inquiring about their 'Ortega Burger', is told simply that 'It's an Ortega Burger - it's not a regular hamburger'. As we reach the mountains it starts to rain. Urs, fearing a weather disaster, repeats the mantra 'I am afraid' over and over, sounding a bit like a Swiss Arnold Schwarzenegger. Later his chant becomes 'I am SO stupid' when he realizes that he has forgotten his and Bo's sleeping bags.

We pull into our favorite Mono Lake campsite at 10:30 PM. It's cool (45 deg) and very windy but the sky is clear, the stars are spectacular, and the sagebrush is wonderfully fragrant. We build a large sagebrush-wood fire and make S'mores.

Preparing for the hike. I'm in new comfy folding camp chair.
I've brought an extra sleeping bag. Urs and Bo use it over their sleeping pads, and are fine.

The wind causes our tent to flap a lot. I take a pill, put in earplugs, and sleep well. Lynne gets up twice to douse fire; one spark could start a 5,000-acre fire and blow up the car.

Next morning: storm clouds still hover over the Sierras, and there's a dusting of snow on the high mountains.

The ground is littered with porcelain shards. Archeologist Urs reassembles some of them, and theorizes that they were used as skeet targets. 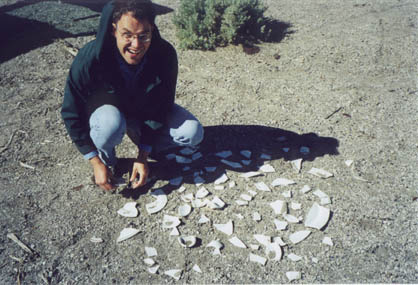 We set out on foot towards the volcanic hills east of the campsite.

The hills are a mixture of volcanic ash, obsidian, and other rock, with a sprinkling of bizarre and beautiful desert plants.

We search unsuccessfully for arrowheads. We ascend the right hill. It's calm and warm on top, and we rest and nap for a half hour.

There's a great view of Mono Lake from the top. 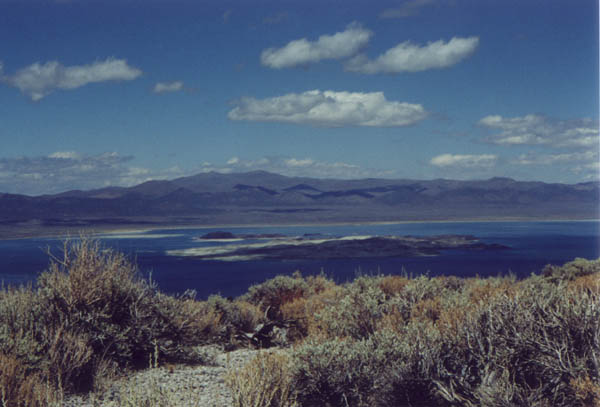 Cloud shadows on Mono Lake.
We cross a saddle and climb a second peak. We forcibly dissuade Urs from visiting an immense cinder slope about a half-mile away.

We descend the smaller but still impressive cinder slope beneath the saddle. 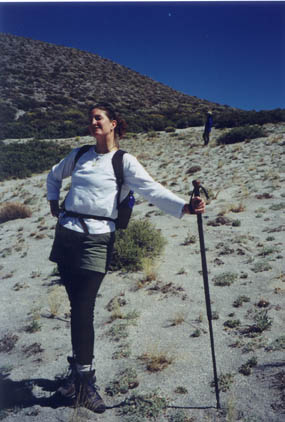 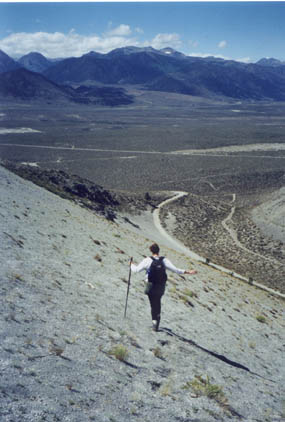 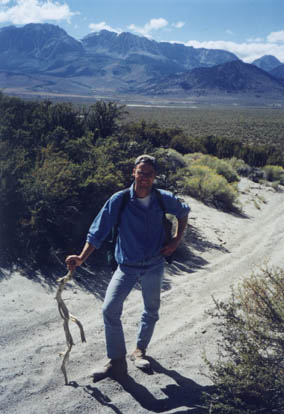 At 4:30, after a short rest at camp, we climb into the car and, following Mike O'Brien's directions, drive to a natural hot spring near Bridgeport. We stop at Mono Cone in Lee Vining (excellent soft-serve ice cream and clean rest rooms).

View from North side of Mono Lake; farm in foreground. Cinder cones visible in background.

(the directions: go north on 395. Pass a ranger station just before Bridgeport, and take the next right, passing a small quarry pit and following a dirt road about a mile uphill).

We soak nekkid with the tattooed locals. Lynne and I (after dressing) climb a 15' wall of the sharp and grippy mineral-deposit rock. Two crew-cut teenagers arrive with Bud Lights, presumably to ogle.

We return to camp, light another fire, and cook sausages over charcoal. Urs drinks an entire bottle of Cabernet, performs a series of operatic highlights, and proposes a new outdoor sport: fire-leaping.

Fire-leaping. The fire is bigger and hotter than it appears.

This could lead to our own version of 'Burning Man'.

Next morning, playing the role of Evil Drill Sargeant, I roust the troops at 7:30, and we're on the road at 9. After a leisurely stop at the Lee Vining gas station, we reach the Mono Pass trailhead (9,700') at 10:00. We walk on the trail for about 2 miles, then cross a marsh and head for the mountain.

On the east flank of the mountain is a large rocky knoll. We head to its left side. 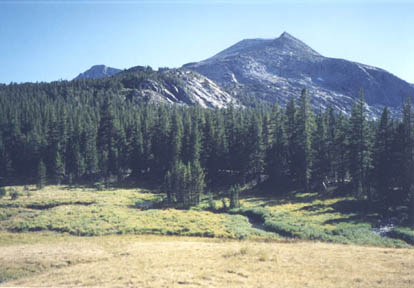 Marsh, rocky knoll, and summit.
An easy natural trail leads up the knoll. 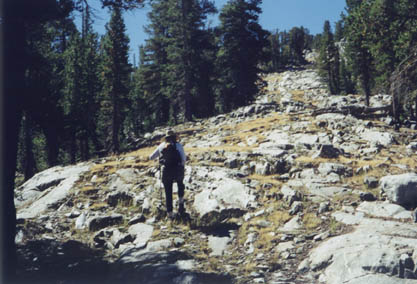 Lynne reports feeling like she has only one lung. 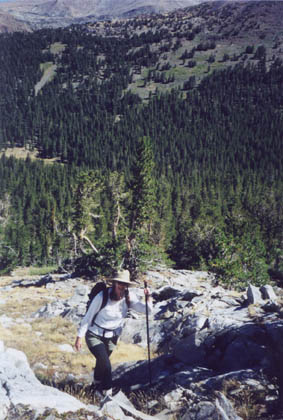 There's a wind-sheltered clearing at the top of the knoll. We rest and eat. Lynne decides to stay behind while the rest of us head for the summit. We turn on the 2-way radios.

Between the knoll and the summit is a grassy saddle. 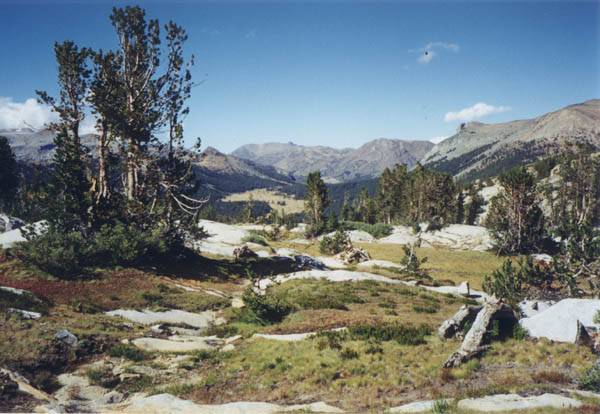 Looking west from saddle. Two false summits (rock pyramids). Real summit to left.
At the top of slope above the saddle, there's a cirque with a snow-melt stream and lush grass.

We climb the headwall of the cirque. There are patches of dirt and grass all the way up, which cement the boulders together and provide easy footing. We aim towards the right end of the long snow bank at top. Urs and Bo go around behind the bank; I follow beneath the snow to the left, then cross over in the middle. 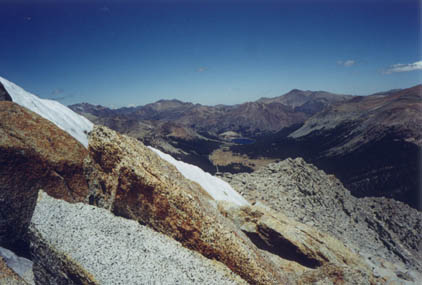 A navigational error.
The summit is very cold and windy. 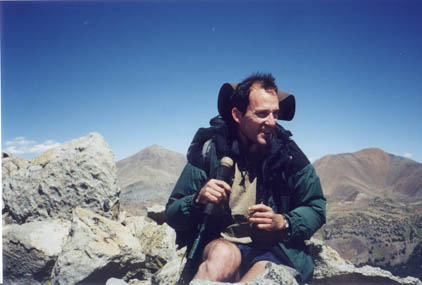 Me, flanked by Mt. Dana and Mt. Gibbs. 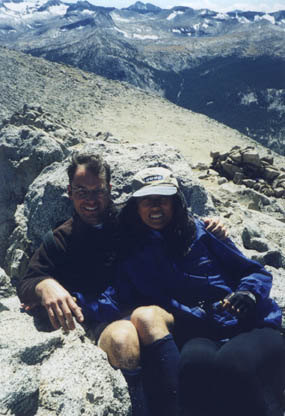 Urs and Bo, protected from the wind. 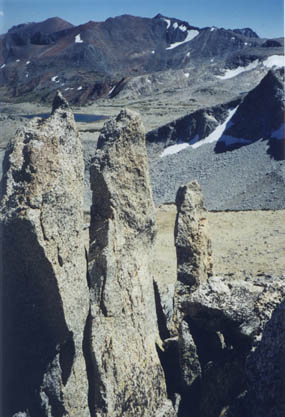 Nasty-looking rocks near summit.
I can't find a register. Urs has brought a split of champagne; the altitude makes it very fizzy. Bo takes a gulp, and it immediately sprays out her nostrils.

I try to contact Lynne on the 2-way radio, but get only an unpleasant buzzing sound; I assume this is static, rather than Lynne.

We descend. Clearing the ridge, we spot Lynne's orange jacket on the rocky knoll. Reaching to the rocky knoll, we find Lynne atop a 20-foot cliff, which she has just climbed. 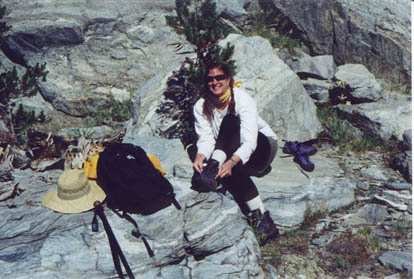 Lynne changes from climbing shoes to hiking boots.
She has ascended to the base of the first pyramid, realized that it wasn't the summit, and settled for a bouldering session there.

It turns out my radio is on 'vox' and the battery is low. Lynne can hear everything: 'Oh my God', 'Look at that view', 'I see her jacket down there', but mostly just the rhythmic rustling of the radio against my parka pocket. She's been broadcasting subliminal messages: 'when I snap my fingers, you will cluck like a chicken'.

The descent is long but pleasant. We reach the car around 5:30. On the way out we admire Lembert Dome and Tenaya Lake. We stop in Groveland for a vanilla milkshake. In Escalon we have a chaotic stop at another drive-in: chicken sandwiches are forgotten and french fries are sadly undersized. Bo has another vanilla milkshake (her fourth of the trip).

The return trip is marred only by Lynne's use of the word equus in the five-letter word game.

Great trip. Compared to Dana and Gibbs, which are huge harsh rockpiles, Mammoth Peak is lush and hospitable - a good intermediate climb. Our route was almost perfect; the only change would be to continue to the far end of the saddle, and follow the stream up to the cirque. Stay to the middle/left of the cirque, then angle towards the right end of the snow bank.