All photos by David Gedye. Click on any photo for a hi-res version (recommended).

Dave Gedye and I had registered for a winter mountaineering seminar to be held at Mt. Lassen, but it was called off because no one else signed up. Dave had already bought plane tickets from Seattle, so we decided to head for the Sierras instead. On the web, I found a Sierra Club snowshoe climb of Pyramid Peak, in Desolation Wilderness near Lake Tahoe.

I pick up Dave at Sacramento International (yeah, right) Airport about 7 PM. We drive up I-80, stopping for burgers at Ikeda's in Auburn, which alas has just closed. Dave abruptly realizes that he forgot to pack the snowshoes he was going to lend me.

We decide to stay in Truckee, and for want of alternative check in at the historic Truckee Hotel, which lacks most amenities but at least is expensive.

Truckee night life is limited. The B of A (Bar of America) features live music: a young man who flagellates a guitar and sings in a voice that grates on my ears. We relocate to even more of a dive, where I am served a White Russian that is so strong that soon I feel as if English were my second or third language. We stagger back. Sleep is punctuated by Amtrak trains that pass directly under our window.

We get up early, a bit hung over, rent snowshoes, and head west, driving around Donner Lake and up to the pass where the Pacific Crest Trail crosses the road (7,090'). Of course we have forgotten to fill our water bottles, so Dave wanders into a nearby structure where, in a surrealistic tableau, a dozen people sitting around a table totally ignore him. Turns out it's a boarding school for young ski racers, and they're taking an SAT test. A proctor tells us to fill our bottles and get out.

We don snowshoes and wander up a hill bordering the Sugar Bowl ski area, rest at the top of a chairlift, then ascend another few hundred feet to Mt. Judah (8,243'). 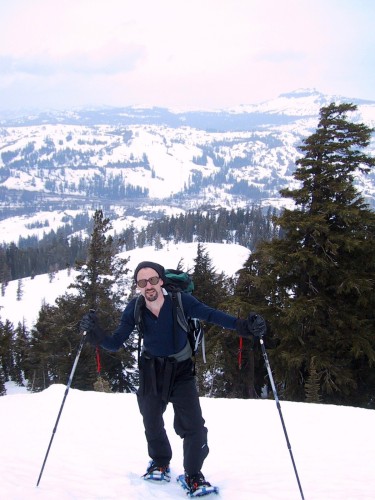 Castle Peak visible back right
There are some huge metal reflectors, presumably targets of powerful microwave radio beams, so we keep moving along the ridge. Mt. Lincoln is a mile or so further, but it doesn't look worth the effort. Castle Peak, several miles to the north, looks impressive. A long train tunnel passes through the mountain directly underneath us. It's a dull, hazy day and Dave feels cheated of the full Sierra experience. We climb a 15'-high pillar of conglomerate rock. 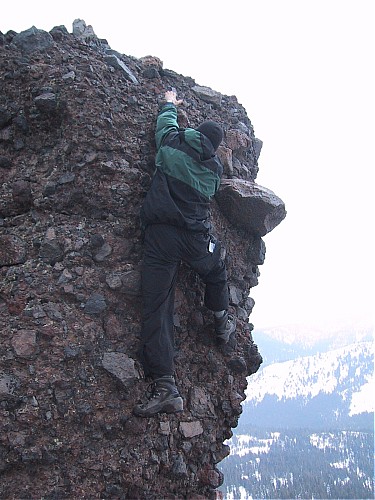 I bust a 5.2 move
We descend the mountain, glissading where we can; Dave has brought a short Thermarest which makes a nice sliding pad.

We eat Mexican food in Truckee, then drive to South Lake Tahoe and vainly search for MSR snowshoes. An oddly blustery salesperson touts his backpacking prowess. We wander the casinos and waste $25 eating in a buffet frequented by large, soft gluttons.

We get up early and drive to the Twin Bridges trailhead, meeting our party: Bob B. (the leader; he's done this climb ~20 times), Jim, Robert, Linda, Sarah, and Chris. We hike towards Horsetail Falls, then head left up the side of the valley, avoiding the major manzanita patches, through some difficult snowfields and up onto a ridge. 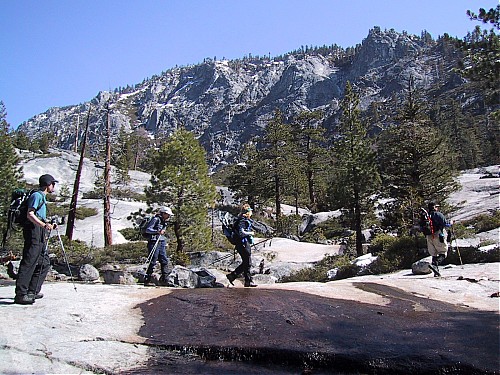 Crossing a low-angle slab
This ridge continues up a mile or so, with spectacular views. 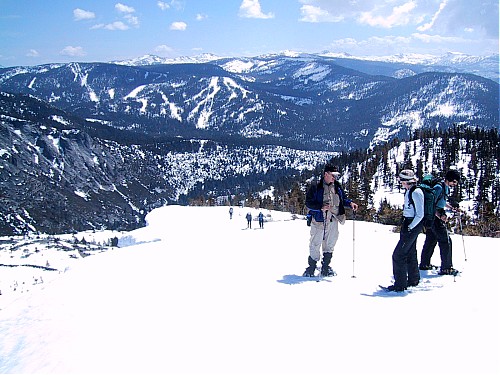 Sierra at Tahoe ski area in background
There's a big cornice towards the top. 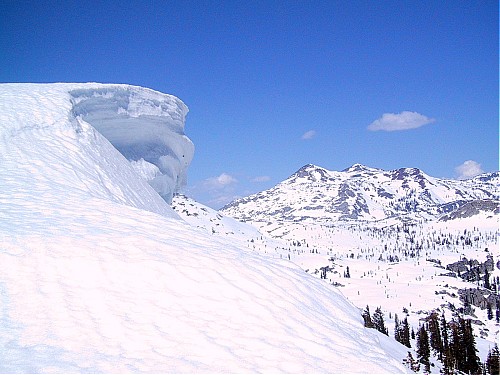 Everyone in the group is strong, but the pace is moderate (60-70%) and there are frequent breaks, so it's pretty easy. The total ascent is about 3,900'.

The ridge ends in a wide plateau with a few twisted trees.

At the other end is a wide steep slope; we leave our snowshoes at the bottom and labor up in boot tracks. Above this, alternating rock and snow patches lead to the summit. 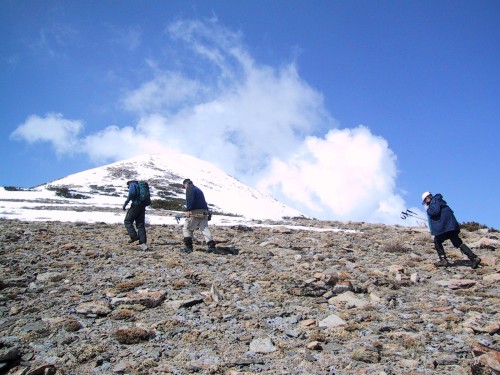 From there we can see Echo Lake (frozen), Fallen Leaf Lake, Price Peak (nasty looking) and most of Desolation Wilderness. Bob B. passes out brownies - his summit tradition. 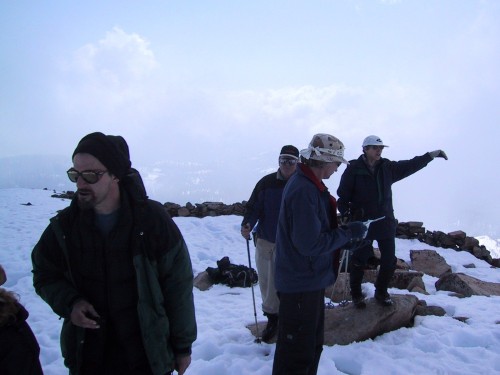 The day starts off clear, but all sorts of clouds form around the horizon, and by the time we reach the top, clouds are swirling around us in a beautiful and dramatic fashion, opening up to reveal distant mountains, enveloping us, then suddenly parting to admit the sun. On the way down some sleety rain starts to fall, but sun shines on the canyon's opposite wall and a rainbow forms. 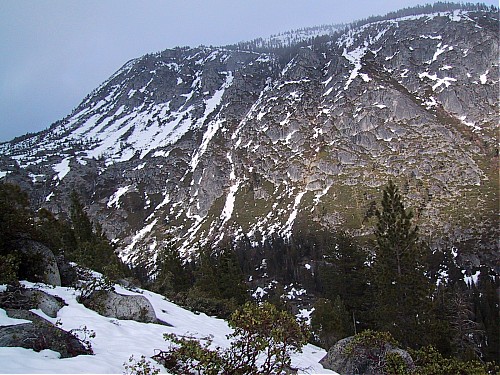 A patch of sun

We glissade as much as possible on the descent. 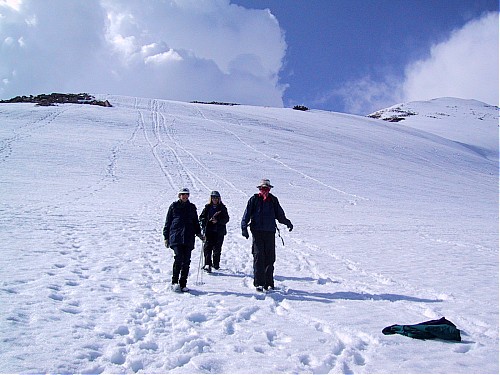 Butt-tracks in background
The sloping granite slabs near the bottom are wet, and I slip and fall twice.

At the bottom, we chat with a pair of backcountry skiers who suggest that we go to Mt. Tallac the next day. Bob B. seconds this, and gives us some route-finding advice.

It has been really fun hiking with the group. Bob is an outstandingly excellent leader.

Back in South Lake Tahoe, we find a better motel, whose manager (a young Indian woman) is very talkative, and speaks with increasing volume, so that our ears are ringing as we head for the room. We drink beer in the hot tub and talk with a shifty-looking guy named Fernando. We find some good Italian food right down the street. On TV, we watch local high-school softball and baseball games on the community access channel.

I've heard that Mt. Tallac is pretty hard, but what the heck. I feel good in spite of a mostly sleepless night. We can't find the waffle place on 89, and eat at the Alpina Cafe instead. 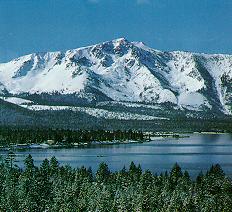 Mount Tallac (picture found on the web). We climbed the right ridge, went across the face and around the back of the summit, then descended the valley between middle and right ridges.

We turn off on Spring Creek road and drive until a dead-end. Starting at 8:30 AM, we walk through a hundred yards of forest, then up a broad slope to the start of a ridge. 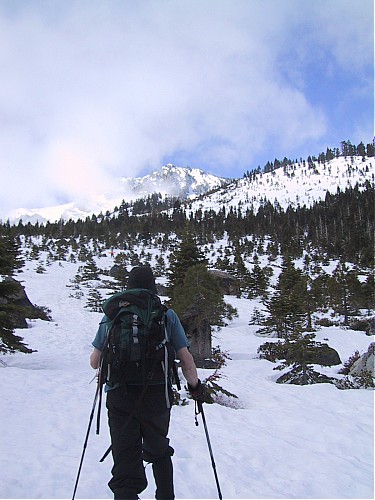 Snowboarder faintly visible ahead of me
A number of skiiers and boarders are walking up too, and eventually all paths converge to a single boot track. We take off snowshoes - it's easier just to walk up the snow-steps. It's a long Stairmaster workout with a great view. Even though it's 40-ish, I overheat in my T-shirt. 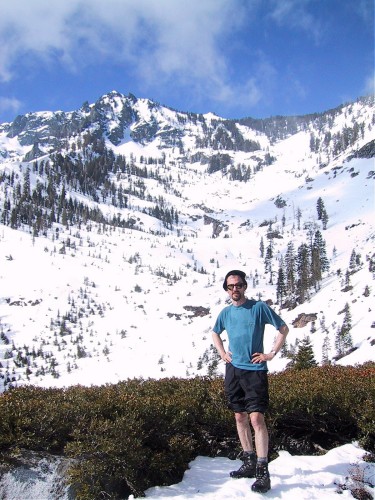 I'm hot
We hear a bird with a strangely deep call, perhaps a Subwoofer Bird. 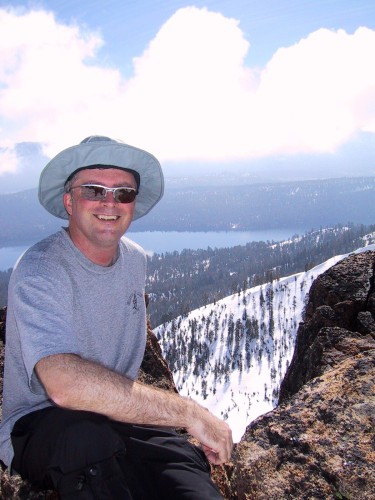 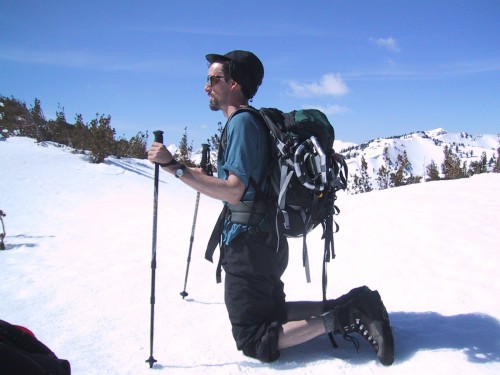 A quick break
We go along this ridge, then traverse across the top of the main bowl. The last hundred yards involves sharp wobbly rock.

We reach the summit at 11:50. The morning overcast has burned off, it's calm and warm, and there's a fantastic view in all directions. Some snowboarders are chilling at the summit, smoking weed and saying 'Dude' and 'right on'.

Even the dog is stoned
We survey a couloir, with ski tracks, that has got to be at least 70 degrees at the top. 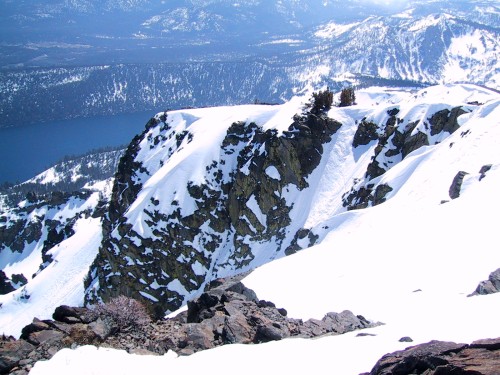 We descend via a large valley which looks steep enough to glissade, but the soft, wet snow makes this difficult; snow saucers would have helped a bit. 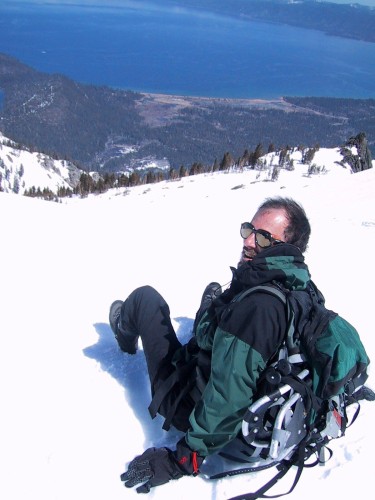 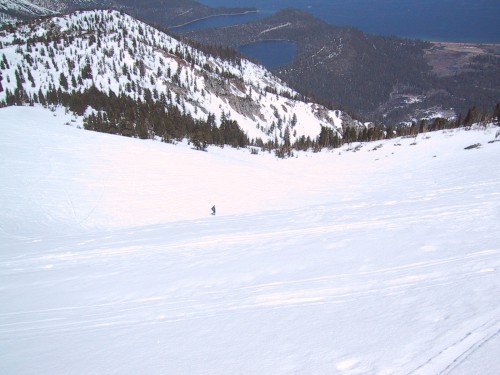 15 seconds later
We do a lot of thrashing and flailing but still manage to make it to the bottom in about an hour. Dave has left two beers embedded in a snow-bank. 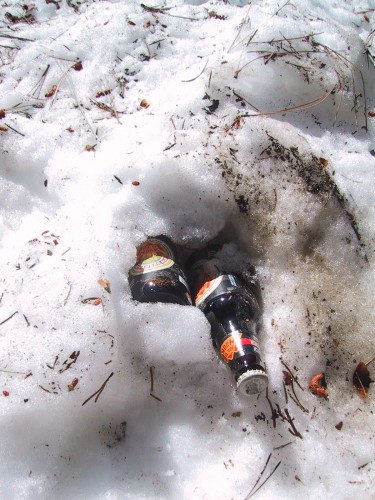 The drive back to Sacramento is delightful. I drop off Dave at the airport, then stop at Murder Burger in Davis for an ostrich burger.

Continuing the oral tradition, I recite 'Casey at the Bat' and Dave gets through most of an alternate version in which it's an away game for Mudville.

Dave poses a series of questions involving density. In the end we settle on: what volume, containing a single hydrogen atom, has the density of the universe? Of the solar system? I seem to recall that it's about a cubic Km in the first case.

We both have mild sunburn, having forgotten sunscreen on the first day. Nothing other than that, which is miraculous since I've had a very sore back recently, a strained calf muscle, and other aches and pains. Walking in snow is very easy on the joints. I return feeling better than when I left, highly energized, and wishing that I had another peak to climb tomorrow.