David Gedye and I had originally planned a 3-day, 2-night backpacking trip along part of the Wonderland Trail, a 100-mile loop that circumnavigates the enormous Mt. Rainier. However, winter dropped about 80 feet of snow on the mountain, and even by late July most of the trails and backwoods campgrounds were still under snow. So we had to improvise.

Dave picked me up at Seattle airport and we drove about 3 hrs to the Ohanapecosh campground in the southeast corner of the park. Our reservation had been lost somehow, but we found a vacant site, pitched our tents in the gathering darkness, tried unsuccessfully to scavenge some firewood, and retired early.

Friday morning we drove back to Paradise Lodge on the south side, and (after chatting with an extremely tall Rangerette) climbed to Camp Muir. 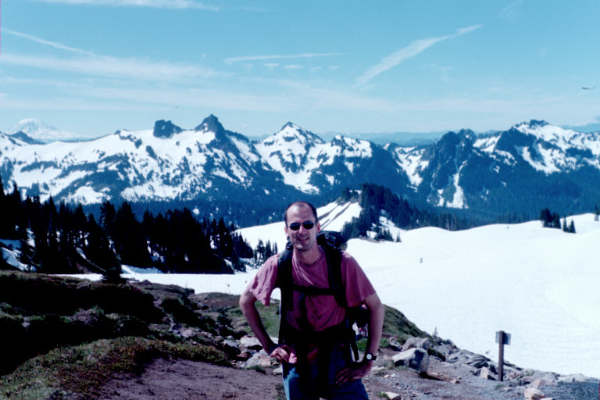 Except for occasional rock outcrops, the hike was entirely in snow, even the meadows above Paradise that are justly famous for their summer flowers. The trail is about 4.5 miles each way, and ascends from 5,400 to 10,000 feet. The last couple of miles go directly up large snowfields. It's steep, but you can brake yourself if you slip. I had my telescoping shock-absorbing aluminum hiking pole, which doubles as an ice axe. 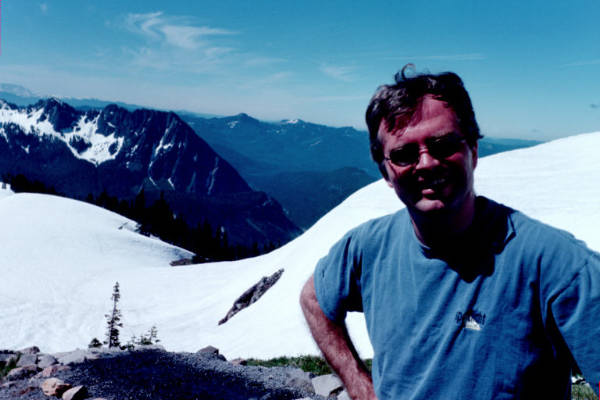 The day was fabulously sunny and clear, with clear views of distant peaks (Adams, Hood, St. Helens). They say the mountain makes its own weather, most of it bad. There were some jokes about Dave making a bit of his own weather.

Camp Muir consists of a few stone huts in a notch. 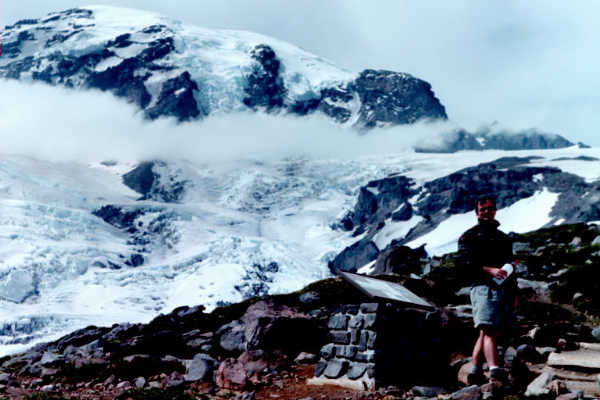 The easiest path to the summit goes through it - you stop there, sleep a bit, start out at 1 AM for the summit (to avoid slushy snow) and descend to Paradise the same day. We amused ourselves by stopping returning climbers - exhausted, dazed, brains starved for oxygen - and asking them to define 'peripatetic'.

We made it to Camp Muir in 3.5 hours, had lunch, and descended quickly, Dave attempting to slide on his rear part of the way (didn't work - wrong wax).

Dave had some altitude-related dizziness; my back bothered me on the descent and my boots were totally sopping wet but other than that it was pretty easy. Back at the lodge, Dave had a beer, I had soft-serve ice cream, and we listened briefly to someone playing 'luded-out cocktail tunes on a log-encased piano.

We returned to Ohanapecosh, managed to get a tent site (cancellation), ate our reconstituted dinner, and headed for the Amphitheater to see the Ranger Show. A young, nervous ranger (Brian Zweibel) tried to warm the crowd up with lame jokes, then gave a high-powered lecture on regeneration and succession in forests (it takes 1,100 years for the forest to reach its final steady state, in which cedar and hemlock has displaced the faster-growing Douglas fir). I greatly enjoyed the talk, and it took me back to some of the Ranger Shows of my youth at Yosemite and Sequoia.

We bought some firewood and Dave (using only a quarter-sheet of paper as starter) built a roaring fire, which I used to dry my boots and socks (inexplicably, I had only brought one pair). I attempted to recite 'The Cremation of Sam McGee', with mixed results.

The next morning (Saturday) we followed a ranger-led tour of the Grove of the Patriarchs, a 1000+ year old stand for Douglas fir and cedar on a river island, hence spared by fires.

Spurred by my need for a cappuccino, we then drove south out of the park to the town of Packwood, ate hamburgers, and toured their yearly cultural event: a Hot Rod show. 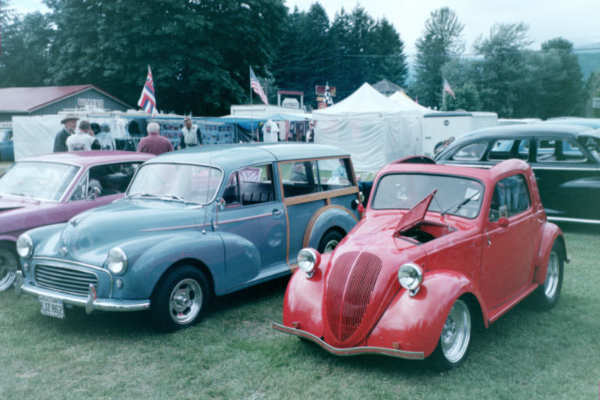 We then drove towards back into the park (with a 20-mile detour error towards Yakima), playing Vermicelli and Quint (my newly-coined name for the five-letter-word game), and then on to the White River campground, where we secured a site and took a medium hike up the hill towards Sunrise (stymied eventually by snow). 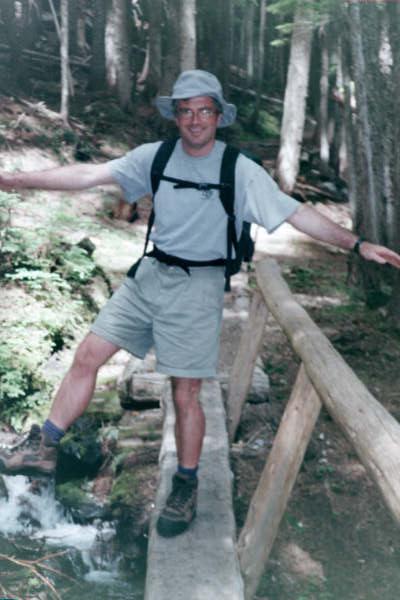 The White River is the melt from the Eamonns Glacier, the largest of Rainier's 20-odd glaciers. Its whiteness (curiously omitted from Melville's 'The Whiteness of the Whale' chapter) is from powdered rock (flour) ground by the glacier. The second most popular summit route leaves from this campground, so there were lots of climbers. Loaded with helmet, ice axe, crampons, etc., they radiated a certain energy: focus and determination on the way up, exhaustion and accomplishment afterwards. I felt a bit of envy. 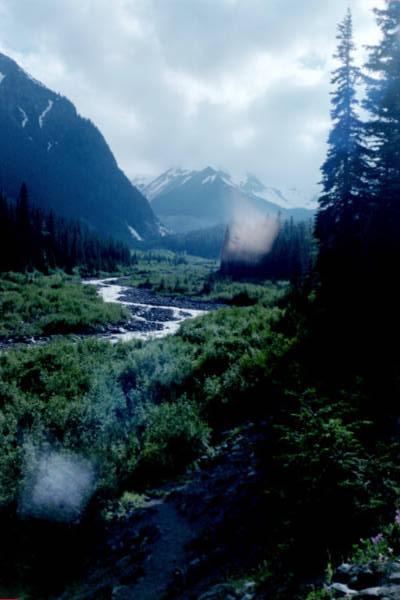 There was another Ranger Show, this one about glaciers and aimed at small kids, with lots of audience participation. A 5-year-old attempted to set a world record for Most Annoying Questions by Precocious Kid. Dave and I sat in the back and sipped single-malt Scotch from an unbreakable plastic flask. 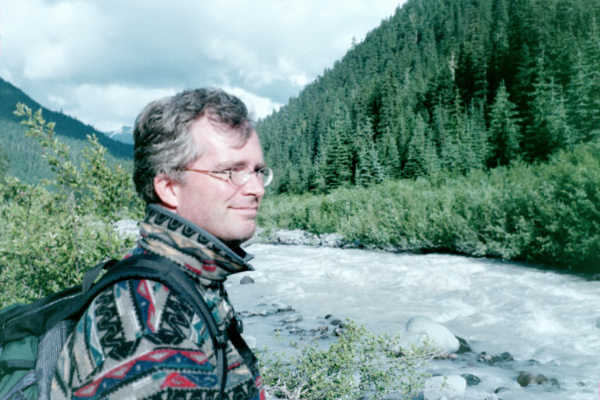 Sunday dawned clear and cold. We drove to Sunrise Lodge. Dave phoned his wife Chris, and I tried to get him to fake a Rob Hall scenario (bad taste, I know). 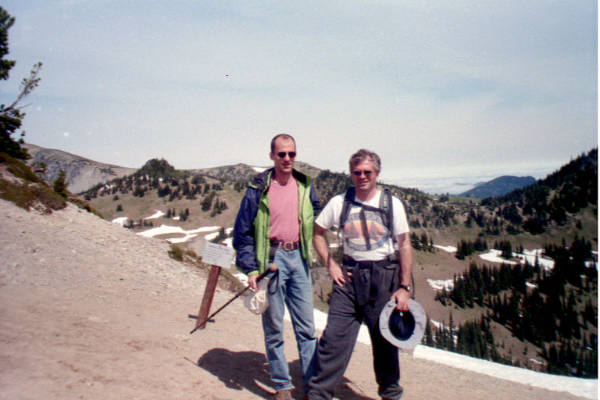 From Sunrise we did a 6-mile hike to the 2nd Burroughs mountain, which afforded incredible views of several glaciers and the summit (and, in other directions, the Olympics, Mount Baker, and other Cascades peaks). 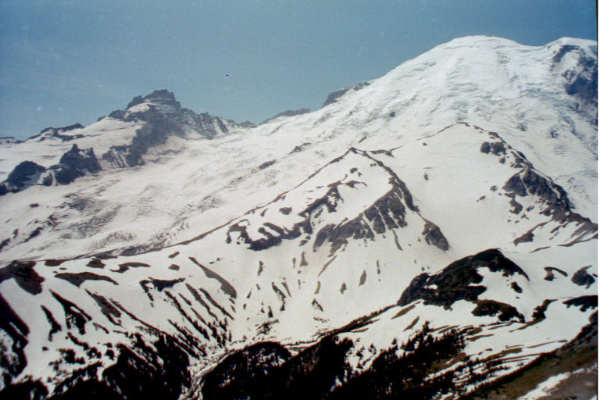 We could see, ant-like, a party ascending Inter Glacier (or perhaps they actually WERE ants). Several rock squirrels circled us, hoping for orts from our cheese/salami sandwiches. I managed to whack one (lightly) with my hiking stick.

The hike had one extremely scary part: a traverse of several hundred yards across a snow field so steep that, if you got going, you'd slide all the way to the rocks at the bottom. 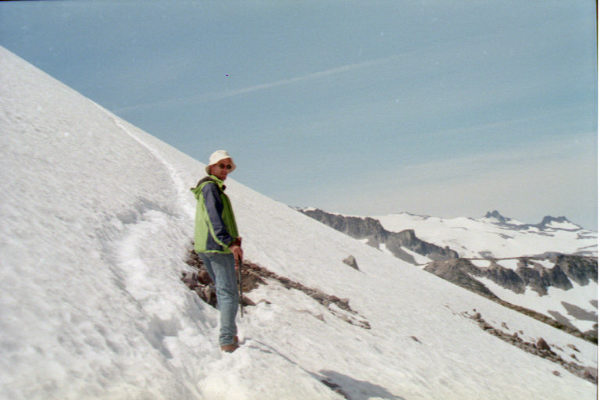 Wobbly from lack of sleep (I didn't sleep much on the last 2 nights) I struggled to focus on my foot placement and balance, and to keep breathing. This bit of danger was the icing on the cake - without it, the trip would have been incomplete.

Although we didn't do any real backpacking, Dave and I were extremely pleased with the trip; it will serve as a warmup for a return visit next year, when hopefully the snows will have subsided a bit. (Although there's still a bit of unfinished business with Lionshead Peak in Montana). Rainier is one of the most amazing natural places around; with its meadows, tundra, old-growth forest, rivers etc., it would be great even without the mountain. There was also some talk of a summit ascent someday; we'll see.