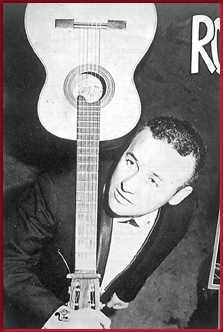 Rolando Alarcón was a Chilean singer/songwriter of the 60s and early 70s. I heard some of his music when I lived in Ecuador in 1967/8 - my mother Alice had a tape of it, courtesy of some local Peace Corps workers who had traveled to Chile. We listened to it over and over. I loved the songs, and they have haunted me ever since.

Alarcón's lyrics are romantic, humanist, patriotic, profound and beautiful. His music blends a strummed-guitar folk sound with the drums and panpipes of indigenous Andean music, and the harmony is fresh and creative. The overall sound is unique. Alice says: "As a folk poet as well as a musician, Alarcon beats Dylan all hollow." As great as I think Dylan is, I have to agree with her.

Alarcón died in 1973. In an interview, Patricio Manns says that Alarcón suffered an internal hemorrhage and was taken to a first-aid station instead of a hospital, that the doctors there refused to operate on him because they were enemies of Allende, and that he died after five days. This was about 6 months before the Pinochet coup. (A relative of Alarcón says this story is apocryphal: that Alarcón was in Chañarall and had a bleeding ulcer, that he travelled to Santiago, was admitted to a hospital, and died on the operating table.)

A year ago, after an unsuccessful attempt to copy the old reel-to-reel tapes to CD, I started looking for the music on the Internet. Finally, thanks to my friend Emilio in Barcelona, who asked his friend Leonardo in Chile, I tracked it down and got a copy on cassette. The release is called "No Juegues a Ser Soldado". After many late nights (and many tears) I completed a web page of No Juegues a Ser Soldado with the music (in MP3 form) and the lyrics in Spanish and English .

If you have, or know of, any other Alarcon recordings, please email me. With all the technology in the world, I think it's criminal that great and historically important music can disappear forever, to be replaced by a million pressings of 'N Sync, etc.

Many thanks to Kristina, who supplied most of the MP3s.

An excellent biography of Alarcón, and a very complete discography, can be found on Wikipedia