Ron Kuivila is in L.A. for a David Tudor symposium and arranges to come up to the Bay Area for a whirlwind hiking trip. He hasn't seen much of the Sierra, and I'm eager to show him what I've discovered. Mt. Conness is the obvious choice, and we can stay at the Mono Lake desert camp.

I pick Ron up at the airport. Ron observes that the car is making a noise like an unmuffled hot-rod engine. The noise is emanating, however, from the vicinity of the rear tires. We swing by Todd's house to pick up climbing gear. As we leave, I notice that my battery light is on, though it goes off after a minute.

We lunch at a taqueria in Escalon, and stop at the Big Five Sporting Goods in Oakdale, looking for a climbing harness for Ron. No dice. The battery light comes on again, then goes off. Ron reiterates that I deserve a new car, and lauds the turbo-diesel Passat.

As we go up the long hill towards Groveland, the battery light comes on and stays on. Time to start worrying about the alternator. We pull into a garage on the outskirts of Groveland (just pass the 'Tie-dye jerky' sign).

Sure enough, the alternator is shot. If we try to reach Lee Vining, we'll need headlights, and the car will die in the middle of nowhere. The garage folk check around - the part is not in stock locally, we'll have to wait until tomorrow morning. Disaster! But they suggest that the Kragen down in Sonora might have it,

So we turn around and drive to Sonora, arriving about 5 PM. Kragen has the part, but how to install it? The salesperson, Mark, takes us out into the parking lot, and covertly offers to install it himself the next morning - a man's gotta do what he's gotta do, after all.

My Civic is parked next to a Datsun B510, which it turns out belongs to Mark, and he's in the process of replacing its enging with a Chevy V8 - yikes! Ron is fascinated by the display of wall-mounted carburetors inside.

I tell Mark the we really have to get it fixed tonight. He knows a guy who might be able to do it - Duke. He calls Duke, who's busy and says he'll call back. We wait around the Kragen for a while, then decide to head to Duke's garage. As we leave, I notice a weathered blond woman looking at me intently. She follows us outside and approaches us, saying with considerable conviction that she overheard the discussion and she feels obligated to tell us that Duke has botched several major repair jobs for her, and we should think twice before having him do work on our car. She brings up her ex-husband a couple of times, I forget how.

We give this advice due weight, but we have no alternative, and it's a simple job, so we go to Duke's garage, which is next to a tattoo parlor and has about 20 derelict cars scattered around. Duke, who looks like a thinner and more tattooed Hulk Hogan, is underneath a Jeep Cherokee. He says he can do the job, though it might take him until midnight to finish. The woman in the office repeatedly says how 'good Duke is at what he does'; me thinketh she doth protest too much.

So Ron and I have a few hours to kill. We explore Sonora, whose occupants include both native rednecks and ex-hippy refugees.

Then we head back out past Duke's - who's still working on the Jeep - and into the strip-mall hinterland beyond. We find an N-plex movie theater, see the start of 'Wickham Park', then switch to 'Hero' with Jet Li. When we return to the garage at 10 PM, the car is ready. I pay Duke (who's ready to head for the bar) and we chat - turns out he was born in Berkeley a year before I was.

We drive back towards Groveland. A new noise - an intermittent flapping/whacking sound - is coming from the vicinity of the alternator. Has Duke messed up again? I reduce speed and drive on. We check out the historic Groveland Hotel, which wants $255 for a room, so we settle for the Motel instead.

We get an early start next morning. The car behaves OK, and we're at the Conness trailhead shortly after 10 AM. I haven't slept well and feel like crap - low energy and a latent headache - so the hike, although enjoyable as always, is a bit of a struggle. I expect a second wind but it never arrives. Ron does extremely well, and we're on the summit shortly after 2 PM. 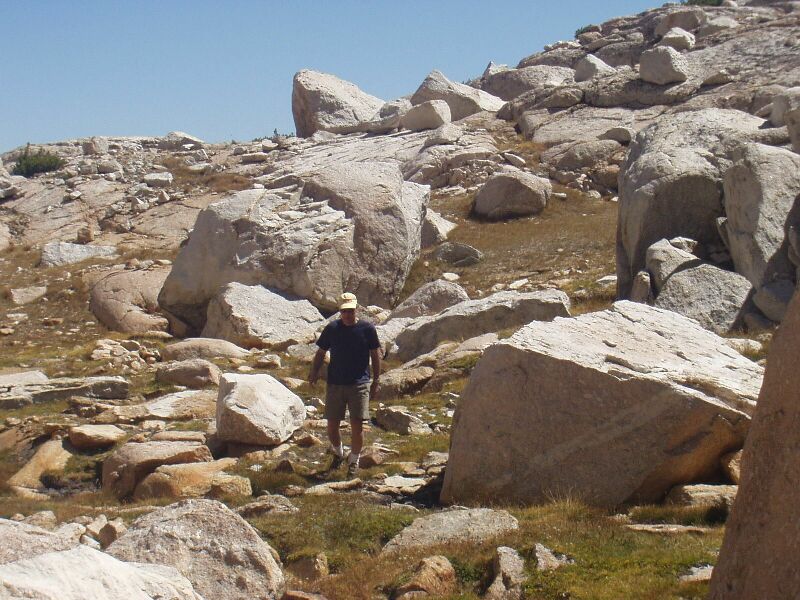 On the plateau above Glacier Lake 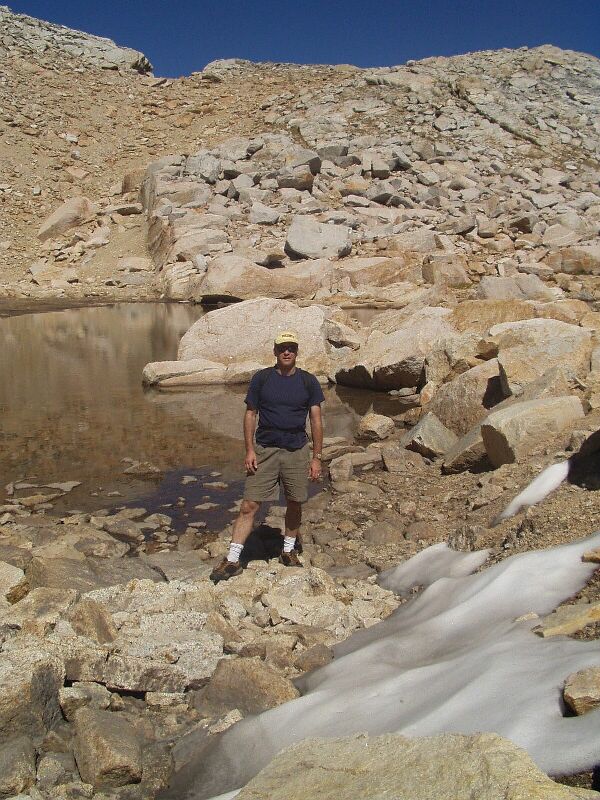 Small lake on slope above plateau 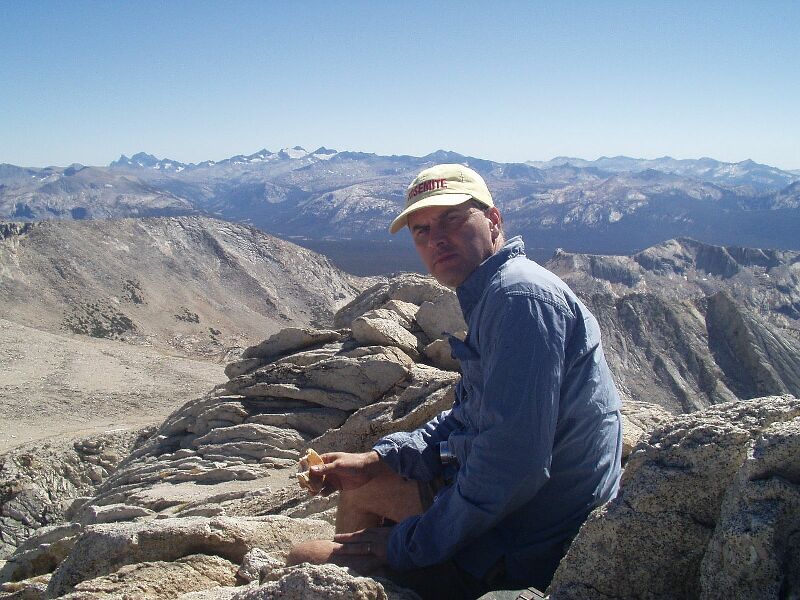 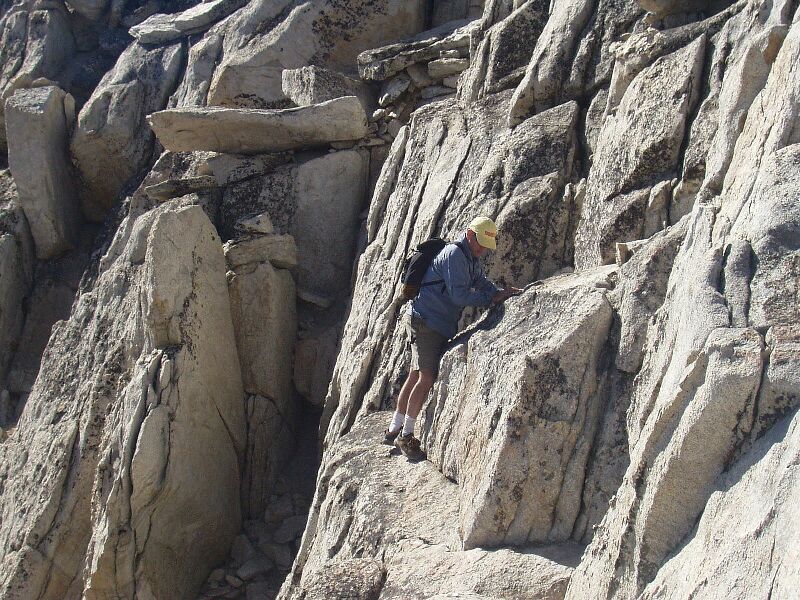 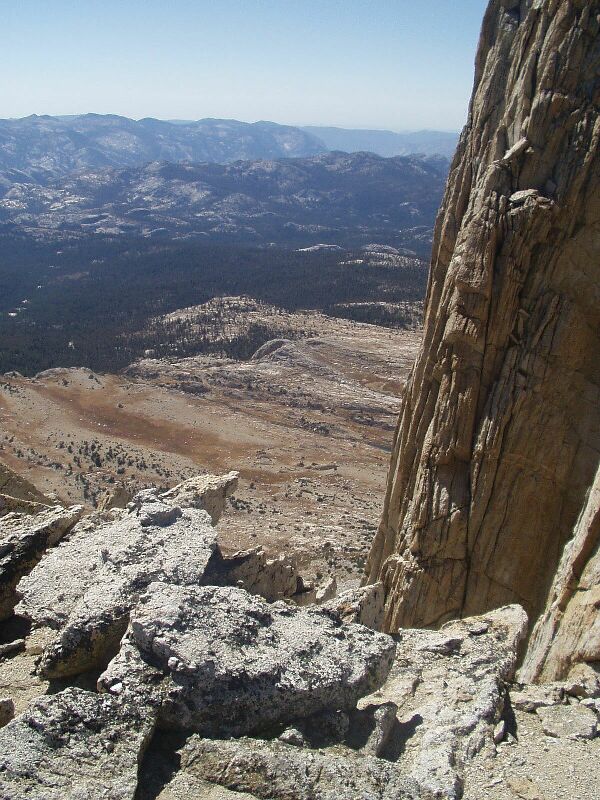 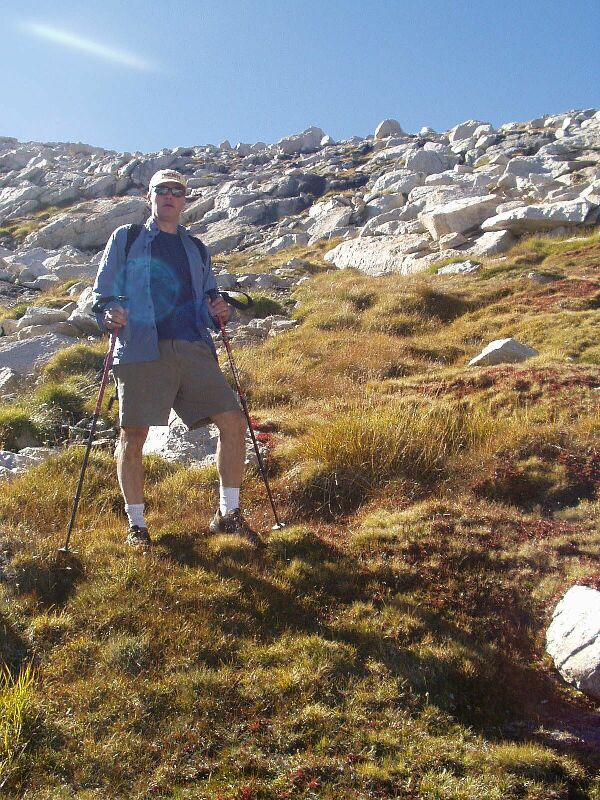 I guess that over the years I've learned how to descend steep Sierra terrain efficiently - I think of it as flowing down the mountain, doing a little quick-step dance - but the descent is harder for Ron. So we're both pretty beat by the time we reach the car. Ron's knee is slightly tweaked.

We enjoy the beautiful drive down to Lee Vining. We have dinner at the Mobil station - I have venison Ossu Bucco, which is extremely good and massive - and Ron is impressed.

Ron likes the idea of a Jacuzzi, and camping seems less attractive now. Unfortunately there's no vacancy anywhere in Lee Vining. Fortunately Ron, appealing to a desk clerk, gets the suggestion of June Lake, which is only 10 miles down the road. We go there and get a room for $88 in the Boulder Lodge, a motel that I highly recommend. Their office has large numbers of hunting trophies, the Jacuzzi is ample, and the rooms are clean and comfortable.

Next morning I feel great, but the car has developed a new issue: on startup it dies twice, then relucantly starts if you gun it the 3rd time. We return to the Mobil station, which also serves a great breakfast (the egg sandwich is highly recommended).

Because my harness doesn't fit Ron we scrap rock-climbing plans and instead head for Mt. Hoffman. We reach the trailhead at 9 AM, summit at 11:15, and are back shortly after 2. We do a more direct route than normal, heading for the ridge well short of the saddle, and doing some 3rd-class stuff that makes us feel like real rock-climbing studs. Today I feel fantastic, and am neither tired nor sore afterwards. 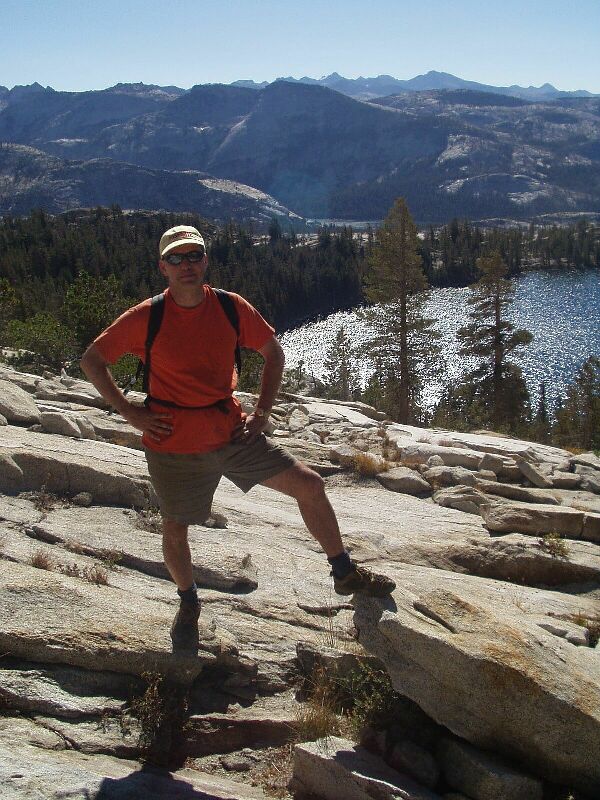 Slabs above May Lake 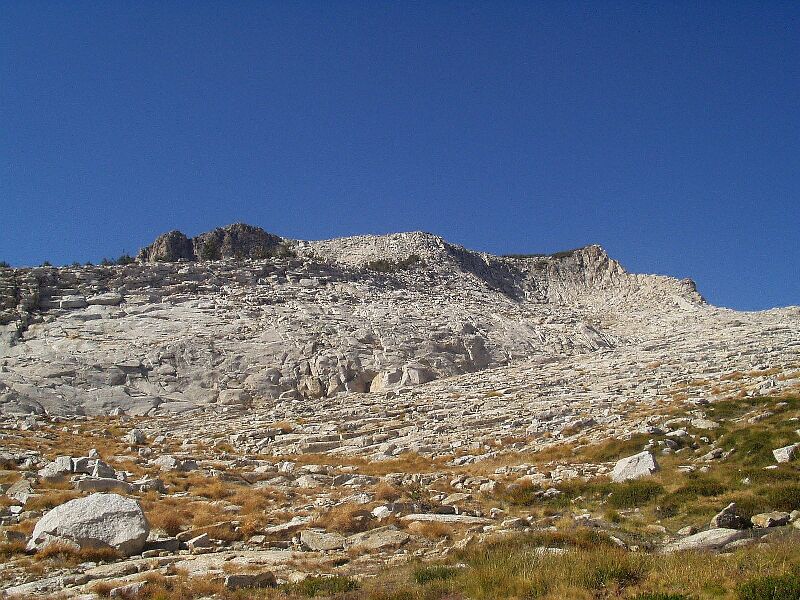 We climbed slabs on left side of this picture 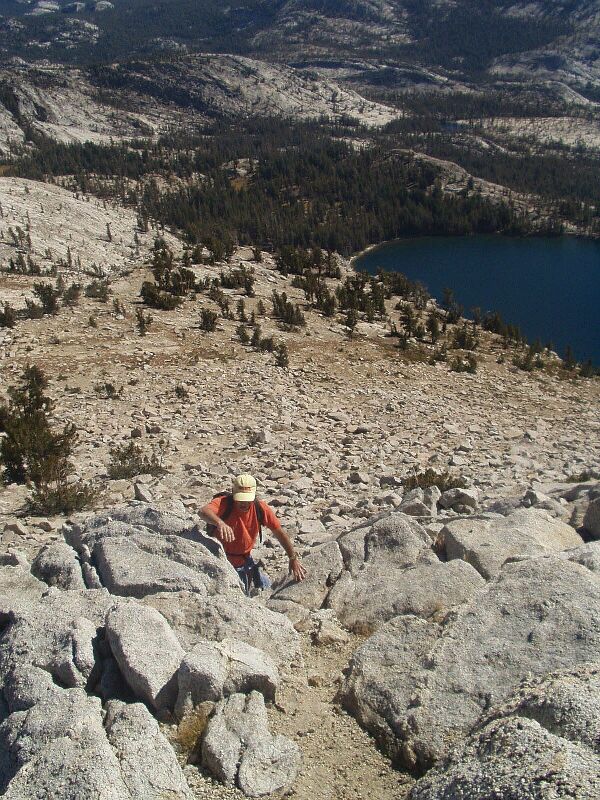 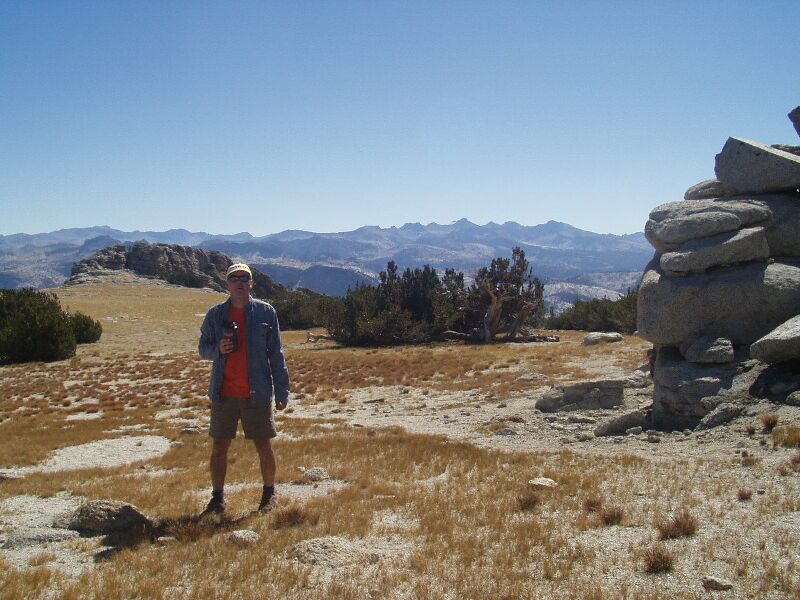 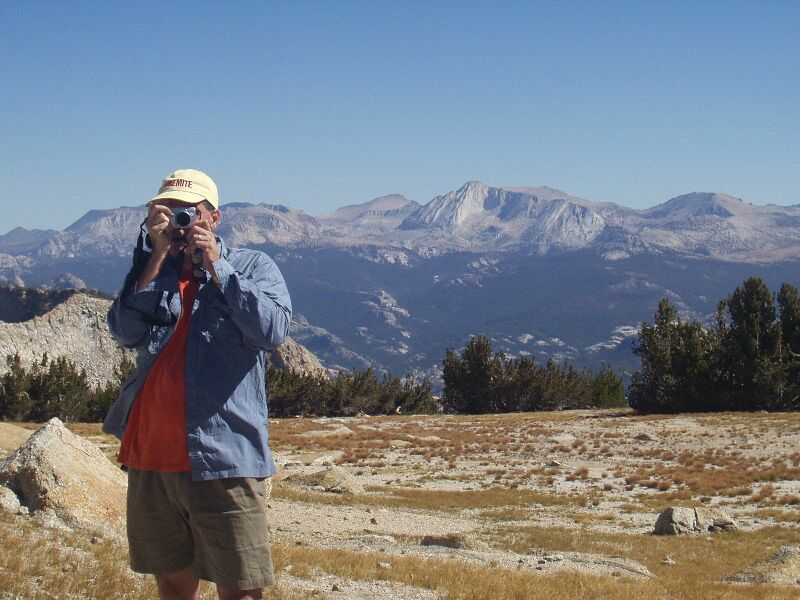 We head back. The flapping sound returns. Between Buck Meadows and Groveland it suddenly gets real loud, and I pull off the road. We examine the alternator - the belt looks OK. Then I notice that the wheel-well liner has come off at one end, and is flapping around (the same thing happened on the other side last year). Ron finds a bit of shredded fan belt by the side of the road, which I stuff into the bolt-hole as a stopgap.

We limp into Groveland and return to the same garage as before. I'm apologetic about my car, but the mechanic says all cars fall apart in the heat of summer - the plastic parts melt. He spends about a half hour trying to find a nut and bolt. They charge me $10, which is good because if they did it for free I would have slipped the guy a twenty.

The drive back to Berkeley is uneventful, and we arrive in time for a quick dinner with Erica before Ron's 9:30 flight. The starting problem gets worse - later, making a beer run, it won't start at all, and I take Erica's car.

The trip is a fantastic success - the car trouble provides an element of entertainment, struggle, and triumph, without substantially interfering with our climbing goals. We're happy that it's the car, and not our 50-ish bodies, that's giving out.

A final and deeply personal note: this was the final voyage for my Asolo hiking boots. which have been my companions on every significant trip of the last 5 years, from Whitney to Rainier, and have always given me a wonderful feeling of invincibility. However, they have become home to colonies of various microorganisms that combine to produce a noisome, miasmatic stench at the end of the day. Rob V and Dave Rockower will bear witness to this, and are doubtless pleased that the Asolos have gone to Boot Hill.