Ron K., Dave G. and I are kindred spirits and we like to get together to hike, discuss life and the state of the world, and knock back a frothy lager or two. We had planned to meet at Ron's place in Estes Park CO but that was derailed by the fiery demise of nearby Mary's Lodge. So we shifted the venue to Seattle.

I have a pleasant evening flight, chatting with Andrea, a Korean nutrition student at UCB and former missionary. I meet Ron, who arrives from ORD soon after I do, at his gate, and Dave picks us up. There's concern about the weather - possible rain both days - and even more concern about the smoke that's blown in from B.C. wildfires. We have a beer and I tell the story of the piano steps.

I sleep fine, although Ron gets up early and the symphony of tiny rustling noises keeps me from sleeping more. We have a hiker's breakfast of eggs, toast, and lots of bacon. On Mercer Island we stop at a grocery store to buy sandwiches and other trail food.

We turn off I-90 onto a logging road that looks familiar because Dave and I took to it on our way to Bandera Mountain a few years back.

But this time we go to the Olallie Lake trailhead. The trail goes through a pine forest and has the wonderful springy feel of compressed needles. It's heavily traveled and well-maintained; new fancy log bridges are under construction. 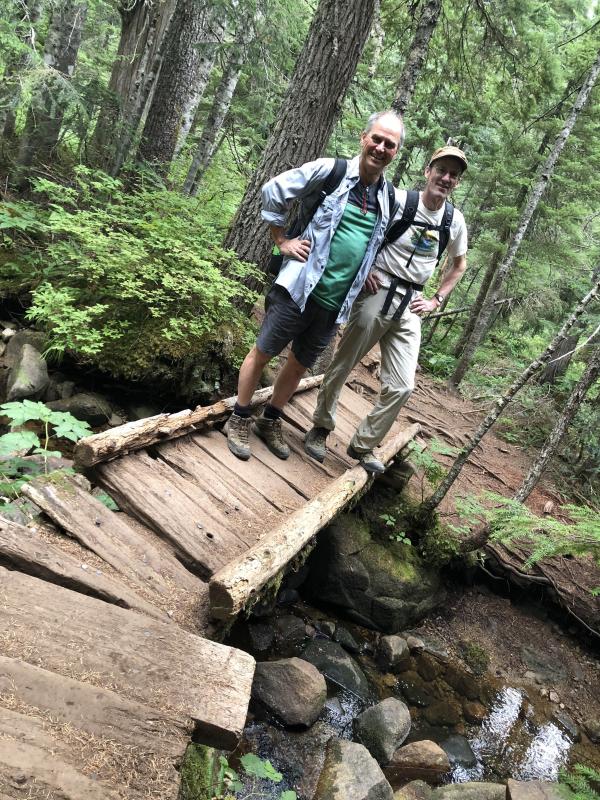 We talk about Deep Learning and Gesualdo.

We reach the lake and have lunch on some floating logs. 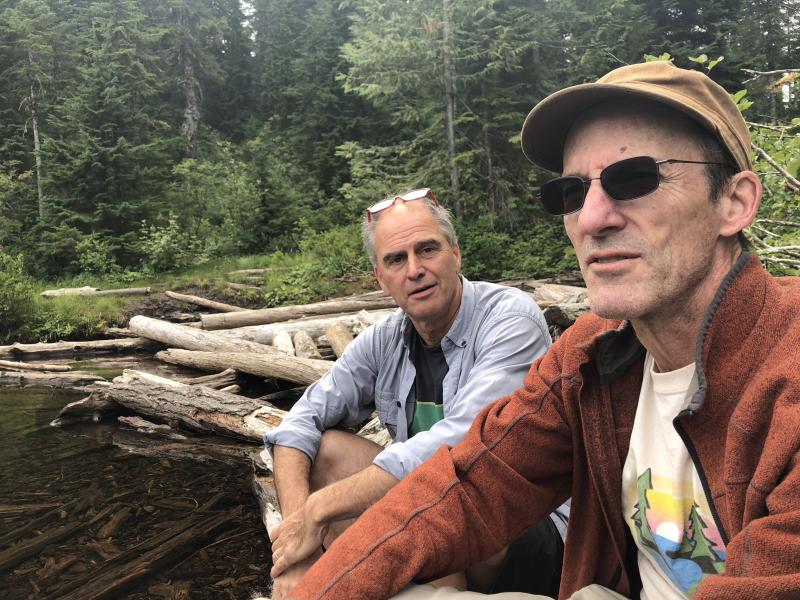 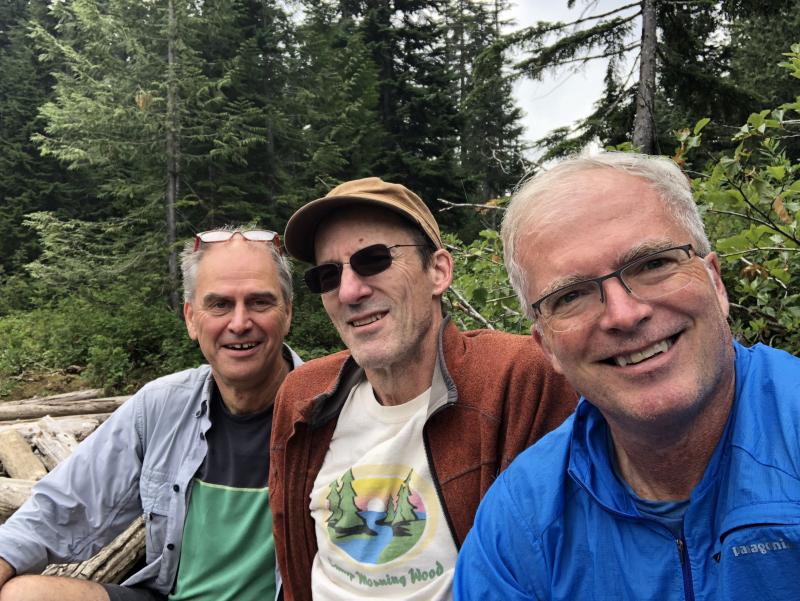 An extremely aggressive bird snatches Ron's sandwich out of his hand. There are lots of wild blueberries, which are tart and unripe but still tasty.

On the left side of the lake, a slope leads up to a ridge, on the other side of which is Pratt Lake. We decide to get on the ridge and take a look around. We walk around the left side of the lake, trying to find a trail that goes up. There's a web of semi-trails, all of which peter out in some kind of muddy bog. At one point my left foot unexpectedly sinks in mud all the way to the top of the boot, and I have a damn hard time getting it out, to the mild amusement of Ron and Dave.

Eventually we get fed up, say to hell with trails, and just head straight up the hillside, which is easy going. Dave posits that you don't know an area until you've bushwacked through it, and I completely agree.

We reach the trail at the top of the ridge. We can't find the trail down to Pratt Lake, so we just come back down (by the actual trail, which somehow we didn't see earlier). 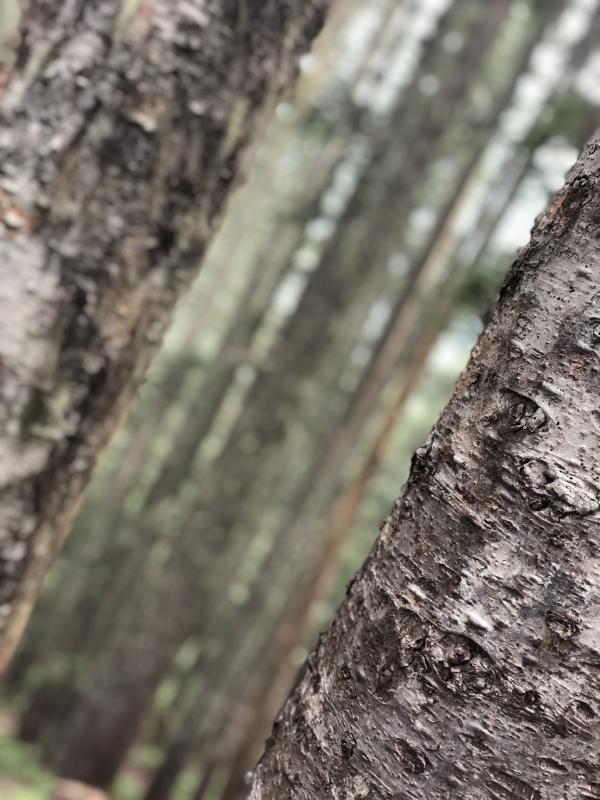 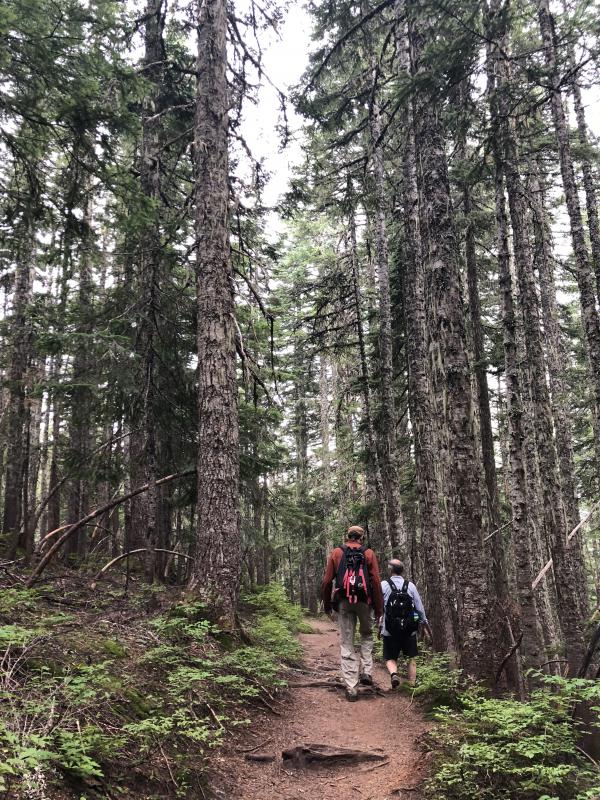 We drive back into town, stopping at a Whole Foods-like co-op grocery store, where we get stuff for a BBQ: salmon, lamb, veggies, chips, salsa, beer, pie.

Back home, we spend some time doing yoga, headstands, and other stretch/balance stuff. 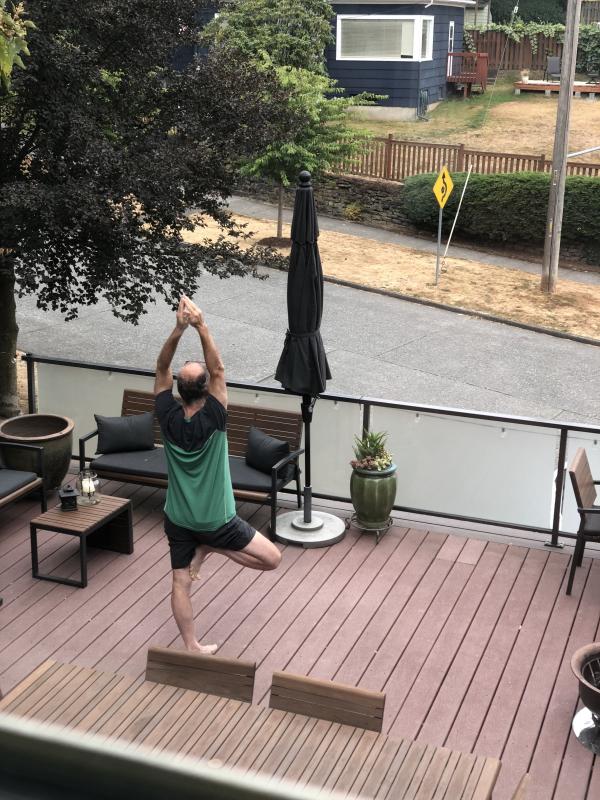 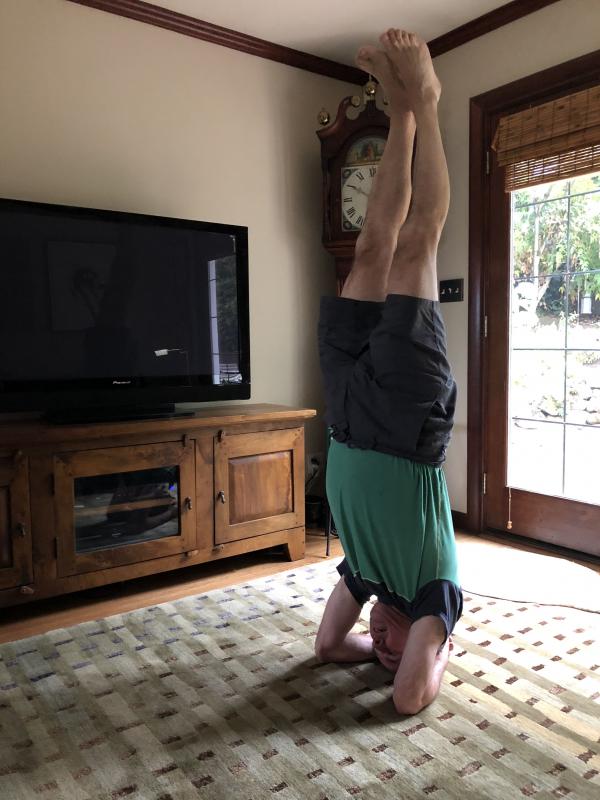 Dave has a "wobble board" which is challenging even with 2 feet. Ron gets the hang of it quickly, and manages to stand on it on one foot, and then do warrior 3 (well, almost).

We fire up the Weber grill and cook the lavish BBQ feast. I can't find horseradish (for the salmon burgers) in Dave's fridge, but there's a bottle of green curry paste that turns out to work extremely well. Ron and Dave polish off a bottle of white wine.

After dinner we watch a comedy/horror movie, "Get out", in which a young black man meets the wealthy parents of his white GF. Subtle racism gradually transitions into something way more sinister. We greatly enjoy the film and discuss its nuances the next day.

Today's hike is longer, so we get up early and are on the road at 7. We stop at a MacDonald's along I-90. I get the "sausage MacGriddle" or some such nonsense, in which "the syrup is baked right in!". I can't believe I'm doing this.

There's a steady drizzle, but beyond Snoqualmie Pass it more or less stops. We discuss various math problems, including the Putnam problem with random points on a circle or sphere. We turn off I-90 and are on the trail at 9:15.

Our hike is at Esmeralda Peak. There's a 12 mile path that circumnavigates it, with a gross elevation change of 2,500' At the high point of this path there's a house-size boulder, and from there you can leave the trail and bushwhack up to the summit, gaining another 1,000' or so.

Of course this excites us, but the summit is enshrouded in the fog and it doesn't seem it's worth the trouble. Plus being in steep terrain in the fog is probably not a good idea. So we keep going around the loop.

We run into a robust young woman hiking by herself. I identify her accent as midwest; in fact she grew up in Kansas.

The trail descends to a small muddy lake. 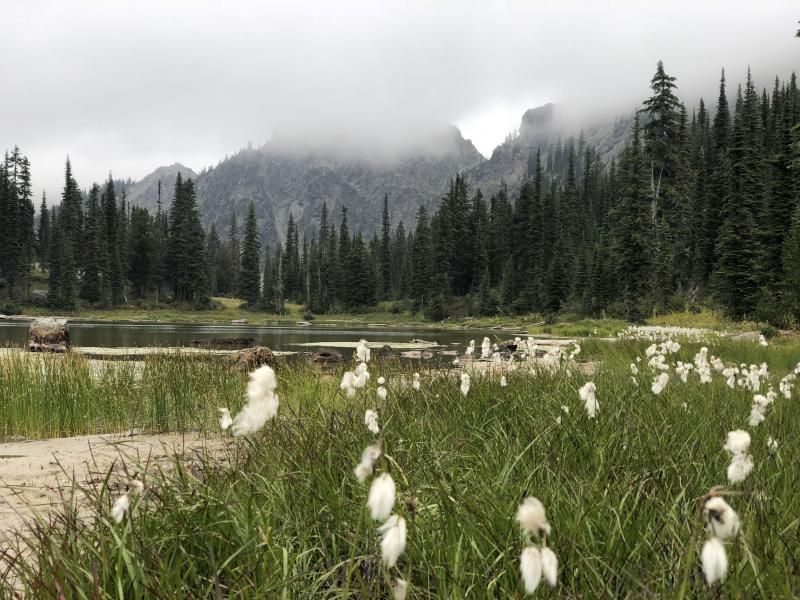 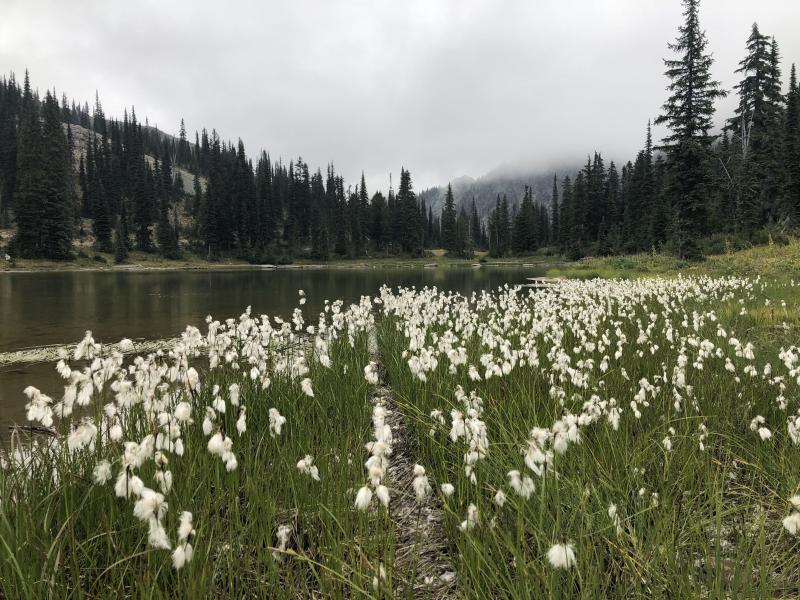 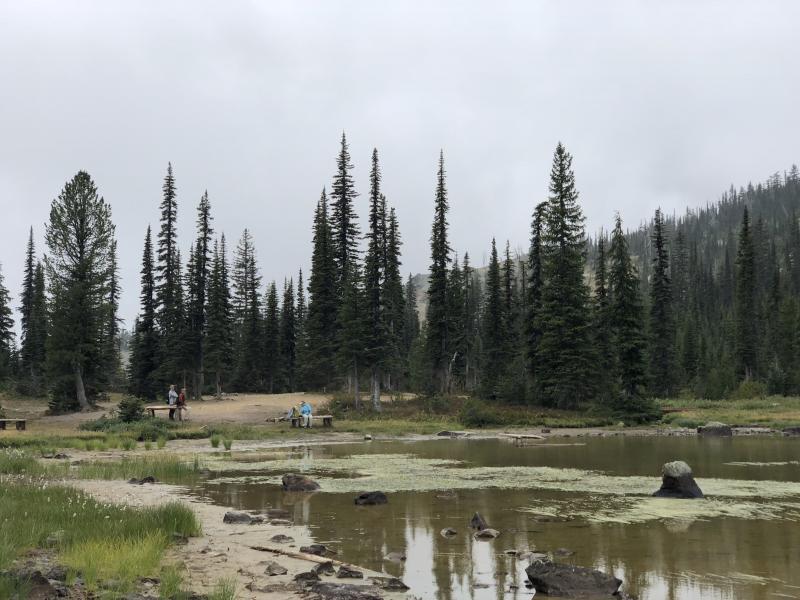 There's a 4x4 parked on the opposite shore - WTF?? Turns out there's a dirt road that goes up from the far side. The path descends along this road for about a mile; it's dusty and horrible.

In fact, the entire path gets both horse and mountain bike traffic (we see a couple of bikers) and as a result has a layer of dust. I take a dim view of both activities, though I have grudging respect for the bikers since the trail has some sketchy spots, like where it's about 12" wide and traverses across a steep hillside. You'd need considerable skill and concentration to ride this.

The trail eventually branches off from the jeep road and goes up 1,000' or so to the east flank of the mountain. We stop for lunch.

Ron and Dave have made sandwiches of last night's lamb. I still have half my turkey sandwich from yesterday; I eat half of that (and eat the remaining quarter on the plane later on). It's remarkable how little I eat while hiking.

The high point is rocky and barren. It's windy; Dave gets cold. There's a large cairn that looks a bit grave-like. 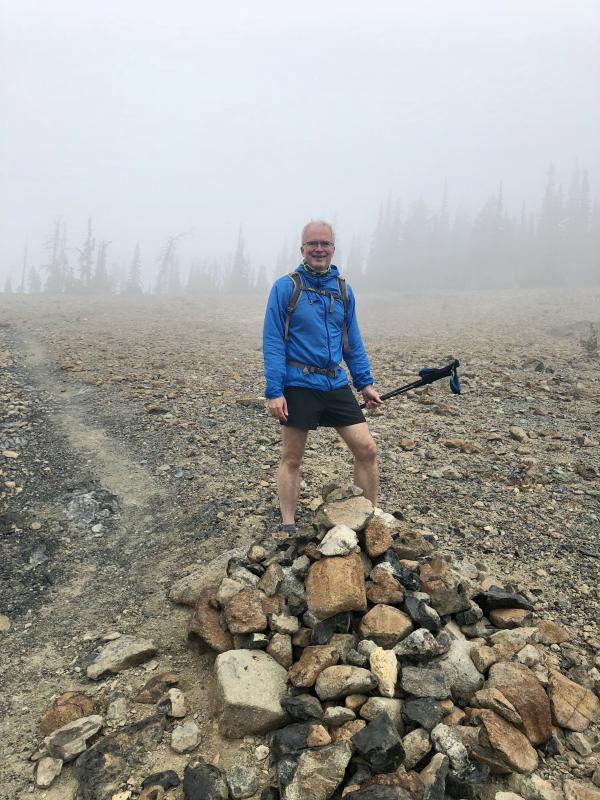 From there the trail is gradual downhill and very mellow. We pass an amazing hillside of yellow/orange flowers. 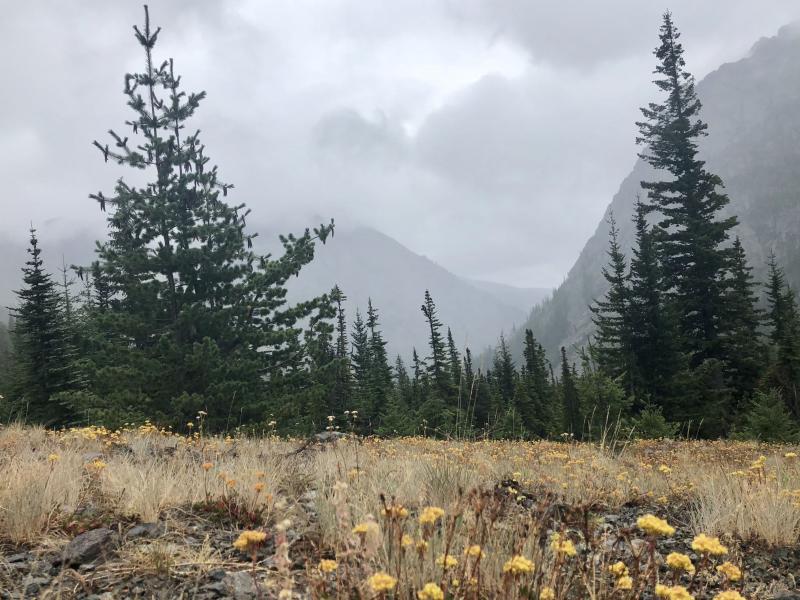 A light rain starts up, but by now we're warm again and it just feels refreshing.

I recite "Casey at the bat". Ron and I discuss dispersion panels, which we think might help the acoustics of my piano space. Ron makes a mind-blowing analogy involving AI-designed circuits, whose details escape me right now.

We get back to the car a bit after 3. I chat with a couple who climbed 2 peaks to the west of Esmeralda.

On the drive home we talk about the geometry of atoms, and why there are neutrons. Then we move on to various family matters.

We stop in Cle Elum for gas. Getting out of car, my legs and feet are very, very sore. Dave recounts passing through here on his semi-transect of Washington, pulling a wheeled cart.

Back at Dave's house, we shower, pack up our stuff and split the remaining salmon curry-burger. Dave tells us about his augmented reality project. The drive to the airport is fast and my return trip is Astroglide.

Ron and Dave are (along with Berg) my oldest and best friends. It's wonderful to spend time with each of them, and when the three of us manage to get together there's a unique synergy, and it's pretty much my favorite thing, period. I wish this visit had been a couple days longer.

But plans are afoot for next summer, with a possible rendezvous in Estes Park. I'm looking forward to that!