Click images for large version and again for full resolution
Noah and I tried Mt. Hoffman last summer and the one before but didn't summit because of thunderstorms. He's very eager to finish the job. I figure we should also visit to Mono Lake and do a trial run on Mt. Conness.

I pack up the Accord and we're on the road at 12:30. It's smooth sailing over Altamont Pass and out into the Central Valley. We stop for lunch at the In-and-Out Burger in Tracy. It suddenly dawns on me that I failed to bring my hiking boots. This means that the Mt. Hoffman hike, at least, will have to be in my leather Jesus sandals.

We stop at the Food Mart in Oakdale and buy necessities: marshmallows, instant oatmeal, chocolate pudding.

We've reserved a tent site at Crane Flat campground. Our site, 314, is nice, but some of the campgrounds are among big boulders that would be good to climb; 211 and 215 in particular. 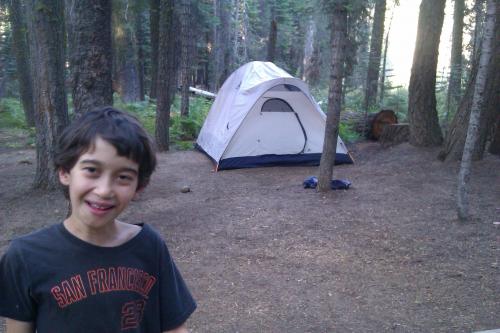 Some of the other sites are occupied by enormous RVs. One of them is running its diesel generator, which fills the otherwise quiet campground with a low roaring noise. The occupants are probably watching TV.

We boil water and have pesto tortellini for dinner.

I try to start a fire using some cardboard and oak firewood. I fail several times, but finally have a small but very hot fire. We get embers and toast a number of marshmallows.

Noah loves camping trips, and is unhappy about their infrequency, He points out that even during the school year we could easily hop in the car after school on Friday, be in the Sierras by evening, do a couple of hikes, and return on Sunday night.

In spite of my comfy memory foam pad and various sleeping pills, I sleep only for a couple of hours, and lie awake from 1 AM onward. At around 4:30 some A-hole noisily breaks camp and rides off on his Harley, letting it idle for about 10 minutes first.

Noah sleeps soundly and gets up around 7. We have instant oatmeal, pack up camp, stop at the Crane Flat gas station for coffee and Fritos (for lunch) and drive to the May Lake trailhead.

The entirety of Yosemite is covered with a layer of smoke haze. There seem to have been a number of small forest fires, including the one I saw last weekend. Everything looks dry, as if a spark could cause a new conflagration. Is this the future of the Sierras?

We're on the trail at 9:24. Five parallel contrails cross the sky. It's slightly warm - we remove T-shirts.

The climb seems fairly easy. The summit block has a few minor rock-climbing moves which pose no problem for Noah. We're on the top at 12:20. 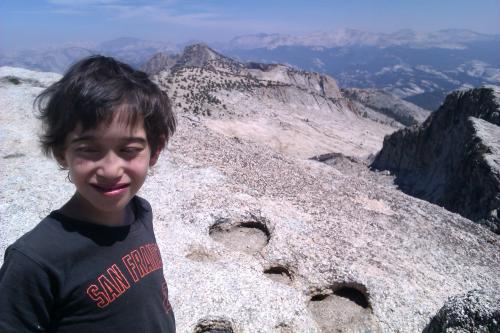 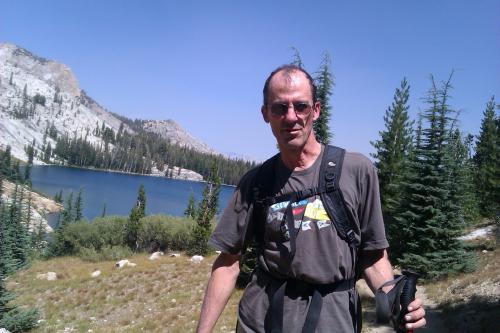 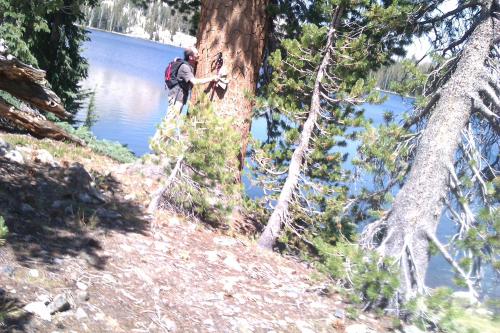 Me and Martha (my favorite tree, a Ponderosa pine)

On the way down we stop at the High Camp dining hall, get a piece of chocolate cake, and say hi to Brian, whom I see there every year. He's being doing it since 2002. I talk with a friend of his, Dustin, who studied geophysics, and ask him about the unusual rocks on the left flank of the mountain.

We're back to the car around 2:30. My feet have survived in the sandals, but some cracked skin is a bit painful. Also my lower back is quite sore.

We stop at Tenaya Lake to soak our feet. 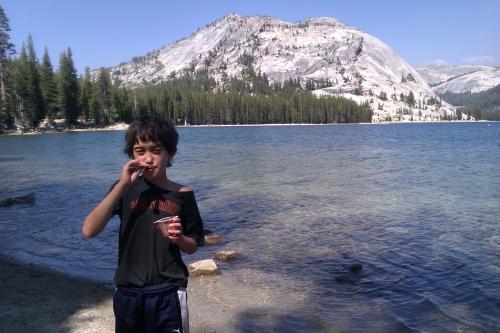 I'm prepared to drive all the way to Mammoth to get hiking boots, but miraculously there's an outdoor store at the Tuolumne Meadows gas station, and they have a pair that fits me perfectly and is only $130.

We stop at Puppy Dome. I consider setting up a top rope, but it would involve several trips up and down the dome, and I'm tired, so instead we walk to the stream around the back and Noah boulders (with a certain amount of complaining about not being able to top rope).

We drive down to Lee Vining, visit the general store, and get playing cards and Ibuprofen.

I make the executive decision to get a motel room, since I really need a good night's sleep. Every place has vacancy. We get a nice room with 2 queen beds, and play rummy.

We share the fried chicken dinner at Nicely's, then drive into the desert to visit the campsite (actually just a clearing in the sagebrush) that we pioneered on our trip with Tara and family. Oddly, someone has put a row of dead branches to block it off. I remove these. We get out the camp chairs, and watch the sun go down and the stars come out. We elect not to make a sagebrush fire, due to the possibility of starting a wildfire. 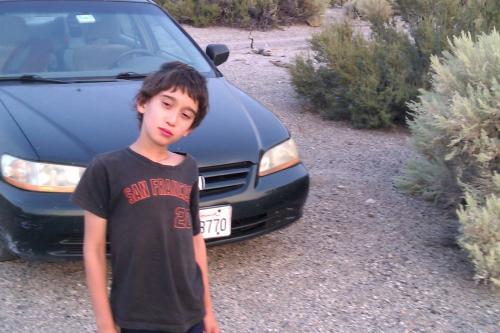 Noah reflecting on the nature of consciousness 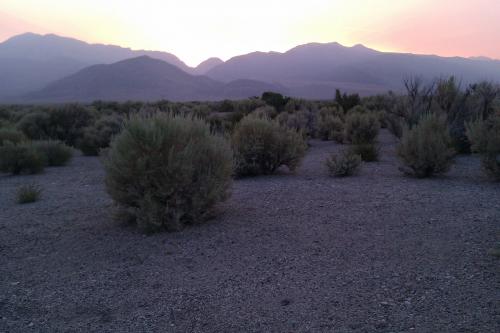 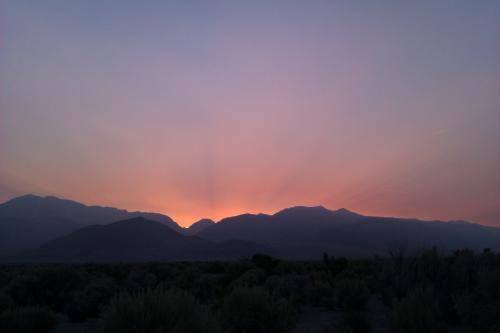 The sunsets at Mono Lake are all different and all great

We had read alarming reports of a plague of "seed bugs" in the eastern Sierra. But we don't see any, either at the campsite or in Lee Vining. There are some bugs, possibly seed bugs, as we drive along 120.

We have breakfast at Mobil station, and head for the Sawmill walk-in campground. We're on the trail at 9:10. The campground is almost deserted - unusual.

Noah is tired and slow at first; he says he didn't sleep well, is tired from yesterday's hike. Plus we're at 10,000'.

We head up the valley to the right of Alpine Lake, which leads to the base of a 200' cliff. We proceed up the gully where a stream sometimes runs down (no water on this day). There's one place where you have to do a V0 move up a 8' rise; Noah enjoys this. In fact he's revitalized by the adrenaline of doing it.

We reach the plateau above Alpine Lake and stop for lunch. We ascend the steep slope above the plateau; trying to stick to the grassy bands, avoiding the rocky parts where Todd fell and broke his hand a few years back. 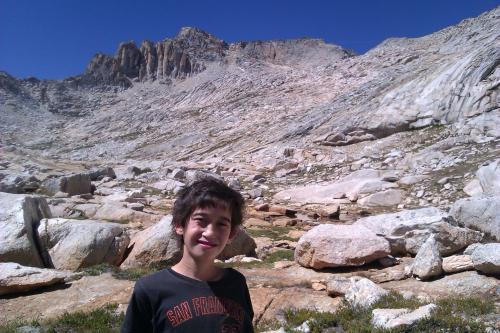 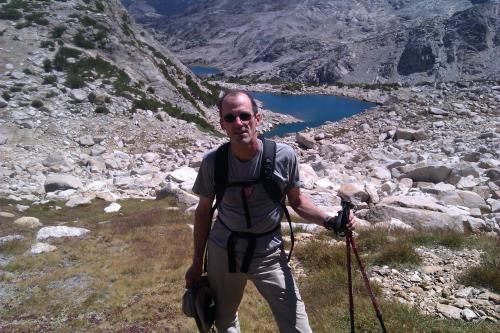 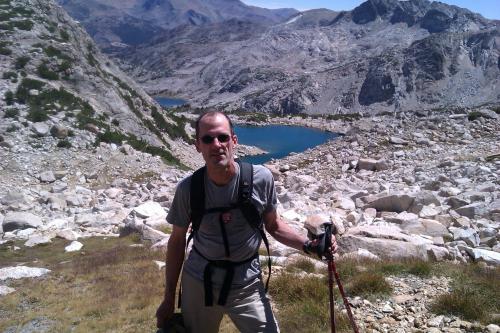 The grass gives out and we scramble across large boulders, coming out at the mini-lake below the ridge. It's 1:00. Our nominal turnaround time is 2:00, but the summit is more than an hour away, and I'm getting tired, so I give an executive order for turnaround. Noah agrees, thought an hour later he's regretting not summiting, and in fact gets pretty whiny about it. 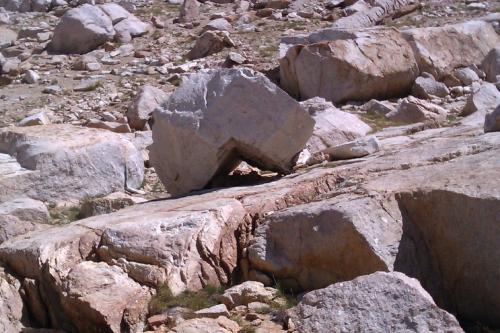 Marmot is under rock 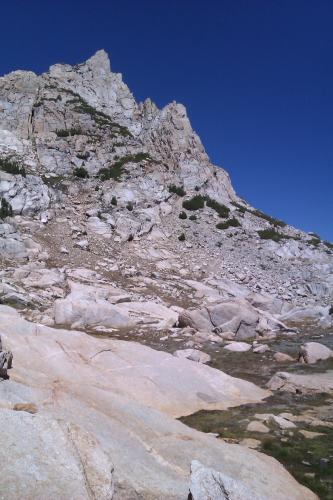 False summit that Rob and I explored once 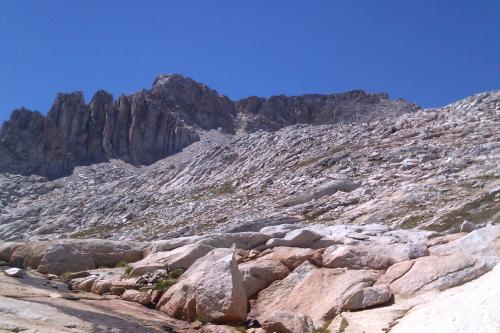 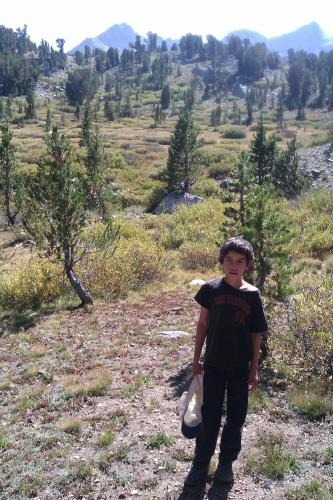 Noah was cranky because of not summiting

We reach the car at 4 PM, and soak our feet in sawmill creek next to the highway. I finish the egg sandwich and coffee left over from breakfast.

The 5 hour drive home looms in front of us. We stop at Lembert Dome and play several hands of Rummy.

In the windy roads leading to Groveland, Noah becomes car-sick. He doesn't ralph, but we have to pull over and sit a couple of times.

We stop at the Wendy's in Oakdale, where Noah has the 10-piece nuggets. We play some Vermicelli and arrive Berkeley 10 PM.

Injury report: none. My back soreness went away, possibly because of the new boots, which are well cushioned; also my feet are not sore.