Rob Vaterlaus had unfinished business on Mt. Conness; last summer he climbed within a quarter mile of the top and turned around because of leg problems. We returned with Justin this past June, but there was impassable snow above 11,000'.

Time has passed, the snow has melted, so we decide to give it another try. To amortize the drive we decide to continue on to Yosemite valley and, after a day of rest, hike to the top of Half Dome. Dave Rockower, a hiker/climber friend, signs on to the trip, and Lynne and her friend Shannon arrange to travel up separately and camp with us, but not do the hikes.

Rob Vaterlaus and Dave R. meet at my house noon Monday 9/17. We pack Rob's car and drive to our usual campsite in the BLM land south of Mono Lake. The weather is perfect and the air is scented by sagebrush. We cook dinner, have a modest campfire, and retire. I toss and turn all night, sleeping only an hour.

The next morning we're up at 7 AM and at the Saddlebag Lake trailhead at 8:30 AM. We quickly reach the Carnegie Institute Experimental Station, pausing for several minutes to survey the terrain and plan our route. We could go via Alpine Lake, like last time. Or we could try to reach the area above Alpine Lake via a gully in the cliffs at the area's east end. We decide on the latter, and it works out perfectly: the gully, though steep, has a use trail along its grass-lined stream. 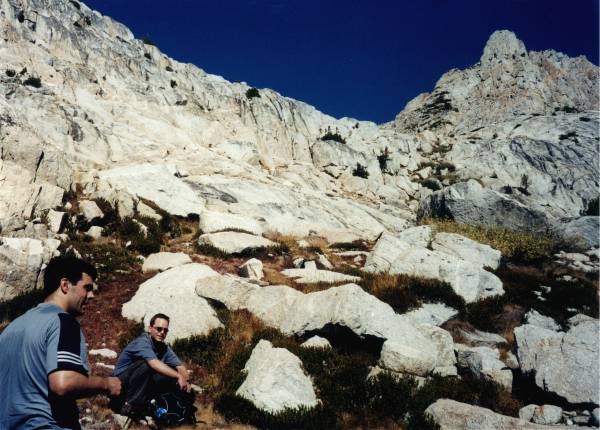 The gully is the green section in the cliffs just above us.
A couple of minor class 3 mantle moves put us on the plateau, exactly as we had envisioned. Such navigational success is rare for Rob and me.

We head diagonally up the slope, aiming for a knoll at the west end of the ridge. 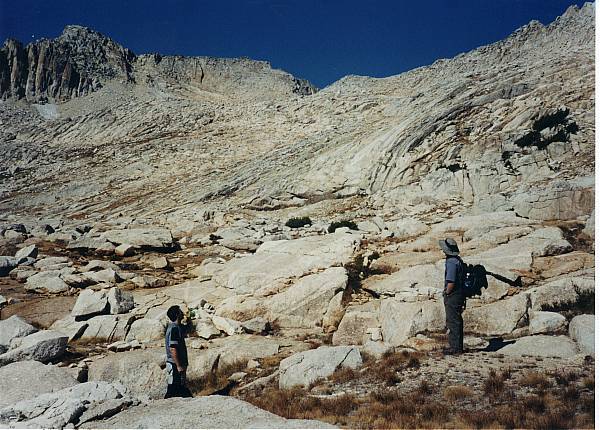 The slope above Alpine Lake. 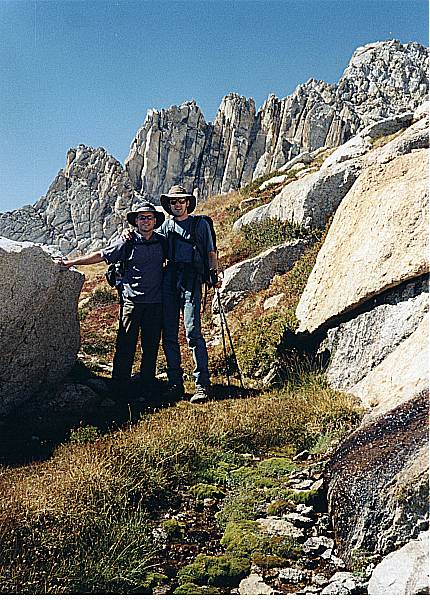 Halfway up the slope.
Reaching a tiny lake at the upper part of the slope, we go around it to the left (South), which takes us over some large boulders, but we soon arrive at the knoll.

The slope leading from the knoll to the summit plateau looks near-vertical from below, but actually it's an easy staircase of rocks interspersed with sandy dirt. The key is to follow the dirt. At this point the altitude is getting up there - 12,000' or so - and Dave R. has some dizzy spells.

We emerge on the summit plateau and note some rather suggestive rocks by which we can locate our path on the descent. The summit block is as I remember it: a huge sinister black castle, studded with turrets and buttresses, surrounded by precipitous cliffs, accessible only by a narrow winding arete. 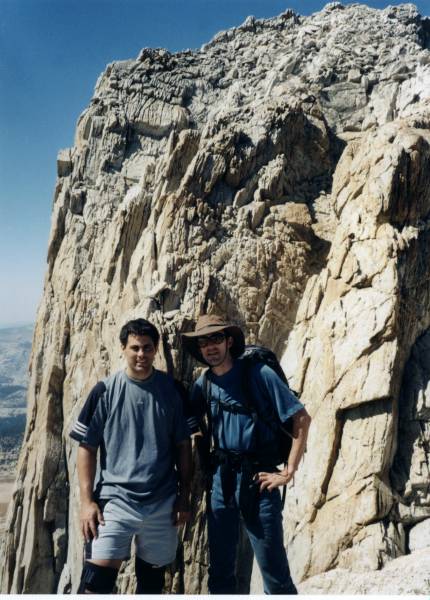 The summit block. One step back and we're dead.

I try to whip Rob and Dave R. into a state of terror about the arete, but once we're actually on it they realize it's no big deal; you just have to be very careful. 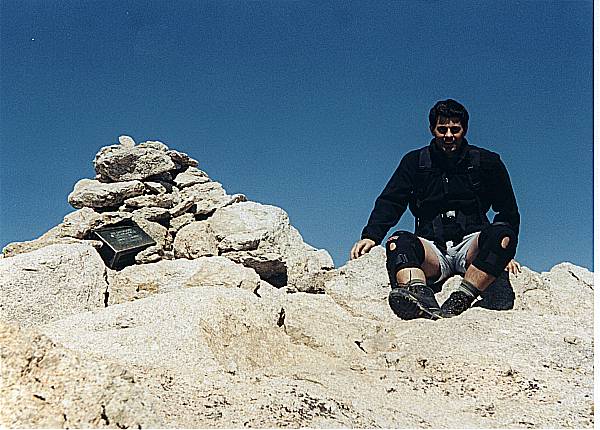 Rob savors his moment of triumph.
Soon we all sit on top, enjoying a warm and nearly calm day, so quiet we can hear melt-water trickling under the Conness glacier a thousand feet below us. The last couple of entries in the register refer to the WTC attack. 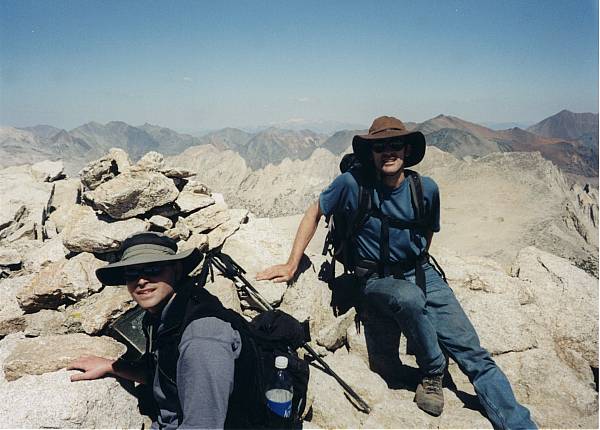 My stance is awkward because there's a 500' cliff to my left.

We descend, this time taking the uphill dirt slope around the small lake. On the far side of the lake is a blue one-man tent. The fly has blown off and lies fifty feet away. Outside the tent is a bottle of sunscreen in a ziploc bag. Dave R. approaches the tent, and through its mesh sides sees a bag of food (rotting, several days old) and a sleeping bag. He reaches into the tent - the bag is empty.

We discuss what we're seeing. The mostly likely interpretation, unfortunately, is that a solo climber came here and was killed on one of the nearby cliffs.

We return by the same route, though it seems somewhat longer this time, especially the dreaded last uphill 1/4 mile. We're at the car by 4 PM.

We visit the small fisherman's store by Saddlebag lake and discuss the blue tent with the women working there, who refer us to the ranger station in Lee Vining. We drive to Lee Vining and have milk shakes at Mono Cone. Dave R. reports the blue tent to a disinterested park service worker.

Injury report: I'm fine, though I had some outer right knee pain on the descent. Dave R. and Rob have a variety of blisters, and Rob's right knee has contusions from the brace he wore.

We return to camp and relax. The womenfolk arrive a bit behind schedule, but they bring lots of steak and corn. We dig a barbecue pit. That night's fire is a bit larger; I sleep very well.

Next morning we break camp, have a leisurely stop at the Lee Vining Mobil station, and proceed to Puppy Dome. Dave R. and I set up a top-rope anchor at the right bolt on the top edge, and we take turns on the 65 degree slab. Then Dave R. moves the rope to the last tree on the halfway ledge; this climb consists of a minor overhang start, 15 feet of dihedral, and 25 feet of slab with periodic horizontal grooves requiring a repeated mantle move.

Everyone has their turn. I reclimb the route, clean up the anchor, and wait at the car while the others swim in the nearby stream, which has a beautifully clear and deep pool.

We drive to Yosemite valley, arriving around 5 PM. The scenery, as always, is amazing. Half Dome looms over the head of the valley, looking far too high for us tiny humans to ever climb.

Our campsite in Upper Pines is OK, but the density of campers, the prevalence of generator-powered motor homes, and the smoke from a thousand campfires give us claustrophobia after the wide-open Mono site. We buy food at the Yosemite Village store, and attempt to eat barbecued chicken while being swarmed by yellowjackets. Dave R. and Rob buy 'gourmet sandwiches' to eat atop Half Dome.

I retire early and sleep soundly while the others sit around the fire ring and have a lengthy chat with a lispy ranger who cautions them about bears and lets Lynne try on his hat.

Rob and Dave R. get up around 6:30 and prepare efficiently for the hike. I get up and make coffee, tea and oatmeal. Rob and I are a little nervous about what lies ahead. We drive to the trailhead (4,035') and are hiking at 8:00.

We power up the initial 3 miles. The trail is mostly paved with asphalt, which is unpleasant under my trekking poles. We take the non-Mist branch of the trail, longer but more gradual. Dave R. seems to have rocket fuel in his Gatorade bottle - Rob and I spend the day trying to keep up with him. We briefly chat in Spanish with two Mexican men and a woman in a lavender velour jumpsuit. One of the men is carrying a 1-gallon plastic jug of water. 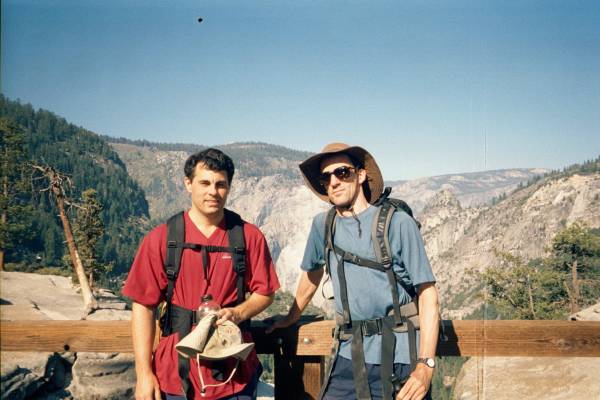 The bridge over Nevada Fall.
The next stretch is mostly level, traversing behind Half Dome. 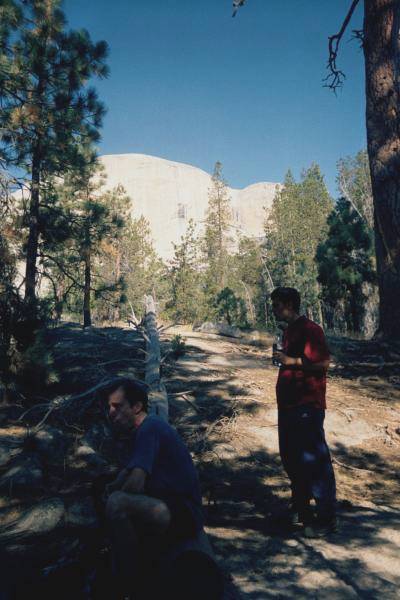 Water break behind Half Dome.
The trail has been ground into a sandpit by horse hooves; we hike off to the side for better footing. Then the trail gradually gets steeper, and turns to fine powdery dirt, as it wraps around to the east side of Half Dome.

We're all conscious of passing and being passed. One particularly weedy-looking guy carrying lots of camera equipment passes us while we're stopped; then we pass him while he's stopped and so forth. Finally I break down and chat with him a bit - he's a Brit, 3 months into a year-long walkabout.

Finally the trail reaches the base of Half Dome. A sign prohibits passage if thunderclouds are visible. There are a few hundred yards of steep granite steps, then a false summit, a slight descent, and the upper dome with its steel-cable walkway. 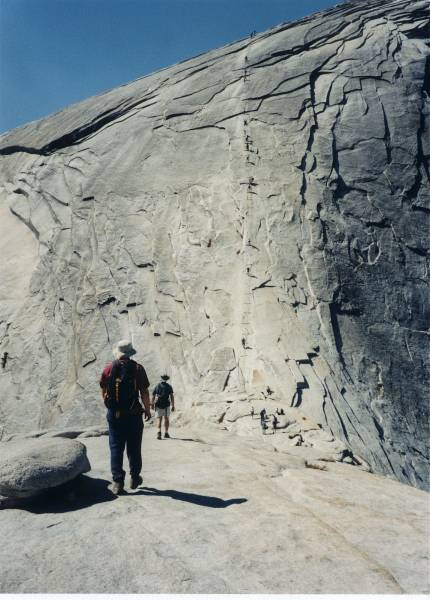 From the false summit, looking towards cable walkway.
Several dozen people are either on the walkway or at its base. There's an uproar: a woman, halfway up the cables, has lost her hat. It's sitting on the steep smooth granite, 20' to the left of the cables. She's crawled outside the cables and is attempting to retrieve it. One slip and she's dead. People are yelling at her to get back. A gust of wind blows the hat down to a shallower slope, closer to the cables; she eventually gets it. I start up the cables and pass her: a maniacal-looking young Japanese woman.

We reach the top, walk to the highest point (8,836'), and have our lunch. The sandwiches are, as I feared, a bitter disappointment. More yellowjackets, even here! I eat beef jerky and dried mango. The Brit sits nearby.

We start down without bothering to join the crowds looking over the edge. I'm feeling good and my knees are OK for now. We reach the dirt trail. My trekking poles, like crutches, let me go fast on this slope and Dave R. and I move at a semi-run for a while.

Improbably, we meet the Mexicans coming up the trail. The man is dangling the water jug, now nearly empty, from his index finger.

A caravan of pack horses passes us, raising a huge cloud of dust. Then we're stuck behind them as they crawl down some switchbacks.

We reach the flat part. My back is getting a little tweaked. I use my poles to keep my hips and back aligned. The actual walking is effortless - just a continuous falling foward.

We reach the top of Nevada Falls. We decide to take the Mist Trail down. This is a nightmare - the rocks are flat and slippery, the steps absurdly steep and too shallow for my big feet. My right knee starts to hurt ominously. But eventually we're back on the easier paved trail. We reach a drinking fountain, and although I still have water I realize just how dehydrated I am, and drink a lot. 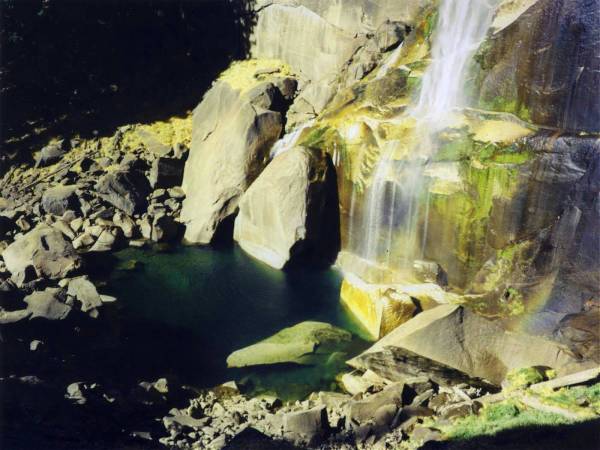 The base of Nevada falls. Click here for hi-res version.

We reach the parking lot at 4:30. The womenfolk have left a sprig of pine needles under the wiper. We drive to Curry Village and shower (I unknowingly cut in front of a bunch of punk kids). Then we meet Lynne and Shannon at the bar of the Ahwahnee, have a quick drink, and head back home (stopping for Mexican food at the "T'Kila's" in Oakdale, which obligingly stays open late for us).