Rob V. and I drive to the secret campsite at Mono lake (whose location I cannot divulge). Michelle Y., driving up from LA, arrives soon thereafter. Magnificent clouds float above the magnificent mountains, and the sea of sagebrush scents the air, which is warm and completely calm. The tensions of the city melt away.

Michelle has brought two thick steaks, and we cook up one of them along with some pasta and sauce, red wine, and cantaloupe for dessert. Soon the stars come out (including a meteorite or two). Because of the still air, the stars are frozen, untwinkling diamonds. We have a brief campfire. Michelle has brought a bag of firewood, which we leave for the next campers (if any).

Rob and I don't sleep, as usual. We have coffee and instant oatmeal, get sandwiches at the Mobil station, and drive to the Sawmill campground. I recognize the Third Pillar of Dana for the first time.

It's a perfect day: calm, sunny, neither cool nor warm. The hike up Conness is uneventful. We all feel the altitude a bit, and keep a moderate pace. We cross paths repeatedly with a group of three men on the last leg of a Sierra high country trip, and after summiting are going to drop down the glacier side of the east ridge and continue to Matterhorn Peak. 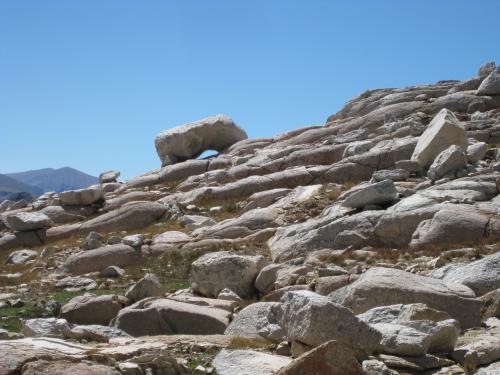 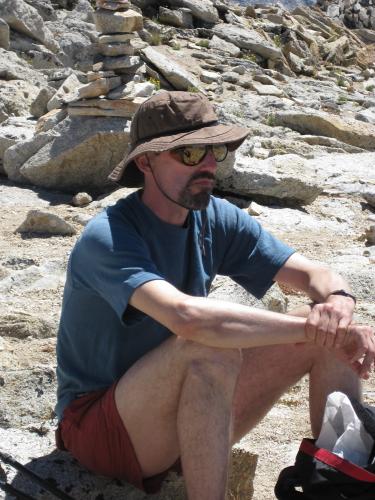 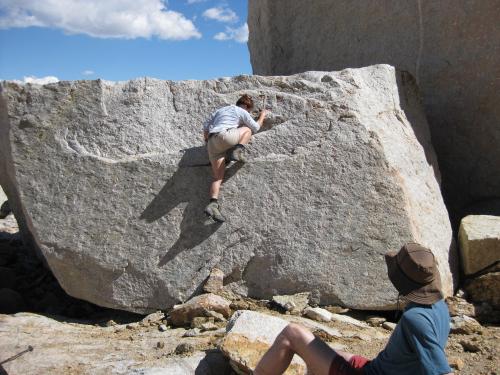 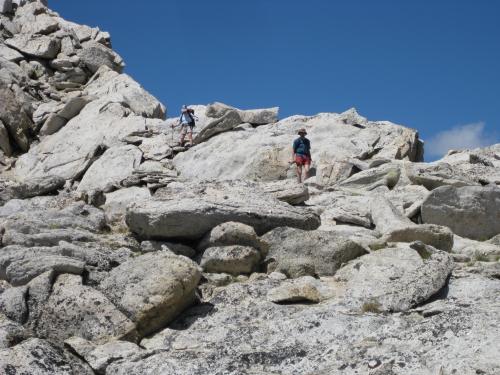 West side of Conness 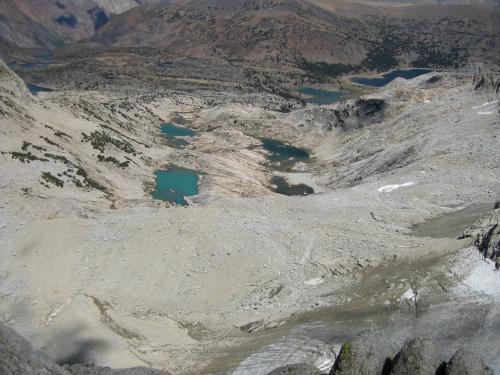 At the summit, another hiker identifies the peaks on the horizon: Ritter and Banner together on the left, and Lyell in the middle with its big glacier. Back in the Sawmill campground, I chat with an old mountain goat. I tell him about the empty tent on Conness a few years ago, and he asks where our next adventure is going to be, and recommends Banner/Ritter.

I am tired but nothing hurts. I had a minor issue with nerve pain in my right foot when stepping on sharp rocks, probably because I was wearing approach shoes rather than hiking boots.

I become conscious of my hydration: I drank a quart of water on the trail but haven't urinated all day. So I decide to drink until I do. I have some of Rob's gatorade, then 4 glasses of water at the Mobile station (washing down a plate of baby-back ribs, excellent) then another quart back at camp. In spite of all this I don't piss until the next morning. However, I feel great, no cramps at night and no soreness the next morning. There's a lesson here for me.

Dinner at the Mobil station lives up to its billing. Rob and Michelle have the Seared Tuna Sashimi Salad with a glass of white. Michelle regales us with tales of toil and tragedy on McKinley. I recognize a climber (Tim) from Ironworks, and chat with him, and also with a couple from Oakland who have flown up in a light plane: there's a landing strip along 395 just south of Lee Vining.

That night Rob and I both sleep better (i.e. 4 hours rather than zero). We have excellent breakfasts at the Mobil station (sorry if this is sounding like an ad) and drive to the Glen Aulin trailhed.

About a mile in, a line of horses merges in front of us, and we race to get ahead of them. We become aware of the unpleasant nature of the trail (deep sand, horse poop). Flustered, we briefly lose the trail and when we find it again the horses are in front of us. I turn to Rob and say 'This sucks - let's go back'. He was thinking the same thing.

So we go back and decide to hike to Lake Elizabeth instead. It takes about an hour for us to locate the trail (it's at the back of the Tuolumne campground). By that time I am full of anger-fueled energy, and almost sprint up the 2.2 mile trail. I feel very good and energetic. 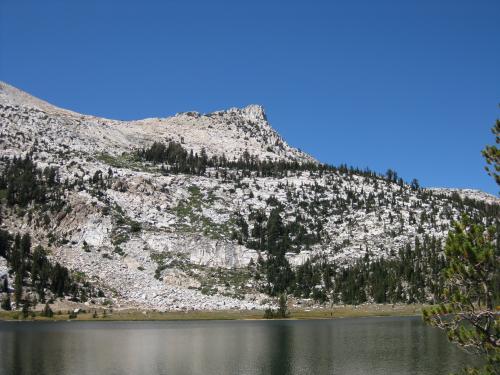 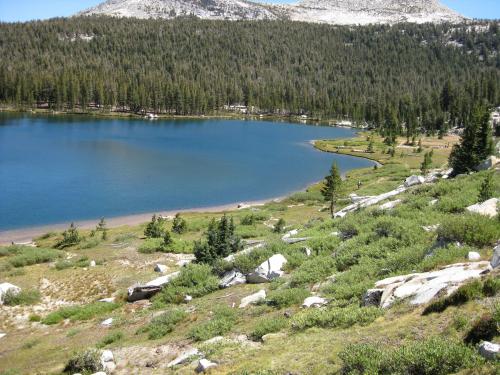 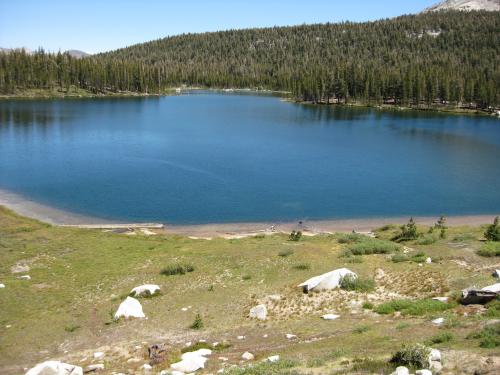 We walk around the lake and have lunch. Unicorn Peak looms over the far side of the lake, but it's too far away to consider. Instead, I identify a rock tower halfway up the slope to the left of the lake, and scramble towards it. The slope becomes quite steep, and I find myself yarding on brush and being very careful to avoid a disastrous tumble. I get what I was after: a good dose of head-clearing focus and fear. After about 30 min I reach the level of the tower, but getting to the top of it would require some V0+ moves with major commitment, so I wisely decide to bail.

We get back to the Tuolumne store at 3 PM, have something to drink, discuss possible future trips, and decide to get an early start on our return trips. Rob and I have a quick and pleasant trip back, and get home around 7:30. A short but very sweet trip.