A couple of years ago I was in Yosemite with Dave Altman, looking up at the Big Walls. Dave was enumerating countless climbing routes: their ratings, who put them up, that person's graduate degrees, etc. I noticed an obvious diagonal line going up a giant wall on the south side of the valley (behind Curry Village), leading to a gully that in turn led to the top. I asked Dave if one could get up that way. He said yes, that it was called the Ledge Trail, that it had once been a sanctioned trail but had been closed for various reasons (such as difficulty and danger) and that someone had jokingly put a 'trail closed' sign more or less halfway up, i.e. at a point where turning around wasn't realistic.

He also said that while going up the diagonal ramp, you're underneath a concave overhanging cliff that acts as an acoustic mirror, collecting the sounds from the entire valley and focusing them on your left ear, sounding like the drone of a huge beehive.

So of course I needed to check it out. I recruited Rob Vaterlaus, who is willing to try anything and never complains no matter how bad things get. We did it as a 24-hour blitz, driving down Wednesday night and returning Thursday.

We arrive at the Muir Lodge in Midpines around 10:30 PM. The caretaker, a short muscular guy with long hair, but no longer young, is as drunk as one can be and still function. Though he can barely walk, he insists on showing us our room (Perhaps he's worried that it contains artifacts of his 'partying'?). Note to self: The Muir Lodge is marginal (poor beds, only 1 TV channel) and not worth the $69.

I ask the Party Animal where one can get beer, and he mumbles something about 'The Bug' up the road. We investigate, and discover the Yosemite Bug, a large complex with accommodations ranging from hostel to cabins, and a cafe that has several beers on tap and is open until 11 PM. There are sofas inside and a nice deck outside, and lots of young Europeans hanging out. We have a pint of ale. The whole thing exudes incredibly good vibes, and I feel like Frodo arriving at that Elvish place, Tralfamador or whatever.

Next morning (after an excellent breakfast at The Bug) we drive to the valley. I'm not feeling good - mild headache, raspy throat, body aches. We park at Curry Village around 9:30. Looking up at the cliff, we can see the ledge, and a waterfall (Staircase Falls) towards its upper end.

We walk through Curry Village to the back of the cabin area and head uphill, following a very faint trail. We end up in a steep gully that is both irritating and dangerous: lots of loose dirt and easily-dislodged rocks. Right off the bat we're having to use full-body strength, making 3rd-class moves that require total contentration. I'm sweating and stressed out. Not what I had in mind. 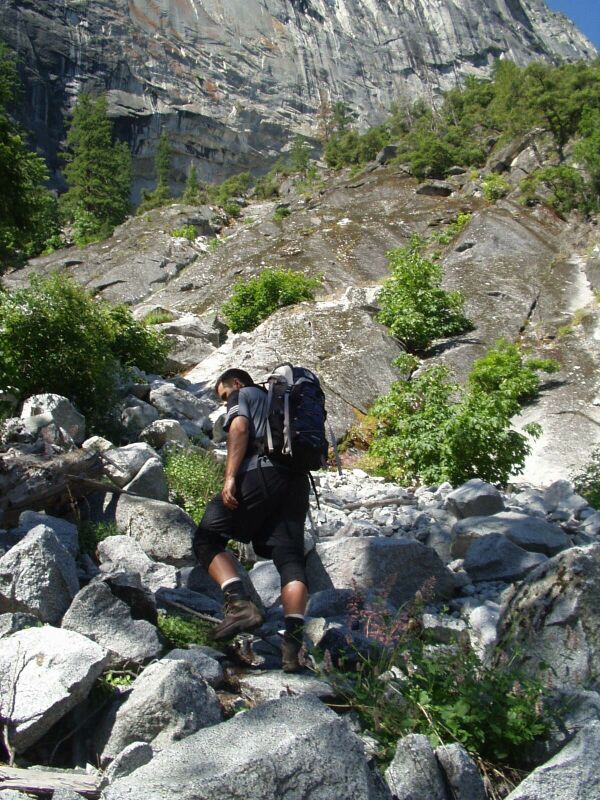 Putting up a brave front

(It turns out, from reading other trip reports, that we probably started too far right, though I'm not sure it makes much difference).

We struggle up to the 'ledge', expecting to find some kind of maintained trail. Instead, it's more of the same: 3rd-class scrambling, down on all fours much of the time, Occasional stretches of bare granite, but steep enough that you have to be very careful: Vibram boots slip unless you pick the right place to step. 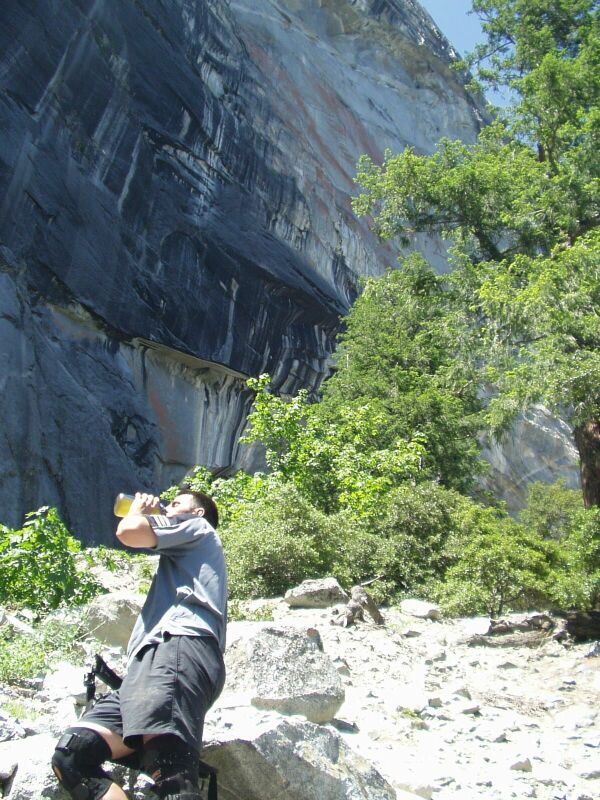 The route is marked by occasional orange paint on rocks. However, this paint clearly hasn't been maintained in a few years, and there are sections where rockfall, sedimentation, water etc. have rearranged everything, and no paint marks are visible. This happens especially at critical junctures. 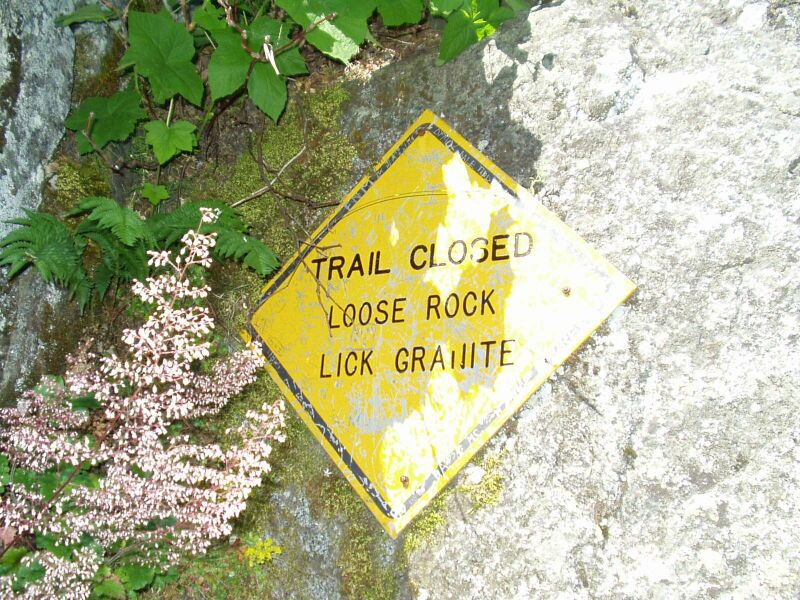 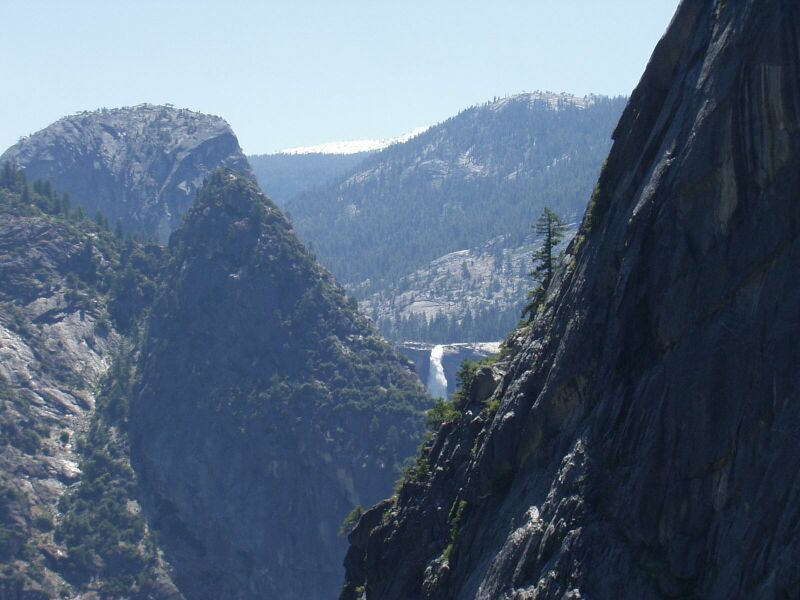 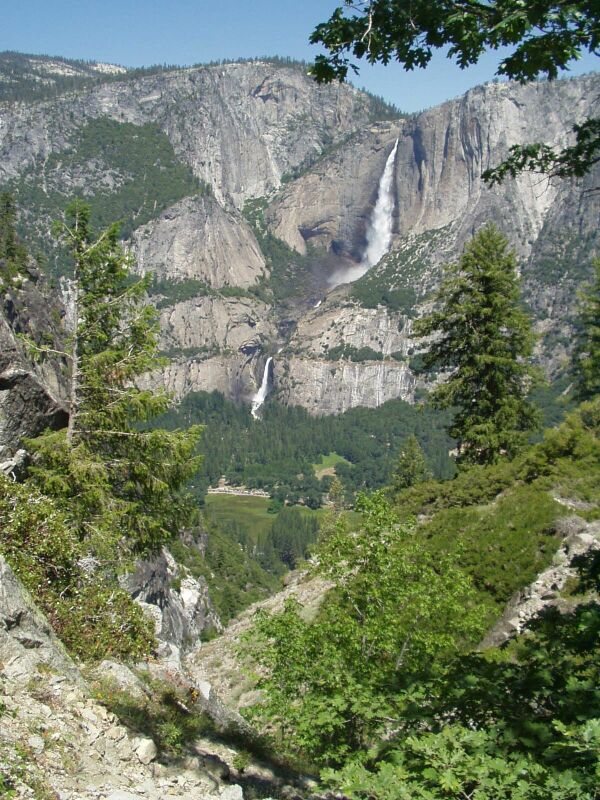 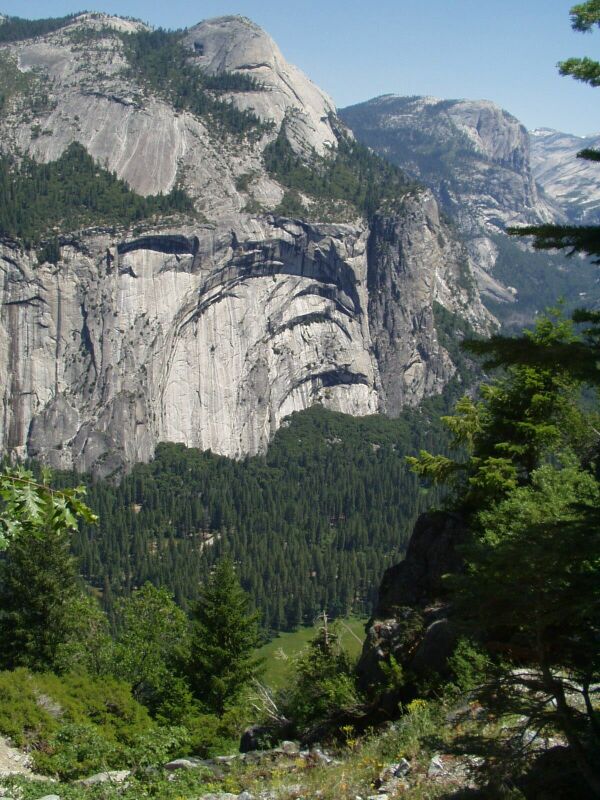 Soon we come to Staircase falls and cross the stream. From this point on the trail follows the stream all the way to the top. There are several points where the route is not clear; always pick the option that stays close to the stream.
click image for hi-res version

We go up a few hundred feet to a pair of giant pines next to the trail, and rest. A little above that the trail crosses back to the left side of the stream. The paint marks vanish. I go a up a gully to the left, which it turns out is off-route; Rob picks up the paint marks again, leading back to the stream, and crossing to its right again.

At this point the vegetation around the stream changes to a dense jungle-ish mixture of ferns and brush. The trail goes right through this (there's no alternative - the gully is steep-walled and narrow). The rocks are indeed slippery; as annoying as the brush is, at least it provides something to grab. Rob does an amazingly flawless job of navigating, tracking paint marks almost hidden by slime and foliage. This is fortunate because I'm at the point of fatigue where I can't think and don't want to make decisions. 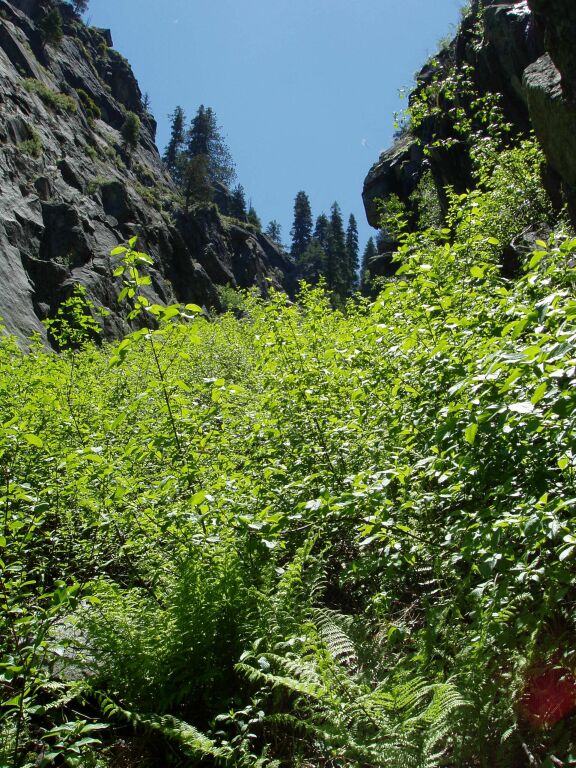 The trail goes through the middle of this stuff

Finally the Trail from Hell emerges into a pleasant pine forest, and we hit the 4 Mile Trail, which is a superhighway by comparison. We follow this a few hundred yards to Glacier Point, which is aswarm with corpulent middle Americans stuffing their pieholes. I join in, buying a Triple Chocolate drumstick (but tossing it after a few bites). It's a little past 1:00, and we've gained about 3,500'. I feel like crap, and lie down with eyes closed for about 20 minutes. 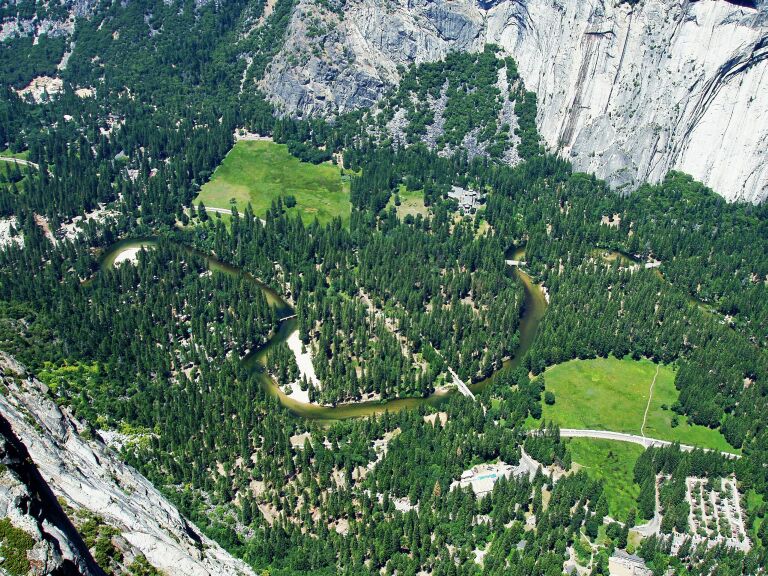 Looking down from Glacier Point; compare with earlier picture 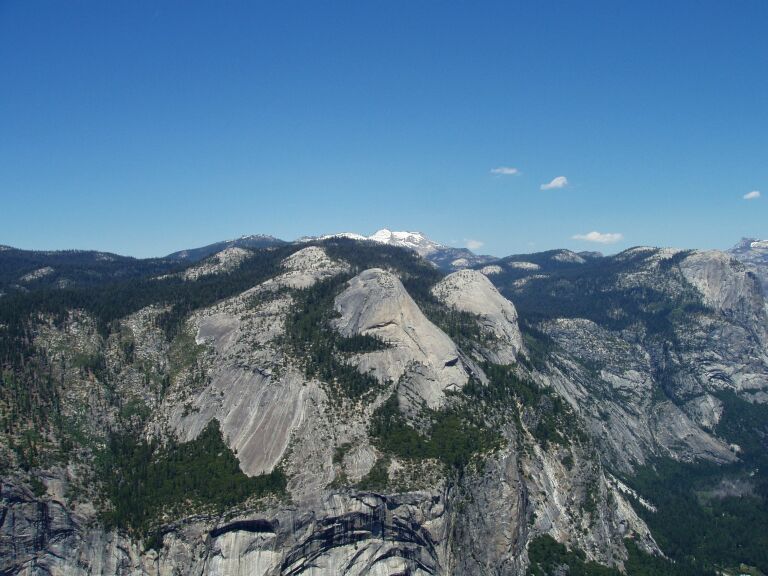 At 2 PM we head down the 4 Mile Trail, which has a shallow grade and a zillion switchbacks. 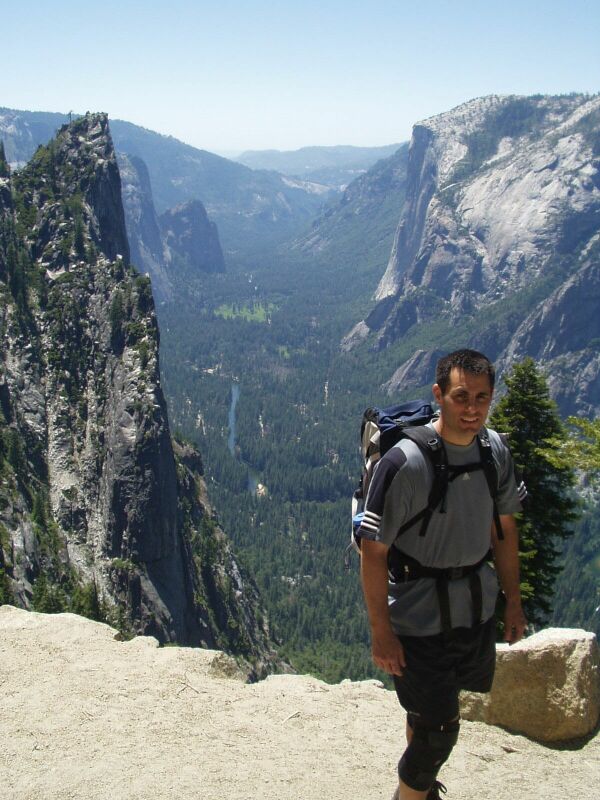 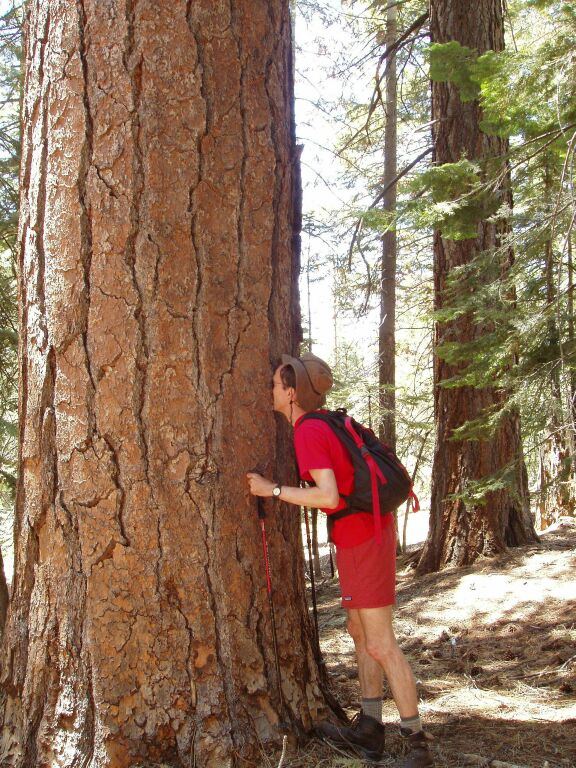 I pause to sniff a Ponderosa Pine
We reach the road around 4 PM. The trailhead is 2-3 miles down the road from Curry Village. We expect to find a shuttle bus but none is evident. I gear up for a trudge, but Rob has a better idea: cross the valley to Yosemite Village (only a few hundred yards) and assume the bus stops there. It does, and soon we're back at our car.

As Rob takes off his hiking boots he discovers that both of his insoles are in the left boot. This explains why the bottom of his right foot hurts so bad. Also, getting into the car, I leave my hiking poles on the roof, and later they fall off and are lost.

We're back in the Bay Area arrive shortly after 9 PM.

Injury report: slightly strained knee tendon from slipping on a rock. Next day everything is better, in fact my legs feel bouncier than normal. The next day Rob and I climb and I do a 12A, albeit with some hangs. 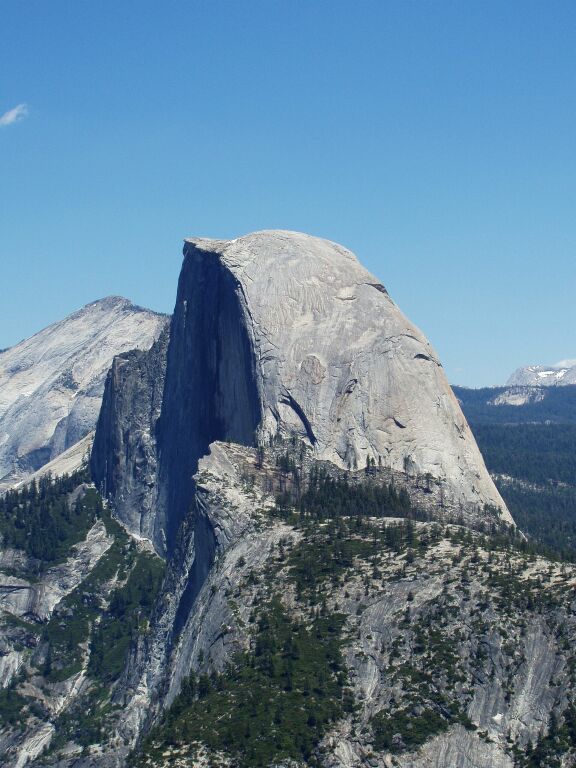 Death Slabs lead up to base of cliff 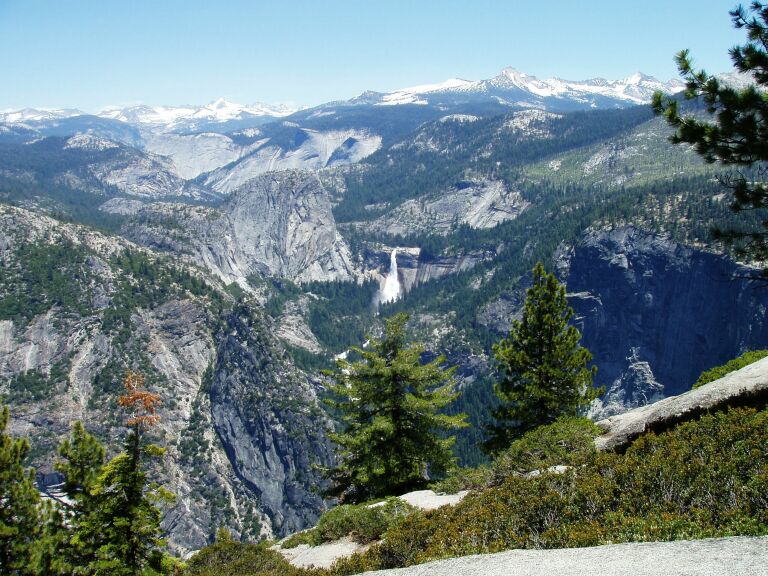 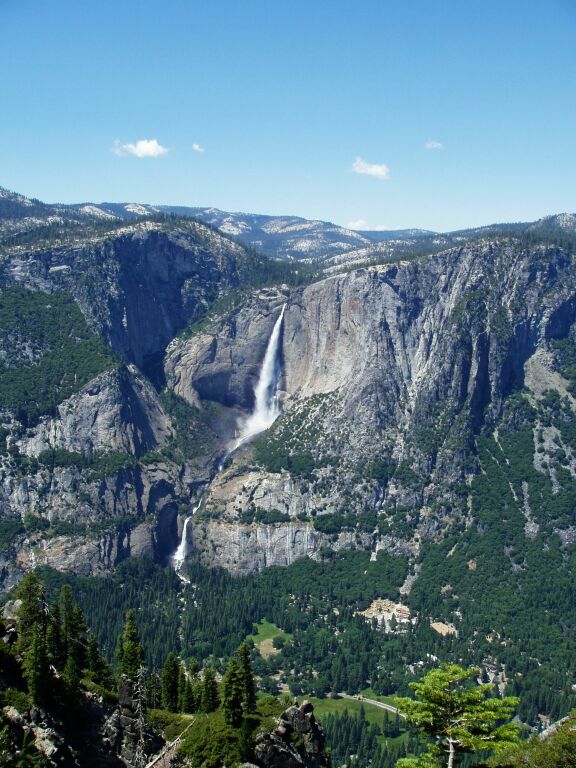