When I bought my house in 1989 there was a large avocado tree, and a lawn, in the back yard. The tree shed leaves year-round at a prodigious rate. I raked only occasionally, and eventually the grass died out. The tree grew larger every year, spreading beyond both sides of my property. The back yard became a dark, gloomy place; I avoided it.

This past winter I made the decision: the tree must die. I had an arborist cut it down, saving the wood for firewood (there were several tons).

I located David Turner, a landscape architect who specializes in rocks and bizarre desert plants. He drew up a plan with the following elements:

It also became clear that 1) the back deck had to be replaced (bad design and rot) and 2) both the back and left fences were rotting and falling over: 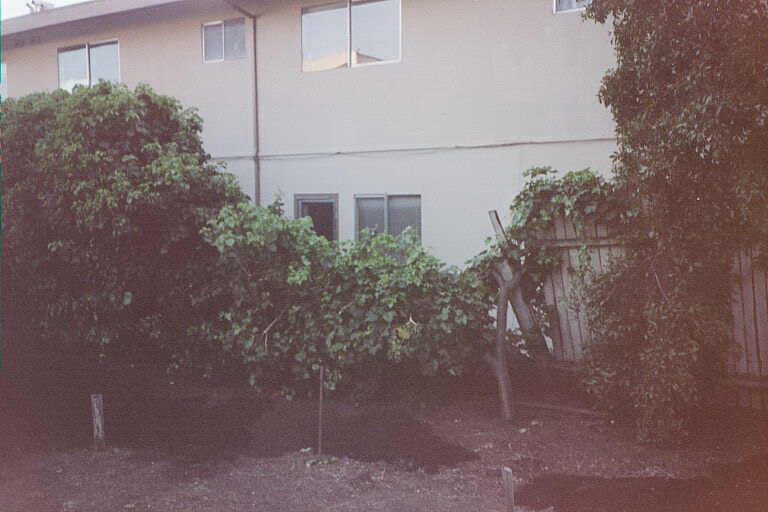 I had a new deck built, and negotiated with the neighbors to have new redwood fences built (the ivy is now gone). Also, I bought a chain saw and (with Lynne's help) cut down and removed two smaller trees.

Here's a picture of David Turner working in the early stages. The new back fence is in place. Concrete rubble visible in back. The pit at right (with rake) is where the avocado stump was (Dave ground it out a bit). 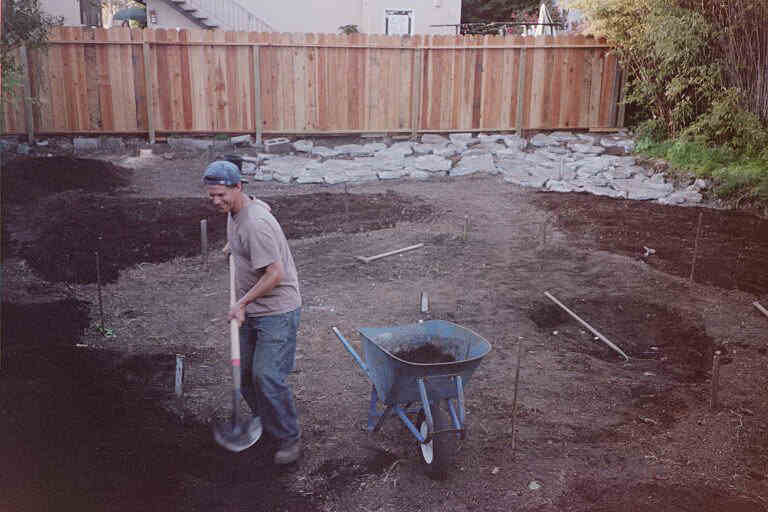 The pile of firewood was a sore point. I gave away several truckloads to my Dad, but that barely made a dent. As work progressed, I had to move it by hand several times. 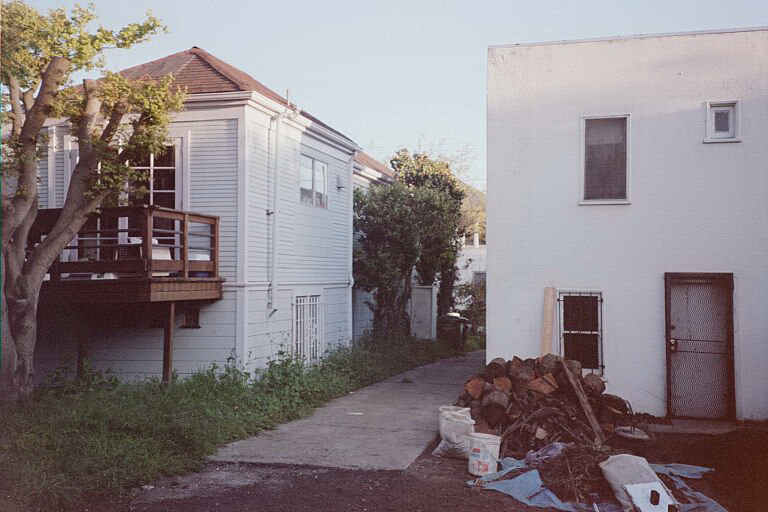 Things took shape, and Dave put in some of the plants, which were small and scraggly at first: 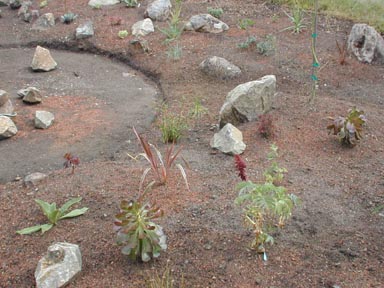 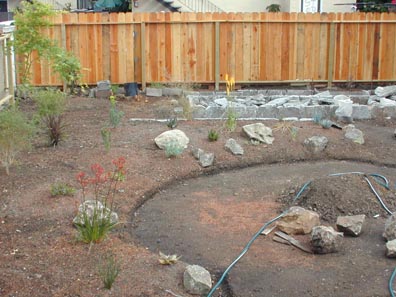 The project was done by mid-May, and I held the 1-year anniversary SETI@home party there, which was a big success.

With the help of Jon Seltzer, I planted the vegetable bed with pumpkins, sunflowers, cabbage, and green onions.

Now (mid-June 2000) the plants are filling in nicely. In the background is the yard of my neighbor on the right; there's no fence, which makes both yards seem bigger. 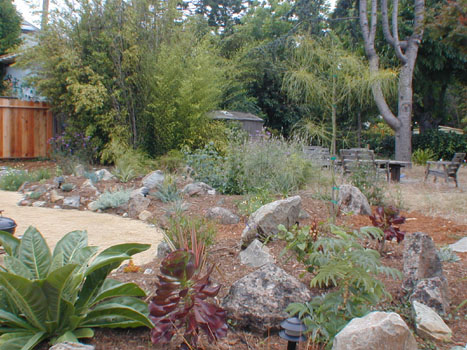 I commissioned a redwood-burl bench from a local artisan, and put in some low-voltage outdoor lighting, which looks stunning at night. 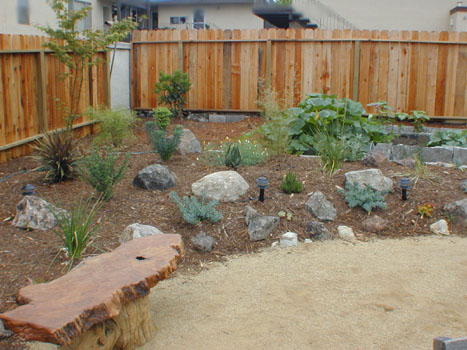 In the back, you can see that the vegetables, especially the pumpkins, are growing well. 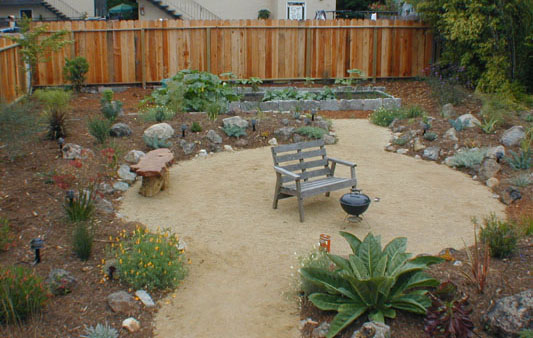 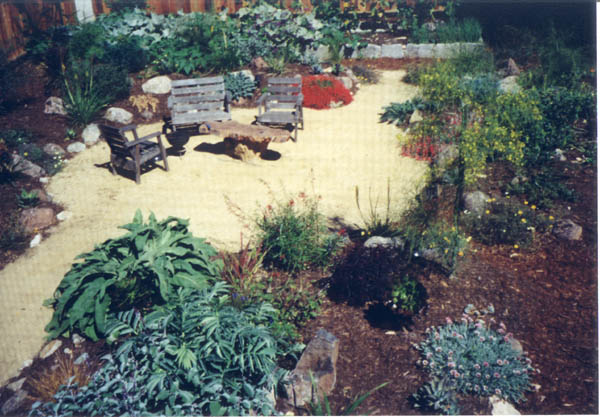 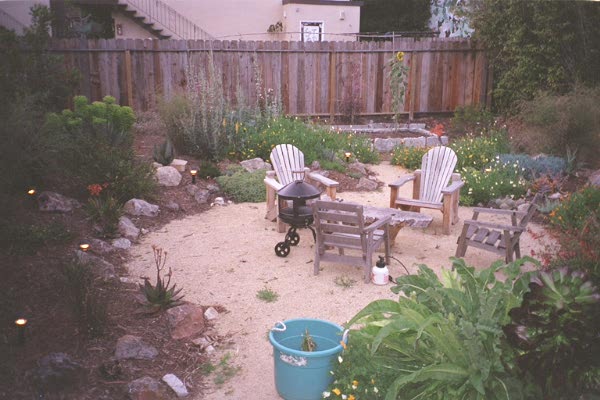 Next step: replace the back doors, and maybe paint a mural on the back of the house. 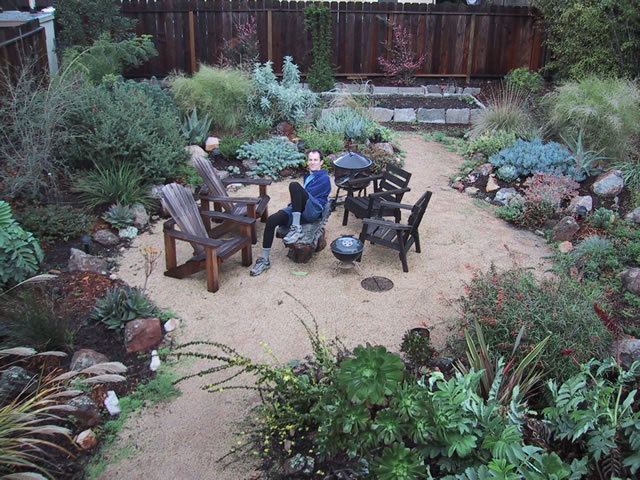