Mt. Baldy is a big (10,068') mountain just north of Los Angeles. My close friend and climbing partner Michelle Yu climbed it many times (dozens, maybe 50, usually by herself, often with heavy weight in her pack). She was killed there on Dec. 8, 2010, while training for an expedition to Aconcagua. She got disoriented in fog at the summit, went the wrong way, and ended up falling 2,000' onto rocks.

It's the third anniversary of this event, and it seems like an appropriate time for me to go to Mt. Baldy, climb the mountain, pay my respects, and think about Michelle (although I think about her every day as it is; she was a unique and irreplaceable person).

I get an early start and set out from my Anaheim hotel before 7 AM. I drive north, through LA and Claremont, and up into the hills on Mt. Baldy Road. So Cal is in the midst of a cold snap, and a storm 2 days ago brought snow above 5,000'.

I stop in the last small town, hoping to get some food for the trail. There's no store, just a diner, which is closed. But a woman inside sees me, opens the front door, and asks me if I need anything. I ask if I can get a sandwich to go. She asks me if I'm going to Mt. Baldy, and urges me not to: the trail is extremely icy, and the wind-chill is below zero at the trailhead. I tell her I'm there because of Michelle, and she knows who I'm talking about; I get the impression that she knew Michelle. She says that Michelle was killed on a day like today, and advises me to be extremely careful. Then she makes me a beautiful turkey sandwich, free of charge.

I drive up to the trailhead. It's 20 degrees and there's a steady wind about 15 MPH. However, I have my warm clothes, including winter mountaineering boots, so I'm OK. Actually my body enjoys the cold; I feel energetic. The route is a dirt road for about half a mile, then a narrow trail, marked only by a cairn, that heads uphill to the left. After 100' I pass the log book where Michelle made an entry on her last day. 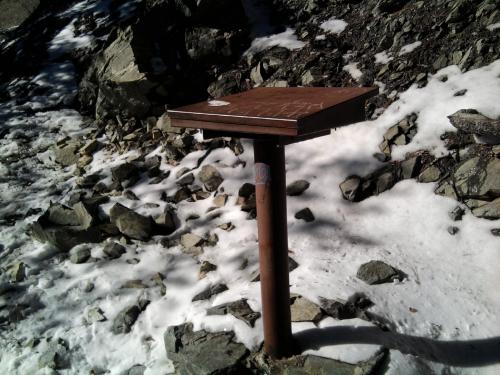 The trail goes up the right side of a steep-walled canyon. Sure enough, the trail is very icy. Previous hikers packed down the snow on it, which then melted, formed puddles, and refroze. In places it's glare ice. I don't have crampons. To walk, you need to look for sources of friction: protruding rocks, patches of packed snow, dirt. 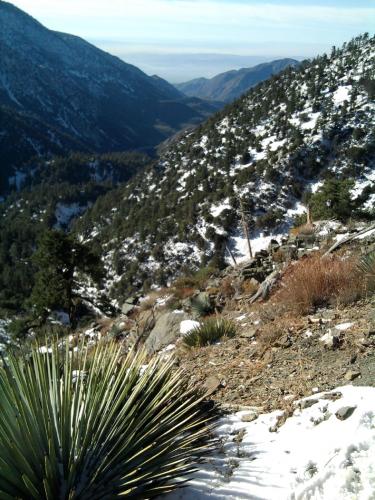 The flora was an odd mixture of desert and alpine plants 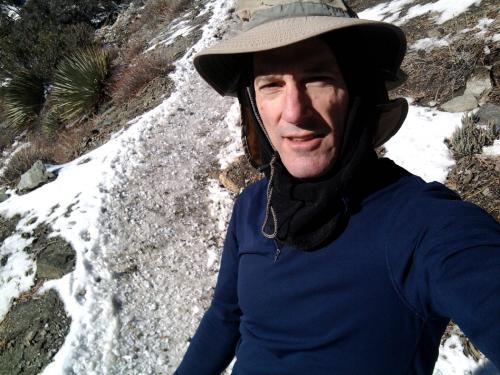 Note icy path. Here it was covered with ice chips, which provided some traction

Douglas firs have sprinkled cones on the trail. I pick up a few for my shelf-top collection back home.

At the top of the canyon, visible even from the bottom, is the Sierra Club ski hut. After a while (1-2 hours, I'm not keeping track) I reach the hut. The wind is gusting harder (~25 MPH) and I'm a bit cold, especially my hands. Disappointingly, the hut is locked. I huddle in the alcove, protected from the wind, and eat a half sandwich. 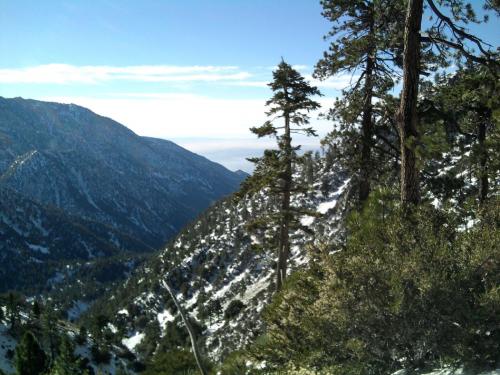 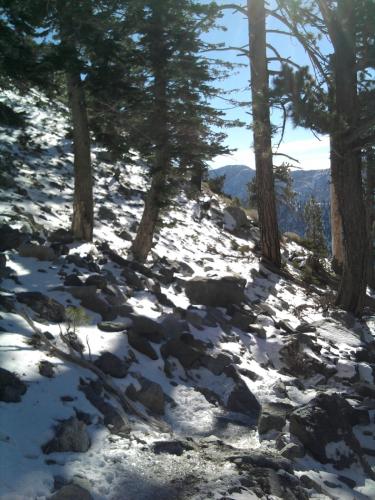 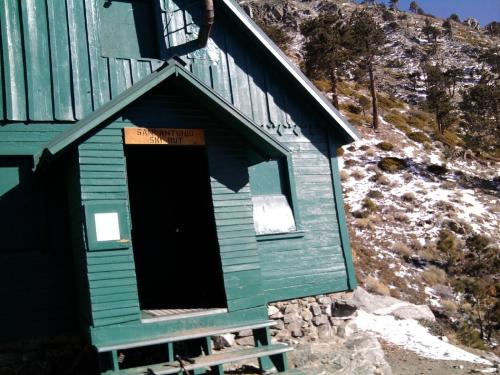 Above the ski hut is a large scree-covered bowl, at the top of which is the summit ridge (I assume this bowl is where people ski, although it's way out of my league in terms of difficulty). The trail continues to the left across the bottom of this bowl, then zig-zags up a steep tree-covered slope to the start of the summit ridge. 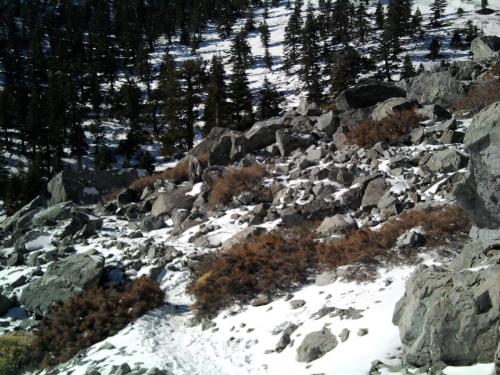 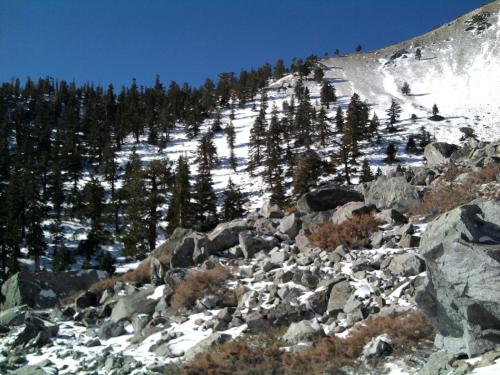 Edge of bowl visible at right 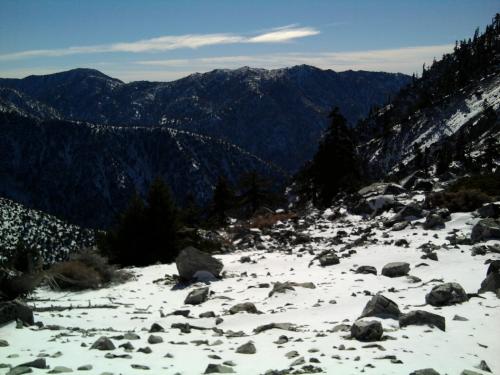 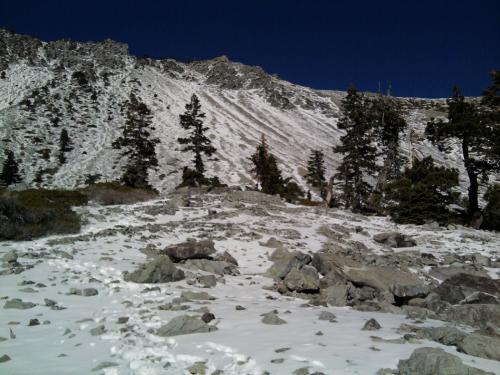 The wind steadily increases as I approach the ridge. It's blowing around snow granules, which sometimes drift across the trail, obscuring it. At the summit, which is 500' higher and a half mile away, I can see long plumes of blowing snow, indicating very high winds. In light of these factors, I decide to turn around when I reach the ridge, and not to go for the summit. I'm not particularly tired, but I want to minimize my risk, especially considering that I seem to be the only person on the mountain today.

On the ridge, the wind is fierce: maybe 45 MPH. I take a picture, which means taking off a glove and tucking it under my arm. After taking the picture, the glove is gone, blown away by the wind. I have a moment of panic: descending with a bare hand, or with a single pole, would be bad. Soon, however, I find the glove about 20' away, stuck in the middle of some manzanita.

The summit, which I avoided 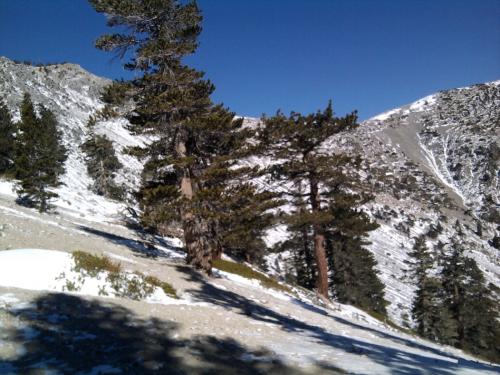 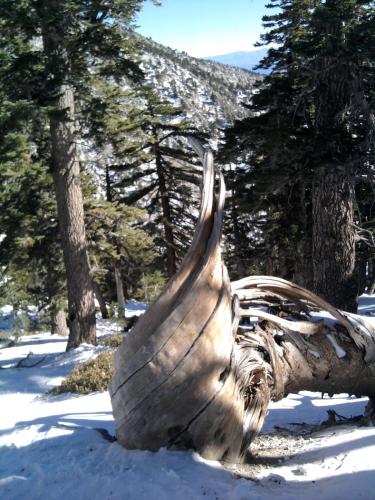 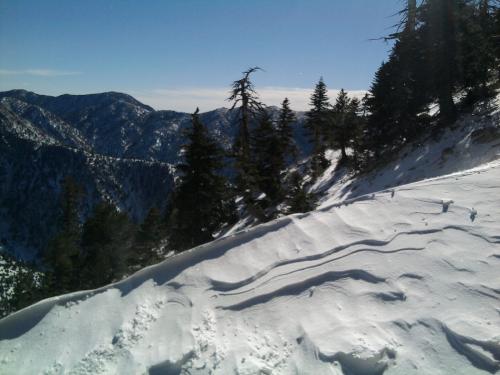 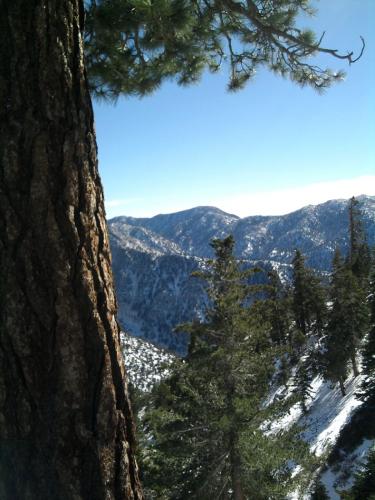 I descend, feeling very good and enjoying the spectacular day. The icy conditions require extreme concentration and patience, which is stressful but kind of fun. I have 1 actual fall (on my butt) and several near-misses.

Nearing the trailhead I finally meet another hiker, a young woman on her way up. We chat briefly. I tell her about the ice, and she says she's carrying "micro-spikes", which I guess are a kind of small crampon; I clearly need a pair.

On the drive back, I stop at the diner, hoping to thank the woman who gave me a sandwich, and to tell her the story of my hike. Unfortunately she's not there, but the hostess on duty knows who she is ("Missy") and promises to convey my message.

Back to Michelle. During the drive and the hike, I knew I was experiencing things that she experienced many times, and I had a strange '2nd-person deja vu' feeling, as if I were seeing through her eyes and thinking her thoughts. I got a heightened sense of how obsessive she was about mountain-climbing; this is a long drive and a hard climb, and she did it every weekend that she could.

I also felt like I channeled her thoughts on her final day, when she climbed alone into storm clouds and didn't bother to consult compass or GPS in the white-out at the summit - both absolute mountaineering no-nos. She must have felt that this would strengthen and harden her somehow. She had been turned around (i.e. kicked off the expedition) on Mt. Denali not long before, and she didn't want that to ever happen again. She thought of Baldy as a workout mountain; she had gotten lost there before and found the trail again. She didn't think of the mountain as potentially lethal.

Intertwined with this was a sense of my own role in what happened. My trip to Mt. Shasta with Michelle in 2003 was largely responsible for her getting into mountain climbing in the first place. I talked with her on the phone the day before her death - could I have sensed the danger of the situation, and dissuaded her from going? Finally, although Michelle's obsessive drive may have come largely from within, it's likely that at some level she was trying to prove something to other people - and in particular, me.