(Photos by Seth and Dan.) My friends Dan and Seth have been climbing outside a lot over the last couple of years, and they wanted to include me in one of their trips. We settled on Bear Creek Spire, an 800' climb of moderate difficulty (5.7 and 5.8) on a spectacular Eastern Sierra peak. The hard part is the altitude (the top is 13,800') and the approach (6 miles, gaining 2,500').

Seth and I drive from Berkeley to Bishop, where Dan and his GF Cori have rented an Airbnb. We go through Tuolumne Meadows. Wanting to get a bit of acclimation, we stop to hike up Lembert Dome - not on the emasculated new trail but on the old one, now barely visible and with lots of treefall, skirting the left edge of the dome.

I show Seth the V0 bouldering move near the top, which is scary to do in regular shoes. 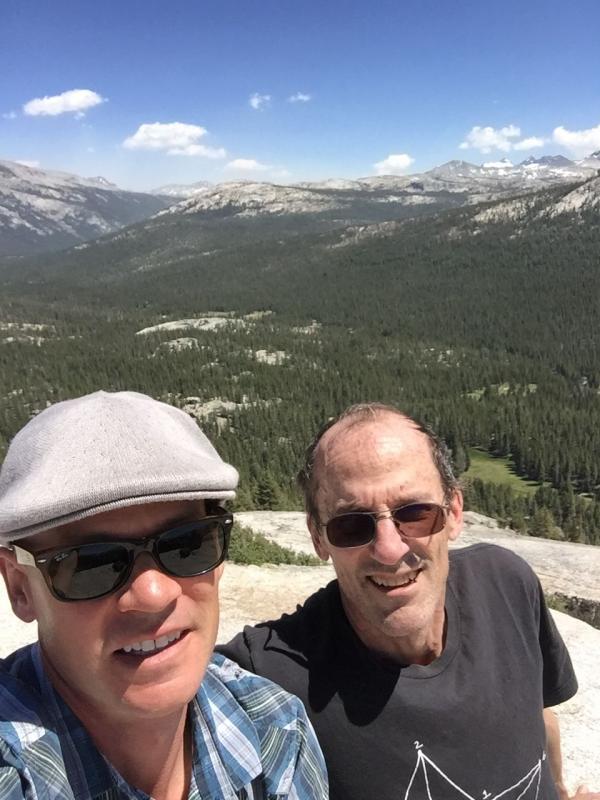 With Seth on Lembert Dome. Mt Lyle possibly in the far background

We meet Dan in Pine Creek Canyon to practice the techniques of 3 climbers on one rope. The idea is that I climb on a bight in the middle of the rope, 20' or so above the follower. If I fall it's no big deal. If the follower falls it will likely pull me off too, and then we'll have two body weights hanging from the anchor, which is OK as long as the anchor is bomber. We do 1 pitch of this and it seems OK. 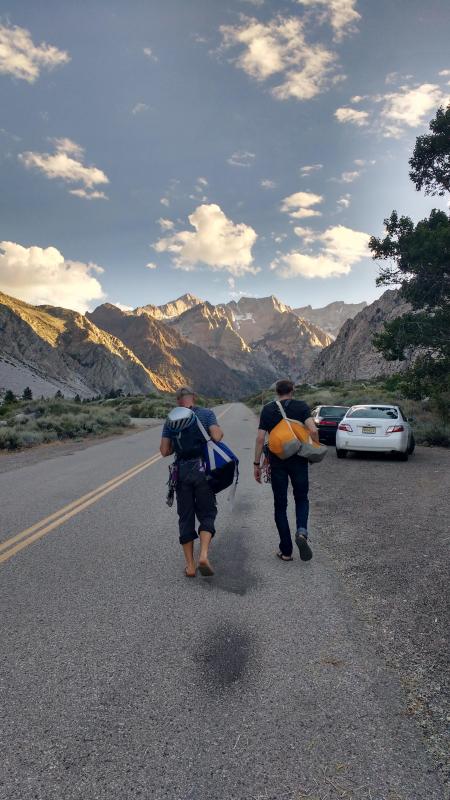 After the warm-up climb. Yes, that's what the eastern Sierra looks like

We drive into Bishop, stopping at the Von's to get food for dinner. Then we drive to the rental, which is about 10 miles outside of town in an odd development near Buttermilk boulders. On the way, on Hwy 168, Seth and I stop at a gas station grocery store, which is actually groovier and more complete than the Von's.

Dan and Cori fix some nice pasta and salad. We get to bed early-ish (11) in preparation for tomorrow's 4:30 wakeup. 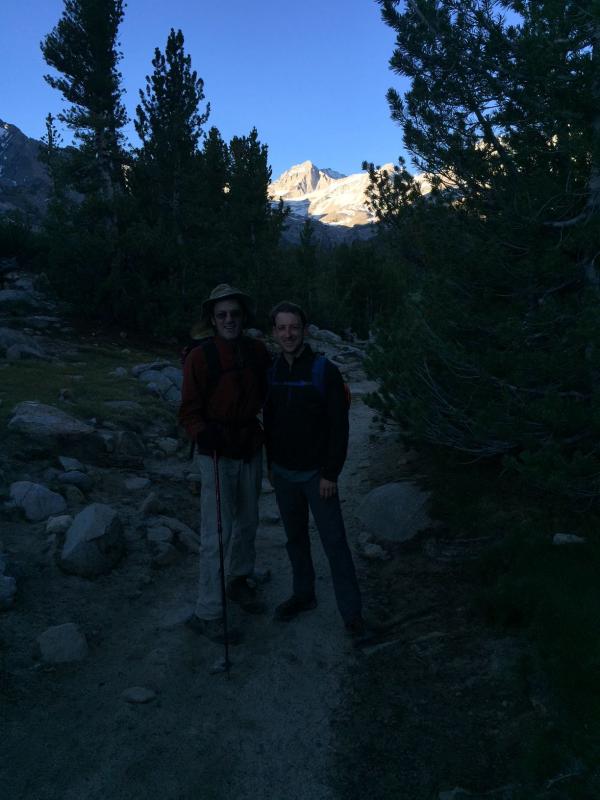 6:15 AM start. With Dan. Bear Creek Spire in the distance.

The trail starts around 10,000'. It climbs gradually and passes a series of lakes. I feel the altitude immediately, and to limit my pulse rate I have to go 5% slower than Dan and Seth, who pause every now and then to let me catch up. 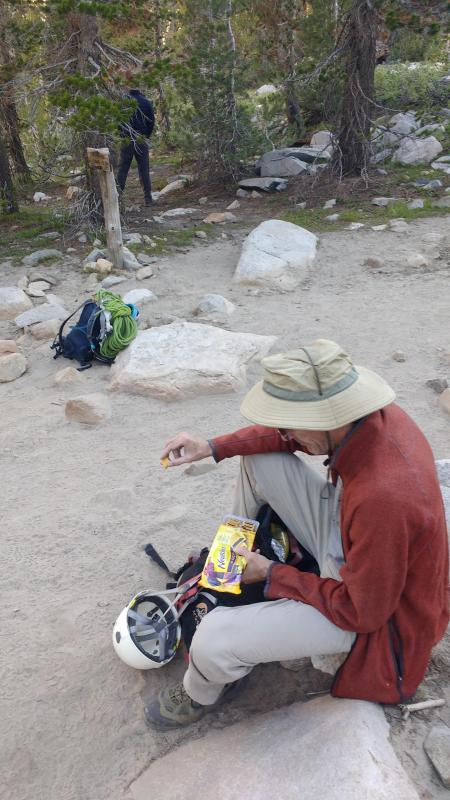 Fig Newtons are my hiking staple. Seth waters a tree.

At Gem Lake the trail ends and we angle up the slope on the left side of the lake, which is a jumble of large jagged boulders. You have to pick a path along the tops of these, which are mostly edges, points, and sloping surfaces. Every step is a balance challenge, and my balance is compromised because of lack of sleep and altitude. Dan and Seth seem to manage this pretty well, but I struggle. 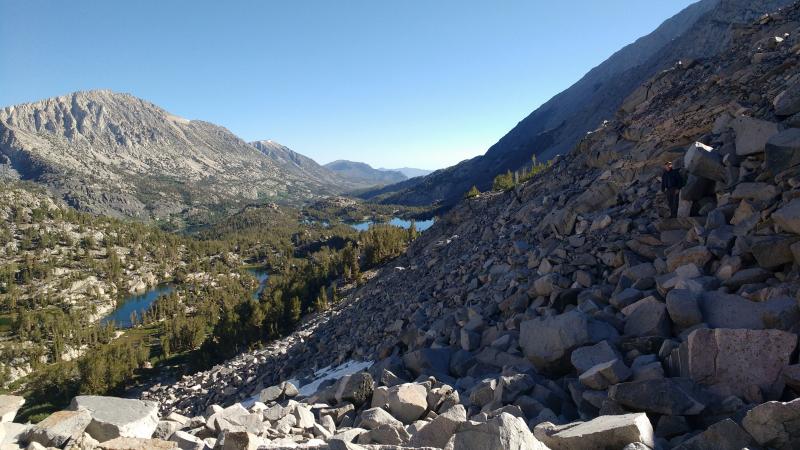 Looking down the boulder field. That's Seth. I'm so far behind that I'm not in the pic. 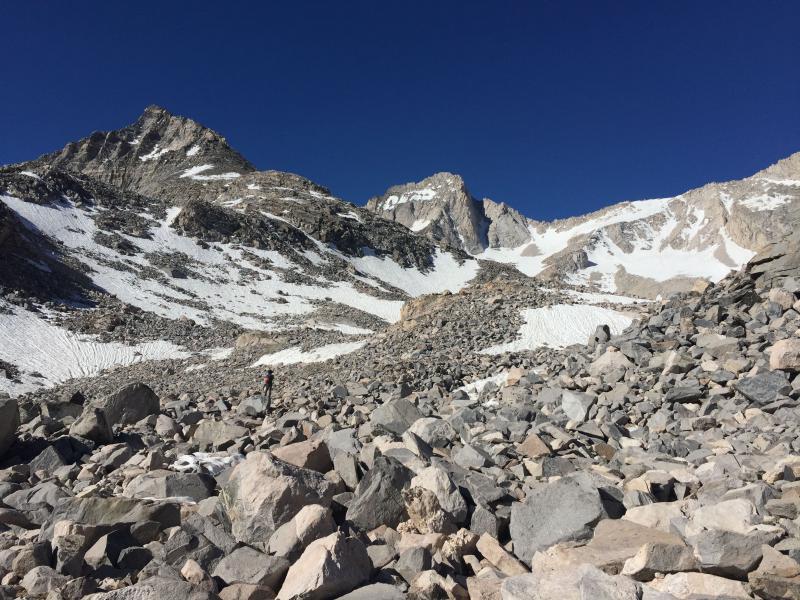 This continues for a while. At points there are traces of a trail. I leave my hiking poles, which are doing me no good. Dan graciously takes the gear rack from me to lighten my load.

We finally get to Dade Lake, which is the highest of the lakes. It's above the tree line and partly covered with thin ice. The spire looms over us, maybe .5 miles away. We refill our water bottles directly from the lake; little danger of Giardia here. 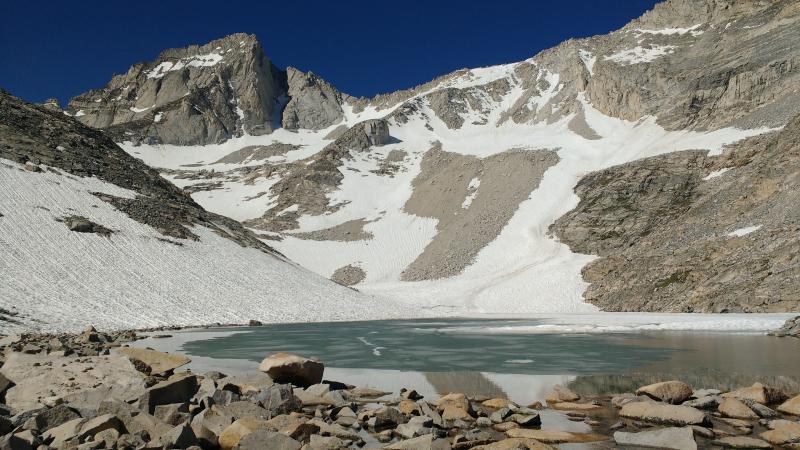 Above the lake it's mostly snow. We angle up the steep snow slope to the left of the lake. The snow is heavily suncupped and is very slippery. Again, Seth and Dan seem pretty comfortable and move quickly, but I do a lot of slipping and some falling, even while following their tracks. Crampons would help a little, but I didn't bring them.

Traversing the slope is a pain. After a while Dan turns and goes straight up the fall line, following one of the corrugations that offer some footholds. I try doing the same thing, headed for some rocks at the top of the slope. At first it's OK, but with 15' to go I start to slip downhill, and have to dig into the snow with my fingertips - sort of like rock climbing but everything is slippery and ice cold. Summoning all available strength, I make it to the rocks. There's a 1' chasm between snow and rock; I gingerly step across this and get my foot on a small ledge on the rock. Then a few rock-climbing moves to get to the top.

At this point I'm on snow-covered flat area slightly below 13,000'. Dan and Seth are there, waiting for me. The start of the climb is maybe 300 yards away, with some additional climbing over mixed rock and snow. It's almost 11 AM - 2 hours behind schedule. It's obvious that I've been slowing down Dan and Seth, and I'm completely gassed so this is only going to get worse. I tell Dan and Seth to go on without me, that I'll meet them back at the car, and that I'm very happy to have gotten this far and not disappointed at all.

Feeling extremely relieved, I sit on a rock and watch Dan and Seth continue to the base of Bear Creek Spire. 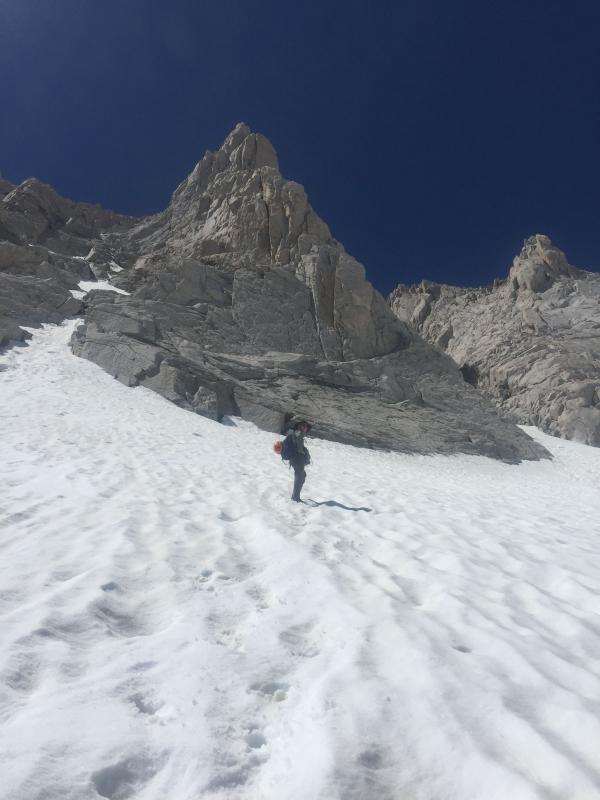 The base of the climb. Dan hit the wall here.

As they're crossing the final steep snow, I start heading down.

Finding the optimal route is easier on the descent than the ascent, because everything is laid out in front of you. For example, I avoid traversing on the snow by going straight down to Dade Lake, then walking along the shore, where the snow is level (albeit cupped and slippery).

There are some fishermen at the lake. One of them calls out to me several times, to make sure I'm OK and have food and water. I thank him profusely and assure him I'm good.

I move onto the area of giant sharp boulders. It's still a pain, but much less so because a) I follow a better route - again, dropping down to a flatter part rather than traversing higher up, and b) because I'm no longer in a hurry, I can do better micro-navigation, i.e. finding staircase-like sequences of flat-top rocks. As a result of the route change, I never find my poles, which is OK because they're approaching end of life.

I work my way slowly down the long slope, enjoying the feeling of being in control in a somewhat intimidating environment. I slip once but catch myself on my left hand without injury.

Eventually I reach Gem Lake and breathe a sigh of relief; I've done the hard/dangerous part of the descent. From here on it's just a trail.

The last 4 miles go by fairly quickly. I fall in behind a group of fast hikers. I'm a bit tired and sore all over, but nothing hurts.

I reach the parking lot at 2 PM, soak my feet a while in the cold stream, and change into my sandals. I figure I might have to wait here as much as 8 or 9 hours. I recline the car seat and close my eyes for a while, then play a game on my phone. I figure I can kill time by listening to the large stack of CDs I've brought.

However, at 4:30 Dan appears in the parking lot, followed by Seth, both of them looking rather knackered. Their story is this: when they reached the start of the climb - shortly after I left - the 13,000' altitude suddenly hit Dan like a ton of bricks. Total loss of mojo. They decided to turn around, but spent a while climbing around just to get a feel. The start of the route was up some 4th class. Dan free soloed up a ways, and chunk of rock pulled out in his hand, nearly causing a bad fall. Then they descended. Seth said that the boulder slope was very difficult for him because of exhaustion. 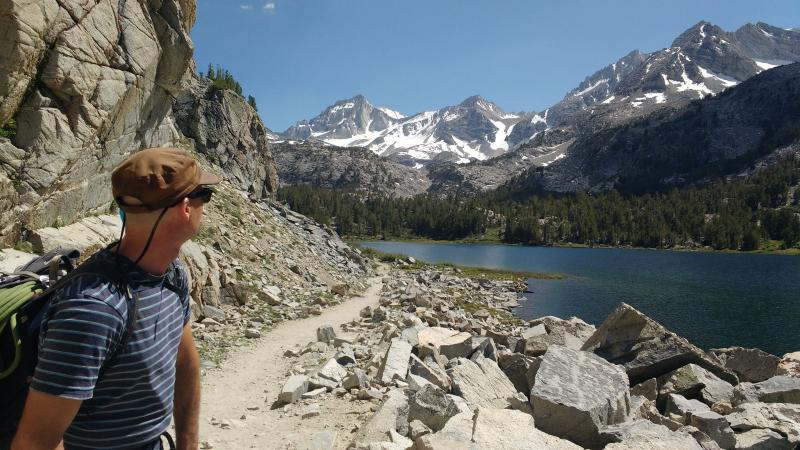 Seth ponders what might have been. BTW that's my cap, which he borrowed. 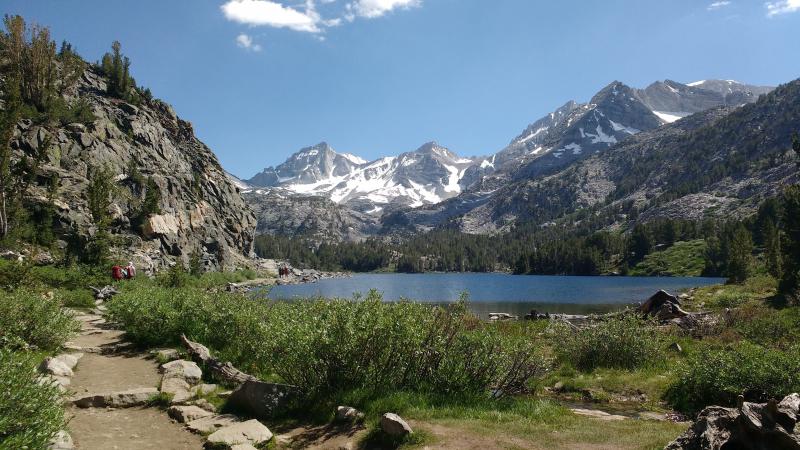 We're all in a good mood. Today was a learning experience, not a disappointment or failure.

We stop at Tom's Place for some fruit juice and chit-chat. Back at the cabin, Seth's Brit friend, Hugo from Santa Cruz, has arrived, a wonderful guy with whom I hit it off immediately.

After relaxing a bit, and getting some mojo back, we all (including Cori) go for a little hike around Lake Sabrina, which is a short drive away. We bush-whack down some boulders to the shore, and Dan and I take a full-frontal dip in the lake, which is bracingly cold. Unfortunately there are tons of mosquitos, which send us fleeing to the car.

We drive into Bishop and get food and beer at the now-traditional Mountain Ramblers.

I sleep well for a change. We're all a bit lethargic after yesterday's exertions. Hugo and I discuss sports that could replace American football.

We decide to do a bit of climbing to make up for yesterday's lack of it. Dan picks out an area in Pine Creek Canyon with some easy sport routes. Note: in any group of > 2 people, someone has to take charge or nothing happens. Thanks to Dan for assuming this role.

So we pack up and drive up Pine Creek Canyon road all the way to the end. The approach (~1 mile) is kind of irritating. The last part is up a steep slope with dirt and partly loose rock. My balance is still a bit off. 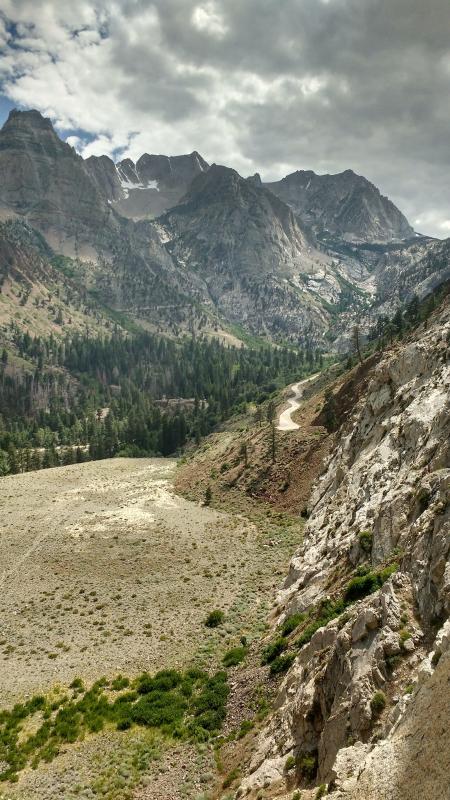 The approach crossed this dry lake-bed

The climbing is slab. We start with a 5.5 that needs a 70m rope. Just uphill is a fun-looking 5.8 which also needs 70m. Seth and Hugo try it. Seth's not comfortable with one move so they get Dan to finish the lead. I try it, and the crux move is indeed hard, mentally rather than physically. You have to trust a smear. 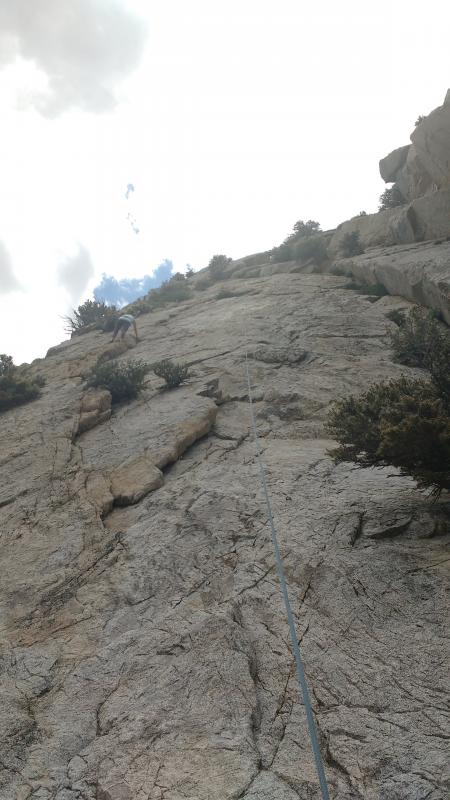 Meanwhile, Dan ties together the two 60m ropes so Cori can do the 5.5. He ties them at the bottom and carries up the ends separately. When he reaches the top we all realize that his plan isn't going to work; we can't lower him down because knots don't fit through biners. So he rappels down, and we work out a scheme where Cori ties in on a bight in the middle of a rope. Cori and I spend a couple of minutes convincing ourselves that this is safe, and she does the climb with me belaying. Next time I see Dan we'll figure out this 2-rope thing once and for all.

I have a long drive back to Berkeley so I leave before the others. The drive has the usual features: a) there's no gas along 395, so I'm forced to buy gas at the Lee Vining Mobil station for $4.59; b) driving through Tuolumne, there are infuriating clumps of cars going 38 in the 45 zone, and the lead car driver doesn't know he's supposed to pull over, and no one has the guts to pass (except, eventually, for me); c) toward the end of Tuolumne I put on inspiring CDs (Allman Brothers, Quicksilver, Jimi) and have deep and intense thoughts about the meaning of life.

Summary: a great trip in spite of BCS failure. I'd consider re-trying BCS but only with a) several days of acclimation at 10,000'+; b) camping somewhere fairly high, so we can actually be climbing by 9 AM or so. Neither of these is likely to happen, I'm afraid.

Injuries: slight soreness in right knee on the way down from BCS. Nascent blister on right small toe, which I kept at bay using a type of moleskin that's clear and a bit mucoidal. My damaged right hand is sore, mostly from belaying, but not painful.