Some pictures by Wenjing Wu.

My annual trip to Europe for the BOINC workshop.

I walk to Ashby BART, barely catch a train (a good omen), and ride to SFO. The trip to Budapest (via Frankfurt) is smooth.

I take the shuttle bus to my Airbnb rental at 1132 Budapest, Gyöngyház utca 8. Everything has gone so well that I'm an hour early, and the owner (Reka) isn't there. I walk for 30 min; she's there when I return. The ground-floor studio apartment is perfect - I love Airbnb.

The neighborhood consists of old apartment buildings, and is somewhat depressed. There are many small stores and restaurants, but things seem empty and dead. 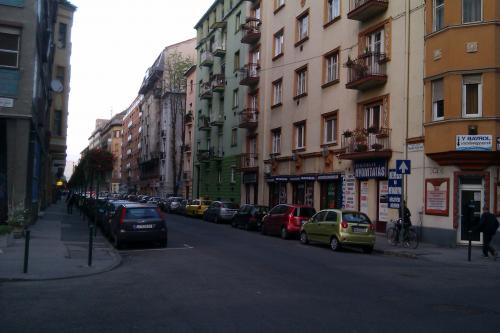 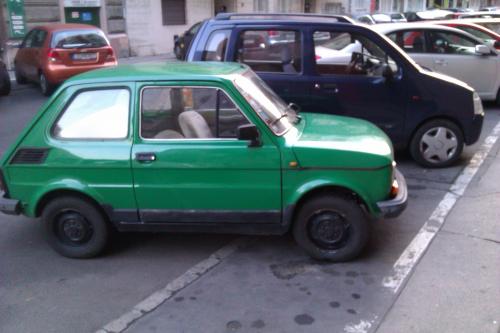 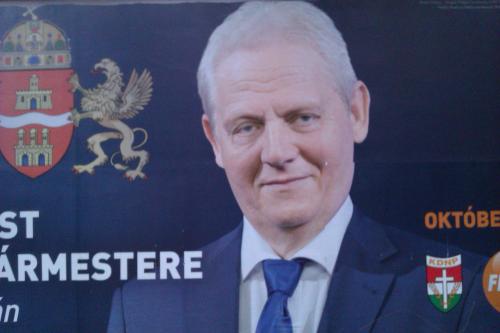 An election is coming up and there are many posters of candidates, most of whom look unsavory

Acting on Reka's directions, I head for the West End City Centre mall, which is nearby. It's teeming with people. The mall is mostly multinational fashion-brand stores - yuck! On the lower level there's an enormous food court, lots of small local stores, and a grocery store (Spar). I stock up on food; my goal is to make my own meals as much as possible. I have a dinner of brown bread, sausages, Hungarian sauerkraut, mustard, and a dark beer. I pass out at 7:30 PM, wake up around 1:30 AM, and doze until 6 AM.

I make an omelet with garlic, onions, pepper, and tomatoes. The kitchen has about 1 square foot of counter space, so cooking is a pleasing logistic challenge.

8 AM: I have no coffee, so I go in search. I walk to the river (the Danube), and south to a main boulevard. There's a McDonald's, not open yet. On a side-street there's an odd cafe with a pretentious Indian spiritual/meditation/yoga shtick. The customer in front of me is an irritating complain-about-everything Indian guy. I eventually get my coffee (not great) and process some emails.

At 2 PM I meet Matt B at the mall. We walk around a bit and get Greek food at a place on the main drag.

At 5:30 I meet Arnaud, Wenjing, Niklas, Rom, and his grandfather near SZTAKI and we go to dinner at a Hungarian place that's plentiful but mediocre. I get the stuffed cabbage; Wenjing gets roast duck. Restaurants here are cheap; a nice meal is $10-12. But the food tends to be greasy and bland.

Rom's grandfather (whom I affectionately call "Grandpa") is 84, and is uncannily similar to John Collum's Holling Vincoeur character from Northern Exposure. He recently purchased an amphibious light plane, and flew it from Florida to Anchorage over a month or two.

I've been in vaguely bad health for a few months; currently I have a lingering cold that's in the laryngitis stage, coupled with fatigue (mental and physical). My voice is a croak, and it hurts to talk. I'm worried about my ability to function at the workshop, but I'm also hopeful that the change of venue will cause improvement.

First day of workshop. I give a 2.5 hour talk on A Brief History of BOINC, for which I've vastly over-prepared and have 26 pages of notes. My voice holds out OK, although it's a bit of a trial.

Bruce A. is stultified by the hours of talks in an airless room. Afterward, he and I go for a walk of a few miles: along the river and past the parliament building, a vast Gothic structure. 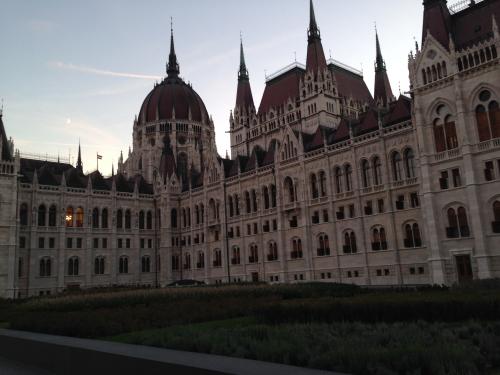 Bruce tells me about a milling machine he bought and is painstakingly restoring. It's not clear what he's going to use it for. That's Bruce.

We have dinner at a nice place (but not great food-wise).

My physical fatigue, surprisingly, has abated a little.

The workshop dinner is held at the nearby Kanaan restaurant. There are about 25 people. They put us in the upstairs room, and the service is abysmal. They take our order after 1 hour, and the food arrives after 2 hours. I sit with Christian, Wenjing, and Arnaud, so it's not so bad.

Afterward, Wenjing, Christian and I walk along the river to the Cable Bridge. I start to climb a wall of the parliament building, unaware that a security guard is watching me from 50' away. Christian yells at me to come down, possibly avoiding an unpleasant incident.

The nighttime view of the river and palace is beautiful. An enormously long (~200') cruise boat turns around and docks. 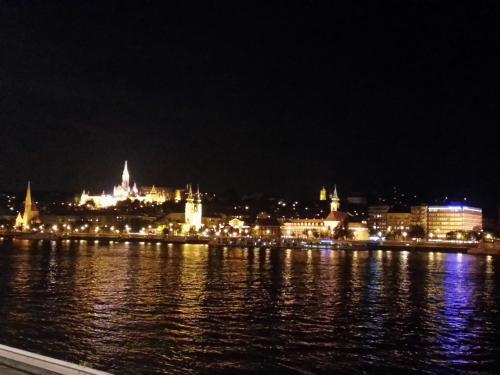 Looking across Danube toward Pest 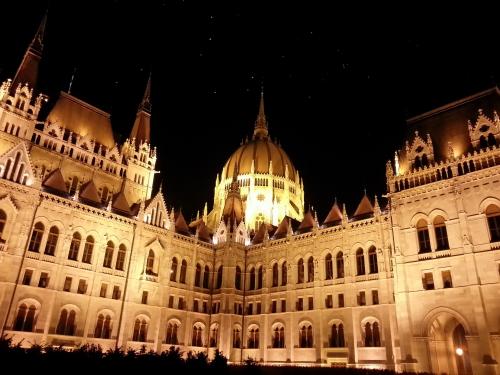 In hi-res version, the white dots are not stars; they're birds who endlessly circle at night

1st day of hackfest. The Samsung (Chiel) guys arrive from Vienna and we have a long lunch. Long chats with CPDN guys and Claire from CERN.

Wenjing and I have dinner at the West End mall food court; she's unexpectedly taken with a (bad) Mexican food place there. She does a bit of shopping. 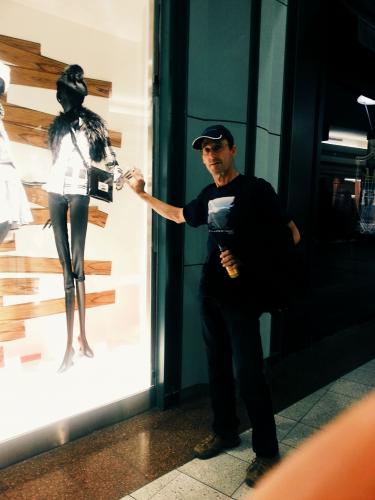 I buy more groceries at Spar, including some chicken, onion, mushrooms, and pepper, which I cook the next day.

Afterward, a group of workshop die-hards (me, Wenjing, Christian, Arnaud, Niklas, Thomas M.) go to the food court for dinner.

Christian and I walk around the mall, ostensibly to find an anniversary gift for his wife. We check out a health food store, and Christian accidently knocks over a rickety table full of merchandise. The proprietress is apologetic. I tell Christian he needs to buy the present here; he gets a bag of amaranth/carob cookies, which actually look pretty good. I buy a box of ginseng/Ginko Biloba tea. I tell the proprietress that her store is the best one in the entire mall, which may in fact be the case; I liked her aura.

I meet Wenjing at 9 AM. We get coffee at McD's, cross the bridge to Pest and walk to Castle Hill. 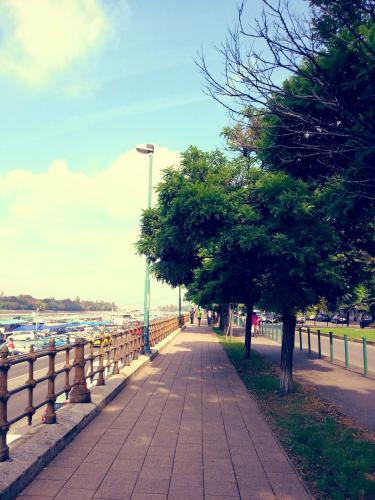 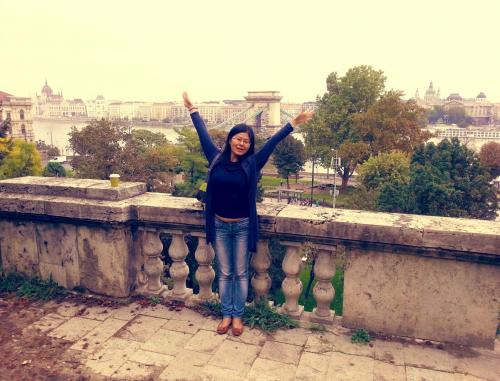 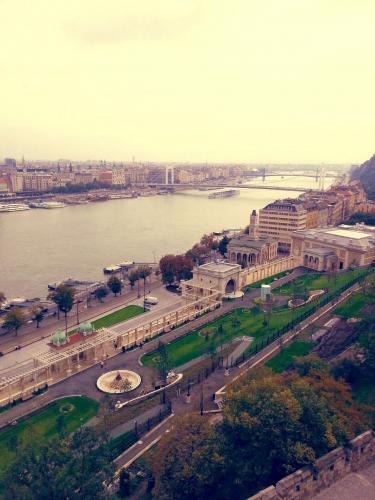 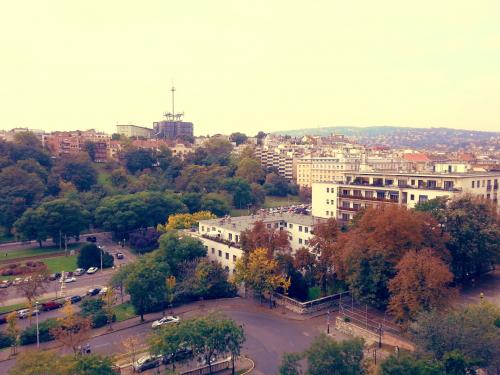 I chat up a group of American girls who are doing a semester abroad at Oxford. Wenjing and I tour the Hungarian National Gallery, which is excellent. Many of the painting speak powerfully to me. We walk around the outside of the palace. Wenjing heads off to catch her plane.

I kill some time, reflecting on Life and the passage of time, waiting to meet Valter for the Palinka and Sausage festival. He finds me sitting on a bench watching a pair of palace guards do their bizarre goose-stepping ritual.

We pay 2000 Fl to get into the festival, which buys you a souvenir glass and one shot of Palinka. For everything else you have to use a high-tech payment card, which is kind of a pain in the ass, but I buy one and get a plate of sausage, mustard, and potatoes, which is a bitter disappointment.

Valter and I shoot the breeze for a long time. He's from Trento (near the Dolomites, in Italy) and is an avid mushroom-hunter; he's not so much into eating them, just finding them.

Valter doesn't look like an athlete - he smokes like a chimney, and has a grizzled and wild-eyed appearance reminiscent of Christopher Lloyd in Taxi - but it turns out that he's a former high-level volleyball player, and still plays. He once toured the Czech Republic and played against their national team. We talk at length about spiking, jumping, etc.

The Palinka Festival is slightly disappointing; it would have been better (more people) the next day. I bid farewell to Valter and walk home. 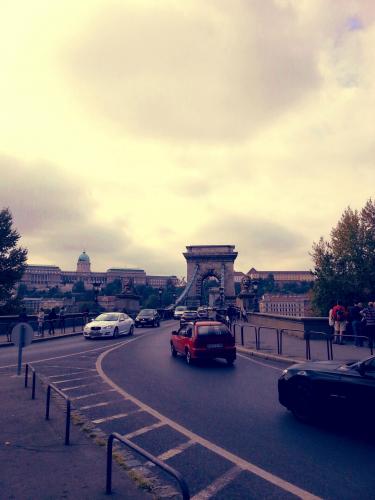 I want to do some extreme programming with Rom, so I walk to his hotel (a fancy place w/ spa). We sit in the cafe and hack for a couple of hours.

Rainy day. I walk to the Liszt Ferenc Memorial Museum and Research Centre, which is housed in a run-down residential building near the train station in Pest. The building was an early home of the Hungarian Academy of Music, which Liszt founded (and funded) in the 1860s. It includes an apartment where Liszt lived off and on (he rotated between Budapest, Rome, and Weimar) during the last 10 years or so of his life. This apartment has been restored to approximate its state during that period.

Liszt gave weekly group piano lessons in the living room. (BTW, he made so much money early in his career that beyond a point he never charged for piano lessons, and all his performances were for charity).

The apartment is full of instruments - 2 Chickering grands, a Bosendorfer grand, a harmonium (pedal organ), a hybrid instrument with both piano (Erart) and organ (Mason) keyboards, a small "glass piano" (mallets hit tuned pieces of glass), and a desk (where Liszt in fact worked) with a pull-out 3-octave keyboard with xylophone-like sound (Bosendorfer made this for Liszt).

It also houses his bookcases (1 for books, 1 for scores), a number of portraits and sculptures of Liszt and other composers, and display cases of awards.

The museum's web site has virtual tours of these rooms.

Of course, being the Liszt devotee that I am, I am profoundly moved and inspired by all of this, and spend at least an hour just soaking in the energy that still echoes in the rooms, 150 years later. Liszt, to me, was not just a great musician but one of the greatest humans of all time.

Liszt, BTW, was a great fan of painting. He saw all the great works in Italy, and many of his compositions were inspired by particular paintings. He wrote copiously about many topics, including painting. Some of his writing was in the form of "open letters", that were published in various places. If he were alive today he'd be a big-time blogger.

The museum has a small concert hall, I'm there in part to see a piano recital by a young man billed as "winner of the Béla Bartók piano competition". He plays the Moonlight sonata, and Debussy's Suite Bergamasque and L'isle joyeuse. (too bad - I was hoping for Liszt or at least something Hungarian).

He's OK. But between his pieces a young boy - 11 or 12 - comes out and plays several showpieces that I don't recognize. He's phenomenal; he's a natural talent, and has a wider tonal range than the older guy, as well as more drama and story-telling ability.

Later, I go to Rom's hotel for more hacking. We have dinner w/ Grandpa at Hand-Burger. Everything is home-made, including the beer. I get the lamb burger; extremely good.

At 8:30 AM I go to the Starbucks in the mall. I'm running low on cash and am pleased that my bank card is accepted. I plug in my laptop and work furiously (coding, then refereeing papers) for several hours.

Around 5 PM I go to Rom's hotel (he and Grandpa went to the Palinka Festival) and we hack for about 4 hours. 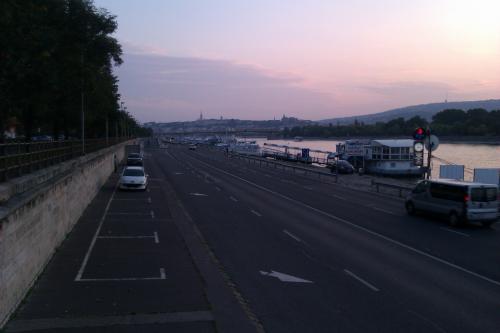 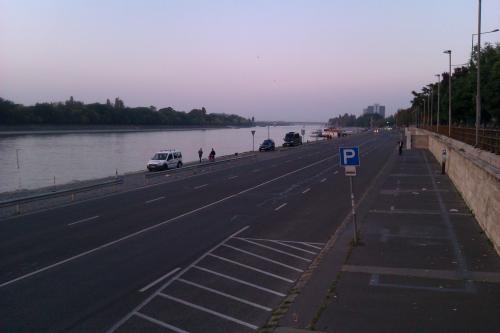 On the way back to the apartment there's a tiny beer store with some chairs out on the sidewalk. I've passed it several nights in a row, and recognize a couple of the regulars. I figure it's time for me to patronize the place. They have a nice selection of bottled beers, including Sierra Nevada Torpedo IPA (which I happen to have in my fridge back home). I chat with the friendly proprietor, and buy a Czech IPA, which is good albeit pricey (890 Fl).

I go to the mall and have breakfast at MacDonald's. What can I say? They're not so bad in Europe, and nothing else was open.

I clean up the apartment, put the key in the mailbox, and wait outside for the shuttle bus, which arrives promptly. So far (I'm not on the plane from Munich to SFO) it looks like an Astroglide day.

I never really got over the fatigue, though it was hard to distinguish it from jet lag; I slept well but not very much. The trip would have been a lot more fun if I had been non-fatigued.