Snowshoeing in the Sierras is pretty much my favorite thing in the world. Each of the past 5 or so winters I've vowed to do it, but time slips away and snow melts. But this year, thanks to the urging of my friend M, I made it happen!

After an unfortunately sleepless night, I meet M and we're on the road at 8 sharp. The drive up is smooth, except that I spill some coffee on my crotch (the lid on the damn commuter cup wasn't screwed on right). As we get into the mountains there's an unsettling absence of snow, but it shows up around the 6,000' level and by the time we get to Boreal (near Donner Pass) there's plenty.

There's a new setup where you can park on the road to the E of Boreal, but you need a Sno-Park pass (why they abbreviate "snow" is a mystery). Anyway, I got one but left it at home - D'oh! Fortunately I'm able to buy another one using my phone and they let me park.

It's about 11:30. M puts on her REI rental snowshoes (MSR Lighning); she's new to this but masters it quickly. We walk up the road. A black SUV is parked there in appropriately. A tall God-like figure comes down the road, running in snowshoes with a dog.

We go up the road to where it opens out into a meadow (covered with snow this time of year). It's very pleasant (50-ish) and snow conditions are good. M is taken with the color of moss on the trees. 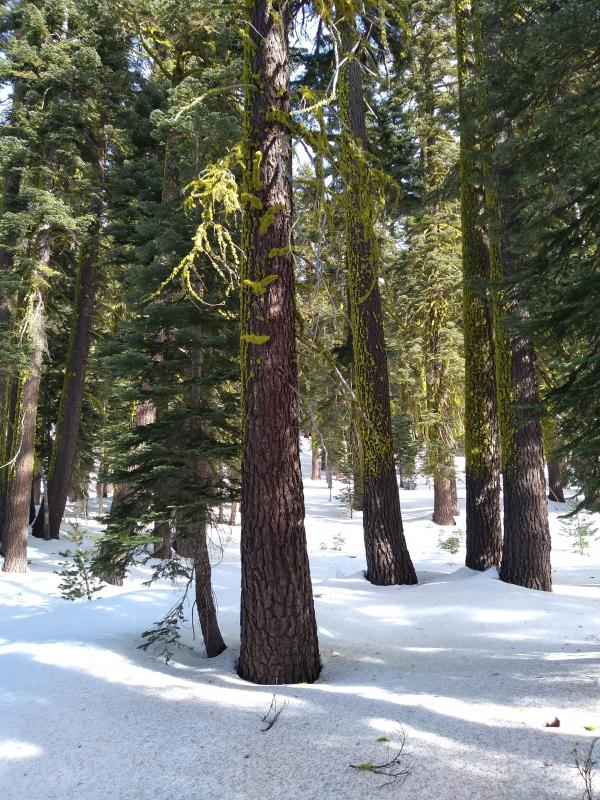 The dramatic black rock bluffs of Castle Peak loom in the distance. We take a hard right and follow some ski tracks leading towards the peak; I'm feeling impatient.

This takes us to the top of a medium-size hill, and then we have to drop down a little to head toward the peak. 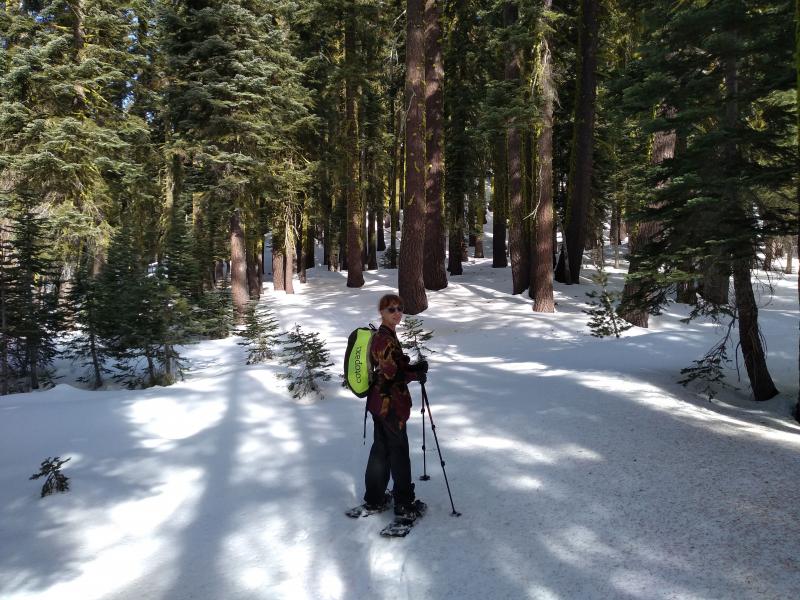 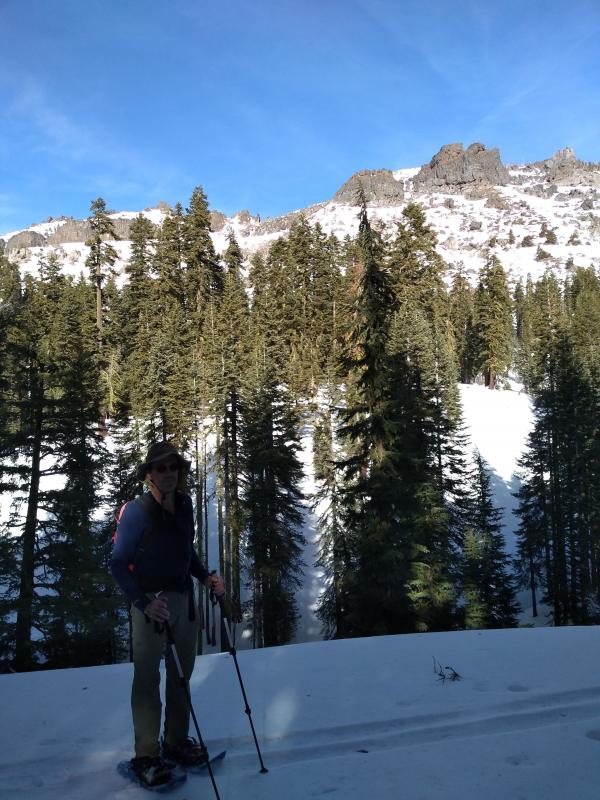 We stop in a beautiful sunny spot and have lunch: tuna/avocado sandwiches, and a soft-boiled egg which I eat in a single bite so that its still-liquid yolk doesn't run down and join the coffee.

At this point the serious climbing starts. 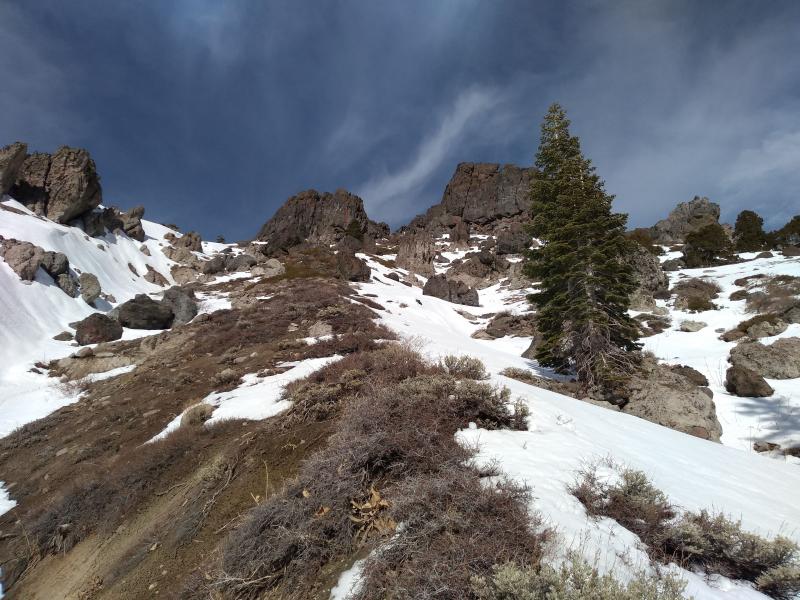 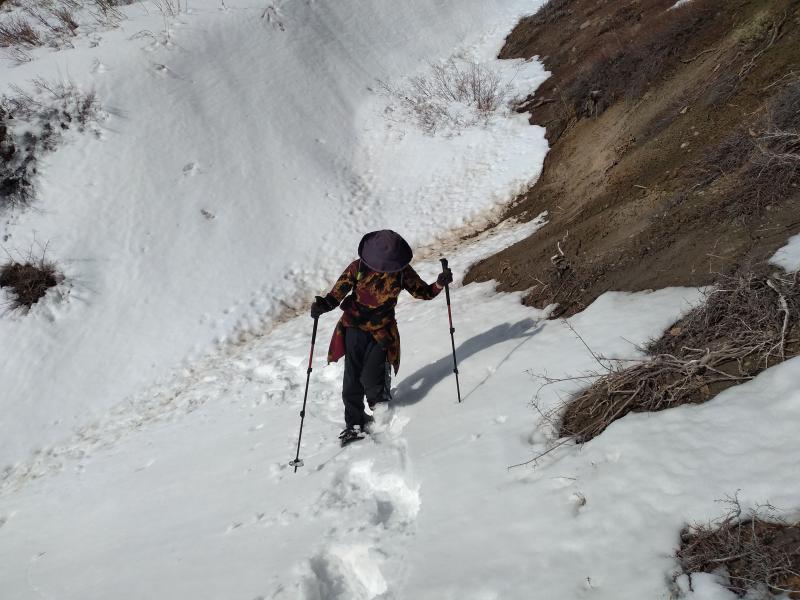 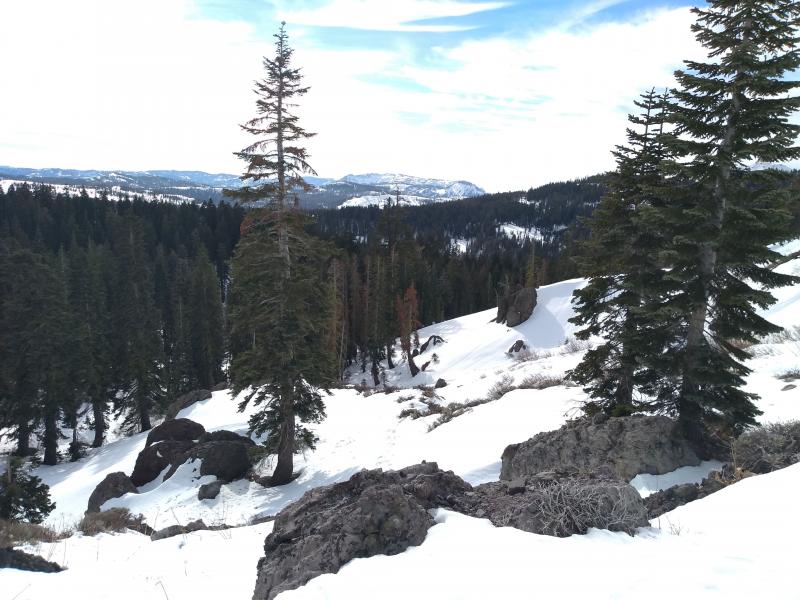 The snow on the rocky slope is patchy and it would be a bit of work to find an all-snow route to the top. 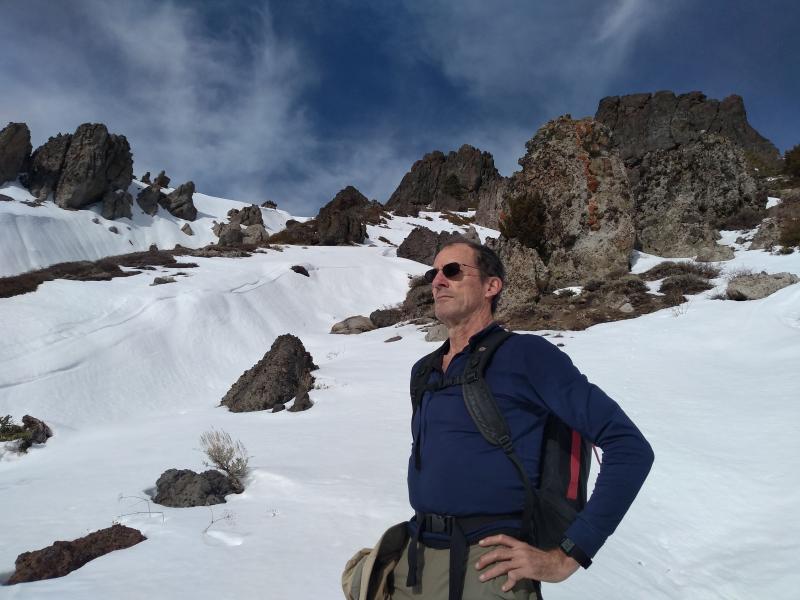 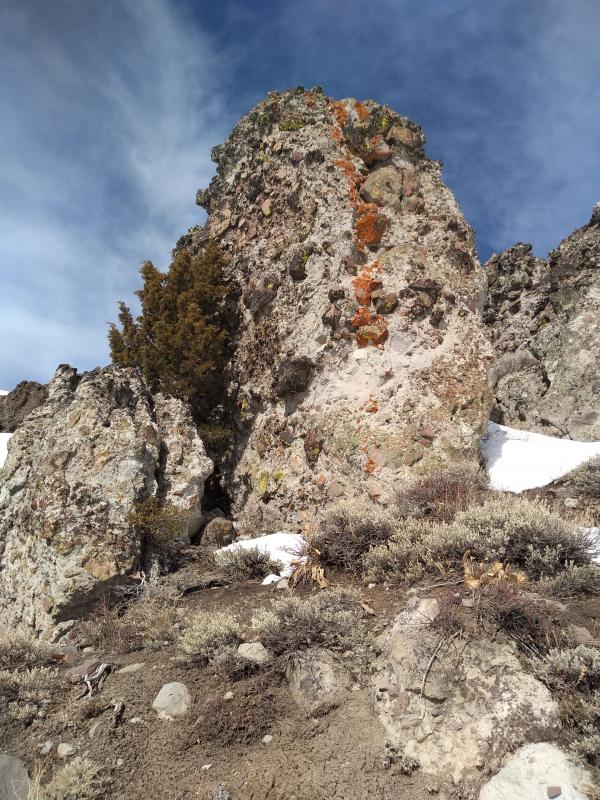 But this would be a giant exertion, and the snow is warming up and getting slippery; today is not summit day. So we go high enough to get a nice view (of various ski areas and more distant mountains), have another short break, and start down around 1:30. 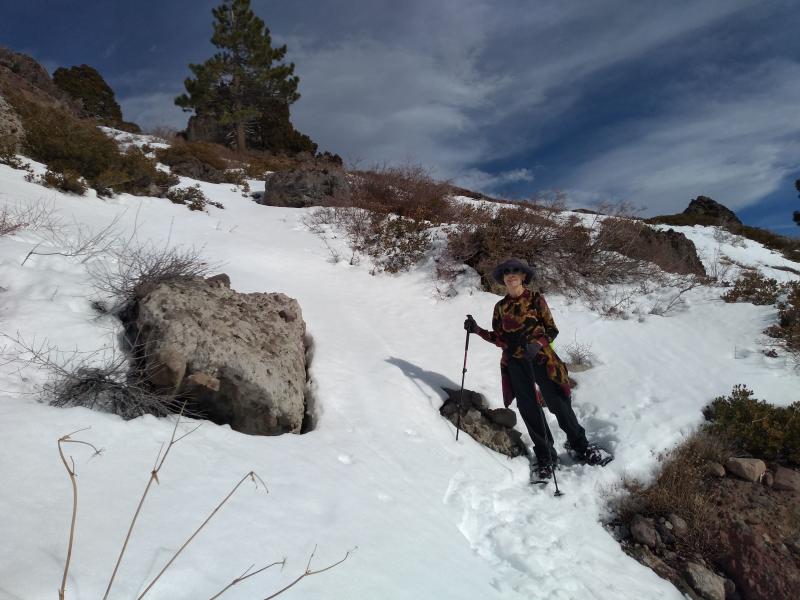 The descent is sheer delight. The great thing about snowshoeing is that you can pick whatever route you damn well please. 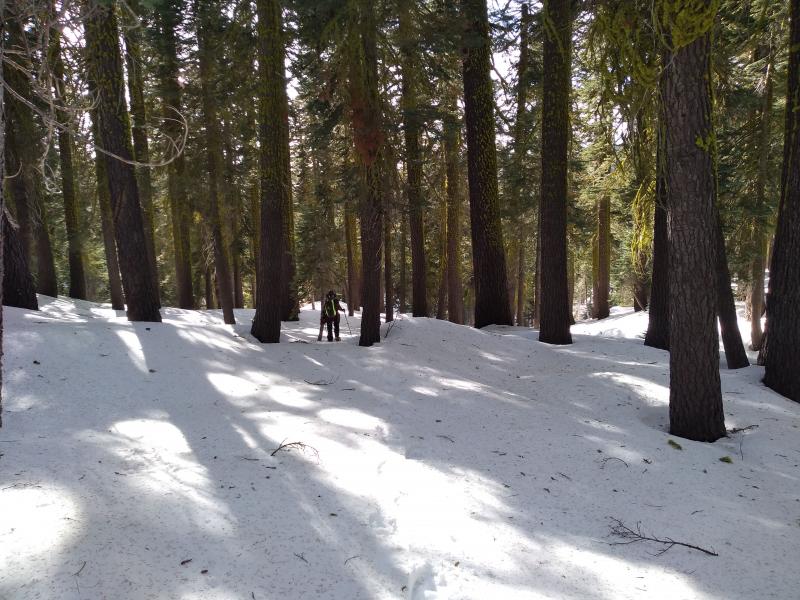 M has a couple of trip-and-falls due to snowshoe straps coming undone; the MSR mechanism leaves a bit to be desired.

We reach the big meadow. There's a tent to one side of it. A man is there with his 6-year-old son, who waves excitedly at us. What a great thing! (though I'm not sure it's legal to camp there). Later on there's the remains of an igloo.

The black SUV appears to have slid somewhat off the road. A young woman with artificially white teeth is shoving branches under the tires. Apparently the tires are spinning. I mention the rock-back-and-forth technique to her, and I'm pretty sure I could have got it out that way. It also occurs to me that my "come-along" (which I bought for civil disobedience purposes) might have come in handy.

We're back at the car around 3:30; it's already cooler and darker.

The drive back is absurdly smooth; we're in Berkeley by 6. Along the way - starting around Vallejo and continuing for the next half hour - there's the most spectacular and long-lasting sunset I've ever seen in the Bay Area. Usually you get the rose-tinged clouds for a couple of minutes and then it's gray and dead; this time it just went on and on.