Mt. Conness is a 12,589' high mountain at the northeast corner of Yosemite. Noah and I climbed a little of it last summer and more of it earlier this summer, and we want to give it another try before winter. Rob V. (with whom I originally climbed Conness in 2000) agrees to join us.

I pick Noah up from school at 2:30 PM. We discover he's outgrown the hiking boots I got him 2 months ago, so he'll have to use his street shoes. We pick up Rob and get on the road. There's rush hour traffic around Pleasanton, but not too bad.

We arrive in Lee Vining around 8:30, get snacks and a large can of Foster's at the general store, and check in to Murphey's Motel. We watch a high school football game and retire.

In spite of Ambien and a fairly comfortable bed I have an essentially sleepless night :-(

We're on the road at 7:15 AM, stopping at the Whoa Nellie Deli for breakfast as is customary.

We drive to the trailhead at the Sawmill walk-in campground, which is deserted. Another pair of hikers, in a grey Jetta, arrives at the same time.

We're hiking at 8:30. The first couple of miles (more or less flat) go by quickly. My head is fuzzy because of bad sleep. Rob (who's recovering from an A-fib procedure a few weeks ago) reports tired legs but otherwise OK. 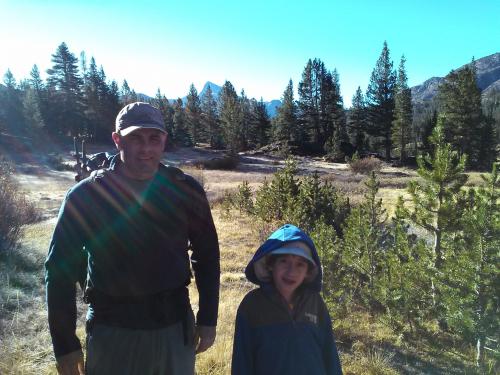 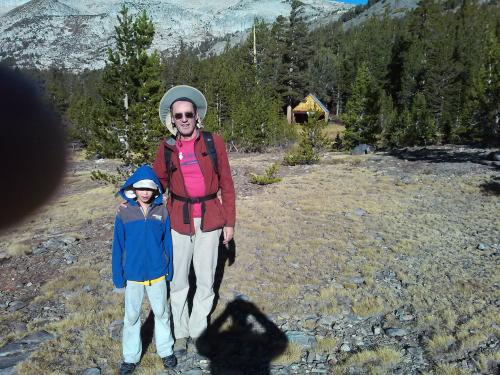 We take a rest at the start of the first uphill part. The couple in the Jetta comes by and asks for directions, which I provide (but I think they ignored them).

We get to the first cliff and climb up the gully. 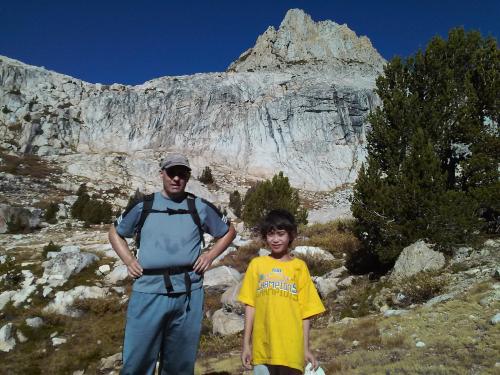 The first cliff; gully at left 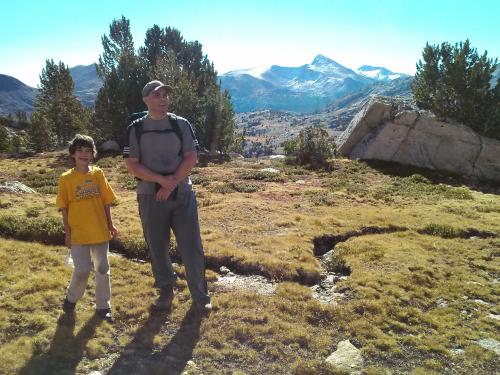 I scrape my left shin on a rock, producing some blood. We cross the plateau above Alpine Lake and climb the slope above it. Everyone's feeling OK and we move quickly. A pair of fast climbers comes up from Alpine Lake and passes us. We arrive at the tiny lake where Noah and I turned around last time. We go around the lake to the left, pausing briefly at 'House Rock', and continuing to the east ridge. 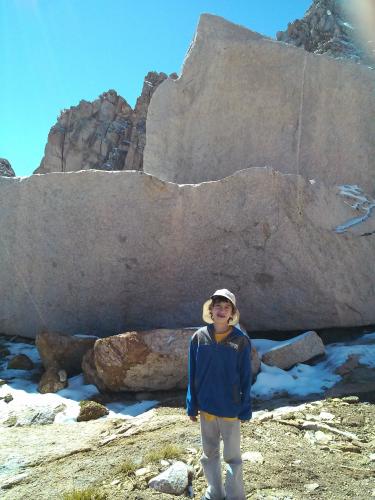 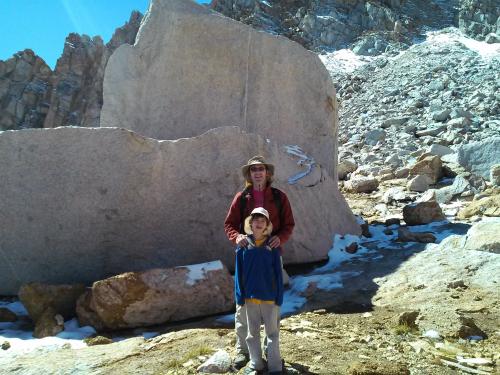 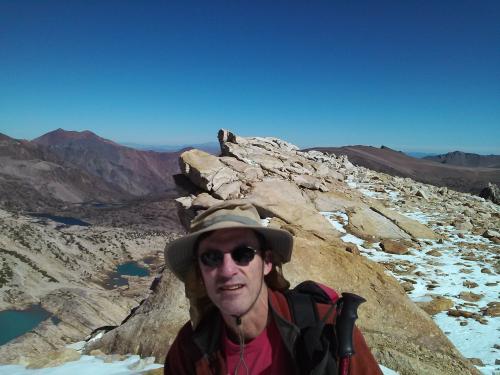 At the east ridge

From here on there's a good smattering of snow. Patches of snow dot the cliff leading from the east ridge to the summit plateau, making it a bit difficult to follow the web of use trails leading up the cliff. We battle our way up, occasionally having to do a rock-climbing move. 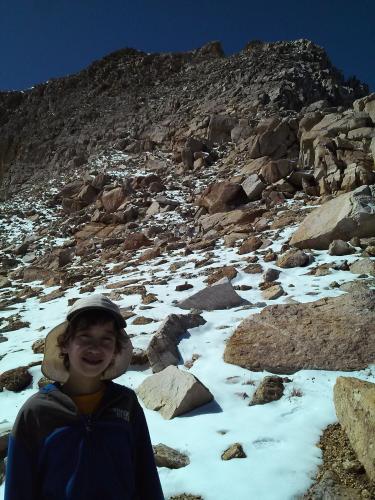 Toward the top it's all snow, which makes the final chute challenging. A party of 2 or 3 is descending; they report more snow higher up. 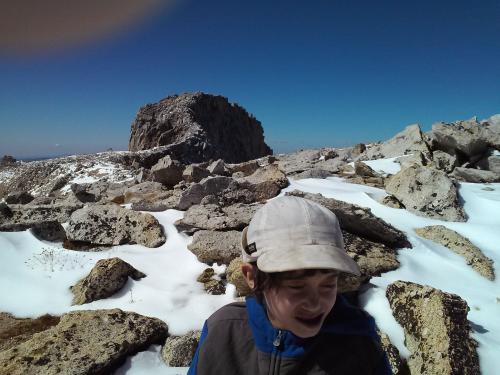 Noah has 2 jackets but is cold. I have a fleece and a shell; I give him the shell. 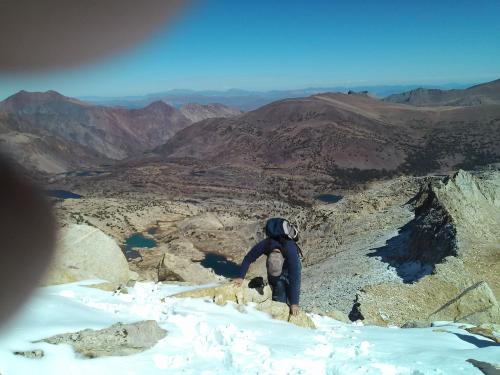 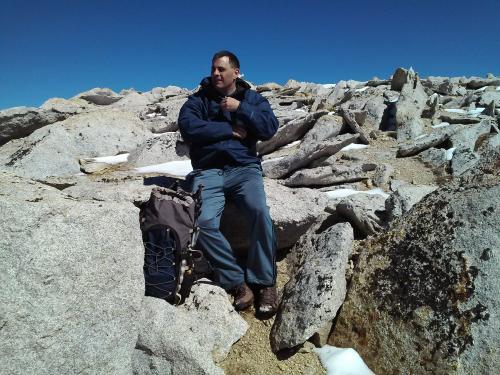 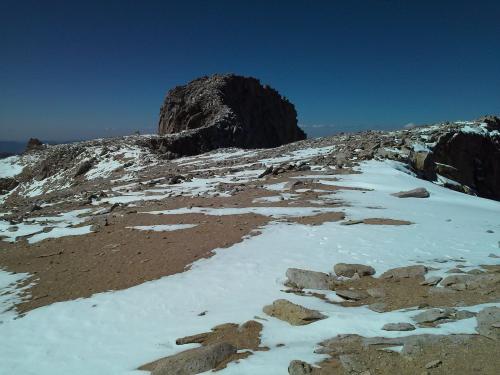 We cross the plateau. It narrows and becomes more snowy as it approaches the summit block. Noah is leery of the steep drop-offs and the possibly slippery snow.

We reach the arete - a narrow rib of rock connecting the plateau to the summit block, with big drop-offs on each side. Crossing this involves traversing a short section of narrow ledge, then doing a climbing move.

Noah takes a look at this and refuses to try it. I cajole him a little - after all, we've done 99% of the climb - but quickly realize it would be a bad idea for him to try, for various reasons - most notably that the snow clinging to our shoes could make them a bit slippery, making the rock climbing hazardous.

Rob graciously agrees to stay with Noah at this point while I make a dash to the summit. At several points on the way there are snow/rock patches even trickier than the arete. I summon up the concentration and energy needed to get past these safely. The summit is very windy; I take a video. 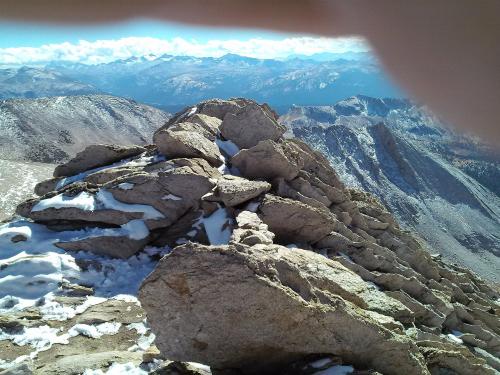 I pick up Rob and Noah and we head down. 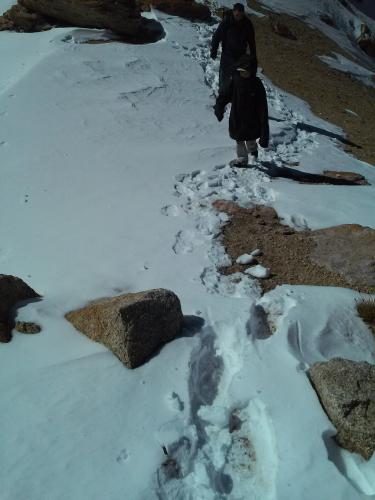 As we reach the cliff, the woman from the gray Jetta couple is coming up. She says they've been wandering all over place, and her partner is probably not coming up. I tell her the summit is 45 min away and try to discourage her. We drop down into the chute; her partner is in fact coming up.

The first part of the cliff is hard for Noah; his hands and feet are very cold, and he's a little freaked out by the snow and steepness. I hand-hold him for a bit.

Clouds roll in over the summit, the east side of the mountain is in shade, and it's getting cold, so we jointly decide to hurry up a bit. The routes-finding is hard; we repeatedly come to places where there's a 6-10' mini-cliff, and we have to either down-climb it or traverse. Usually we down-climb.

At this point I'm tired, and in combination with sleep deprivation this causes my balance and coordination to suffer. Throughout the hike I lead the way - the order is me, Noah, then Rob. So I have to constantly look up to route-find, rather than looking where I'm stepping.

As a result of these factors, I slip and fall several times. One of these is alarming - I land on my side, rolling toward a 6' drop-off, and manage to stop myself just in time. I cut and scrape my hand, with some bleeding.

Finally we make it down to the valley floor. From there the walk back to the car seems to take an eternity. Noah and I independently imagine a fast-forward button that would make time zip by.

We reach the car, pretty beat. We look back at Conness and marvel at the fact that we were able to walk to something that looks so far away and high. The gray Jetta is still there; we're kind of concerned about the couple.

The drive through Tuolumne meadows, as the sun sets, is wonderful. We listen to Spinal Tap and Jimi Hendrix. Observation: when you're extremely tired physically, listening to music is much more intense.

We talk about dinner. Rob proposes the Mexican place in the outskirts of Oakdale, but Noah announces that he wants a cheeseburger and shake, so we pass considerable time discussing the fast-food options, and whether their 'shakes' contain dairy product. Eventually we settle on Wendy's; Noah gets the 'Son of baconator', and I get a baked potato, both of which hit the spot. Noah forgets about the shake, so on the way into Berkeley we stop at Smokehouse on Telegraph and get one to share.

Scrapes as mentioned above, and sprained pinky finger. Everything else feels OK. A little stiff on the drive back, but normal the next day. Rob is pleasantly sore. Noah has a sore ankle, which predates the hike.
Copyright 2022 © David P. Anderson