Like most peaks in the eastern Sierras, Mt. Conness has a split personality. To its south is a broad sandy plateau, accessible via several lush and verdant valleys. To its north lies a hellish landscape of tortured granite, dizzying abysses, and heavily crevassed ice. Rob V. and I have climbed Conness from the south several times. Now it was time to attack from the North.

I put the trip together at the last minute, and hired a guide to lead us on the easy (5.6) but exposed North Ridge of Conness. The original plan was to climb with Rob and Dave Rockower, and for Rich Kraft and Eric Heien to hike separately. But Rick and Dave had to cancel, so I persuaded Eric (who had no climbing experience) to try the climb.

Eric and I drive to the Mono Lake campsite, arriving at sunset. It's warm and totally calm. There's a bit of haze from some forest fires in Yosemite.

We drive to Tuolomne Meadows and climb Lembert Dome. Some climbers are on the fun-looking north face. A hundred yards from the top we leave the trail and scramble up a 3rd-class gully; I want Eric to have a taste of Yosemite granite. The top is fantastic, sort of like the top of Half Dome. We consider walking down the front face but think better of it.

A group is hogging all three bolts on the top of Puppy Dome. We climb a 5.6 route on the lower tier, using the rope of a nice climber named Randy, there with his kid Sam. Eric struggles a bit.

Eric and I are tired. We rest in shade near the parking lot and Rob V. arrives around 3:30. We set up a rope from the top anchor and do the 5.6 face route. Then we drive to the Mobil station and have dinner at its oddly gourmet-ish restaurant. There's some activity on the trapeze.

We get up before 6, break camp, and are at the Mobil station at 7. We meet the guide, Neil Satterfield. We take 3 cars, leaving one at the walk-in campground, and go to Saddlebag lake. To save time we take the ferry across the lake.

The valley fed by Conness glacier is extremely beautiful. We follow a trail (an old mining road, according to Neil) for a half mile, then turn left up the valley, staying on its right slope to avoid a couple of big moraines. 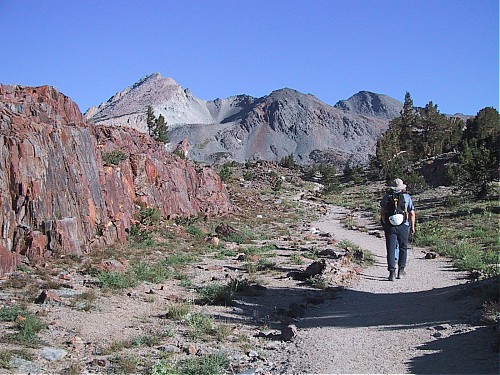 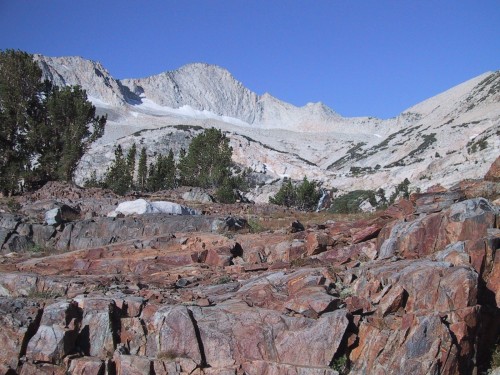 Conness is the rounded peak left of center. Our route: up to the ridge at its lowest point, then along ridge to the summit.
As we climb, the Conness glacier becomes fully visible. A use trail crosses a steep dirt slope and eventually goes left of some big rocks and comes out on the North Ridge, which connects Conness and North Peak.

Neil carries a Canon S100 and takes photos; he'll sell you a CD-ROM for $30. This turns out to be a good deal because he's an excellent photographer and knows all the good places to take exciting shots.

Concentration!
We short-rope along the ridge for a while. The climbing is barely class 3 but there are big drop-offs on either side. Eric is tentative; Neil encourages him to speed up. There are a couple of big downclimbs; the route avoids the spiky top of the ridge.

Finally we get to the 'technical' section, which is just hard and exposed enough that Neil belays us. He sets a series of highly redundant anchors, and has us 'simul-climb' on two separate ropes for speed: Eric on one, Rob and me on the other. I go last and clean gear. 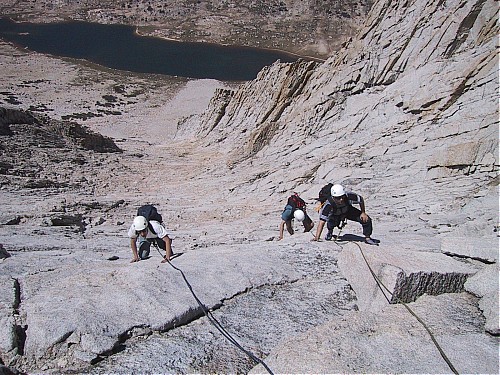 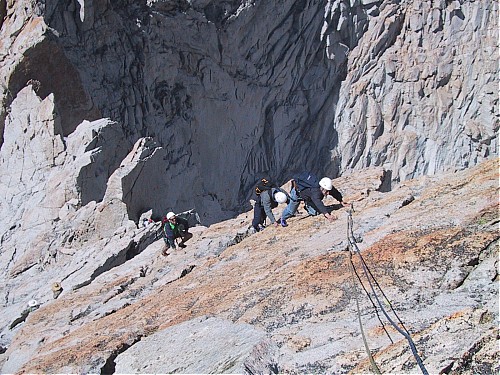 The climbing is nominally 5.6 but that's a stretch. A party passes us climbing solo (unroped). I'd be comfortable doing that. There's one part that involves traversing over a 1,500' vertical drop but the holds are bomber (as we say). 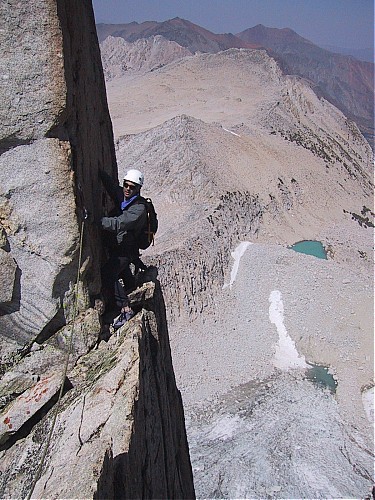 It's 1,500' straight down, so Rob is a little tense
My only problem is that it's windy and I get cold and shiver. Note to self: bring fleece next time. Rob climbs with no problems.

This is Eric's first outdoor climb, and quite understandably he feels a lot of anxiety. This translates into holding his breath, and he gets some dizziness and other symptoms. Neil picks up on this and coaches Eric: 'I'm not asking you - I'm TELLING you to breathe'. This works - Eric makes it to the summit with no incidents. 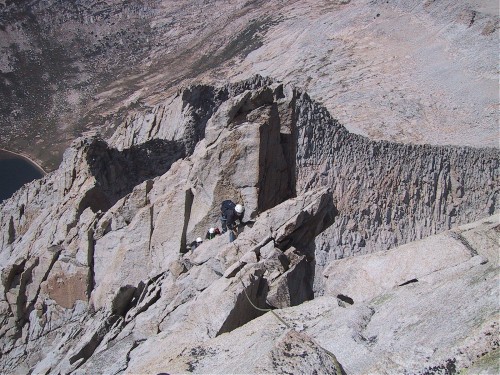 The summit is glorious as always. We sign the register. A recent entry is dedicated to the Rowells. 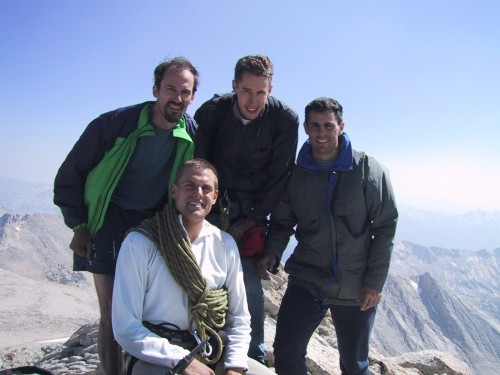 Neil is a second-generation guide 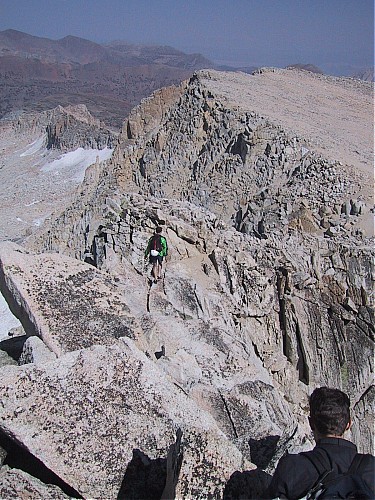 Leaving the summit. I left my climbing shoes on to cross the arete

On the descent, Neil insists on going all the way to the end of the plateau before going down the headwall. I strongly feel that the route that Rob and I use (which goes down the headwall almost immediately) is easier and shorter, but it doesn't matter. 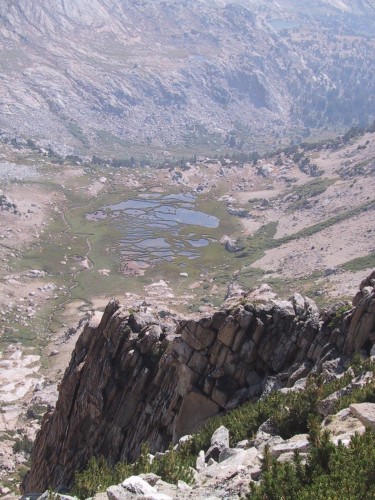 Looking west from the bottom of the plateau. Odd rice-paddy lake.
The descent down to the flat part of the valley, as always, is the hardest part of the day, and the final trudge to the walk-in campground seems to take forever. 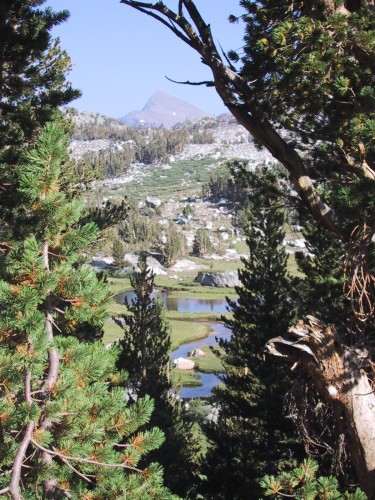 Mt. Dana looms in the background 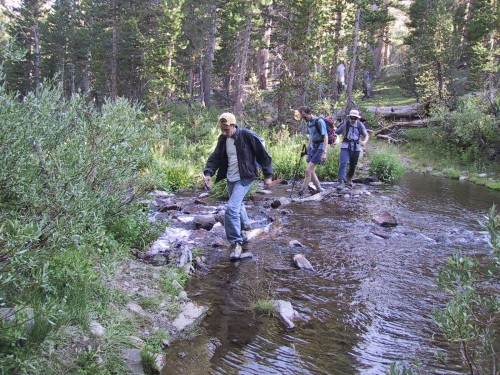 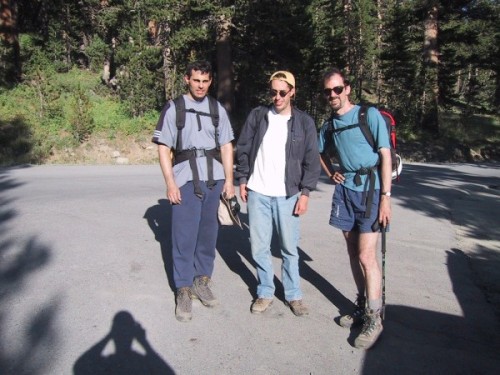 Rob and I are done; Eric has one mile left

Eric gets a second wind and, making good on his promise, actually runs a mile from the campground up to Saddlebag lake, an impressive display of youthful energy.

We say goodbye to Neil, stop at Tioga Pass Resort for much-needed drinks, and drive home, stopping at the Mexican restaurant in Groveland (OK, but no patch on "Tekuila's" in Oakdale).

Nothing except all-over soreness.