As most of you know, I often climb Mt. Diablo around my birthday - to celebrate the day, and to measure my physical decline. I skipped it last month because I was significantly fatigued, and had been so for a year or two. Since then, I started using a CPAP machine for my sleep apnea, and my energy returned.

So I figured I'd give it a try. Plus, it was the day after Thanksgiving and I was bloated after a great dinner at my sister Rachel's house. Rob was playing golf and Emily was shopping, so I went alone.

I was on the trail at 10:45 AM. I wore my mountaineering boots, which worked well. It was sunny and in the upper 60s. It had rained a few days before, and the air and ground were slightly damp. In other words: a perfect day for hiking.

Since I'm out of shape I knew I wasn't going to set a speed record, but I wanted to be quick. I set a moderate pace: quick but not long steps. On the steep parts I throttled back a little. I monitored pulse, breathing, and lactic acid. I was mostly limited by pulse; I kept it around 140.

I tried to take some selfies, but when I tried to press the virtual button (on the screen, facing away from me) I kept pressing other things instead, and entering various weird modes, apps, and control panels. I intensely dislike my phone. 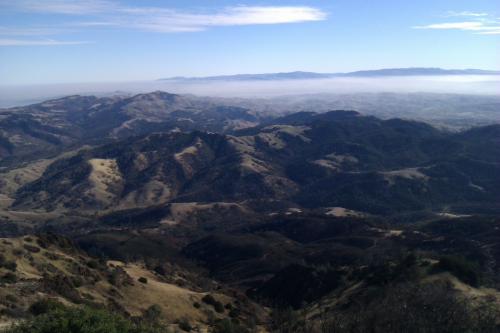 View from the top. Picture does not do justice.

I rested 25 min at the top, ate some left-over eggplant/chicken curry, and started down. I noticed that a lot of manzanita and other trees had been burned in the fire last summer.

I came up behind an old guy, who sped up. Then we came up behind some slowpokes, and I passed everyone. Then I heard the old guy right behind me. I sped up, and after a while he dropped back.

I had faint twinges of sciatica on the way up, and it flared up on the way down, sending little jolts of pain down the outside of my left knee. I could keep it in check by going slowly, maintaining posture, and avoiding shock on the left leg. The descent took 2:25.

Injury report: I felt fine except for the sciatica, which continued that evening and the next day.