Hiking on a moonlit night has a certain appeal. It appealed to John Muir when he impulsively set out after dinner on a 20-mile jaunt to Cloud's Rest and back, returning in time for a full day of his chosen occupation (what was that exactly?).

Last night there was a partial eclipse of the moon around 3 AM, and the leader of my favorite Meetup hiking group, Chris J. from Walnut Creek, organized a hike in the High Sierra, starting at 1:45 AM, with the goal of viewing the eclipse from atop Castle Peak. I decide to go.

In the afternoon, I hop in my car and drive to Sacramento, where I have dinner and visit with my Uncle Don and Aunt Gayle. The drive from their house to the trailhead takes about 1:45, so I leave their house around 10:30 PM, planning to kill an hour in a WiFi-equipped MacDonald's (I have my laptop with me).

Unfortunately, I-80 heading East from Sacramento seems to be the longest MacDonald's-less stretch of interstate highway in the free world. To be precise: there is one, but by the time you see it you've already passed the exit.

Soon it's 11:30 PM and I realize that, in my obsession with WiFi, I've ignored the fact that I'm pretty hungry, everything is closing, and I have little food in my pack. I get off the highway in Colfax, which I know for a fact has a MacDonald's, but it's closed. Fortunately a gas station store is open and I get a Big Azz Chicken Sandwich (terrible but filling). I park outside the Starbucks, which is closed but their WiFi is still on, and process some emails.

I arrive at the trailhead a bit early, and the others (Chris, Gina, and Cathy) arrive soon. The moon is indeed full and brilliant, but unfortunately clouds are sweeping past it, werewolf-style. After a few minutes heavy clouds roll in, and we never see it again! However, enough light filters through the clouds that I can see the trail OK.

We hike up the Pacific Crest trail to Castle Pass, then veer right up to Castle Peak. The trail is a mixture of choppy snow and mud. 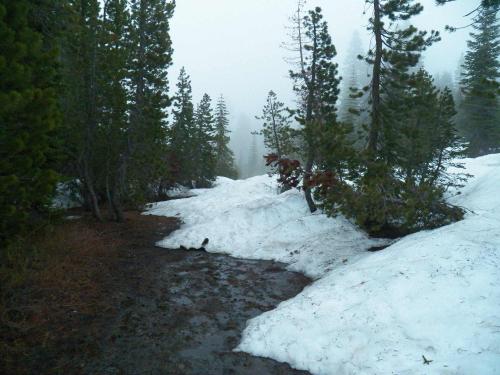 Trail on the way down, after it got light

The other hikers all have super-bright LED headlights, whose harsh monochromatic glare wreaks havoc with my night vision. So I lag about 50' behind. The experience of being in a vast dark landscape is indeed intoxicating. I feel like a nocturnal predator - part of the landscape rather than an observer.

As we get higher, we enter the fog, and my glasses get fogged up. Also it gets colder - maybe low 40s. Also the wind picks up considerably, like about 45 MPH. Also we're walking pretty close to the cliffs that surround Castle Peak. It gets darker, and I turn on my headlamp but it emits only a faint, useless glow (dying batteries).

This adds up to a pretty nasty experiential gestalt. Now if you read a lot of these trip reports, you know that I actually really enjoy situations like this. However, Gina is hating it - the wind is knocking her over, she's physically struggling, and she can't deal. So Chris decides to abandon the ridge and head straight downhill, on a steep but manageable slope that's a mixture of dirt and snow. Gina has never used poles, but she gets a crash course because that's the easiest way to go down the snow.

This is a very soggy time of year because of all the melting snow. We reach some meadows at the bottom and there's a lot of mud, the slurpy kind that tries to suck the boots right off your feet. We shift to the snow that surrounds the meadow, and climb back up a couple hundred feet to Castle Pass (a spot on the PCT marked by giant cairns). By this time it's getting pretty light, and the walk down the trail to the cars is a lot easier than on the way up. I chat with Gina, who turns out to be a bartender and huge SF Giants fan.

On balance, the hike is a lot of fun. The total is about 7 miles and 2,200' vertical. I feel great physically. My only regret is that I used about $45 worth of gas getting there and back.