Fly Oakland - Denver. Ron tries to pick me up, but bizarrely, though he describes exactly where he is, he's not there! Turns out that Denver has two separate arrival levels.

Gedye arrives somewhat later, so Ron and I go to an African restaurant in a strip mall near the airport. The food is good but extremely slow - over an hour. A large TV shows non-stop twerking.

We pick up Gedye and drive to Estes, where we stay at a motel; the condo isn't ready. By now it's 11:30 so we retire.

I eat left-over African food for breakfast. We stop at the Safeway near the Stanley Hotel (the only grocery store in town, it seems) and get lunch stuff, including one of those enormous Italian subs that can feed a large family.

We drive into the park, using my new senior-citizen American Eagle pass. We do the Lumpy Ridge Loop: 12.5 miles and 2,000' vertical. The altitude (7,000) is noticeable. The loop goes around a group of large granite outcrops. 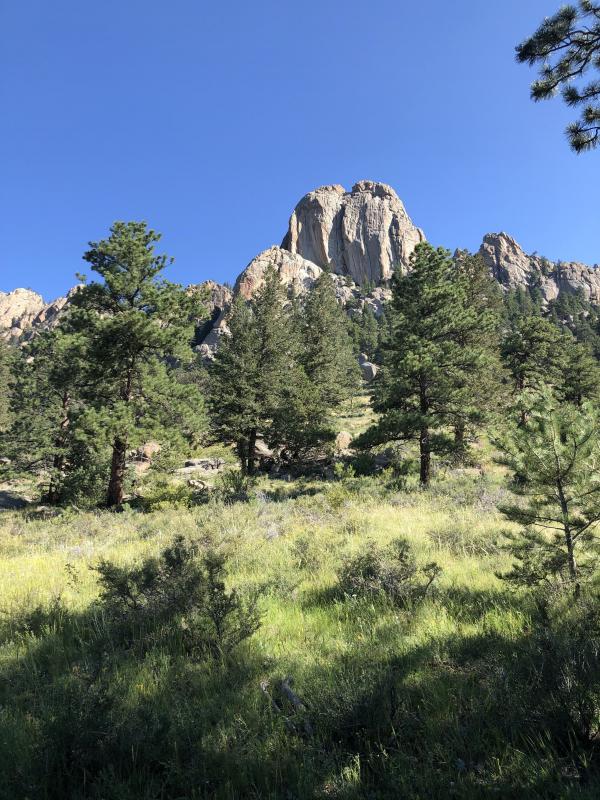 The first part goes through beautiful meadows with lots of wildflowers and birch trees. 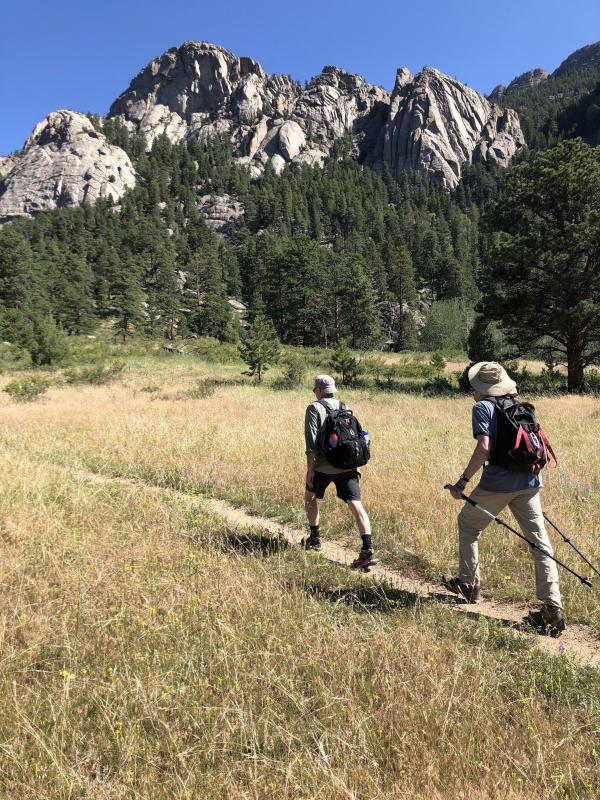 A butterfly falls in love with my sweaty hand; hard to get rid of her. 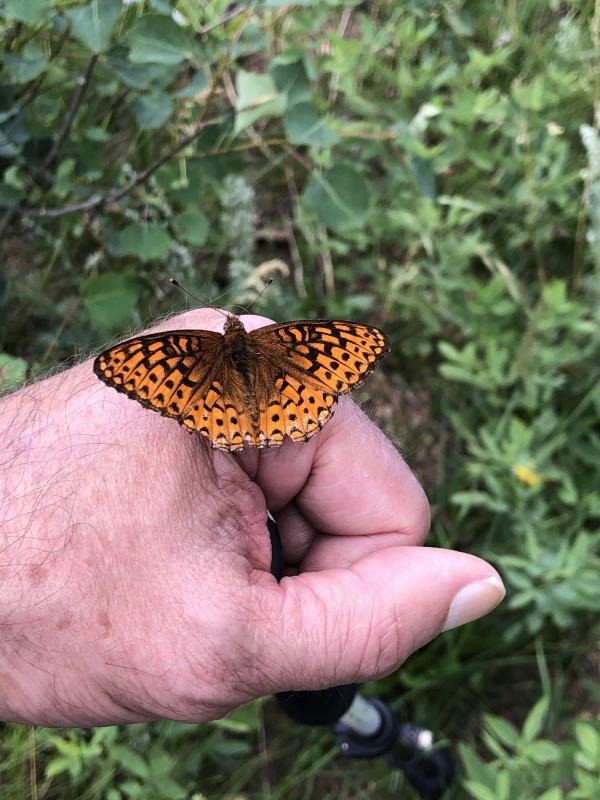 The trail ascends the shoulder of the ridge, and all of a sudden we're at Gem Lake, a small tarn set in an amphitheater of reddish granite, which is so striking it seems almost artificial, like something from Disney World. 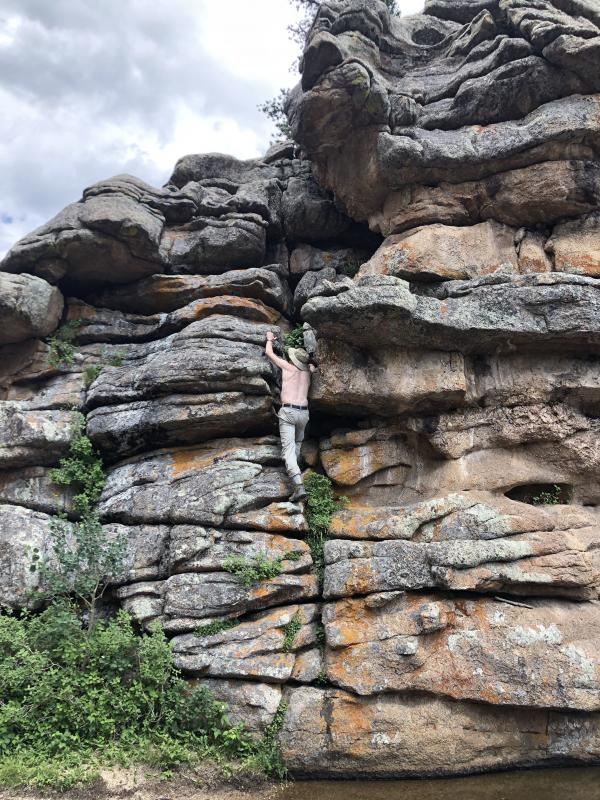 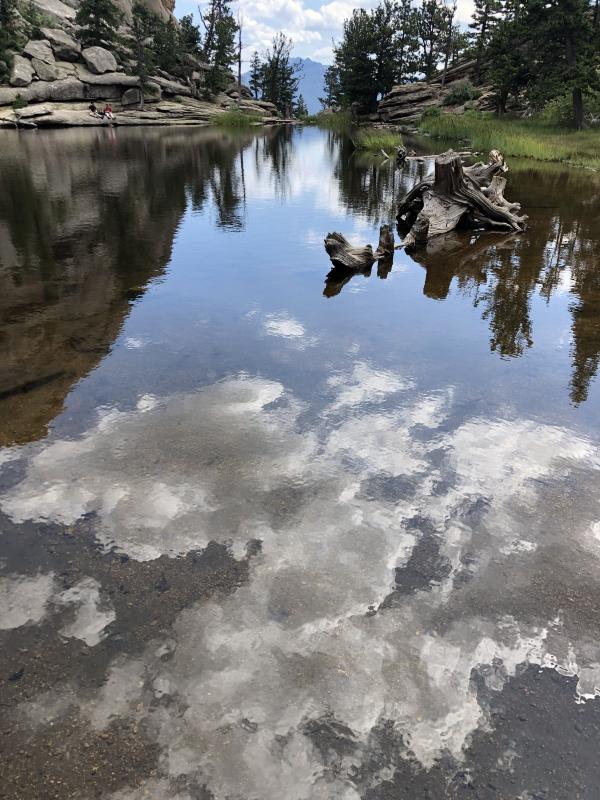 We wade in the lake but don't go all the way in because there are leaches.

From there the hike is crowded and goes steeply downhill to the parking lot. 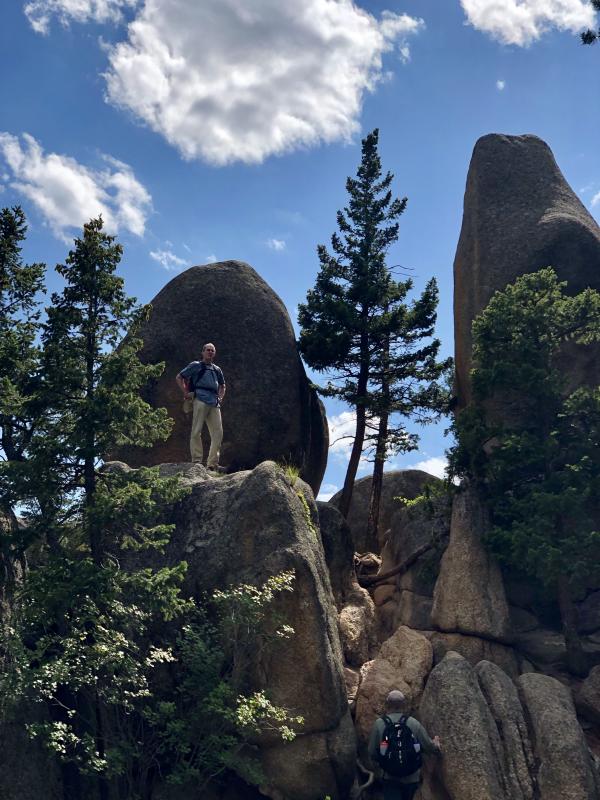 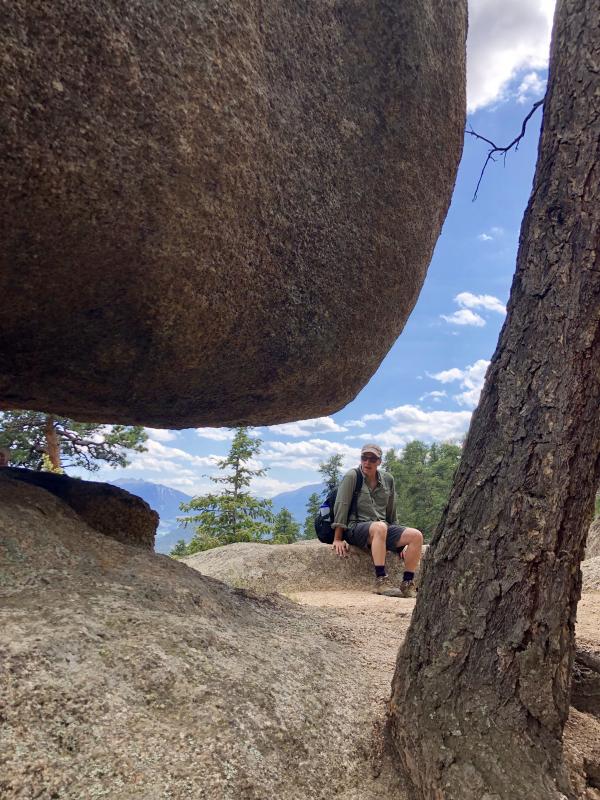 I feel basically OK after the hike, which last 7 hours (9 to 4). My recently-painful achilles doesn't cause problems. My feet hurt a bit, and I'm pretty tired and sore all over; my body isn't used to exertion of this duration.

We return to the Safeway (insanely crowded) and get fixings for dinner ("Beyond Burgers", salad, and beer) and breakfast (24 eggs, sausages, English muffins, etc.).

We sit in the Jacuzzi for a while and I tell the story of the Antikithera Mechanism.

Ron and Dave discuss the Washington Monthly, for which Grace is currently writing.

I have a completely sleepless night, maybe because my pulse rate is high from the day's exertions.

The weather forecast is for thunderstorms around noon, so we get up at 5:30 and get an early start, (though not as early as one might hope). This is compounded by some navigational issues. 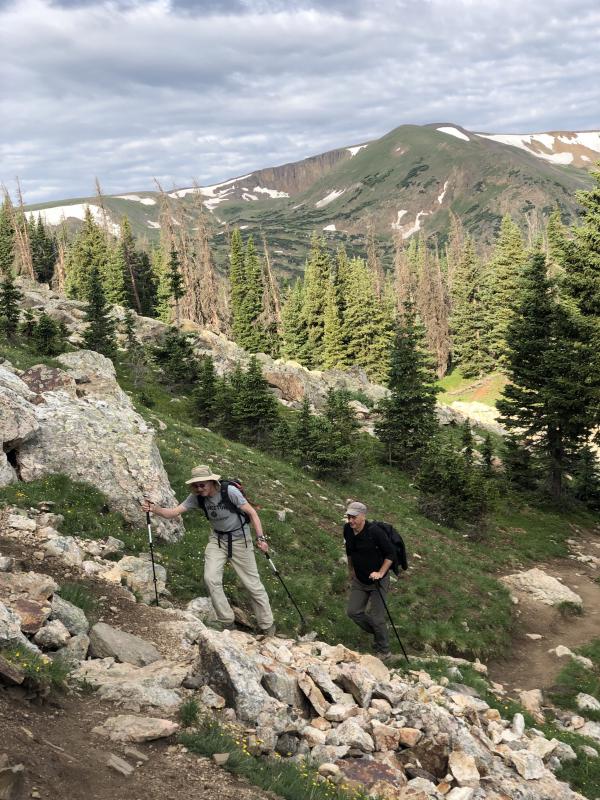 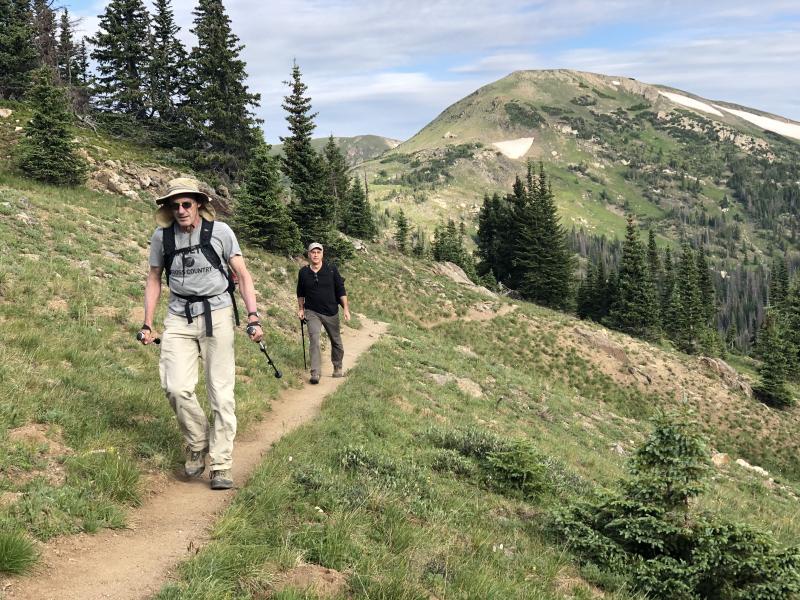 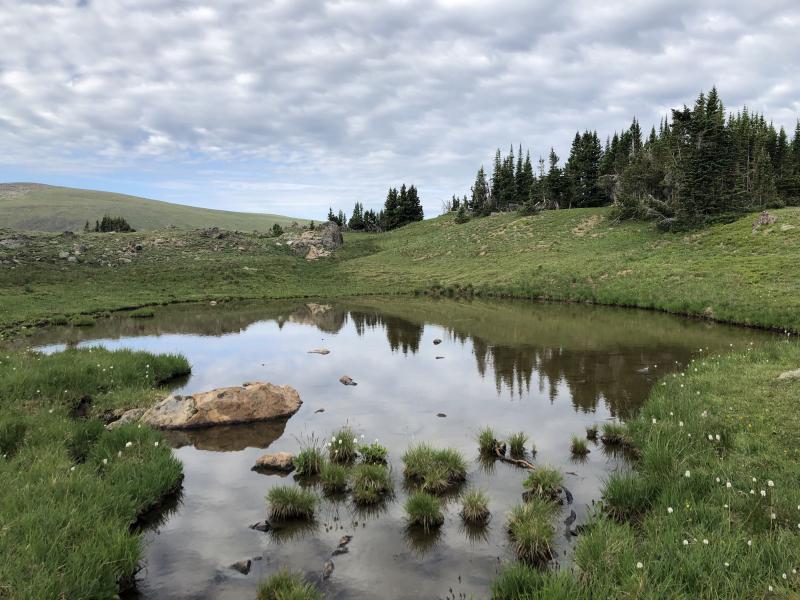 The trail soon leaves the treeline and goes along the edge of a plateau with several peaks: Chapin, then Chiquita, then Ypsilanti. 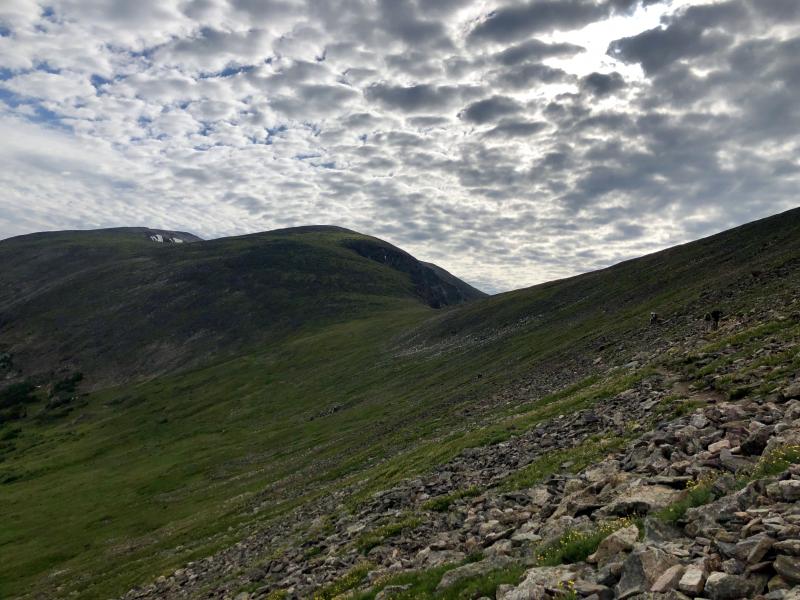 Chiquita is just left of center

The altitude doesn't affect any of us much, though the unrelentingly steep trail is certainly a big effort. I discover a new way to stretch my spine: hook my toes under a fixed rock and pull at an angle through the whole body. A couple of vertebrae pop and spinal pressure is relieved.

We pass and chat with a couple from FLA who have been RV'ing for 5 months, and don't look in shape but in fact are. 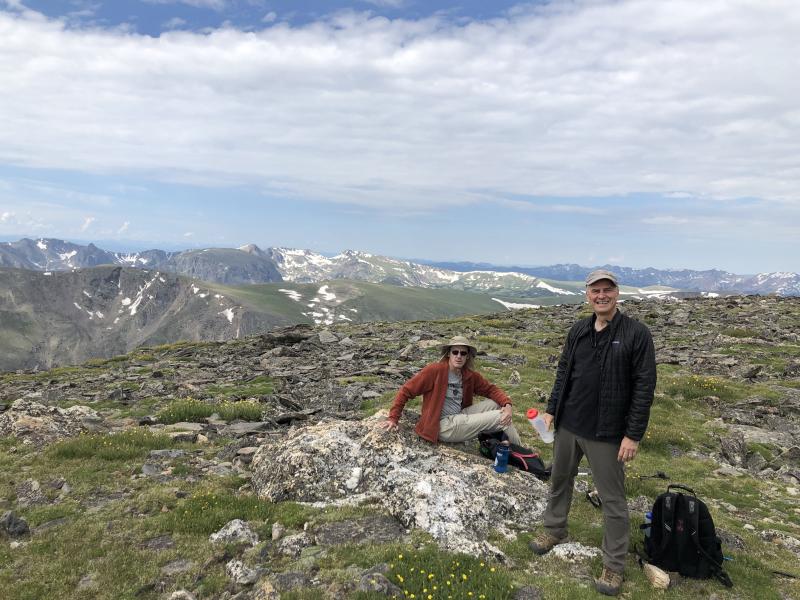 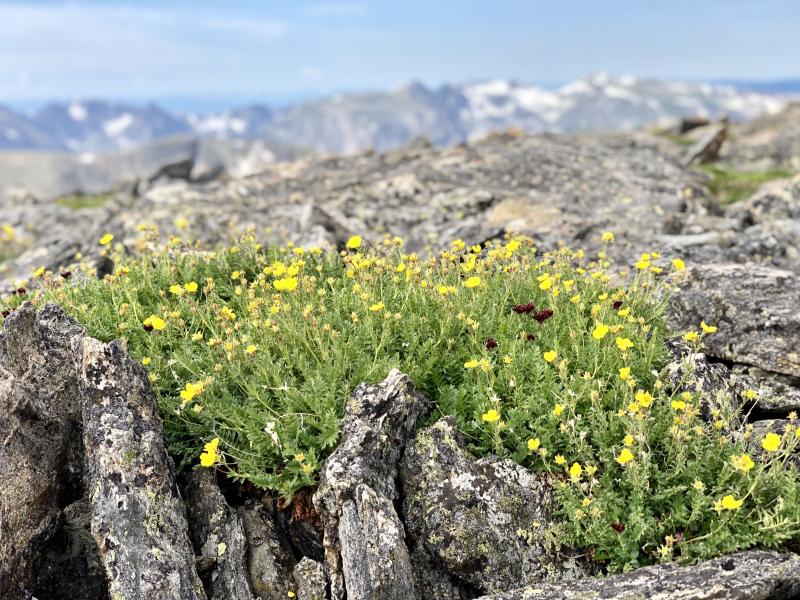 A marmot tries to get into Dave's pack, and removes the rubber tip from the Camelback tube thing. 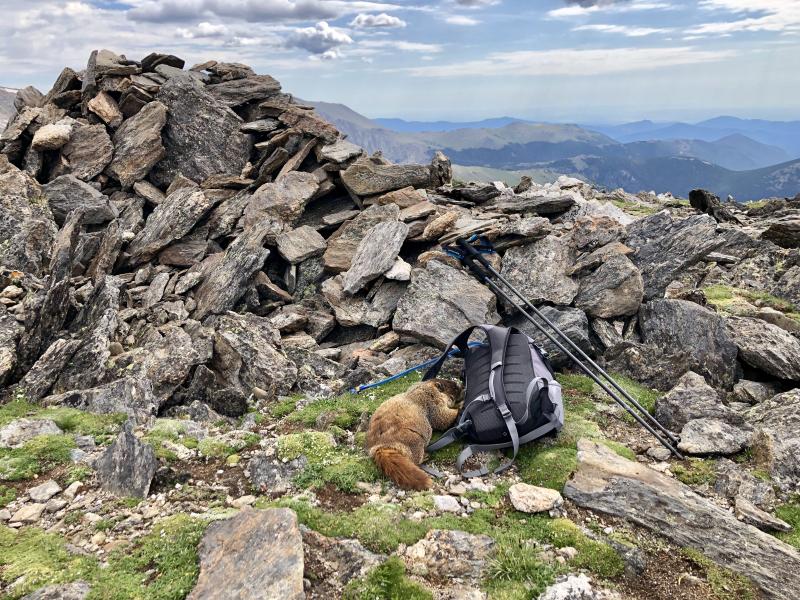 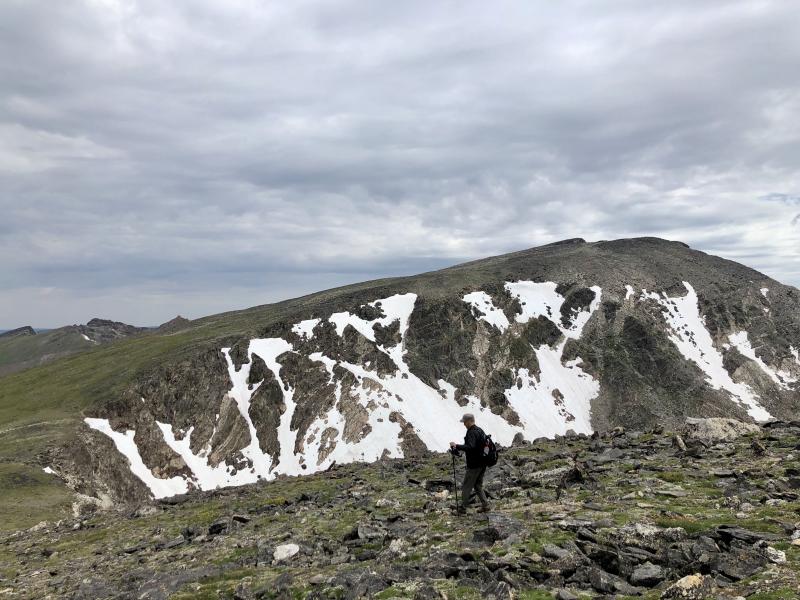 Mt. Ypsilanti in the background 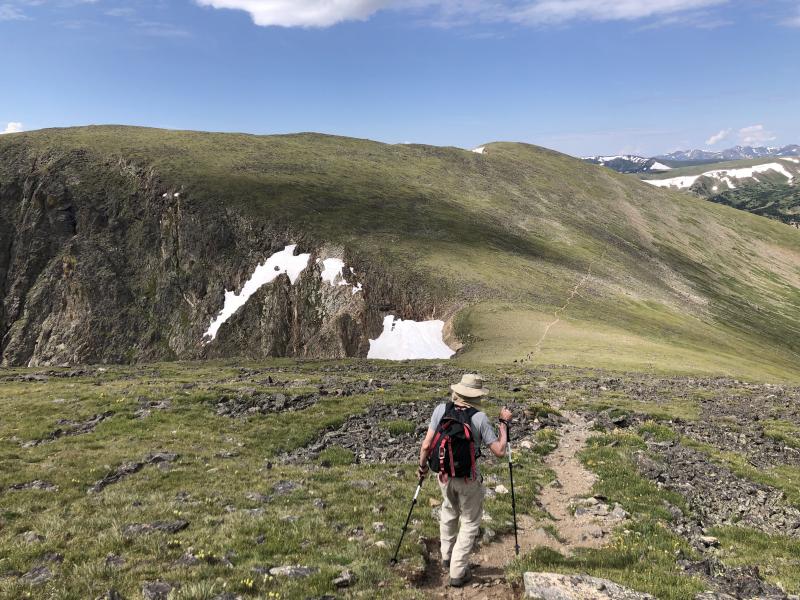 In the snow-filled notch below Chapin peak there's a large mountain goat. People approach him to take pictures; he sits in the snow, not paying them any attention. 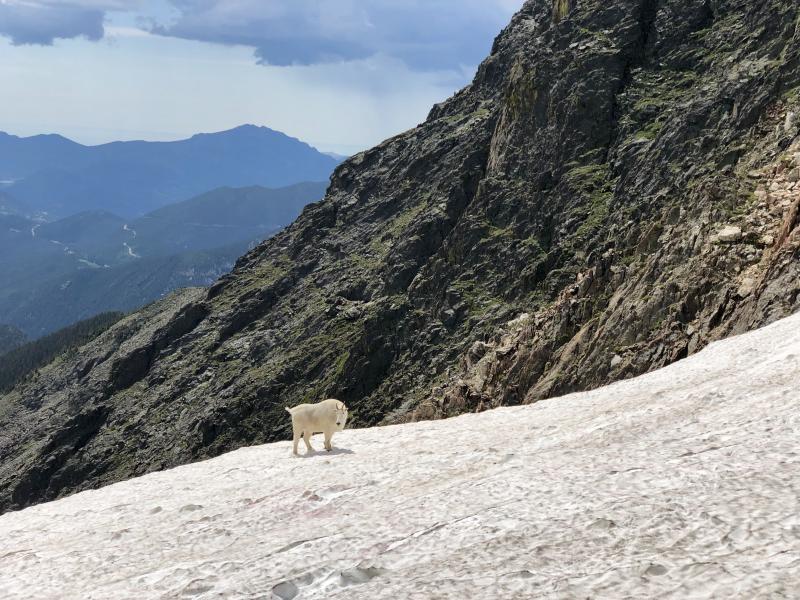 We descend by a lower trail that is less rocky. 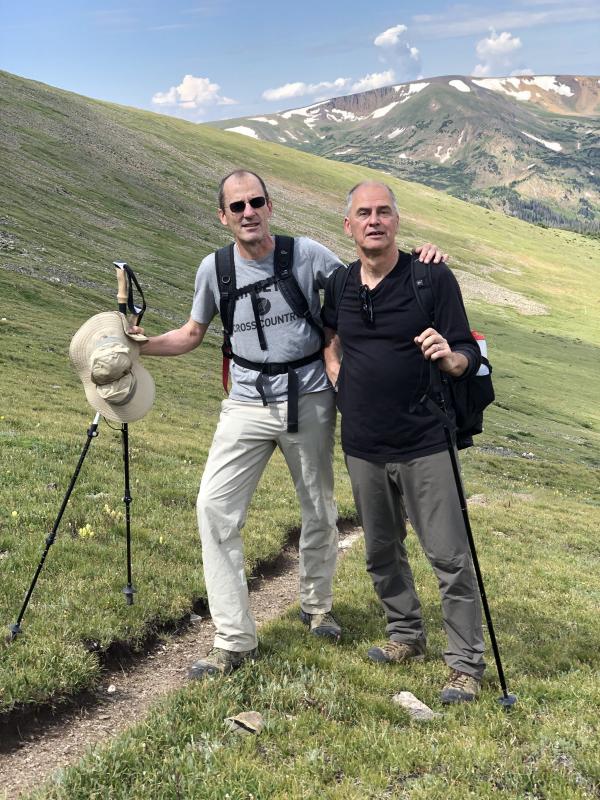 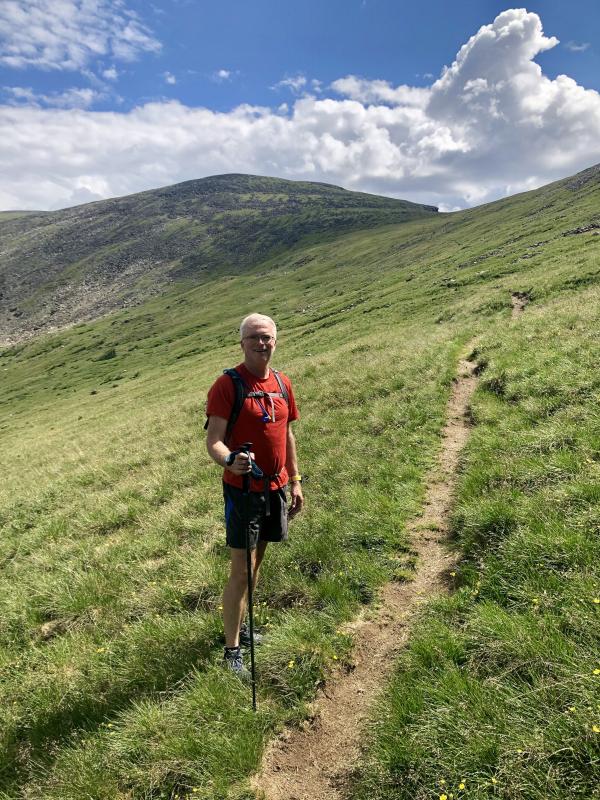 Ron and Dave look at the sea of pines in the valley below, most of them dead from pine beetle, and observe that new trees are growing above the old tree line, presumably because it still gets cold enough to kill the beetles up there.

We get back to the car. I feel good; a little soreness in left hip flexor.

We continue up the dirt road to the Visitor Center, which is situated at a high point (11,000') in the park. There's no soft-serve ice cream-like product.

Chatting with a ranger, Gedye tells them about the goat we saw. They insist it must have been a big-horn sheep, but he gets his phone and shows them the pic. It turns out goats are banned from the park - they spread disease and drive out the sheep. So they anesthetize the goats and carry them out on mules (or helicopters in extreme cases). The ranger (Andrea, or "Dre") announces that they must enter the "Goat Protocol", and takes Gedye into a back room.

After quite some time he emerges. Apparently they were having computer problems and were unable to locate the Goat Protocol, which is kept online somewhere. They did download the picture from his phone.

Dark clouds roll in and rain begins, with a few distant lightning strikes. 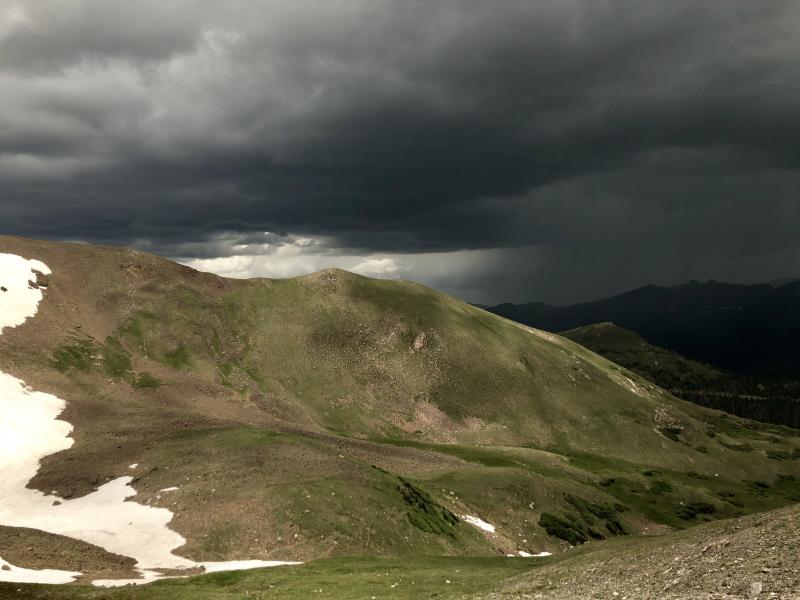 We drive back to Estes - slowly, because there are too damn many cars and people so everything is slow. Downtown Estes is a tourist-infested nightmare.

We go back to the condo and veg out a little, then drive to the excellent outdoor sporting goods store, which has its own mini climbing gym (I climbed there on a previous visit). 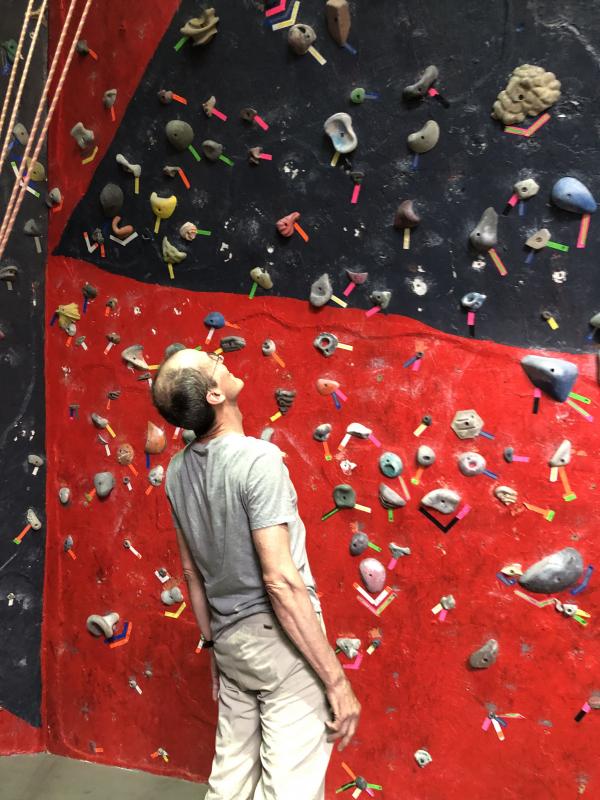 I look at some non-cotton shirt options but don't buy.

We stop yet again at the Safeway (which is a friggin' madhouse) and buy fixings for dinner: penne pasta with chicken, and a salad which is an upgrade from yesterday's overdressed salad. Gedye insists on sauteeing mushrooms for the salad, which I initially resist but actually they're better that way.

We drive toward the Bear Lake trailhead but are forced to stop at the Park and Ride at 7:30. There's a long line for the shuttle, which doesn't start that early. We decide to hike directly from there, and a motherly ranger suggests a hike ending at a shuttle bus stop, and gives us a map.

First stop is Bierstadt Lake (named after the painter). The trail goes over a large burned ridge and descends to Cub Lake, 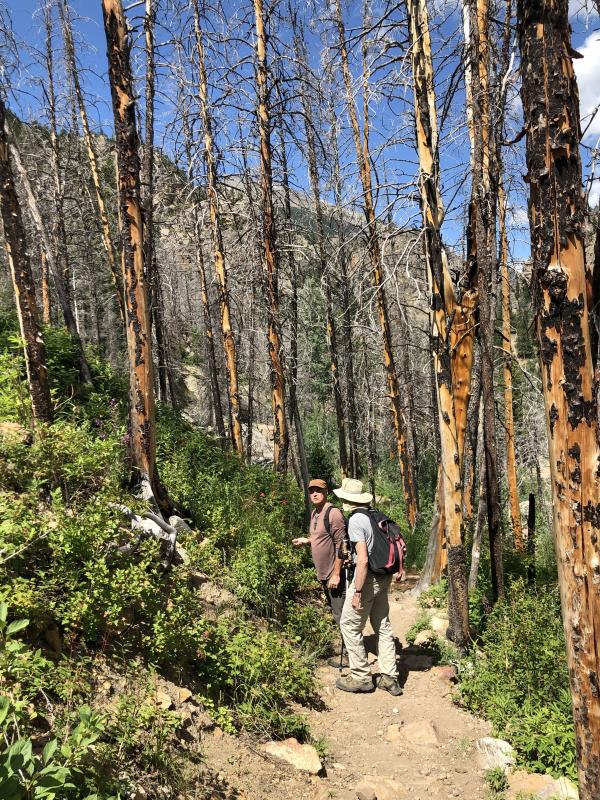 which is filled with lily pads. We enjoy our turkey/cheese sandwiches by the lake. Gedye takes too friggin' many photos of lily pads. 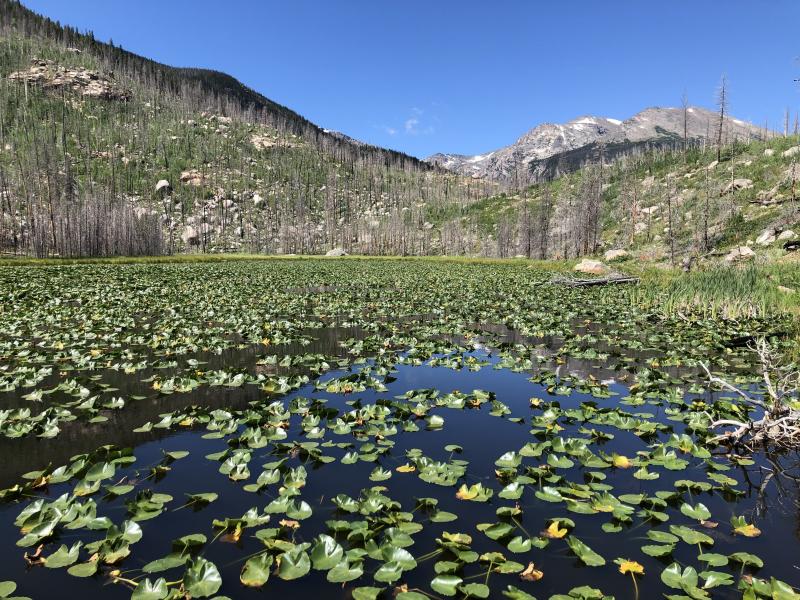 The trail goes uphill a mile or two to Fern Falls, where we stop and enjoy the mist.

We descent to the Fern Lake shuttle stop, passing a number of large climbable boulders. 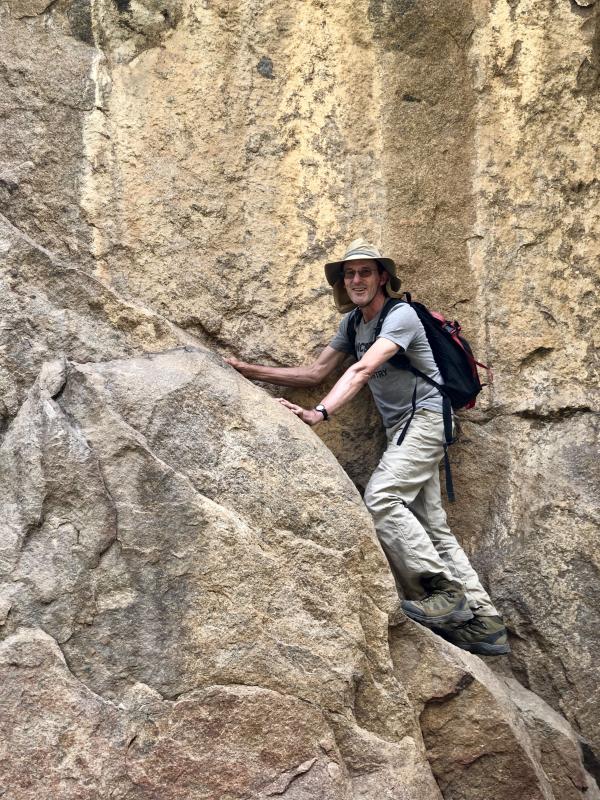 It starts to rain as we wait for the shuttle.

Back to condo, rest and shower. We research on brewpubs and end up going to Smokin' Daves (because of the name). Recommended; good IPAs.

We go to a nearby theater to see "Once upon a time in Hollywood": entertaining but not great. 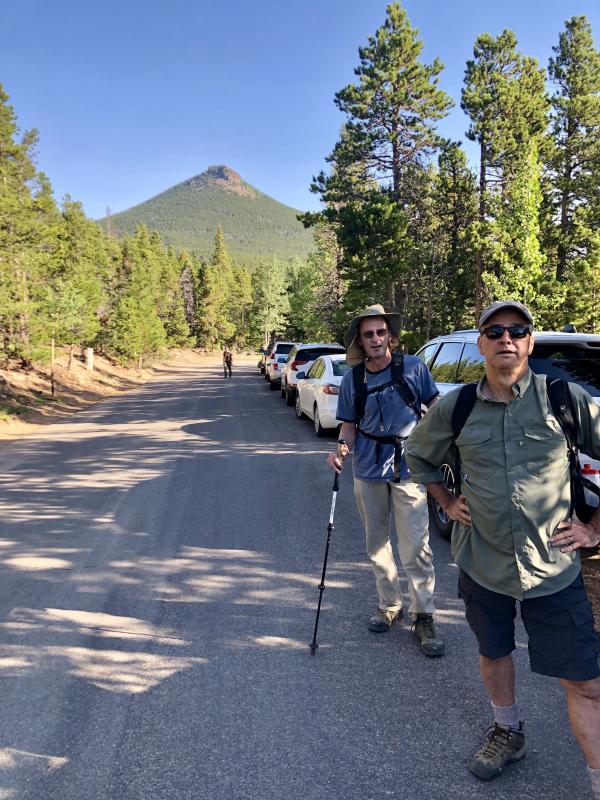 I'm feeling lethargic and lag behind the others. 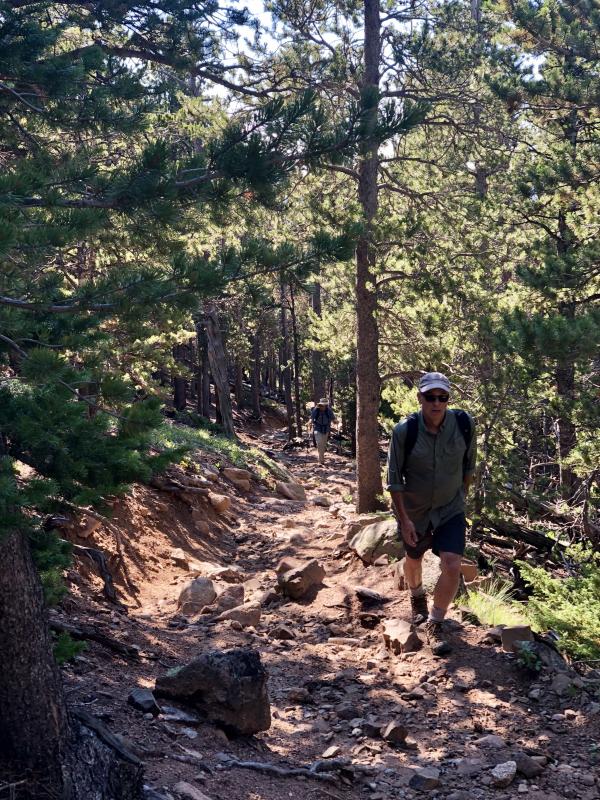 A park ranger and video cameraman stop us on the trail and interview us for some kind of park documentary. We say good things but in retrospective should have said bad things (too damn many people already). The cameraman tells us his son went to Wesleyan and got in trouble for sexual misconduct. TMI.

The last mile is nice and steep; no switchbacks. 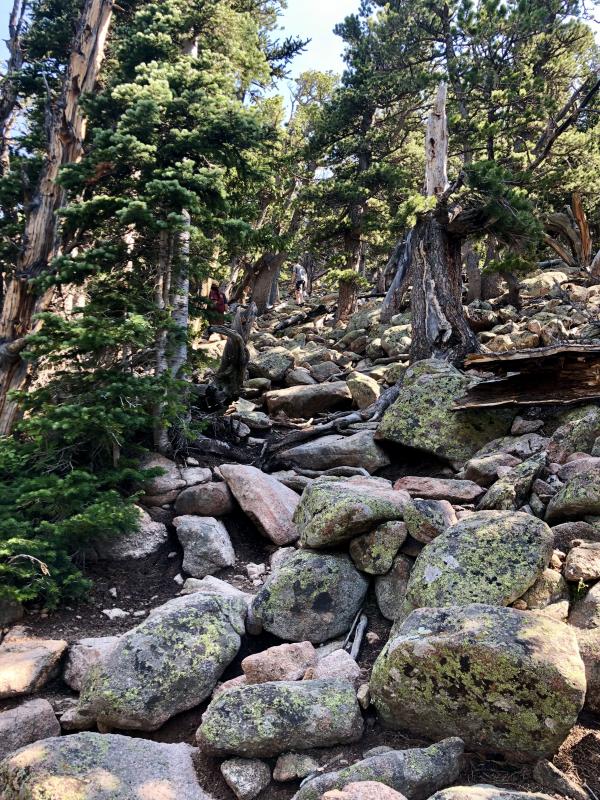 We chat with a pair of precocious sisters, 7 and 10, near the summit. One of them has a Yale T-shirt. There's a small scramble to get to the summit, which has impressive 360 degree views. 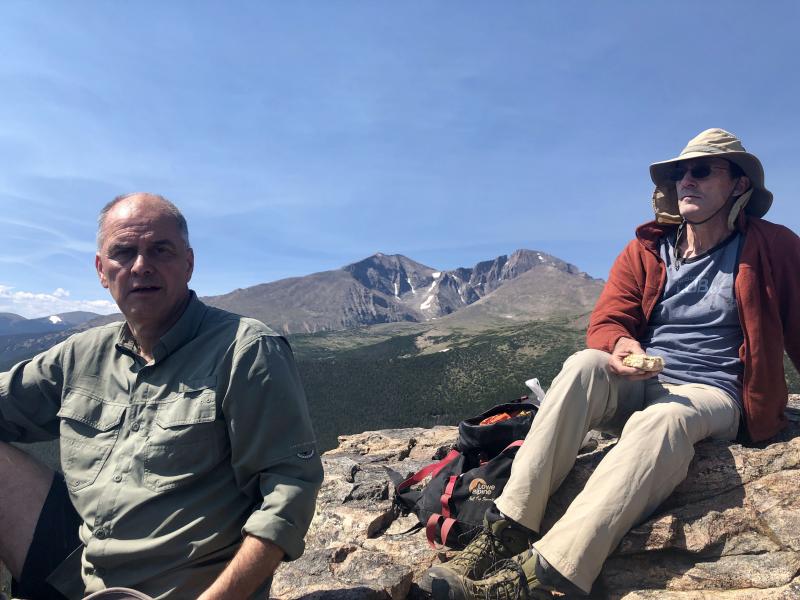 Gedye needs more exercise, so he runs down via a longer route to Lily Lake, where we pick him up later.

Ron and I have a leisurely walk back and discuss the sociology of open-source projects.

Ron and I visit the Rocky Ridge Music Center, where I introduce myself to Jon Bee and discuss plans for tomorrow. It doesn't start until 1:30PM but I can get there at 8AM and hang out. It's a groovy-looking place: lots of rustic buildings, in the forest at the base of Estes Cone.

Music camp: the first day is a waste. I get there at 8:30 AM but nothing happens until late afternoon.

The camp attendees include ~50 string players and 3-4 pianists. The structure of the camp: there are six 90-minute sessions per day: 3 assigned (they pick the group) and 3 free (you pick the group). The group with piano may be trio, quartet, or quintet. In each session, someone picks 2 or 3 pieces from the library, and the group reads through them.

There is no coaching, and generally no working on pieces (e.g. practicing the hard parts).

People want to play the Romantic standards: Brahms, Schumann, Mendelssohn, Faure, Dvorak. A little modern (Shostakovich), a little older (Haydn). Most of these pieces have very hard piano parts, which I haven't seen before, so I do a lot of high-stress sight-reading.

On the last day there's a public concert. A chamber orchestra plays Vivaldi and Holst. A violin/piano duo plays Brahms. Eitan, Anthony and I play a the last mvt of Brahm's 2nd trio (featuring the Simpsons theme). This has a hard piano part; I spend my free time simplifying and practicing it. Our performance is pretty good, although I lose my place in the middle and scramble to synch up again.

I have a private cabin. The mattress is uncomfortable, and 3 of the 5 nights (including the last 2) are sleepless. This heightens my stress level and exhaustion.

Eitan, Jenny and I had planned to climb Longs Peak the day after the camp. But Jenny has altitude issues and I'm not feeling great, so we downsize to a hike in RMNP. We get up at 5 AM in order to get to the trailhead parking lot at 6:15; it's already almost full.

We do a wonderful hike to Sky Pond and various other mountain lakes. Near the top, Eitan and I leave our poles by the trail. When we return, Eitan's are gone! WTF?? He runs back up the trail to look for the thief, but no luck.

Soon thereafter we're at the base of a waterfall. Two photographers with tripods are taking pictures. Eitan and I scramble up some rocks by the waterfall, and one of the photographers starts yelling at us to get out of his picture. Eitan diplomatically explains that national parks are for everyone; the guy leaves in a huff.

We stop in Estes for ice cream, then drive to Eitan's parents' house in Denver. His sister is getting married next month, and there's a project involving the chuppah: specifically, making bases to hold the poles, using PVC pipe and large plastic planters. So, after going to dinner (sushi) we go to the Home Depot and buy two 55-lb sacks of concrete mix. I mix the concrete, Eitan uses hot glue to hold the PVC assemblies in place, then I pour in concrete. The whole thing is a lot of fun and I think it will work well.

The next day we get up early and drive to the airport. Nearby is an enormous sculpture of a rearing horse with luminous red eyes; when near completion it fell on and killed its creator.

I have a long wait for my flight. When I get back to Ashby BART I try to take a Lyft to my house, but fail because Lyft's idea of the location is on Adeline, which is not actually where the station exit is. So I walk home.