My yearly trip to Europe (in this case Grenoble): the BOINC workshop, some hiking, and general change of scenery.

I'm awakened at 8, and am on the BART to SFO at 9:15, in plenty of time for my 13:00 departure. My itinerary is Geneva via Heathrow, then the train to Grenoble.

Everyone gets on the 747 (United). We sit. The pilot comes on the intercom and, barely audibly, mumbles something about a 'maintenance issue'. We sit at the gate for 2 hours; the Maintenance Issue prevents turning on the AC, so it's a bit sweltering. Finally the plane moves, taxis for an eternity, and lumbers into the air at 15:15.

My connection in Heathrow is 2 hours, so it's likely that I'll miss it. Worst case is I miss the last train to Grenoble and have to get a room in Geneva.

The flight is 10 long hours - ugh. I've brought 2 books - 'Mao II' by Don DeLillo, and a trashy sci-fi novel. I read the latter, but it's so bad that by the end I'm skimming.

We land at 8:30; the Geneva flight is 9:00. To United's credit, the delay is handled well. At the arrival gate, an agent hands me a boarding pass for the 14:00 flight to Geneva and a L10 voucher for lunch.

I try to make the 9:00 flight but there's no way - there's a long passport-control line, another security checkpoint, and a mile or two of walking. So I settle in at departure lounge, which at least has some power outlets, and WiFi which is free for the first 45 min. I check the train schedule, and to my relief there's a 18:42 train, well after my 16:44 arrival in Geneva.

I get a sandwich and beer at a pub-type place. The cashier - animated, Polish, with highly arched painted eyebrows - insists that I get something with the remaining L2.45 on the voucher; we settle on a chocolate muffin. I feel like hugging her - during travel ordeals, small acts of human kindness loom large.

After that everything goes smoothly. I have 2 hours to kill in downtown Geneva. I've spent a lot of time there, and every time I turn the corner there's a delightful 'click' of recognition - hotels where I've stayed, restaurants where I've eaten. Geneva doesn't change much, which I like.

I have a small mission, namely to get a US/Euro AC power adapter, which I neglected to pack.

I have dinner (pasta Bolognese and beer) at a sidewalk place on the pedestrian mall next to the train station. Not only is the food surprisingly good, but the people-watching is unsurpassed. It's all locals, largely men in suits. I'm struck by how many people wear their mood on their face as they walk down the street - often anxiety, sometimes sadness or anger, and very occasionally happiness (a thin African woman, smiling, and her small child).

The train ride to Grenoble, at sunset, is beautiful but I'm too exhausted to notice. I finish the chocolate muffin, and discard the bad sci-fi novel in a trash bin next to my seat.

My hotel (Hotel des Alpes) is a stone's throw from the train station. The clerk is very helpful. My new power adapter doesn't work but he gives me one that does. After my long day, I need a beer. so I wander around a bit, get some Euros from an ATM, and patronize the bar at a nearby Chinese restaurant. (Note: France doesn't have good beer. There are no IPAs; the 'specialty' beers have very high alcohol content and/or perfume-y fruit flavors.)

I set out for INRIA using the directions Arnaud has put on the wiki. Unfortunately these are years out of date. I wait for the 6070 bus at a place where it no longer runs. After about 45 minutes I realize this. It's not clear what to do, so I start walking in the direction that the bus used to take. It's a hot day and I'm feeling weak. The sidewalk goes past some tennis courts and into an area of industrial parks. This approach isn't working. I retrace my steps and explore a bit more. I see a bus stop with a 6070 sign. Eventually a young man appears and I ask him how to get to INRIA. Fortunately he actually works at INRIA and speaks English.

So I finally reach INRIA, tired and traumatized. I locate Arnaud; the first order of business is to update the wiki with current directions, and email everyone.

Matt is there. He also has a story of trauma - he arrived the day before when Arnaud wasn't there, and got inside the security door, but then was unable to get out because he didn't have a card, and exiting employees viewed him with suspicion and didn't let him out.

Kevin and Keith show up, and we all return to Grenoble and meet Wenjing. Matt, Wenjing and I walk across the river to the Bastille, with the goal of climbing to the top (about 1,000' vertical). The main path has closed at 18:00. We walk around the side, and into a park where there's a Via Ferrata - a system of metal rungs, cables, and suspended bridges that goes up and across a 80' cliff, then across a gap to another cliff. You need a special harness with two slings and carabiners. There are about a dozen people on the route.

We explore a bit. A web of trails, some of them fairly steep, leads up the hill. We take the steepest of these. The trail leads to an old, immense stone wall that leads to the Bastille. Various staircases go around and through the wall, eventually leading to the top. We arrive around sunset, and the rosy light on distant mountain ranges is beautiful. As it gets darker, lights come on in the city below us. 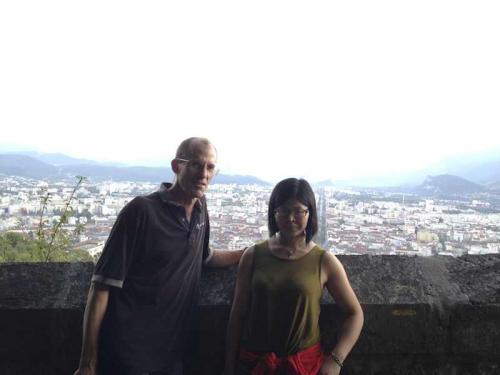 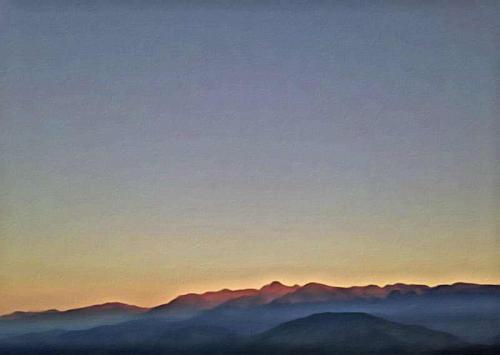 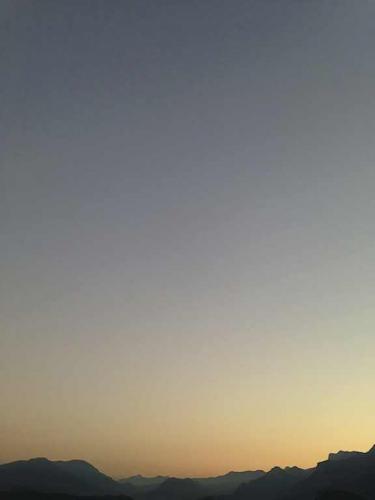 We take the Teleferique (gondola) down, then wander a bit looking for restaurants, eventually going to large outdoor place in a plaza. 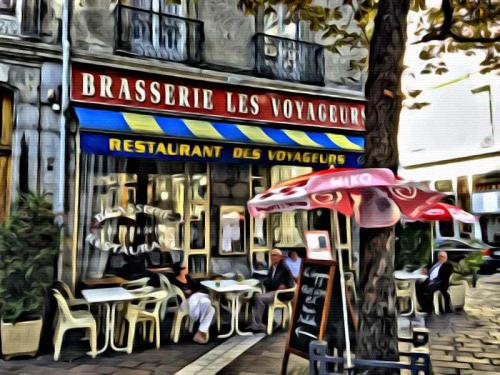 Matt took this and did fancy Photoshop stuff

The workshop attendees all manage to make it to INRIA on time (9:30). The venue is INRIA's posh main auditorium. The first day of the workshop is talks. An attendee from China brings a stack of pictures and certificates for me to sign - apparently I'm a minor celebrity in China. 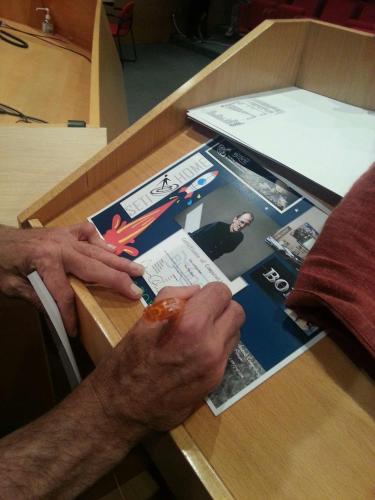 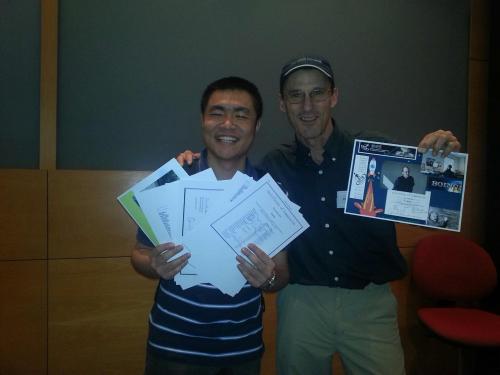 Afterward, a large group eats at La Palais at Place Victor Hugo. A group of students comes by; if you give them some money you can give one of them a shaving-cream pie in the face. 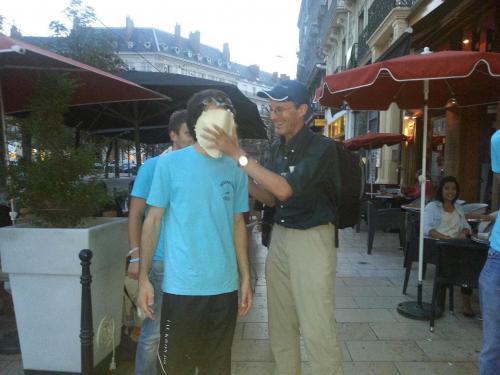 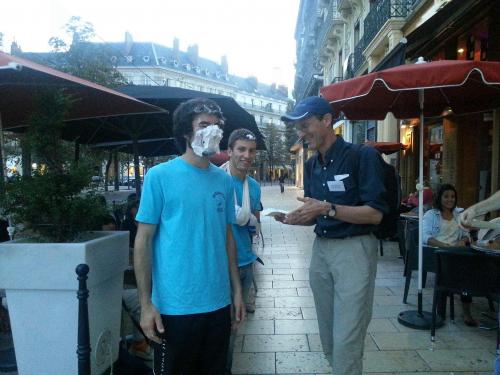 I meet Ludivine at her apartment, rented via Airbnb. The apartment, on the 4th floor of an old building, is nice and clearly occupied by an artistic woman. Ludivine is probably a photographer, but works for the city of Grenoble doing financial things.

The 2nd day is hackfest, followed by the workshop dinner at the restaurant at La Bastille. A group of young Germans is flying a radio-controlled helicopter. The dinner is good but extremely butterfat-intensive. I joke with Joszef about the unfortunate banquet in Taiwan. 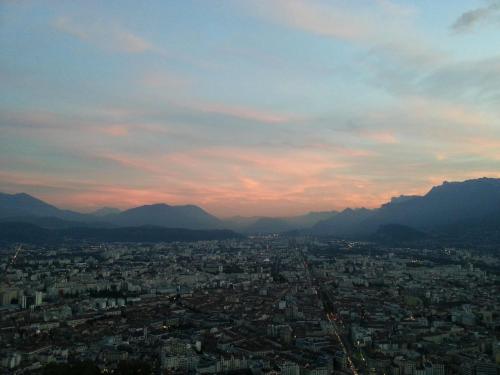 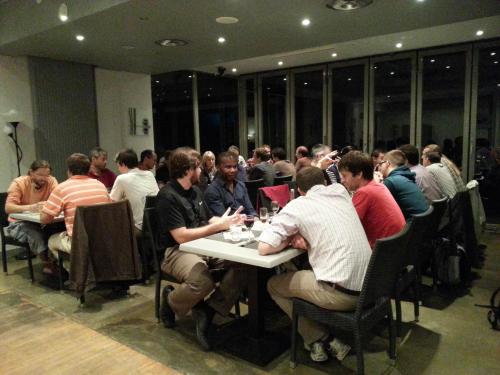 The 3rd day is more hackfest. That evening, I shop at the mini-supermarket across the street from the apartment, and make taglietelle with lardons and red bell peppers.

Nine of us meet at the train station for the hike. Arnaud picks us up in his van, which accommodates everyone with a bit of snugness. We drive about 30 min, and do a moderate hike that gains about 2,500'. We stop for lunch at the top of a cliff with spectacular views. Arnaud has brought an assortment of cured sausages, and there are fruits and cheeses. I've made yummy ham sandwiches. It's unquestionably the best hiking lunch I've had. We dawdle for at least an hour. I climb a bit of the nearby high-tension tower. 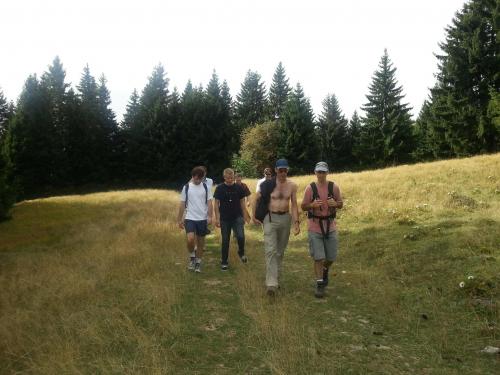 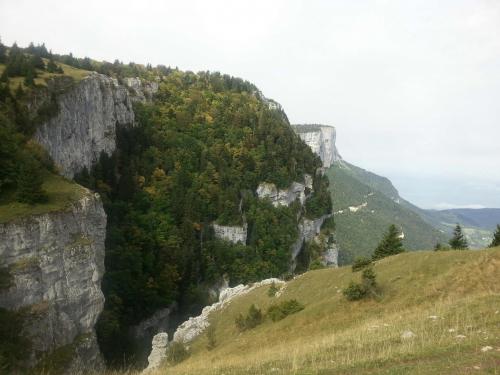 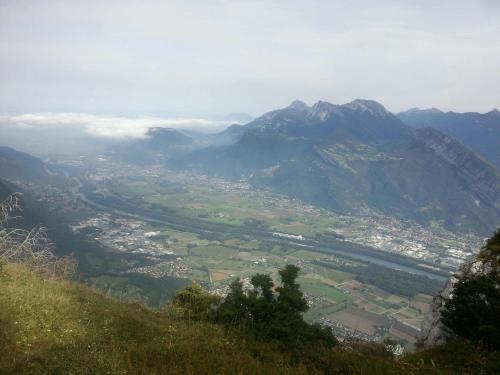 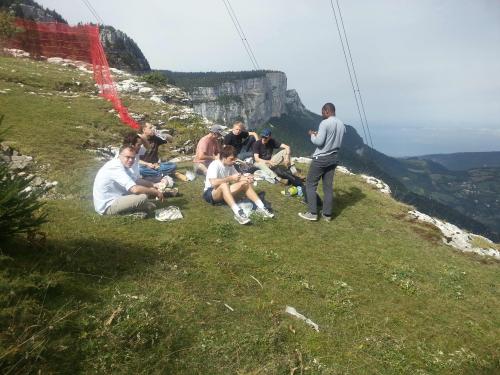 Afterward, a smaller group goes out to dinner. After a fair amount of random wandering. we end up in a great place on a small plaza near the Isere. Children play soccer. We go to a bar next door where all drinks are 2E, popular with students and dates. Chartreuse all around.

I discover that there's a climbing gym, Espace Vertical, about 1 mile from the apartment, and I walk there in a light rain. The gym is bright and new, and fairly large. There's bouldering and lead climbing - no top roping. I rent shoes, and boulder. The routes use color-coded holds, and are rated 1 to 9. I'm able to do a 5 and 6, but can't do some of the 3s. There are some extremely good boulderers - wiry 40-ish men.

I'm unable to get a belay partner, but it may be just as well. The routes are rated 5/6/7, ABC, but even 6A seems pretty damn hard, like 11C at Ironworks. The topography of the walls is disappointing - almost entirely flat and slightly overhanging.

I take the train to where Arnaud lives, in a small village about 30 min north of INRIA, and have dinner at his house. I meet his wife Sophie and kids (5 boys). We play a bit of piano.

The basic house is old (like 17th-century) but Arnaud has enlarged and modernized it considerably. The oldest son, Clement, has serious-looking hand and ankle injuries from rugby. I show him my broken finger and advise him to get X-rayed.

The 3 youngest kids eat first and retire to bed. A melee breaks out upstairs, with thumps and wailing; Arnaud and Sofie break it up and return with steely faces.

We eat a large pear/chocolate 'crumble' on our arrival - sort of a late tea. Dinner, soon thereafter, is quiche Lorraine and salad, followed by a cheese platter, then a cake with ladyfingers, pears, and chocolate pudding. Everything is delicious, and I eat generously, and am bloated and distended afterward. Some dieting and exercise will be called for on my return.

I go to INRIA and talk with Arnaud and his future student Hamaz.

For dinner, I cook ravioli with pesto sauce, more lardons (aka bacon), and zucchini. 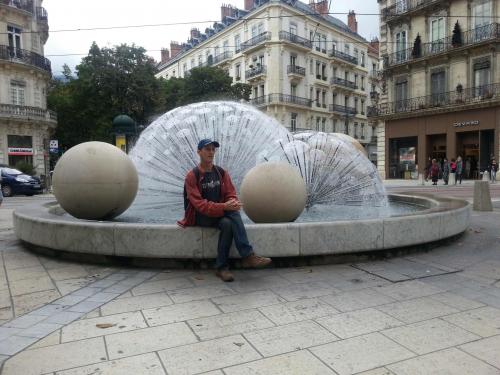 I make pork chops, mushrooms, and garlic bread, together with leftovers from last night. This menu is not well-received, and I end up doing the dishes as well.

I take the 7:55 train to Geneva, arriving at 10:24, then the 11:55 flight to Dulles, on which I'm typing as we speak. The train ride from Grenoble to Geneva is extremely scenic. The train goes up a long valley, with high walls on either side, sometimes forested bluffs, sometimes immense white cliffs. Isolated bands of cloud decorate the mountains. The train skirts a long lake resembling a fjord. There's little human presence - a small village here and there, and sometimes a castle high on the bluffs.
Copyright 2022 © David P. Anderson