Arrive Heathrow about 20:00. As usual, long lines for passport check etc. I look at a sign listing buses, and get on the only one labeled "Bath Road". But it turns out to go the wrong way on Bath Road, so I have to walk about 2.5 miles the other way. When I finally arrive at the Ibis Hotel, there's a line of 25 people waiting to register. At this point I just relax and chalk it up as "one of those days".

Easy EZ Jet trip to Geneva. I take the 10 bus to Cornavin Station (which for some reason is not called that) and find the Hotel at Home fairly easily. I run into John From Ireland and get a beer down by the lake. The hotel is on the border of Geneva's (very small) red light district. We meet up with Bernd and Reinhard, and have dinner at a (not bad) Chinese restaurant where Bruce joins us later.

Breakfast at the Hotel at Home is a joke. A bunch of us walk ~2 miles to the venue, which is a converted barn on a beautiful chateau bordering the Botanic Garden. The workshop goes swimmingly - a wide range of talks, every one of them interesting. Much synergy happens.

Dinner is at a nearby cooking school; dessert is the high point.

I walk with Bruce back to the hotel and give him the wooden puzzle. He likes it, and does about an hour of fiddling/analyzing.

John and I walk to the workshop via the Botanic Garden. There's a Alice-in-Wonderland psychedelic carousel, and what looks like a golf practice area that is in fact Art. Bruce has solved the puzzle.

The second day of the workshop is even better.

A group of us walk back; it's a hyper-clear day, and Mt. Blanc looks like it's 100 meters away. We eat at a bar/pizza place. Tolu, Matt and I walk to the area of last year's workshop and have a beer at a stylish bar that has an interesting disco light. We have some trouble finding the hotel and do some extra walking.

After some navigational confusion, I arrive just in time for the World Health Organization meeting, which is very interesting. We have lunch at the cafe of the International Red Cross Museum. The group splits up between a CERN tour and a U.N. tour, but I go home and take a nap. 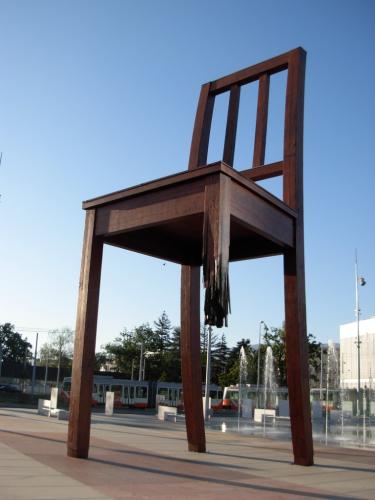 Tolu, Kevin and I have Thai food, then wander around and get ice cream.

Hike day: we take a train to Nyon (a charming town, where Bill B. has spent an hour already) then a 2-car train up a steep track to St. Gervine, high in the Juras. From there, a trail leads to the top of a ridge near a radar dome. The view of the Alps is even better than yesterday. We can see the entire range, 50-100 miles in every direction. The Matterhorn peeks out in the distance. 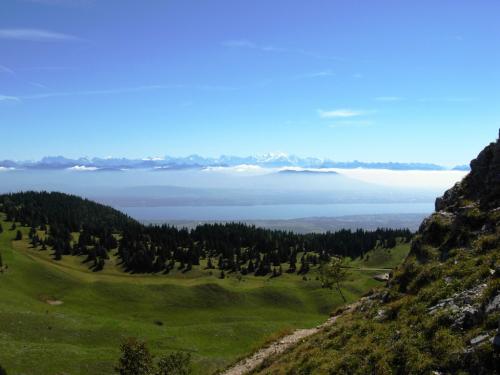 We get semi-lost on the way back down, traverse on a cow path for a while, then find a small path down a ski slope. The group is remarkably calm and good-humored. We get back to the train station and have a beer. 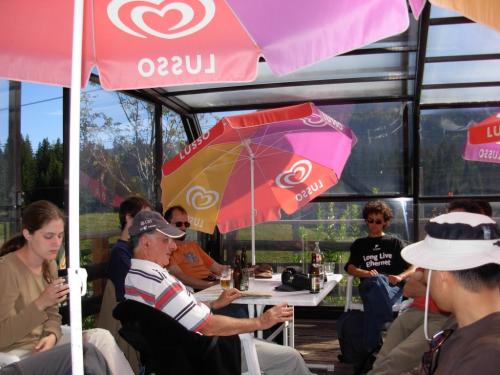 We catch the train and rejoin Bill and Kevin, who turned around early. One by one our group breaks up, and the farewells are heart-felt; this has been a true group-bonding experience. The final eight (Bill, Kevin, Tolu, Matt, Janus, Jack, Wynnee and me) eat at an Ethiopian place, which is not bad. 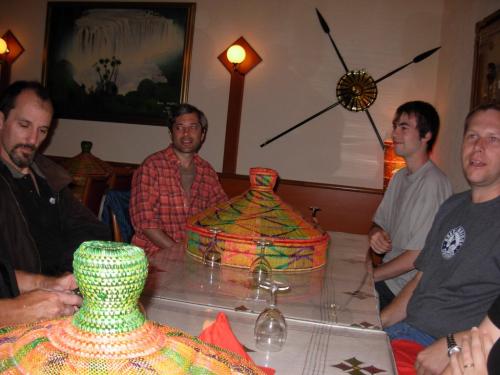 I fly to Barcelona and, following Gianni's directions via the Aerobus and the Yellow Line, locate the hotel. A tray of plastic-wrapped packets turns out to be tomorrow's Continental breakfast. I meet Bernd and then Gianni. We walk along the beach and have a beer. Bernd and I walk up the over-touristy La Rambla, then veer of and have dinner at a nice Italian place.

We talk with Gianni and Giovanni. I give a talk. Bernd and I get a taxi to the airport and fly to Hannover via Mallorca. Bruce and MAP meet us; I stay at Bruce's palatial new house.

Bruce, Bernd and I talk about teams. I work on a script to graph participation lifetime. We talk about a Heisenbug that's been plaguing E@h for a while. Bruce and I pick up Daniel and stop for ice cream.

More talk and a little work. We go to Daniel's soccer practice.

Bernd and I pursue the Heisenbug. After lunch I take a taxi to the train station and go to Leiden via Amsterdam CS.

Leiden is a wonderful town - all the charm of Amsterdam without the rampant modern development. I find the Hotel De Doelen (** but with charm), wander the streets for a while, and for dinner have a pizza and a lethal Belgian beer (8.5%)

I meet Mark and Hugo, we talk to campus, talk for a while, and I give a talk. There is a group dinner with another Mark (older professor), Toineka (tzvaneka), Hugo's friend who climbs and does forensic science.

I take the train to Bochum. There is disruption of schedule; I'm routed through Utrecht and almost miss my connection. Sigrid is waiting at the train station. She and family have a nice house in the middle of a block. She's inherited a Grotrian/Steinweg upright. Frani rides a unicycle with authority. Sebi has some insanely complex Lego constructs.

We go on a walk to the "Geological Garden" (actually an abandoned quarry). I find a sample of coal.

For dinner Sigrid cooks "Steinpichel", a veggie/beef sautee that is extremely tasty due to a huge dollop of butter.

I show baby pictures and see pictures of India - they went to a wedding of one of R's students there.

I sleep marginally. Sigrid and I go to a local bakery - you have to in the back door on Sundays. We have breakfast, do some music (Schubert and The Comedian Harmonists) and watch a science-education cartoon show with the kids.

We go through the Ruhr University and tour the Botanic Gardens (Germany's largest) which features a Chinese stone garden, donated by a Chinese sister university, laden with symbolism.

We go to the "Bermuda Triangle", a drinking-oriented part of Bochum, and have Currywurst and pommes at the place it was invented.

With considerable navigational difficulty (many roads are closed) we go to the Villa Hugel in Essen, that estate of the Krupps family going back to the 19th century. It's a Germanic, oak-panelled Versailles, with a large concert hall and a giant entrance hall with 20-foot-high portraits of various Krupps.

The place gives me the willies big-time. Krupps supplied the steel for the cannons and tanks of both World Wars. Hitler came here to strategize. Behind this fortune there are millions of crimes.

The last Krupps heir, in the 70s or thereabouts, withdrew the family fortune from the company and created a foundation that doesn't do anything malignant. But there's still plenty of blood on their hands as far as I'm concerned.

We continue to the Dusseldorf airport. My plane has been delayed, so we go to the observation deck and watch planes land and take off. It turns out there's an earlier flight, which I almost get on (note to self: always check for earlier flights first).

I haven't heard from Tolu and it's a gray day, so I just go to Heathrow and hang out for 6 hours in the Admiral's Lounge (since I'm in biz class - sweet). Comfy chairs and free drinks and snacks.
Copyright 2022 © David P. Anderson