My flight is co-branded United and Lufthansa. I stand in the United line for 1 hour. As usual, my anger toward the airline industry, and humanity in general, is dangerously high. A man behind me passes out. When I finally reach the front I'm told that I need to check in with Lufthansa (where fortunately there's no line).

The trip is uneventful. I run into Bill Bovermann at the airport, then take the 10 and 7 buses to the Rive station. From there, the directions (from the web) are vague, and it takes a while, but I eventually find the Hotel Bel Esperance. It's a typical 2-star place, reception on 2nd floor, tiny lift. The room is comfortable except the down comforter, which is too warm by a factor of 10 or so.

There's WiFi, and I do some work. Matt B. and Francois stop by. We walk around the old city and have dinner at a touristy place.

After a slightly disappointing breakfast at the hotel I navigate to the Uni-Mail building. It's freshman orientation day. A crowd of students is gathered in the atrium, and the various departments have set up tables with posters and demos. 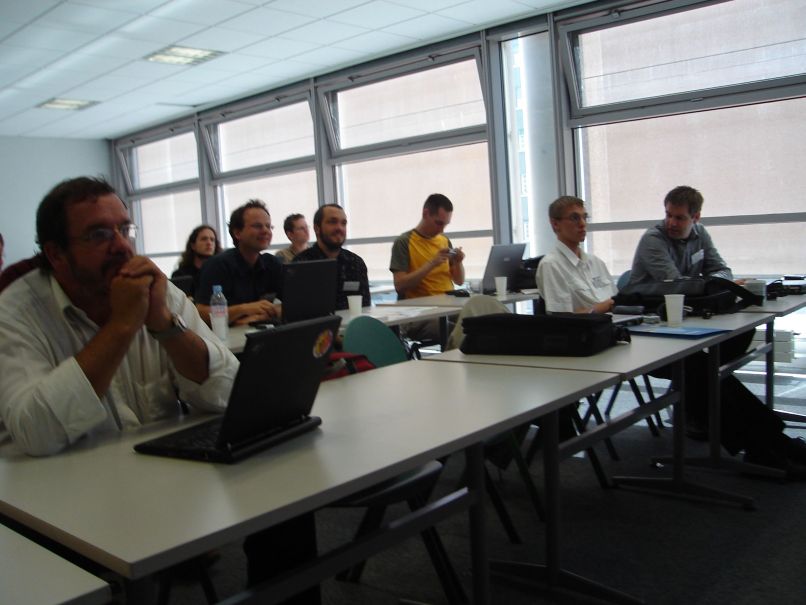 The workshop preparations have been extremely well done by Christian Pellegrini, and the workshop goes well. That evening we all go to dinner at Halles de l'Ile, on an island in the middle of the Rhone river. I talk with Willy de Zutter and others.

After dinner, Carl, Tolu and I take a meandering walk through the old city, which is deserted and feels absurdly safe; we imagine ourselves as muggers. 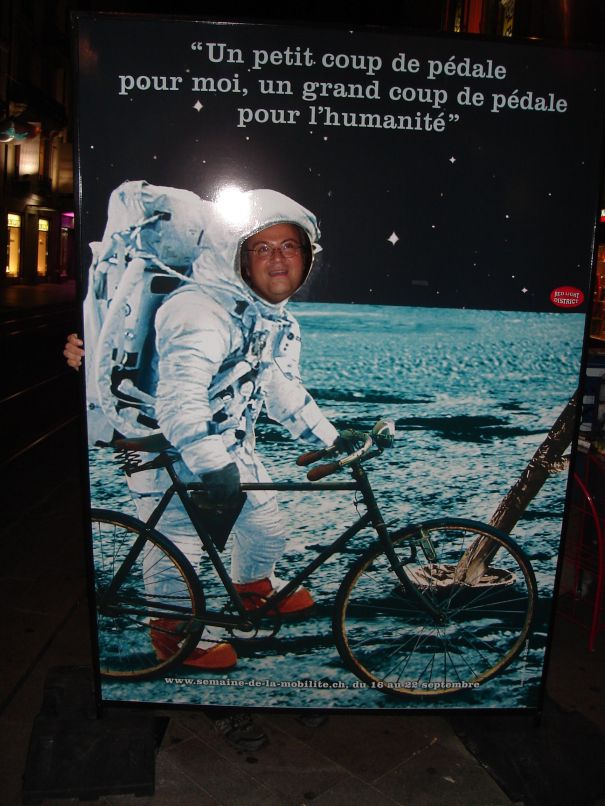 I forced Carl to do this 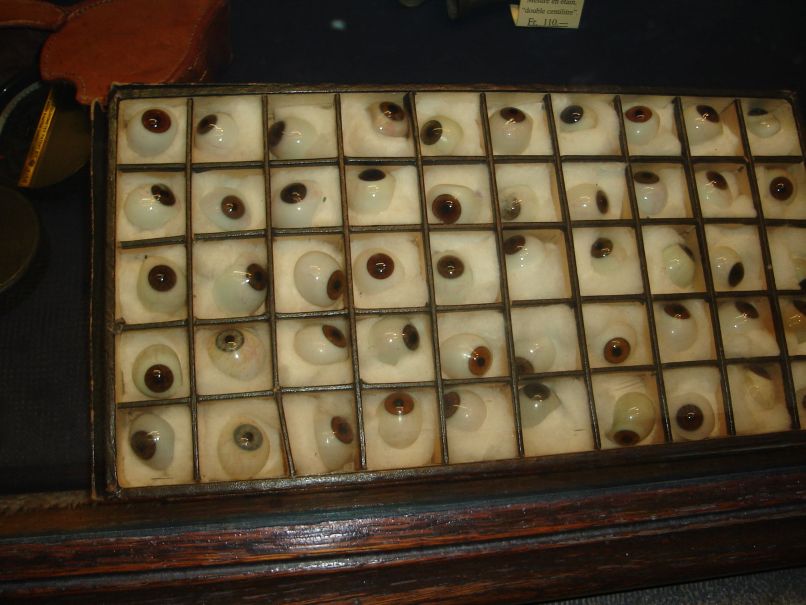 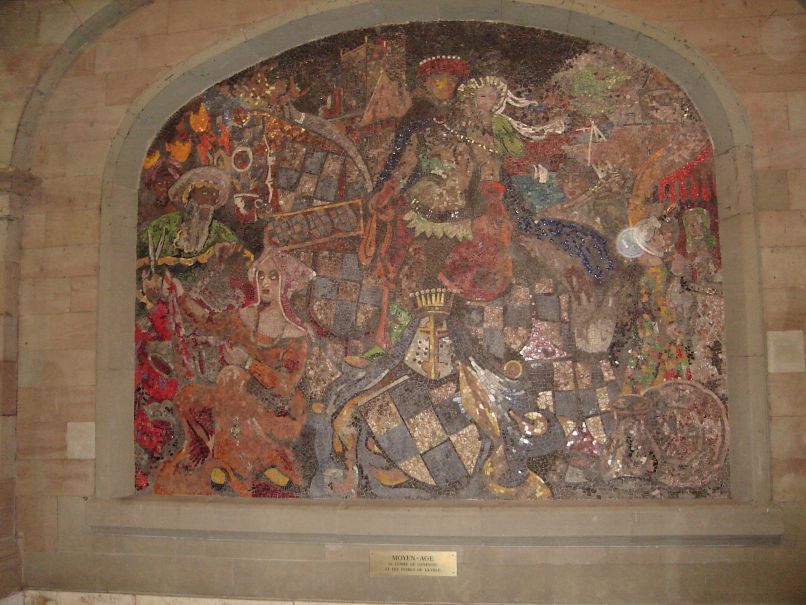 Mosaic at the State Archive. I'm not sure if it's old or new

Back in the room, the offerings on Eurosport are disappointing - motorcycle racing and boxing, a little lumberjack and world's-strongest-man competition.

I sleep poorly and struggle through the second day of the workshop. Carl and Tolu have Cannabis Tea at lunch. We wind up the workshop at 4, take a group photo, and then a group (which keeps separating and reforming) walks down to the fountain on Lake Geneva. I try to trick Thomas Mattei into sticking his finger into the fountain (which rises 459', and is probably very dangerous). We retire to a lakeside cafe and have beer and/or milkshakes. 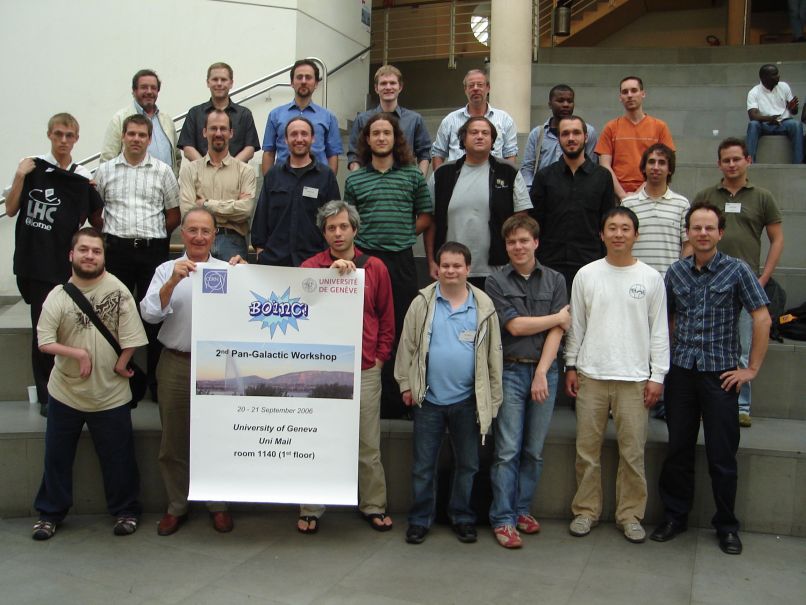 A smaller group wanders off in search of dinner, ending up at a place that looks fancy but isn't. I have a mediocre pizza. David Kim and I do some extra walking to top off the day.

David Kim and I go to CERN, taking the wrong bus and arriving late. We join others on a tour of the Atlas detector, which has progressed quite a bit since last year. 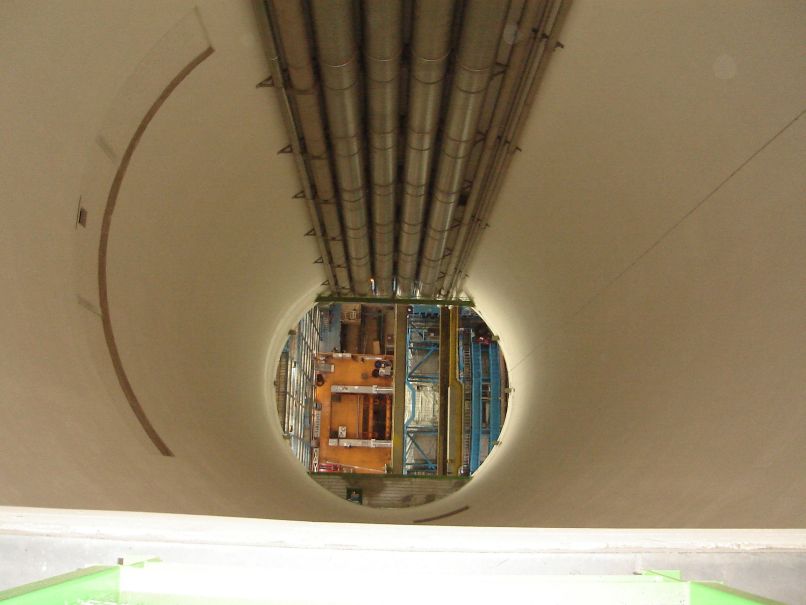 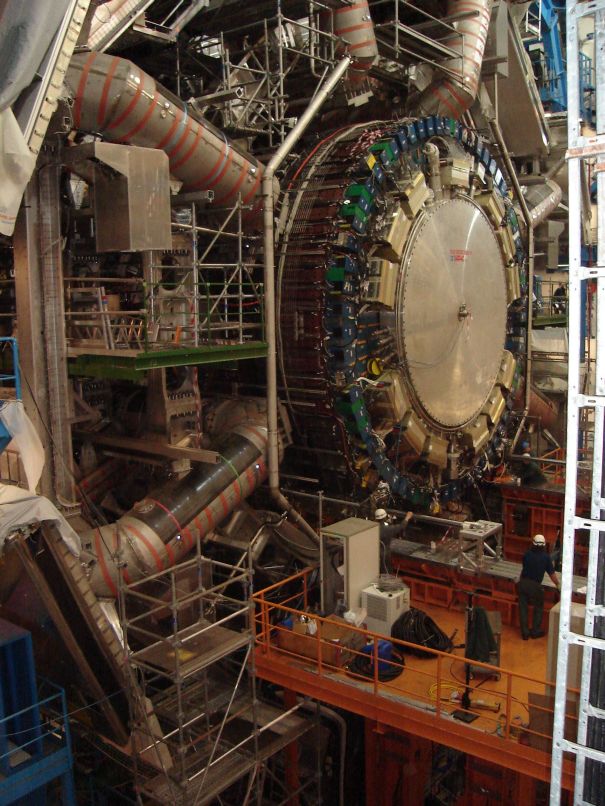 We return to Francois' office, hang out, and have lunch. I chat with Christian Pellegrini and Francois. David Kim and I return to Geneva with Christian, then go on a mammoth walk that includes a couple of hours sitting on a park bench by the lake. We have dinner next to a carousel at the foot of the old city, and swap mountain-climbing stories.

We've planned a trip to Mont Blanc. There's an early-morning weather scare, and a flurry of emails, but we decide to go anyway. Bill, Dave K, Francois and I leave from CERN and meet Ben and Christiane at the border. We drive up the valley to Mont Blanc; the scenery becomes progressively more spectacular and the villages more quaint. We stop to drink coffee and buy sandwiches in a small and unbearably quaint town whose name I forget. It's cloudy and a little muggy, but no rain. The snow-covered flanks of Mont Blanc poke over the surrounding hills.

We drive up to a trailhead and set of for Le Crut (?). A steep, narrow dirt road goes for a couple of miles through mixed forest. David Kim's a hiking stud, and he and I race ahead. We pass some other hikers, and one of them jokingly grabs my arm and tries to hitch a ride.

The road emerges on a small grassy plateau with a couple of farm buildings. A large group of people, speaking animated French, drinking wine, and occasionally bursting into song, is gathered at one of the buildings. It emerges that this is a reunion of the people who have lived in or worked in this place. The patriarch is an old man in a beret and blue overalls. Francois helps them take a group photo, and they give us some crude but effective white wine.

The upper reaches of Mont Blanc are now completely visible, just a could of miles away. There are several glaciers, bedraggled and dirty in the late summer. A large hump, ringed by cornices, hides the summit. There's a certain resemblance to Rainier.

We cross the plateau and head down a small steep trail into an incredibly beautiful, lush valley that leads up to the upper reaches of Mont Blanc. There's a tiny village of about 10 structures, one of which is a cafe. High on the mountain the valley fans out into three valleys, each containing a sizable glacier. Various streams run from these, merging into a lively stream, white with glacial flour, next to the village. There's also a potable spring, from underground sources. A dozen or so horses romp in a meadow above the village. 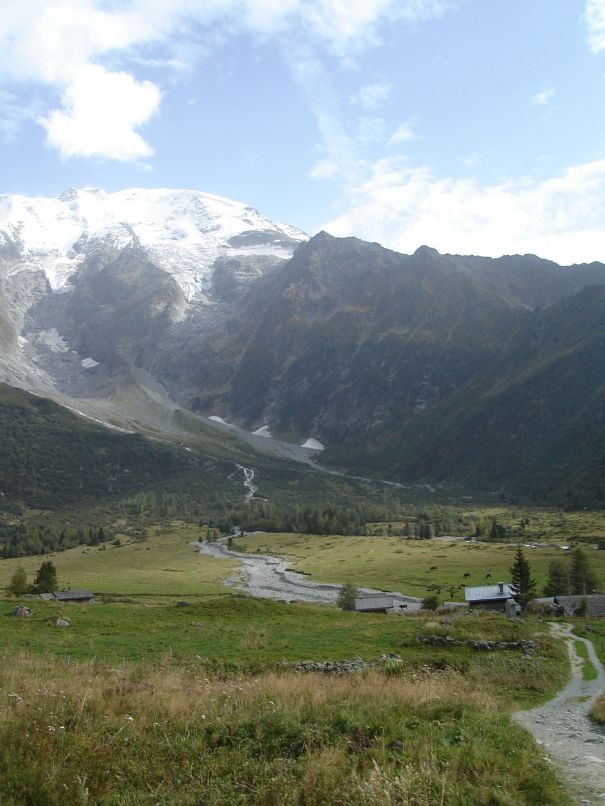 On the far side of the valley is a grassy gully leading up to a saddle point on a ridge. The group rests and has lunch at the base of this gully. We enjoy our sandwiches (and the view of Mont Blanc, and to some extent life itself). Ben, Christiane, and Bill decide to head back while Dave, Francois and I continue up to the saddle point.

We power up the gully, which is about 800' vertical. I become tired and soaked with sweat. Francois discusses Real (Royal) Tennis - a variant that is played in a moat, and in which he received his first lesson from the reigning world champion.

At the top is a large patch of grass of golf-course-like perfection, with a few large cairns. An antisocial backpacker sits at the other end, then proceeds on a faint trail the traverses the uphill slope. We have the option of descending the other side and returning by a longer path, but elect to return to the idyllic valley and return by a road that skirts the first ridge we climbed and merges with the first road. 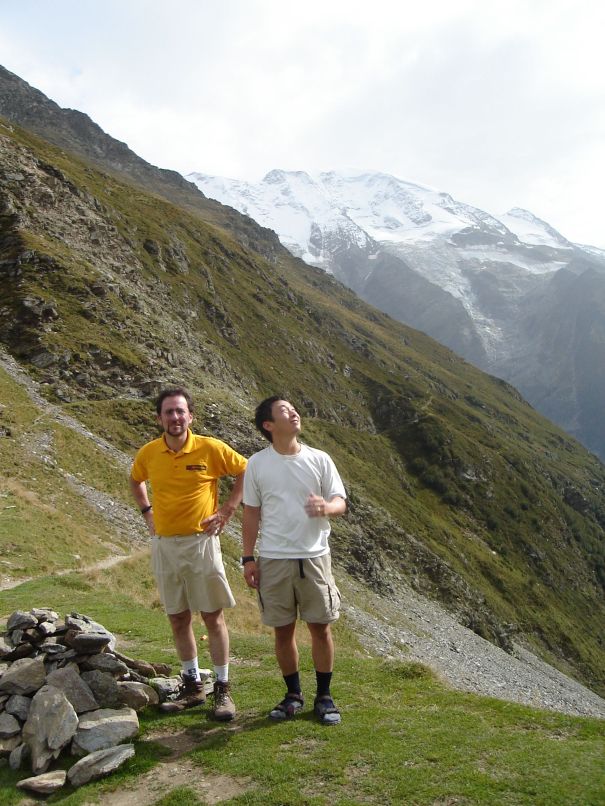 On the saddle. Note scary-looking trail in background 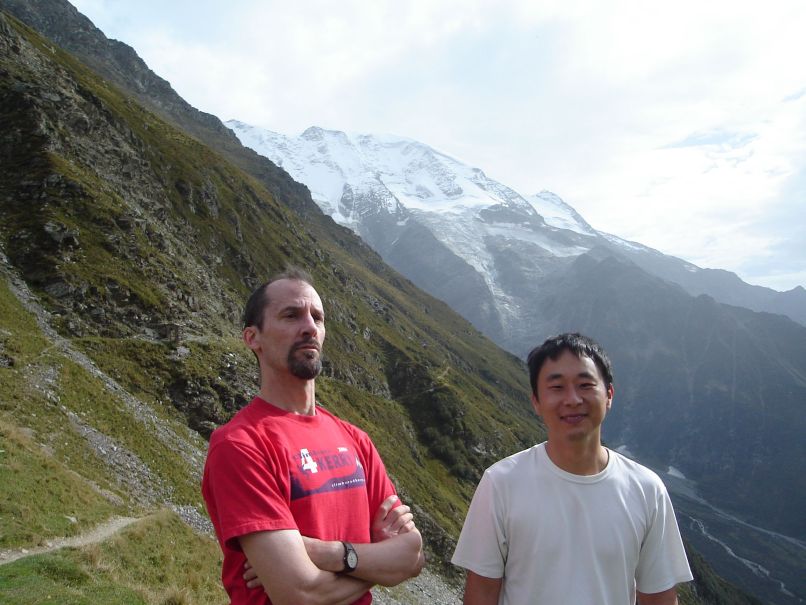 The clouds have shifted a bit, and the upper mountain is now mostly in sun. We descent to the village. Francois and I discuss Yes and Art Rock.

Francois talks briefly with an elderly man who describes the recession of the glaciers over the last 60 years. Back then, the glaciers were several hundred feet longer, and merged together at the bottom. Their recession is exponential: as more dark rock is exposed, the mountain absorbs more heat, and the rate of melting increases.

We reluctantly head down to the car. We stop at the same cafe for coffee (I have chocolate) and buy food for dinner back at Francois' house. On the drive back, we find ourselves on a small road that parallels the freeway, and have an astoundingly hard time locating an entrance to the freeway. Francois discusses electronic lab notebooks and bags of quarks.

Arriving at Francois' house, the faces of his extremely cute kids Gessie and Leo are pressed eagerly against the windows. I have a shower and feel restored. David Kim and I play with the kids while Sarah walks the giant dog and Francois prepares a nice dinner of bread, cheese, ham, sausage, and salad. Gessie asserts that she is a 'Ham Fiend' and complains that the piece of ham she is given is 'much too small for a Ham Fiend'.

On the drive back we hear about a schizo-nanny who believed that various people, eventually including Francois, were in fact zombies.

The unexpected highlight of the trip home is running into Vijay Pande in the Frankfurt airport. He's on the same flight as I am.