After giving a flaccid talk at the Grid conference, I wanted some exercise. So, on the advice of Ben S., I decided on Mt. Saleve, a broad flat-topped mountain east of Geneva. I've admired its huge bands of white rock many times. 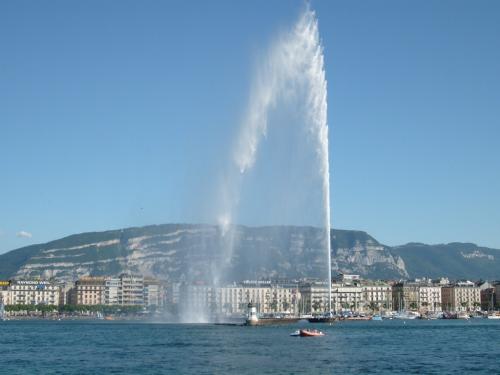 Mt. Saleve in the background 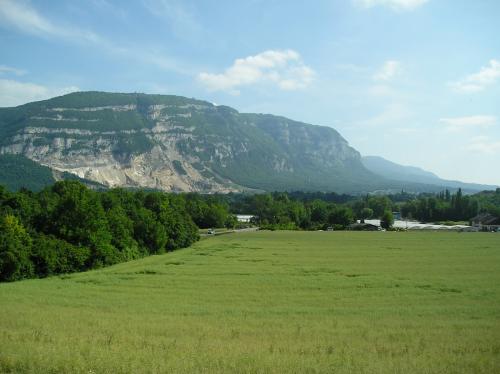 I had looked at a couple of web sites:
http://www.destination-montagne.ch/En/Articles/Paths_of_Saleve.html
http://www.rando-saleve.net/
but headed out with only a vague idea of where I was going. I took the 8 bus to Veyrier-Douane, walked across the border into France, went past a school, up hill, over a major highway, and through a country club. I was in Bossy at this point. Finally I saw small sign indicating the Grand Gorge trailhead. It said 2hr 50min to the top, and now it was about 1 PM.

The trail went through a deciduous forest and along a stream. It gradually changed to switchbacks, and steepened. I wasn't feeling great due to jet lag and stress, so I slowed down and used the 'rest step' (a technique for walking up steep hills without getting tired).

After a while I met a hiker coming down; a Brit visiting Geneva for work. We chatted for a bit. He had come up the Telleferrique (cable car) from Veyrier, and eagerly gave me his ticket for the descent. This bit of serendipity re-solidified my resolution to make it to the top.

The trail entered the upper part of the Grand Gorge, skirting along the base of the cliffs on the left. Up and up it went, winding around steep and ominous rock, then emerging rather abruptly onto a huge, grassy plateau at the top. It was 2:45 PM. I had climbed 800m (about 2,600') in 2 hours, and was tired. I finished my bottle of iced tea and lay in the sun for a few minutes.

I headed north (towards the Telleferrique) on a trail along the edge of the cliff. It led to a prominent point with a mind-boggling view: the Saleve face, the valley below stretching forever, Geneva and its fountain, the still-snowy Juras, Lake Geneva. I felt a powerful surge of excitement, joy, and presence, experiencing the world in a raw and unfiltered way, waking up suddenly from the murky and restless sleep of everyday life.

This feeling faded quickly, unfortunately. I walked past the Observatory (a giant radar tower of some sort) as a bus disgorged its load of gawking tourists. (I need a T-shirt: I AM NOT A TOURIST). Two hang gliders were circling, and I walked past the green-carpeted area where they take off and presumably land. Soon I arrived at the Telleferrique and descended. The view from the Telleferrique is marred by the huge Earth-raping quarry it passes directly over.

I was back in my hotel by 4:30 - a tremendous hike, lots of bang for the buck. It reminded me in many ways of the Ledge Trail in Yosemite, although it's quite a bit easier.