July 22 - Summer is half gone and I haven't climbed anything yet. I need to get in shape for Shasta, and the past week was immensely stressful. So I pile all my camping gear (including brand-new crampons and ice axe) into the Honda, and set out for Tioga Pass. My climbing buddies are busy, so this is a solo flight. Leaving Berkeley at 11 AM Saturday, I stop in Escalon for supplies (a cheese sandwich for the trail), pick up a coveted American Eagle pass at the park entrance, and pull in around 4 PM.

My first mission: scout out the approach to the Dana Couloir, a snow-filled gully up the steep east face of Mt. Dana, which Mike O'Brien and I have discussed climbing. I park at Tioga Lake. Tioga Lake
On the far side of the lake is a pass separating Mt. Dana from Dana Plateau. I walk around the lake. A sign by the trail has an arrow for 'Dana Lakes'. Unfortunately the trail ends abruptly at this point. I scramble up the slope (scrub pine forest or lupine field, your choice) to the pass, eventually reaching a trail traversing along the meadow/rock boundary. 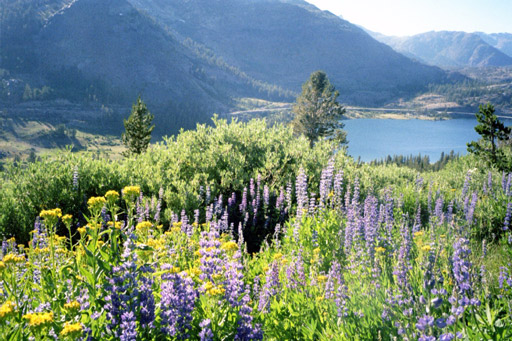 A lupine field above Tioga Lake.
Beyond the pass is a little plateau, lush grasses and wildflowers and a glacier-fed stream, stunningly beautiful especially in the 'magic hour' light of 6 PM. 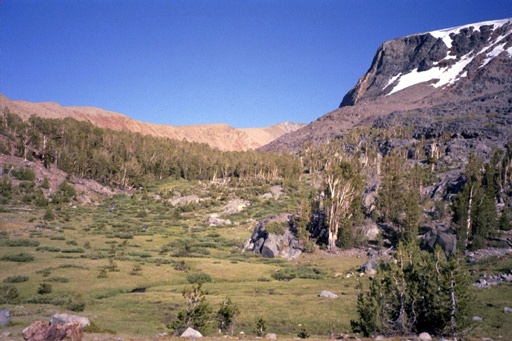 The plateau. Mt Dana at right. Couloirs are beyond.

It's apparent that the couloirs are at least a mile past this plateau, and it's late, so I do a little boulder scramble up to a snow patch, taste the snow, and head back. 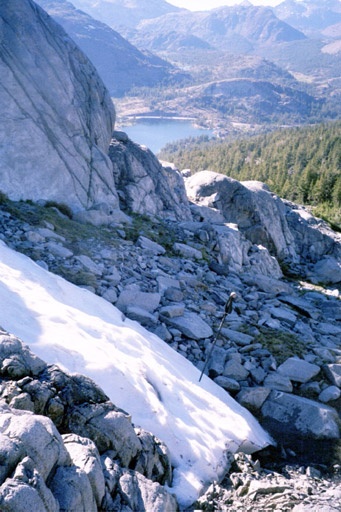 Turnaround point. Lake Tioga below.
By the lake, I run into two guys returning from an attempt on the Couloir. They tried it without ropes. It was much steeper than they thought - estimated 50 degrees. One of them had slipped, lost his grip on ice axe, and barely managed to stop with crampons, sliding on his back. Unnerved, they gave up, having made it about 1/3 of the way. They thought the other (southern) couloir might be less steep, and said it was about a 3-hour hike to the base of the couloirs.

I get back in the car and drive to the Sawmill walk-in campground. There are no vacant sites. Walking back to my car, I run into a wiry, grizzled man in an Army jacket who introduces himself as 'Torch' and offers to share his tent site at Saddlebag Lake. This seems a bit dicey, but the other campgrounds are full so I drive up to Saddlebag and pitch my tent next to his mobile home. We chat a bit. He's the campground manager, a park employee. His nickname, 'Tioga Torch', stems from an incident 3 years ago when a can of lighter fluid blew up in his hand, burning his stomach, sides, and arms. He works for the park service in the summer, then returns to Colorado Springs, his motor home packed with abandoned or donated camping gear, which he sells at flea markets. Ten years ago, his wife left him for his fishing buddy - 'I sure do miss him'. I give him $5, which pleases him a lot.

I crawl into my tent, switch on my laptop, and do a bit of high-altitude programming. Then I try to sleep. There are several problems. My nose is plugged up. My heart is beating unusually fast (altitude). I've used the Mike O'Brien bag/pad/bag approach, and it's way too hot - I feel like a baked salmon in foil. The outer bag by itself is fine, but still I am wide awake. At 4 AM it seems to be getting light, but it's just the moon. At 5 AM the sky begins to lighten, and I get up, eat 3 packets of instant oatmeal, break camp, and hit the road. 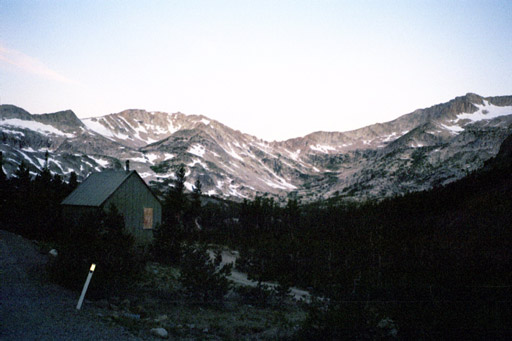 Mt. Conness ridge viewed from Saddlebag Lake at 5:30 AM.

The sun is just touching the tops of Mt. Dana and Mt. Gibbs as I drive through Tioga Pass. 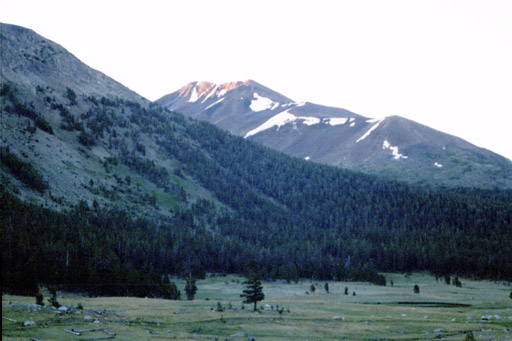 Sun on Mt. Gibbs. Note ridge and false summits.
I reach the Mono Pass trailhead and set out around 6:15 AM. It's dark and cold. The trail goes along a valley between Mt. Gibbs and Mammoth Peak. The latter is a beautiful white granite mountain which, bathed in the morning sun, looked incredibly attractive. I considered changing plans, but think better of it.

Mt. Gibbs starts out as a ridge to the left of trail, eventually rising about 2,500' above the trail. I walk on the trail for about 30 minutes, then strike out up the ridge, through a sparse pine forest. The altitude hits me hard - I move slowly but am still gasping for air. The mosquitos are a great motivator - whenever I stop, they swarm me within a few seconds. (Note to self: bring bug repellant.)

I move laboriously up through a variety of exotic ecosystems, including something like a grass-covered ballroom staircase. Eventually the grass and lupine give way to rock - loose red/orange rock (Gibbs and Dana are Sierra anomalies: non-granite). The rock is a pain - most foot-plants tilt or slide downhill. I quickly learn to seek out the areas where plants grow - the dirt and plants cement the rocks.

The wind starts to blow pretty hard. I switch from fleece to down parka. The harsh sun peeks over the edge of the slope, right into my eyes. 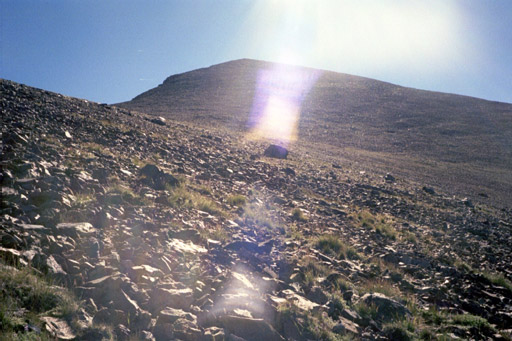 I don't feel good, largely because of lack of sleep. I stop in a grassy area, eat half a Clif bar, shut my eyes for about 10 minutes, and am somewhat rejuvenated.

There's a peak above me, but I guess correctly that it's a false summit and aim for the shoulder to the right of it.

I pass an odd wooden object positioned in a man-made level area. Functional or ceremonial? 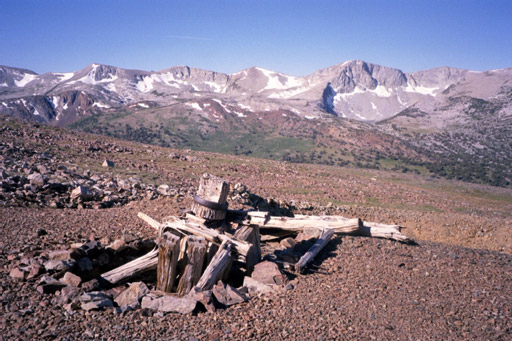 The odd wooden structure.
Coming around the shoulder at about 9 AM, I see the summit. It's far away, looming like the Empire State Building (seriously... it was probably about 1000' above me). This is discouraging and I think about turning back and getting an early start on the long drive home. However, I had set an 11 AM turnaround time for myself, so I decide to just keep plodding away and see how far I get.

At about 9:30 I look up, and there's the familiar triangular peak of Mt. Dana poking over the ridge! I let out a whoop, and feel a tingle of excitement over my whole body. Armed with a new burst of energy, suddenly I know I'll make it to the summit.

Sure enough, at 10:15 I'm on the summit. It's a crystal-clear day, upper 50s and a steady 25 MPH wind. Just to the east is Dana and the col that Mike and I explored last summer, and beyond that Mono Lake. To the southeast is highway 395 going down to Mammoth Mountain (not to be confused with Mammoth Peak). An especially pronounced airplane contrail casts an enormous shadow across the plain. 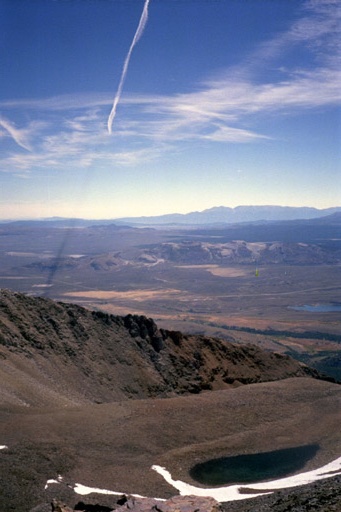 There's a cairn at the summit, and tucked among the rocks is a heavy aluminum can containing the register. 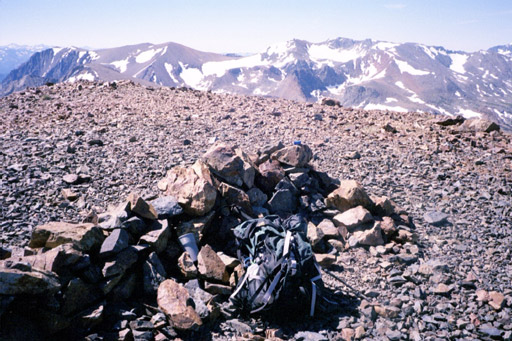 The summit. Note register can.
There had been a visitor the day before, but none for several days before that; this heightens my injury paranoia. Most of the entries included notes to the effect that being atop Gibbs is the greatest thing in the world; that sums up my feelings.

I find shelter from the wind and hunker down for lunch. Taking a bite from the cheese sandwich, I almost gag; it's dry as sawdust and foul-tasting. I settle for some trail mix and the rest of the Clif bar.

The wind picks up and I head down at 10:30. Instead of returning the way I came (angling down the ridge) I decide to descend directly down an enormous cirque (amphitheater) immediately below the summit. There's a green, inviting plateau at the base of the cirque, and it looks like an easy descent from there to the main valley and the path.

However, the descent is quite difficult. The steep, rocky slopes of the cirque are exhausting and harrowing. I try to find gravely regions where I can dig in my heels and slide with each step. Otherwise I laboriously side-step down the larger rocks.

Exhausted, I reach the bottom of the cirque around 11 AM and cross a small snowfield onto the grass. Looking up, the cirque is unbelievably imposing. It's hard to judge precisely, but it looks about 2000' across and with a rise of close to 1000 feet. It would be very difficult to ascend that way; the rocks slide too much. 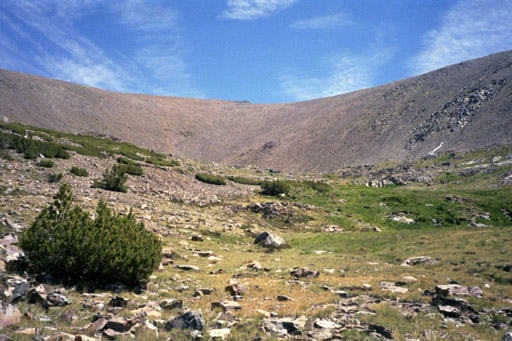 The cirque viewed from below.

It's totally calm down here. I lie down and rest for about 5 minutes.

The rest of the descent (another 1000-1500') is not easy: a stairway of meadows separated by steep rocky stretches. I'm starting to get mentally tired and have a couple of near-falls and ankle-twists. Eventually I reach the valley floor and walk through a forest. I spot a couple of hikers through the trees, and am immensely relieved: I've made it back to the path. I catch up with the hikers: one of them is a man with crutches and withered legs. We talk for a while. He aspires to climb Dana (!!) and I don't doubt that he will.

On the slopes, my body has been pumping out huge amounts of energy. On the flat, this energy level shoots me along like a rocket. However, the 3 or so miles back to the car seem to take forever; I can't believe how much horizontal distance I covered up on the ridge. 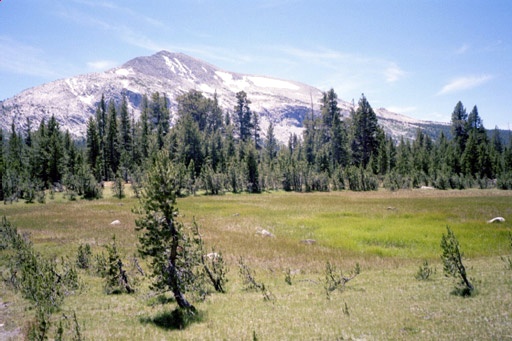 Mammoth Peak viewed from the Mono Pass trail.
I sit down to remove a pebble from my boot, and when I try to get up my hips and calf muscles cramp in unison. Continuing, I start noticing landmarks from that morning (a twisted dead tree alongside the trail, a brook crossing) and soon I am at the car. I continue Mike O'Brien's tradition by dangling my feet in a cold stream.

The first leg of the drive (to the Tuolomne gas station) is rough: I am very, very sleepy. I park, shut my eyes for 10 minutes, and drink some coffee; after that I'm OK. A Giants game on the radio (somehow the transmission reaches well into Yosemite) keeps me entertained, though it's no substitute for Botticelli, the 5-letter-word game, and human company. I continue another tradition, stopping at 'Missy's Espresso House' in Escalon for a Napoleon, which I eat in the 103-degree heat at an outside table, watching the stream of SUVs go by: other Yuppies returning from the mountains.

This was one of my favorite climbs of all time, and it boosted my confidence for Shasta. Gibbs isn't that attractive or challenging, but it's big and the terrain surrounding it is beautiful.

Navigation summary: I'm happy with my route, especially the ascent. A more gradual descent might have been good - the cirque is hellish. It would have been fun to go along the ridge, then veer east into the Dana/Gibbs valley.

One cool thing about Yosemite is that the vegetation is almost never an impediment. There are no giant bramble-thickets or snag-clogged forests. The main impediments are rock-based: cliffs and talus fields.

I didn't get a chance to use my snow equipment. There weren't many big patches of snow.

I'm stunned (as always) by the absence of people. Thousands of people pour into Tuolomne meadows every day. They set up their aluminum chairs and Coleman stoves, build their fires, maybe walk down to the stream. Up on the ridges and peaks, the sacred places, there is nobody. Which is fine with me.

Response from Mike O'Brien: Your trailer implying acclimatizing from berkeley to Gibbs is comparable to 19,000' to 29,000' is way off. The pressure (and thus the oxygen supply) is an exponential function of altitude so the difference from 0 to 12,000 is much smaller than the difference from 19,000 to 29,000.