Cryptic notes on my first trip to Greece, with my Greek/American friend L. We visited Athens, an island in the Aegean Sea (nameless at the request of L.) and the Peloponnese peninsula.

All photos were taken with a disposable 35mm camera. 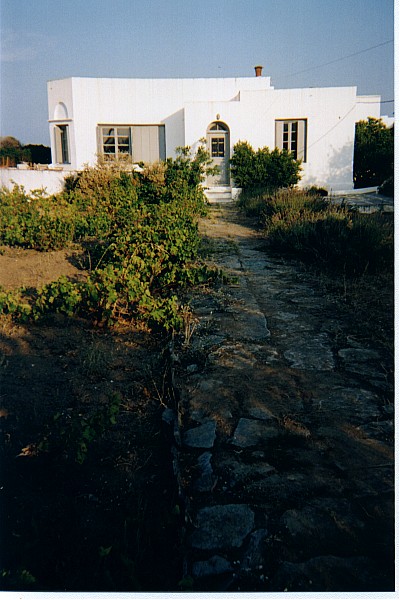 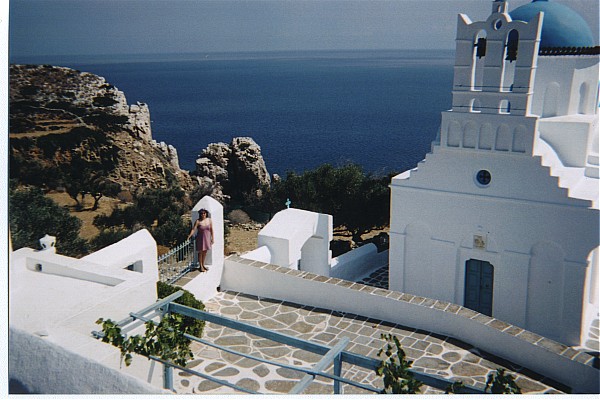 You can't take a bad picture of this church.
Split peninsula: miracle of virgins rescued from randy pirates. Two nice restaurants on beach. 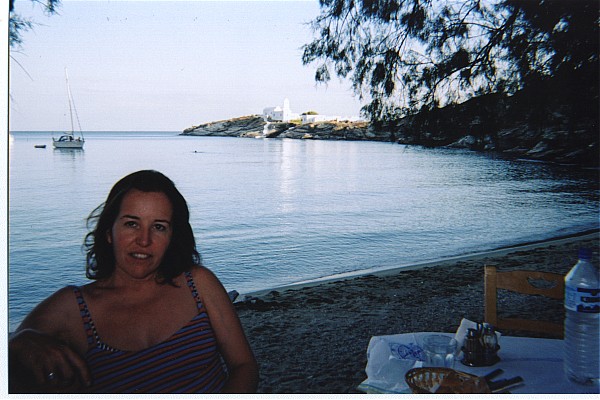 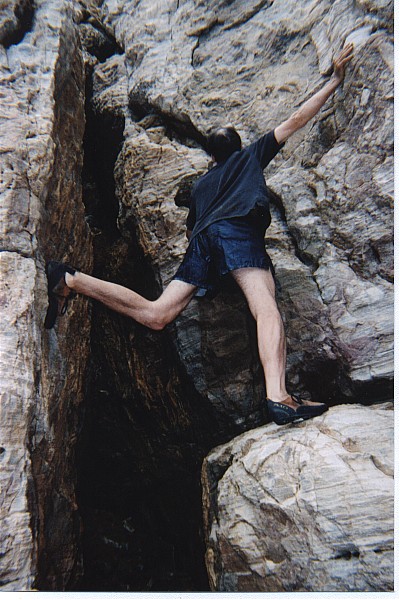 Rock climbing accident: I fall on bouldering move, lands on steep slope, tumbles another 6' or so. Bruised heel, back contusion, shin lacerations.

L. deals with local tradespeople, trying to get floor repaired. We catch late-night high-speed ferry back to Athens, which has been afflicted by tropical late-afternoon thunderstorms in our absence.

Next day we visit the Parthenon, the nearby Erectheion (source of much ribald humor) and the Tower of the Winds (likewise). 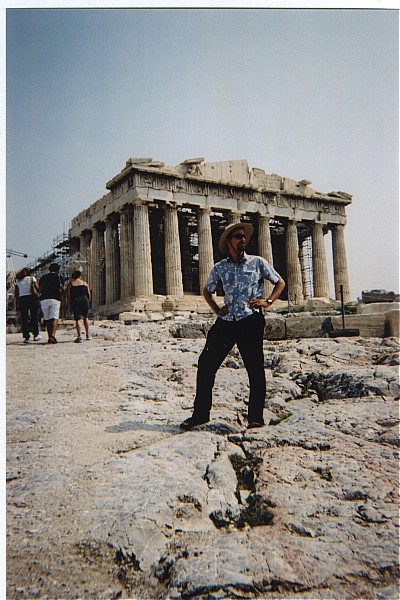 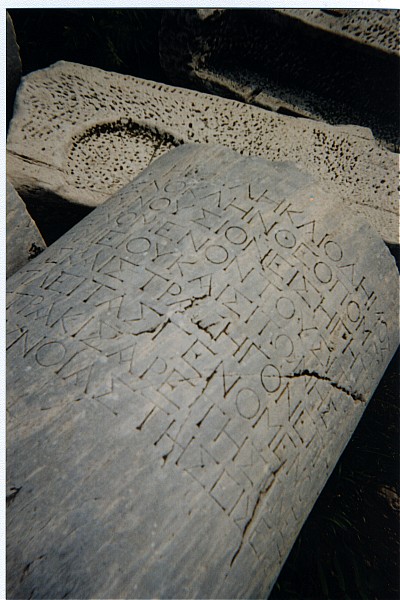 Some ancient Greek. Note lack of spaces between words.
We descend through the Plaka (ancient car- and chariot-free neighborhood) and a modern Agora with dealers of many sorts of junk. Dinner w/ L.'s sister, laconic husband, and the mirthful Dimitri, who tells a series of jokes, the best of which draws a link between John Wayne and British toilet paper.

Rent car (SEAT Ibiza - very good). Leave Athens ~11 AM. Aggressive driving is needed, so I seize control of the wheel. Visit ruins at Acrocorinth (Ancient Corinth - many towns in this area have Acro- and Neo- variants). 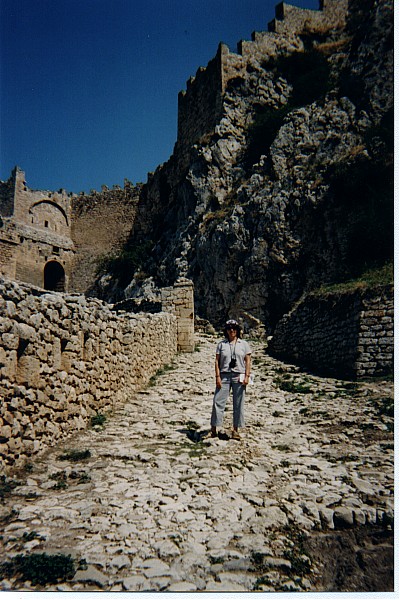 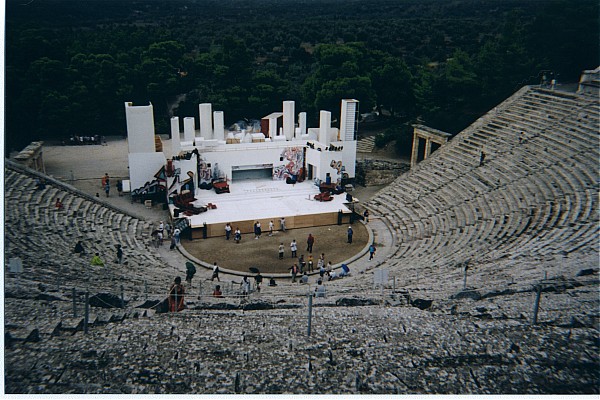 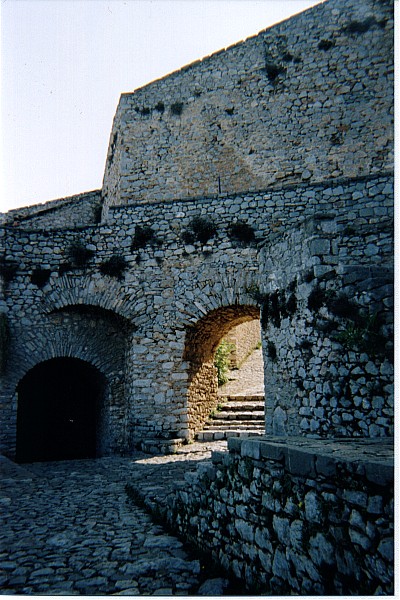 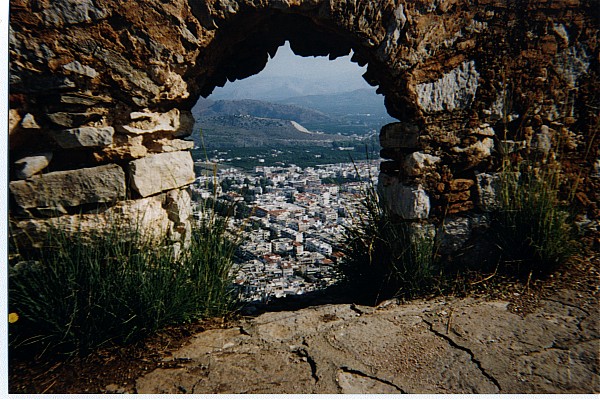 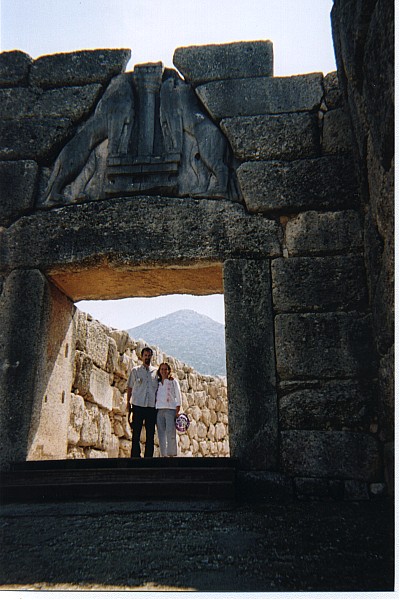 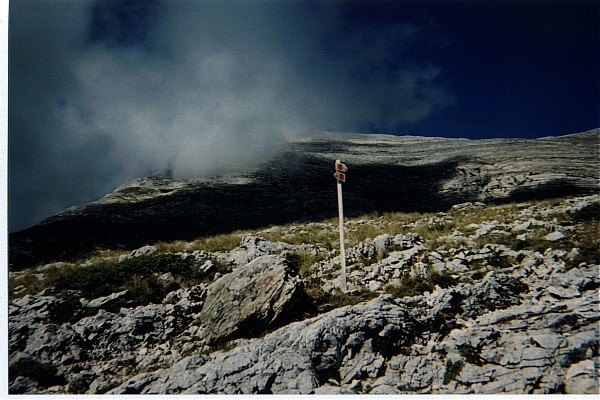 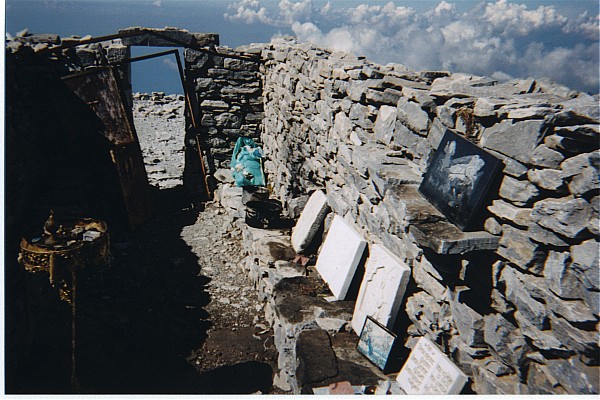 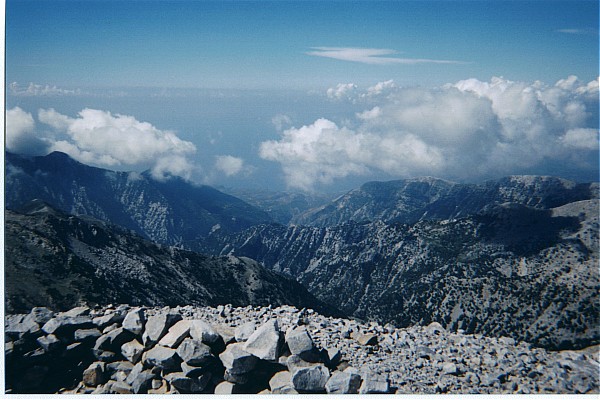 Gorges leading down to sea near Kardamili. 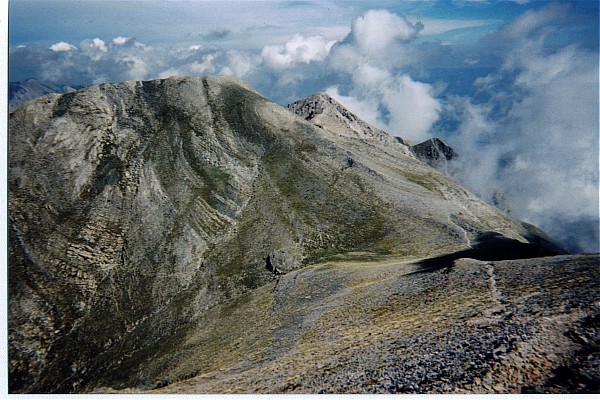 Impossible to see, but flocks of sheep and goats are on far slope. 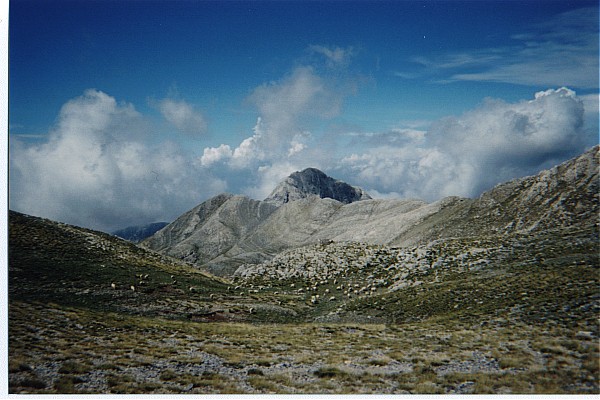 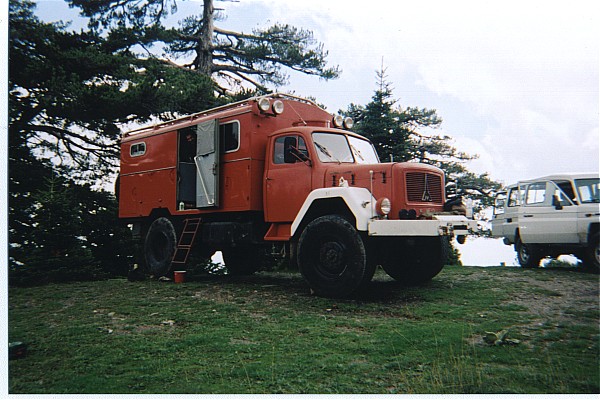 Woken up by extremely loud bells from tower 6 feet away. Poorly-intoned chanting from church service amplified on public speakers. Warm bread and Nutella for breakfast on balcony. Drive up into hills, attempt to locate trailhead of scenic gorge hike. Navigational problems, terrible 3-point turn. Rain starts to fall, give up on hike. Drive to Kalamata (charmless). Drive to Sparta via winding, extremely scenic road. Stop at sport climbing area (bring gear next time). Stop at Mystras. Frescoes in churches fail to live up to Gaugin/Monet hype. 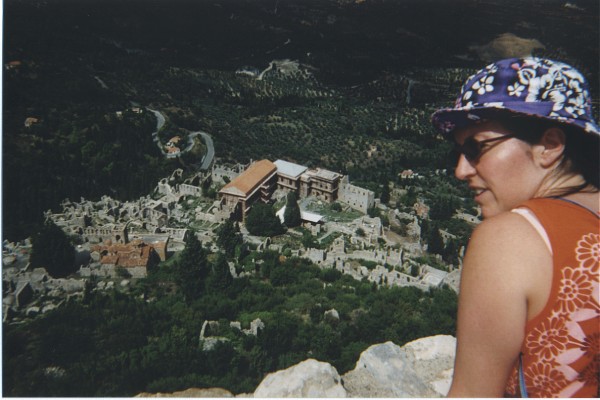 View from upper castle at Mystras
Rainstorm. Pleasant drive back. Stop at Corinth canal, which links the Aegean and Ionian seas and separates the Peloponnese - 6KM long and very deep. I toss in various coins. 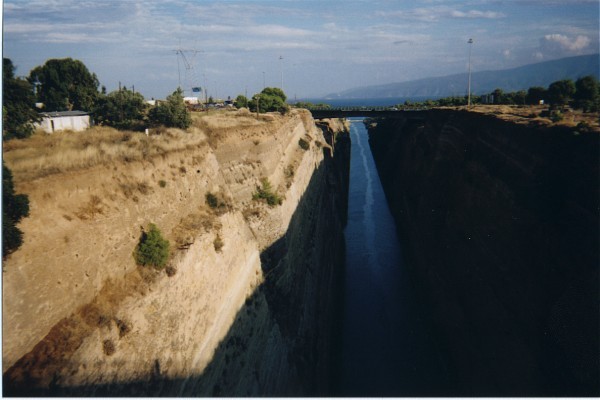 With some effort, we locate a climbing gym on the fringe of town. It's the headquarters of EOS. Things are getting started when we arrive at 6:30, and a woman (Marina) tells us to warm up. The walls have partly wooden holds (positive, sloped). Routes are not well-marked, but good enough. We get harnesses and do all the top-rope routes. The man (Yannis) points out some 5.10-ish routes, and also a peculiar wood strip that snakes up the wall, for layback practice. The regulars do all lead climbing. We have a great time. L. subscribes to their bimonthly magazine.

Dinner at a nearby Cretan Taberna leaves us both feeling bilious.

Athens has grown explosively and haphazardly. It has a 2nd-world feel. Unlike most European cities, it has few relaxing places to walk. Small streets have no sidewalks, big streets are noisy and smelly, with motorcycles and scooters weaving among the cars. There are frantic efforts to upgrade the infrastructure in preparation for the 2004 Olympics.

English is the Lingua Touristica, and many of the translations have an ad-hoc quality:

'Fishing Suppliments' (on a bait/tackle store)

'Out of space' (in liquor ad; I think they meant 'outer space')

There are regional variations, but all restaurants have basically the same menu. In fact, most of them don't bother to print the menu. If you want, you can go into the kitchen and look at the prepared dishes.

The variation between restaurants has more to do with freshness and quality of ingredients than with the dishes served.

Greek coffee: boiled, served w/ sludge. One sign said 'Made in the sand', which I at first took as a malapropism but which turns out to be an archaic and high-end way of preparing.

Yogurt is available in a range of butterfat levels, from 0% up to 10%.

The culture is largely closed and conservative. MacDonalds and Starbucks have not made inroads here. ID cards specify religion. Even modern/liberal people practice religious customs. Baptism required for admission to public schools.

Corruption exists at all levels. Major transactions (e.g. real estate) are in cash to avoid paying taxes. There are no personal checks. To get things done you need to know people; your connections are called your 'means'.

Hatred of Turks is programmed at an early age. Mutterings of 'taking back what is ours' (the western coast of Turkey). Bizarrely, the seat of the Greek Orthodox church remains, isolated, in Constantinople (Istanbul).

Normal conversation is loud and highly animated, and might be mistaken for fighting.

There are different and specific salutations for thousands of situations.

Nonverbal cues are different. The gesture for 'no' is raised eyebrows and a 'tsk' sound. The worst obscene gesture is an upraised open palm.

There is a class of puns involving Greek phrases that sound the same as some English phrase ('Nice party' == 'There's Sparta' in Greek).

There is a class of Jesus jokes told around Easter. E.g.: Jesus is on the cross, bleeding and near death. He moans piteously. Disciple: 'What is it, my Lord?' Jesus: 'Hey - I can see your house from up here!'.