Dave Weinberg is out here for a week, so I take him and Rich Kraft on a short trip to the Sierras.

As we approach the 120/108 split a big sign says: 'Hwy 120 closed at Tioga Pass'. Huh? I ask at the gas station: it's closed because of a rock slide. No alternative but to go over Sonora Pass on 108. As a result we pull into our favorite camp site at Mono Lake a bit late, around 7:30. I hastily cook dinner, improvising a grill out of a buckshot-riddled can for Rich's sausages. The stars are exceptional, and we enjoy a sequence of meteors.

Neither Berg nor Rich sleeps more than a few minutes. We learn that CalTrans is letting people drive past the rockslide at particular times: 6:30 AM, noon, 6:30 PM. We decide to try a hike off the June Lake loop. We park at Silver Lake and take the trail to Gem Lake. The trail has a lot of horse manure on it and is dusty and hot. Agnew Lake and Gem Lake are marred by dams, and there's a cable tramway up the steep, narrow valley, all apparently for the benefit of non-hiking fishermen. Kind of destroys the pristine-nature aspect of things. 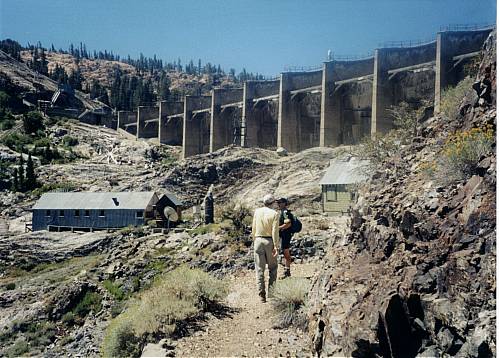 It's 3.2 miles to Gem Lake. We have the option of taking a longer loop up to Clark Lake, but we're tired and unmotivated, so we head back.

We return to Lee Vining and visit Mono Cone. Berg and Rich want to nap. We take our sleeping pads to the pine forest on the east side of the cinder cones, and snooze there for a bit.

By 4 PM we can't sleep. It's hot and Rich/Berg don't want more exercise, so we get in the car and drive south on 395. It's boring. Eventually we drive up the side road to the Obsidian Dome. I clamber up the scree and climb a 20' vertical obsidian gully. About halfway up I realize the big blocks of obsidian are loose, and am suddenly terrified by the prospect of dislodging a block and being buried under an avalanche of razor-sharp black glass. This doesn't happen, but I do slightly lacerate my hand and knee.

We arise at 5:15 AM, break camp, and are queued up at the rock slide at 6:30. The slide covers parts of the road for several hundred yards, and there's a sinkhole at one point. We arrive at the Tuolomne store at 7:20, but it doesn't open until 8 so we cook breakfast by Lembert Dome. We discuss heading for Cathedral Lakes but decide instead on Mt. Hoffman. We drive up the road to the May Lake trailhead and are hiking at 9:50 AM.

A part of Scots passes us descending, carrying a mind-numbing array of large coolers.

We follow the general route of our 1999 hike: past the lake, go left at fork, up gentle granite slopes to a grassy saddle, then up to the summit plateau. Here's how to make this route as easy as possible:

On the plateau, Berg has an epiphany of some sort. There are three rock towers, two on the cliff edge and one in the middle. I free-climb the middle tower (50', 5.2, scary). The right edge of the plateau is a precipice.

We saunter over to the summit block and climb up. Berg has some anxiety about the steepness, but gets to the top and is fine. There are lots of interesting people on top, including a large heavily-accented guy from New Jersey with two chatty daughters (10 and 12) and a retired couple from Santa Cruz.

We walk back to May Lake en masse, which makes the time pass quickly. At the caretaker's hut at May Lake you can buy lemonade and various desserts.

Looking up at the imposing cliffs, Berg is dumbfounded that he was able to reach the top, off-trail to boot. Unfortunately I lost my camera the previous day, so we have no photographic record (it later turned up on the floor of my car).