Recently I've been hankering to climb a high peak in the Sierras. For a while I had my sights set on Mt. Whitney (14,500') but it seemed too ambitious, and nobody would go with me. Mike O'Brien and I were recently looking over some maps, and the peaks around Tuolomne Meadows looked promising. Lynne and I returned Saturday night from a trip to Seattle (including a hike up Tiger Mountain, a pleasant wooded hill off I90) and, since the weather was beautiful, I proposed a one-day Sierra trip.

A web search suggested that Mt. Hoffman would be a good choice: closer and lower (10,850') than Mt. Dana (13,053'). Mike was away (exploring abandoned silver mines in Nevada) but I rounded up Rich Kraft, and he, Lynne and I hit the road 7 PM Monday, driving through the valley and up into the Sierra foothills. By 11 PM we were in Groveland, the last town before Yosemite, and stayed at a funky motel of mobile homes and teepees. I was insomniac and didn't sleep; Lynne slept a few hours.

So next morning I felt pretty bleary-eyed as we drove into the park. We reached the May Lake trailhead at noon. On the 1.2 mile walk up to the lake (9,270'). 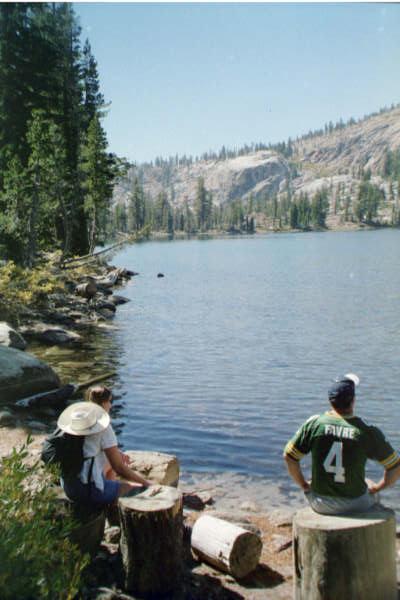 We could feel the altitude; our hearts were thumping. The topo map didn't indicate a trail to the summit, so we bushwacked. We walked past the lake and turned off the trail, heading through scrubby pines towards a notch well to the right (south) of the peak.

At this point it was a bit late (1 PM), the peak looked REALLY far away, and Rich and Lynne were stopping often, so I took off on my own. I headed diagonally up a granite slope towards the notch, and crossed a steep-walled ravine. 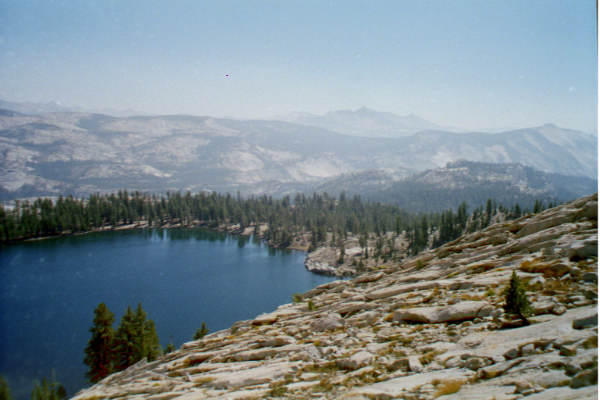 In about 15 minutes I reached the pass. From here I could see a high bluff with a traverse to the peak. I climbed the back (away from the lake) side of the bluff, which was a steep slope of large boulders, occasional class 3 climbing required, looking straight up into the sun, easy but tiring.

At the top there was a large tundra plateau with several large rock outcroppings (Rich called them 'castles'). At the north end of the plateau was the peak itself, a pyramid of large staircased sheets of granite with a weather station at the top. 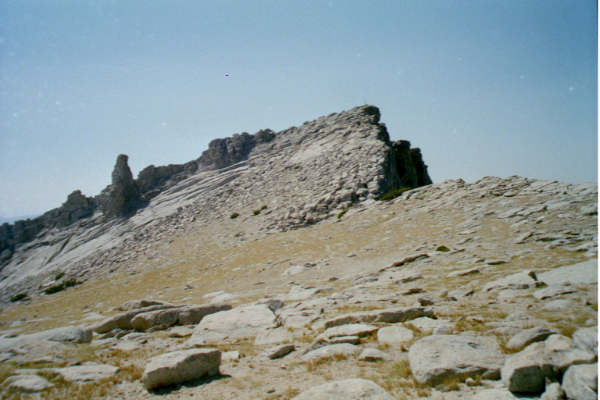 I was at the summit at 2:15 PM, about 2 hours ahead of schedule. On the east side of the summit was a sheer cliff, dropping off at least 1000' to some beautiful blue/green lakes.

At this point I realized that Rich and Lynne could reach the peak easily, and I tried to figure out how to locate them. The weather was totally calm, and my shouts echoed off rocks hundreds of yards away, but no answer. A well-marked trail led towards the west edge of the plateau, apparently leading directly down to the lake. I explored this trail a bit, then decided to retrace my steps, hoping that Rich and Lynne had followed my route. I recrossed the plateau, turned a corner, and much to my delight saw Lynne standing triumphantly atop one of the outcroppings, with Rich nearby on the other. They thought they had reached the summit; I told them they weren't quite there yet, and led them to the top. 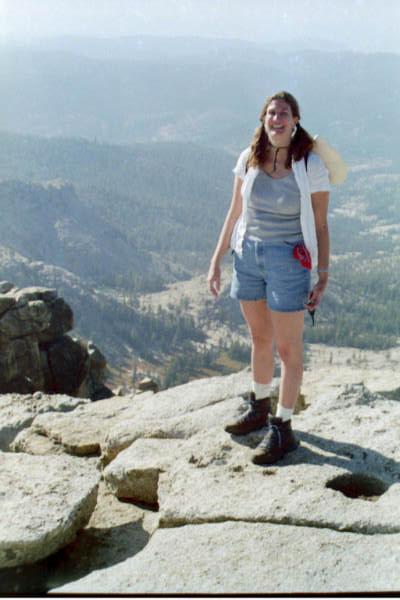 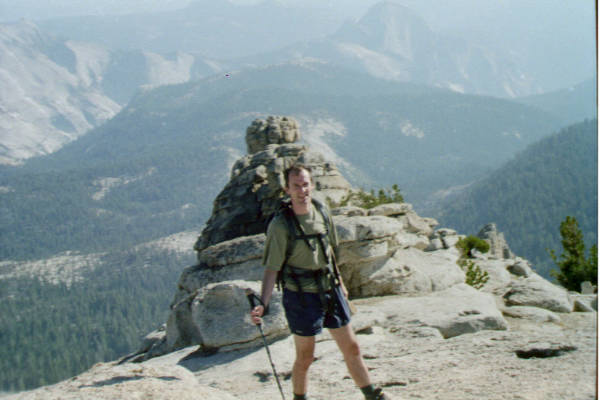 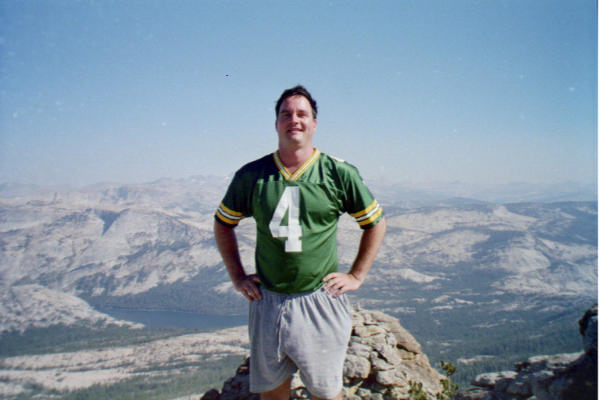 All of us felt quite strong, and we enjoyed about 20 minutes on the summit, from which were visible Half Dome, the Minarets, and countless other peaks in all directions. 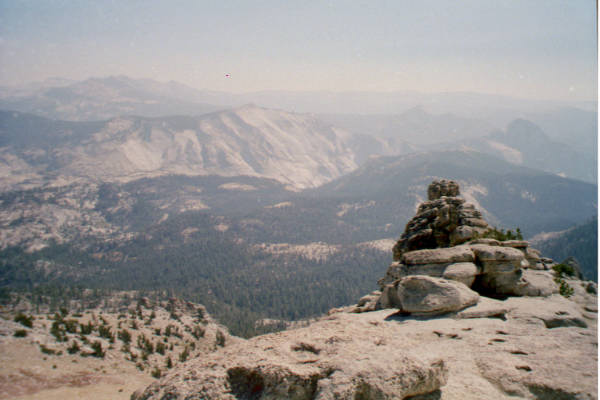 As we left the peak we encountered the only other climber we saw all day, a nut case who made some comment about right-of-way (on a slope about 100 yards wide) as we passed. We took the trail down, which was quite scenic 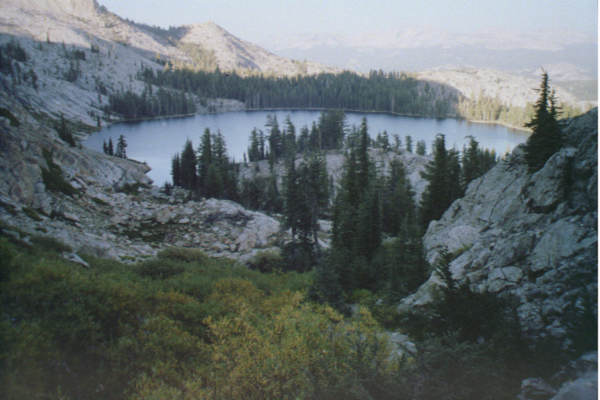 but long; it went wide of the lake and doubled back. The last leg, from the lake back to the car, seemed to take forever. Rich was chilled (he had recently had a cold) and Lynne had giant blisters on both heels and toes. She had some vertigo (dizziness when looking up or down) all day because of the altitude. I felt all-over sore but generally good, no headache or nauseau.

The drive back through Tuolomne, in twilight, was quite beautiful. We stopped at Groveland's Iron Horse Grill for a great dinner and, thanks to a couple of extremely long games of Vermicelli (halvah) and Bratislava (Temescal) we were back in Berkeley seemingly in the blink of an eye. All in all, the best 1-day trip I can imagine. And today I can think of nothing but being up in the mountains again.