Lynne, Rich and I drove to Mt. Lassen National Park, a 5 hour drive from Berkeley, stopping in Red Bluff on Friday night. A local band was playing 70's covers at the Palomino.

Saturday morning we drove into the park. A huge fire was burning near Redding, 30 miles to the north. We saw the pillar of smoke, which spread out over the entire valley, but didn't extend up into the mountains.

We toured Bumpass Hell, a 'geothermal carnival' of bubbling sulphur pits, mudpots, fumaroles, and all manner of other nasty things. Named after one Kendall Vanhook Bumpass, who lost a leg after stepping into a boiling pit. 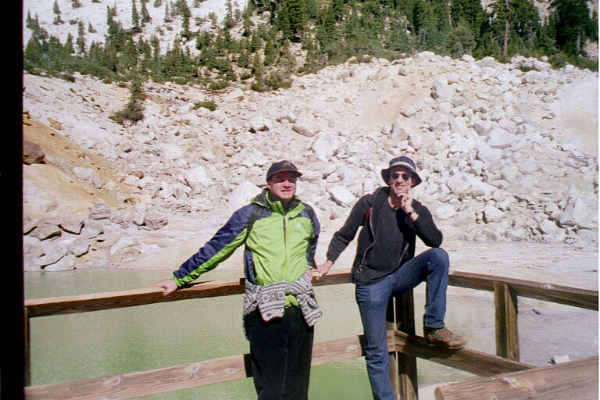 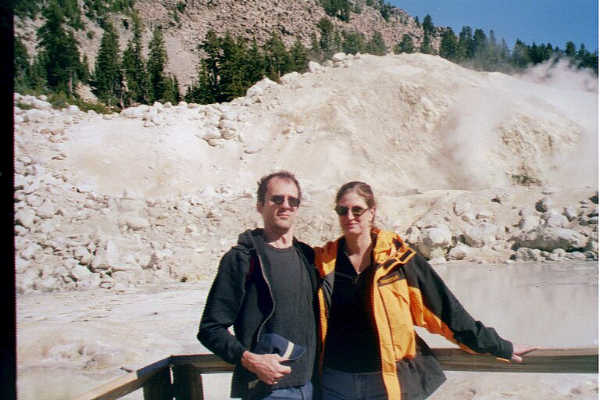 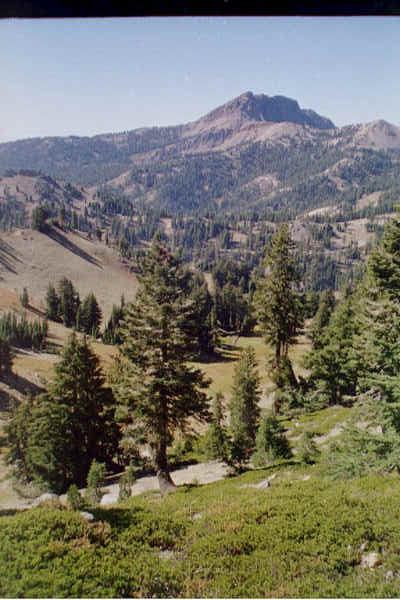 Then we drove north out of the park, stopping briefly at Manzanita Lake, ate at Indian John's Cafe in Old Station, reentered the park on a long dirt road, and went on a hike that covered the Fantastic Lava Beds, the Painted Dunes, and the Giant Cinder Cone. 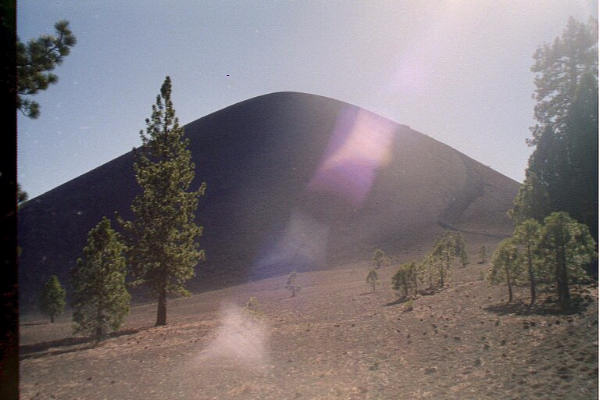 The Giant Cinder Cone is 800 feet high. The path can be seen to the right. 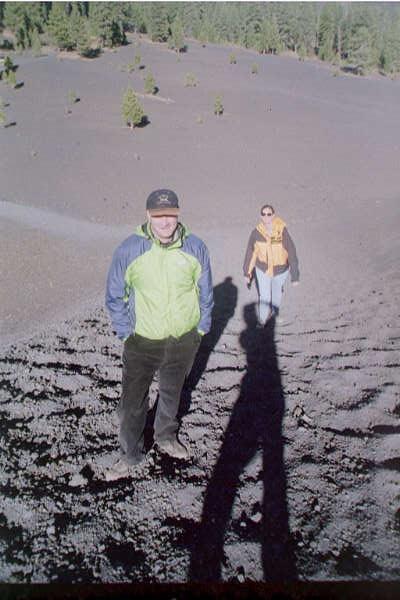 The climb is steep and slippery. Lynne had a pulled muscle. 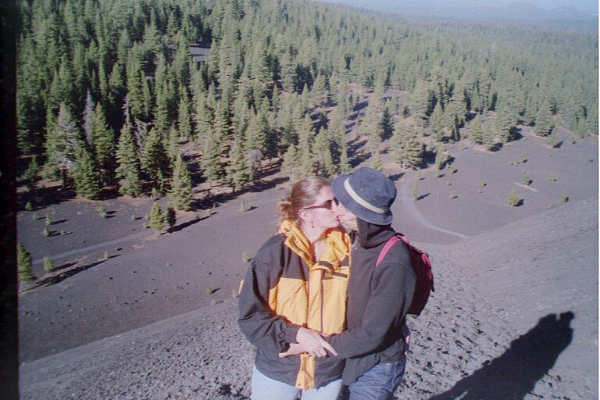 Lynne needed some encouragement on the way up. 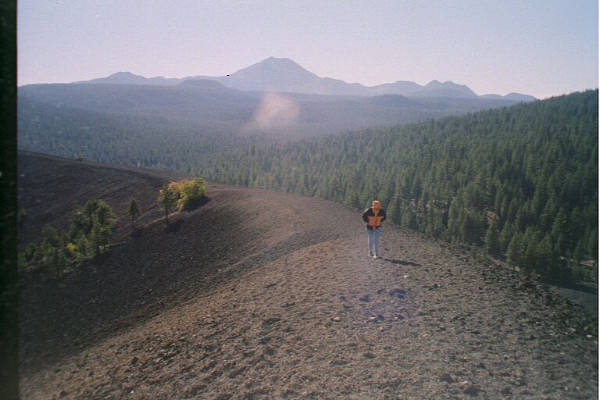 There's a huge crater in the middle of the cone. Lynne walks along the rim. 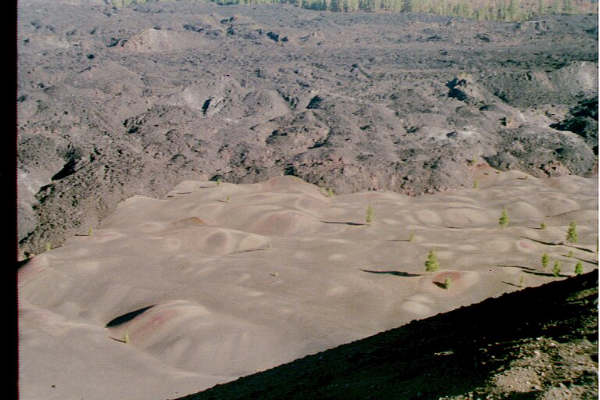 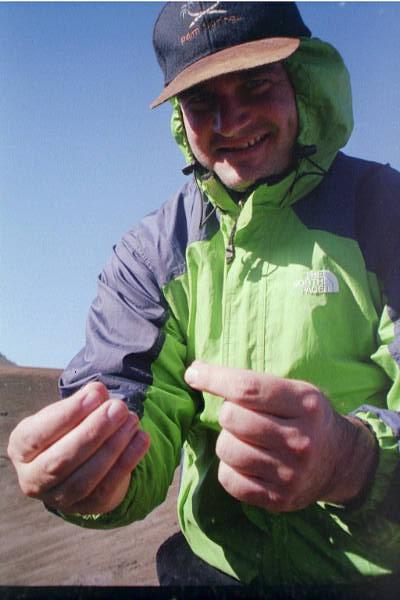 There was an astonishing density of spider webs on the cone, both clinging to the ground and floating in the air. Here Richard holds a web. 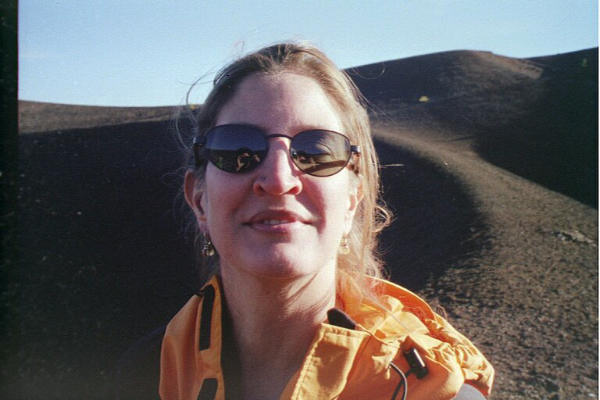 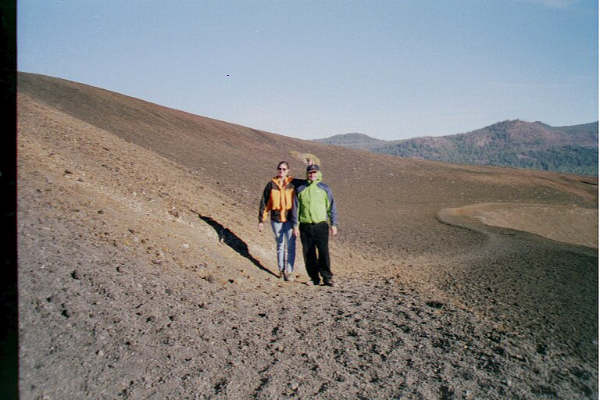 Leaving the cinder cone area, we drove past the Hat Creek Radio Observatory to the town of Burney, checked into a motel, hot-tubbed, and had giant steaks at Mo's Place.

The next morning, after an extremely long wait for our eggs and hash browns at Mo's Place, we toured the Subway Caves (not overly interesting). Across the highway was a campground and a charming trail next to Hat Creek. We wandered downstream for a mile, then crossed on a fallen log and returned. 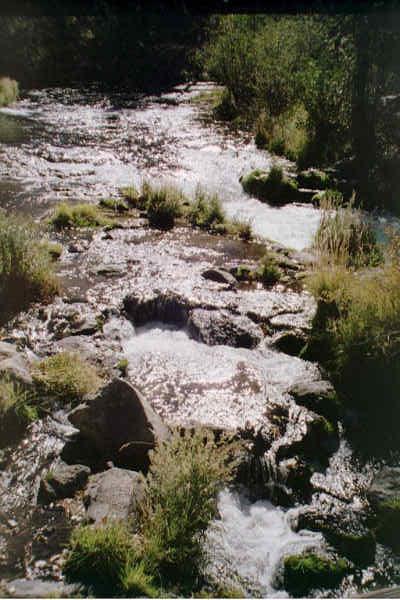 At this point preferences diverged. I had a fairly strong desire to climb Mt. Lassen, while Rich wanted to stroll and meander through lush meadows, babbling brooks etc. Lynne probably would have preferred the peak, but (bless her heart) she kept Rich company while I did my thing.

They dropped me off at the Lassen trailhead at 1:30 PM. The round trip is nominally 4 hours; I was given a 2.5 hour time limit. 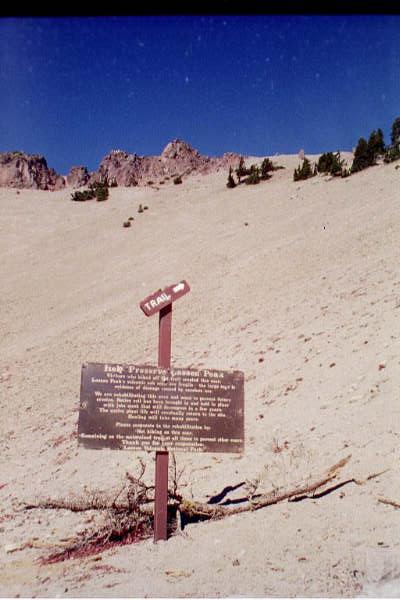 The first turn in the trail. It's possible, but illegal, to go straight up the slope. 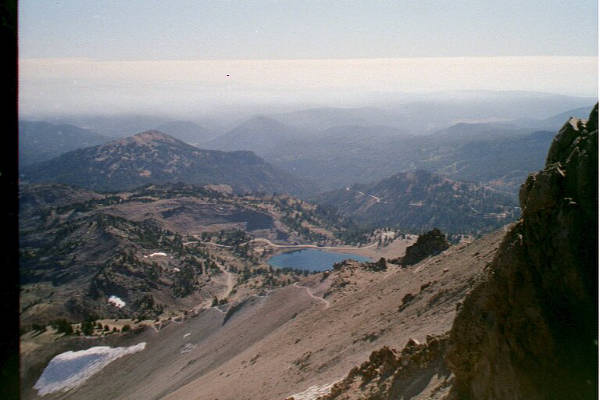 The summit path zigzags along the ridge. At the base of the mountain is Lake Helen, and the road is behind it. Smoke from the Redding fire is visible.

The summit features a rock tower; a little climbing is needed to get to the very top. Nearby is lots of volcanic rubble, and a suncupped snowfield. 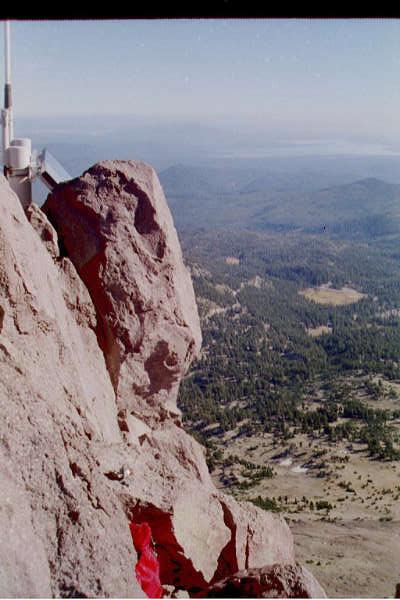 A solar-powered gizmo at the summit. Lynne's tiny red pack, which she loaned me, is on the rock. 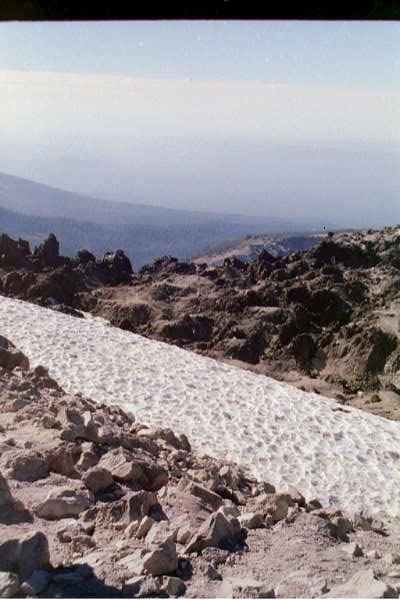 I dawdled for 30 minutes, then descended at a fairly leisurely pace and was back at the parking lot 15 minutes early. Rich and Lynne had a good meadow experience.

In the valley, driving back to Sacramento, there were hundreds of giant goose/duck formations flying various directions, mostly north. Maybe they were confused by the smoke.

We stopped in Sacramento, attempted to visit a church that Lynne restored (closed), and had dinner at an unexpectedly pricey Japanese place, Fuji.

The general consensus was that there had been too much driving. Consider stretching the trip out to 3-4 days.