These days I'm writing some code for PanoSETI, a project that's building a new type of telescope. It was decided to locate the PanoSETI prototype at Lick Observatory, on Mt. Hamilton in the mountains above San Jose.

The prototype consists of two telescopes about 2800' apart, so that parallax can be used to distinguish between atmosphere and space. One of these telescopes has been there for a year or so, housed in a dome that also holds the (no longer used) Astrograph telescope. 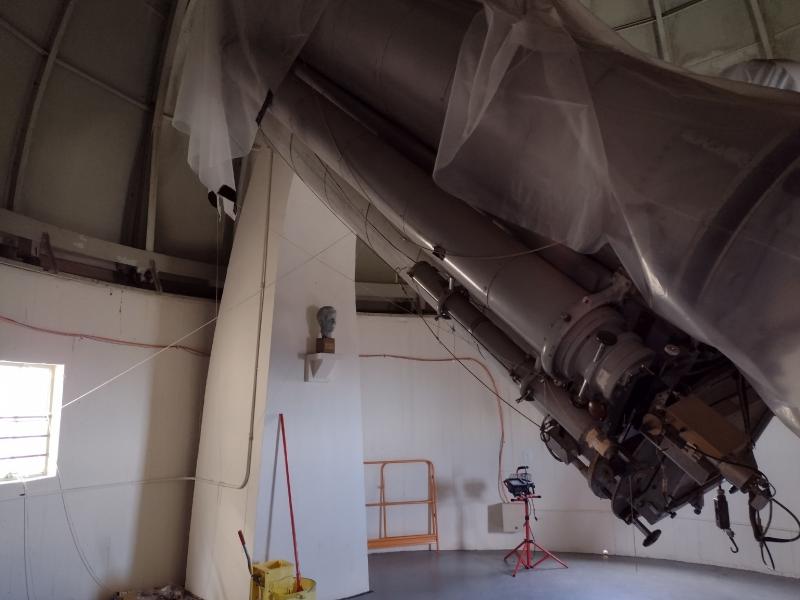 Astrograph is 2 telescopes: one sees red, the other blue

The other was recently added, in a new mini-dome. 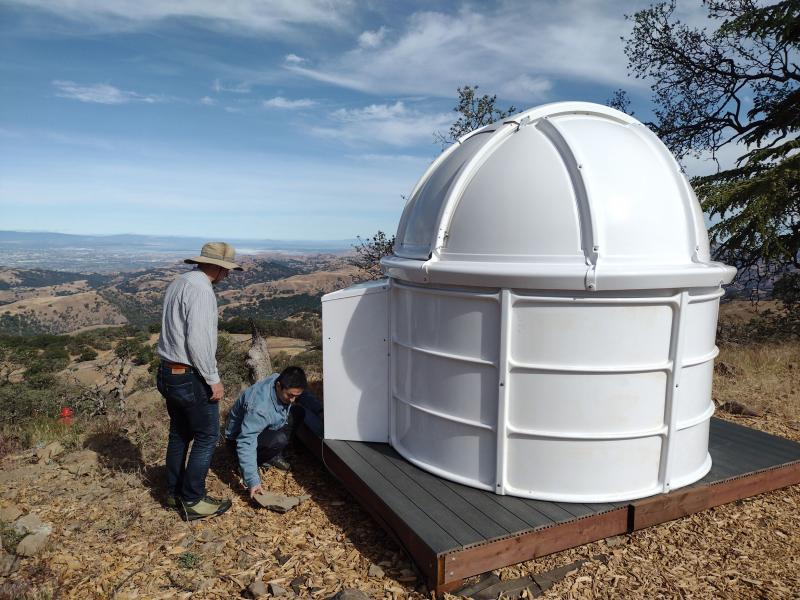 The two domes need to be connected by a fiber optic cable - not a trivial matter because of steep, rugged terrain and various environmental threats. But eventually we came up with a plan, and today I went up to Lick with my colleagues Dan W., Wei and Nico to carry it out.

The cable consists of 12 fibers, encased in layers of nylon, steel and plastic. It resembles 1/2" plastic water pipe. We have about 3200' of cable was on a wooden spool, weighing about 300 pounds. 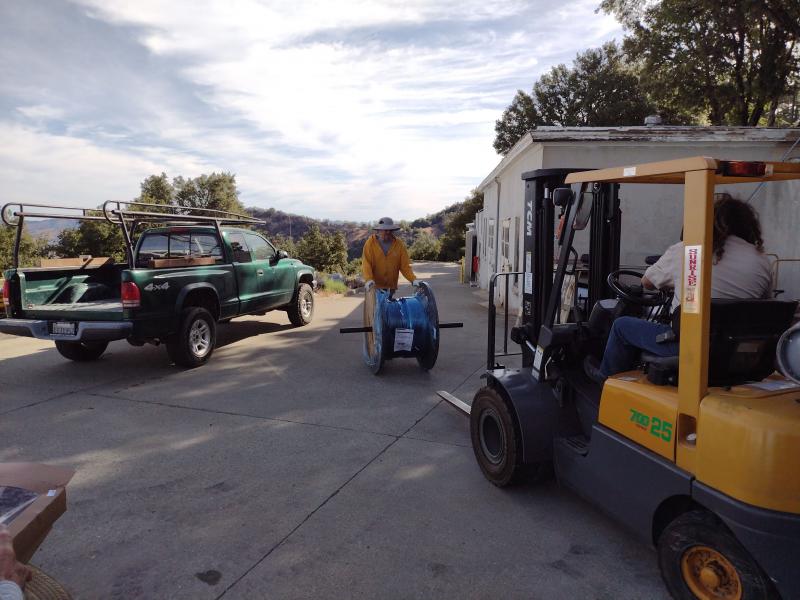 Starting at the new (lower) dome, we unspool cable from the slowly-moving truck, positioning it as far from the road as we can. At a couple of points the cable crosses the road; the staff has cut small trenches in the pavement for this purpose. At one point we have to shift between two roads separated by a steep embankement. We unload the spool from the truck, run a rope through the pipe, and use a truck-mounted winch to lower it down the slope. 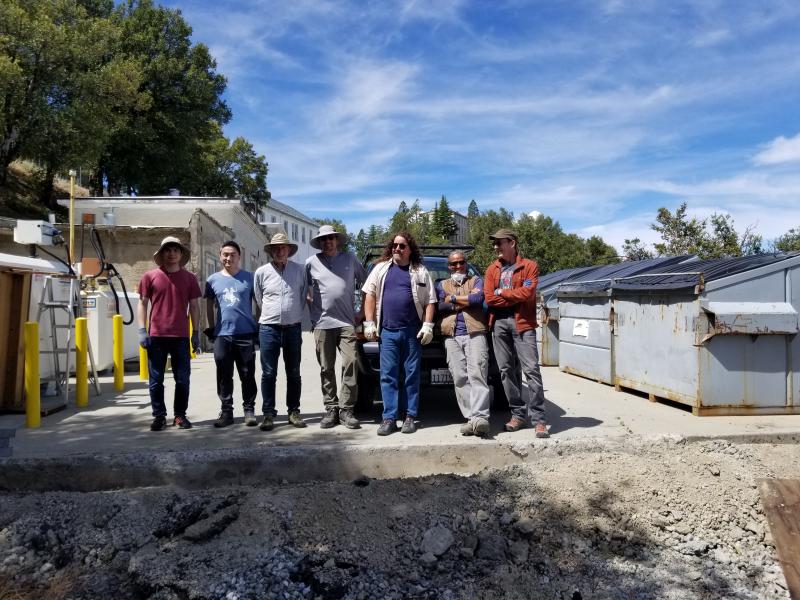 Group photo; I'm on the right

A friendly woman, Laurie, follows along taking lots of pictures. She turns out to the the wife of Remington Stone, the former observatory director.

Eventually we reach the end of the road, and we have to run the cable up a steep 500' brush-covered hillside, over a hilltop, and down another 100' to the Astrograph dome.

At this point we improvise. First, we unwind the remaining 800' of cable from the spool onto the ground. 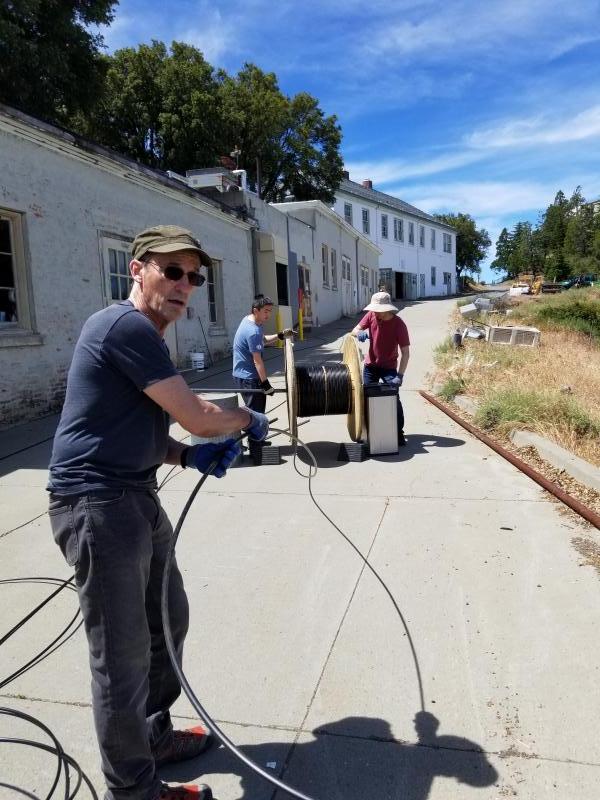 Me helping to unroll cable 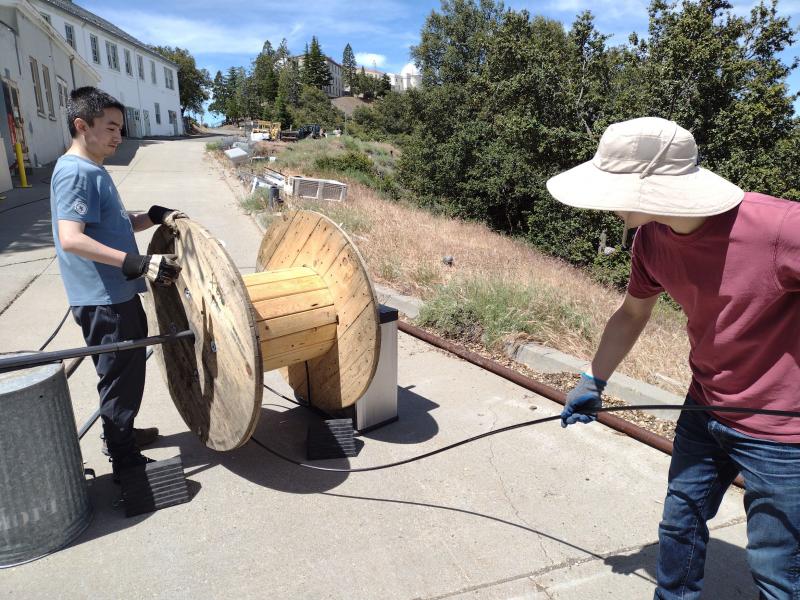 Then I grab the end of the cable and start up the hillside. Joe (one of the staff guys) has thoughfully chalked some arrows where he thinks the best route is, and I pretty much follow these. The other guys pull the cable at various distances behind me. The cable is fairly rigid and has little friction, so this isn't that hard to do.

Eventually we get all the cable to the Astrograph dome. 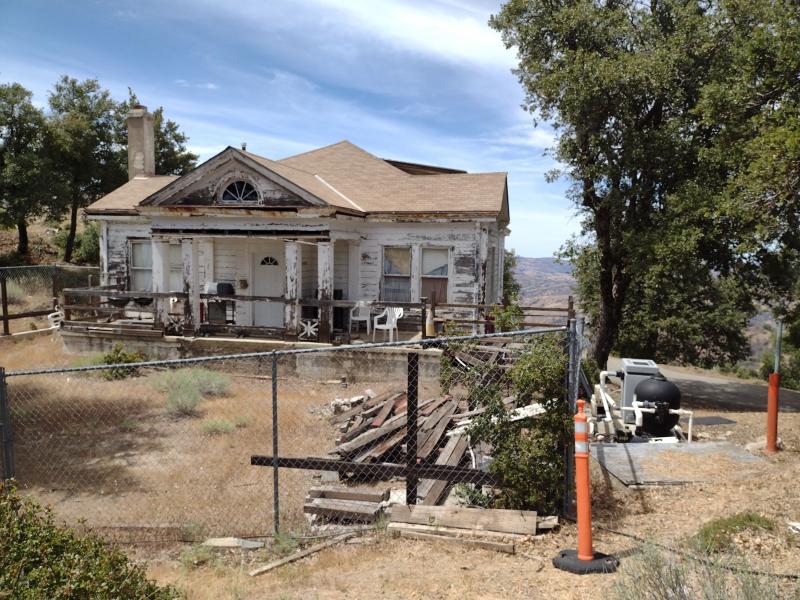 We cut off about 160' of excess, then feed the end into a hole in the wall, sealed with putty. 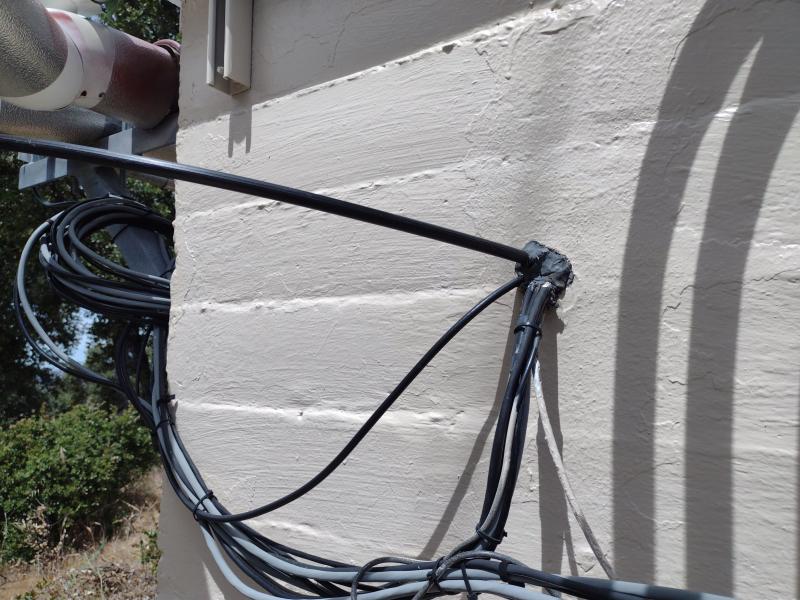 Wei successfully fuses the end of the cable to an optical connector, and we use a device called an Optical Time Domain Reflectometer to check that the cable is unbroken all the way to the other end. Later that evening Wei fuses the other end too, and data is sent over the cable - woo hoo! 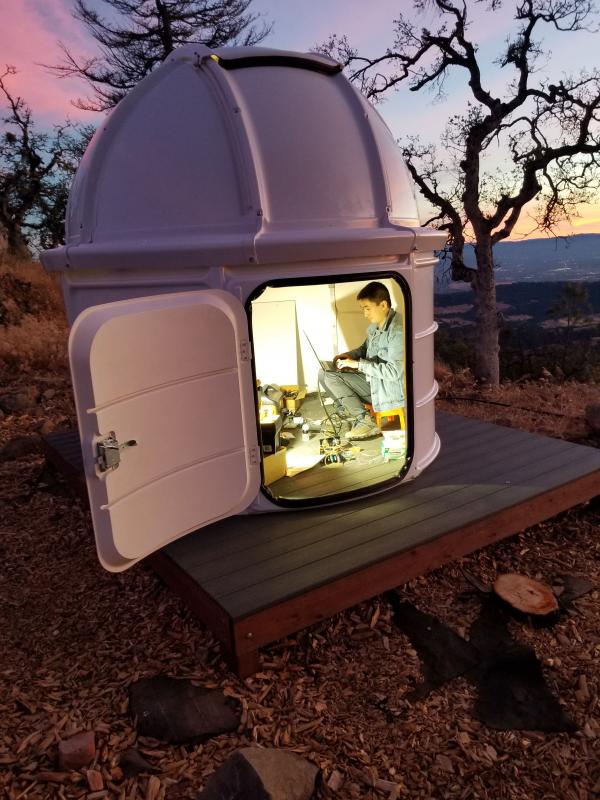 Dan takes me and Nico for a tour of the observatory, which has ten or so telescopes of different sizes and ages. 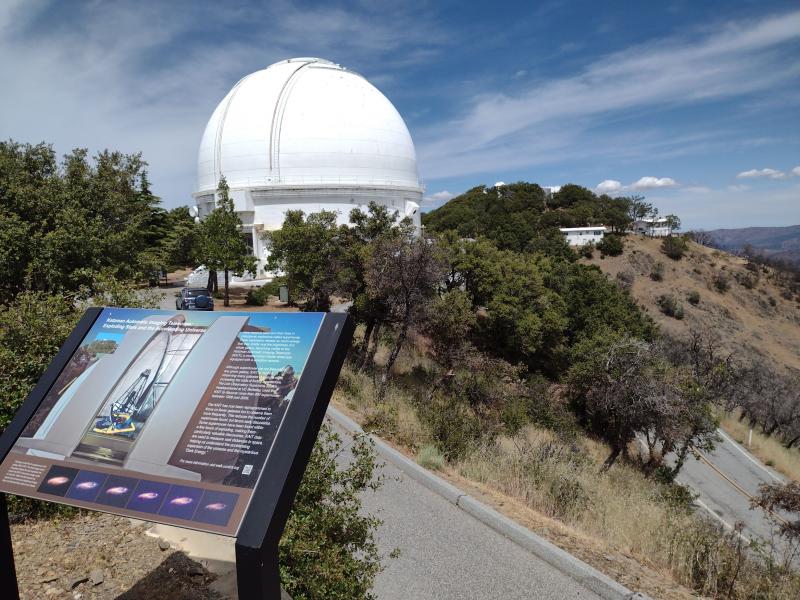 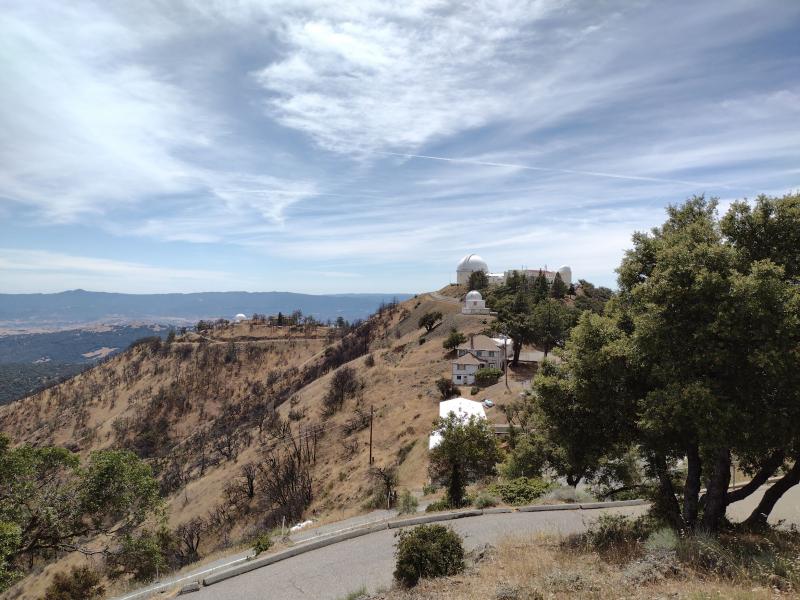 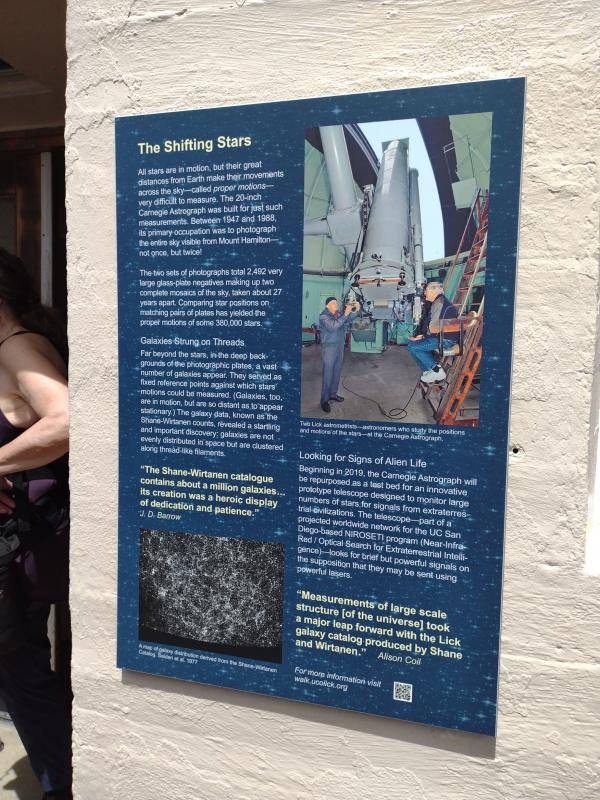 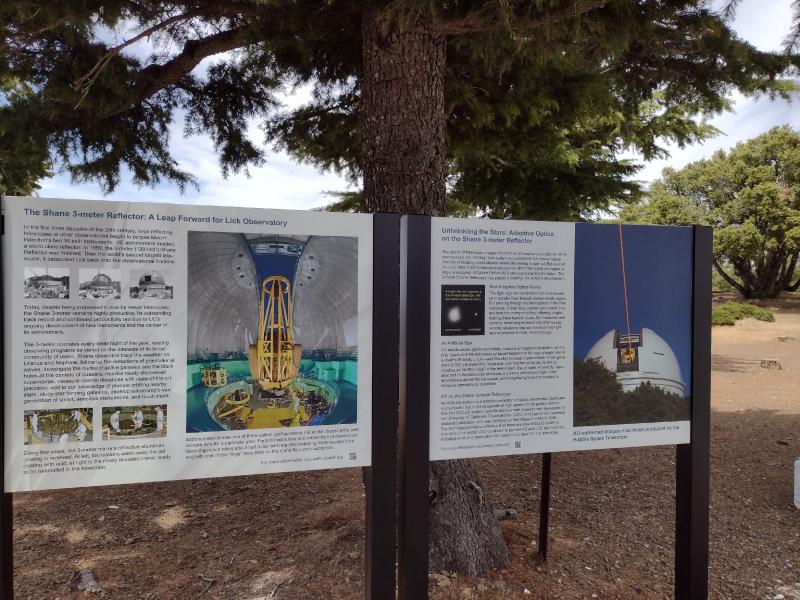 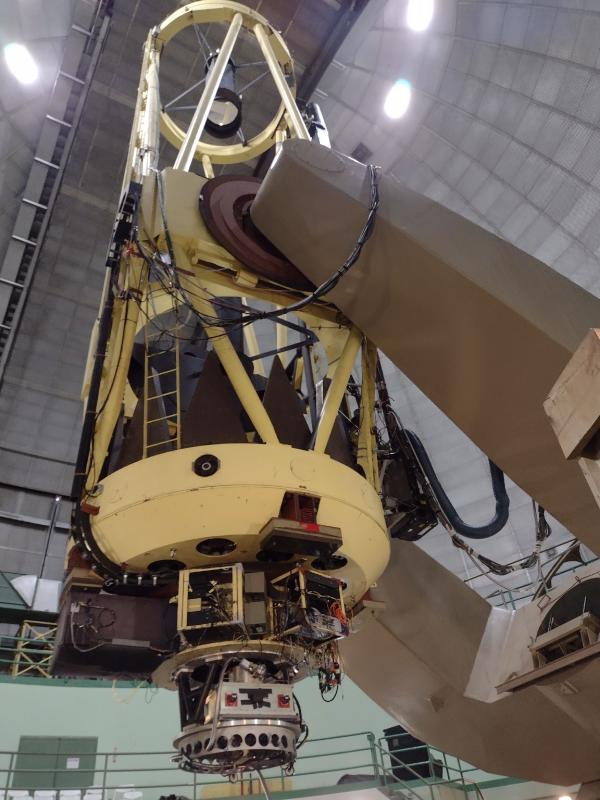 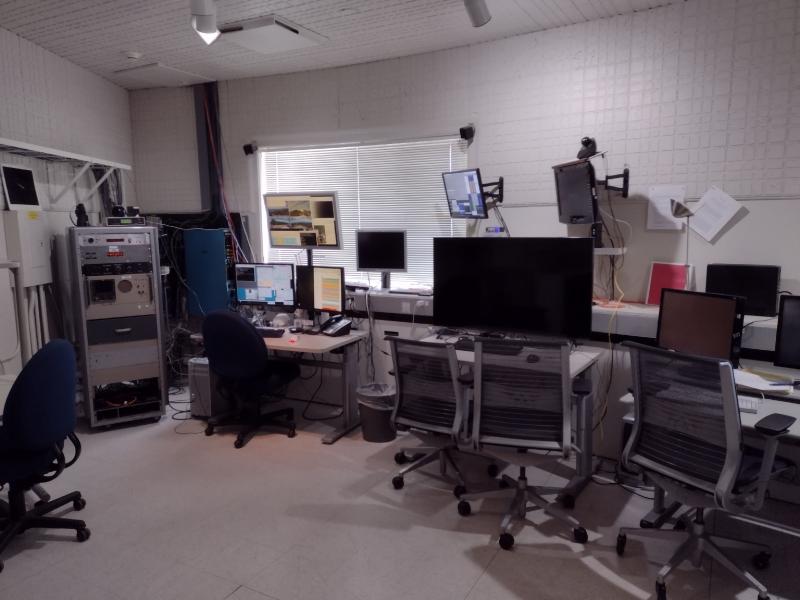 Control room of the above 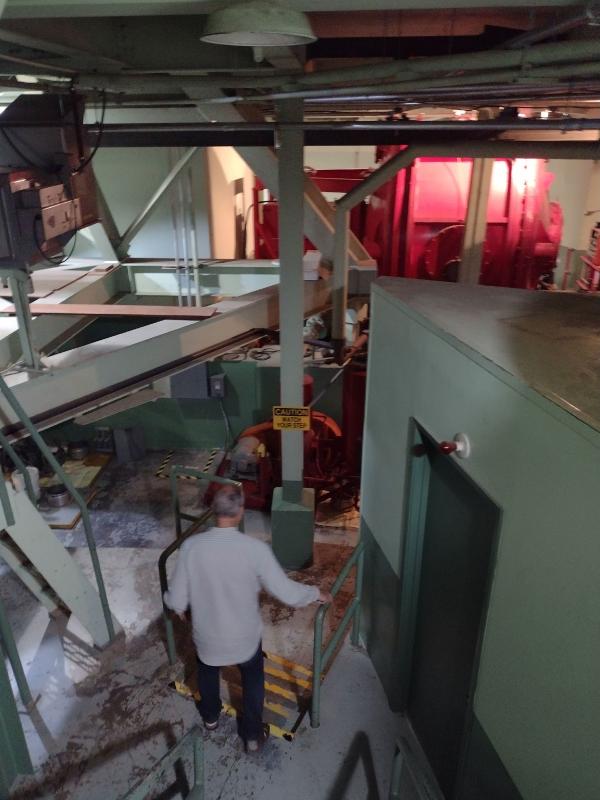 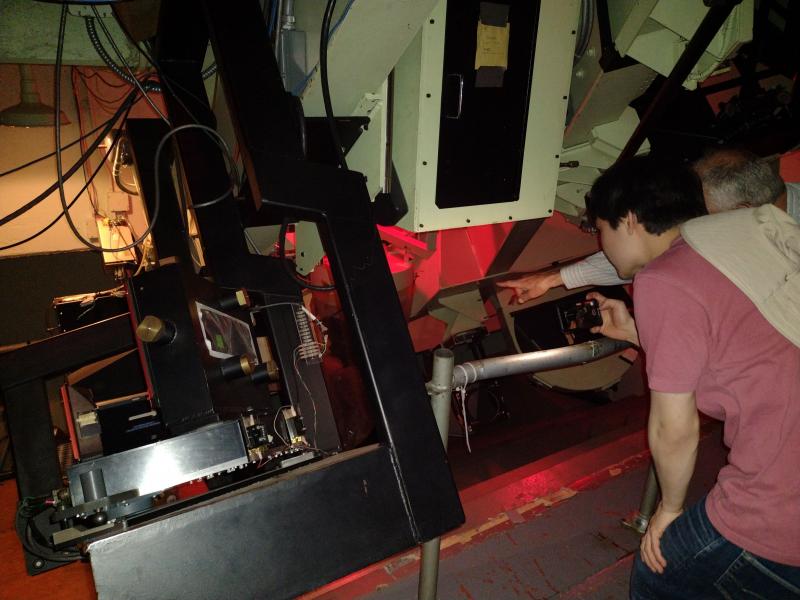 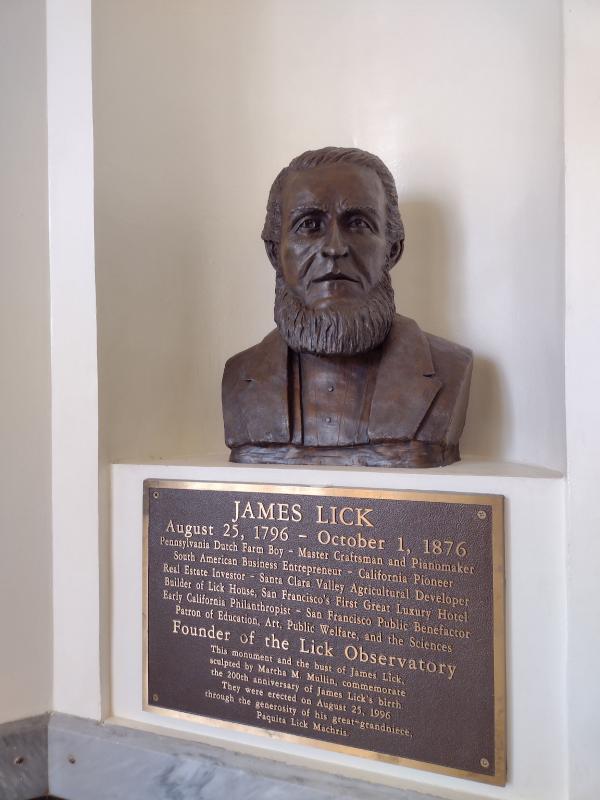 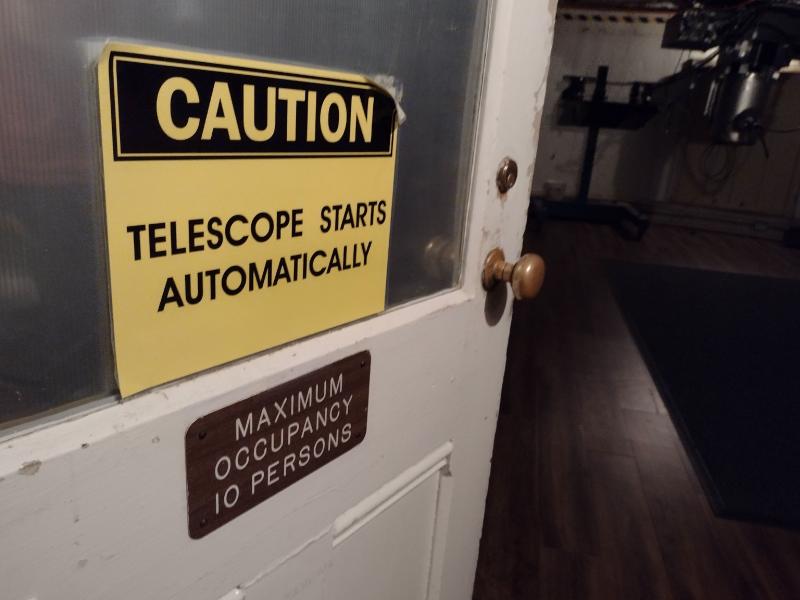 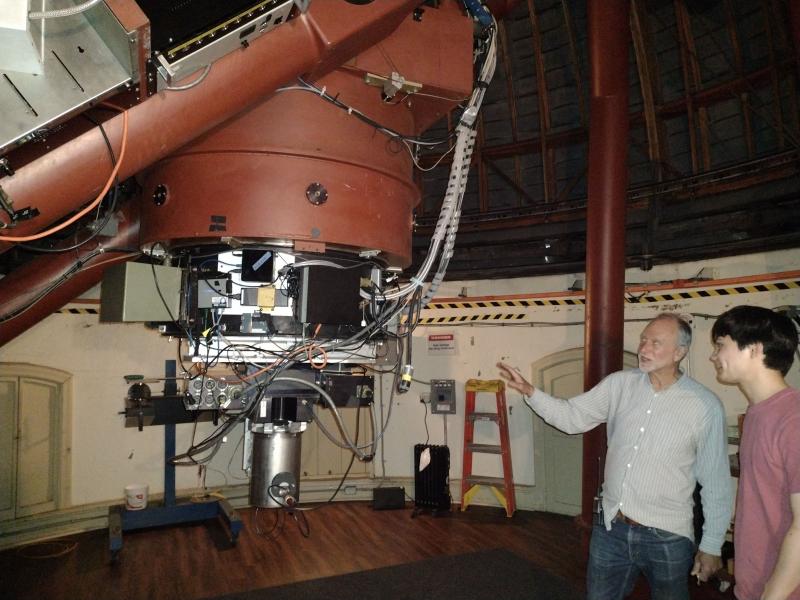 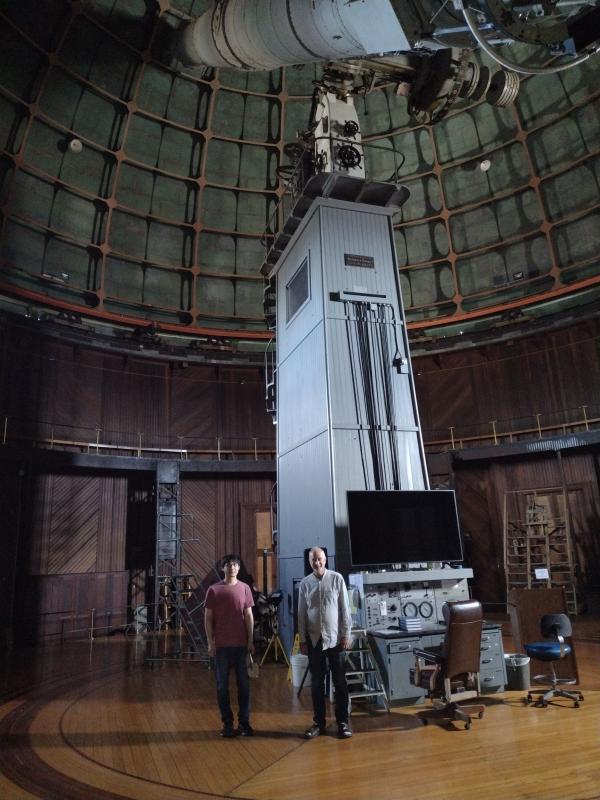 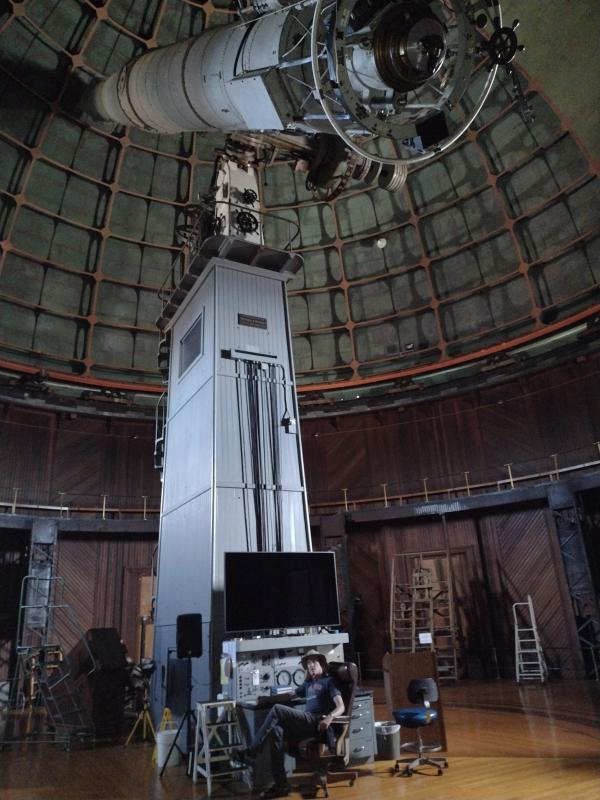 Nico and I set out for Berkeley around 4 PM. About halfway down Mt. Hamilton Road (very winding) a big rig has gotten stuck going around an uphill hairpin turn; the "landing gear" legs on the trailer have scraped and dug into the asphalt, and the truck can't move. There isn't room to get around it. The truck driver has no idea of when or how it might be freed. And we can't see Google Maps because there's no phone signal.

Things look bleak. Fortunately right at that moment two PG&E trucks pull up. Some young and competent-looking guys get out and look at the big rig. One of them tells me there's a side-road a couple of miles back (Quimby Rd., possibly named after the Simpsons character) that ends up in San Jose. So I follow him, and sure enough we end up back on the freeway and make it home in time for dinner.