NOTE: I later discovered that we ended up on Mt. Baldy, not Lion's Head Peak. Ron and I climbed the latter in June 2001.

Every summer, my college friend Ron Kuivila spends a month at his in-law's cabin near West Yellowstone, Montana. This year I joined him for 5 days there, along with our mutual friend Dave Weinberg. The general concept: a stout summit of grizzled warriors, a rented 4-wheel drive vehicle, beer-drinking, belching, cussing, and contentious arguments about the music of Sorabji, the late Pakistani/English composer.

The visit was all-around wonderful. We did all sorts of stuff, but the centerpiece was The Hike from Hell.

It had been agreed that we would do a challenging hike. Ron had identified Lion's Head Peak, in the Targhee range a few miles west of the cabin, as a good target. The peak is on the continental divide at about 10,100 feet. The map showed a trail circling its base, but none to the peak.

We drove our Jeep up an access road and started hiking around 10:30 AM. Several ridges separated us from the mountain itself. We followed a trail that led toward the peak. This trail went up a steep hill and petered out, and we were 'bushwhacking' across alpine meadows.

The meadows were beautiful. They were filled with yellow, red and purple flowers. We were concerned about bears, and made lots of noise (clapping, shouting) as we went. Cruelly, Ron and I shouted suggestions to the bears that they eat Weinberg first. 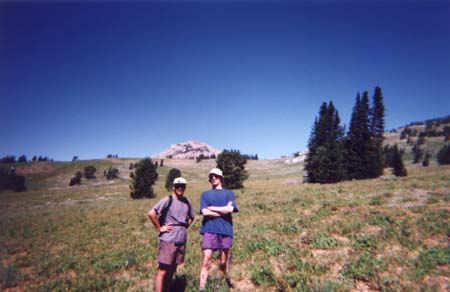 (Lion's Head Peak in the background)


As we gained altitude, we looked East towards Yellowstone Park. The view was vast and stunning. In the distance (50 miles) we could see the Grand Tetons.

We came out onto a broad downwards slope. At the bottom of the valley there were a few mule deer (large tawny animals with white rumps) and as we descended the slope they heard us and moved off; more appeared from behind trees, and in all there were about 40 of them.

We spotted a hint of a trail leading up the other side of the valley and headed towards it. This trail fizzled out after a quarter mile, leaving us at the bottom edge of a vast meadow that was ruled at 50-foot intervals with transverse ditches. These baffled us - was this part of a long-defunct ski area? In any case, they were a pain to cross.

We reached the top of the 'ski meadow' around noon. The peak looked much larger and, paradoxically, more distant than it had earlier. We were still separated from it by an immense valley that dead-ended on a high ridge that led to the peak. At this point I knew we weren't going to reach the top.

We found a trail remnant along the near slope of the valley. The trail was narrow (just a few inches wide) and the slope was very steep, so total concentration on balance was needed. Tiny slips caused panicky lunges.

We finally reached the valley floor. The peak itself now loomed 2 or 3 thousand feet above us. There appeared to be a trail cutting diagonally up its lower slope, towards the left shoulder. We scrambled through a stretch of brush and found the trail, which was extremely tenuous and steep. A brutal 45-minute stretch brought us to a rock outcrop with a commanding view. It was about 1:30. We stopped and ate our meager rations (Ron, grossly misjudging the length of the hike, had packed one half sandwich each, and water was limited).

Weinberg, who was losing his mental focus, decided to stop at this point and rest. 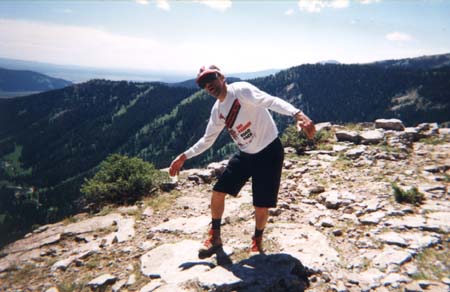 Ron and I continued up the trail. It rose steeply a few hundred feet and leveled out; it appeared to be circling the peak, not ascending it. So we left the trail and started up a steep, narrow rockslide valley. 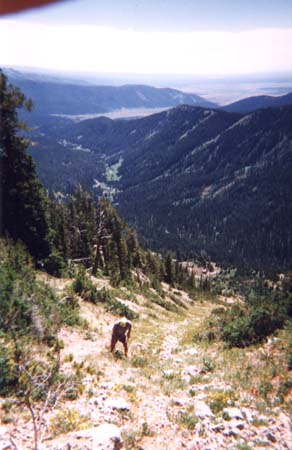 This went a few hundred feet up and ended in a scree field: sharp-edged rectangular rocks critically balanced on a slope so that each footstep triggered a disturbing shifting and clatter.

Suddenly we both felt the pall of real danger. We decided to reach the next large outcrop, 100 feet away, and go back.

We rested on the outcrop. The peak still looked at least half a mile away, and from our position was surrounded by sheer cliffs one or two hundred feet high. Even if we had had time and energy left, I don't know how we could have proceeded. I took off my boots and socks, which were sweaty and starting to blister my toes.

We rested five minutes and started down. Ron lost his confidence on the scree and slowed to a crawl. 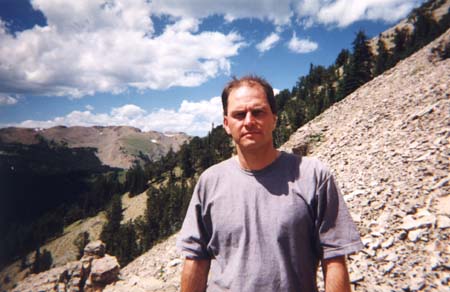 I got impatient and sort of skiied down it; Ron followed. I went first down the rockslide valley. About halfway down I heard Ron shouting to me. He had dislodged a large disk-shaped rock, which was rolling at an alarming speed straight towards me. I moved a few feet to the side and it whizzed past. Ron decided to stay where he was until I reached the bottom.

At 3:00 we met up with Weinberg, who had enjoyed a nice rest (he was perky for the rest of the hike, in fact). I, on the other hand, was dog-tired. My blood sugar was down to zero and I was parched.

The return trip seemed to take forever. As my energy level waned, my brain gradually shut down. I focused on the ground immediately in front of me. I was unable to think about navigational issues - I asked Ron to please tell me which way to go. Ron did an excellent job of navigating, although we drifted from our original path and there were some moments of uncertainty. I was way too tired to make bear-warning noises; in fact, death by bear-jaws seemed like a possibly good thing.

For about the last hour of the hike, I felt like I was trapped in a nightmare, and yearned to wake up and find myself in a warm, soft bed. But we all just struggled on, and at about 5:30 we made it back to the jeep. We went home, drank lots of liquid, and took a nap.

That evening we went to the IMAX theater in West Yellowstone and saw, appropriately, 'Everest'. The film documented an expedition that made the ascent immediately after the one where everyone froze to death, a couple of years ago. Ron, Dave and I agreed that we had no interest in climbing Everest. A return to Lion's Head Peak, however, is a distinct possibility. We plan on taking mountain bikes, to get as close to the peak as possible and reduce the walking mileage. Also we need to find a topo map. This may happen next summer.