Noah and I rent a cabin near Mt. Rose (near Lake Tahoe, on the Nevada side) with our friends Tara and Chris, and their three kids.

There has been no snow for almost a month, and Noah is concerned that there won't be any still on the ground. So when we see a bunch of snow next to the highway around Donner Pass, Noah is very excited; we get off the highway, park at the base of a hill, cross a frozen stream, and climb a hundred yards or so up the hill. 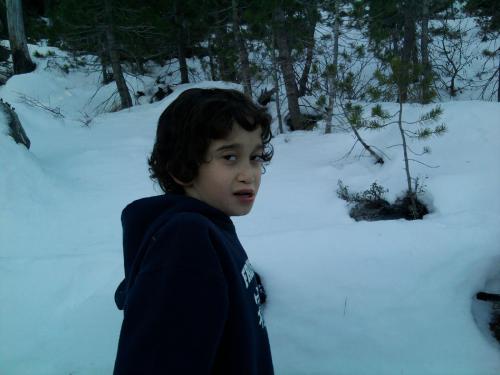 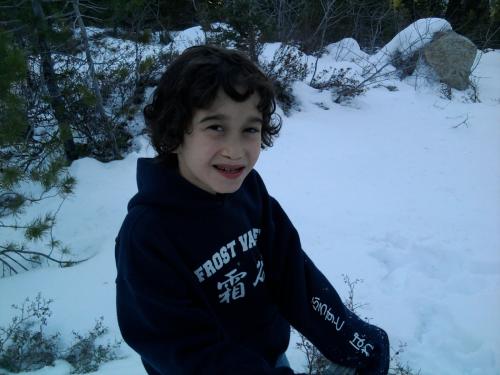 The snow is about 2' deep. Noah is wearing rubber rain boots, which immediately fill with snow. We empty them a few times, and in the end I carry him down on my back.

Noah and I arrive at the cabin around 4 PM. It's a nice big place, just down the road from the Mt. Rose ski area, with a spectacular view of the valley south of Reno. It's on a dirt road with a few other cabins. Across the road is a small ski area, not operational. Noah wants to climb the snow-covered slope, which is about 400' vertical. We head up. It's cold, and the snow is dry and slippery. I'm floundering, but Noah is able to move fairly quickly. It's getting dark as we near the top. I stop, exhausted, but Noah goes on another 100' or so. I put on my headlamp and we descend in deep twilight.

Tara and family arrive, the kids mingle, and we have tacos.

Friday: we go to the ski area. I want to put Noah in a 9-11 AM lesson, but due to oddly incompetent staff we stand in line forever and settle for the 11:30 class. Noah and I go to the snack bar, where I lose his rental helmet and my ski gloves. They give us another helmet, and I don't find my gloves but steal another pair from the lost and found (what are the ethics here?).

While Noah's in the class I ski as much as I possibly can - the beginner run to warm up (I haven't skied in ~8 years) then many rides on the intermediate runs. I'm definitely ready for a black diamond, but they're closed due to lack of snow.

I pick up Noah from class and do 2 laps with him on the bunny slope. Then we take 2 chair lifts to the top of a very long beginner run. Unfortunately it has a couple of stretches that are a bit too steep for Noah, whose snow-plowing power is limited. He falls repeatedly and is slightly traumatized, but makes it down.

I cook spaghetti for dinner.

We drive to the trailhead, which has bathrooms and a large parking lot. We're hiking at 9:20 AM. The trail rises quickly and offers great views of Lake Tahoe. 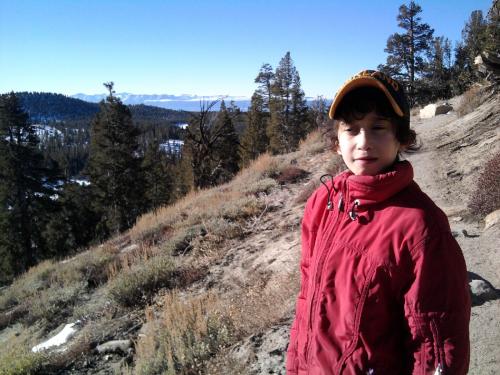 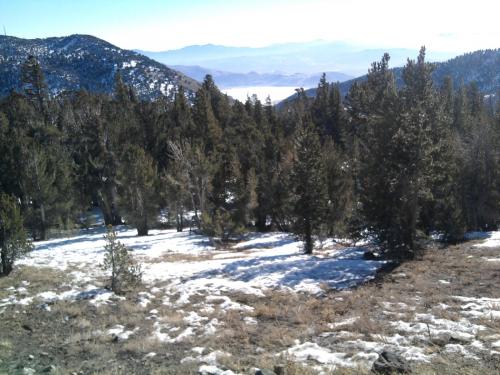 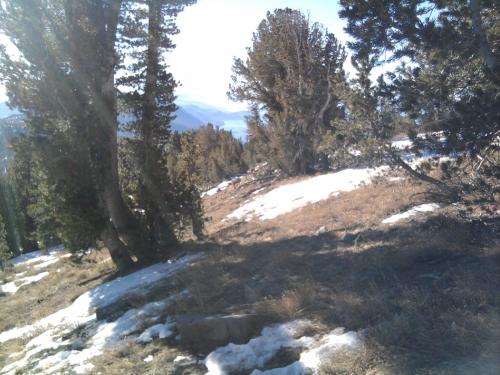 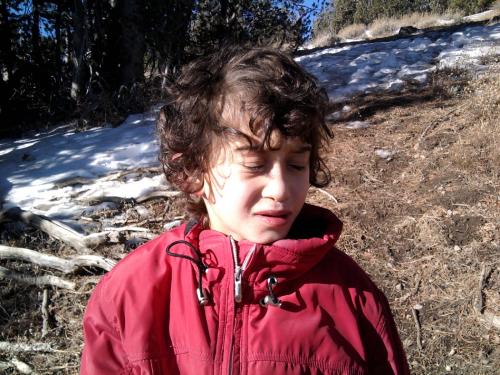 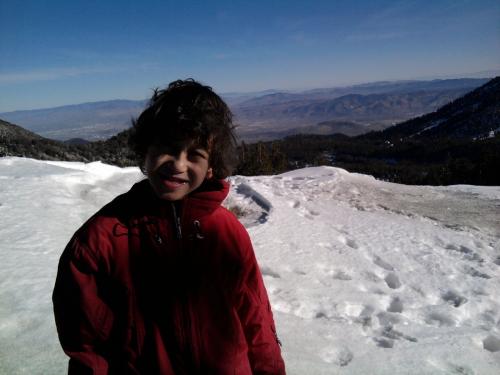 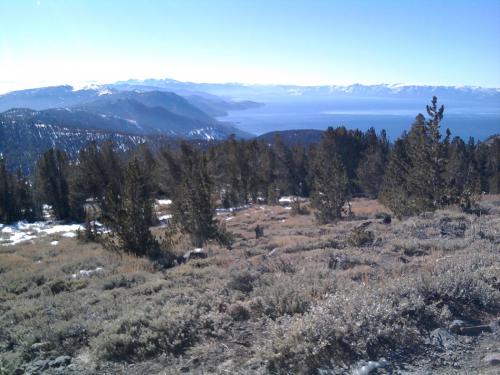 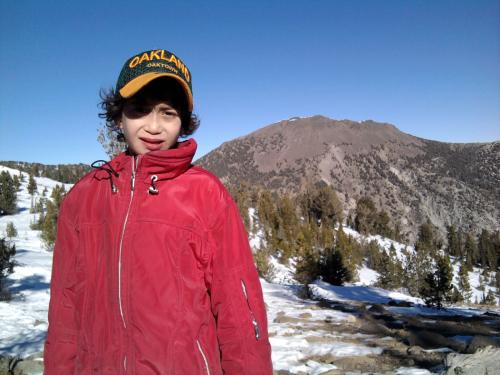 Mt. Rose in background, about 2 miles away; no way could we make it there 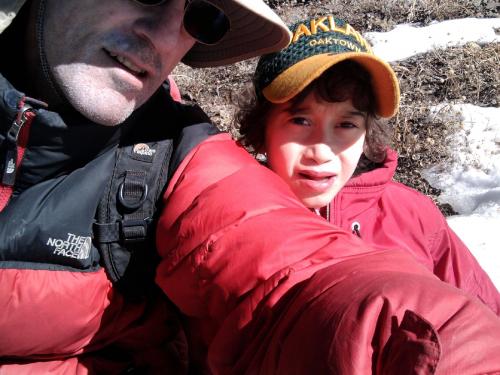 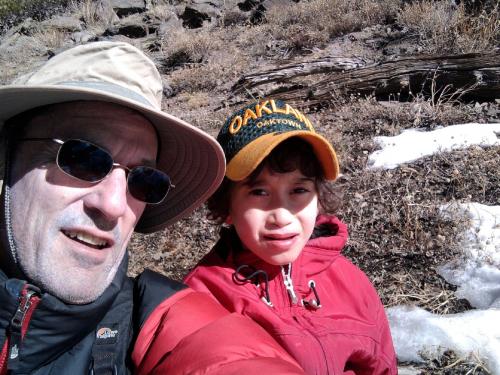 Is my nose really this big? 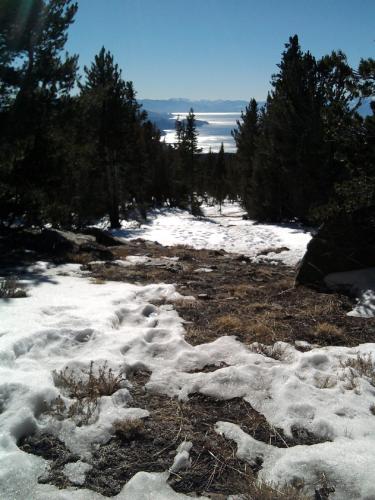 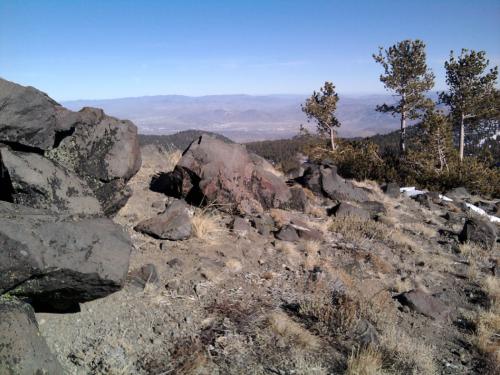 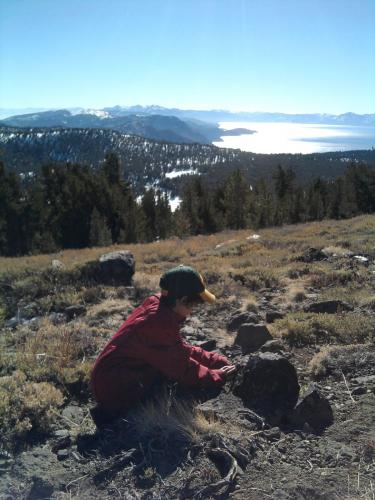 After a mile or so, the trail is mostly covered with snow and/or ice, and in places is just footsteps in the snow. It becomes a web of trails, and is a bit difficult to follow.

Once we get high enough to see the lay of the land, we realize that Mt. Rose is several miles away, with large ridges and valleys in the way. It's clear we're not going to make it there. However, there's a hilltop ahead of us that will make a good goal, and once we reach that there's another beyond that, which we climb to.

At this point the trail starts to descend, following a narrow snow-covered ridge. It's all snow and ice at this point. Plus it's moderately cold and windy (30 degrees, 15 MPH wind). So I turn us around. Noah objects violently to this, and we spend about 10 minutes arguing about it. I point out to him that, at our current pace, it would be dark by the time we summit Mt. Rose, which would make the return trip problematic. He grudgingly gives in.

We pass a few other hikers on the way down.

We get back to the car around 1:30 and drive down the hill to Incline Village. We go to the Raley's and buy food for dinner, plus some junky food (mac/cheese, fried chicken strips) for the ravenous Noah.

For dinner, i cook BBQ baked chicken, mashed red potatoes, and zucchini with garlic and bell pepper. While this is cooking, I turn control over to Chris (who's a good cook) and Noah and I return to the ski slope across the road. This time we struggle all the way to the top. Once again we descend in near-darkness; this time I've forgotten my headlamp. Noah complains a lot, and I get a bit grumpy and impatient.

Tara's family, famished after a long day of skiing, enjoy the dinner, and afterward the kids play several games of Sleeping Queens. Noah offers Gloria 50 cents if she'll lose, then raises this offer to 1 doller, then $1.50. She declines.

Sunday: we enjoy a lavish breakfast of sausages, eggs from Tara's chicken coop, leftover mashed potatoes, and various other leftovers, all wrapped in tortillas heated in sausage fat. Yum!

Noah and Gia have a dispute about the rules of Sleeping Queens.

Noah and I stop in Colfax and do the first 100 yards of the Stevens Creek trail; he's not in the mood. Then we stop at the Scandia Family Fun Centre in East Sacramento and play 36 holes of miniature golf. The usual heavy Sunday-afternoon traffic is missing, perhaps due to lack of snow and hence few skiers. We're in Berkeley shortly after 3:00.