Noah and I leave Berkeley around 10. There's a brief panic because my car won't start; turns out the positive battery cable is loose.

We head north on 101. Just past Santa Rosa, a motorcycle crash happens in front of us; the cycle rear-ended an SUV at high speed.

We stop for lunch at a to-go sushi place in Ukiah, which is a nice little town.

We had planned to go for a medium hike (Bull Creek trail) at Humboldt Redwoods state park. But the signage is so terrible that we can't find the trailhead. We settle for a short walk on a loop trail. 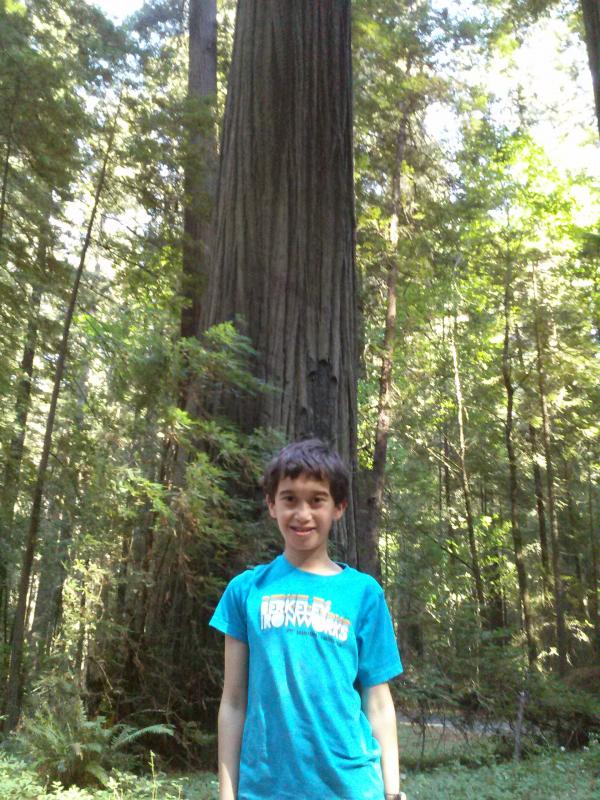 We drive through Eureka, which consists largely of strip malls and grizzled-looking homeless people. We stop at Wendy's and get Baconator (Noah) and Son of Baconator (me). They have no baked potatoes.

We continue 20 miles to Trinidad and locate my friend Kay's house, which is at the end of a long steep driveway. The house is close to the beach; it's foggy, and everything is a bit damp.

We walk down to the beach, climb up a big rock, and walk on a tree trunk. 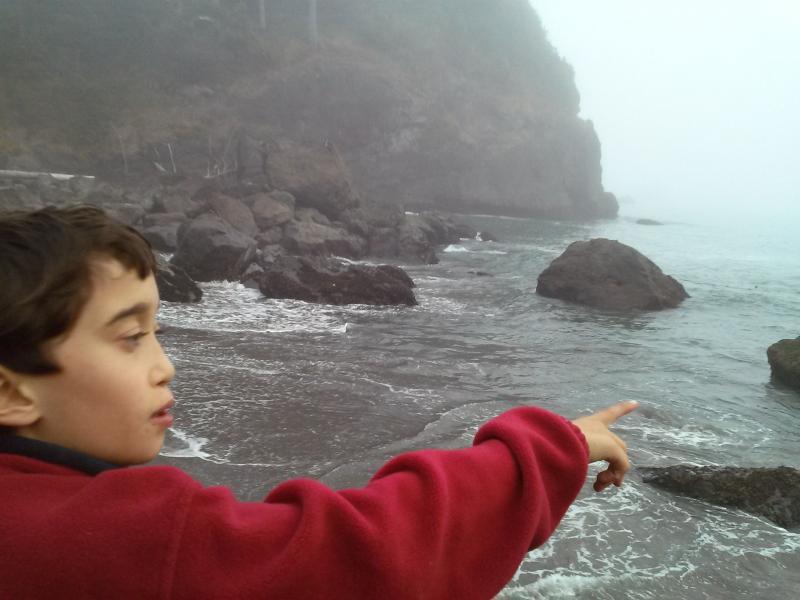 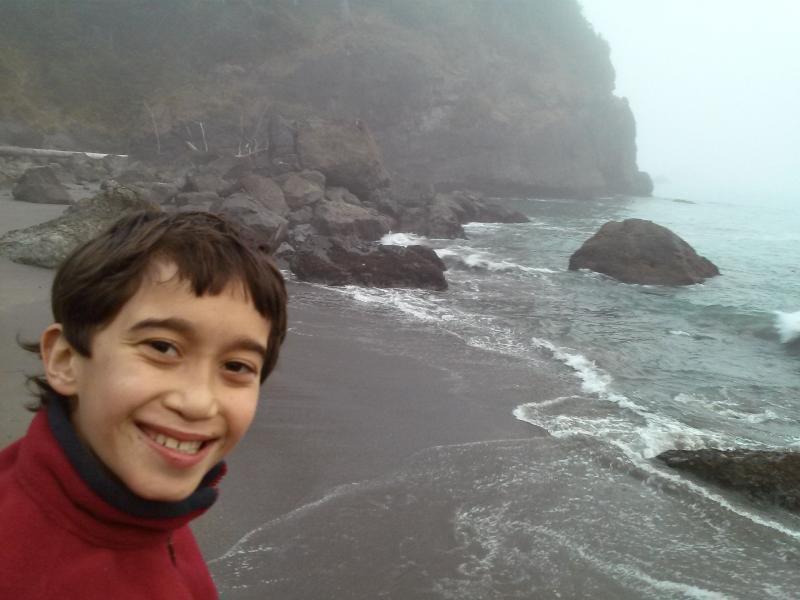 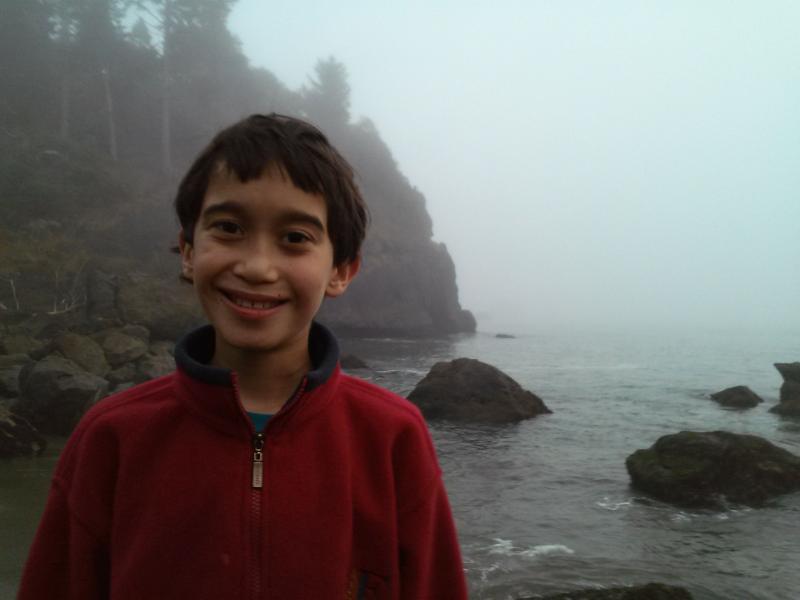 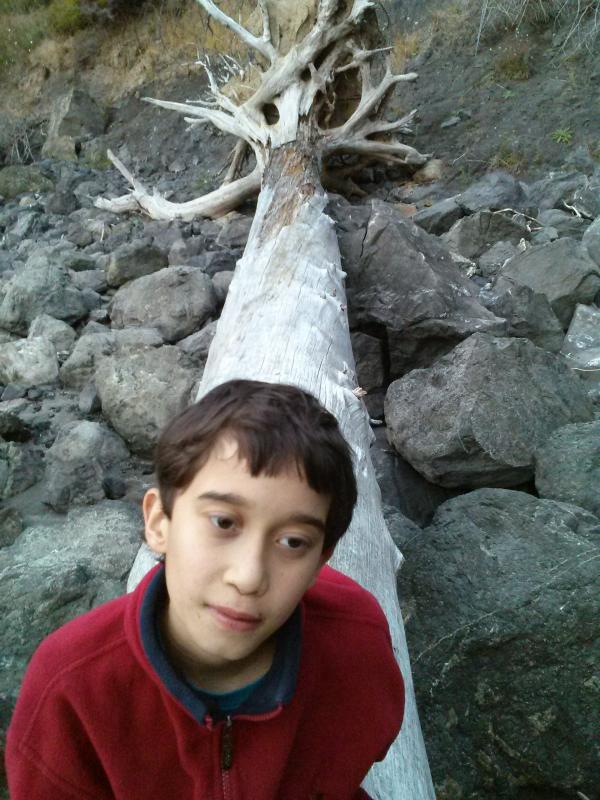 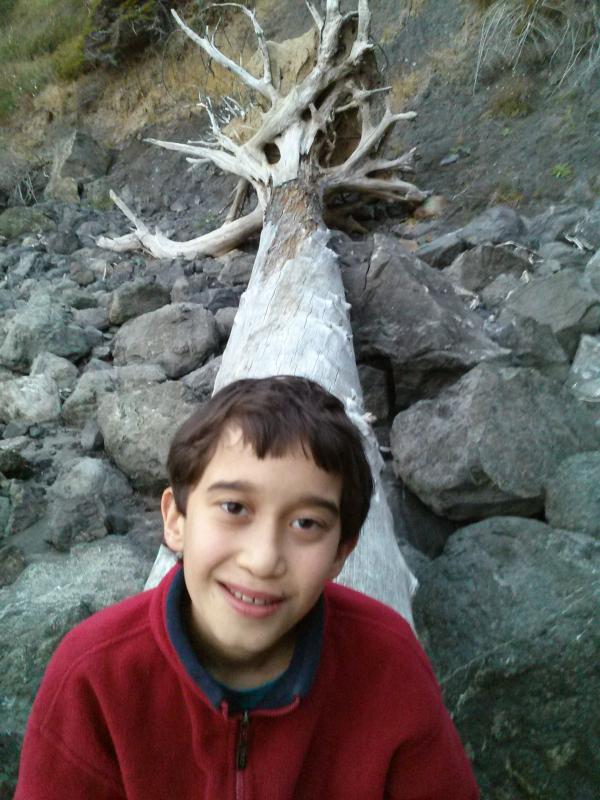 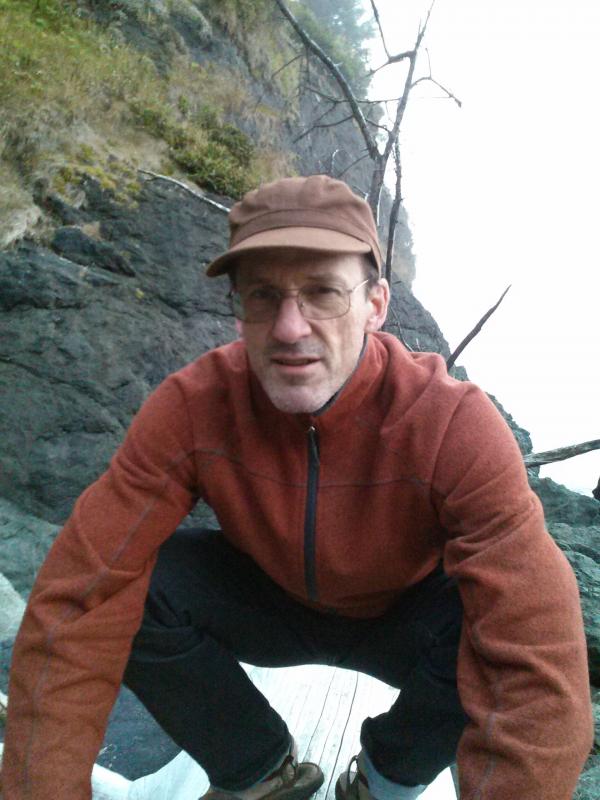 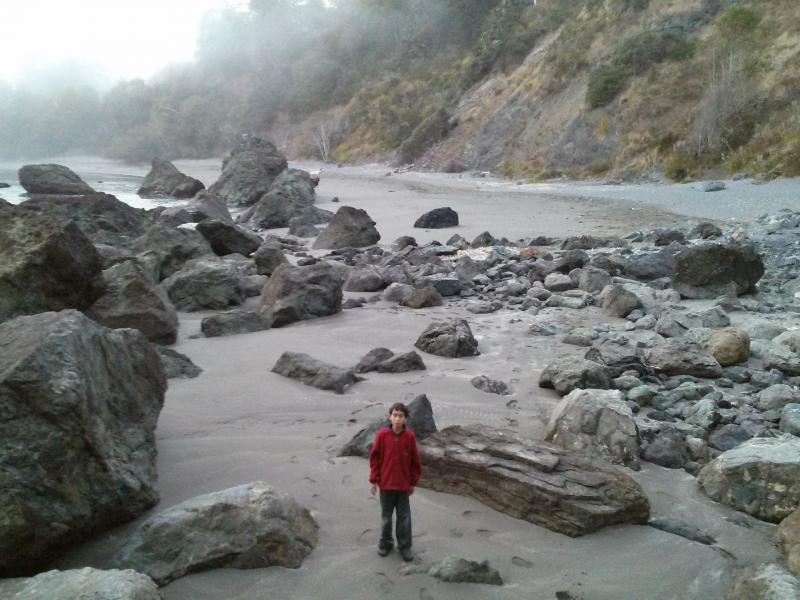 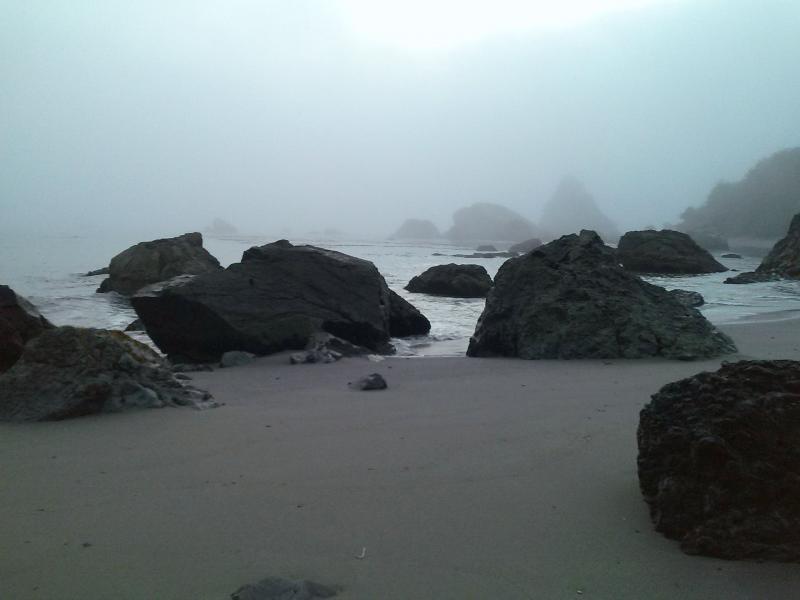 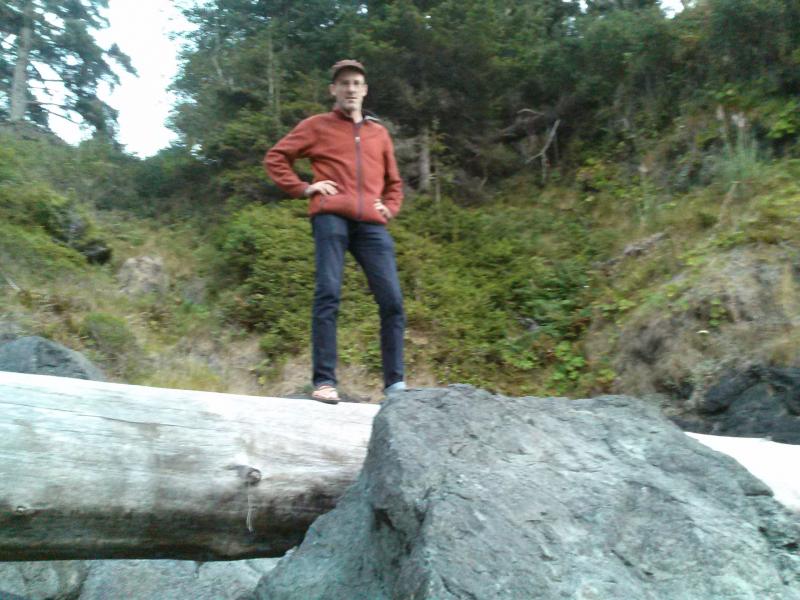 We go to the local grocery and get eggs, bread, milk, beer, and an excellent raspberry pie.

On returning to the house, the caretaker Natalie is there. We have a beer and discuss Tibetan Buddhism, Kathmandu, and alcoholism among Native Americans. I find a Calvin and Hobbes collection, which Noah devours.

I sleep extremely well for some reason.

We drive north to Redwood National and State Parks. A stop at the first visitor center, in which four rangers point at maps and spew park info to tourists. I get directions to the trailhead, which apparently is near a second visitor center.

Two navigational blunders ensue. First a premature exit costs about 10 minutes. I locate the Newton B. Drury Scenic Parkway, then pass a sign saying "Ranger Center", but I figure this isn't a Visitor Center, so I keep driving, about 15 miles. My anger increases. We finally hit 101 again. I drive back furiously. Turns out that near the Ranger Center there's a small sign saying "Visitor Center" in fine print.

We do the James Irvine / Miner's Ridge loop. 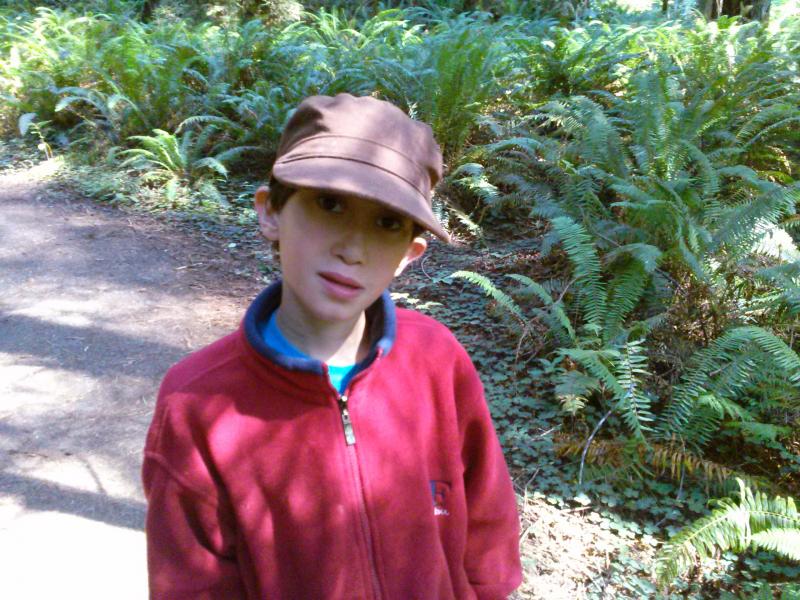 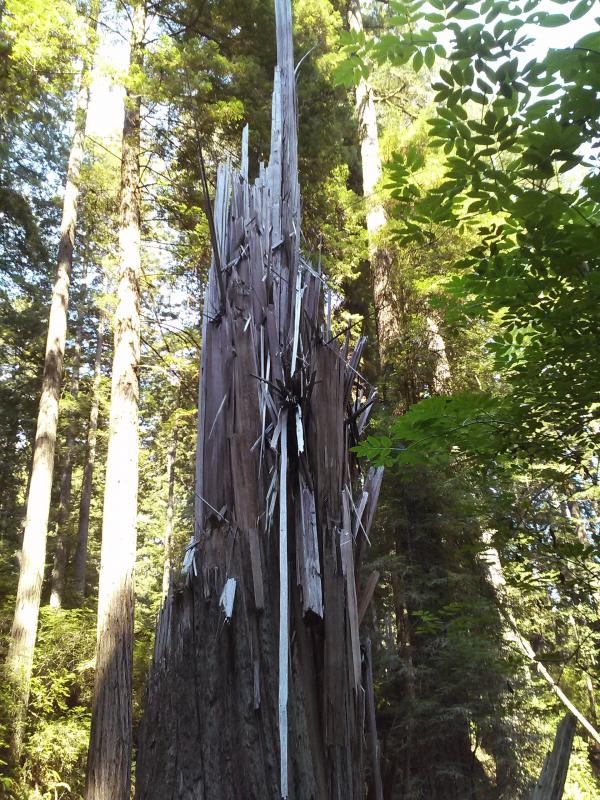 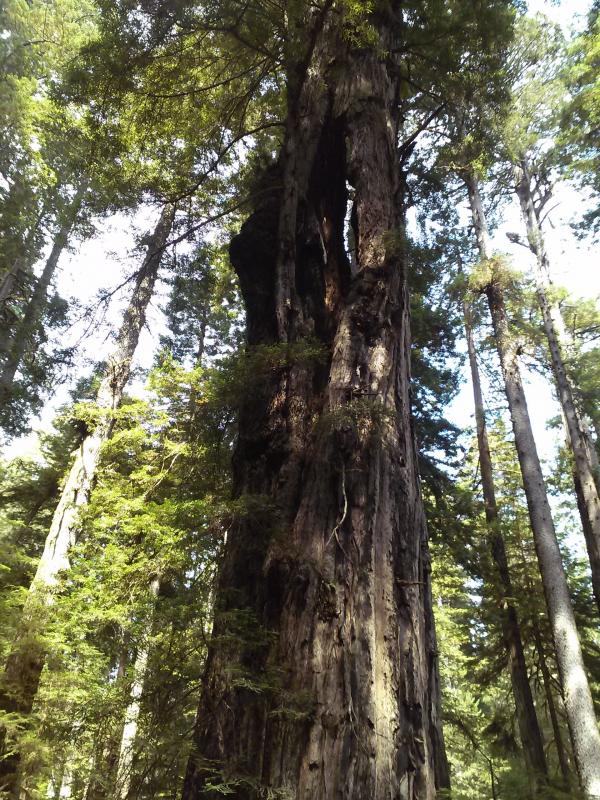 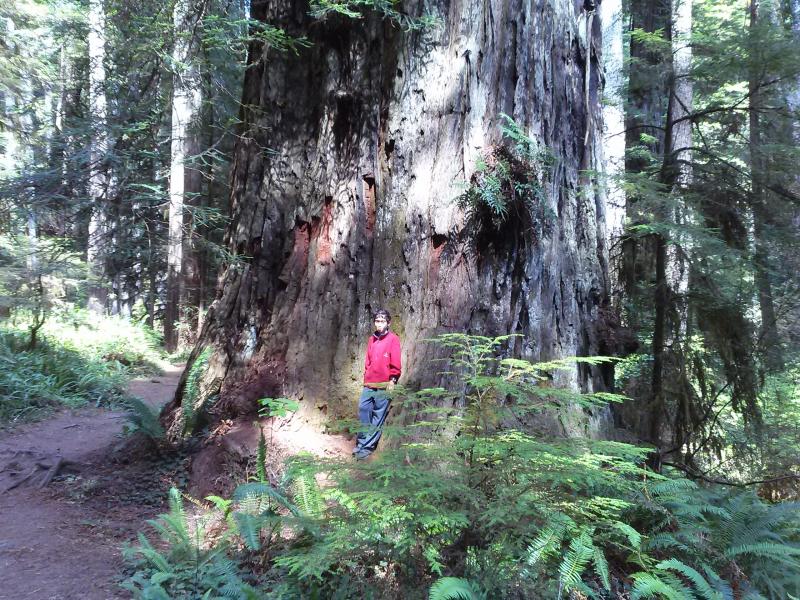 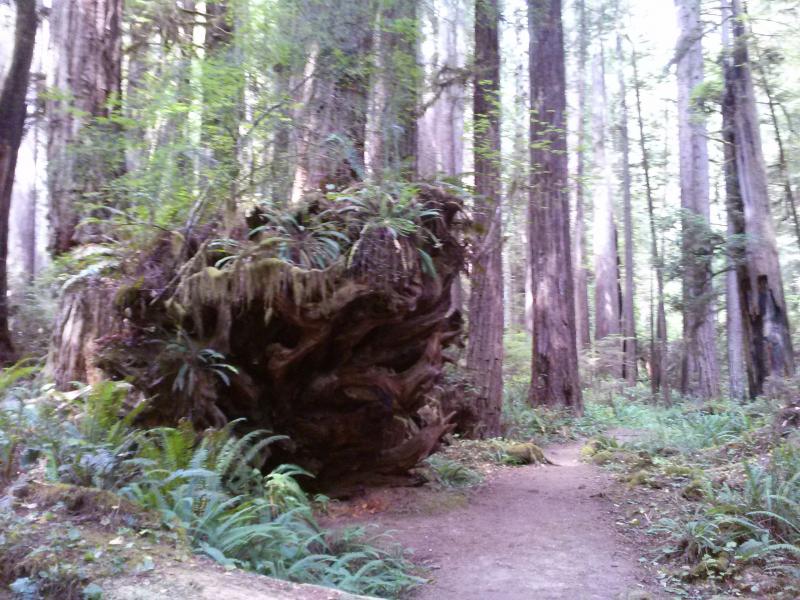 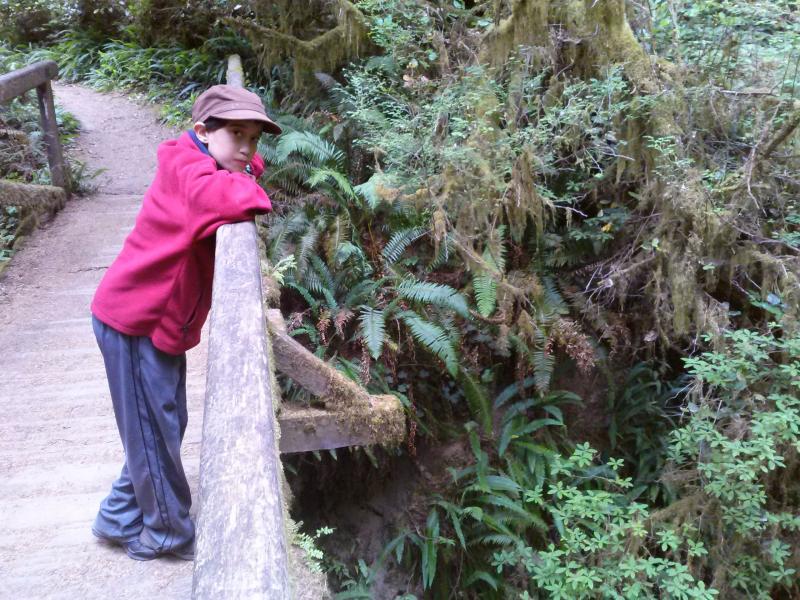 At the halfway point is Fern Canyon, a slot canyon whose walls are lined with ferns and moss. 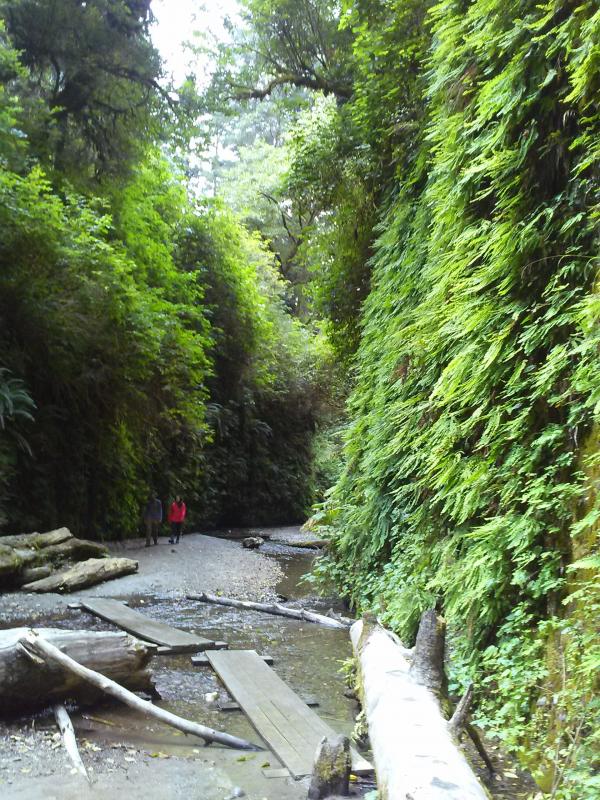 There are suddenly lots of tourists who are, shall we say, unathletic. Nearby is a big parking lot. I feel this place would be more special if you had to walk 5 miles to get here.

We walk south along the beach for a mile, then locate the return trail. 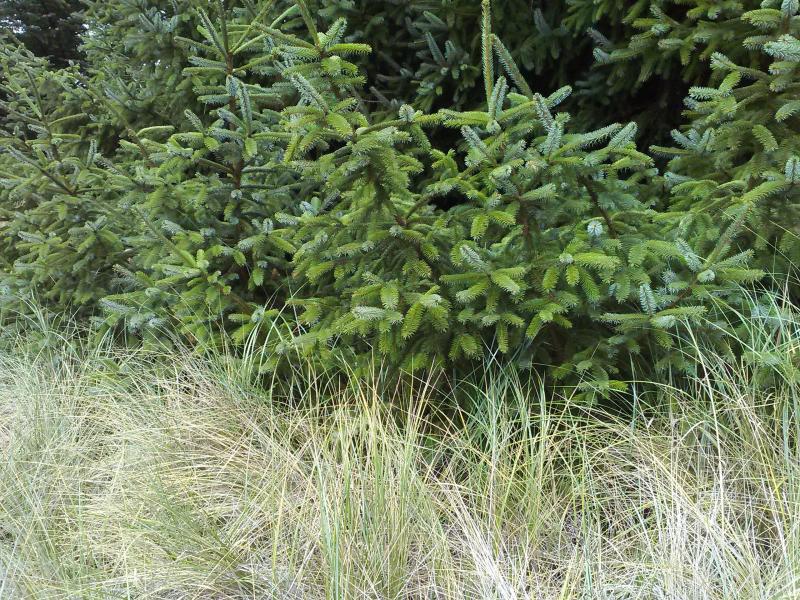 Back in Trinidad we stop at the grocery store and get a rotisserie chicken, which I serve with Mac and Cheese.

We pack up and head out, stopping at the Beachcomber cafe for coffee and pastries. They don't have to-go cups, but rather have a large set of used commuter mugs you can borrow or take.

We drive east on 299 through Shasta Trinity national forest. We stop at a rest area and I fill the water bottles. Unfortunately I leave them there, on a picnic table.

In Weaverville we turn north on 3. After 20 min we reach the turnoff for the Stoney (sic) Ridge Trailhead, which lies at the end of winding 6-mile dirt road.

I assemble my pack and realize the water bottles are gone. I survey the water-bearing resources available: 4 peaches, some cherry tomatoes, 3 beers, and the windshield washer fluid. We make do with resources at hand.

It's warm (c. 80) and bright. Noah is very low-energy, and slouches along the trail. The trail goes through patchy pine forests. It's quite beautiful and has great views. We go about 3 miles and gain maybe 1,500'. We cross a couple of cold mountain streams and Noah douses himself; he regains his mojo. We know there's a view of Shasta somewhere up there, but we turn around before reaching it. 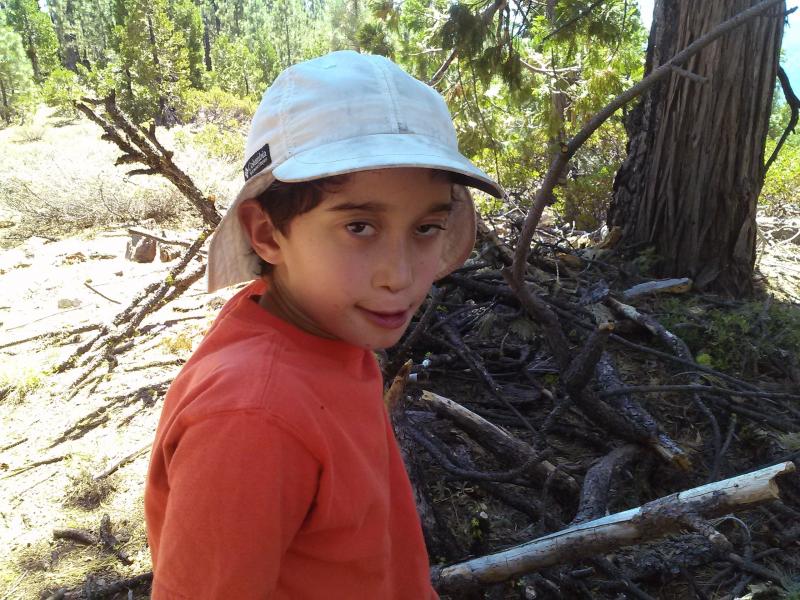 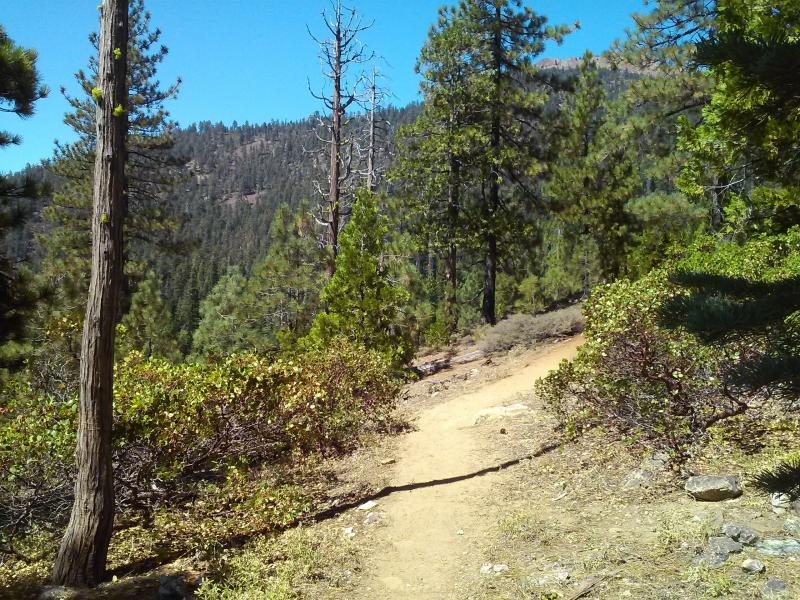 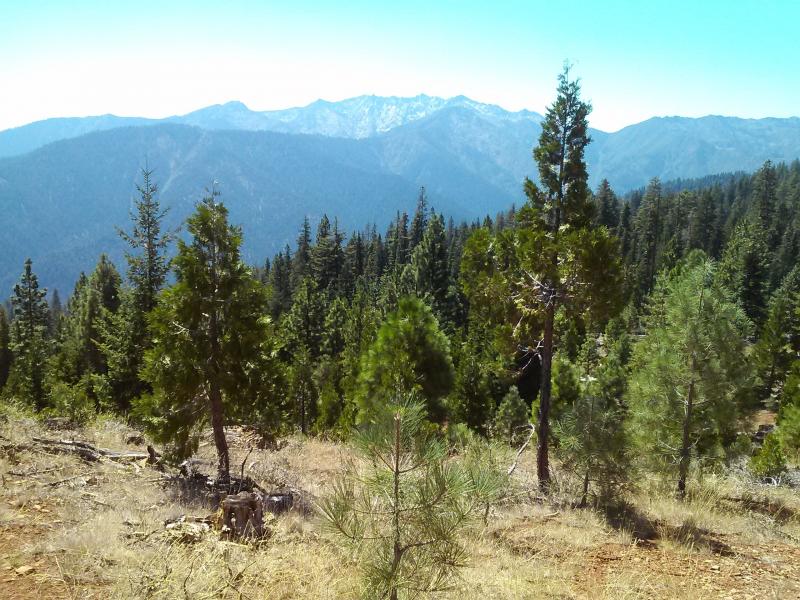 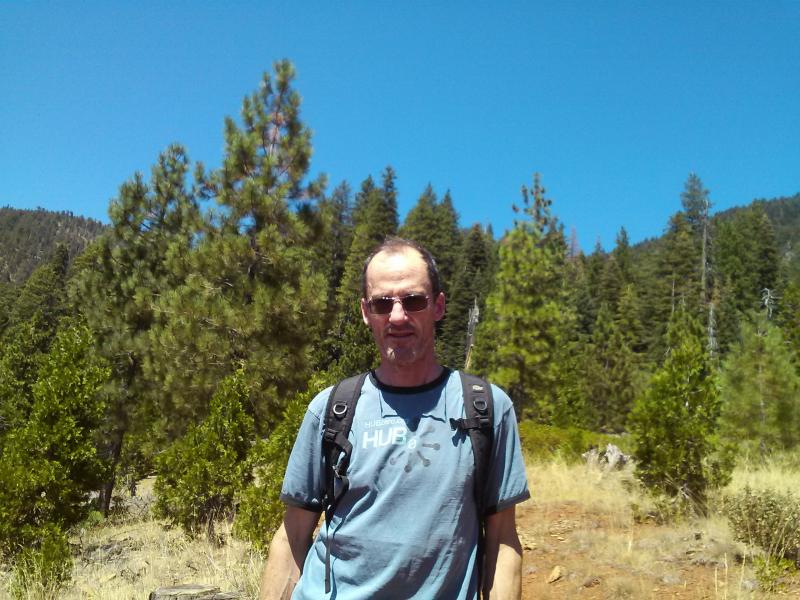 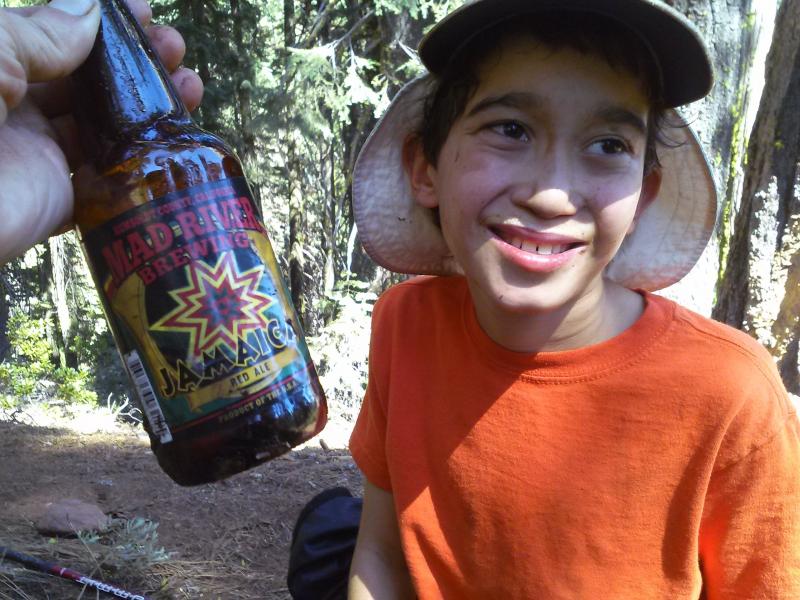 Noah watches me drink a beer 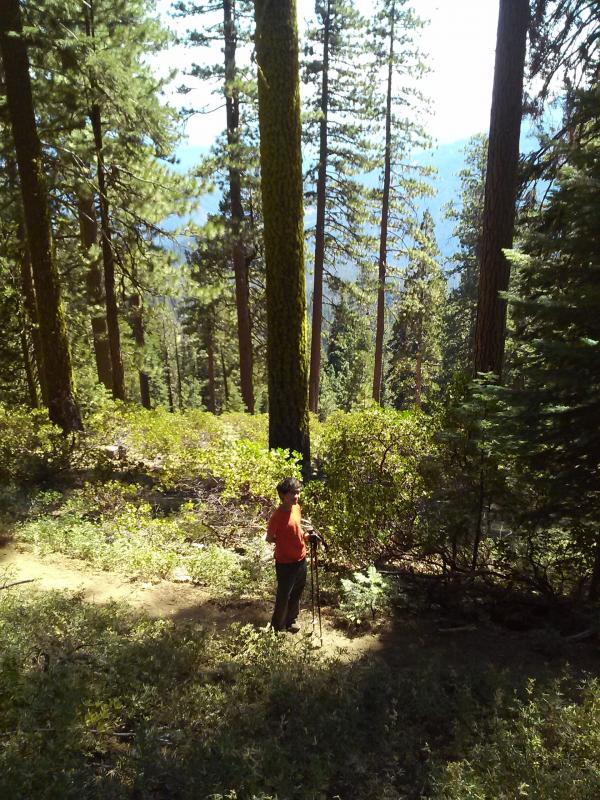 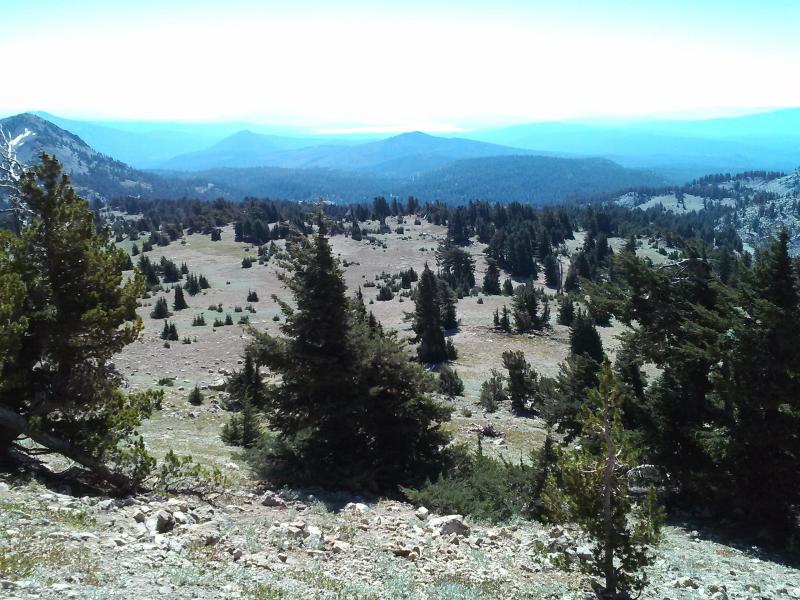 Coming down, we cross paths with a woman wearing a pretty dress and sun bonnet, carrying a full pack.

We drive back down and continue to Redding. We finally get a glimpse of Shasta, in the distance, huge and ghostly and streaked with glaciers.

Our motel - the Oxford Suites - is opulent and amenity-rich. Two free drinks and salad bar (which suffices for our dinner) at their "evening reception". Pool and hot tub. Semi-separated room with two TVs. Breakfast with eggs, bacon, sausage, good coffee.

We head west on 44, stopping to buy a large bottle of water and Band-Aids; Noah has a heel blister from his black shoes. We turn into Lassen National Park at the Manzanita Lake entrance. Admission is free - 100th anniversary. I've realized we don't have time for the Giant Cinder Cone, so we head straight for the summit trail.

The park seems almost deserted. No traffic, trailhead parking lot pretty much empty. There's a gaggle of 50 or so pre-teens, mostly girls. They depart while we're getting ready. Noah's blister still hurts; he switches to Crocs.

We start up the trail. After 15 minutes Noah asks for water. I reach in the pack - no water! It's back in the damn car!

I leave Noah and return to the car. The water bottle is hidden under some papers. I hurry back up the hill with the bottle. When Noah sees me, he says "What took you so long"? Vasectomy moment.

We continue up the hill. Noah's energy level is high, mine is average. He races ahead and has to wait for me a few times. Someone gives him a small bottle of water.

We reach the top. There's a flat part where the pre-teens are congregated, then a snow field and a steep trail to the summit. Noah gets snow in his Crocs, complains, gets scared of the cliff, complains some more, then doesn't want to sit close to the summit, and has a small tantrum. But eventually he calms down and we have a nice lunch. I chat with a young German woman and take her picture. 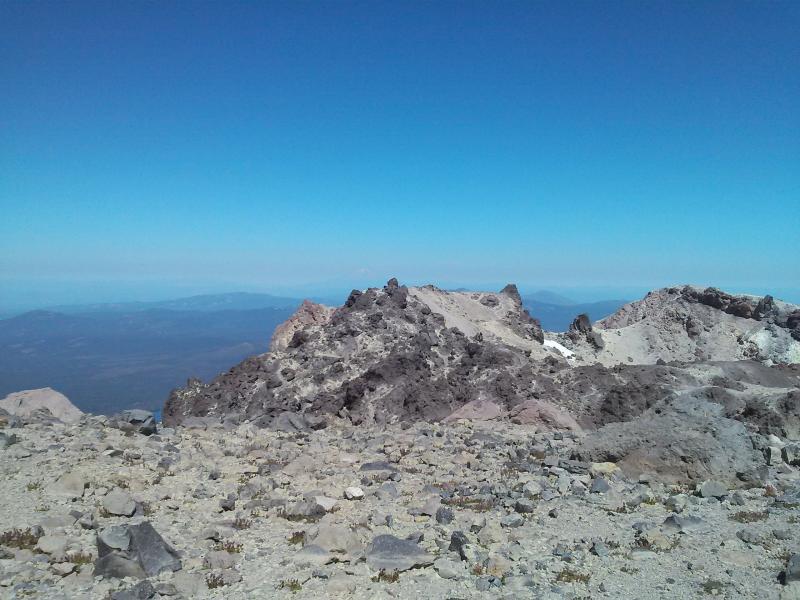 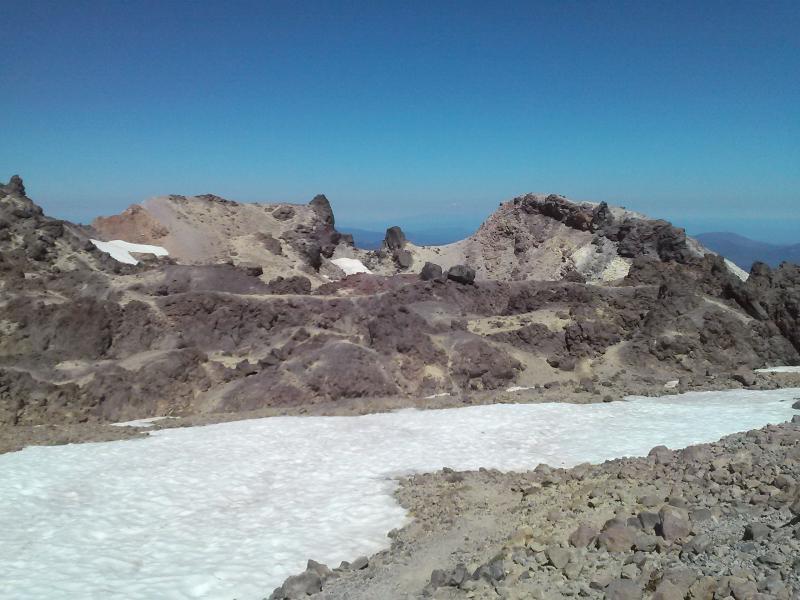 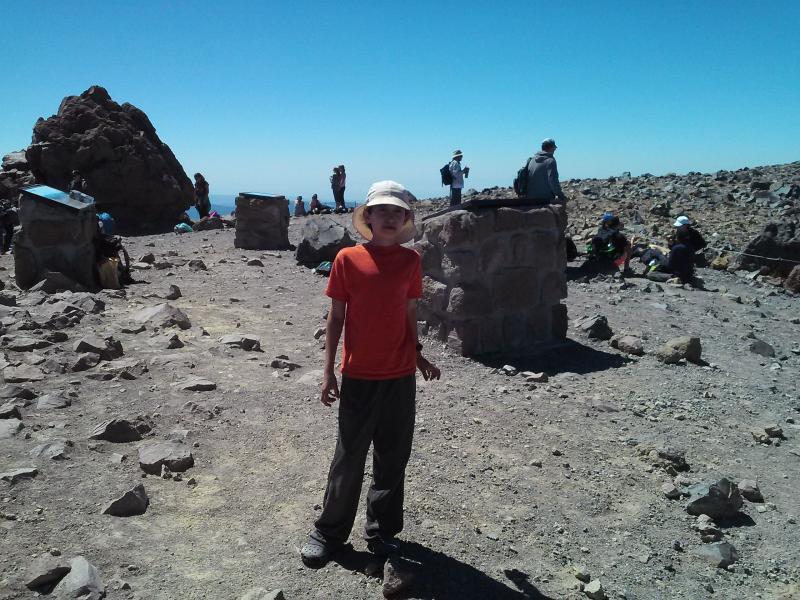 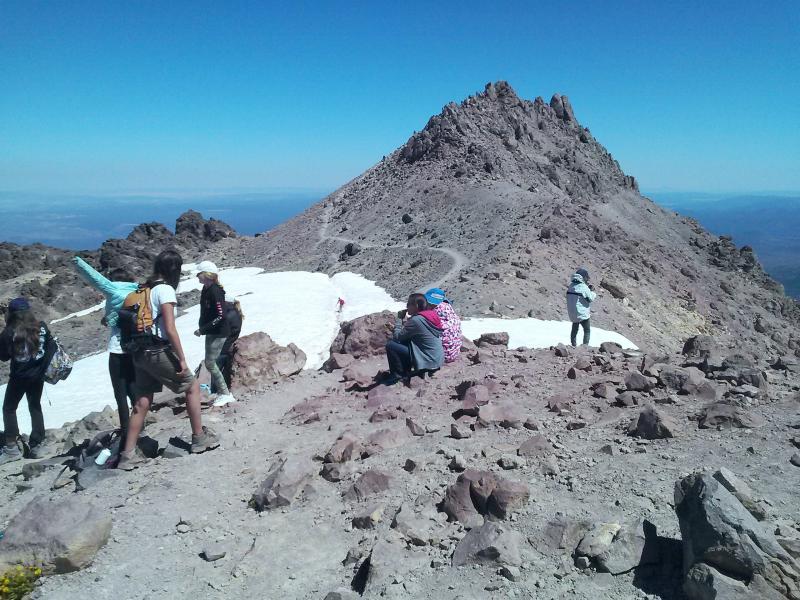 On the way down Noah has a headache, possible altitude sickness. I give him an ibuprofen in the car, which he chokes on and vomits (fortunately not getting much on the car).

We stop at Bumpass Hell but it's a 1.5 mile hike - too much at this point. Then we stop at the visitor center cafe and have fruit salad and a soft-serve cone.