I want to visit Palm Desert for two purposes: a) to see Rich Kraft, and b) to see some of the Indian Wells tennis tournament, with Rich and also with my friends Karen and Terry, who make the pilgrimage from Denver most years. I decided to drive down rather than fly, in part so that I can take my bike.

I head out around 11 in Erica's car, which has the fancy cruise-control feature. Gas prices have spiked because of Ukraine. The car's nav system has a feature where it shows you nearby gas stations, sorted by price. You can then navigate to one of these, but it forgets your original destination. I listen to some music from my phone, through the car speakers. Radio stations in the valley are mostly Christian stuff.

I take a couple of short breaks, but the (~8 hour) drive seems really long, and my body is aching. The seat in the Subaru is not ideal for me - most of the weight is on my butt, rather than the entire back of my legs.

I arrive to a warm welcome at Rich and James' place, which is very nice and well-situated. Rich is recently furnished with guest bedroom with an inflate-a-bed and memory foam topper, to my specs. In spite of this I don't sleep the first night. After that Rich gives me OTC sleeping pills he uses, and I sleep better.

Rich and I go to Indian Wells for the opening day, which consists of qualifying matches and is free. Everything is app-based:

Rich is profoundly irritated by this. There's a lot of app-related humor. I make the joke that Rich is cash-rich but app-poor.

We see various matches - I can't remember them all. Sara Errani in stadium 2, Ashlyn Krueger on court 8.

The most memorable for me is Daniel Galan (Colombian) vs. Popko (Kaz). They're both baseline players and hard hitters. Popko has a big serve (130+ MPH); Galan seems to have a shoulder injury; he can only serve very softly, and can't hit overheads. But he perseveres. Incredible battle of will. Every game goes to multiple deuces. Somehow Galan wins the match. 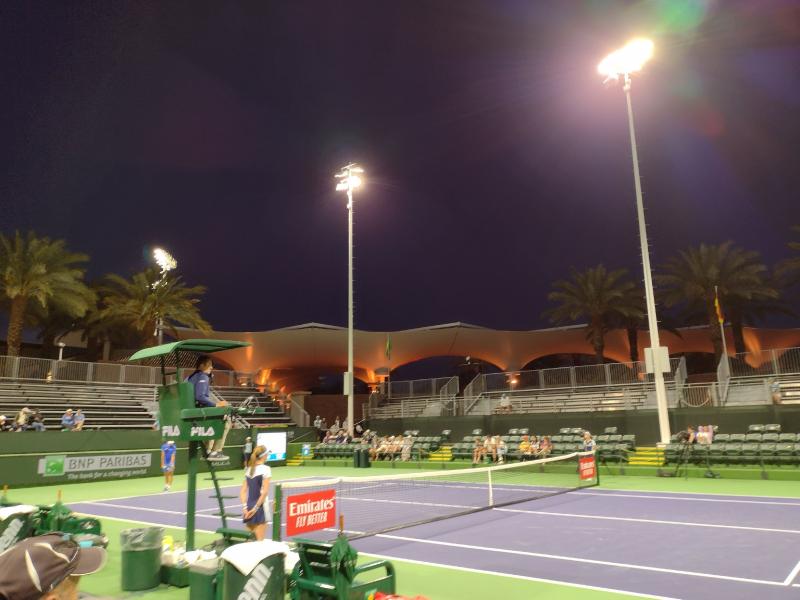 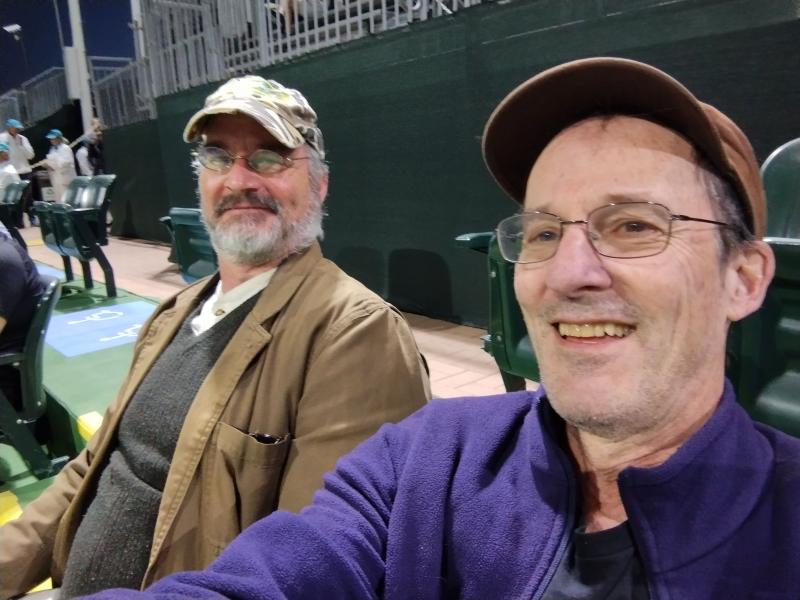 More tennis. A Japanese guy who is constantly swearing to himself somehow beats a much larger French guy, who seems to suffer a groin injury right at the end. 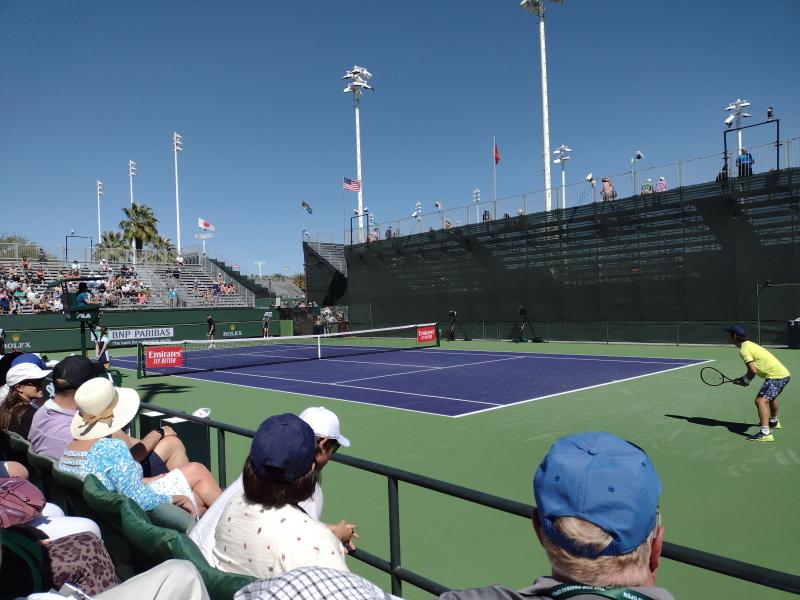 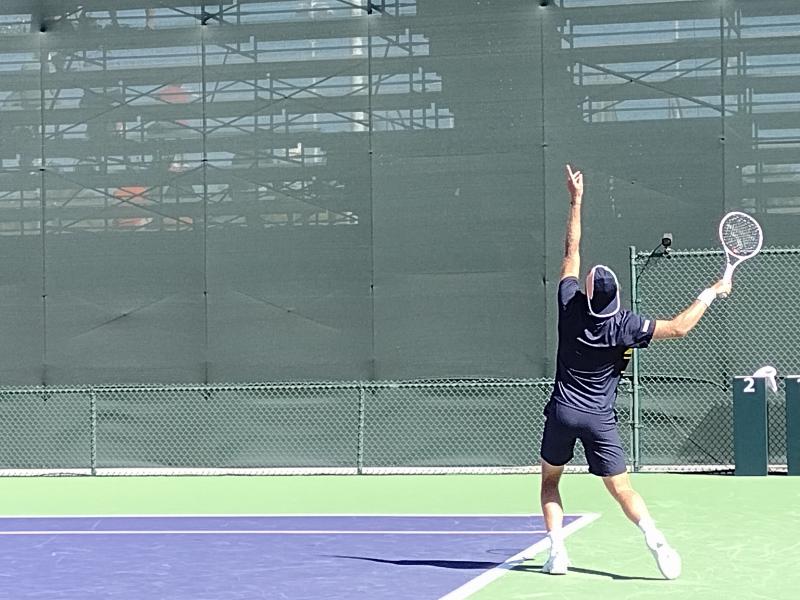 Vasek Paspisil (Canadian) beats a Russian guy in a stadium packed with Canadians. We chat with a couple of women from Winnipeg. Turning around, Rich sees Rafael Nadal on a practice court, but it turns out to be Fabio Fognini dressed up as Rafa. 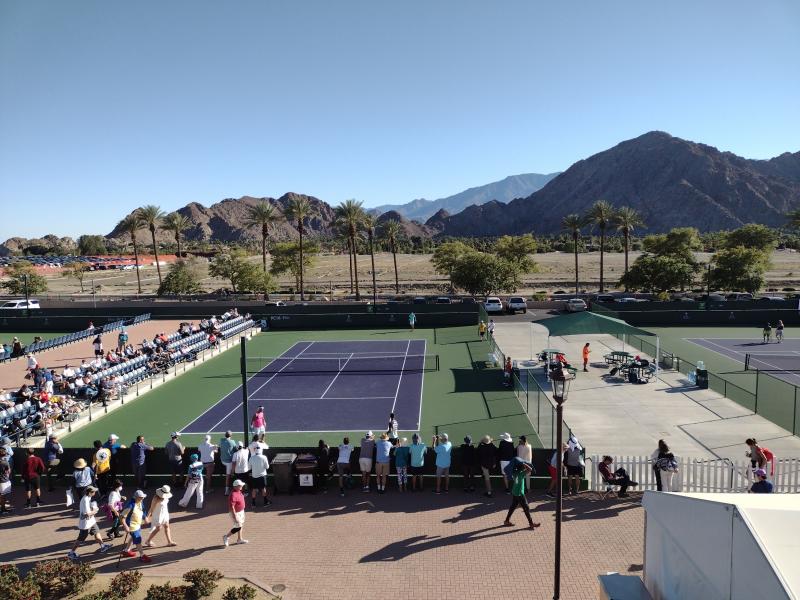 We take a break from tennis. Rich, James and I go for a swim in the community pool, and then go for a bike ride. The entire area is covered with housing developments, some gated, all of them surrounded by walls. There's golf-course-quality grass everywhere; apparently an aquifer supplies water for the whole area. Rich and James love the place, and I can see why, but it's not my thing.

The girls (Karen and Terry) arrive from Denver and come over for dinner. We go to El Paseo (a chic area of luxury stores) and try to go to Jack's woodfire pizza, but their computer is down and it looks like a disaster, so we go to a smaller place, which is OK but slow.

I play piano for the girls, and Rich show the choral piece he's working on and plays the computer rendition.

The girls leave. Rich brings me up to date on dark matter research, and on the work of Iranian mathematician Maryam Mirzakhani (Erica is featured in a recent movie about her).

Back to Indian Wells. 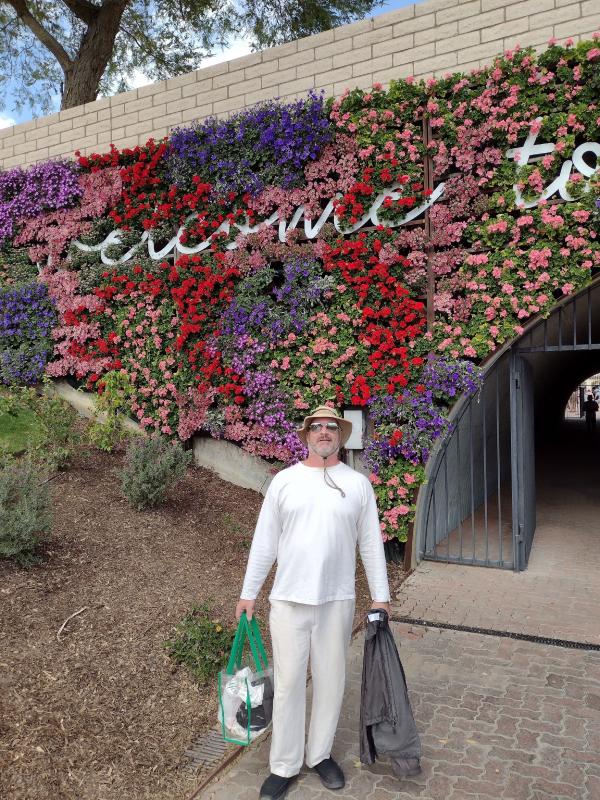 The girls have tickets for stadium 1, which a grounds pass doesn't get you into. Rich and I watch Fognini vs. Pablo Andujar. Fognini plays as if he's not trying very hard and doesn't give a damn. But he has a gear that Andujar doesn't, and he wins.

We break for lunch. Rich tries to buy a sandwich; the lady says they're sold out. I point out a display case full of sandwiches. D'oh!

We manage to hook up with Karen. We watch a bit of Jack Sock in stadium 2 (blow-out), and then watch an entertaining match between Chris Eubanks and Maxime Cressey. They're both very tall, rangy, powerful players. Cressey is a serve-and-volley guy. Eubanks has trouble with this; his passing shots aren't working. But he starts to figure it out, and after facing a couple of match point against him, he wins the 2nd-set tie-breaker, then wins the 3rd set. I become a bit Eubanks fan. 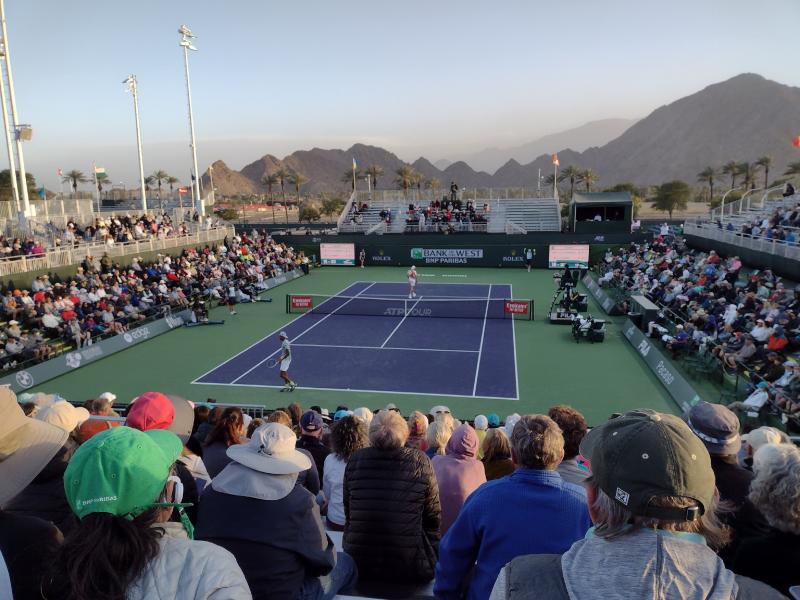 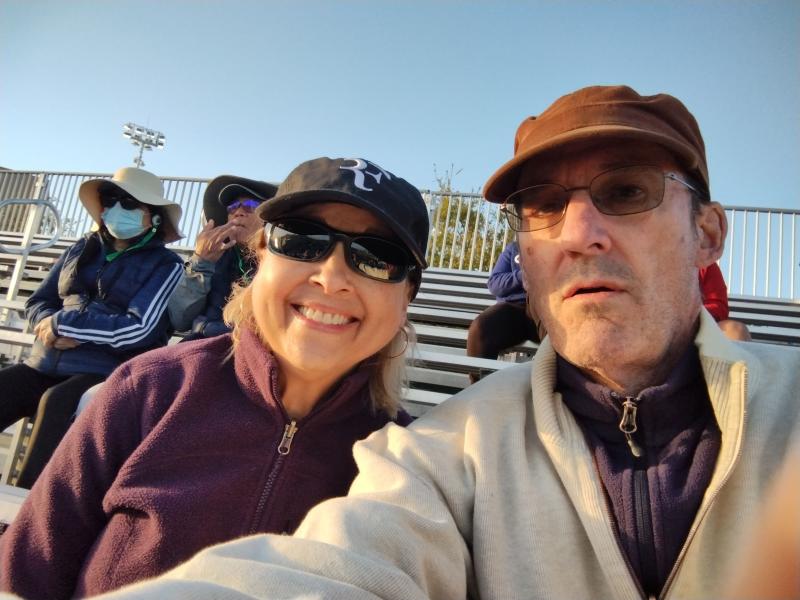 Cressey has a hilarious serve where he mis-hits it off the top of the racket; it goes high in the air, comes down just on the other side of the net with tremendous side-spin. Both players are amused by this. 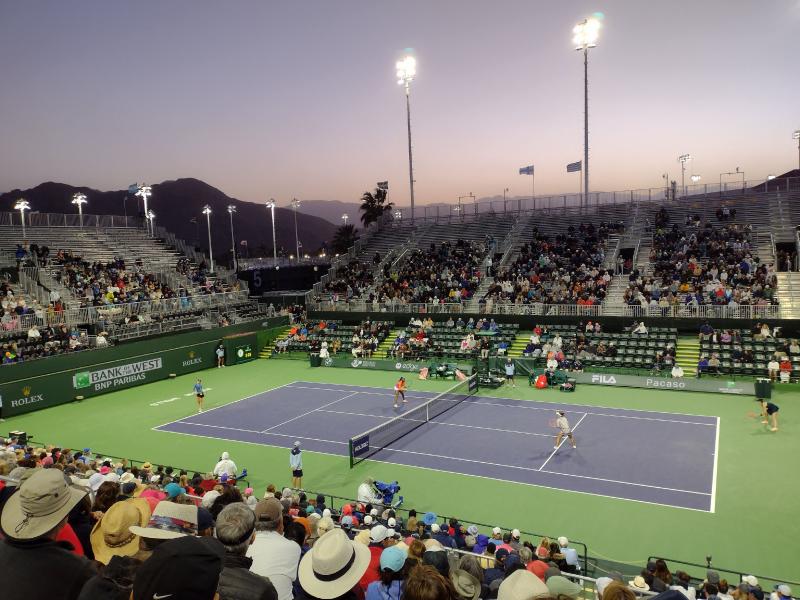 Rich and I get some shrimp for dinner at the Albertson's. After dinner I drive to the Homestead trailhead and do a night hike in the hills. There's a half moon and I don't need the headlamp. The mountains are huge and ghostly in the moonlight. I hike toward a large illuminated cross halfway up the mountain, but don't quite reach it.

Rich and I have a work session; I show him Numula, he shows me his math-inspired formulation of nuance. I show him Music Match. We go on another bike ride, this time to a horse-oriented neighborhood with $30M 'properties' (I hate that word).

The girls come over for dinner - tri-tip and pasta. They bring a bottle of wine and a 'cookies and cream' cake.

After dinner Karen and I repeat the night hike. This time, sitting at the turnaround point, we encounter a bunch of other hikers: first a guy by himself, then a group of c. a dozen kids of various ages, and a grown-up in the rear.

I say goodbye to Rich and James, join Karen for breakfast at the Embassy Suites, and drop her off at the venue. On the drive home I visit my friend Eleanor in Claremont and we go for a short hike in the hills (lush and green). It's her first day with a hearing aid.

The drive home is long but reasonably pleasant. I figure out how to shift my weight periodically to avoid butt numbness. I set the cruise control on 80. I'm confused by the late arrival time until I realize that daylight savings ends at midnight.