This year's BOINC workshop is in Paris.

My seat is in the rear of the 777. A chubby, ditzy Irish girl is in my seat. She wants me to switch places with her friend in the very last row; I decline. I struggle to stow my carry-on; the inboard luggage bins are, oddly, not really designed for carry-ons.

The 10-hour flight goes by fairly quickly. In the middle of the night they come around with ice cream bars. I take one but but it turns out to be synthetic and yucky. They don't come back for trash, so I stash it in the barf bag.

They pass out the fancy dinner menu cards, but don't get your hopes up. It's Air France, but that doesn't mean the food is any good. The cold, stale piece of bread testifies to that. 'Fruit compote' is actually Mott's applesauce.

The plan has power outlets, and they light up, but apparently no power comes out of them. I run my laptop battery down to about 30 min.

Passport control is not bad - maybe 15 min., and I'm not detained for a change. There's a long walk to the RER station. Suddenly it's hot and crowded. No signs - where do I get a ticket? Turns out, either at the office, which has a line of about 100 people, not moving, or at one of 4 vending machines, with lines of about 20, also not moving. I opt for the latter. Several people in front of me are baffled by the machine, and stare at it slack-jawed for minutes on end, trying the same thing over and over. I can't believe that everyone is accepting this. This is France - shouldn't we storm the damn turnstiles?

I get my ticket - the machine is not that complicated. The train into Paris (RER B) is clunky, but I'm enthralled and sentimental on seeing European again. It's so much better than the U.S., in many dimensions. I get off at Denfert/Rochereau and locate the M4 subway.

I arrive at the Place Alesia, orient myself, and locate the building of my Airbnb. Unfortunately it's a locked door with no names or numbers. Colette (the host) is not in evidence. I have Colette's phone#, but my phone has no SIM card. I wait around, baffled. This is what I was NOT hoping for - a breakdown of the flow, with no clear course of action.

Well, actually there is a course of action: email Colette. I locate a nearby MacDonalds; they have wifi. I go in and hastily type an email to Colette. Just as I hit 'send' my computer turns off - dead battery!

I manage to locate a power outlet, reboot, and send the email. Colette quickly replies, and she meets me outside the building. Turns out she forgot to send me the security code to get in.

The apartment is great, and I say au revoir to Colette. Then I turn on my computer and it's not clear there's any WiFi. I try a few free-looking networks but none work. I notices there's a commercial provider (Orange) but I'd need to pay E20.

So it's back to MacDonald's to email Colette. This time I attempt to buy a hamburger at the touchscreen terminals they have, but my credit cards are all declined. To hell with it. Colette replies with a network name, login, and password. But she ominously says the WiFi 'works better in the morning'.

Back home: sure enough, the WiFi is unusable. I go with the Orange option.

Through all this running around, of course I haven't slept for c. 24 hours, but I try very hard to stay relaxed and unstressed, and to avoid making any bad decisions.

There's a supermarket (Carrefour) right downstairs, and I stock up on some basics (with cash obtained from an ATM on the corner). With some food in my stomach and the Internet issue resolved, I'm a calmer and happier place.

Great night's sleep; I had absolutely no jet lag on this trip. I hang out. Matt B emails me around 2 PM, and I meet him on Rue Deguerre (off of Leclerc) where his Airbnb is. The airline lost his suitcase in Reykjavik. He has a similar situation with locked door and security code, but fortunately there's another MacDonald's nearby.

Matt's place is tiny. I'm taken with the hostess, who has wild tawny hair and serene blue eyes.

Matt has a crepe w/ eggplant at mideastern place across the street, and I get coffee.

We walk to the Paris Observatory, which is a couple blocks away. The main reception hasn't heard of Marius, but we wander around, locate the IAP (Astrophysics Institute), find an open side-door, ask some scientists for help, and locate Marius. We check out the venue.

Matt and I walk toward what he thinks is a river, but which turns out to be a highway. He puts forth his credo: if you're thinking of turning around, keep going for 3 more minutes. This works, in the sense that we run into Marius again, who's on his way home. He takes us to his fave bakery where we buy hot-out-of-the-oven baguettes.

Matt and I continue, and walk through Montsouris park, a large beautiful park with lots of joggers on the perimeter path. We talk about elementary schools. Matt tells me about a teacher who disliked him because he used cursive prematurely; he hasn't used it since.

We eat at a sidewalk place, and I have a blah salad. The beer offerings are pallid (hence the title of this report). Where's all this damn great Parisian food? Anyway, he tells me about a device he used at Yale: every semester, write a final paper that satisfies 2 classes at once; e.g., game theory and anthropology, thus (as Rich says) taking the tensor product of the two classes. I think this is beyond brilliant.

The workshop starts. I give an intro talk. We get lunch at a fancy place w/ Bruce, others. I give my second talk. Bruce leaves.

The 'conference dinner' is at semi-fancy place, long walk. I walk back w/ Steve Clark and Ian Eaves (?).

More workshop. For lunch we get sandwiches at a place on Deguerre.

Afterward, I put on running gear, run along Alesia and Coty to the Parc Montsouris, where I meet Matt. We run a couple of times around the park, then walk across the street to Cite Internationale, a fantastic complex of national-themed dormitories build around a huge park. A cello/piano concert is going on in the Japanese building. We walk back and talk about music.

We have dinner at a Vietnamese place, pleasant but so-so. We talk about movies and VRTV.

Hackfest. We have lunch at the same sandwich place.

I eat dinner at home: fresh linguini with sausages. I'm flummoxed by a memory corruption bug in Nebula (remove_rfi) and try many work-arounds.

I tour the catacombs with Kevin and Keith. The main attraction is the 'Kingdom of Death'. 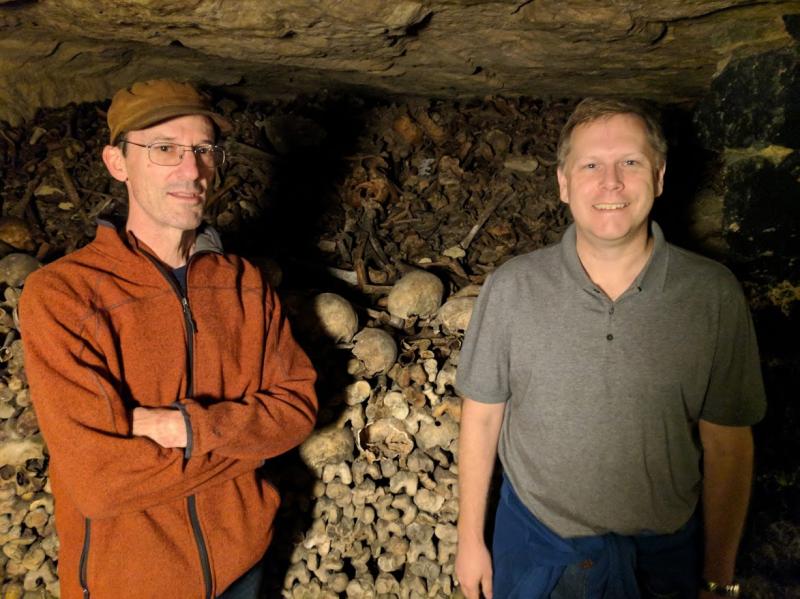 From there, we walk on Coty to Parc Montsouris, get Nutella crepes, and sit by the lake. 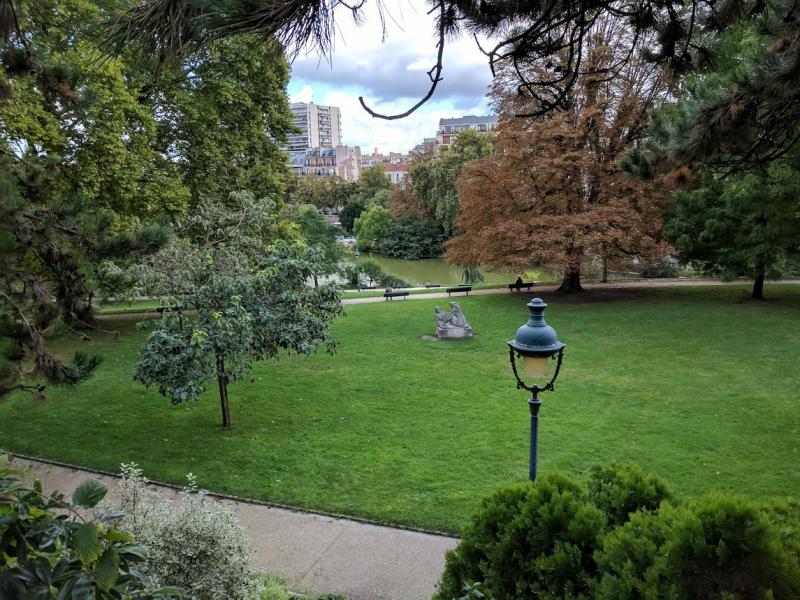 It starts to rain. We walk back to Denfert-Rochert and get coffee at a sidewalk cafe. We talk about BOINC, motorcycles, and sports. I forgot that Keith is an athlete; I'd like to shoot hoops w/ him someday.

I go home and eat leftover pasta w/ melted brie. I could keep working on Nebula, but figure I should get out. I scan the concert listings, which are extremely sparse, but there's a free organ concert at Notre Dame so I go to that. It's very good, though the 15-second decay of the space makes for murky sound. Some tourists are talking during the music. I shush them with some prolonged glares.

I return home and find a work-around for the Nebula bug (sticking in a chunk of unused memory).

I sleep kind of late, and scramble to get cleaned up and packed before Colette arrives at 10:45. It's good to see Colette. We share a hug and some cheek-kissing.

The trip back is pretty Astroglide. Near my departure gate there's a white Yamaha grand piano, with a plaque saying it's donated by the Chopin Society. I sit down and play the 1st prelude very quietly.

On the plane, the drinks include champagne, so I get a Mimosa - yum. In this direction the airplane food is much better and more French. The couple next to me are a couple, both particle physicists, who talk animatedly, draw circuit diagrams, and make scatter-plots on their Macs.

The trip is marred by a 1-hour line at SFO passport control, while the video monitors show wild horses and cowboys, saying how great America is. What a poorly thought out bunch of crap.