Rob V. and I, tired of our humdrum routine of flashing 5.11C's indoors, are looking for some late-winter exercise. I suggest Pyramid Peak, which Dave Gedye and I climbed in 2002. It's only 7.5 miles round-trip, but 4,100 vertical feet.

Disaster! The day before we leave, a storm dumps a foot of snow on the Tahoe area. This concerns me (in part because of potential avalanche danger) but we decide to go anyway. Due to Rob watching college basketball on TV, we get a late start on Friday and stay in Placerville.

A quick breakfast at the Waffle Shoppe, and we're on the trail at 9 AM. Because of the new snow, the trail to Horsetail falls is impossible to follow, so we bushwhack in rocks and snow on the left of the valley. It's slow going. I try to follow the previous route, but it's hard because there's so much snow. I don't really recognize anything. We turn left, up the side of the valley, at what looks like the right point. We stay on the rock as long as possible. 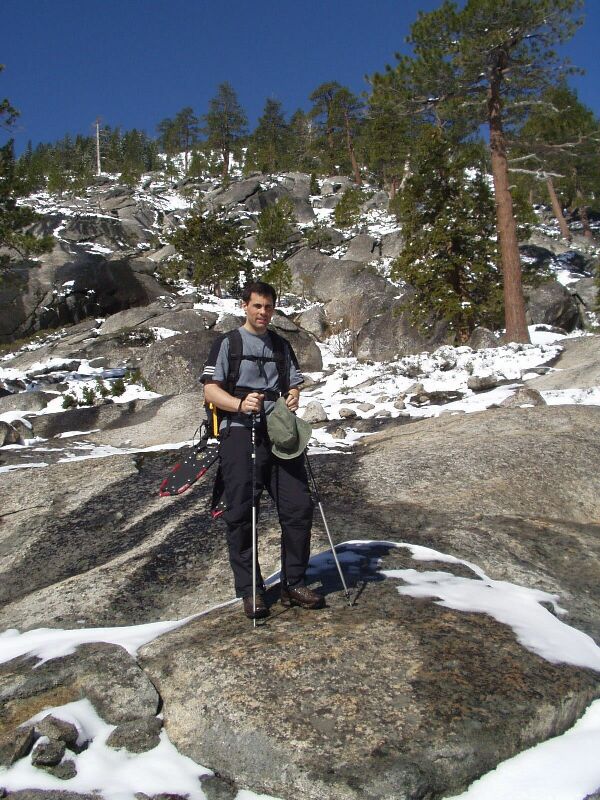 The rock gives out and we switch to snowshoes. The new snow is wet and slippery, and sits on a hard base of old snow. Even with strong kicking-in, we slip a lot, producing lots of back-sliding. It's exhausting. 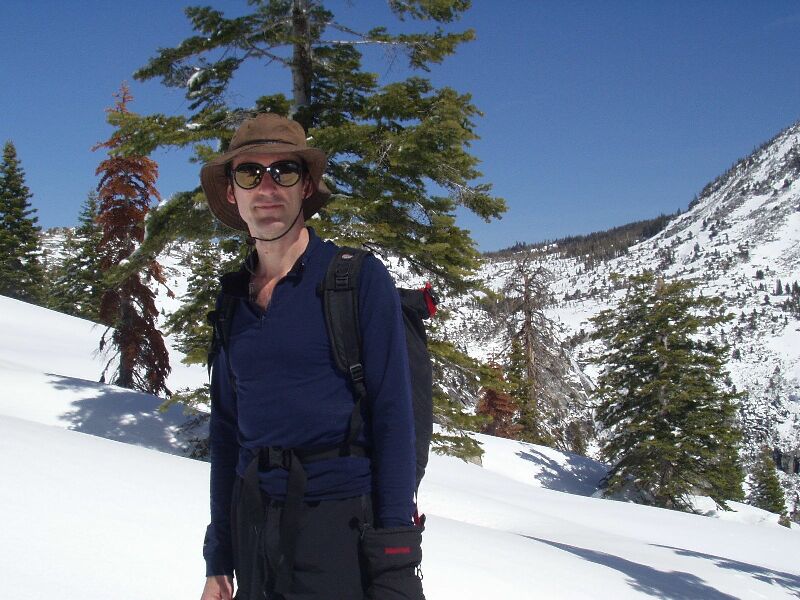 We gain what looks like the ridge, but soon there's another demoralizing steep stretch. 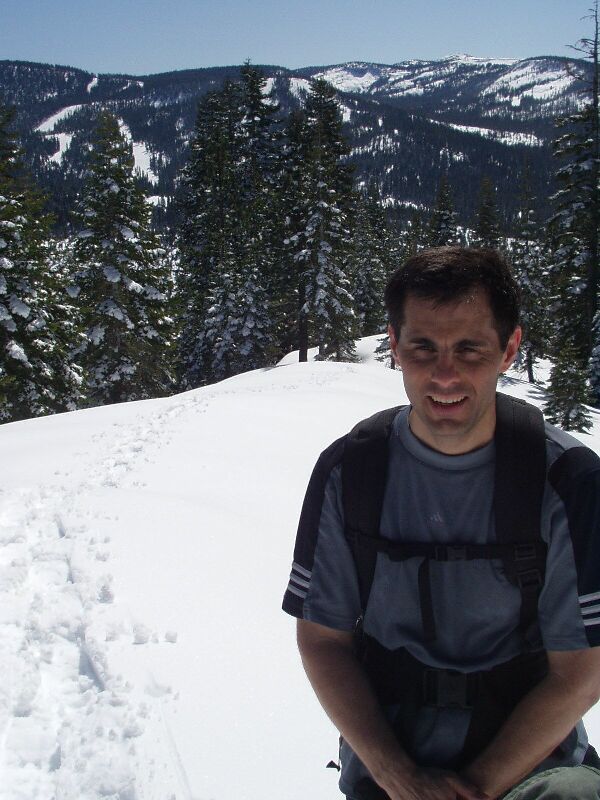 There's a long broad area of gradual uphill, and the summit comes into view. It looks distant and high. It's about noon. Rob suggests a 2:00 turnaround. I counter with 2:30, knowing that the return will be quick. I'm feeling very tired, and secretly don't believe we're going to summit (though our record as a climbing duo is pretty good).

The slope steepens discouragingly. Rob leads, and stays to the right, where there's firmer snow but also a scary cornice-edge. Going first is hard both mentally (because you have to route-find) and physically. Rob seems to have more energy at this poing. It's all I can do to plod along in his footsteps, rationing my scant energy, concentrating on breathing. In the uphill parts I switch to the rapid one-exhalation-per-step rhythm. Then we cross a long flat to the base of the summit pyramid. I gradually gain confidence that we'll summit. 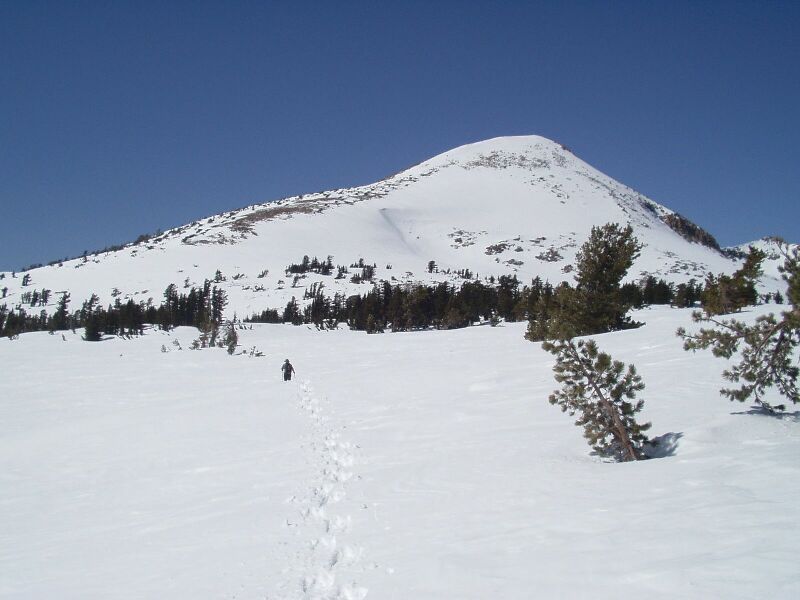 Getting close, sort of. Boulders barely visible on left shoulder of peak. We descended on the snow in front of them.

The summit pyramid has bare patches of dirt and rock, and we grit our teeth and blast up a final snow slope to the start of the dirt. We remove snowshoes, which feels good. There's a final steep stretch of large granite boulders, which would be a walk in the park, except that I'm slightly dizzy and have to stop and rest frequently. But I just keep making one more move, than another, and at 2:35, I'm at the summit, which is snow-covered. Rob arrives soon after. We enjoy the spectacular view, and try to relax and let energy return. 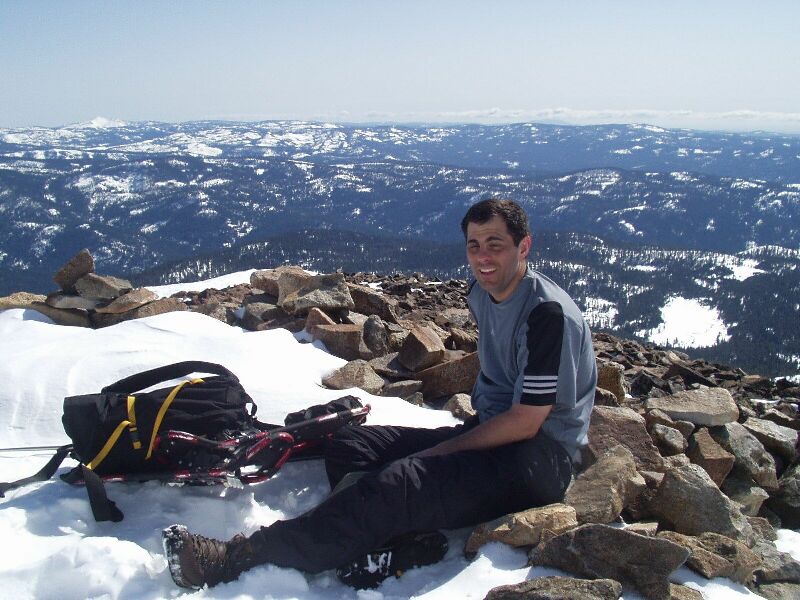 Rob at the top, looking a bit shagged 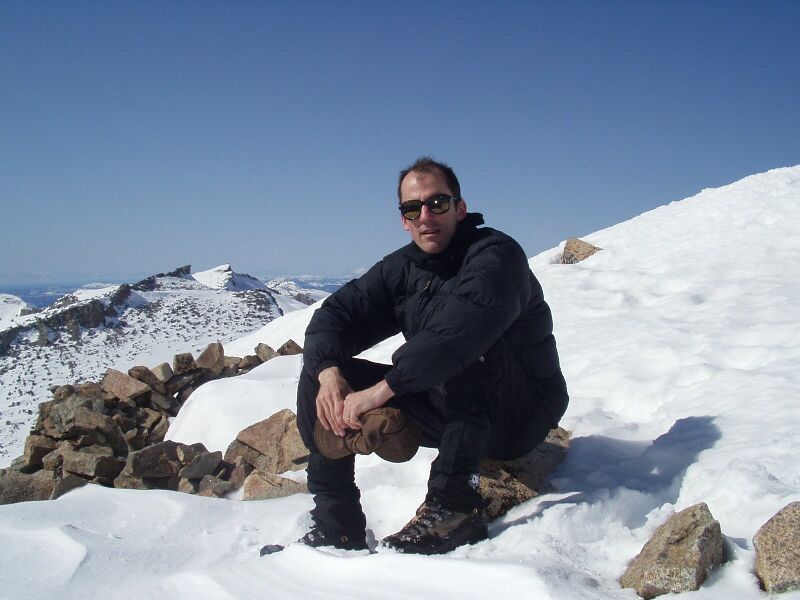 Me at the top, looking suave despite painful granite shard under rump 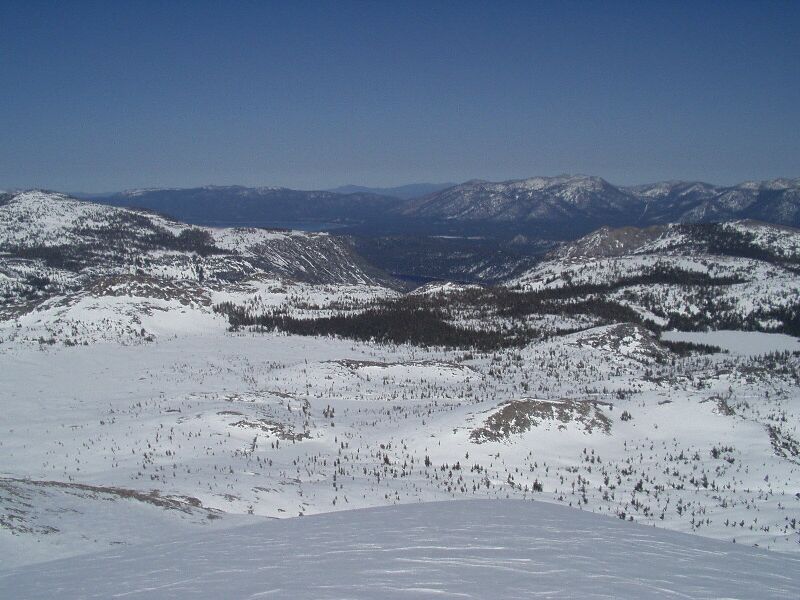 View to the east; parts of Tahoe and Fallen Leaf Lake visible 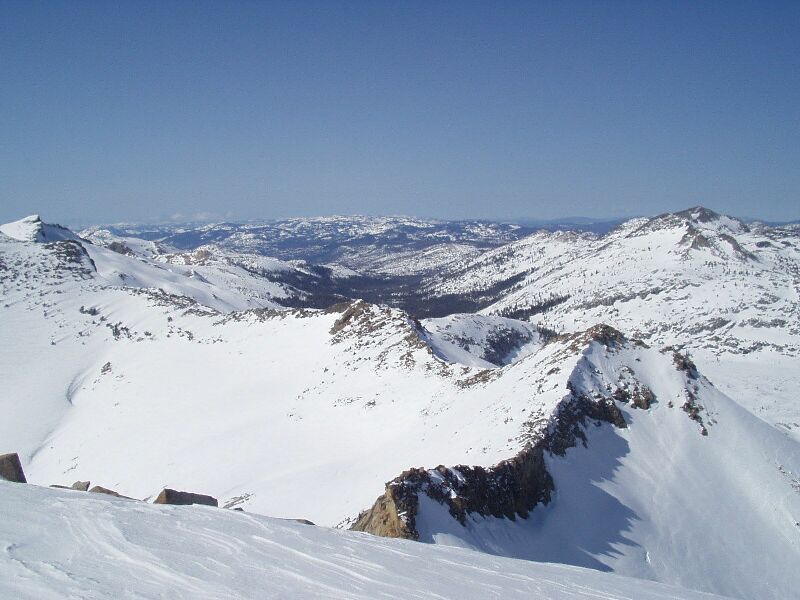 We start down, avoiding the boulders and glissading on a band of snow instead. We pass two groups on the way up, one of them with crampons and ice axes (??). We try another glissade but it's too crusty. I get a scary cramp or nerve-zap running down my back and left hamstring. I do some hasty stretching, and it subsides. My right knee gives off frequent glints of pain.

In the soft snow you can get some snowshoe slide-and-glide, but sometimes you slip to the side and end up lying in the snow. Sometimes you sink in unexpectedly and do a sudden face-plant. It's best to just relax, don't struggle, save energy. This happens with increasing frequency. I start to worry about my ability to make it back. But there's little choice: a bivouac in the snow is not a real option.

We reach the edge of steep part and grab 10 minutes of shut-eye on the warm rocks. Then we head down; I enjoy it, but Rob is falling more than I am. I ask him how he's doing and he says "I'm hatin' it", a clever riff on a fast-food ad slogan. At one point he sinks in to the hip and falls downhill, and spends several minutes digging out.

Finally we make it down to bare rock, which is a relief but still steep and harrowing. Rob does some glissading on the rock (ouch!). The last stretch drags on and on, and I take frequent rest breaks, holding myself up on the poles. Finally the road, the car, and home to bed.

Summary: because of the deep wet snow, the climb is WAY more than we bargained for. It's gone well beyond fun. One good thing: at no point was there any avalanche danger; the route is mostly on ridges and the steepest bits are heavily forested.