Ron K. is visiting from CT, and we decide to do a 3-day trip to the Sierras. I pick a 'sampler' of hikes in 3 distinctive parts of the Sierras.

Ron gets up early and runs the dishwasher to awaken me. I get up, a bit surly. We're on the road around 8:30, and get coffee at Peet's on 4th St. Oops! Forgot my laptop. Back home, then straight through to Twin Bridges.

We hike up the trail toward Horsetail Falls, which brings back memories of my nightime hike a few years ago.

The trail forks a lot and is generally hard to follow. After a few wrong turns, we reach the base of the rocky slope to the left of the falls, which are actually more like cascades. In spite of low Sierra snow-pack, there's a lot of water in the river, and the falls are loud and boisterous. 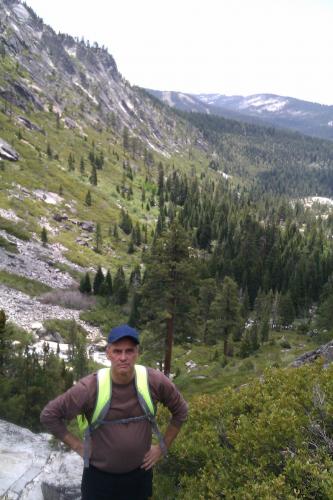 There's no clear route up the rocks. There used to be some spray-painted arrows but they're gone. We come to the 10' chimney which is the crux of the usual route, but it seems hard and dangerous so we take another route (also a little dicey) above and to the left.

There are a couple of other parties, and we follow one of them, on the assumption that they know where they're going. However, this leads us to a place, next to the roaring river, where the only option is to go up a slope of stress-inducing steepness. 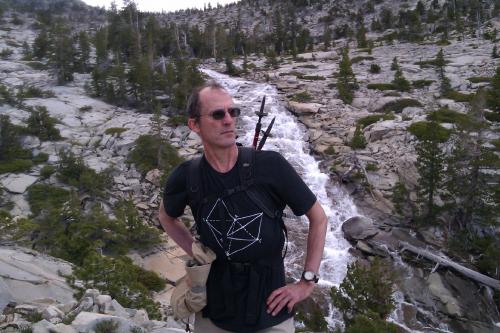 We finally make it to the top of the falls, and take a break. Then, with the help of fallen logs and rocks, we manage to cross the river, first to an island, then to the far shore.

Our goal is Lake of the Woods, which is another mile up the hill, but I'm feeling beat (mostly due to lack of sleep) so instead we lie down on a warm slab of rock and close our eyes for 15-20 min, which is quite restorative.

The trip back down the rocks is physically demanding, but route-finding is easier because the terrain is spread out before us.

After this (and the other hikes) I soak my feet in the ice-cold stream for 10 minutes, which helps to reduce stiffness and pain in my arthritic feet.

We drive to South Lake Tahoe and check in at the Blue Jay Motel, which is near the state line and the casinos. We walk through a couple of the casinos. After a day of vigorous exercise in glorious nature, it's bewildering and depressing to see people hunched in front of video slot machines, pushing a button over and over, without even the tactile pleasure of piles of coins. It evokes laboratory rats and food pellet dispensing buttons. A weathered-looking cocktail waitress with some kind of leg malady limps around, her high heels awkwardly tilted. It's like a Fellini film without the humanity and warmth.

We drive to a brewpub called McDuff's, where I indulge my yen for a juicy hamburger and an IPA.

We walk around a sort of outdoor mall near the casinos, a mostly successful effort to provide an alternative to sleaze. A 70s cover band is playing outdoors; their earnestness and competence are pleasing to Ron. Ron shops for a cap, which he forgot to pack. The stores all carry exactly the same selection of caps, which say "Tahoe" and are cheesy.

I have a no-sleep night but feel more or less OK. Ron gets up early and gets coffee at the casino Starbucks. We get breakfast and lunch food at the Raley's across the street, then drive over Kingsbury Grade and down 395 to Bridgeport - a desolate, beautiful stretch of road for which I have extreme fondness.

We turn off 395 and drive 13 miles to Twin Lakes, a fishing resort and campground at the base of Sawtooth Ridge, site of Matterhorn Peak.

I ask a guy who works there, and he recommends the hike to Barney Lake. This trail starts at the right edge of the campground, borders a lovely meadow, goes through a lush open pine forest, crosses an expanse of sagebrush, then steepens a bit and goes through some aspens, paralleling a noisy brook, and eventually (after 3.9 miles) arrives at a medium-sized lake at the head of the canyon.

We cross paths with an older man, and have a long talk with him at the lake. He's a retired engineer who worked on the Hubble telescope. He lived in Sunnyvale, now retired and living in Murphys. This is his "reference hike"; he failed to finish the last couple of years, turned 80, and did it today. His hips hurt, but he looks very pleased. Ron and I are inspired.

The path has been pleasant but a little boring. We need something more. So we cross the stream on some fallen logs and scramble up a rocky outcrop. I look around and am stunned. The area, maybe 100', is like the most beautiful and perfect sculpture garden ever created. It features swirly dwarf cypress, rocks of various sizes, sprays of grass, little red succulents, and other treasures, arranged in perfectly balanced compositions.

Every so often I have an experience like this, where the artistic beauty of nature permeates and overwhelms me. It happened a few years back in Mosaic Canyon in Death Valley, which I was visiting with Rich Kraft.

Anyway, thunderclouds were forming so we get back down. I have a soft-serve cone from the little stand, and soak my feet.

We check in at the Redwood Motel, have a rest, and drive to Travertine Hot Springs in the hills just south of town. This is a collection of smallish pools of various temperatures, some of them muddy.

There are some tepid pools. A guy says there's a hotter pool down the hill, but he's avoiding it because people are naked there. Ron and I immediately head in that direction. There are three naked women in the pool, but they're leaving, so Ron and I strip and climb in. 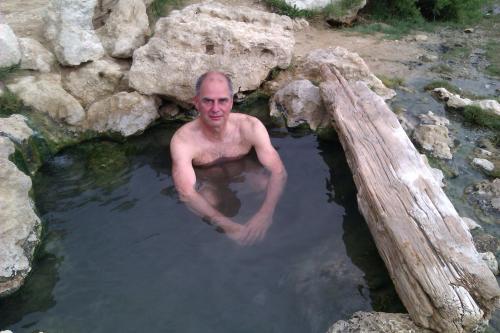 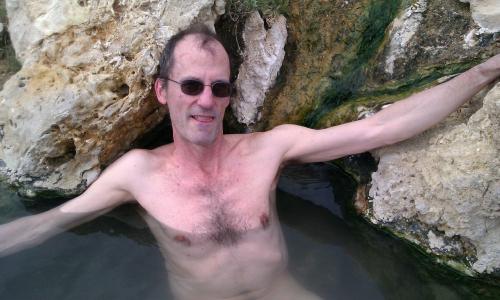 The pool looks out onto a wide valley with the Sierras on the other side, snow-covered peaks as far as you can see north and south. Huge clouds billow over the mountain tops. The sun peaks over the top and shines through gaps in the clouds. Rain arcs downward here and there. The view is reminiscent of (though far better than) the overblown Romantic-era paintings of the Sierras found e.g. in the Oakland museum. 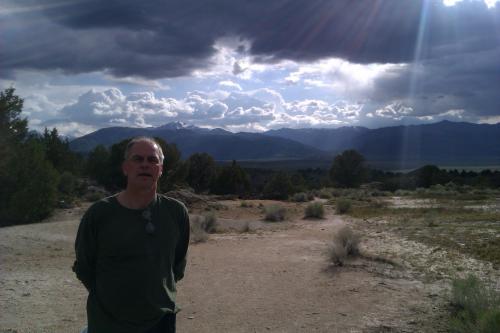 A rotund Indian woman and her son join us briefly; we chat with her and leave. 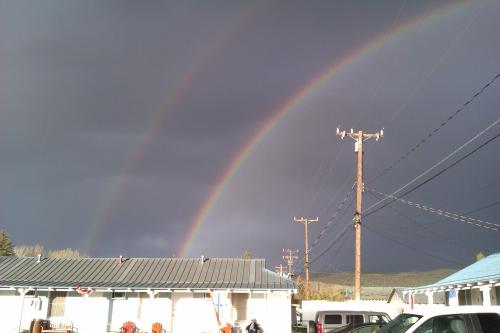 Back in Bridgeport, we go to Rhino Bar, where Dave Gedye and I encountered some feisty desert-hardened women in 2011. But they're not there this time. We get salads and IPA.

We're on the road before 7. Nothing is open so we drive through to the Mobil station in Lee Vining, where Ron has a breakfast burrito of Herculean proportions, and I get the usual breakfast sandwich, which provides lunch as well.

We're both feeling energetic and are free of aches and pains. We consider Mt. Dana, but it's snow for about the top 1,000' so it's not feasible. We decide on Mt. Hoffman instead. We drive to the May Lake trailhead and are hiking by 8:45 or so (Ron, like me, is very efficient at packing up, getting ready to hike, etc.).

It's a beautiful day. A bit on the cool side, and some wind on the ridge above May Lake. We're on the summit by about 11. The summit block is a slight challenge for Ron, and I mull over its suitability for Noah later this summer. 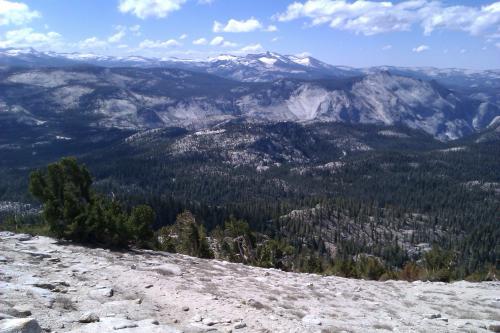 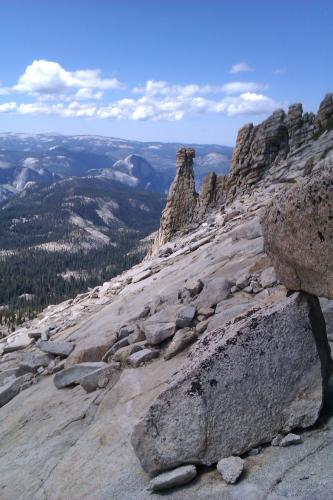 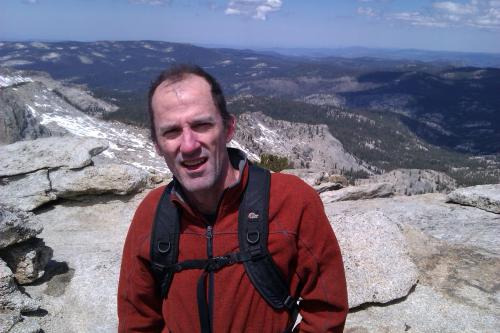 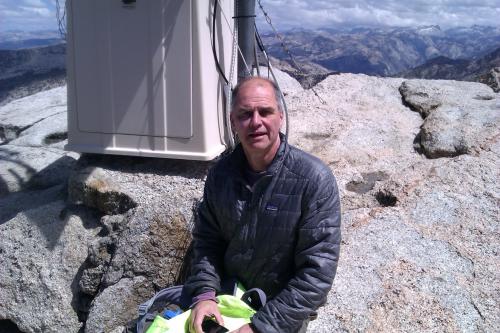 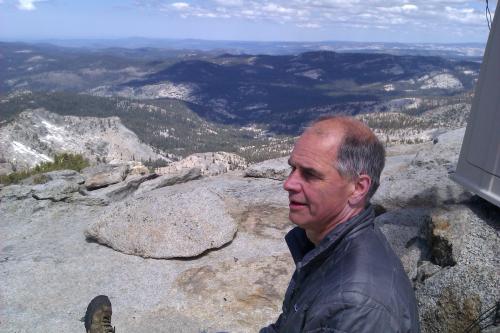 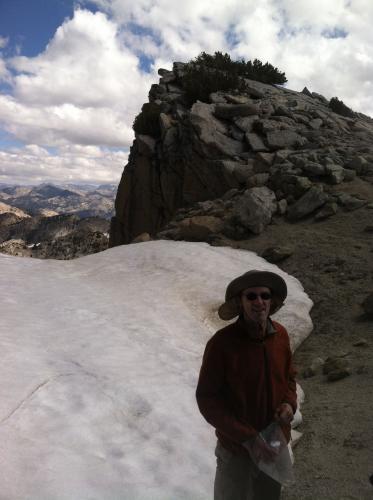 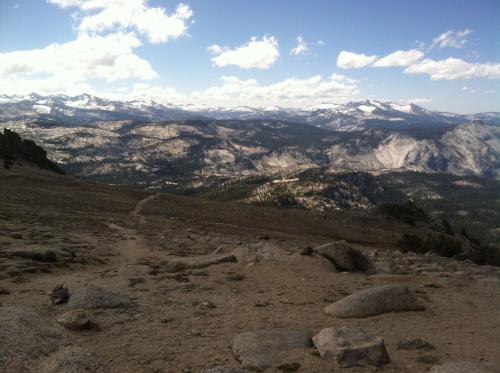 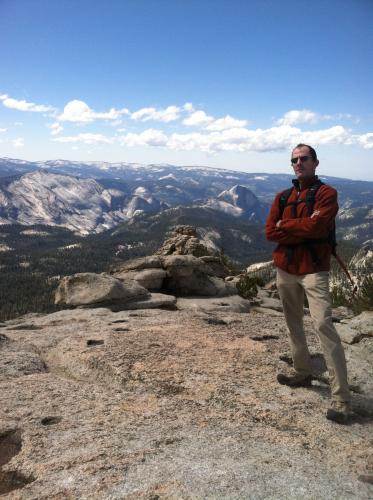 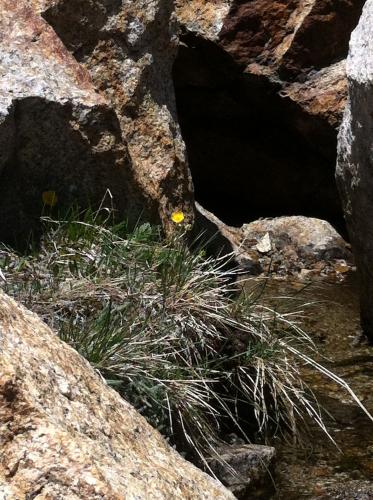 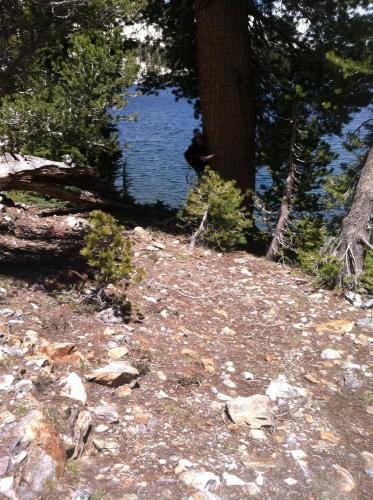 I propose taking the other route down (east side of the mountain) and we cross the plateau to investigate, but there's too much snow so we return on the path. 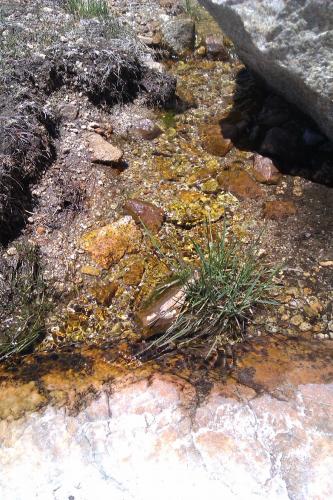 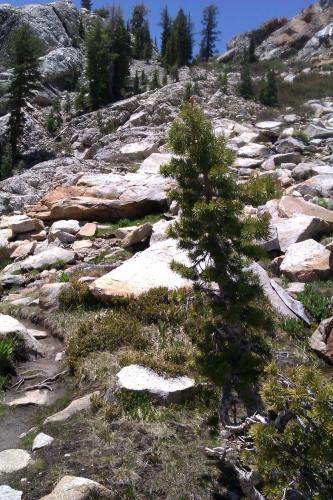 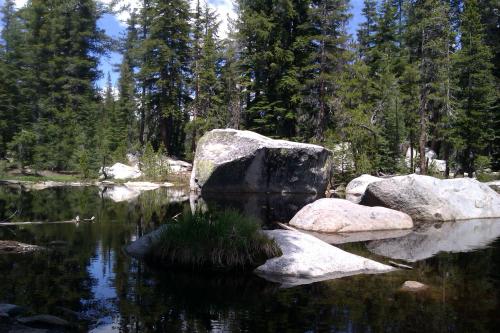 Pond at the trailhead

We're on the road before 3. There are some issues with the front bumper of my Accord, which we fix with duct tape, but only temporarily. There's a scary moment when my brakes fade badly at the bottom of Old Priest Grade.

We're supposed to be in San Jose to visit James McCartney by 7, and we would have made it except for navigational chaos caused, it must be said, by Ron's lack of preparation. His plan for finding the house was to go to San Jose and "ask at a gas station". We check out James' nonstandard piano and Roland analog synth, and hear about his new DSP programming language. We're home by 10 PM. 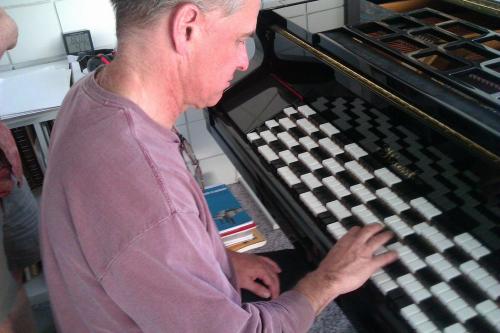 All in all a great trip, and hopefully a warm-up for bigger hikes this summer by both me and Ron.

Health report: I worried about the possibility of sciatic pain and/or arthritic foot pain, but neither happened. I took prophylactic ibuprofen, and stretched. The other issue was my premature ventricular contractions (PVCs), which have become more frequent recently. I'm not sure whether PVCs were happening during climbing, but my heart felt a bit abnormal, and I felt that my pulse (rather than respiration or muscular lactic acid) was the limiting factor in how fast I could go. It's also possible that I need to get more regular aerobic exercise.