I organize a trip to Mt. Shasta with my friends Ron Kuivila and Dave Gedye - a reunion of our randonee ski adventure in 2003.

Shasta is not to be taken lightly. I started training for it a couple of months ago, but then got a cold that didn't go away, and sapped my physical and mental strength. I couldn't do significant exercise. But I decided to go to Shasta anyway and do whatever I could.

Ron and I drive to the town of Mt. Shasta, stopping at Granzella's in Williams for disappointing sandwiches and good oatmeal cookies.

Normally you can see Mt. Shasta from 50 miles away, but today it's cloudy and we don't see it until we're close: bands of snow and rock peeking through high-up gaps in the clouds.

We check in at the Swiss Holiday Inn on the southern outskirts of town. We explore downtown Mt. Shasta, where everything is unique and a little off center. A crystal store has a screed posted in the window satirically denouncing a hoax involving 13 crystal skulls supposedly from South America, describing it as a craven ripoff that undermines the reputation and integrity of legitimate crystal dealers.

Across the street, a former gas station houses a competing crystal store, which also offers "Soul Path Readings" and claims to have the "13th Maya skull". 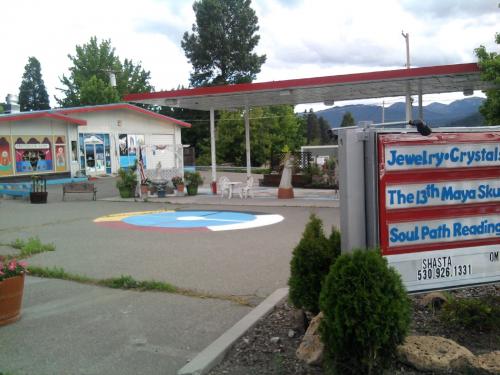 We have dinner at a bad Mexican restaurant (Don Ramos), then go the liquor store and buy a six of Eel River IPA, which tastes OK for first 3 sips, then magically changes to stale piss.

We have breakfast at the motel, which is unexpectedly good - i.e. there's cut-up fruit and hard-boiled eggs as well as the usual cellophane-wrapped danishes, raisin bran, etc.

We get a good view of the mountain. Due to low snowfall it's mostly bare: no snow up to Helen Lake, narrow bands of snow up Avalanche Gulch, and no snow on Misery Hill.

We drive to Bunny Flat, hike to Sierra Club hut at Horse Camp, and continue up Olbermann Causeway (a long row of boulders) to a hill at the treeline. 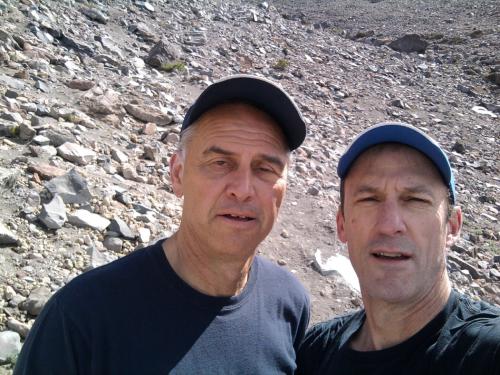 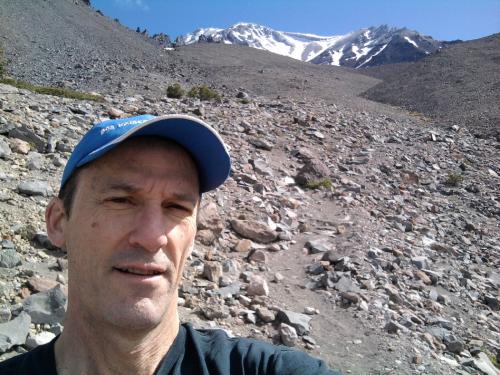 We descend to Horse Camp. DA sees a slim, 50-ish blond hiker entering the hut, quickly follows, and strikes up casual conversation. The woman (Susan) is from Colorado and is in Mt. Shasta to attend a Tango festival in McCloud. On hike back to car, DA regrets lack of business cards.

Ron visits Shasta Base Camp, an outdoor supply and rental store. A tall, other-worldly young man describes the crampon options. Ron imagines him as the John character in a Shasta-based John from Cincinnati: the skis he tunes would impart magical powers.

After leaving, DA spots a bright pink cowboy hat sitting on a rock. Ron appropriates it and later wears it on the flight home.

Gedye arrives at 1:30 PM in a Cooper Mini with a circle-based interior and mood-light touches. We have lunch at the "Poncho and Lekowitz" Mexican food stand (excellent). Ron and DG get a burrito alarmingly called "The Big Nasty".

We have a leisurely afternoon at the motel. Ron and DA soak in the hot tub, soon joined by the pre-teen daughters of the Hispanic motel owners, and their friends. Ron decides they could be the chorus from his "John from Cincinnati" spinoff. The motel owners have 5 kids ranging from toddler to teen, for whom the motel is their private summer camp.

We drive into town, get food at the grocery store, then dried food Fifth Season. DA buys moleskin.

Dinner at Mike and Tony's. The minimalist presentation of Ron's chicken parmesan makes it resemble a chicken schnitzel. Ron and DG have margaritas and post-dinner brandy. We revisit the liquor store for a DG whisky purchase. 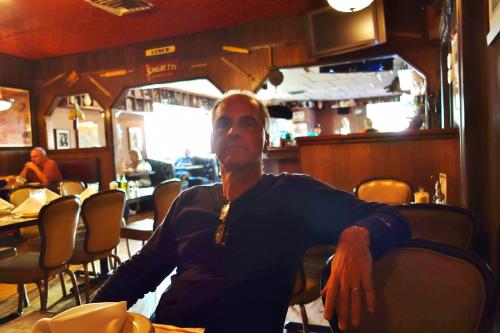 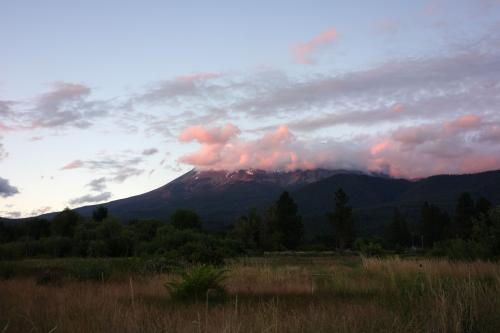 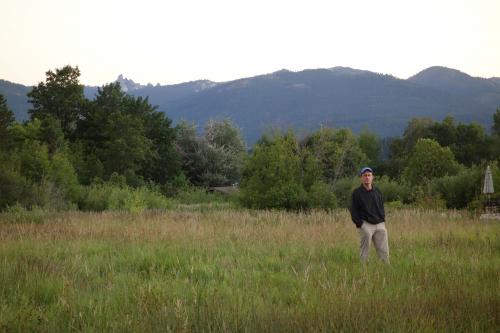 Ron and DG convince DA of the need to locate the tango-fest and the enigmatic Susan. We drive in the Mini to McCloud (population 1,101). A large building is labeled "McCloud Dance Hall" - bingo! DA convinces the ticket-takers to let us watch for 10 min. Roughly 100 people (more women than men) are doing ballroom tango with varying levels of skill. The event is called "Burning Tango". Ron observes a teenage couple dancing; the girl is wearing glasses and looking at the floor; he ponders adding Twin Peaks elements to his TV show, now called "Shastina" (DG suggests this title, based on Buddhist aphorism "climb the 2nd highest peak, because the view is best from there").

DA circles the dance floor, feeling the hopeful gaze of the many wallflowers. He eventually locates Susan, who fails to recognize him, but graciously converses.

On the drive home, Ron and DG wax rhapsodic about the charm of the event; the shy but unembarrassed enactment of Tango, directed at execution rather than appearance or competition; the home-grown social structure, outside the grasp of corporations and religion. We return to the motel, finish the bad beer, and retire.

At breakfast we have a long conversation with a talkative woman on religio-spiritual tour of Shasta area. We have coffee at groovy place on way to town, and run into same woman again! Ron picks up boots and crampons at Shasta Base Camp.

We pack our gear. Ron has graciously agreed to carry the tent we're going to share. 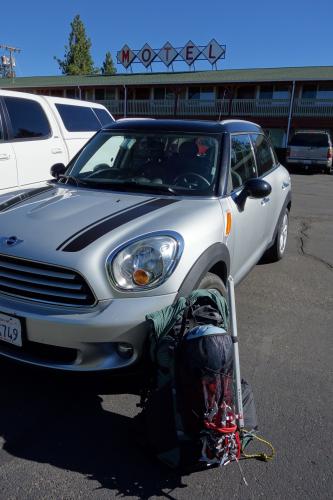 The weather is beautiful - cloudless, 60s. 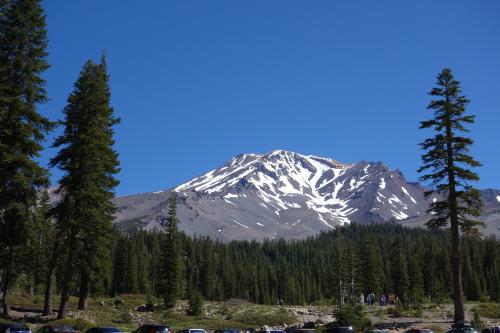 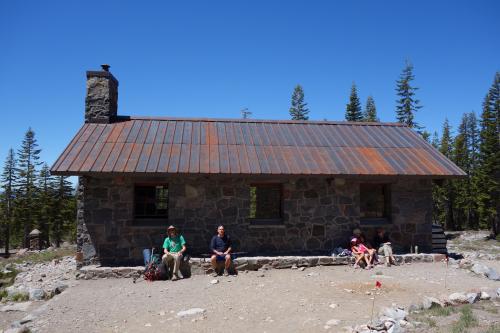 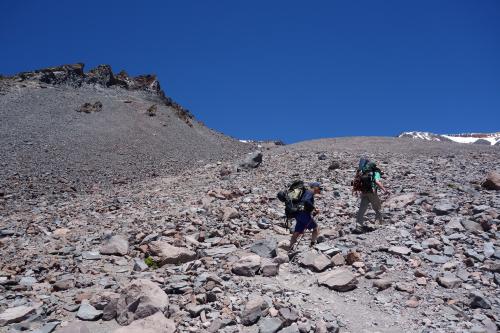 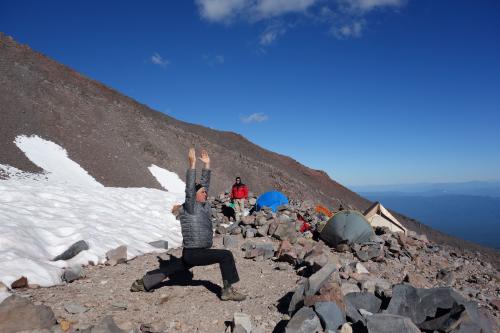 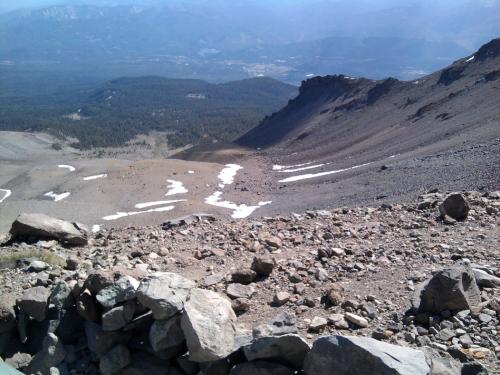 View from tent site; other tents faintly visible at 50/50 flat 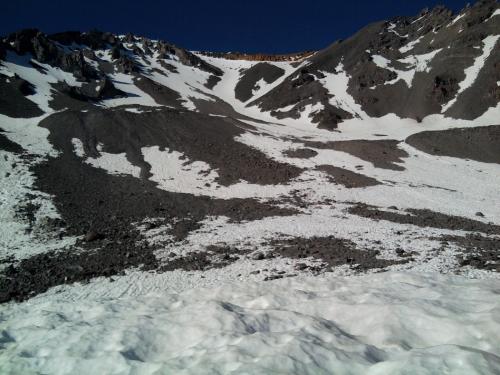 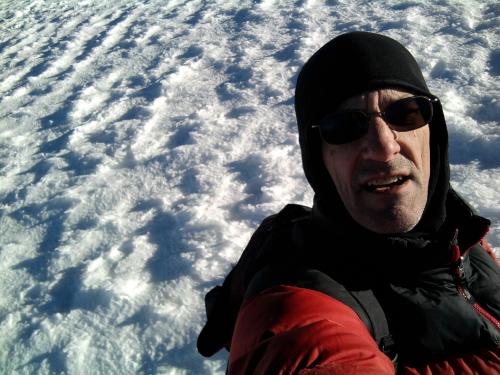 2:30 AM wakeup. Beautiful stars, Milky Way clearly visible. Coffee, oatmeal. On the road at 3:15 AM. No moon, but enough light to see snow. A couple of parties ahead of us. 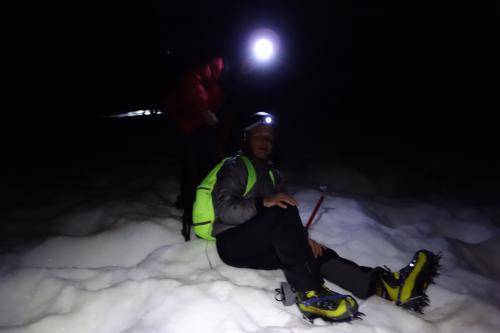 The snow is extremely corrugated - 2-foot deep suncups, troughs, melt around rocks; we try to walk on the high points.

We get up into Avalanche Gulch. The snow conditions make climbing difficult; it's hard and icy, deeply rutted with glissade tracks in places, smooth in others; neither is ideal for climbing.

In spite of this, we make good progress. Ron dislikes his rigid plastic boots, which don't allow ankle flex; the only good walking pattern is a herringbone on either side of a ridge.

DA feel effects of recent sickness; lack of balance, weakness. DA has to lean forward and put hand on snow often; half-crawling up the slope. 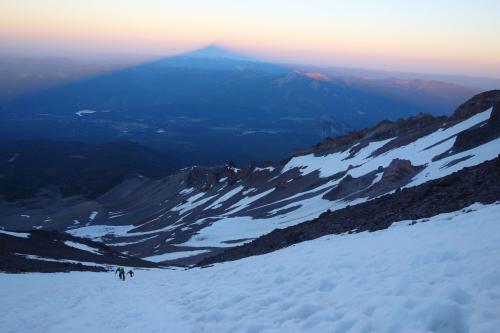 Shasta casts a vast triangular shadow to the west. Ron senses the crystal energy aura of the mountain. 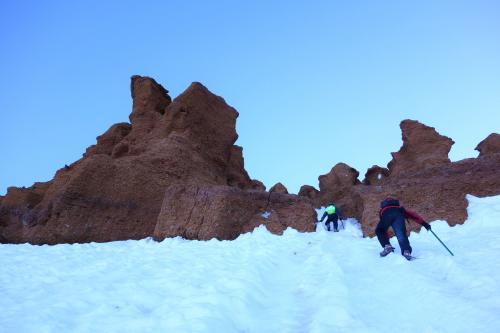 Is my butt really that big? 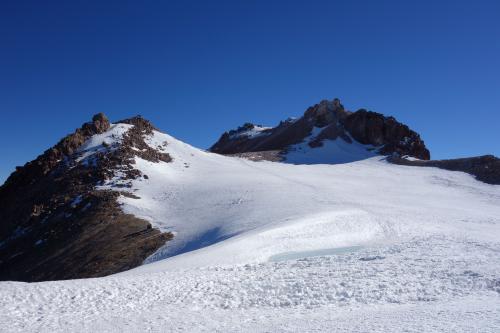 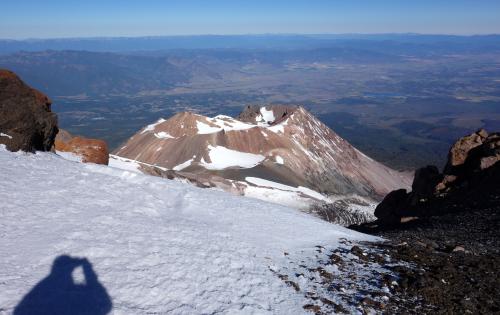 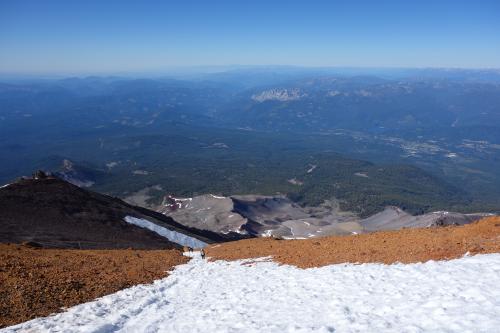 Looking back down to Red Banks

Snow conditions don't allow glissading, so we need to descend 3,500' by foot, sidestepping or straight walking, both of which require a tremendous expenditure of energy and put a lot of stress on quads. Halfway down gulch, DA becomes exhausted: shortness of breath (touch of asthma), slight nausea. There's some rockfall - softball-size rocks whiz past at high speed. Must get down quickly. DA resorts to mental games to keep going - 20 steps, then rest. Repeat ad infinitum.

DA staggers back to camp at 10:30 AM, collapses in fetal position in tent. Every movement causes gasping for air. Severe anxiety about descent to car.

DG arrives at noon, Ron shortly after. Both have a brief lie-down, then spring back to life and break camp. DA uses poop bag for first time in life. Forgets to bring TP, tears up 2nd paper bag for this purpose.

Descend to 50/50 flat. DG goes ahead because he needs to catch a plane in Medford at 7 PM. DA asserts that DG summited in principle. DG denies this, but proposes that it's disrespectful to summit a mountain on the first attempt.

Ron and DA walk like old men, one painful step after another. Passed by everyone, including two Japanese women, one with a beautiful burnt-umber long dress and large straw hat. Olbermann causeway evokes righteous indignation; stones require big effort to descend, and seem to go on forever.

Stagger into Horse Camp. Long chat with Sharon, caretaker of Sierra Club hut, who gives us hard sell for camping at Horse Camp instead of Helen Lake.

Normally talkative Ron is reduced to pre-verbal state of grunts and moans. Stop at gas station for restorative Gatorade. Brief holdup on freeway due to bridge work. Listen to Jaco Pastorius, Bitch's Brew. In Berkeley by 9 PM. Slices to go from Rotten City Pizza, washed down w/ cold beer back home. Bodies are feeling surprisingly good.

Summary: this was one of my hardest physical ordeals, in part because I was sick and lacked my usual energy reserves, and also because of the need to walk rather than glissade down Avalanche Gulch. Halfway down the Gulch I had reached my limit; I had nothing left, and I wanted to be home and in bed. But I had no option: I needed to figure out a way to keep moving.