Noah and I drive to Mono Lake via Tuolumne Meadows. At about 5 PM we stop at Puppy Dome to rock climb. I climb to the top of the dome, set an anchor using the bolts there, and toss down the rope. We hike up to the climbing ledge. Half the rope has tangled and doesn't reach the ground. Yanking the other end doesn't help. That's it; I climb to the top and pull up the rope. It's too late for a second try.

Side note: I've apparently come down with chronic fatigue syndrome over the last several months, which casts a pall over this trip. I'm bone-weary and physical movement is an effort. But we've planned it for a while and Noah is looking forward to it.

We camp on BLM land, at the same place (I think) as our trip with Tara and family last summer. 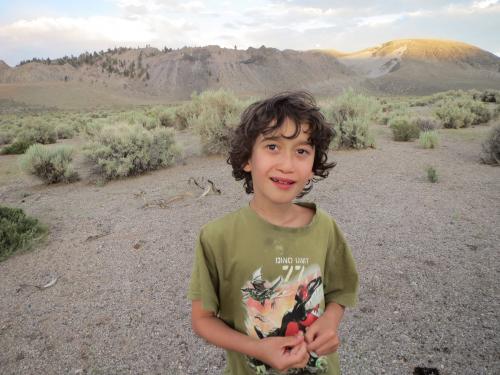 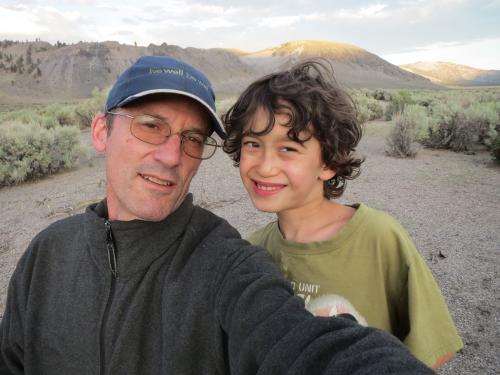 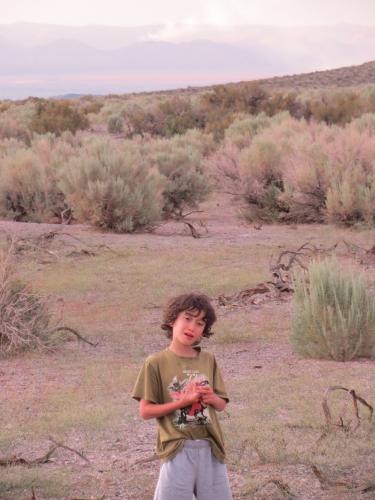 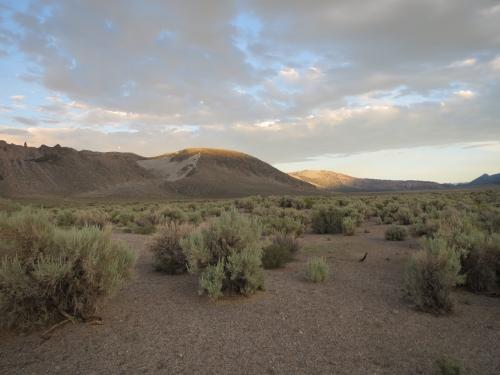 Noah spends most of his time 'letting out energy'. 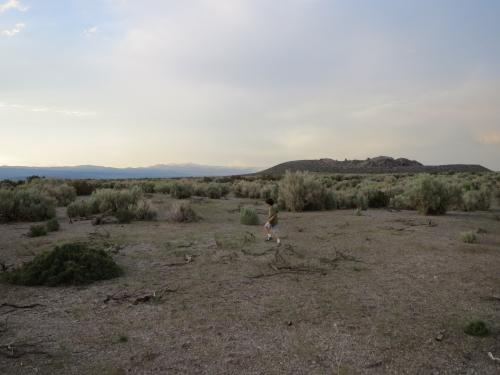 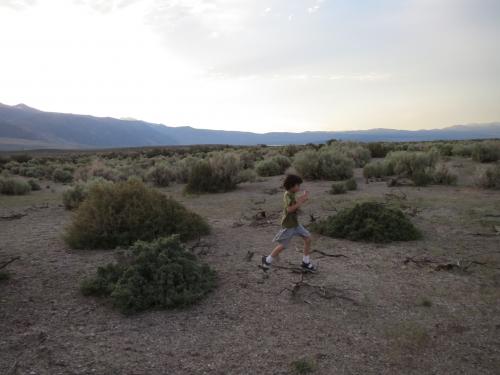 A sliver of Mono Lake visible in background 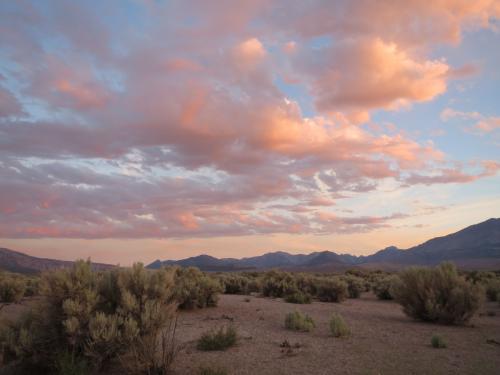 We make a campfire with sagebrush wood, and make s'mores. 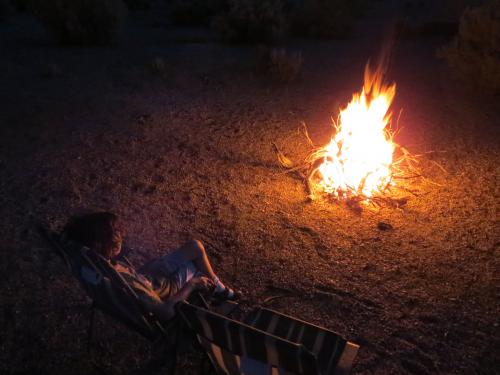 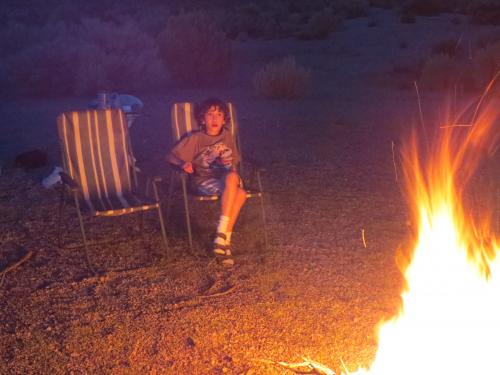 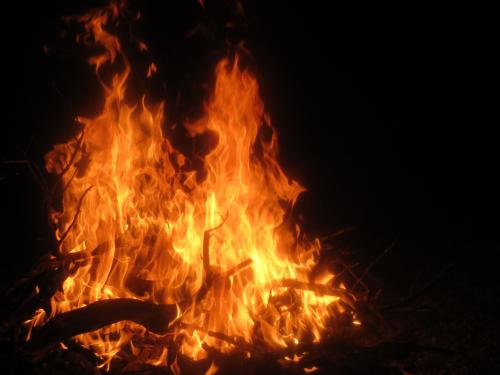 I sleep well, having brought my 3" memory-foam mattress. We have instant oatmeal and coffee for breakfast. We drive up to Tioga pass, up the dirt road toward Saddlebag Lake, and park at the Sawmill walk-in campground. Then we take the trail toward Mt. Conness. 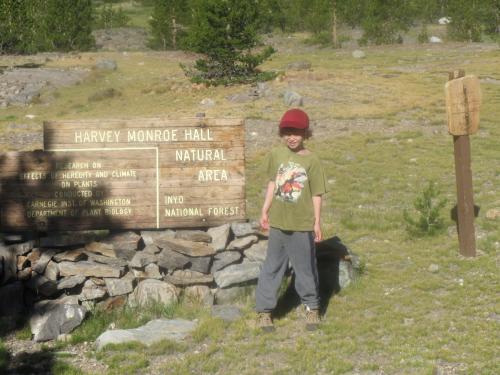 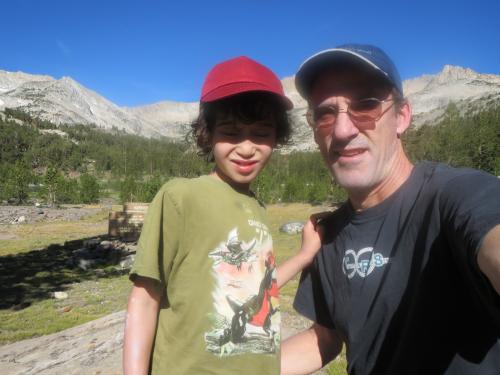 We walk on the trail toward Alpine Lake, then turn right up a steep valley, at the top of which is a false summit.

Note: at this point the pictures become blurry. I had let Noah take some pictures; when I returned home I found a greasy Noah-size fingerprint on the lens. 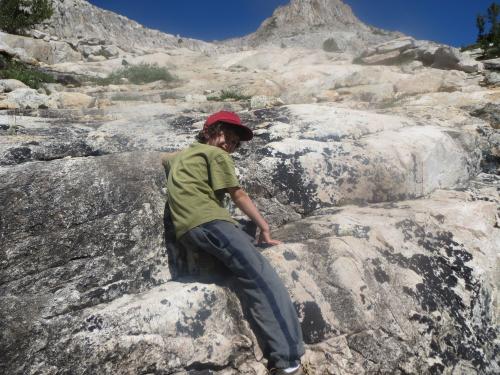 It involved some walking up slabs

We turn around at a flat area (sometimes a tiny lake) at the top of the valley. I think we're a little above 11,000' at this point. 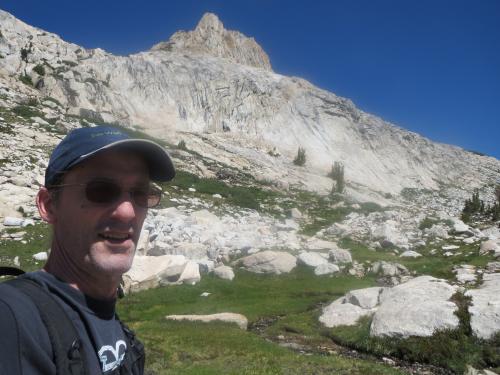 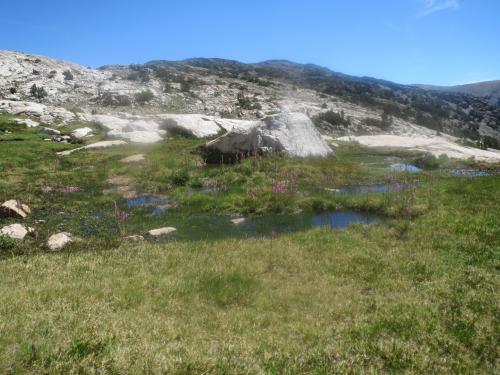 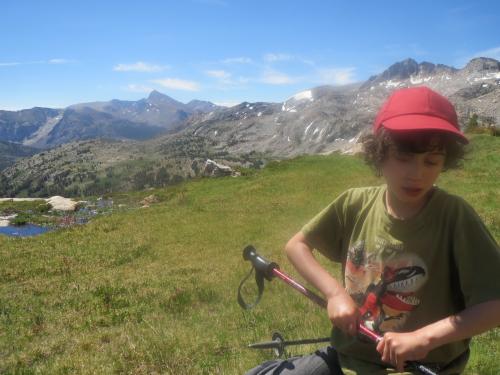 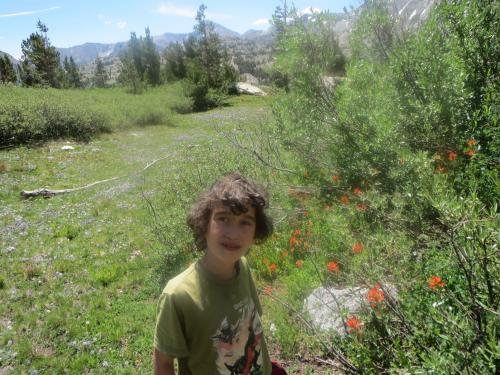 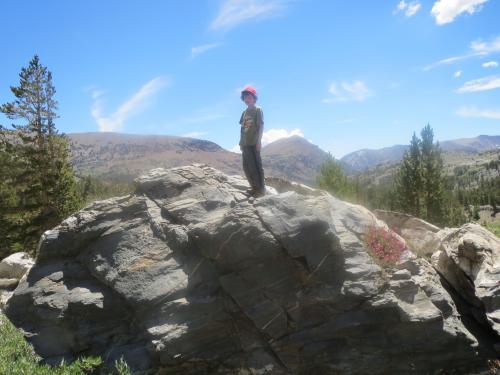 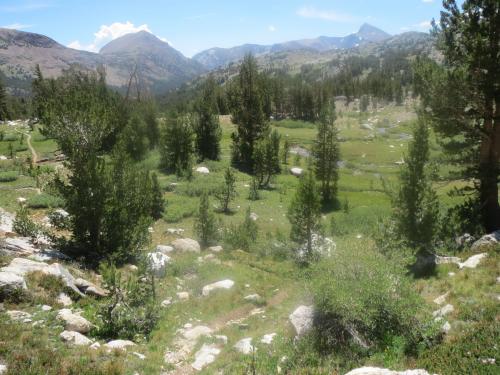 Gorgeous alpine meadow; too bad about greasy fingerprint on lens 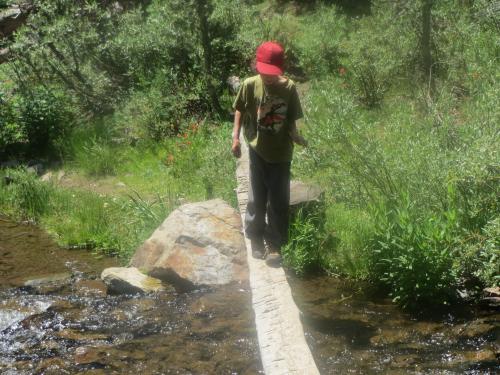 Noah found this scary but fun

We drive back to Lee Vining and have a hearty lunch at Nicely's.

We explore the canyon above Lee Vining, which has always intrigued me while driving down the road along its steep northern slope. It's very beautiful. A lot of aspens. The Lee Vining creek runs down it, with some cascades. It has a couple of no-reservation campgrounds which look promising. At the top, where the road ends, is a small hydroelectric power plant, which seems to be in operation and looks like something out of Myst.

Rain clouds are moving in. We return to camp around 3:30 and it starts to pour. We dash to the tent and spend the next 2 hours there. The tent is not quite watertight.

The rain lets up; it's cool and breezy. We have supper (noodles and leftover chicken). We try to make a campfire; unsuccessful due to wet wood. Early bedtime.

We get up at 6 AM, break camp, and go to the Mobil station's Whoa Nellie Deli for breakfast. I have their 'breakfast sandwich', which is staggering: a 2-egg omelette on a large buttery croissant, with 3 strips of bacon, lettuce, and tomato.

Out goal: Mt. Hoffman, which we climbed last summer except for the last bit. We discuss the concept of 'summit fever', and Noah announces that he has it bad. We drive to the May Lake trailhead and are hiking by 8:25. My energy level is higher, or maybe I'm just used to being fatigued. We reach May Lake in 40 min, stop briefly, and continue up. 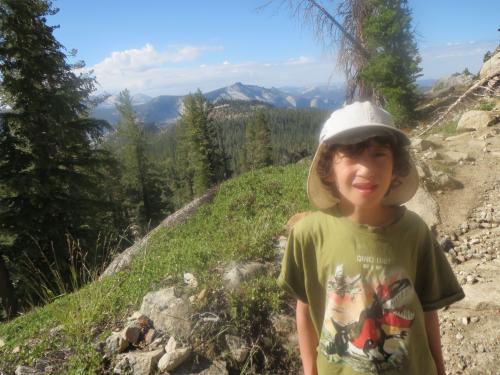 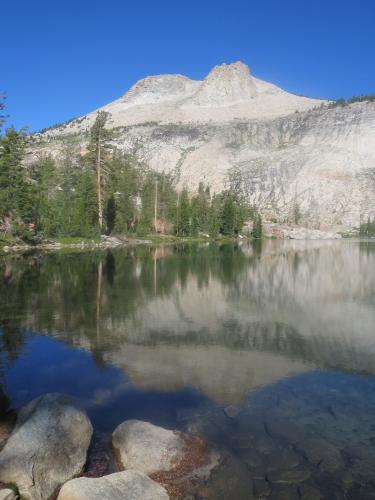 May Lake. Mt. Hoffman in background, though summit is not visible

The day started off nice, but storm clouds are moving in. We hear thunder several times. About halfway up, some descending hikers say that a ranger told them to go down. This seems like a good sign that we should turn around. Plus the wind has picked up and it's cooled off. After a few minutes it starts raining lightly. We speed up - me walking at top speed, Noah jogging. 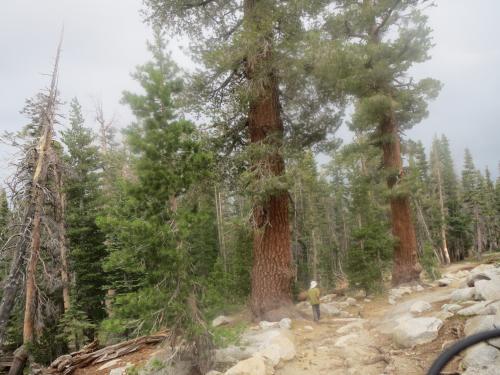 We reach the car and start driving. In short order there's a torrential downpour that lasts for quite some time.